It’s been three years since Google’s first “Pixel Buds” made their way out, and while they weren’t amazing, Google’s back for round two. Could the 2020 Pixel Buds — the Pixel Buds 2 — be the AirPods that Android owners have been looking for, or is there still something better?

It can be all too easy to forget that phone makers also experiment in earphones, but it happens, and these days more than ever. Apple makes the iPhone and the AirPods, Samsung makes the Galaxy phone and buds, and Realme even has a hand in each as well.

You might look at those brands and wonder what’s missing, and then have it dawn on you: Google.

The maker of the world’s biggest mobile operating system not only has phone, tablet, and computer hardware, but also smart speaker and smart displays, as well. So where are the Google earphones?

They once existed, but haven’t for some time, yet are now back once more. Arriving as the Pixel Buds in 2020, it’s a second take for the line, and one that hopefully make the Pixel Buds better. Seriously, that wouldn’t be hard. 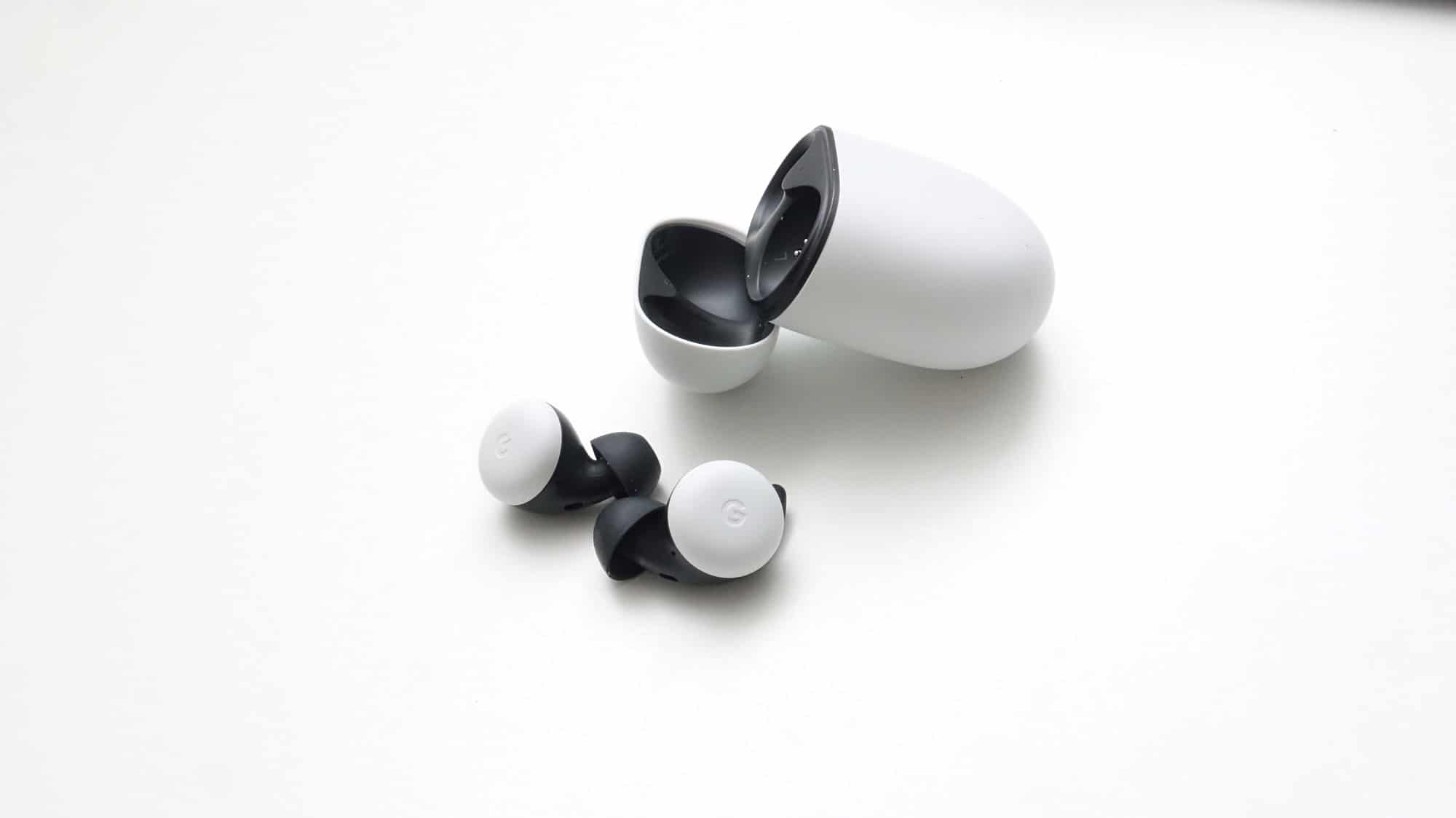 Totally different from the first generation, Google has changed approaches entirely. What was previously fabric-focused with cords is now plastic and small, as the times have changed. However the focus is still on something small and with some very modern parts.

In the 2020 reinvention of the Pixel Buds, you’ll find a somewhat consistent approach to in-earphones, resembling something more like what Jabra puts out, but with a single earwing that you twist to fit your ear. It might fit some ears more comfortably than others, but there are at least three tips to choose from, with small, medium, and large, though no bi-flange (though they seem fairly interchangeable with other tips should you want to bring others over).

You even get a tiny charging case that can get its charge either through the Type C USB standard or via the Qi wireless charging standard, giving you some options for powering the earphones up.

However Google is breaking from other brands here by adopting a touchpad controller, different from the typical button approach. Only a handful of earphones have gone this way, including the Sony WF-1000XM3 and the Apple AirPods, but the Google Pixel Buds in 2020 have it, as well.

You’ll be able to swipe forward and backward for volume control, tap and double tap for play and skip track, and then use the app for Android devices. On Google Pixel phones, the app is built into the operating system, but on Android you need to download the app.

That’s easy enough there, though on iOS, it doesn’t exist. You can still use the Google Pixel Buds with an iPhone, you just can’t change the features, like switching on Adaptive Sound or checking individual earphone battery life.

Of course, the most important part of any earphone review is how the things sound, and so like we do regularly, we’re turning to the Pickr Sound Test for our Pixel Buds review.

Starting with electronic music with Tycho and Daft Punk, the sound is comfortable and can appear balanced, at least at a first, though it doesn’t take long to see where the balance gives away: the bass.

In electronic, you may not notice the absence of the bottom end at first, and it was comfortable enough, but the moment you make your way to music where the bass hits haven’t been overly pronounced, you’ll hear it, or more specifically, you won’t.

Granted, it can be difficult to decide how to handle the bass in earphones and headphones, and some go well over where they need to, while others try to balance the result. Google’s 2020 Pixel Buds feel like they’ve tried to sit in the last category, but have missed the mark almost entirely. 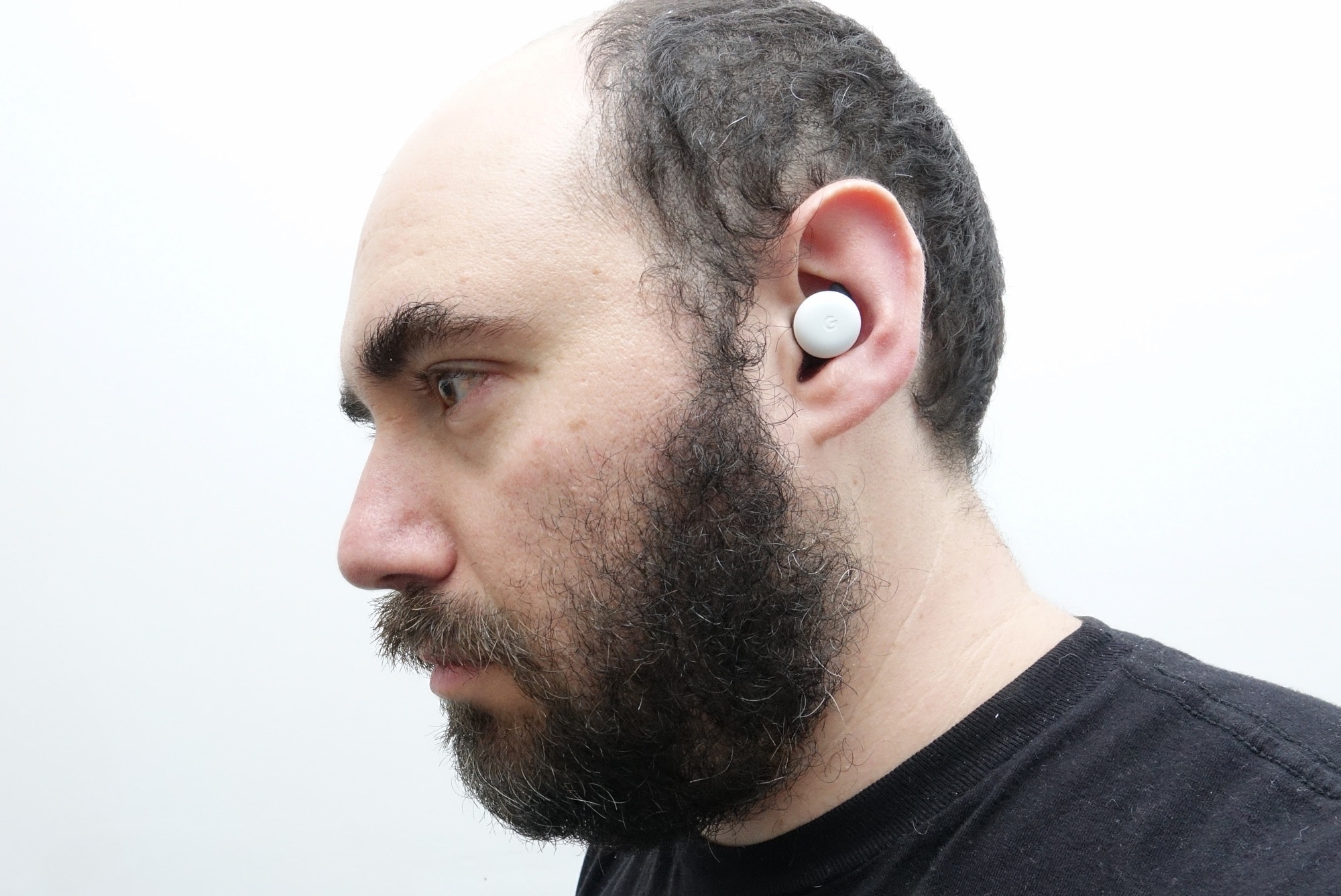 You feel the lack of bass in pop, as the punch of Carly Rae Jepsen’s “Cut To The Feeling” lacks any actual punch, feeling instead like a light tap you could ignore rather than soak in. Only in very modern R&B did the bottom end feel relevant, and soulful tracks such as Marvin Gaye’s “Ain’t No Mountain” just lacked the round bass we looked for. It’s so subtle at points, you’ll wonder just where exactly Google has placed it, and the answer is “not here”.

It was a similar effort in rock and jazz, while classical — which can lack the big bass — managed to feel comfortable and balanced, only because pieces aren’t always guaranteed to cater for the bottom end.

That overall lack of bottom end is hard to look past, and pops up specifically in older tracks, but even newer ones. We were surprised just how flat Maroon 5’s “Animals” came across with the 2020 Pixel Buds, basically dulling the overall song. Even Ariane Grande’s “Into You” failed to get into us for what must have been the first time.

The reduction of bass seems like a risky move on the part of Google, and one that hasn’t quite paid off. It’s there for some tracks, sure, but the vast majority of what you push through likely will come off feeling a touch flat and boring, which isn’t amazing. 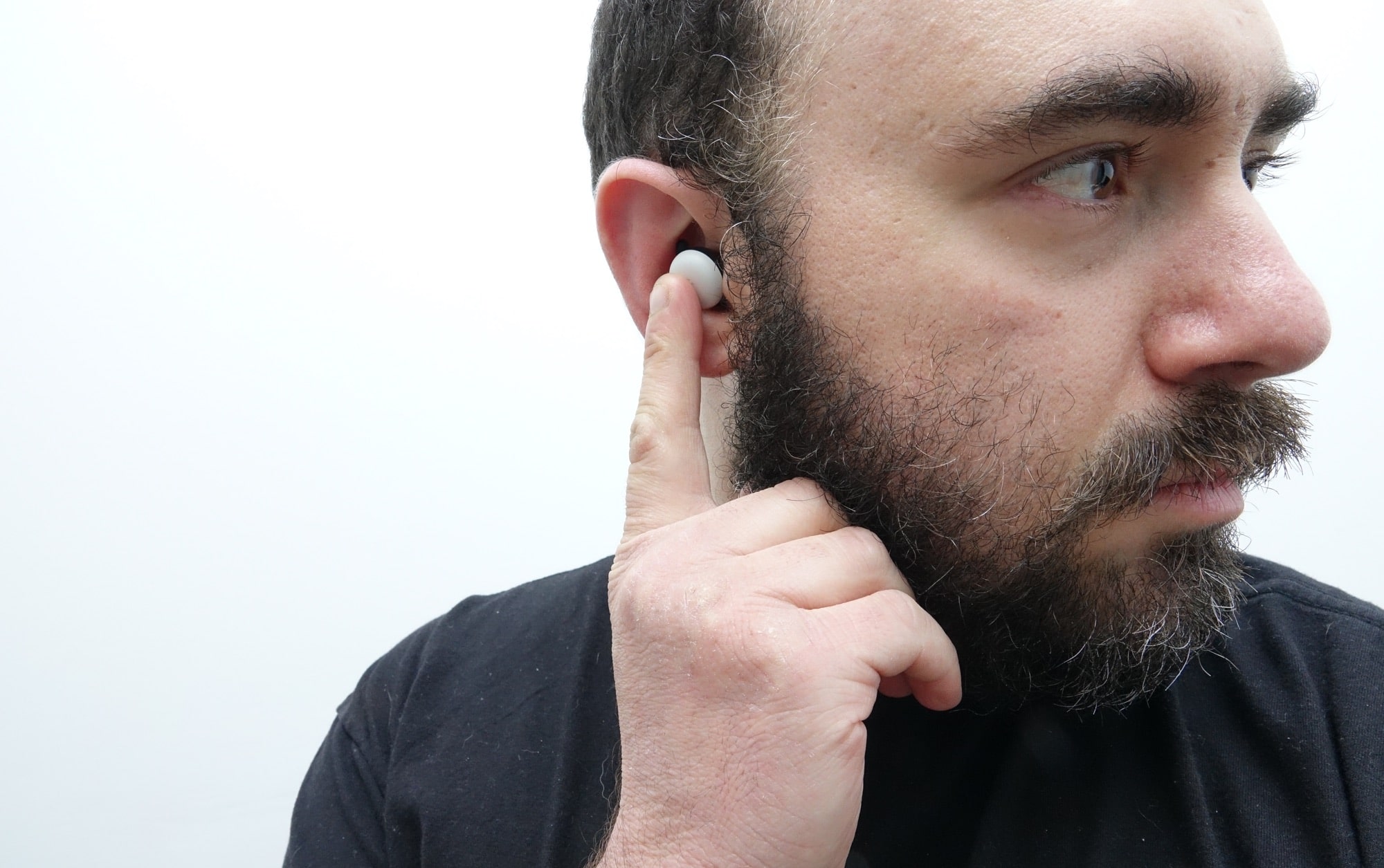 Also not on the side of amazing is the battery life, which is what we’d call ordinary for these days, but nothing stellar or amazing. It’ll depend on what you’re doing, but for the most part we found three to four hours per charge, though there’s a good four more charges in the case.

These days when we’re seeing truly wireless earphones able to push up to nine hours, we might be expecting just a little more from Google here, much like we do with water resistance, which is also lacking.

We’ll call a section just for this, simply because Google is highlighting a section, but it’s not remarkable. Instead of the IP54 or IP57 ratings you can find on some of the Pixel Buds’ competitors, you’ll see this one top out at IPX4. That’s essentially sweat resistance, but hardly water resistant, and so there’s more we think Google could have done here.

At $279, the reinvention of the Google Pixel Buds seems fairly solid, providing an approach not far from Apple’s AirPods, but with a grip that’s less likely to divide.

The sound quality isn’t bad, and you get wireless charging and water resistance thrown in for under $300, so Google is definitely hitting some results there, but it’s not all hunky dory, and there are some omissions that give us pause on the price. 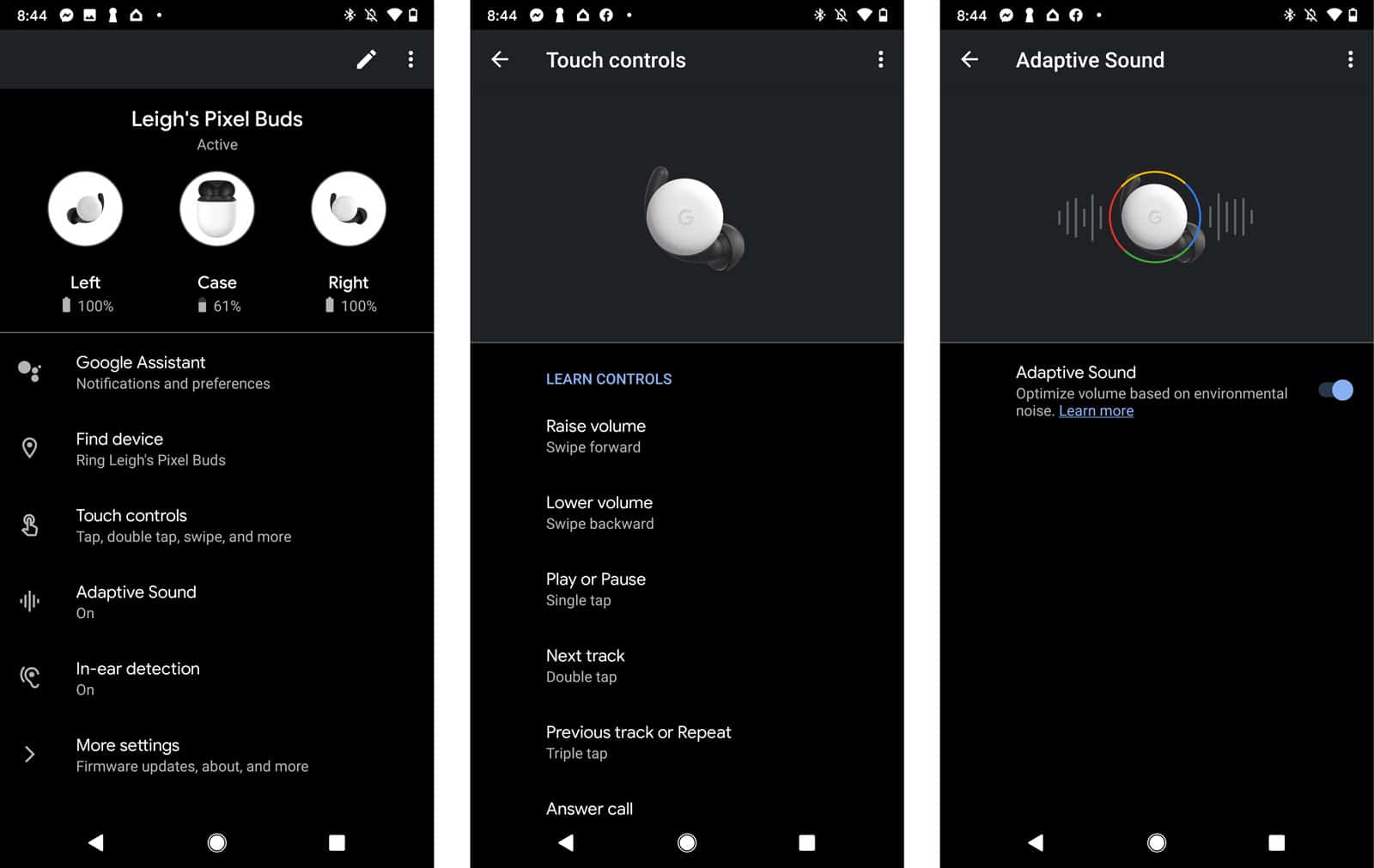 One of these is a lack of an app for iOS, which just seems like a starting omission from Google.

Google makes apps for iOS, and the Pixel Buds support either operating system, clearly preferring Android to Apple. But there’s no reason why they have to, and Google should have an iOS app for iPhone users to use, too.

The bass clearly needs some work and falls flat, as does the adaptive volume mode, which is by no means a substitute for noise cancellation. Not a bit.

You can see the idea of what Google is doing and where it’s trying to go, but turning up the volume based on what the earphones hear and what ultra environment sounds like is by no means a replacement for genuine noise cancellation whatsoever. Fortunately you can turn it off, but it’s not much of an inclusion all the same.

Likewise there’s a lack of an ambient sound or transparency mode. The Buds do include a vent in the design to let sound in, but a full mic-enabled ambient or transparency mode is missing in action, despite being included on just about every earphone like the Pixel Buds.

And like the lack of the iOS app, it’s just one side of the Pixel Buds where it feels Google hasn’t quite finished what is an otherwise decent AirPods competitor. 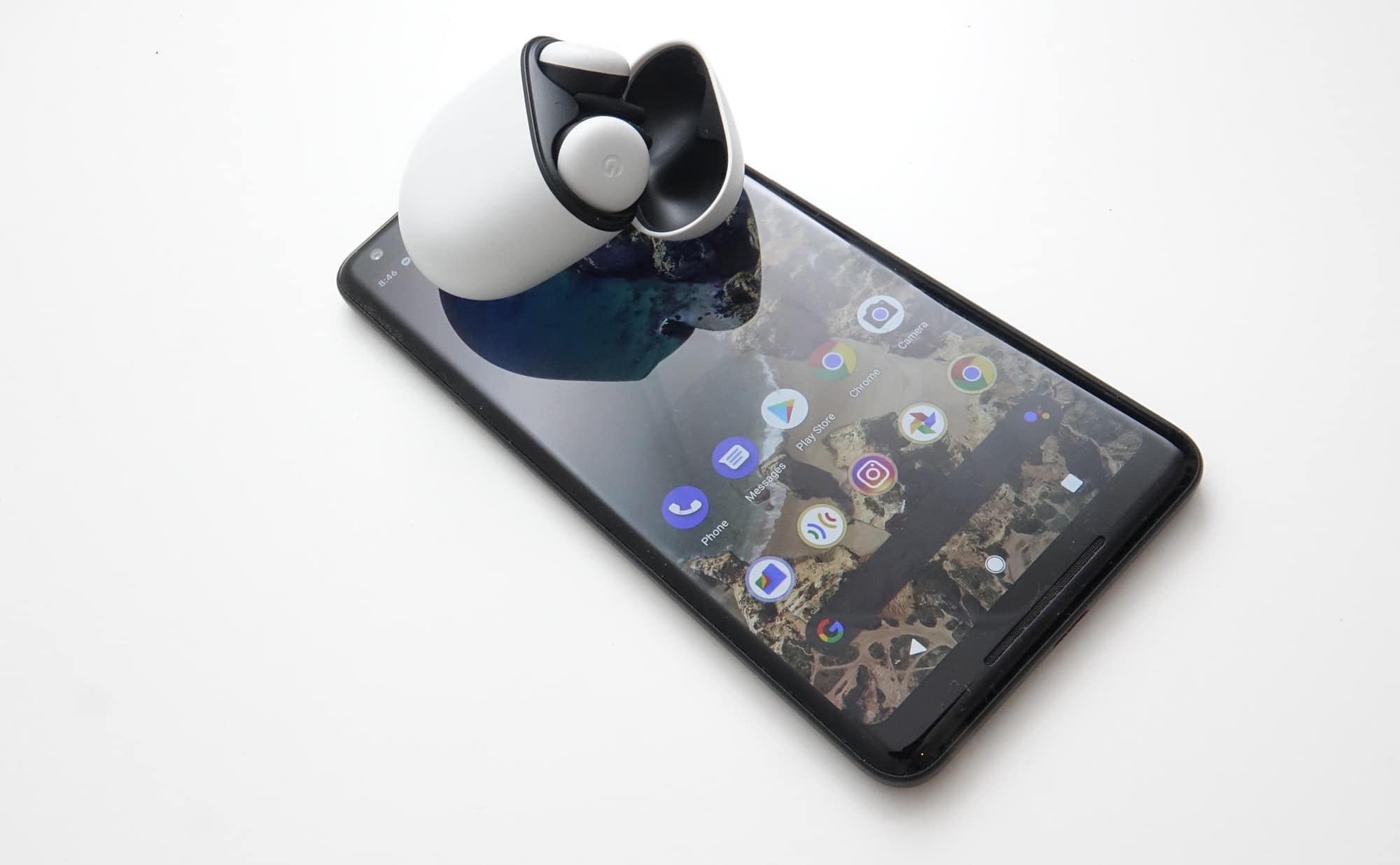 Google is known for a lot of things: an operating system running on around half of Australia’s phones, a browser that’s preferred to whatever Windows ships with, and just about the most used search engine in the world. These are just a sampling of some of the things Google is known for.

Sadly, great earphones aren’t one of those things, and the Pixel Buds 2 (or Pixel Buds 2020) won’t fix that reputation any time soon, either.

While the 2020 Pixel Buds are a decent attempt at a pair of truly wireless In-earphones, there are just so many better versions out there. Both the Jabra Elite 65t and Elite 75t feel like stronger efforts, as do Sony’s noise-cancelling WF-1000XM3 in-earphones. And that’s before you mention Apple’s AirPods Pro, which are also very strong.

Google’s Pixel Buds are very different from the AirPods Pro, for sure, but they feel like they should be competing more with them, and yet don’t. The audio isn’t as balanced, the noise cancellation isn’t there and instead you get an auto volume controller which needs work. Genuinely, the only major pros are the size and the wireless charging case. They’re better than the first, and yet still need work.

To put it simply, Google could have done better, and so can you. The Pixel Buds could be a decent pair of earphones if Google can fix the bass, and that might happen with software, but at release, they’re not quite the AirPods competitors Android needs. 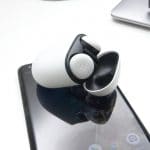 Google Pixel Buds (Pixel Buds 2)
Design
Features
Performance
Ease of use
Battery
Value
The good
Very small
Decent sound for specific music styles (typically either with lots of bass or none)
Wireless charging case included
The not-so-good
Bass falls a little flat
Adaptive volume is no substitute for noise cancellation
No ambient audio mode
No app for iOS
Touchpad can be a little temperamental
3.8