One of the best pairs of wireless in-earphones last year has been upgraded and made new again. Are the Jabra Elite 75t earphones a continuation of their siblings, and one of the best you can find?

We’re living in a post-wire world, and if you’ve ever needed an indication of that, you only have to look at the assortment of wire-free earphone out in the world. Also known as “truly wireless” earphones, it can seem like every company and its dog makes a pair, and that’s because there are just so many.

Think of an audio brand and you’ll typically find a pair lurking on its webpage, and even some other companies you might not be thinking of. Phone makers have ’em, and a whole bunch of names have been built up to create them, too.

Last year, one of the better options you could find came from one of the GN Resound brands, Jabra, which has long been known for its Bluetooth earphones and teleconferencing hardware. GN ReSound makes hearing aids, so it’s not exactly new to wireless sound, and last year’s Elite 65t earphones demonstrated its strength in the area.

While Jabra has made wireless earphones in the past, and even has tried truly wireless earphones, the Elite 65t were small, light, and surprisingly strong, lacking only in the bass, which needed an incredibly strong seal to even hear a small amount of that bottom end.

This year, Jabra is back with a new variation, the Elite 75t, and we’re hoping the bass has improved. Even if it doesn’t, the design has seen a change, with Jabra somehow making the Elite 75t smaller, and the case more compact. It’s crazy just how small these things can get, but are they as good as they ever were? 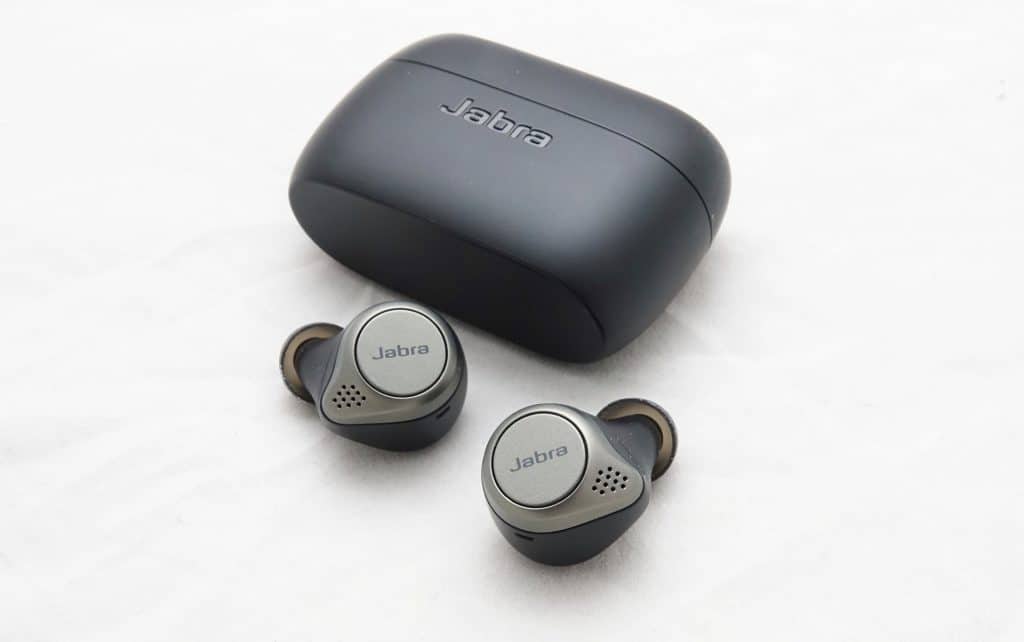 Smaller and lighter, the Jabra 75t takes what worked in last year’s 65t, and changes a few things.

For one, the design is a little different. While the 65t earphones sported little beamforming arms for the sound and microphones, the arms are now more of a nub in the design, sitting in the ear just a little more neatly. That helps the Jabra Elite earphones to shave off some of the physical dimensions, reducing a fraction of weight in the process, though they’re still very light, fitting neatly in the crevice of the ears.

The technology inside is still very similar, with four microphones for calls, though you can switch on an ambient mode to listen through them if need be, as well as IP55 water and dust resistance. That last one means you should be able to go running with them, because sweat counts as “water”, just don’t go swimming with the Elite 75t in-ear. 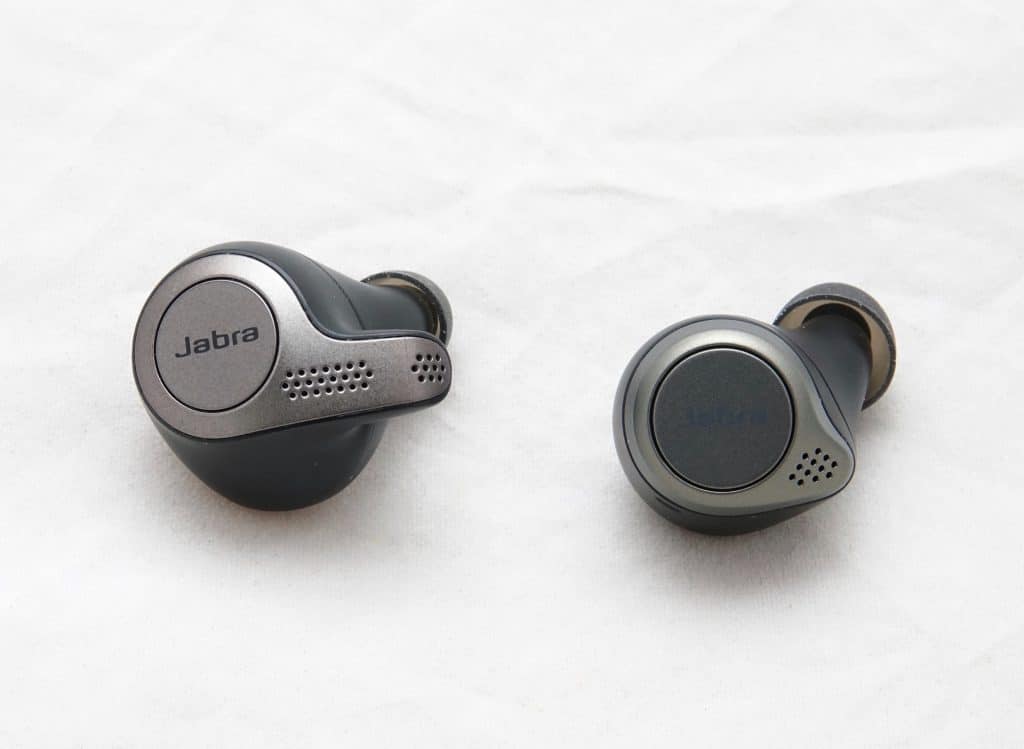 The speakers inside are 6mm, and the whole setup relies on Bluetooth 5 to talk to a phone or tablet, or even a computer. There’s a Jabra app for iOS and Android, but you don’t need to use it if you don’t want, and can use the Jabra Elite 75t earphones with anything that supports Bluetooth, including a wearable you might have.

You store the Jabra Elite 75t in the case, which acts as a charger for the whole thing, and it too is smaller than it was last year, also jumping from microUSB on the Elite 65t to the USB Type C port on the Elite 75t.

There are two buttons to control the Jabra Elite 75t in-earphones, with one button for each earphone, left and right. They’re not of the touch variety like some other earphones, and instead you’ll rely on a combination of buttons to do various things. In fact, whether you’re on Android or iOS, you’ll find support for both.

Controlling is more or less just down to you memorising what each button does, with the right earphone button used for pause and play, and picking up phone calls, though you can also reject phone calls by double pressing. When not in a phone call, double pressing that right button kicks in your phone’s voice assistant.

The left side is used for turning the ambient mode “Hear Through” on with one press (or turning it off), skipping a track with two presses, or going back to a previous track with three.

Volume controls work across both, because yes, you can control volume settings using just the single buttons on the Elite 75t earphones. Hold down the left button to see the volume go down, while holding the right one down will push the volume up.

This level of versatility on the Jabra Elite 75t buttons means you don’t necessarily need to take your phone out of your pocket or rely on a wearable to control things, and can actually get most of the functions sorted simply with two buttons. It’s an effective system, and once memorised, really handy. 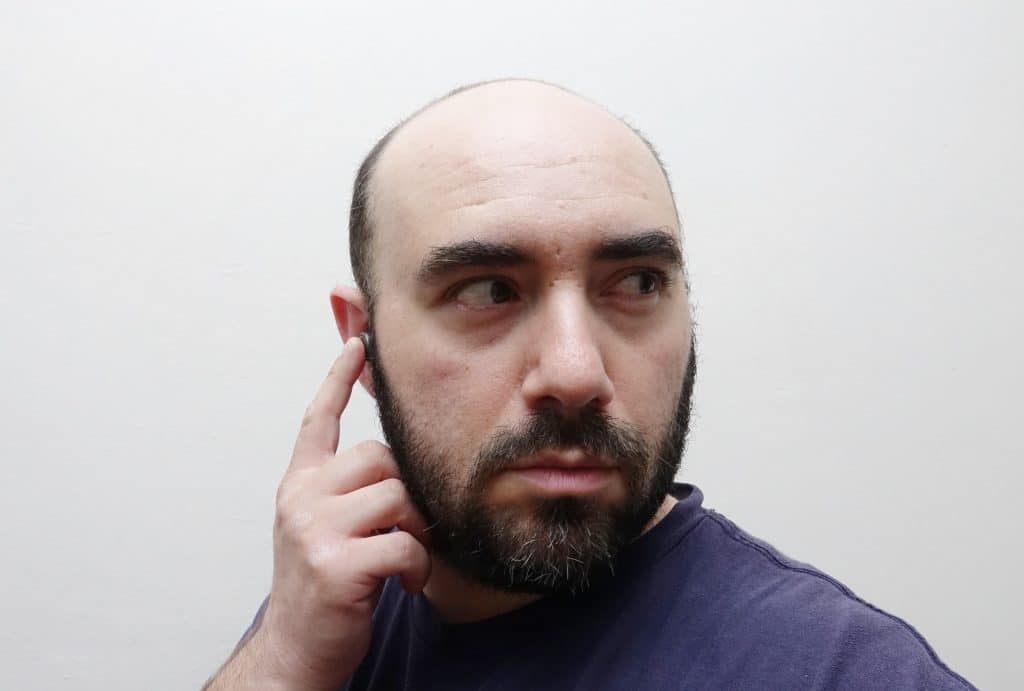 With a tweaked designed that loses some of the weight, we’re very interested to see how these earphones perform. The Jabra Elite 65t provided one of the best experiences you could find for its price point, and while it was lacking in bass, the result was very impressive for the price.

So have things transcended, or has Jabra gone backwards?

As usual, we’re running this earphone test through the Pickr Sound Test, which you can try for yourself on Spotify, Apple Music, or Google Play Music.

Our Jabra Elite 75t review starts with electronic, and it’s the first taste you get of an improvement in the bass. The mids are there, the highs are there, but then when Tycho drops a massive bass hit in “Glider”, you really can feel a noticeable difference in between the models. It’s an impact that was missing in its predecessor, the Elite 65t, with a little more in the bottom end of that range more clear in this model.

It’s a similar feeling in Daft Punk’s “Contact”, which renders the mids and highs with about as much punch as each other, and lets the bottom drive through to hammer the bass in, rather than let it fall with an underscored thud. For some, this may be a little too much bass, though others will appreciate the impact, as if the earphones were relaying the impact you need, not just the impact you want.

You can feel it more in some songs than others. As we jump into pop, Carly Rae Jepsen’s “Cut To The Feeling” keeps time with a fist punch without losing the impetus of the other sections. This is more of the balance we yearned for in the Elite 65t, though depending on the track, you may feel it gets overpowering. In Ariana Grande’s “Into You”, the bass could be a little more vibrant than we expected, as was the case in FKA Twigs’ “Two Weeks”. 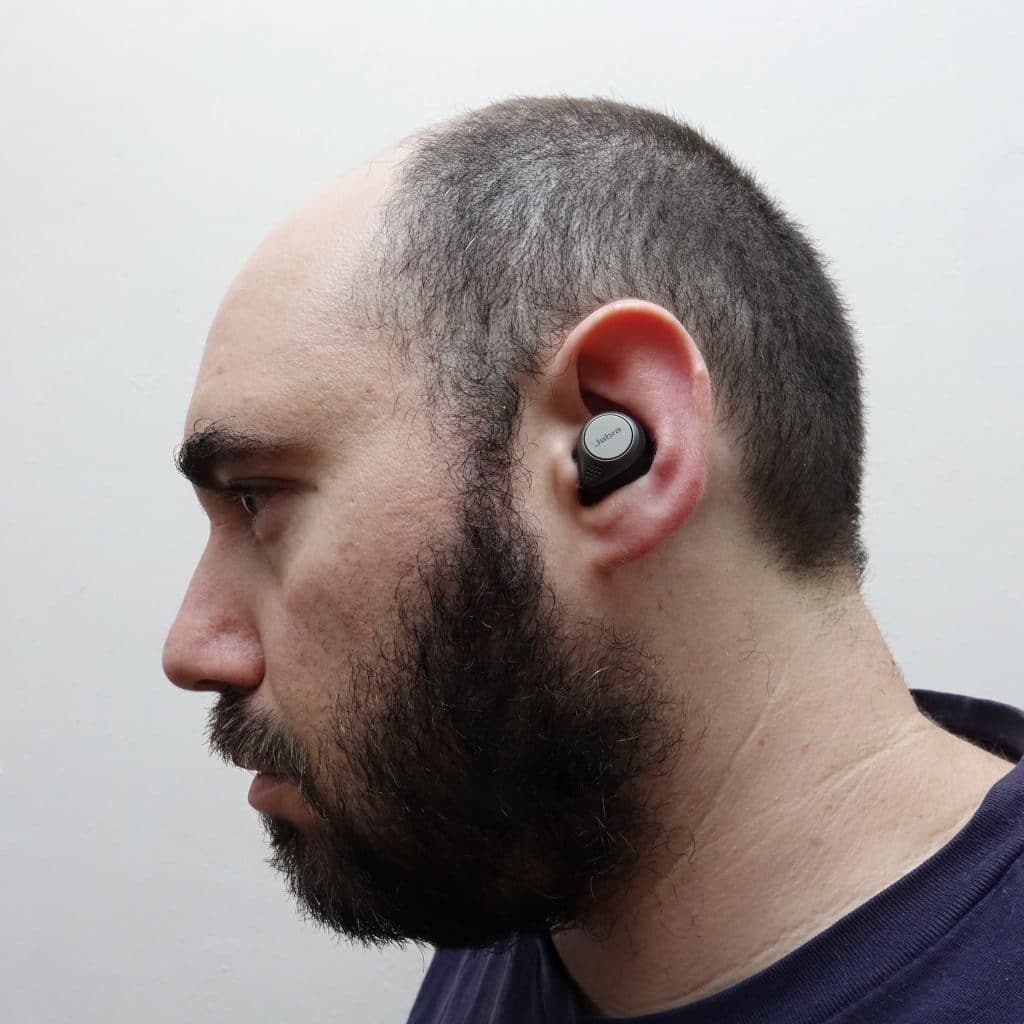 Switch over to rock, and you’ll feel a little more balance, with some solid focus on the bottom end. There’s a good solid punch as we jump from the hard rock of the Deftones to the more classic strumming of The Who, with a good tonality.

Even into jazz and classical, the experience is a little warmer than we expected, with the Jabra Elite 75t earphones handling their own in a similar capacity to some of the earphones that come out of Sony. This isn’t the flat sound that emulates Bose, the style that we experience in the noise cancelling Elite 85h headphones. Rather, this is more like the warmth we’ve felt from select earphones, and it’s definitely welcomed.

Aside for improved performance, Jabra has also made a dent on the battery life, with as much as seven hours per charge, an increase on the four we found in the previous incarnation.

The case itself gets a jump, too, with around 28 hours possible from the diminutive Elite 75t case, which is smaller than before and fits into pockets even more kindly.

Credit to Jabra where it’s due, because the battery on the Elite 75t really kicks a goal. 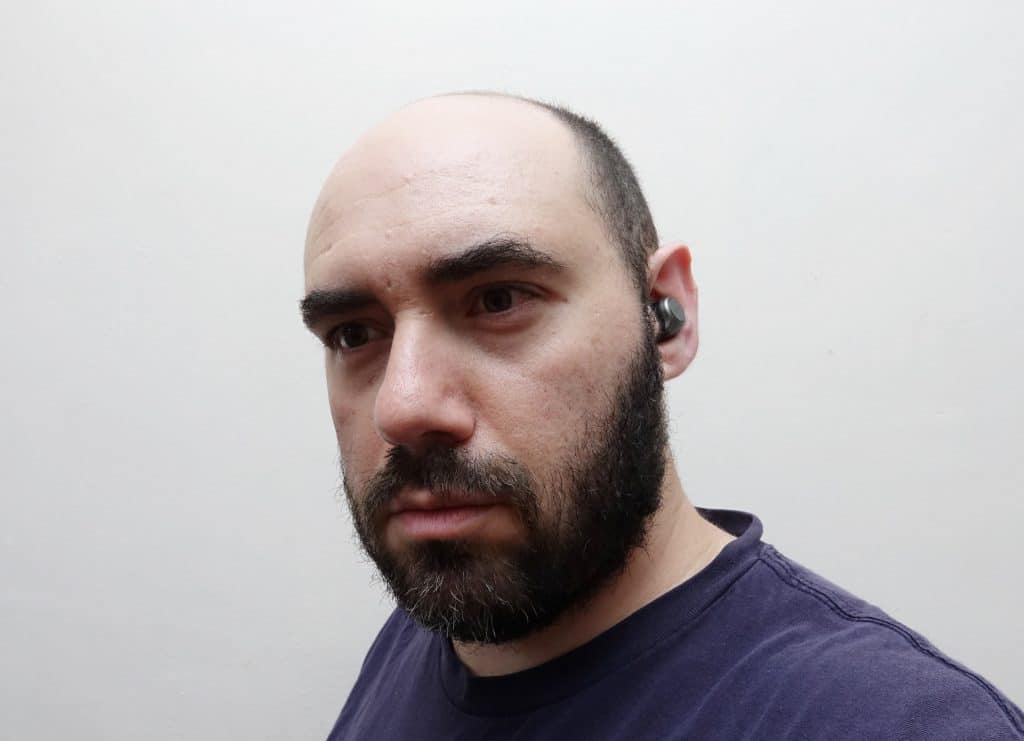 The value isn’t bad either, achieving more or less the same value from last year, though the range has certainly solidified in comparison to what it looked like in 2018.

In 2019, there are easily more wireless and cordless earphone varieties than we think anyone expected, and that makes your options more interesting.

At $299, what you’re getting is still a solid content for earphones of the year, with a slight price bump over the Apple AirPods revealing better sound and just as small a size.

But they do miss a few things, and they’re the sort of features we’re surprised Jabra went without.

One of these is active noise cancellation, which would have been a welcome inclusion. Jabra’s use of in-earphone tips provides some semblance of isolation, but we’re not talking actual cancellation, so you’ll still hear rumblings of the outside world as you jam along.

In fairness to Jabra, we don’t expect active cancellation in a pair of earphones at this price point, but it would have been a pretty stunning inclusion, especially since no other pair of truly wireless Jabra earphones includes the technology, and it could have set a benchmark on price and capability.

But not on the Jabra Elite 75t. No such luck, I’m afraid.

The only other quibble is with the bass, because while the Elite 75t are a drastic improvement on the modicum of bass you could find in the Elite 65t earphones, it can sometimes be overpowering. On the upside, Jabra’s app does let you apply equaliser tweaks to control it, so if it does get to being too much, at least you can do something about it. 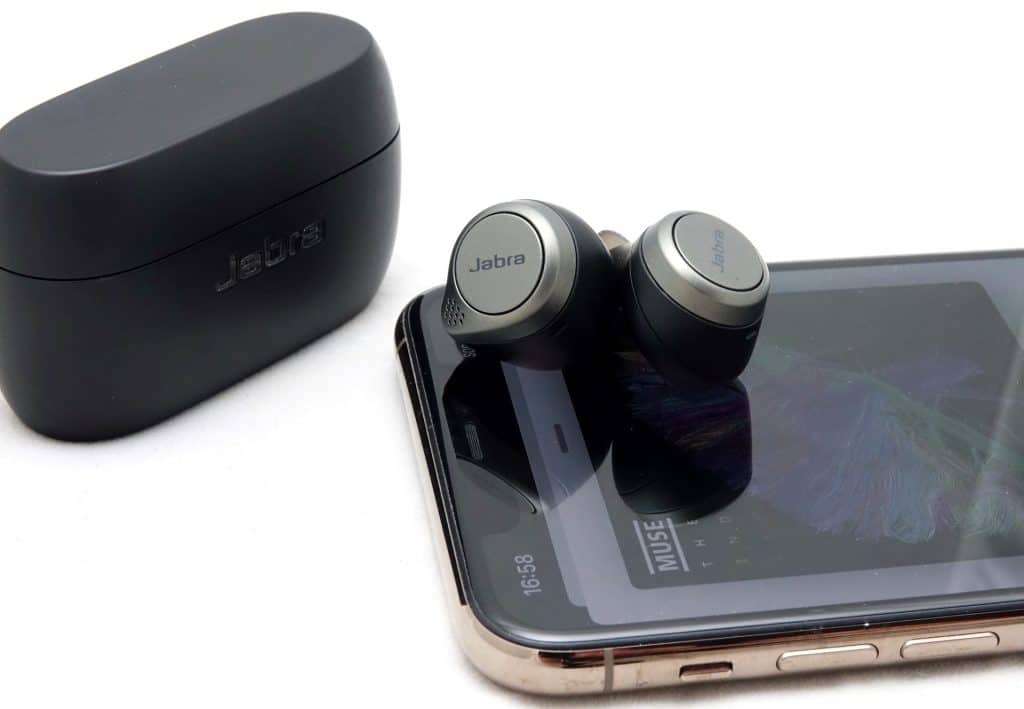 While the Jabra Elite 65t were one of the better pairs of wireless in-ears you could find for the past year, the Elite 75t pushes that envelope just that little bit more.

In an everyday world where size is at a premium, the Elite 75t show that it’s not just Apple that understands the importance of a small pair of powerful and wireless in-ears, but someone else. These are mighty and small, and handle portability beautifully.

If anything, they’re the exact combination of what Jabra needed to get right, pushing more strength in the lows, mids, and highs, and making the design even better. Even though noise cancelling is missing from the equation, they’re a solid update for what was already an excellent range.

If you can live without the cancellation and are after strong sound and size, the Jabra Elite 75t are earphones to check out. Highly recommended. 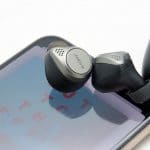