With a slick design and smallish screen, the Asus ZenFone 8 is the company’s first non-gaming phone in Australia in ages. Is it worth your money?

There are more than a few mobiles to choose from in Australia, so if you’re considering buying something, you definitely have choice, but picking isn’t always easy. And if you’re trying to pick something no one else has, that can be difficult, too.

If everyone you know has an Apple, a Samsung, an Oppo, or a Google, and you want flagship, you don’t have a tremendous amount of options left. And yet there may still be one more.

More commonly known for its computers, Asus is bringing a flagship phone to Australia in the ZenFone 8. At 5.9 inches, it’s a little smaller than most of the phones we’re used to seeing, because big is in, and it comes with an assortment of features that screams premium, too, such as a fast chip and 5G. Is it a high-end phone worth considering? 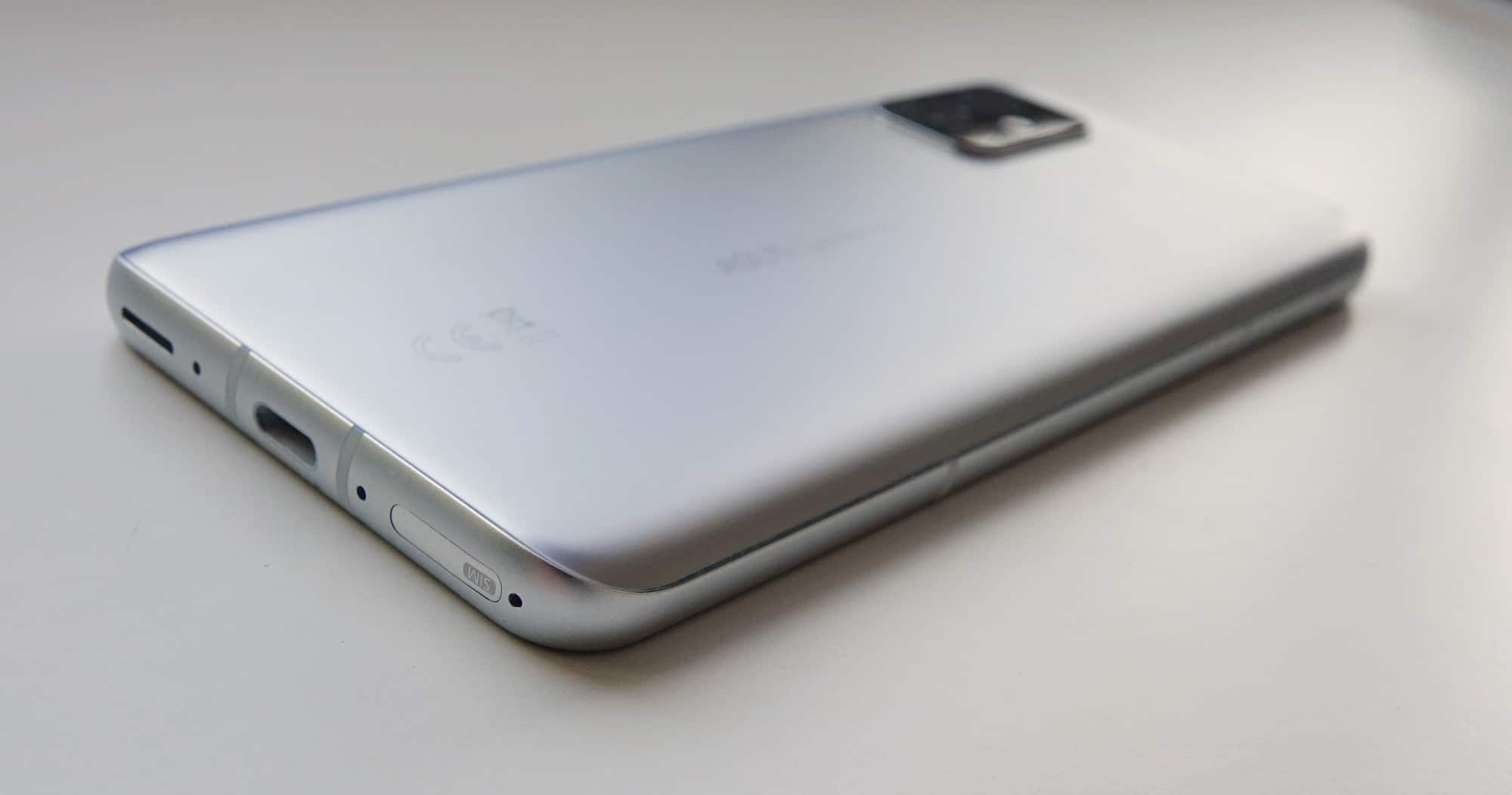 With a design a little reminiscent of the old Samsung Galaxy S7 and Note 5, the Asus ZenFone 8 appears shiny and polished in a way we’ve not seen from Asus phones lately. It’s been some time since we saw this design, but it’s definitely one that feels familiar, even if it’s a new for Asus.

The most recent Asus phones to reach Australia have been from the Asus Republic of Gamer “ROG” phones, such as the ROG Phone 2 and the ROG Phone 3, which arrive with a huge screen, PC-inspired details, and colourful lighting around accents, but not this one.

Different again — and clearly focused on a different type of phone owner than a gaming phone — the Asus ZenFone 8 offers a metal frame and glass-covered front and back that fits nicely in the hand, thanks in part to smaller than normal 5.9 inch screen. Smack dab in the middle of the iPhone 12 Mini’s 5.4 inch screen and the iPhone 12’s 6.1 inch, Asus is basically offering a marginally smaller take on the 6 inch Google Pixel 5.

Screens smaller than 6 inches in a phone are becoming rarer, but the ZenFone 8 delivers a small take on a smartphone, making it hand and pocket friendly.

Inside that hand and pocket friendly take, you’ll find specs that place it in the high end, even more so than the aforementioned Pixel 5.

Even though Google opted for something from the Snapdragon 7-series for its 6 inch Pixel 5, Asus is going for the best chip you can find this year, with the Snapdragon 888 5G platform.

That gives you an eight-core chip which in our review model was paired with either 8 or 16GB RAM, as well as 256GB storage, though there’s no microSD slot to upgrade it with. 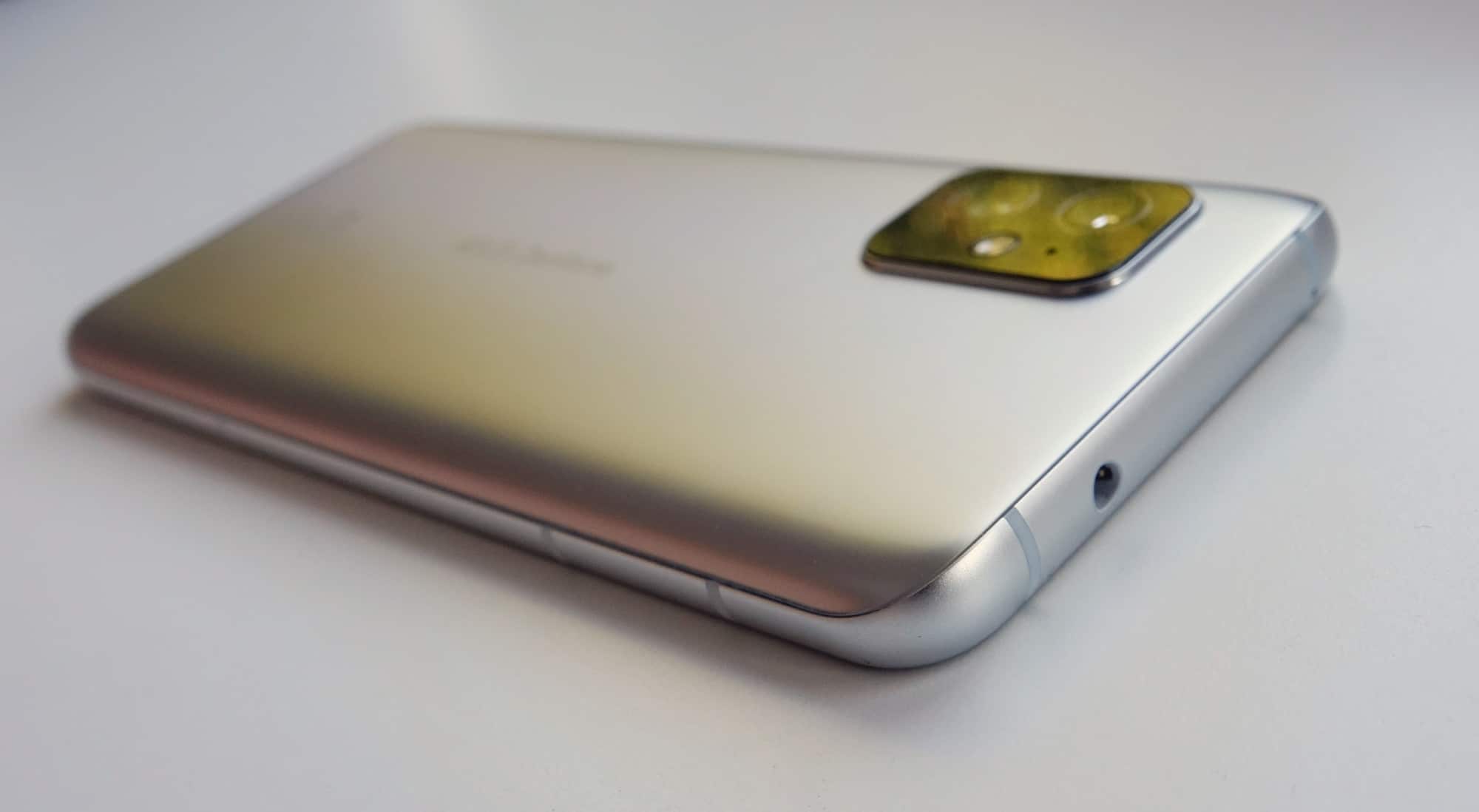 Cameras are also clearly important in a phone, but on the ZenFone 8, you mightn’t realise that, with only a couple on the back and one of the front. At the back, there’s a 64 megapixel F1.8 standard wide camera that brings the images back to 16 megapixel by using four pixels for every one, while the ultra-wide camera alongside it is a 12 megapixel camera set to F2.2. The main camera can handle up to 8K video, as well, while the wide camera handles up to 4K.

On the front, Asus is using a 12 megapixel selfie camera sitting in the top-left corner, with a hole punch design that some manufacturers call the “dotch”. 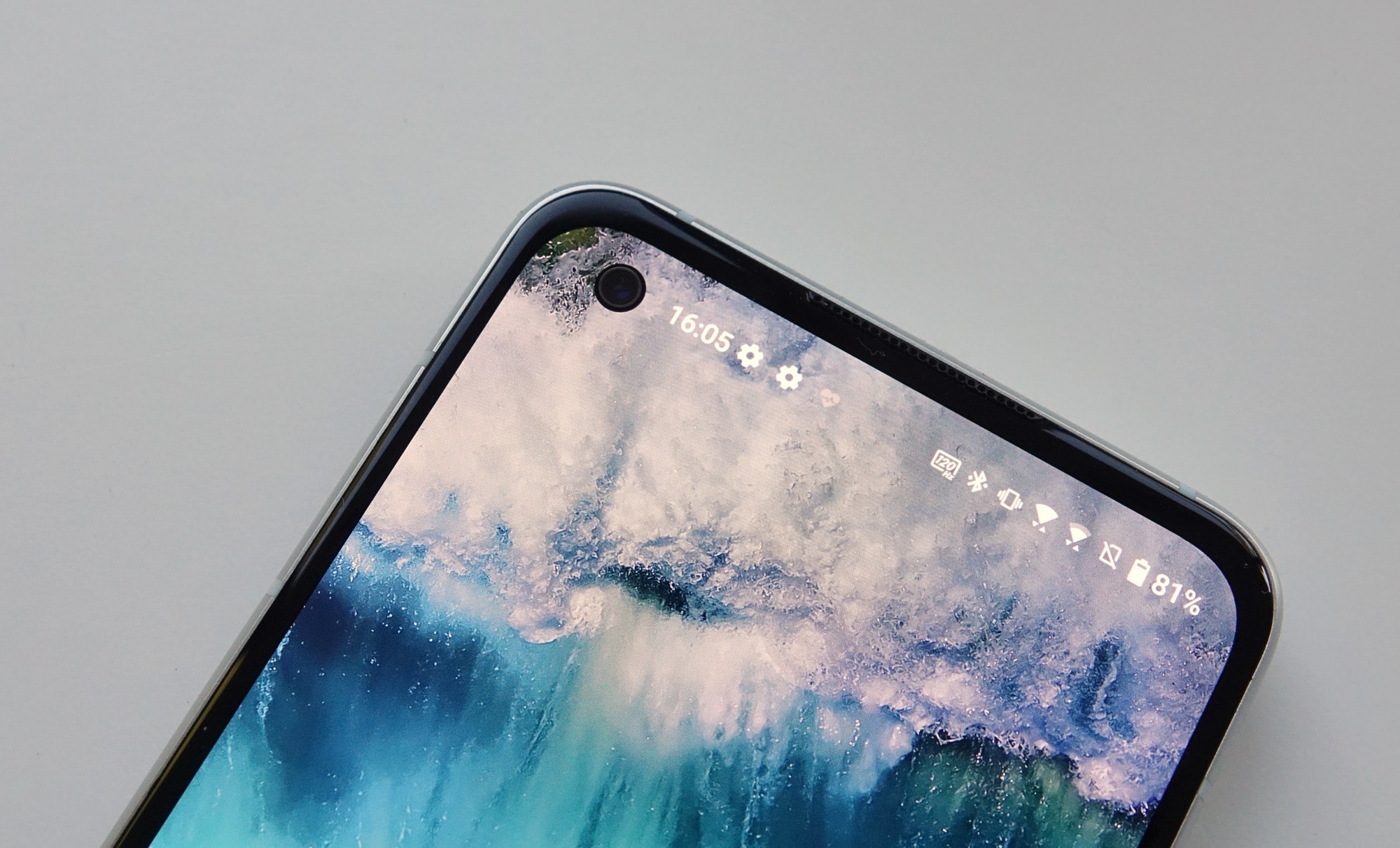 Physical connections are actually a little surprising, with both Type C USB for charging and data transfer, as well as a 3.5mm port — something we typically don’t see on flagship phones anymore — while wireless is quite varied, too, supporting 4G and 5G, 802.11a/b/g/n/ac/ax WiFi 6 as well as the new WiFi 6E standard when it works locally, Bluetooth 5.2, and Near-Field Communication (NFC) for things like Google Pay.

A fingerprint sensor is found in the screen and can work alongside a facial recognition sensor, and some of the extras on the Asus ZenFone 8 include support for up to 32-bit/384kHz hi-res audio throug the 3.5mm output, three microphones to refuse noise as you talk, and an IP68 water resistance rating.

There’s also a 4000mAh battery under the hood, and about the only thing missing is wireless charging.

Editor’s note: our Asus ZenFone 8 review model came with 16GB RAM, but the Australian models earmarked for release all look set to arrive with 8GB RAM. 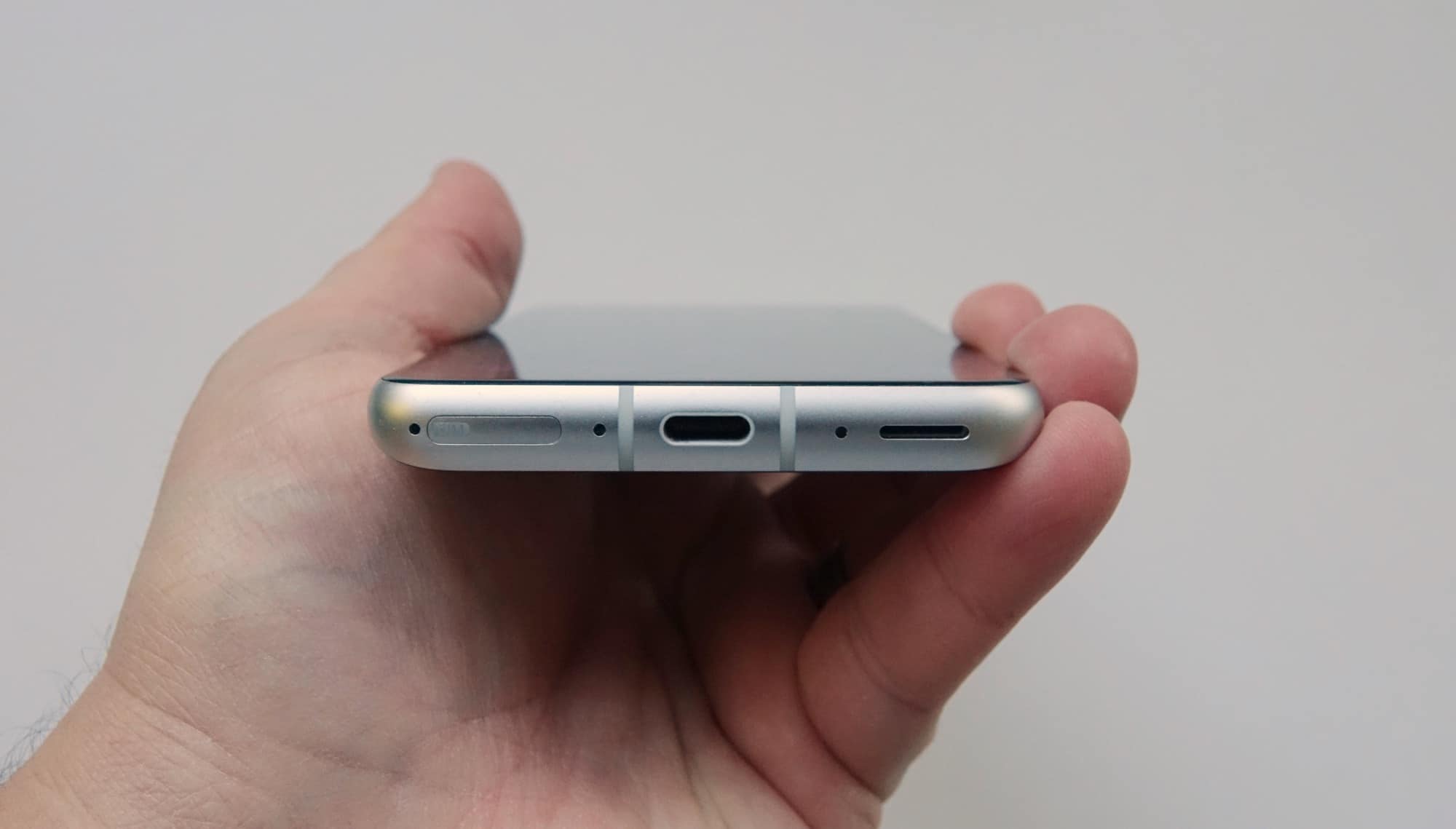 This isn’t our first Android phone, and it may not be yours, so it’s probably a good thing the Asus ZenFone 8 doesn’t really do anything different, at least with regards to how you use it.

You won’t find a totally pure version of Android 11 here, as far as we can tell, but it’s not far off the mark, offering widgetised homescreens, an app drawer, and the Google Now screen found on the very left, making it similar to stock Android, though not entirely the same.

It’s Asus’ flavour on stock Android, but not the full thing, and that’s ok, because it’s fairly easy to get used to.

Using the ZenFone 8 is also helped by its size, which at 5.9 inches means it can be a one-handed phone with no worries whatsoever. There’s a lovely screen here running at 120Hz, making it slick, and while it’s only a Full HD+ display at 2400×1080, it’s still nicely sharp, too. 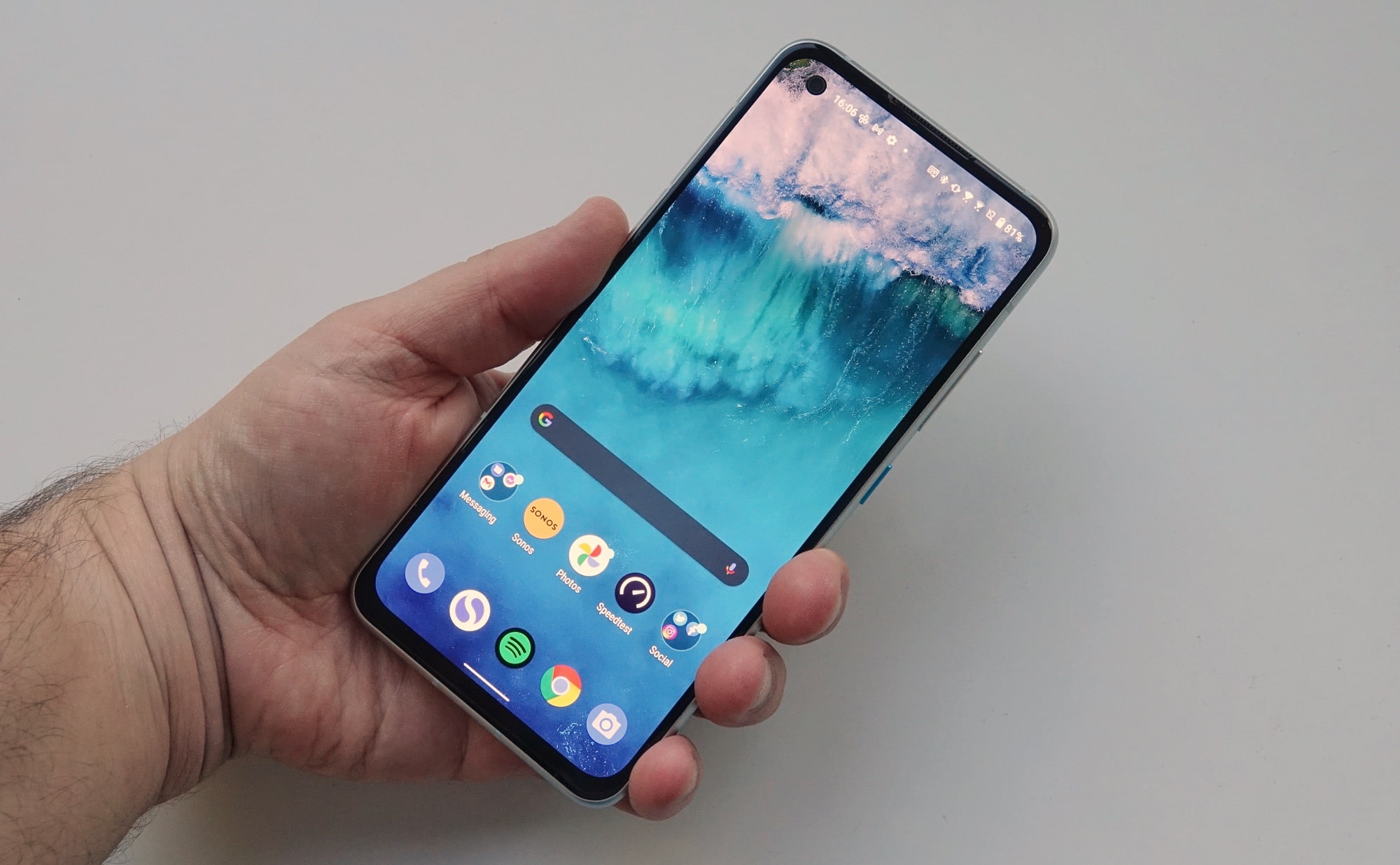 Switch the ZenFone 8 on and you’ll see a system clearly built to go, even if it doesn’t exactly break new ground.

Yes, it’s another Android phone, though it’s one offering plenty of power, with the Snapdragon 888 Qualcomm announced at the tail end of last year, but that means you get a fair amount of speed to work with, because this is high end.

We’ve not seen Qualcomm’s Snapdragon 888 on many Australian releases this year, but with that chip and a solid 16GB RAM, you’ll find next to no lag in whatever you do, making the ZenFone 8 highly capable. It’s about all the performance you’d want in a phone, and it extends to 5G, too. 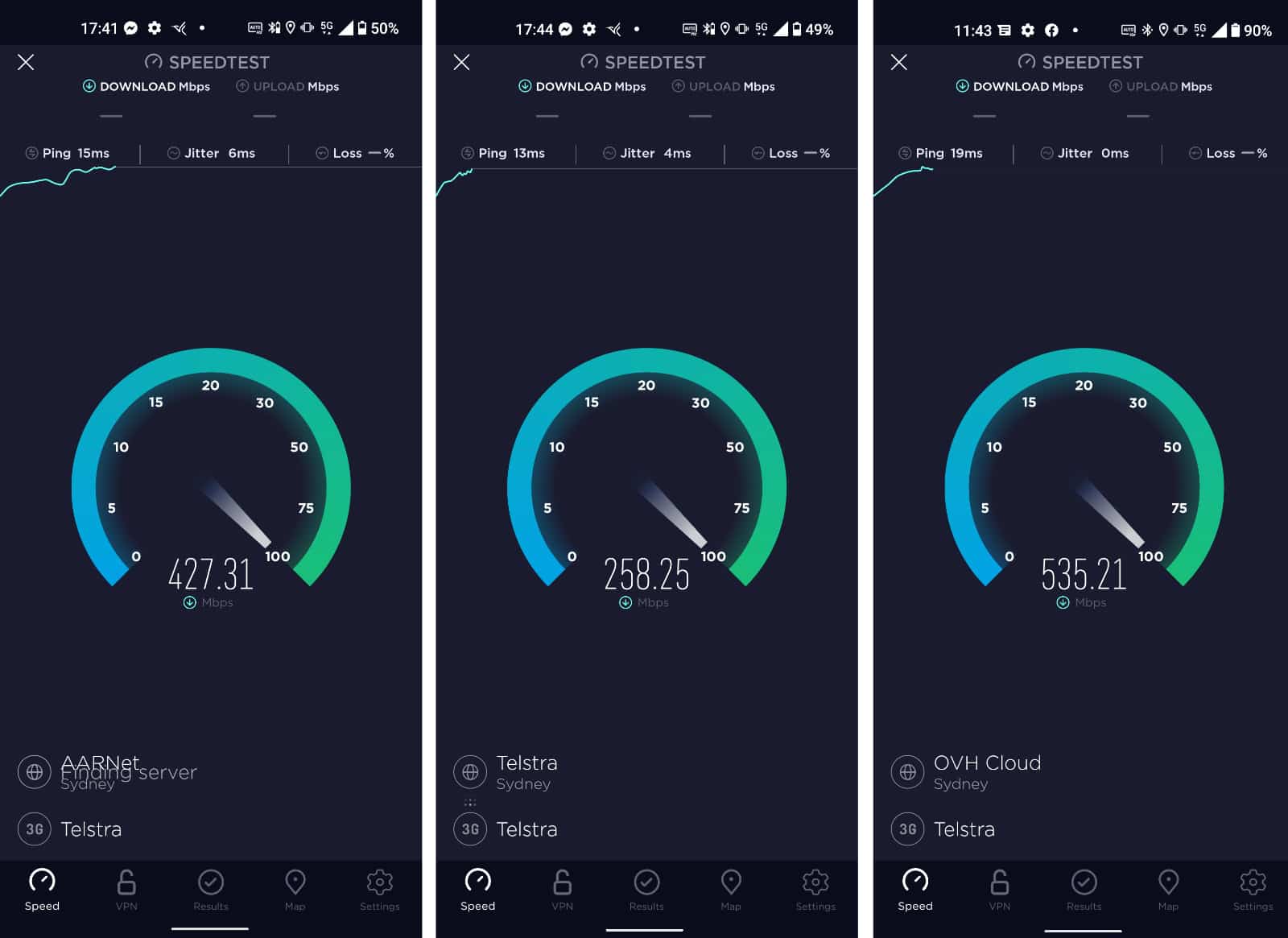 Throughout our ZenFone 8 review, we found speeds as high as 540Mbps on Telstra’s 5G network in Sydney. That’s a strong result, though your results will vary based on where you are, the network you use, and other factors that can and will change the speed.

Sufficed to say, there’s plenty to work with here if you need it.

Just make sure to have the 5G setting enabled. From the get-go, Asus actually doesn’t have it enabled in the settings, and so if you’re scratching your head trying to work out why a ZenFone 8 isn’t latching onto a 5G network and coming up as only 4G or below, dive into settings and check this option for yourself.

Next up is the camera, and this is one area that may feel a little short, with only two camera offered in the phone: standard and wide.

Granted, that’s not a dramatic difference from what Apple uses across the iPhone 12 and iPhone 12 Mini, and is more or less in line with what Google uses on the Pixel 5, but then the Asus ZenFone 8 isn’t one of these phones, at all. Beyond Google’s own, we’re used to seeing more cameras on flagship phones.

Two is fine — we’re not going to demand — and the results from the ZenFone 8 are good, with decent colours and clarity across daylight shots and portraits, as well as nice images at night, though they can be a little soft at times.

While the camera can fire without the flash in low light, you may find the stacking mode doesn’t show up as nicely in the on-screen viewfinder than it does in the shot. Don’t fret, the results are typically decent, but we don’t think they’re quite as sharp or balanced as what we could get on other phone cameras.

Alongside a camera that could be a little better is a battery life that matches those sentiments. Despite there being a 4000mAh battery, we found a maximum of a day during our ZenFone 8 review period, with a nightly charge likely being needed.

Not helping the ZenFone 8 is a lack of wireless charging, which seems surreal given every flagship includes this feature these days. And yet, wireless charging is missing in action on this phone.

That’s not an amazing battery life or result, and places the ZenFone 8 at a level of “ordinary”, though at least leaves it at a similar footing to phones near its size.

Yet at a price of $1099 in Australia, the ZenFone 8 is acceptable value, though comes with a price that backs up with the Pixel 5G, which is clearly its main competition.

Offering a similar size and camera assortment, the ZenFone 8 is technically the leader on paper for specs, but Google’s Pixel 5 delivers a more polished feature set, with a better camera and wireless charging for $100 less.

It’s not necessarily easy to spot the ZenFone 8’s value in light of this, with the main different perhaps if you want more storage in a glass phone, versus less storage and wireless charging. That appears to be the main difference, though we’d argue Google’s Pixel 5 delivers a better camera and an undisturbed version of Android, the latter of which Asus gets close on, but still opts for its own slight differences.

However, we wish Asus did more in this phone.

It’s great to see a smaller Android phone pop up, especially when so many handsets are so large. Screen sizes below the 6 inch mark are rare at the moment, though it is surprising that for Asus, its 5.9 inch phone actually manages to be physically bigger than the 6 inch Pixel 5.

We could therefore excuse the mediocre one day of battery life given that’s not far off what Google gets, but have more of an issue with the lack of wireless charging. The ZenFone 8 is a high-end phone without a feature nearly every other high-end phone has, including the Pixel 5.

We’d also fix up the fingerprint sensor, which definitely needs work. Our ratio for logging in just didn’t deliver, and relied on the facial security more often. Thankfully you have both, but it’s not exactly a win here.

The biggest problem with the ZenFone 8 might be that it just doesn’t deliver enough of an individual point to recommend it over a competitor. There’s no third camera shoved into the design — Asus saved that for the bigger ZenFone 8 flip — and there’s no wireless charging, which pretty much every flagship phone supports.

Simply put, there’s no crash hot amazing feature that makes the phone stand out, not considerably beyond the fact that it’s an Asus, rather than something made by the standard flagship players of Apple, Samsung, Google, and Oppo.

We’re not sure that’s enough to say “this phone is remarkable”, because there’s not much to the ZenFone 8 to really get you there. It’s a phone. It’s a good phone. It’s just not a thoroughly unique or extraordinary phone. 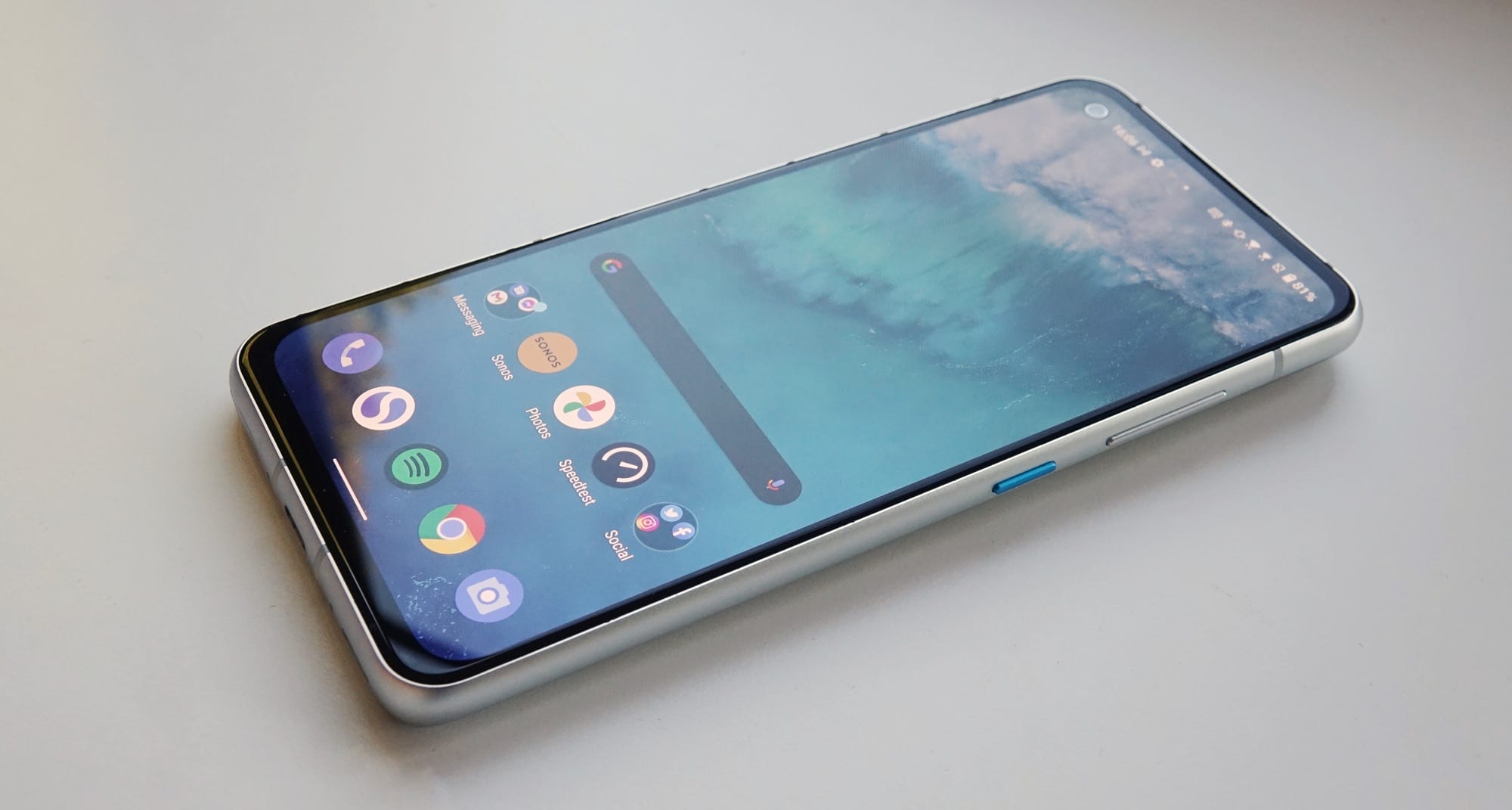 That’s not a bad thing, mind you. Phones don’t always have to be extraordinary to grab our attention.

The Asus ZenFone 8 is a nice phone that looks and feels premium, and delivers what you might need for a decent price, too. The price may well be one of those defining features, because it’s a little lower than what flagships normally command these days.

If that’s all you’re looking for, the ZenFone 8 is worth a look, as it provides a smaller style of phone that’s easy to carry. It’s a nice phone, for sure, but keep in mind, there are a lot of other nice phones out there, as well. 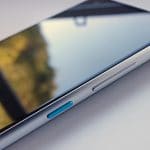