Sonos takes its sound to go with pint-sized Roam

The experiment with the portable Sonos Move was just the beginning of a wireless Sonos. Now the company is making its tech smaller and more affordable in Roam.

Wireless speakers are a dime a dozen, because everyone makes them. Hell, we wrote about three in one story just yesterday.

But they’re not all the same, evident not just because of their sizes, but also who makes them and what they’re designed to do. While wireless speakers come in all shapes and sizes, and typically focus on one virtual assistant above all, some attempt to do them all, and even integrate in your home sound system a little more clearly.

Almost two years ago, Sonos tried that with a new concept for the brand: a Sonos speaker that could work at home like the Sonos One, but could also be taken outside like a Bluetooth speaker.

It was the Sonos Move, a chunky but water resistant and portable take on the Sonos system that included a sizeable rechargeable battery and a lot of sound. The Move could be used at home and outside, but at just under $700, it wasn’t going to be a portable speaker for everyone. Even though it could act as both a speaker to extend the capability of sound from your phone and tablet — a wireless speaker — and also integrate into the rest of the Sonos system when at home, its size and price could be a little hard to get over, and so Sonos has been working on something else.

Two years later, the result is something smaller, and more economical, too. The Sonos Roam is a speaker designed similarly to other cylindrical wireless speakers, but built to be different, and can integrate with the rest of the modern Sonos system. In fact, at $279, it’s actually now the most affordable entry point into the Sonos system overall, and that makes it very different.

What is the Sonos Roam? 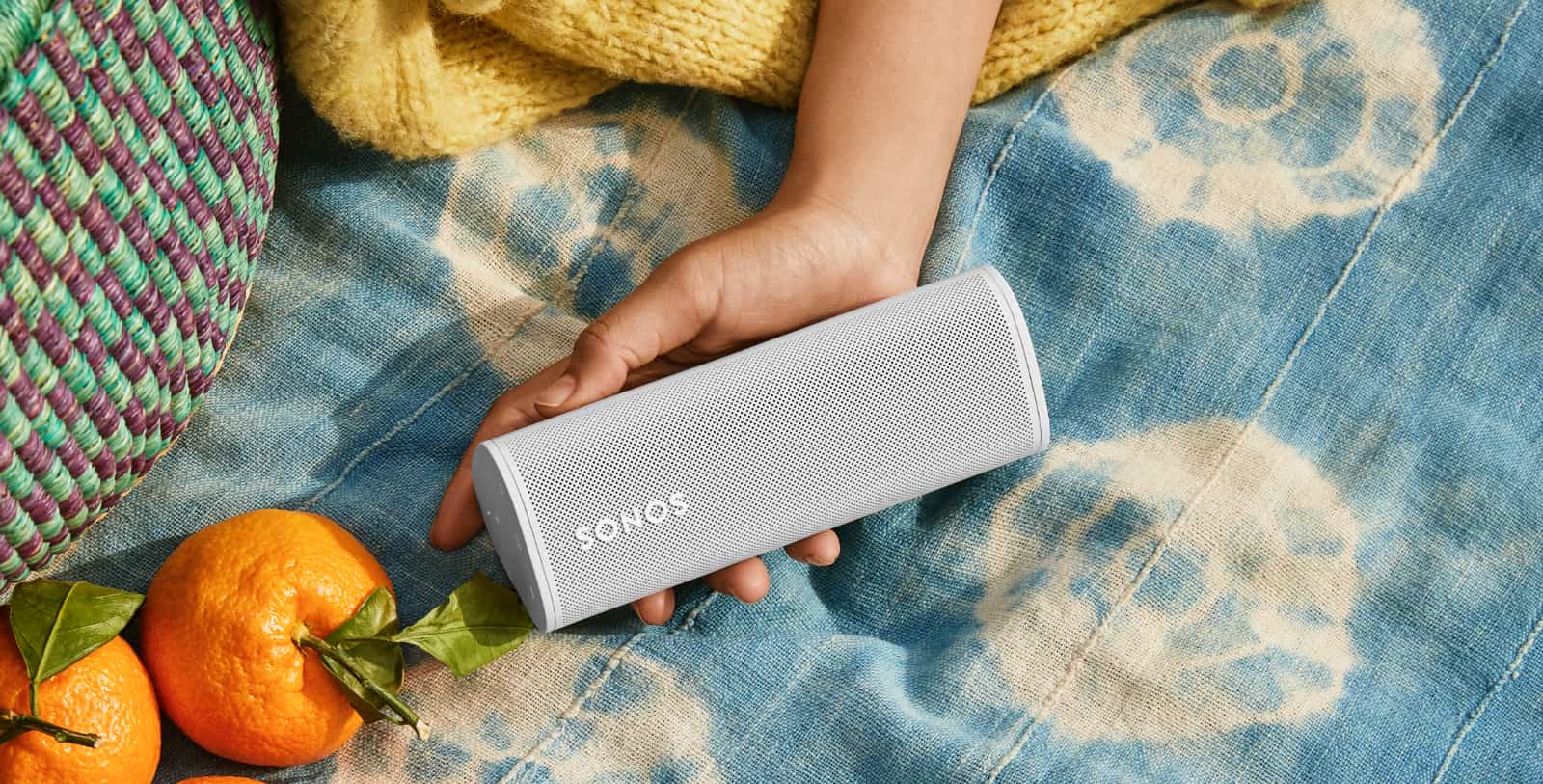 Upon first glance, you might confuse the design for other cylindrical speakers out there, like what Ultimate Ears offers, or even other brands. Practically everyone has a cylindrical Bluetooth speaker, and so it’s easy to see how the Sonos Roam might be similar. Yet you only need to look at the Sonos name on the side to know this isn’t just a portable speaker, but a device that will play with a bigger Sonos system if you have one.

Supporting both Bluetooth and WiFi, the Sonos Roam can talk to a standard Sonos multiroom network over WiFi, and then go to Bluetooth when you take it outside the network.

If you do take it outside, the speaker is IP67 water and dust resistant, and when you come back, the hardware can also connect your music up with the rest of a Sonos network, thanks to a technology called “Sound Swap”, which basically allows the music to jump from one speaker to the rest of the network when it’s rejoining. While Sound Swap sounds like the sort of precursor technology for a pair of wireless headphones the brand might be working on, right now, the logic is about making sure music you listen to outside the home can be joined up with the rest of a speaker system when you come back.

And much like the rest of a Sonos system, inside, Sonos has applied its typical engineering-forward approach, bringing together one mid-woofer and one-tweeter, connecting two Class H amplifiers and throwing it under a honeycomb-structure grill, keeping everything well built. While Class H amps are smaller than the typical Class D Sonos has used in the past, there’s actually a good reason why: power. 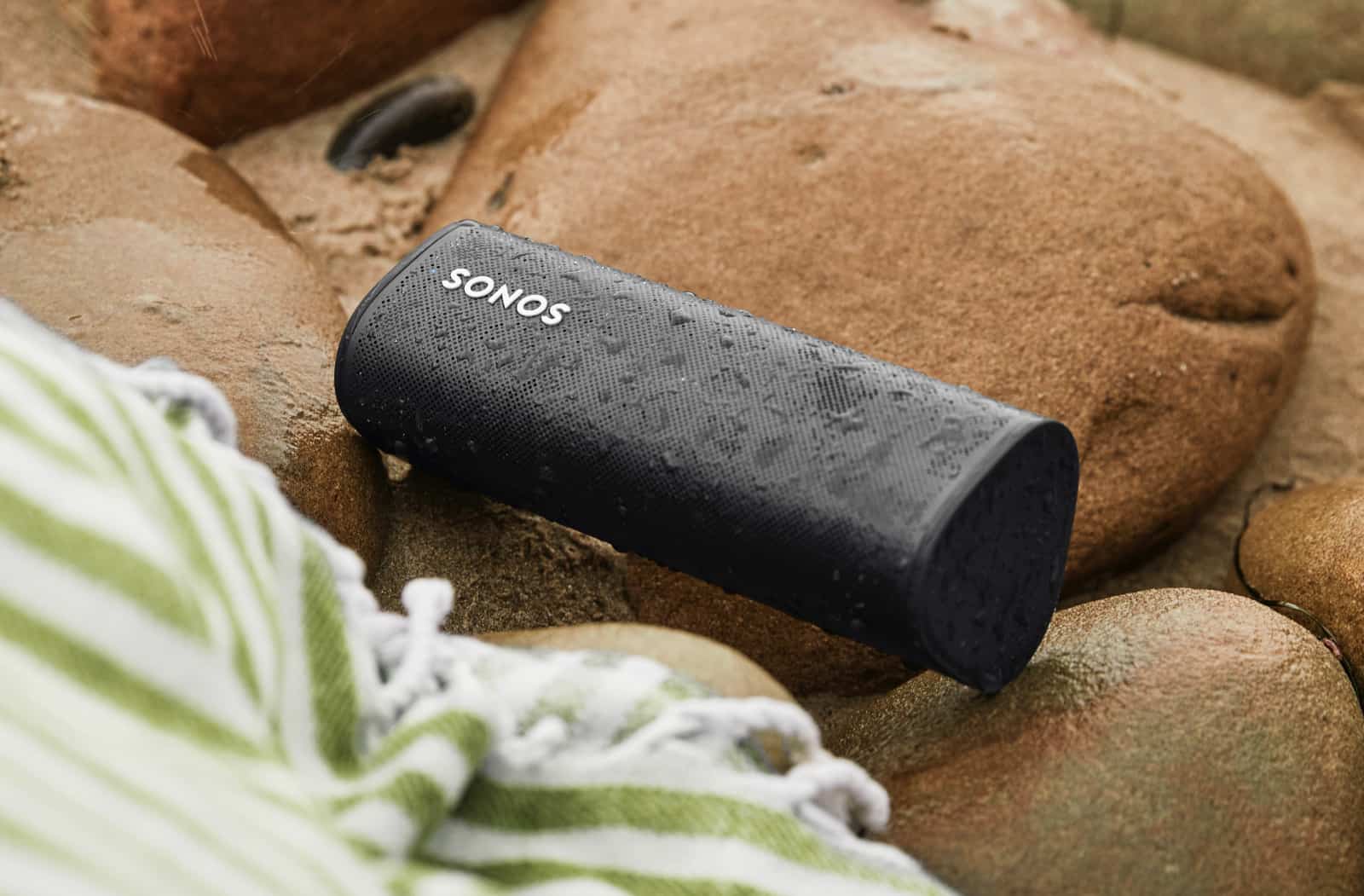 “We started with a very high Class D amplifier, but converted it to an H to get more out of the battery,” said Daniel Casner, Product Creation Manager at Sonos, who told Pickr that the hardware was built to deliver power, but not at the expense of the battery.

“When at full blast, it [the Sonos Roam] works like a Class D, but as the volume comes down, the [Class] H is able to lower the supply rail for just what’s needed to render the music, so we don’t waste any energy from the battery,” he said.

The battery inside is built to last up to 10 hours of continuous playback, and up to 10 days in sleep mode, so it’s not exactly small, so it needs a good system to keep it regulated. Essentially, it all works together with the digital signal processor to know what’s coming ahead in the sound source, and change the amount of power that’s needed to give the listener the best balance of power and energy usage based on what they’re listening to.

That delivers the output needed to make a small Sonos sound like a big one, but it’s only one part of the package, because there are microphones onboard to help make the system better, thanks to TruePlay. 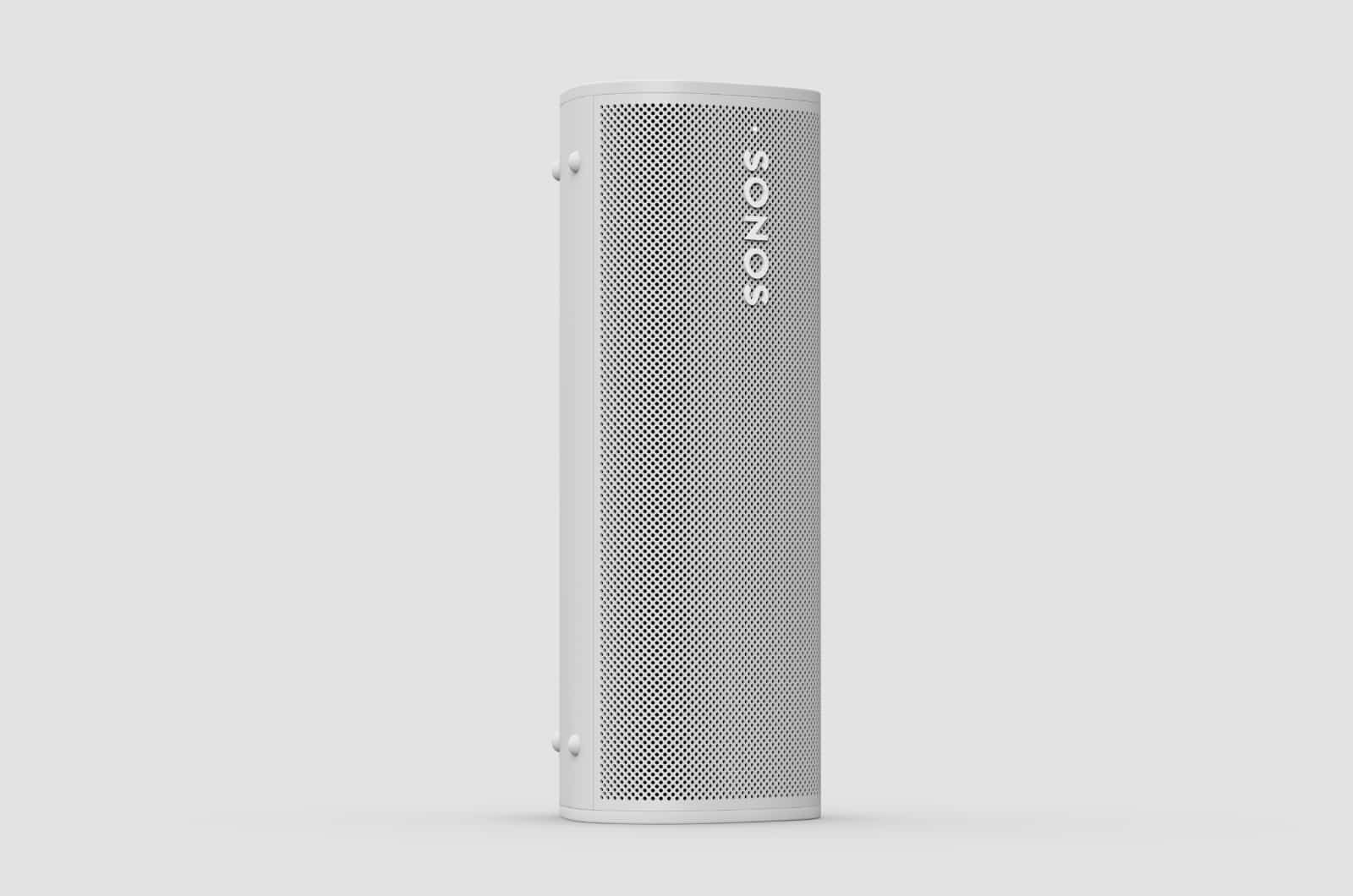 If you’re a Sonos customer already, you probably know that TruePlay is a Sonos feature that listens to sound in a room to apply a profile to deliver a sound best suited to where you’re listening. It can make the difference between a speaker in the bathroom that’s echoing against the glossy surfaces, and one that sounds normal because it’s been calibrated to deal with those areas.

Typically, Sonos TruePlay requires an iPhone to tune the speaker against what the microphone hears, but in the Roam, Sonos is trying something different: automatic and always-on TruePlay.

“You have microphones on a speaker, and one of the things they have to do is listen to the echo of the room,” said Casner, who told Pickr that Sonos’ engineers then take that information into account, and retune the audio based on what those microphones hear.

It means that the Sonos Roam can listen to the space it sits in, and use information based on what the microphones pick up on, as well as what the audio file is feeding to the processor, and work out how to tweak the sound profile for the room and the sound. In short, it means the Sonos Roam can do what speakers don’t typically do: it can work out how to play the sound best based on where you are.

We were told it wouldn’t do much at a beach, and it won’t float on water, either. However, it will work out how to cancel some of the reflective sounds in a bathroom or shower, and so the water-resistant Sonos Roam could be used to make your bathing sound a little better than other waterproof speakers might in the first place. 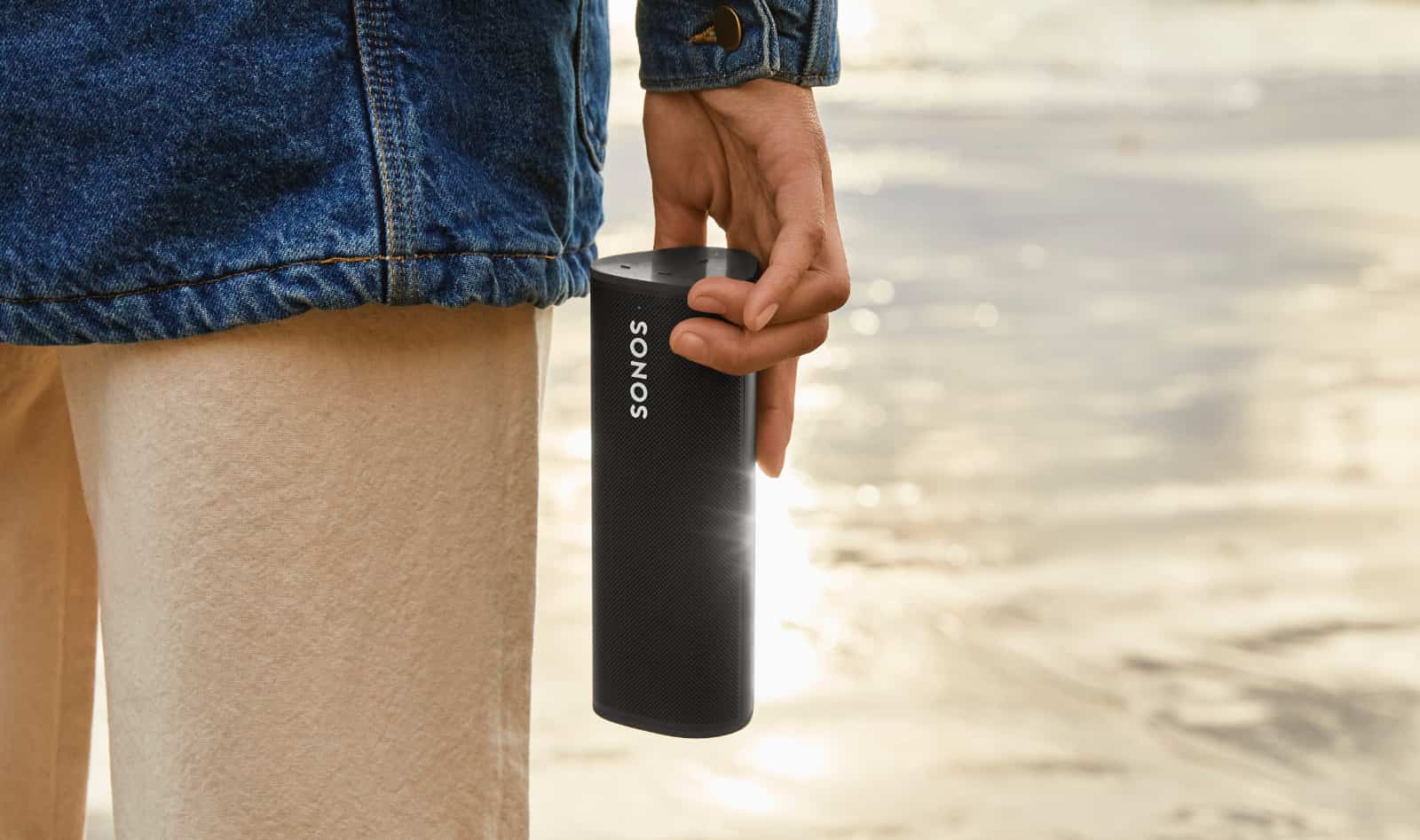 “We built Roam to give customers a way to bring the Sonos experience with them wherever they go,” said Patrick Spence, CEO of Sonos CEO.

“Roam provides the opportunity for millions of new customers to get started with Sonos, and is the right product at the right time as we begin to gather again with friends and family,” he said.

What the Roam won’t do yet

While the Sonos Roam can do quite a bit, and can even be wirelessly charged using the Qi charging standard, it’s not exactly a Sonos One made to go, because there are things it won’t do.

It won’t work as a rear speaker for other Sonos speakers, or at least not yet, with portability being the main focus of the Roam. There’s also no support for Sonos Radio HD out of the home (again, not yet), and there are only two colours: white and black.

And while there’s voice Assistant functionality for both Amazon Alexa and the Google Assistant, it only works inside a WiFi network, but not on a Bluetooth connection.

What the Sonos Roam costs, weighs, and when you can get it in Australia

But it’s a start, with the approach being on getting a small Sonos that can not only get more people into the Sonos system, but give them a good reason to take their speaker out and about.

The Sonos Move is an example of that, but at close to 3 kilograms, it’s not an easy portable speaker. At 430 grams, the Sonos Roam is totally different, and totally small, to boot.

It’s also less pricey, sporting a $279 cost in Australia, just $20 shy of the $299 that is the Sonos One, what was previously the least expensive of the Sonos system, outside of IKEA’s Sonos speakers, which can be found for less.

Australians can expect to find the Sonos Roam in stores from April 20, alongside much of the rest of the world, priced at $279 in black and white, and chargeable on USB Type C, while it will handle any Qi wireless charger, though there’s a special magnetic charger coming for $79, too. 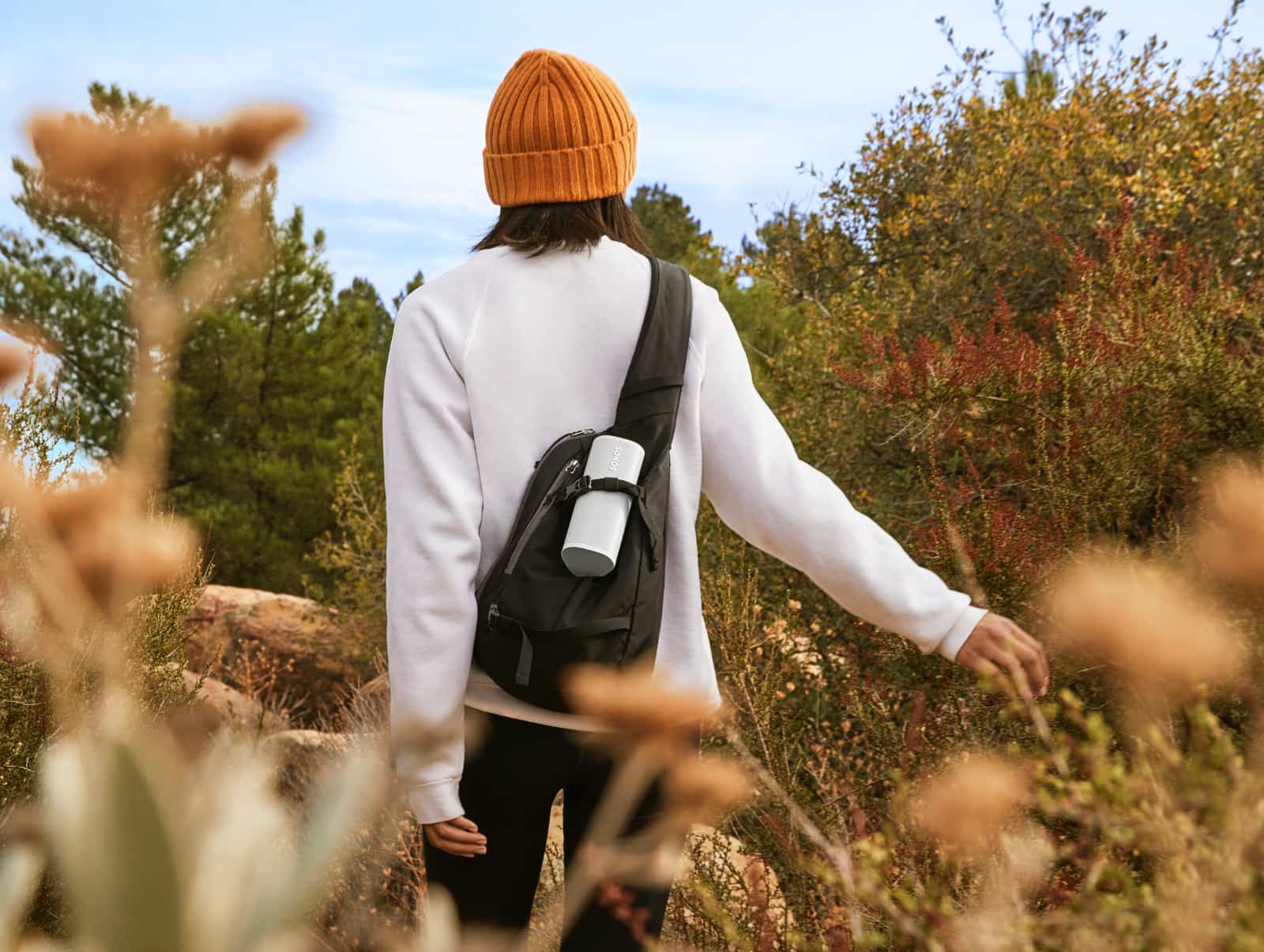