Picking a pair of noise cancelling headphones from the world’s best isn’t easy, so if you had to choose between Bose and Sony, which wins?

There’s some pretty serious competition out there in the world of noise cancelling headphones, and if you’re looking for a pair today, there’s a good chance your looking at two models. Even if you consider a pair from Beats or Bang & Olufsen, two of the more popular pairs are from Bose and Sony, with the original noise cancelling brand replacing its Quiet Comfort range last year, competing with Sony more and more in recent years.

In fact, while Bose used to set the benchmark for active noise cancelling headphones, Sony has been pushing hard since 2016 ever since it released the 1000X series. From the first time those headphones launched at IFA 2016, we’ve seen Sony take on Bose with renewed energy, so much that the Sony headphones are rated among the best wireless headphones you can find today.

If you’re looking to buy a pair of noise cancelling headphones right now, you’re likely to check both brands, though, because neither has lost steam, and that means checking out their respective entries, the Bose Noise Cancelling Headphones 700 and the Sony WH-1000XM3.

So which is better? We’ll pit the Bose 700 noise cancelling headphones against the Sony WH-1000XM3 and find out. 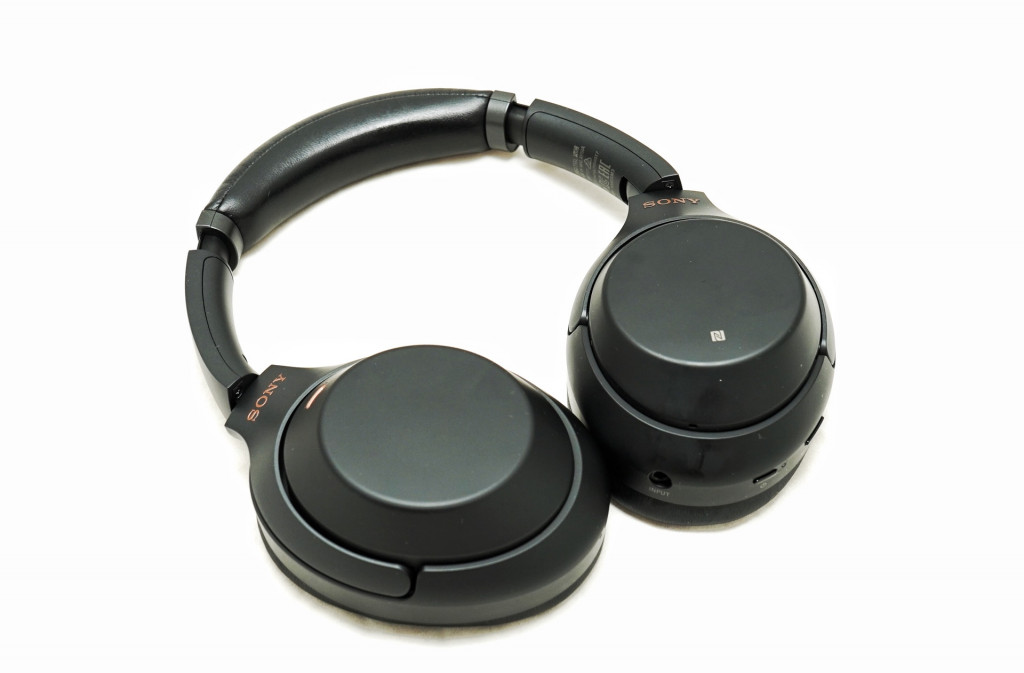 How many ways are there to make a headphone appear modern? Turns out there are enough, and both the Sony WH-1000XM3 and Bose Noise Cancelling Headphones 700 offer distinct approaches to the way larger headphones can look.

Sony’s 1000X series has seen updates through the years, and while we kind of liked the fake leather textured exterior, the smooth matte surface of the current generation is easily the better of the range, offering accents of colour in spots around the headphones. 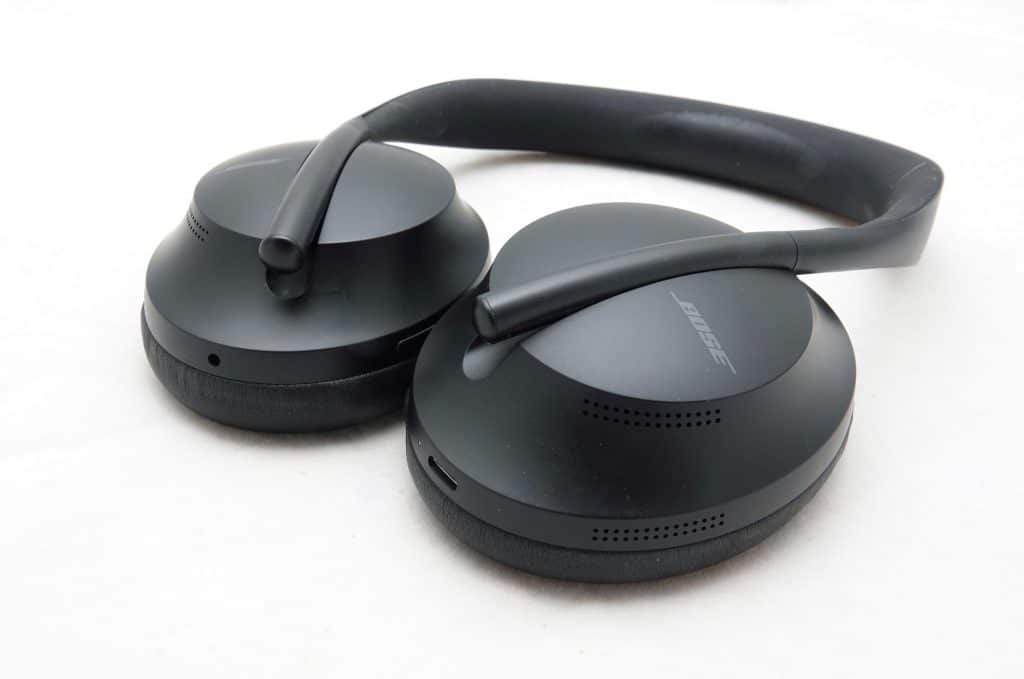 Meanwhile, the Bose 700 headphones opt for a decidedly more HiFi take, a change from the Bose QC35 model before them. Now, instead of a pair of obviously large headphones taking front and centre, the band is the key point, slicing each ear in half.

Both models look great, truth be told, so there’s no clear victor here, only winners all round.

Once the best for comfort and fit, Bose no longer has the edge you might think it previously did.

While the Bose QC35 II have long been seen as one of the comfiest pair of noise cancelling headphones around, alongside the Bang & Olufsen H9i, the Sony WH-1000XM3 are pretty comfy themselves, while the Bose Noise Cancelling Headphones 700 don’t feel quite as comfortable as their predecessor. They’re good, but they’re not the QC35, it seems, thanks in part to a new design.

Both Sony and Bose headphones are about as comfortable as each other, even for long periods, but if Bose had retained the proven design from the QuietComfort range of headphones, we suspect Bose would have come out on top. For now, we’ll call it a drawer. 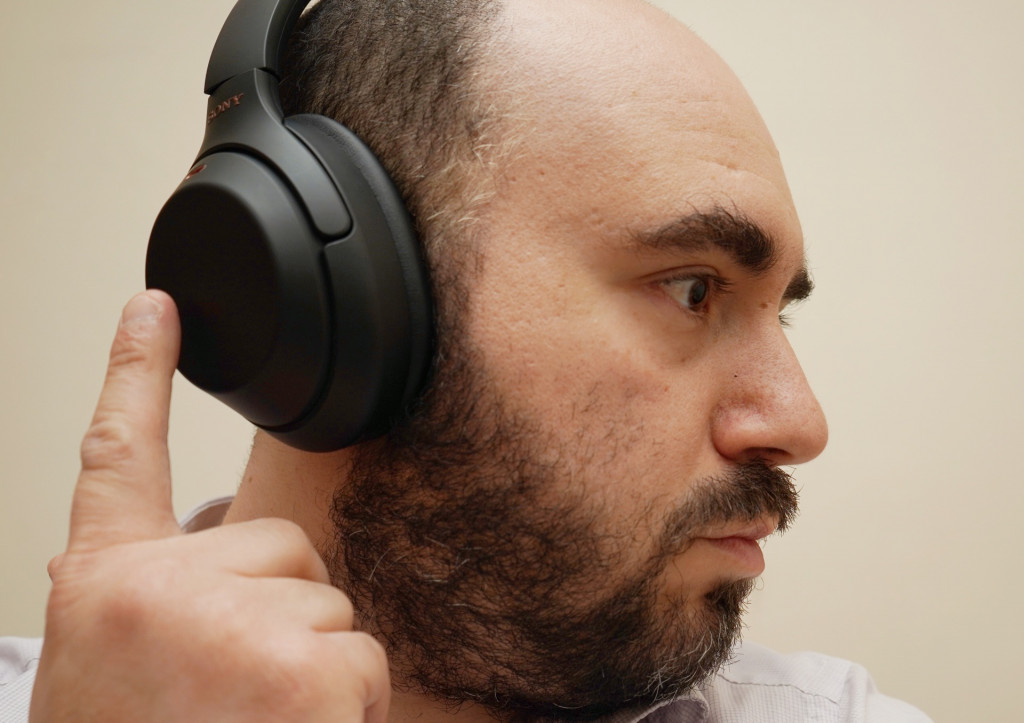 However there is a definite leader in the competition between controls, with Sony edging out Bose here.

While both the Bose 700 headphones and the Sony WH-1000XM3 offer touch sensitive controls, the Bose variation feels a little smaller and more constrained, compared to the large pad on offer from the Sony headphones.

Neither is entirely built on touch surfaces, and there are physical button controls for both, however Sony’s headphones feel like they’re more developed on the control side of things.

The same is true on the app side of things, with the Bose app not only minimalist, but little unreliable to set up, too. Bizarrely, you need to let the Bose 700 headphones register online to use the app, even if you don’t need the app to use the headphones, and we found the Android app worked more quickly than the iOS app.

On the other hand, the Sony app works straight away on either platform, and not only offers a way to trigger the adaptive noise cancellation, but also allows you to change the soundstage and where the sound is coming from. It’s a little better developed overall, and since release has seen an updated feature that brings in wind cancellation.

Both win in connection and reliability, however, with a solid Bluetooth connection for either.

Both the Sony WH-1000XM3 and the Bose Noise Cancelling Headphones handle wireless connections beautifully, and both offer wired connections, too.

Granted, the Bose 700 uses the less common 2.5mm to 3.5mm connection, while Sony uses the standards 3.5mm to 3.5mm, but we think both win this category. 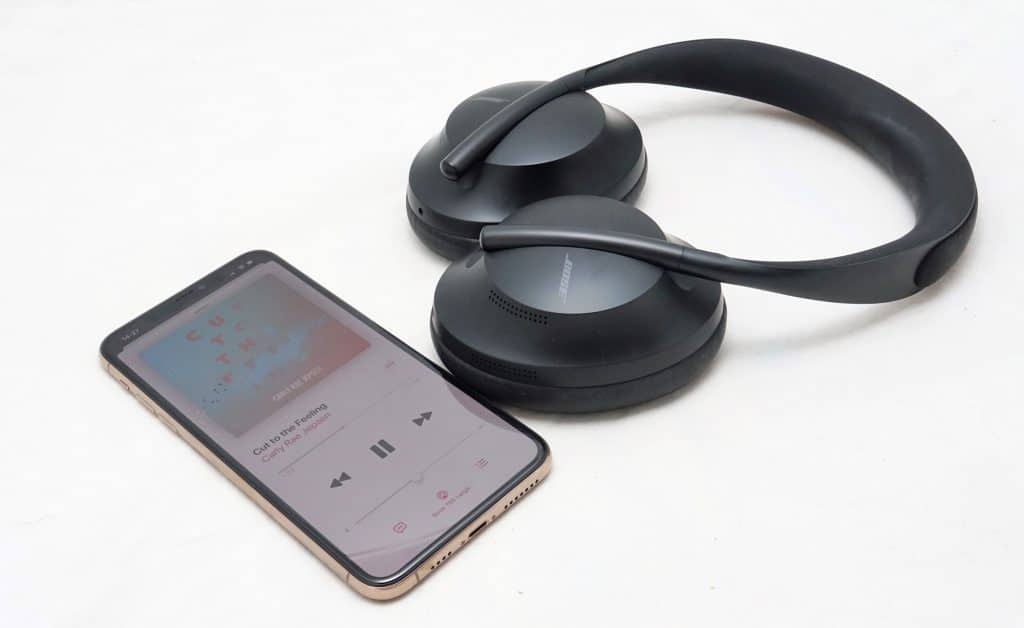 Among the most important of the headphone features, sound quality is definitely up there for both brands. There’s clearly no point in buying a pair of headphones if the sound isn’t great, and good news for either pair, because the sound is great here.

The sound is also quite different in each, though we have a clear favourite above all.

If you like balanced sound, Bose and Sony both offer it, though the Bose reads as very balanced with little personality. It’s not a bad sound at all, just more of a flat one, with a sound that is the way it was intended.

Sony’s approach is a little more like a pair of great speakers, adding warmth to the rendition and experience. There’s more nuance and personality, and the experience is one that you can definitely notice upon wearing them.

Both headphones sound excellent, but we’d give the better sound to Sony’s pair. 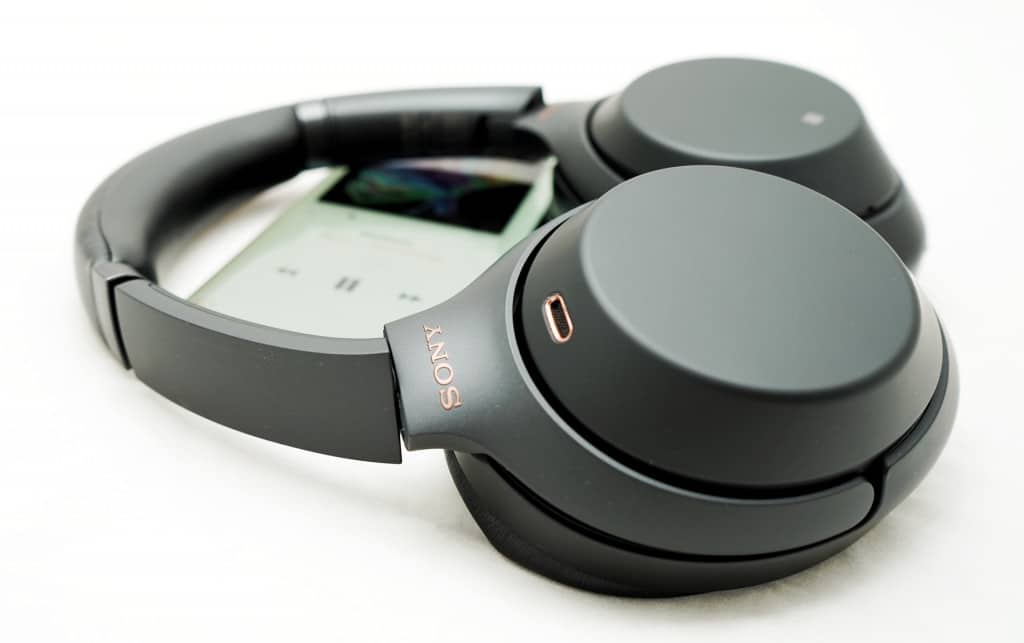 An area Bose absolutely nails, however, is with regards to the microphones. If anything, that’s the category we came away more impressed with in our Bose 700 review, with more microphones that pick up on your voice more clearly.

Sony’s microphones don’t do a bad job, but overall, we found the conversation as we walked about was clearer when using the microphones on the Bose 700 headphones.

Noise cancellation is also a winner for Sony, thanks in part to its ability to trigger a form of adaptive cancellation.

While both the Sony WH-1000XM3 and Bose Noise Cancelling Headphones 700 are strong contenders for some truly solid noise cancellation, Bose basically just lets you define the noise cancellation level and how it works in relation to ambient noise. Sony does too, but Sony’s cancellation can be reconfigured based on altitude and fit, providing something that is a wee bit more adaptive overall.

Officially, the Bose Noise Cancelling Headphones 700 sport up to 20 hours of battery life, while the Sony WH-1000XM3 headphones get the total up to 30. Ten hours difference gives the winning spot to Sony this time. 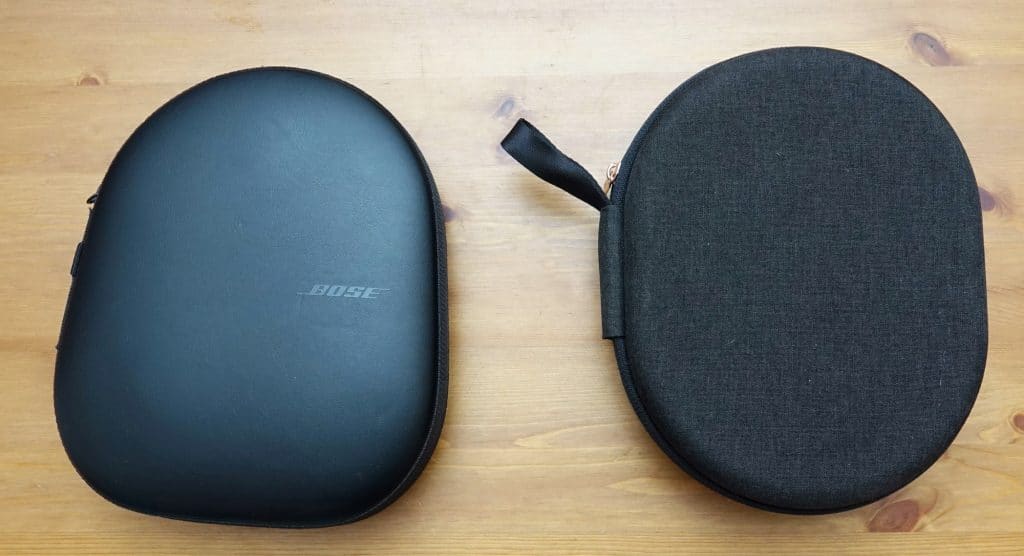 Both come with a nice case, too, with a hard and flat case that protects both headphones nicely, and a loop to attach a carabiner to each, though neither includes that.

No clear winner on the case, and each is about as nice as each other.

However with totally different prices, Sony feels like it nails the price argument a whole lot better than Bose.

That’s a dramatic difference in price, and given you get a few more features, is really hard to argue with. 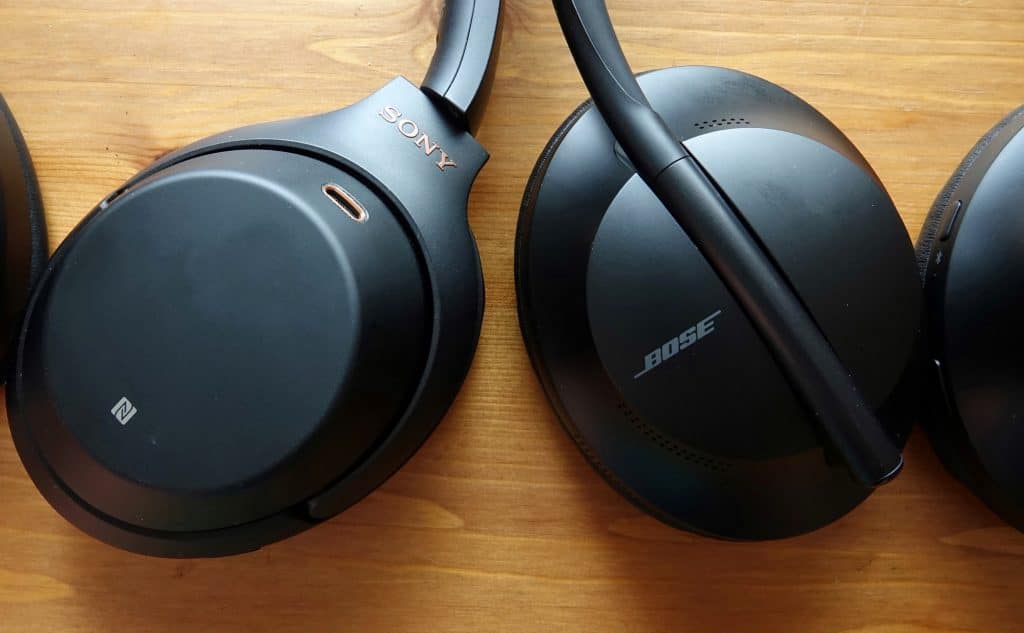 Tallying up the scores, it’s not hard to see that we prefer the Sony WH-1000XM3 over the Bose 700 headphones, though whichever you choose, you’ll be happy with the results.

While Sony’s headphones stand over the Bose variety this time, it may not be too long until Bose returns with a better pair of headphones, or we see something new from Sony, too.

Regardless of which pair you end up with, both variety are among the best wireless noise cancelling headphones around, and your ears should be happy with either. 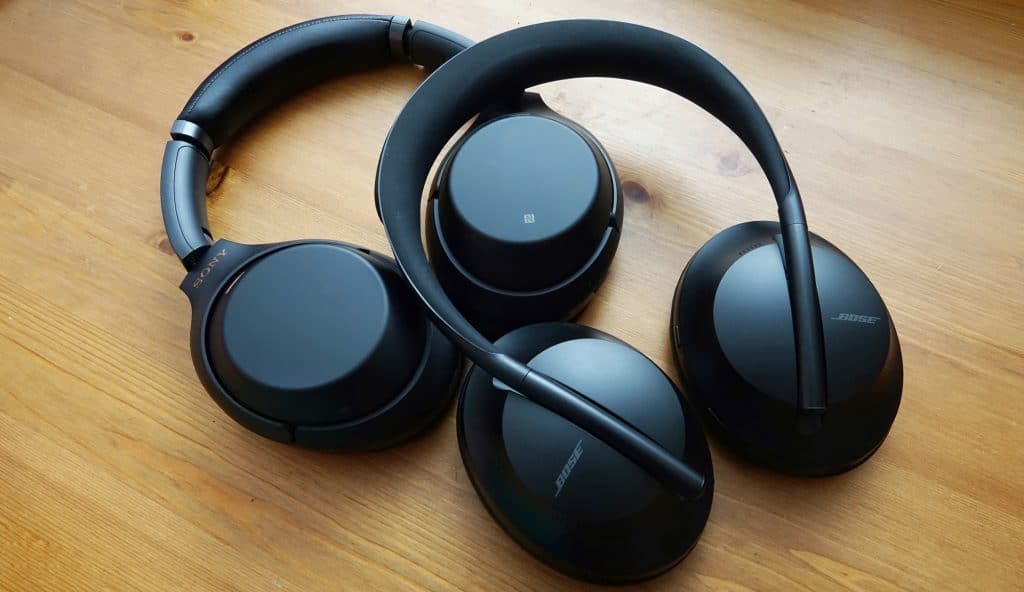