It’s not unusual to consider a pair of earphones to indulge yourself in a bubble of sound, but the Sony LinkBuds is different, letting you hear the world while still listening to your tunes. Do the LinkBuds work, and are they worth the $249 price in Australia?

A little different from your regular earphones, the LinkBuds aren’t so much about blocking your ears and letting you listen to your world of sound, but rather focus on listening to the world and your sound. They’re a little like having your own personal soundtrack, but in a pair of earphones, making them an open-audio style of sound.

Open-audio isn’t a totally new concept. Bang & Olufsen’s Earnest earbuds deliver a version of it, and you can typically find it in fitness earphones, because the idea is to leave your ears open so you can listen to two things: the world and your tunes. Even the Bose Frames are a form of open audio, like giving you a personal soundtrack of sorts.

Sony’s LinkBuds form a version of this, but do it a little differently, with a pair of earbuds or earphones that feels like they’re made from two distinct sections. At the top, there’s a bulbous section with the touchpad for controls and tech, while the bottom has a circular ring section that sits inside your ear. It’s a unique look with a 12mm ring driver, featuring a hole in the centre to give you sound but still hear through the earphones.

They’re small and lightweight, resulting in 4 gram earphones that are impossibly small and light, and hold into the ear using an earwing gel to keep the fit solid.

The LinkBuds rely on Sony’s Digital Sound Enhancement Engine (DSEE) to handle the audio with support for Sony 360 Reality Audio if you want that, while the earbuds are also IPX4 water resistant. 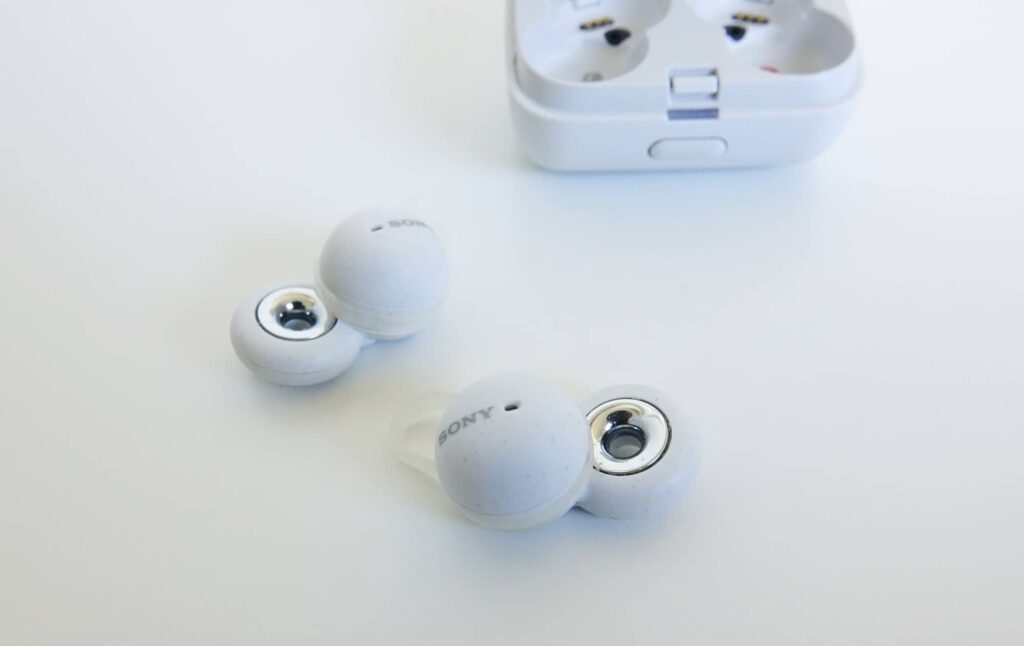 What they don’t have is your regular set of controls. There’s a touch panel on the side you can tap — the bulbous section of the earphones — but the main method of control is something a little cheeky, and we mean it.

Called “Wide Area Tap”, it relies on the vibrations of your face to control the earphones, basically turning your cheeks into a form of music controller.

The idea works similarly to how you might control earphones by tapping on the surface of each side, except the controls are transferred to the skin near your ear. Depending on how your head is shaped, that’s the skin in front of your ears, but also down to the cheeks. Tap twice on either side of your face to pause and play, tap three times on either to skip a track. You can also customise those buttons using preset options from the Sony Headphones app, giving you a little more control when you tap your skin and cheeks. 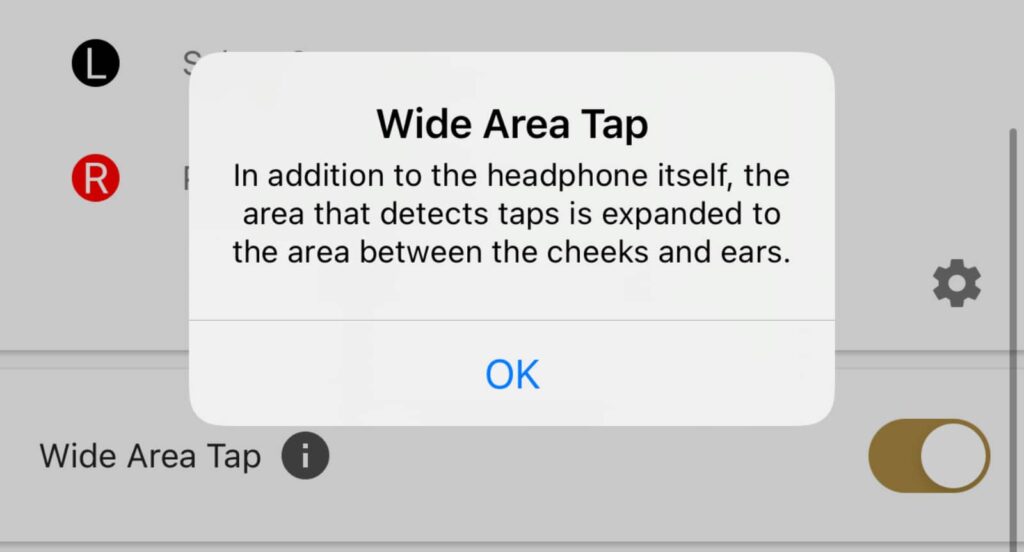 Ultimately, Sony’s Wide Area Tap is a novel approach to controls that doesn’t have you trying to remember where the control surface is on a pair of earphones held in place deeper in your ear, and basically mean you can tape your face lightly to control the music. Alternatively, you could get a friend to slap you to change tracks or wake you up, just not on the stage because you’re angry about a joke.

It doesn’t always work, mind you, so you might want to tap (or slap) a few times to get the vibrations strong enough to work.

Once you work out the controls and you’re over violence to your face — seriously, a simple tap should do it, no need for an obviously violent form of aggression — it’s time to get stuck into the sound, which as usual for our earphone and headphone reviews is tested using the Pickr Sound Test.

That starts with electronic, which kicks off with Tycho and Daft Punk, delivering a surprisingly balanced set of highs and mids, while bass is subdued. The big bass drop in our lead song “Glider” is missing in action, the heavy bass nonexistent, with the thump of bass lacking overall. 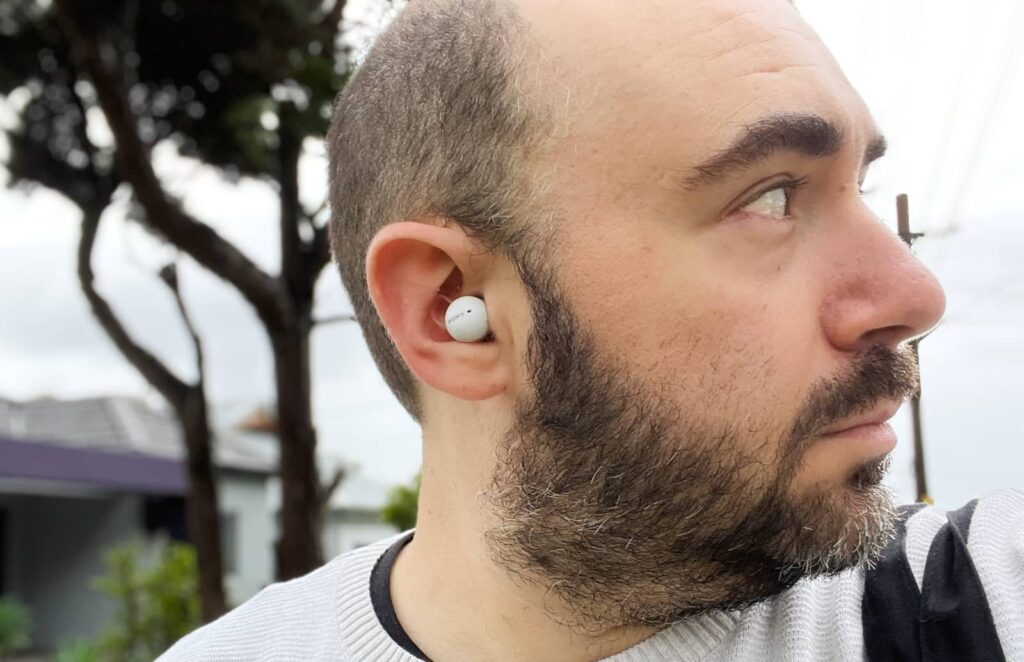 It’s a similar feeling in pop and R&B, with Carly Rae Jepsen relatively solid but lacking hefty punch, with the same in tracks from Ariana Grande and Charlie Puth. Shifting into rock and classical, the obvious lack of over-emphasised bass isn’t as easily noticed, but the bass is a little lower than where you might want.

Overall, it’s an acceptable sound that’s easy to listen to, but depending on what you listen to will feel like it needs a little more oomph and depth.

The good news is that it’ll still sound good as you go about your walking and dealing with the world, something the LinkBuds are good for.

Using the LinkBuds, you’ll find a little over five hours of battery life using the earbuds, with an extra 12 or so in the charging case. That’s a little on the low side, especially given other earphones typically offer closer to 20 to 30 in the case, while the runtime for the earphones isn’t bad overall.

You can probably attribute that mediocre case life to the size of the LinkBuds, which is quite small overall. Seriously, the LinkBuds are one of the smallest pairs of earbuds we’ve ever seen. They’re truly compact and portable, and possibly able to fit into the coin pocket of your jeans, though they would puff out a little bit, because it’s a puffy case. 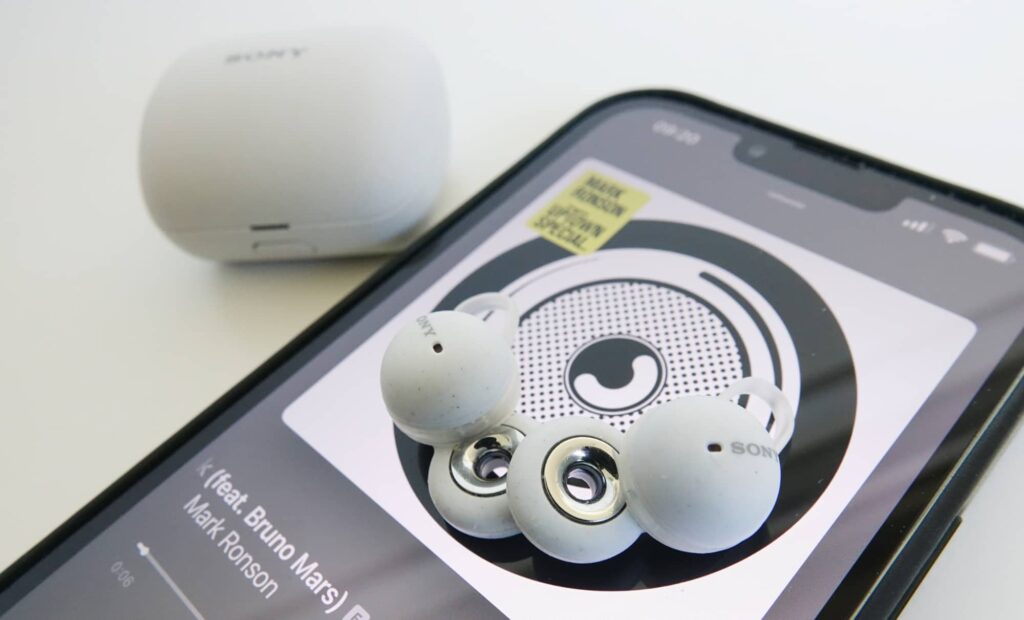 But priced at $249 in Australia, it’s pretty clear what exactly Sony is targeting with the LinkBuds, with the AirPods 3 firmly in focus.

While the latest generation of the Apple AirPods are worth considering at $279, Sony is hoping its $30 less LinkBuds offers something similar in the open-audio style of listening, but with a more compact style at the same time.

They definitely offer that, too. The LinkBuds are compact and cool, and the pricing isn’t too bad, though it does rub up against noise cancelling earphone options, and that’s not necessarily a good outcome for Sony’s ANC-less earphones.

There is no noise cancelling found in the LinkBuds, and not a lot in the whole microphone area. These will work for talking to friends and family over the phone, but they’ll also let all the noise in, so you can hear the world and your music at the same time, but never can you cancel it out.

At the $249 mark, Sony is also competing with the excellent Beats Fit Pro, which offer the same sound and noise cancellation profile as the more expensive Apple AirPods Pro, and can have their mics switched on to let you hear the world, as well.

Throughout all of this, one thing is quite clearly missing from the package, or more subdued from it all: bass.

There’s not a whole heap of bass to get you moving, with just a light touch available in the LinkBuds. That may not be a problem for you if you’re not listening to a lot of warm or earthy music, but it is something to be aware of.

The comfort isn’t a super strong point, either, because while Sony lets you listen to the outside world, wearing the Link Buds for longer than three hours can seriously grind at your ears. 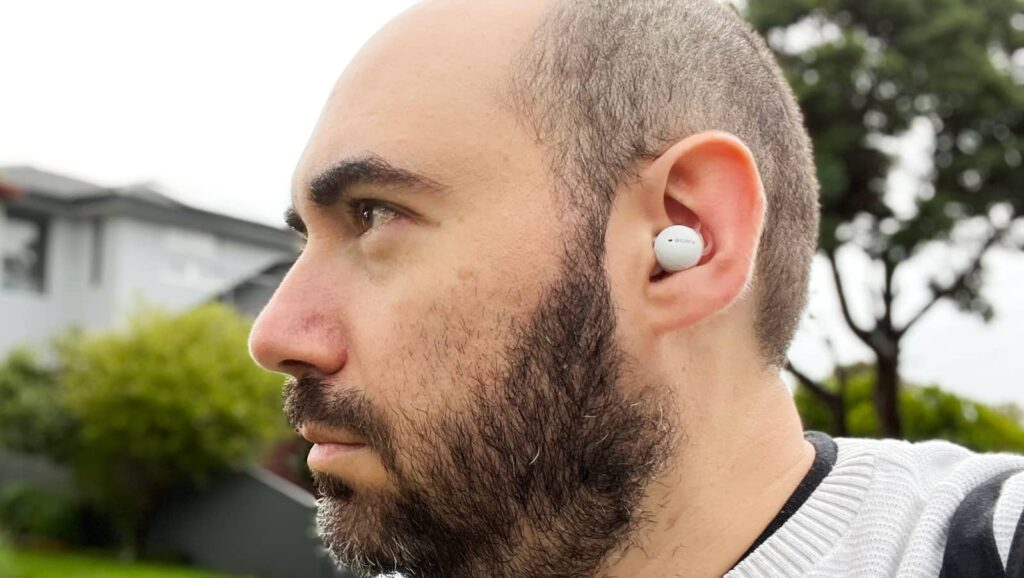 Comfort and Sony seem to be at a bit of an impasse at the moment, because while we loved the Sony WF-1000XM4 noise canceling earphones last year, the comfort was arguably hit and miss. In the LinkBuds, there’s more of that going on, because while you can find them comfy for a couple of hours, push into your three and four and they lose their softness on your ears.

It’s kind of strange: it feels like Sony is marketing the LinkBuds as earphones you can wear practically all day and still pay attention to colleagues and meetings, really just having that backing soundtrack going on in your mind amidst it all relayed by them. They last nearly six hours before needing a charge and you get two charges in the case, so you could theoretically wear the LinkBuds throughout work, taking them off for calls, for select meetings, and so on and so on. And yet, they’re just not comfortable enough to last the space of the day. That’s the flaw.

We also really need to point out that what Sony is bringing in the LinkBuds isn’t a new concept. Not at all.

Back in 2018 when the Ear Duo was an experimental concept from Sony’s Xperia phone range, the idea of open audio through a truly wireless set of earphones was largely foreign.

Four years later, that’s truly not the case. Nearly ever pair of noise canceling earphones and headphones supports a transparency mode that does the same thing by simply switching on the mics and letting you hear the outside world through the headphones. That’s not new at all. Hell, Sony was one of the first companies to perfect it in its first pair of premium noise canceling headphones back in 2016, the MDR-1000X.

These days, every pair of premium earphones supports a HearThru transparency mode using microphones, and even some less expensive models, such as Jabra’s Elite 3, which lack noise cancellation but still have microphones to let you hear the outside world through.

That’s really the main problem with Sony’s LinkBuds: as cool as the concept is, and as neat as a new ring-shaped driver is, there are better earphone options that do the same thing offering better comfort and value overall. 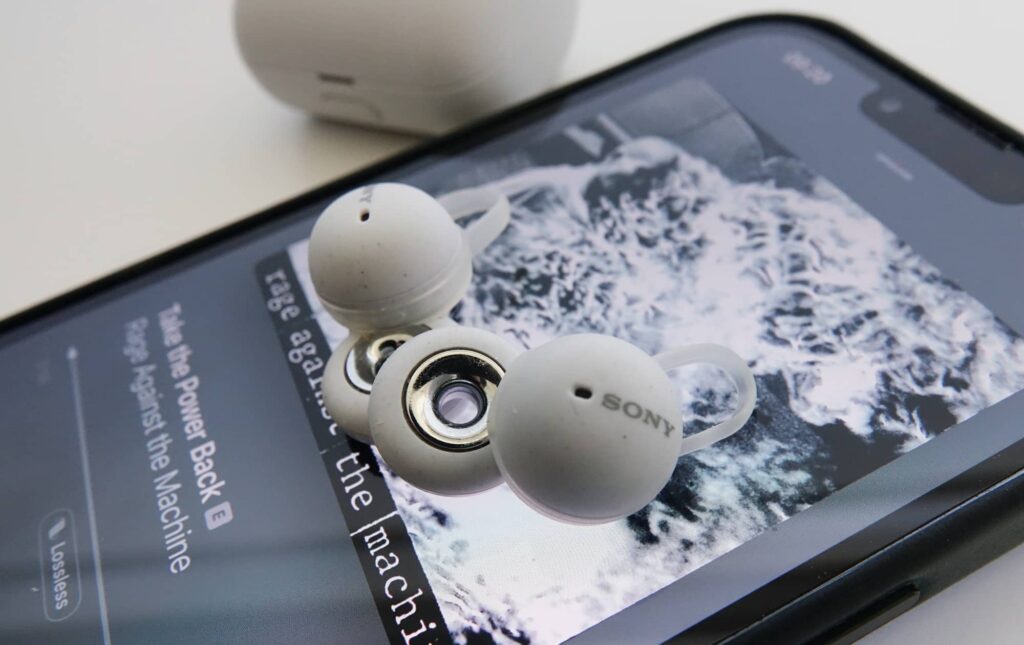 If you’re a big fan of music and someone not keen on having to stop listening to do other things, there are definite reasons to consider Sony’s LinkBuds. They’re great at letting you keep listening while still hearing everything else, and they’re seriously compact, as well. There aren’t many earphones this good at keeping the size down.

But size isn’t the primary reason to consider the LinkBuds; you’ll look at these if you’re keen to keep hearing the world and your tunes alongside each other. For $250, they’re definitely good for that, though the comfort can be hard, and you mightn’t like how they feel past the second or third hour.

Frankly, if you can get past the comfort and subdued bass, the LinkBuds are a cool way to keep listening amidst everything else. We think Sony could clearly improve on the design, but they’re a neat way to listen throughout the day. 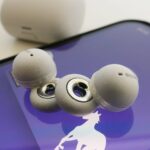 Sony LinkBuds (WF-L900)
Features
Design
Performance
Ease of use
Battery
Value
The good
Incredibly compact and pocketable
Surprisingly decent audio
Cool new driver design
Holds position in the war nicely and better than you'd expect
Wide Area Tap provides a cool method to control that uses your face without sticking fingers near your ears
The not-so-good
Light on the bass
Not a whole lot of long term comfort
Many earphones offer transparency features these days, so the LinkBuds aren't a major leap
A little pricey for what they are given the range of noise cancelling earphones out there
4