Apple has a big new screen, and it supports a whopping 5K resolution. Going beyond 4K, what else makes the Apple Studio Display tick, and is it worth the minimum $2500 price?

What is the Apple Studio Display?

If you’ve been paying attention to Apple’s releases recently, you may well know the maker of the Mac has been building some high tech for the high-end. Specifically, folks who want a premium experience for their desk, coming in the Mac Studio and the appropriately-connected Studio Display.

Running off a Thunderbolt 4 connection, the Studio Display is a 27 inch display sporting a 5K resolution of 5120×2880, delivering a pixel clarity of 218 pixels per inch. Also called a “Retina” display, it’s a resolution that isn’t out of kilter with the screens on Apple’s other computers, which typically see over 200 pixels per inch.

It arrives with support for the P3 colour space and one billion colours, while also adopting the white-balancing True Tone technology used on every iPad, with a little more in there, as well. 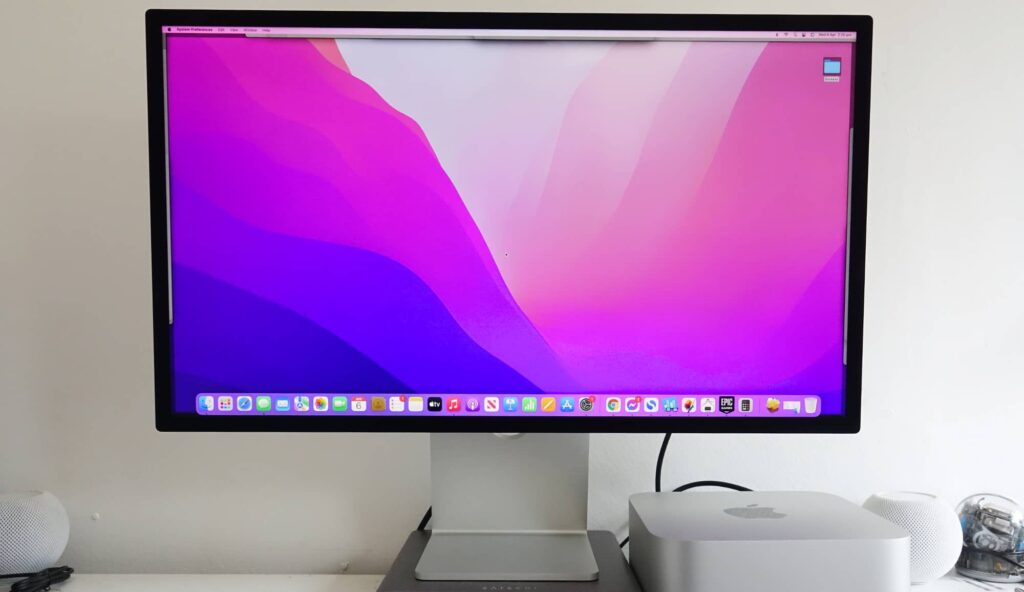 You see, the Studio Display isn’t just another screen, sporting an Apple A13 chip to run a 12 megapixel webcam with Centre Stage, and a six speaker sound system with support for Dolby Atmos, plus three microphones that can use beamforming to pick up on your voice.

There are four Type C Thunderbolt 4 ports on the back, but one will be used for the connection to your Mac, or even to your PC. Whatever you really want to plug this thing into.

Oh, and it comes with a cleaning cloth, though doesn’t come with a height adjustment stand, as that’s a little extra for the Studio Display. Fortunately, you can get a VESA mount if you choose, but it’s one of those things you’ll configure at the point of ordering. 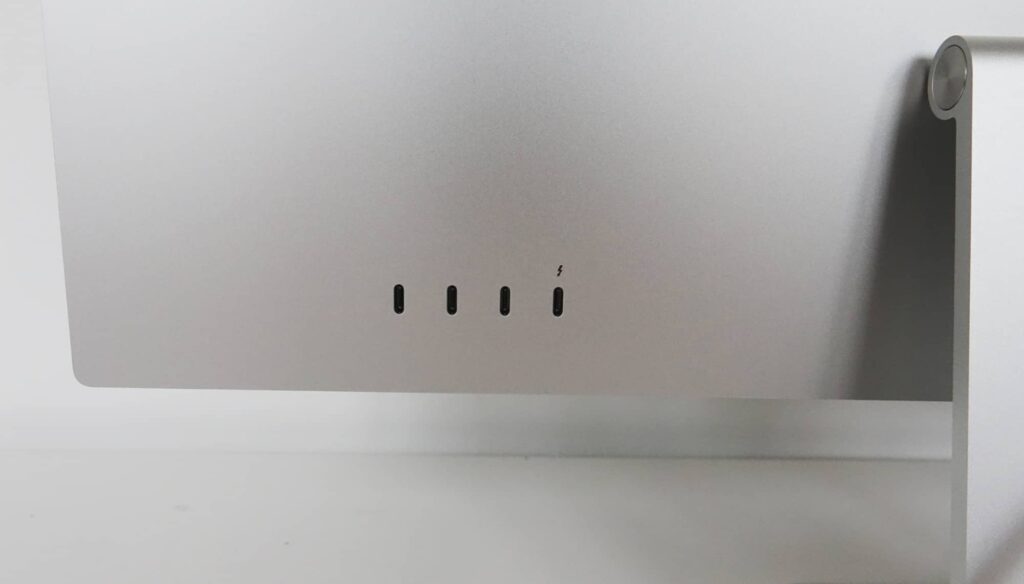 With the name “Studio Display”, it should be abundantly clear what this gadget from Apple is designed to do: sit in a studio and display things.

Of course, you don’t need to have a studio to make the Apple Studio Display work, and you don’t even need to be playing Phil Collins’ “Su-su-sussudio”, either, even if it feels totally on brand. We did through part of the Studio Display review.

Does the Studio Display do the job?

If looking at a pretty screen with snappy visuals is what you’re after, the Stu-Stu-Studio Display is pretty well fit for the purpose, delivering razor sharp clarity, dropping the 5K res down closer to 2.5K, which makes the picture look even better.

Images and details look simply amazing on this screen, and while the ultra-wide Dell we normally work on looks great, there’s something even more impressive about what Apple has delivered here. There’s a lovely panel capable of rendering one billion colours, and your eyes will be treated. 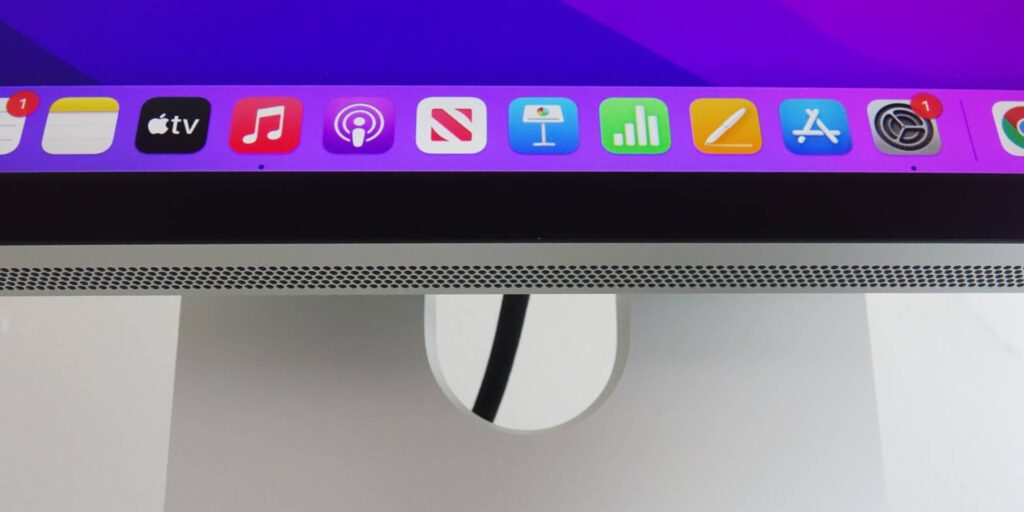 Not just your eyes, but also your ears, especially if you’re a subscriber to Apple Music, with the Studio Display including six speakers to deliver spatial audio, handy for that Atmos Music capability Apple Music added last year.

Six speakers makes the audio experience a little like what Apple has going on its MacBook Pro 16, and while we adored the sound from spatial tracks, stereo music didn’t sound quite as impressive. There’s solid highs and mids found on the speakers here, but the bass felt subdued by comparison, slightly missing unless you walked away.

Tracks from the Pickr Sound Test delivered a nice rendition, but the deep bass drop was missing in action in our first song from Tycho, while the punch from Daft Punk’s “Contact” felt like it was holding back from a full attack.

In rock, jazz, and classical, we found the slightly withdrawn bass didn’t impact things too aggressively, and the sound was a little more balanced here, likely due to the music not being over-engineered.

However, when playing tracks engineered with Dolby Atmos, despite how they’ve obviously seen extra mastering and engineering, we found Atmos renditions played better than stereo. When the six speakers of the Apple Studio Display work together, the listening experience is a vast improvement on what you hear in stereo on this screen. 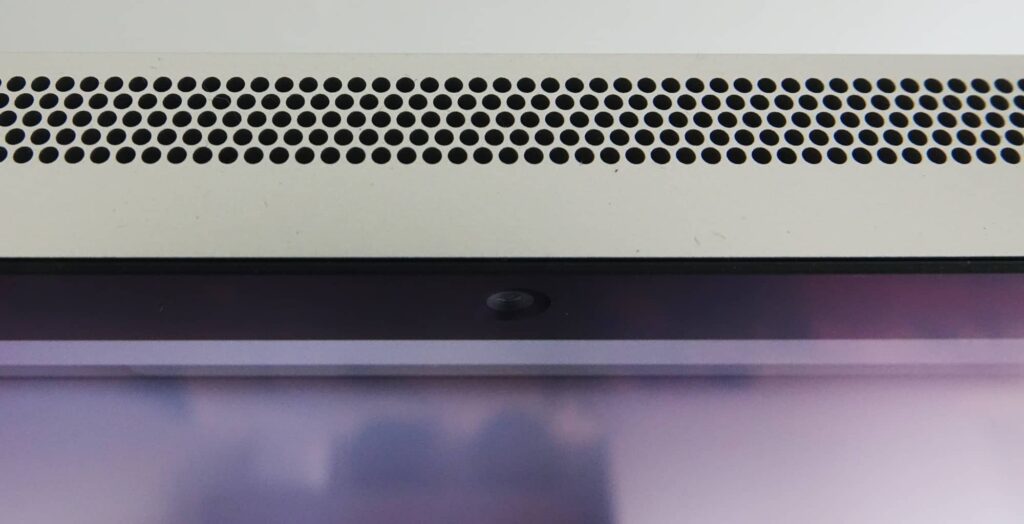 You’ll also find a 12 megapixel webcam on this screen sitting up top, plus an A13 chip, helping to drive that spatial audio feature, support for “Hey Siri” if you use it, as well as a centre piece from iPad models prior, Centre Stage, which focuses in on your face for video conferences, provided you have the feature switched on.

All up, the Studio Display has a little more going for it than mere beautiful visuals, though it has that, too.

Yet as beautiful a screen as the Apple Studio Display is, there are things missing in action, and some of these are genuinely surprising.

For instance, there’s no improvement to the refresh rate, giving you 60Hz only, even when monitors have supported faster refresh rates for years now. You can find gaming monitors supporting refresh rates of 144Hz and 240Hz, while the ProMotion tech on the MacBook Pro 16 and smaller 14 inch model offers a variable refresh rate jumping from 60Hz to 120Hz, improving the on-screen speed while not needing to at times to conserve battery.

And yet that technology is not here.

Despite Apple using ProMotion on its new laptops, it is missing in action on its Studio Display, likely because 5K can’t run beyond 60Hz on Thunderbolt 4, and you’re using a 5K display. Still, it’s strange that it’s there on the new Mac laptops but not on the screen.

This isn’t a deal breaker, mind you. You’re getting a solid 5K picture, and the only other 5K screen from LG also lacks faster refresh rates, likely because of that Thunderbolt 4 limitation. However the lack of support for High Dynamic Range is a little more alarming, a fact that confused us greatly. 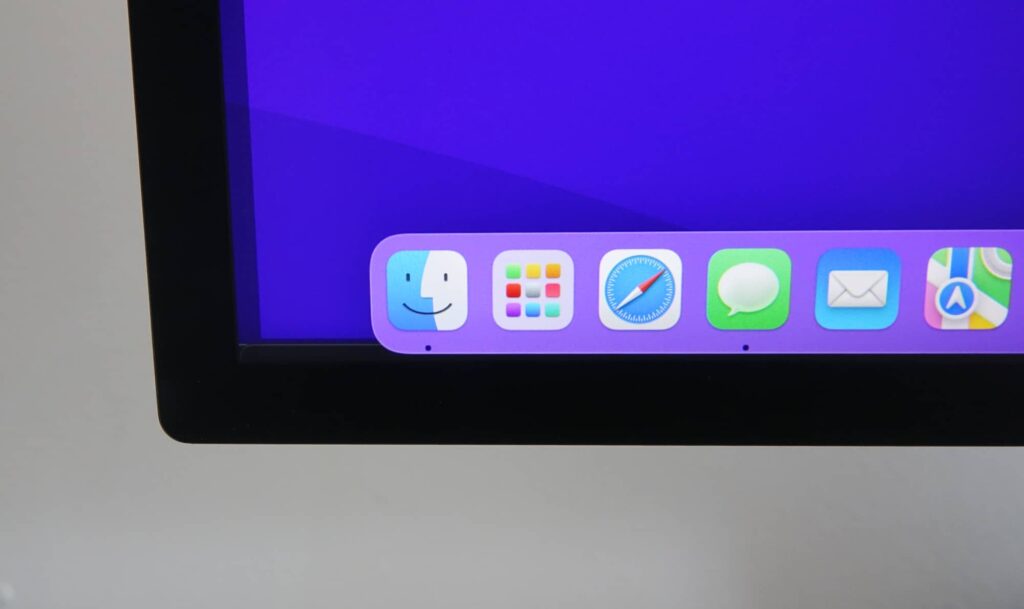 The colour is lovely, the picture quality is superb, but yet there’s no support for HDR in the box, even though the screen looks like it should be able to handle it, and there’s an iPhone chip built into the whole thing, begging the question… why.

It’s a similar situation with regards to high-end display technologies. For instance, there’s no OLED in this screen, even though Apple uses OLED in the iPhone, and there’s no Mini-LED, even though Mini-LED is used in the 12.9 inch iPad Pro.

Both are high-end panel technologies you can find in monitors and TVs, and yet they’re missing in action here. From what we can tell, the massive 27 inch 5K display used in the Studio Display is an In-Plane Switching (IPS) screen like what’s used on Apple’s other Macs, except 27 inches and with a 5K resolution, but it’s lacking the sweet new technology you may expect Apple to bring you.

Interestingly, you also probably won’t actually see the full 5K resolution, even if the Apple Studio Display supports 5K on the box. This is a 5K screen supporting 5120×2880, make no mistake, but Apple’s approach to resolutions is to effectively downsample, improving the picture quality and not forcing you to look at tiny details on a screen.

If you had to, a 5K res would make everything look uber small on a 27 inch display, which is what you get here. By setting the max to 3200×1800 and the default to 2560×1440, Apple is instead optimising the resolution to give you a clear picture with an improved pixel clarity, as it does with other “Retina” screens on its devices, like its MacBook Pro laptop and such.

Is the Apple Studio Display worth your money? 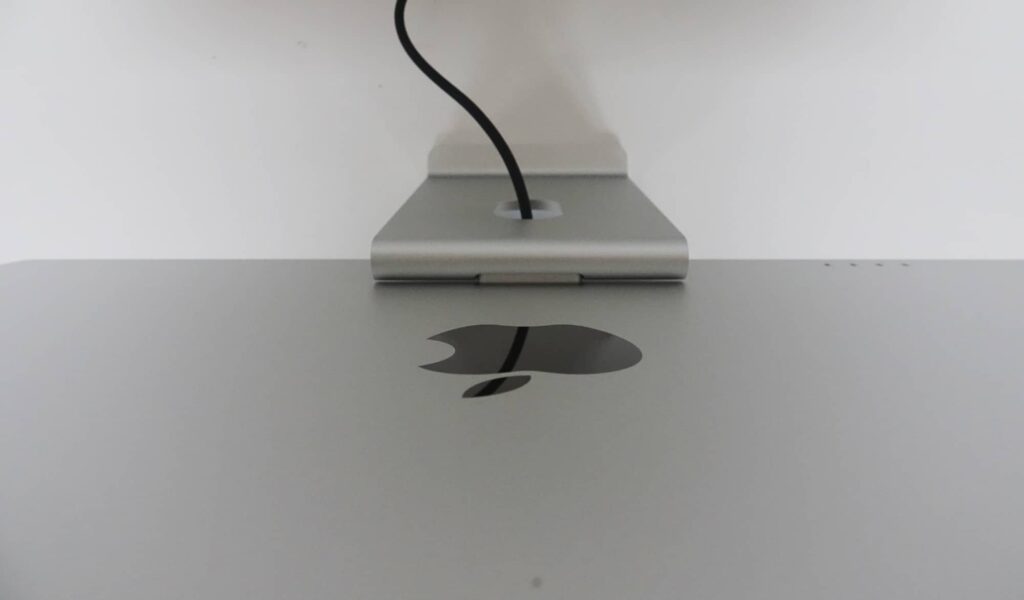 One of the other problems with the Apple Studio Display is the price, which is just so severe, it can make your head spin.

Coming in at an Australian minimum of $2499, the Studio Display is not a cheap screen at all, not by a long shot, and that’s before you add in the option of a different screen glaze to make the screen matte — nano-texture glass, which adds $500 to the price — or even to throw in a stand that supports height adjustments, a feature that adds $600.

Our Studio Display review model featured the nano-texture matt glass, which meant we were reviewing a $2999 27 inch 5K screen, making it quite a pricey display. You can actually spend $3599 for all of that, pushing well beyond the comparative price of a 40 inch 4K OLED TV from LG or Alienware’s 3440×1440 ultra-wide 34 inch QD-OLED option.

Clearly the Apple Studio Display is not an inexpensive screen, and it’s not one that really achieves “value” in any sense of the word. You’re not going to get value against the competition here, though there isn’t much that directly competes. LG has the only other 5K screen, and while it’s $1879 locally, it doesn’t offer the same industrial design or spatial speakers.

However, the Apple Studio Display could actually be worth your money if you’re someone living in an Apple world and keen to get that clarity Apple offers on its laptop displays, but on your desktop.

It’s one of those screens that once you start using, feels like it should never leave, and we’ll be sad to let this one go. Between the incredible industrial design, the beautiful attention to pixel clarity, and the excellent sound system, the Apple Studio Display is worth of a Mac user’s desk easily. You might even find the webcam useful, especially if that laptop always stays closed and you’re regularly working from home, like we are. 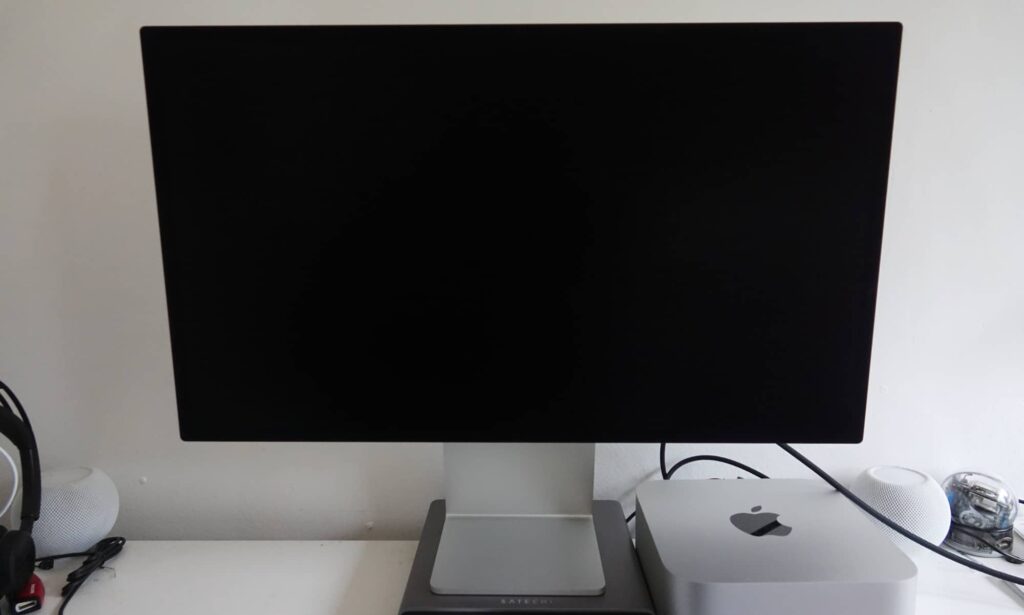 If money was no object, we’d grab a Studio Display. Hell, we’d probably grab two. A couple of Studio Displays connected together, even without the HDR and ProMotion would make the desk look amazing, because the pixel quality would just be that freakin’ excellent.

But money is typically a talking point for most of us, and one that tends to make us weigh up our options more logically. We research our technology, we look for the right product to spend money on for our needs, and then we pick what suits us best. That’s the whole reason for this website to even exist: to help people pick the best tech.

With the Apple Studio Display, you may not be getting the best monitor, even if you’re getting a great one. The lack of a fast refresh rate and ProMotion can be explained, and will probably be fixed in version 2 with Thunderbolt 5, but the lack of HDR, less so. It’s a similar issue for a monitor that needs to add $600 just to get height adjustment, something that comes with so many other monitors. 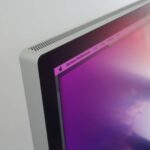 Apple Studio Display (2022 Studio Display)
The good
A beautiful display
Lovely industrial design
Great picture quality
5K screen tech downsamples brilliantly
Very nice Dolby Atmos spatial audio system
Webcam built into the frame
Includes Thunderbolt 4 ports on the back
The not-so-good
Expensive
No HDR
No ProMotion or fast screen refresh
Not a lot of bass in the sound system, particularly when audio is in stereo
It's a 5K screen... but you don't really get the option for 5K resolution on a Mac
Height adjustment costs an extra $600
So expensive, it may well be overpriced
4