Looking for a pair of decent earphones that won’t cost an arm or a leg? The Sony C500 does well in some areas, even if it misses on others.

You can spend quite a bit on a pair of earphones if you really want to, but if you don’t, you also can find some good value earphones out there. The tech is gradually trickling down it seems, and not just coming from the inexpensive brands.

Big players typically responsible for the best-in-class sound devices are also getting in the spirit of things, bringing their expertise to lower price points, and making the world of cheap-as earphones genuinely more competitive.

Priced around the $100 mark, the Sony C500 are a little bit different from the high-end earphones we’re used to seeing from the brand, and focuses on a lower price overall. Is it also lower quality, or has Sony found a compromise to get its understanding for sound into a less pricey package? 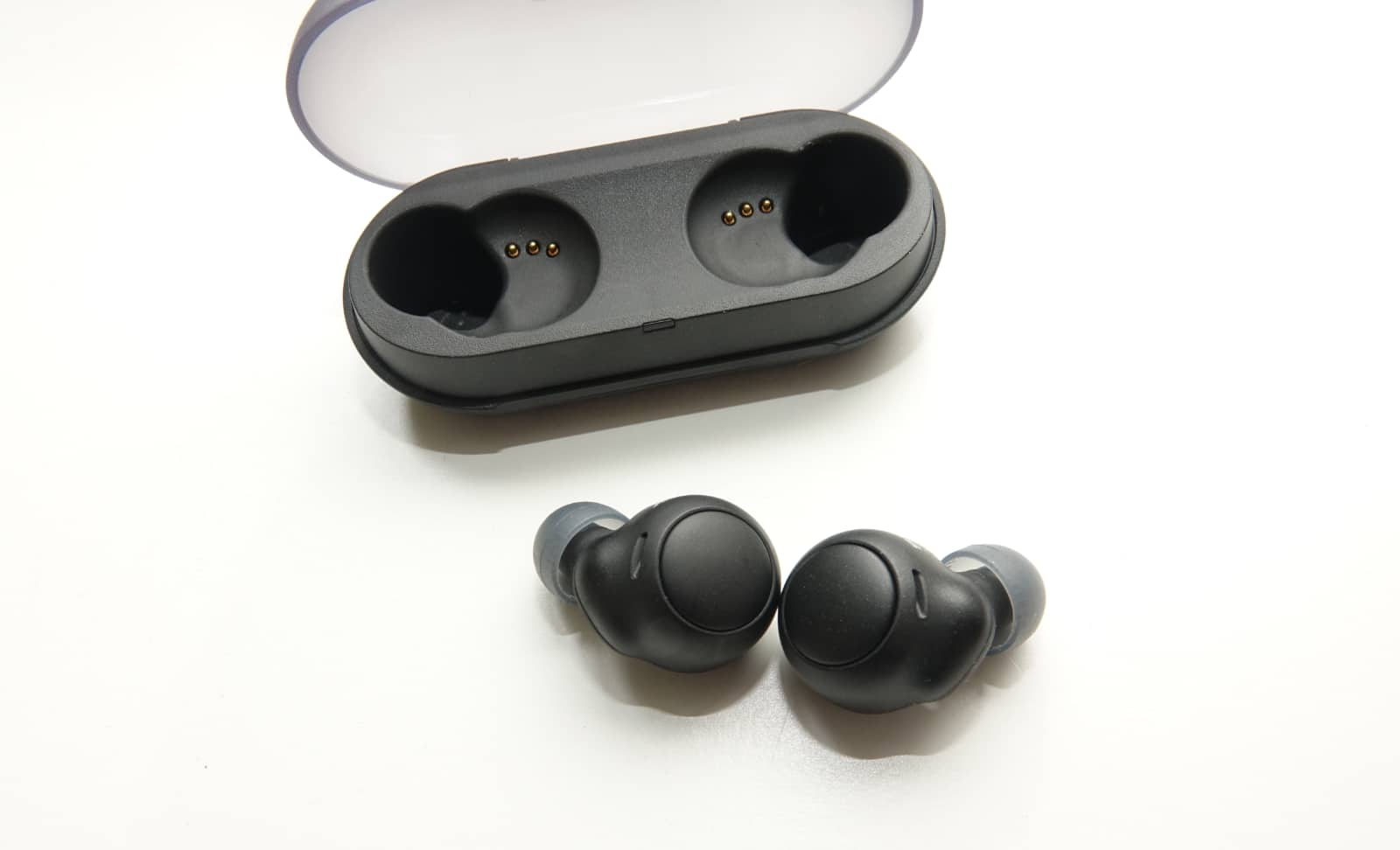 With a circular design and some silicone ear tips meant to fit an assortment of ear holes and sizes, the Sony WF-C500 won’t likely remind you of anything the company has in flagship, and that’s largely intentional: priced at roughly a quarter to a third of its 1000XM range, these earphones are very different.

Rather, they large and more like bulbs, twisting the shape to match the nook and cranny of your ears, and leading that in-ear tip inside so you don’t need to punish your ears too much.

Inside, Sony is relying on a small 5.8mm driver for each ear, with the 5.4 gram earphones including a degree of water resistance, rated at IPX4, handy for sweat and light walks in the rain.

They’ll come with a max of 10 hours music battery life, cutting back to five per charge if you need to talk to people, with an extra 10 or 5 (music or phone, respectively) in the translucent case, which comes with an ordinary pill-style design, charging over the Type C USB port only.

Priced at $129, Sony has added some rather surprising additions for such an inexpensive pair of earphones, with support for its Headphones app, plus support for the spatial audio of Sony 360 Reality Audio, if you have a service that uses it. In Australia, that’s possibly just Tidal, though given Tidal is included with some telco subscriptions, that might be a handy enough conclusion for some, as well. 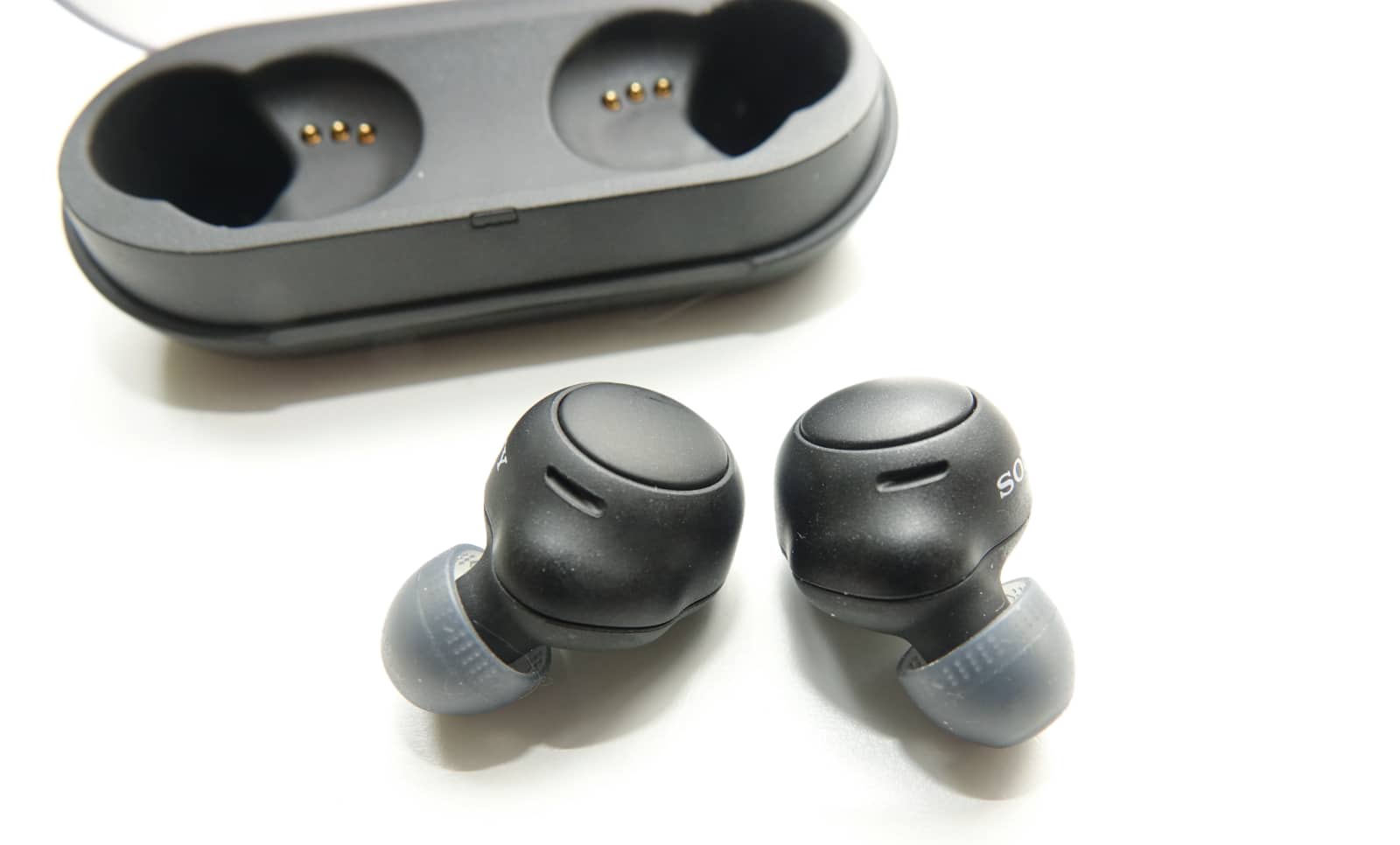 Wearing the C500, we were a touch surprised that the earphones were more comfortable than the top-end WF1000XM4, with Sony’s ergonomic fit doing nicely, even if the approach was one based on passive noise cancellation, not the active stuff we typically crave.

The silicone tips are just your regular stock standard variety — none of that cool foam-mix Sony uses on its flagship variation — but they’re easy to wear all the same, and somewhat easy to control, as well, with a handful of controls, or more specifically, a finger-ful.

Press the left button once you raise the volume or press and hold that left button to lower it, while the right button will give you pause and play control if you press it once, skipping to the next track or going back by pressing it twice or three times quickly in succession, respectively. and if you need to call up your phone’s assistant, simply hold on the right ear button, and it’ll do that.

That’s fairly simple, using a very plastic button that doesn’t always feel great or easy to click, but definitely does the job, and all without touch-sensitive controls. 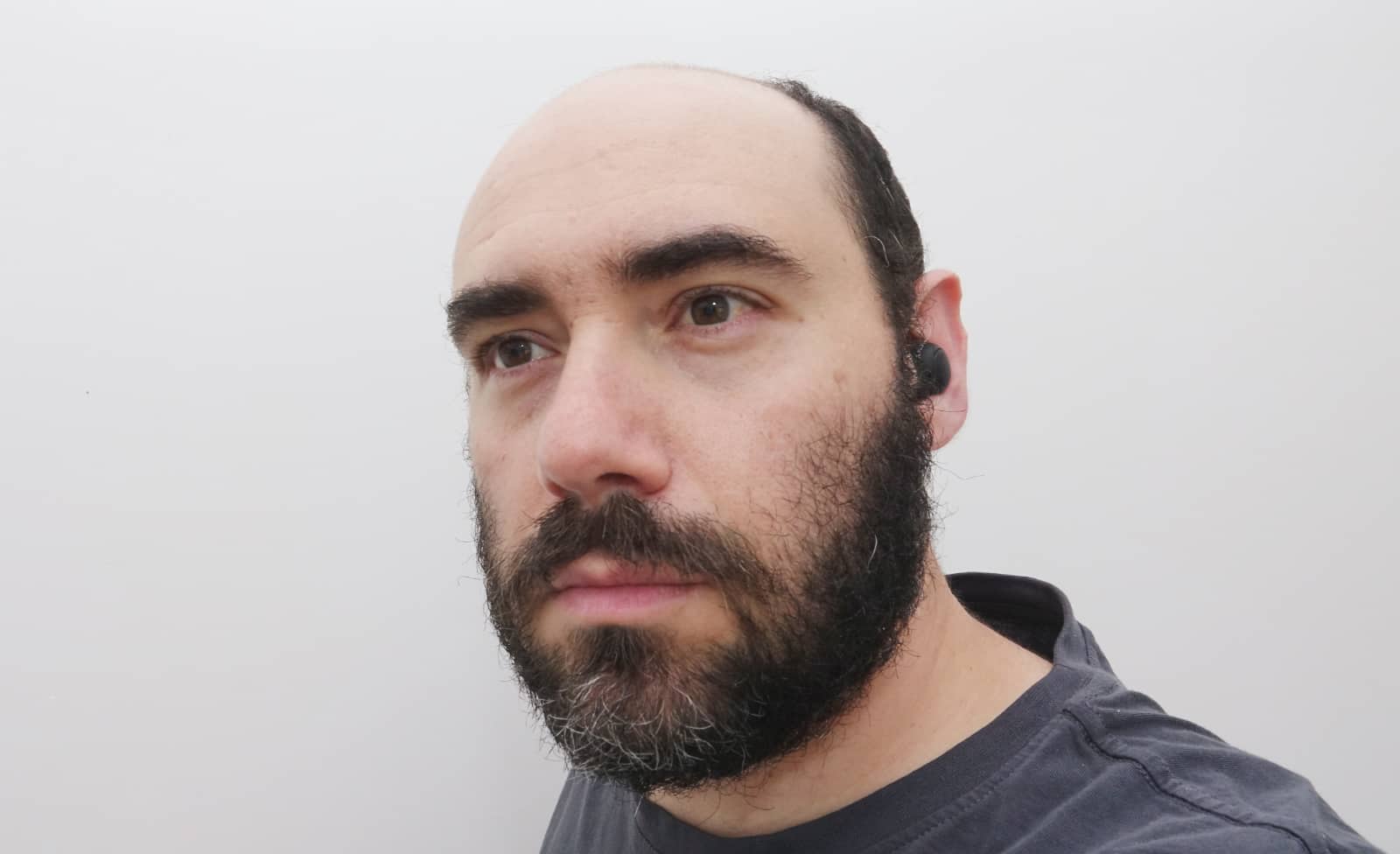 Performance is one area we typically expect strong things from Sony, and tested with the Pickr Sound Test, which you can listen to for yourself, we were relatively impressed with Sony’s take on basic wireless earphones.

That started with electronic from Tycho and Daft Punk, where you get a surprising hit of bass that doesn’t overpower, with strong balance overall. The notable bass drop in Tycho’s “Glider” is present, while the percussion in Daft Punk’s “Contact” rings with a decent sound few would be dissatisfied with.

The poppy sounds of Carly Rae Jepsen show us that the bass can sometimes lack being as pronounced as everything else, but the C500 still offer a nice sound overall, and when the bass is amped up — such as is the case in Ariana Grande’s “Into You”, Sony’s budget earphones can drive the message home quite well.

Overall, across rock and soul, we found the inexpensive earphones handled balance fairly well, but the soundstage could have been wider and more detailed.

For the most part, Sony’s approach to earphone design is delivering decent sound for the budget price with clear separation, adapting an otherwise solid sound for people not keen on spending up a fortune. But there’s very little in the way of personality here, and while Sony is known for warm earphones, such as is the case with its WF-1000XM3 and follow-up in the WF-1000XM4, the WF-C500 earphones aren’t cut from the same cloth. They sound good, but they’re also a little on the ordinary side, something we suspect is tied into its relatively inexpensive pricing.

Battery is also a little on the ordinary side, with a maximum of 10 hours possible from the earphones, with an extra 10 in the battery case. That’s not a remarkably impressive life, but it will do the job for folks not looking to spend much.

Granted, you’re probably not going to listen for ten hour stints, but if you decide to go for a long walk or even a decent run (given they have IPX4 water resistance), it’s nice to know the battery will last a few days of regular use.

The value makes for a better sticking point with the Sony C500, because they’re thoroughly inexpensive earphones, all things considered.

You’ll find a price of between $96 and $129 depending on where you look, with $129 being the recommended retail price Sony launched the C500 with, but upon review, Sony noting it was closer to $96.

If you can find these C500 earphones for under $100, the value argument is nailed, delivering strong sound and battery life for a price that is genuinely hard to argue with.

There’s no noise cancellation, something that isn’t a real surprise given the price, but there’s also no ambient mode, so no way to hear through the earphones, something you can find on near-priced competitors, such as the Jabra Elite 3. Neither noise cancellation or hear-through modes have to be reserved for the high-end, but in the $99 Sony C500, the company has clearly drawn a line in the sand and said “nup, spend a little more”. 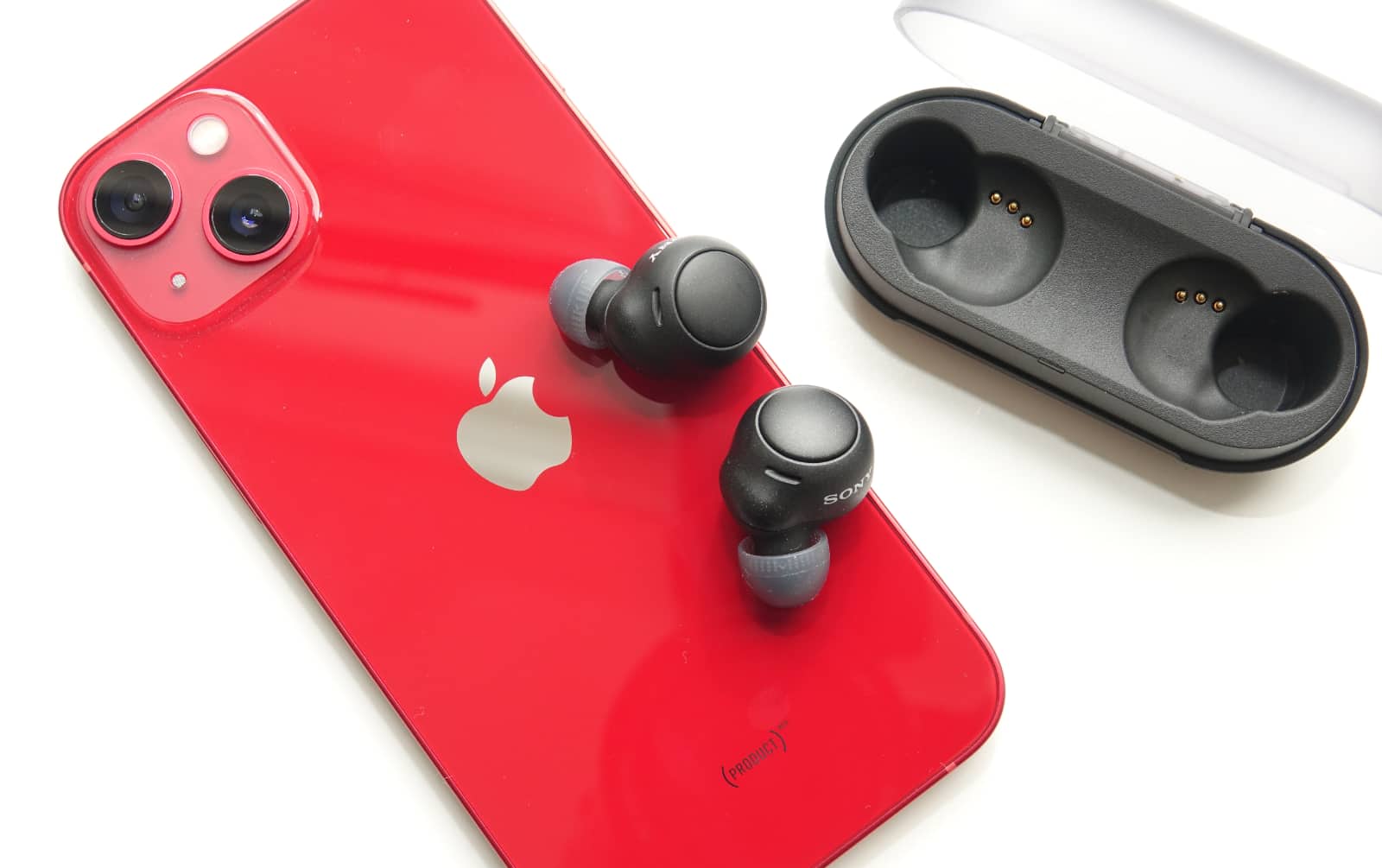 In short, they’re decent but featureless, making them ideal for folks looking for quality on a budget, and who don’t care about the extras. Frankly, we’d suggest shopping around given that those extras can make all the difference these days, but if you don’t care, there’s definitely something to look forward to in the Sony C500. 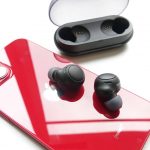