Your headphones can do 360 sound, but what about your speaker? The Sony RA3000 has surround in mind, even if it feels a little like a cool gimmick.

Sound may well be stereo, but with 360 sound a thing of the now, there are speakers to match. You mightn’t believe that sound can change, but you really just need to spend some time with the newly ordained category that is “spatial audio” to see what the big deal is.

It’s like the world of surround sound in movies, yet applied to music, with a musical sound that appears to occur all around you. Guitars on the walls, vocals in your face, it’s music you know not as you know it, and it’s been in headphones for some time.

But now Sony is bringing the idea to speakers, launching two models this year. Only one of these has arrived in Australia, with the Sony RA3000 offering a thick cylindrical speaker made for that 360 sound. Is it a great gadget or merely a good gimmick? 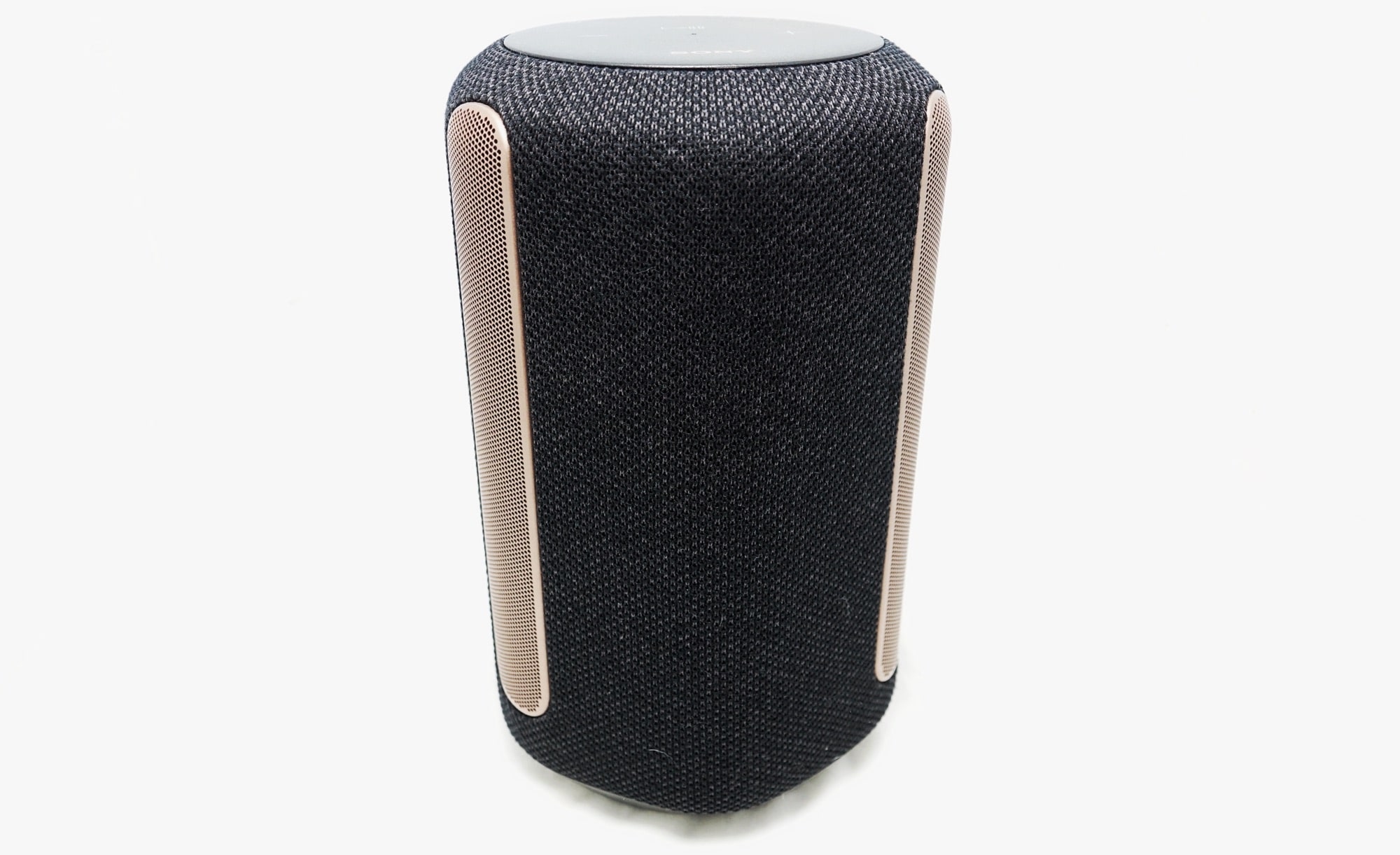 One of the larger and more unusual speakers we’ve checked out in the past year, the RA3000 stands nearly 25cm tall, and is basically an omni-directional cylindrical speaker if cylinder speakers were chunky.

While you might look at an older Amazon Echo or UE Boom as the at the standard approach for cylindrical can speakers, Sony has taken a wider approach, with this offering around 15cm of depth, making it just about the thickest can of sound around. It’s kind of like a taller take on Amazon’s Echo Studio, truth be told.

There’s a big grill covering the whole thing, with two bronze sections on the front for the two passive radiators found stretched along top to bottom in small sections, with two teeters and one full frame 80mm speaker inside. That’s more than the typical one or two speakers you might expect inside, and the Sony RA3000 is designed to work over Bluetooth, Chromecast, and WiFi, connecting to your home network easily. 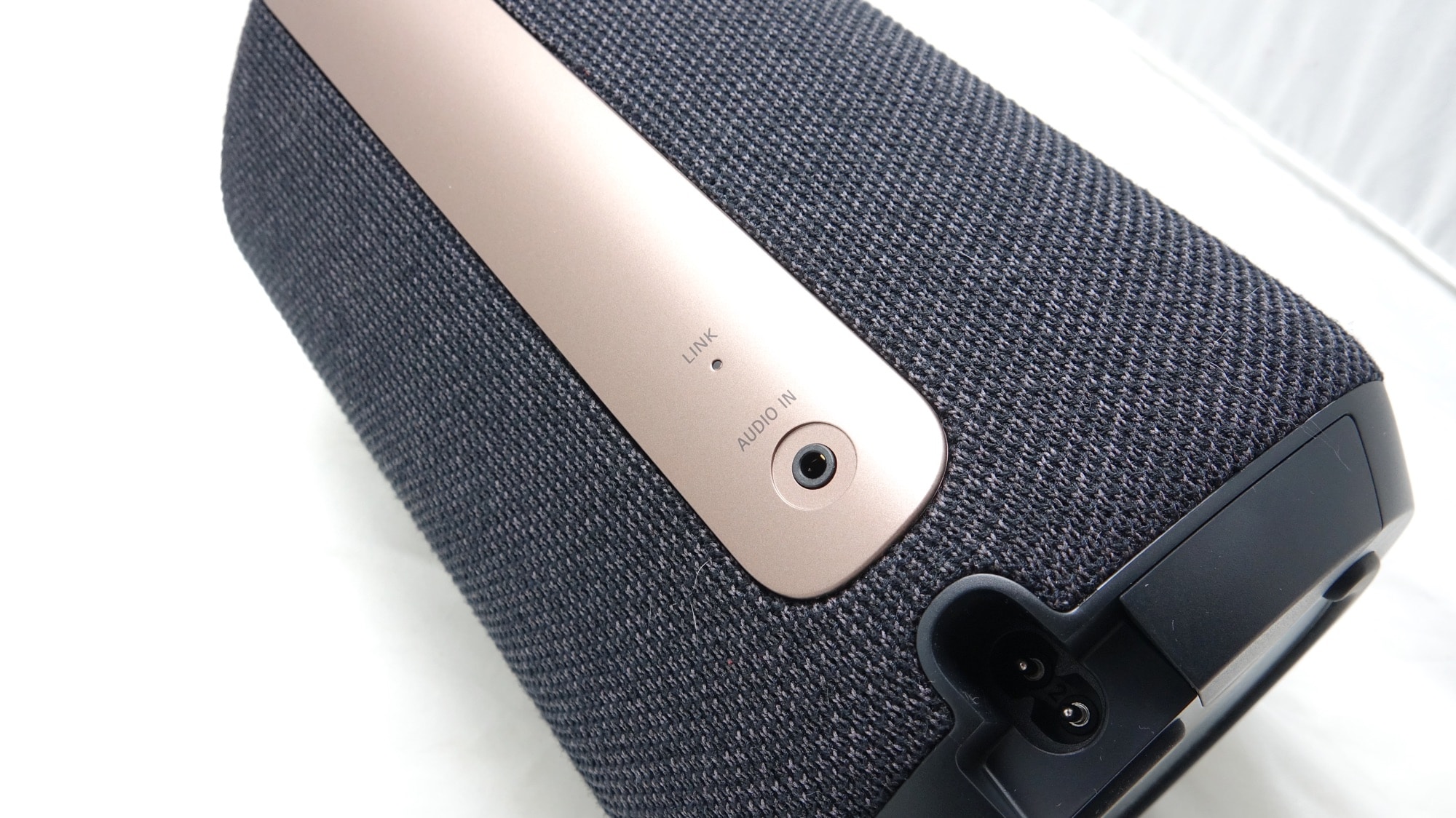 Using the RA3000 is a little different than we’ve come to expect, because you’re either going to handle it over Bluetooth or WiFi, typically. Bluetooth supports standard stereo sound, but not 360 degree sound, while WiFi is required for 360 sound, the main reason you might be considering this speaker.

There’s a top panel of buttons for changing sources, and if WiFi and Bluetooth don’t work for you, there’s always a 3.5mm jack on the back, but if you’re looking for 360 surround, it’s basically WiFi or nothing.

For that, you’ll need to control the Sony RA3000 through a supported app, Tidal working for that purpose, one of the few apps that supports spatial sound built to work with Sony’s speakers. You’ll find it under Sony 360 Reality Audio, which also works with Sony headphones, and allows you to hear music in that new spatial way. Spotify will talk to the Sony speaker, mind you, thanks to support for Spotify Connect, but that’s only in stereo, as Spotify misses out on the 360 degree love.

A little bit different from the standard speaker review, Sony’s RA3000 is built for both regular flat 2D audio, plus that newfangled 3D audio, whereby the sound is engineered to appear as if it’s happening all around you.

As such, as we had to build a slightly different sound test from the regular Pickr Sound Test, working with Tidal for some of the 360 sound we’re hoping to hear.

In standard audio, Sony delivers some pretty strong balance, and you can really make this speaker sing. It’s big and bulky, but Sony is working those drivers quite well here, delivering decent balance.

However 360 is what we came to try, so that’s where we want to get stuck in. Fresh from the high of seeing Apple launch a spatial music service, we’re keen to see how it works with a speaker specifically built for it, and that’s kind of what we get, showing the idea works well with some tracks.

Testing it with specifically 360 degree audio from Tidal, Laura Nyro delivers a beautifully sparse sound in “Poverty Train” that makes it seem as if she’s right in front of you while the instrumentation is around you.

It’s a similar feeling in jazz, with Miles Davis’ “Freddie Freeloader” creating a rendition that is a little more spatially aware and deep than a standard speaker might accomplish.

The more you listen to in 360, the more you see some tracks stand out. Doja Cat’s “Say So” pumps the dynamics between highs and lows, and greets you with an impact that makes your room come alive, while Sly & The Family Stone’s “Everyday People” may be one of the nicest renditions of this classic track we’ve heard.

But they’re just a sampling of what’s out there, with 360 sound limited, and that’s before you get to the problem that the dimensionality offered by the RA3000 can be a little hit and miss.

While the sound is solid testing with Doja Cat and Sly & The Family Stone, our Ben Folds test track of the 360 version of “Landed” came out shallow. Ben felt like he was off in the distance, along with the piano, and if this was 360 surround, we were clearly going deaf in one ear.

It was the same with The Glitch Mob “Animus Vox”, which offers a 360 version on Tidal, but comes off feeling flat as if the deep bass was held behind a wall. That’s a dramatic difference from the vibrant delivery we get with headphones, and indeed from the electronic sounds of Clean Bandit’s “Symphony” and Due Lipa’s punchy “Blow Your Mind”.

And it’s not just an electronic issue.

Bring Me The Horizon’s “Parasite Eve” was punchy and immersive with the speaker in the same position, offering grunt and guts in 360, yet Incubus’ “Sick Sad Little World” fell flat, against stuck behind the invisible wall that not only softens the blow, but dulls any edge Sony’s RA3000 could offer.

The good news is that Sony’s speaker is loud, with plenty on the dial to get those decibels up. However that doesn’t solve the softness that flattens some of the sound out there.

What’s bizarre about this is that we’ve tested these tracks with Sony’s 360-capable headphones, running them on the Sony WH-1000XM4 headphones and WF-1000XM4 earphones, and they all sound so much better in these personal audio spaces. They are still a little quieter than a standard track, but they’re so much more involved, and don’t see their blow dulled. 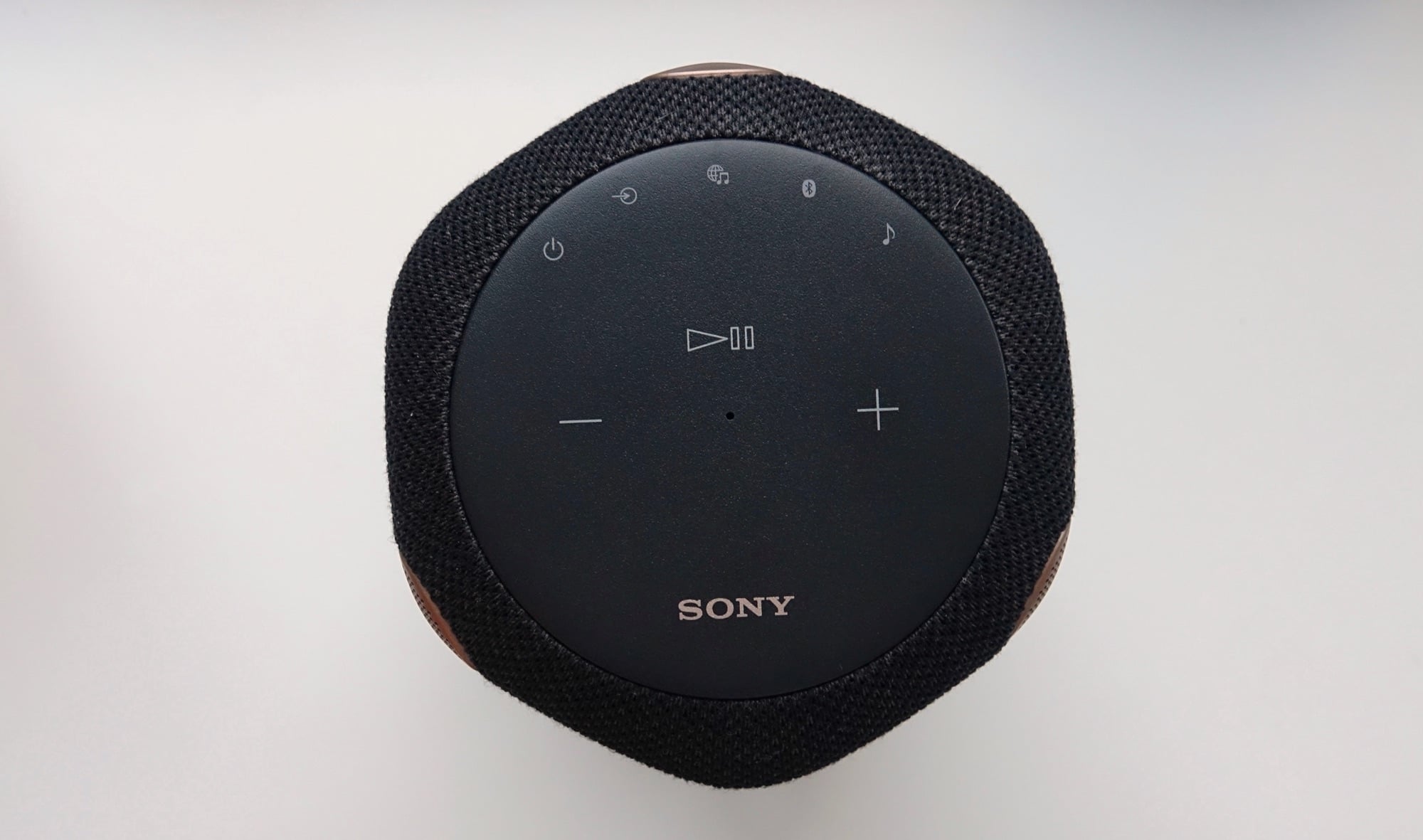 Part of the problem also comes from compatibility, because even though we’re now living in a world where 360 degree music is a thing, the Sony RA-3000 only allows you to get it from a handful of sources.

We got it working through the Sony 360 Reality Audio portion of Tidal, sending it wirelessly using the internal network, but Apple Music on both Android and iOS refused to let the recent arrival of Dolby Atmos Spatial Audio touch the speaker. That might be because Dolby Atmos isn’t on Android’s Apple Music yet, but the iPhone can’t play nicely with the RA3000 either, because there’s no support for sending audio to a Chromecast speaker from the iPhone.

It means you’re a little limited for choices in 360 sound, so you better hope you have a Tidal account right now.

If you don’t, you’ll get standard sound sent the way of the Sony, and it’s not bad, but perhaps not worthy of the price tag Sony sets.

At $450 in Australia, we find the price is a little high for what amounts to a bit of gimmick.

By itself, the Sony RA3000 speaker is a good speaker delivering a lot of sound, but it feels as though it would maybe be the sort of speaker you’d pay $300 for. There’s no battery here and the whole thing has to be wired, so this is a speaker that’s going to stay on your desk or shelf at all times.

The raison d’être is supposed to be the 360 sound, but with that hit and miss delivery, not to mention how hard it is to find tracks you might want to play on service you actually use, 360 sound can feel like a bit of a waste.

You’ll want to come for the support of spatial sound, but that’s not the reason you’ll probably stay.

Mind you, we wish Sony had the idea of supporting AirPlay 2 with the Sony RA3000, because it’s the one connection format missing in action.

Yes, you get Bluetooth, and yes you get Chromecast, but if you have an iPhone or iPad and you’re eager to share, AirPlay would have been the way for device owners of the Apple persuasion to connect and share their music easily.

That is sadly missing in action here, and means that if you have the urge to send spatial audio to the Sony RA3000 by way of an iPhone, it won’t happen through Apple Music, even if it can work through an Apple TV to a supported soundbar.
It’s really something Sony should have considered, alongside maybe some emulation. We’re never sure quite how successful emulated sound is going to be, but the Sony RA3000 supports Sony’s Digital Sound Enhancement Engine — DSEE — and so if there was an element of stereo to 360 upscaling you could switch on, it might have improved the sense of 360 playback you’re looking for. 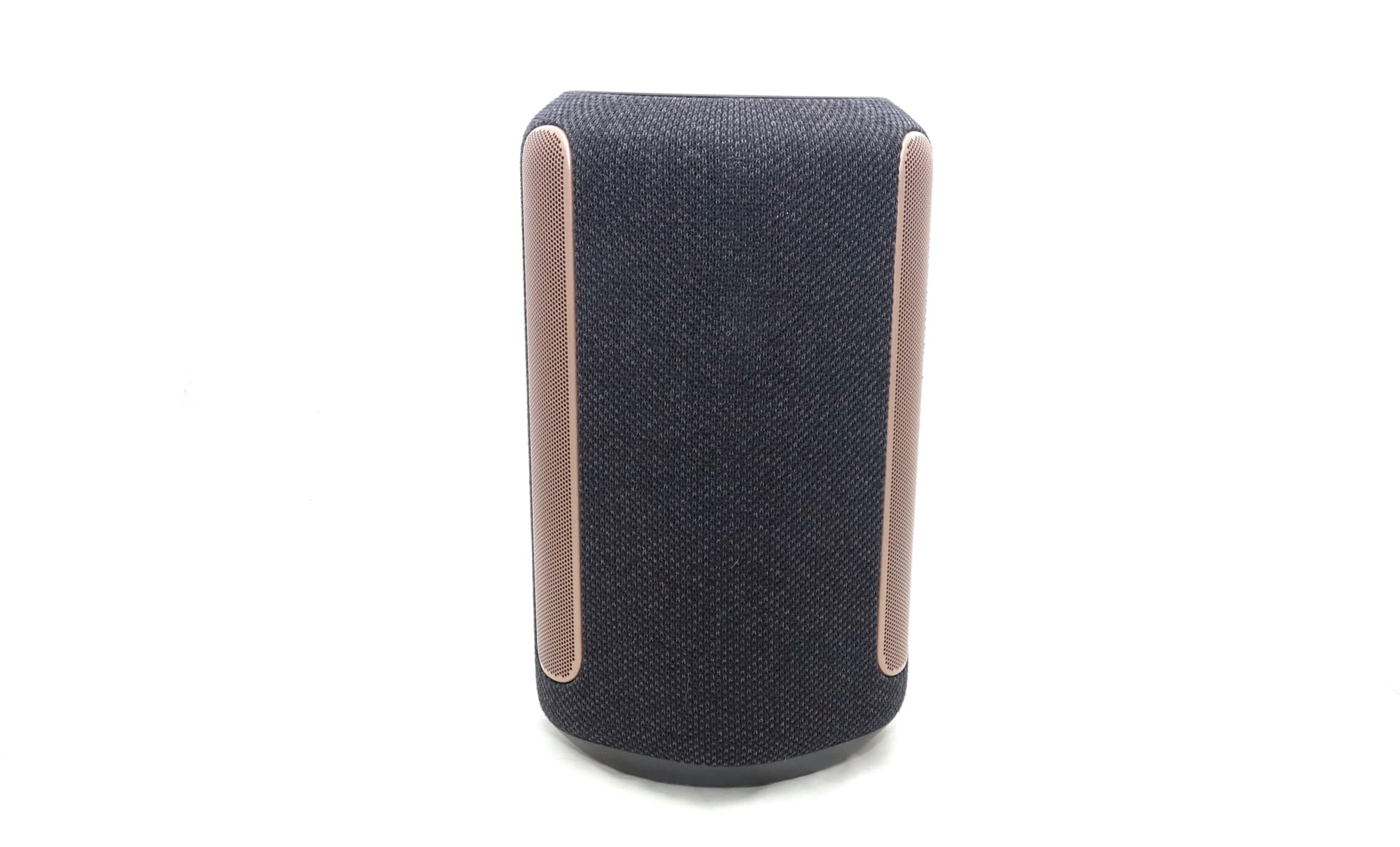 We’ll admit that we’re a bit conflicted on this one, because while we love the idea, it doesn’t pan out quite the way we had hoped.

Sony’s speaker is loud and clearly capable, but the 360 sound is a hit and miss affair. The idea can work, but it doesn’t seem quite as solid a reality as what you can achieve on the headphones, and even misses out on the compatibility afforded by other the other spatial service on the market.

It’s a start, and one that’s welcome. Frankly, though, we think Sony could nail it on the second or third go, when it eventually drives more compatibility and makes it possible for more music to sound spatial, rather than the handful of tracks you can find today. 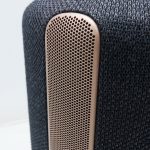 Sony RA3000 360 Reality Audio wireless speaker
Design
Features
Performance
Ease of use
Value
The good
Sound quality is quite good
Fairly loud
The not-so-good
Dimensionality can be hit and miss
So few sources support 360 Reality Audio
No upscaling from stereo to 360
No support for AirPlay
3.7