Need a pair of easy and colourful headphones for your kids? The JBL JR310BT might just be them, and they come without cords.

JBL has been experimenting with this category, though, bringing along its heritage and understanding for sound in the process, with this year’s JR310BT model popping up. Arriving with bright colours, a compact design, and no cords whatsoever, as well as a bunch of stickers to decorate them, they’re a play on headphones made for little ones who want to be unencumbered by cords and cables, just like mum and dad. You’ve probably moved on to cordless in some way, and they can have it, too.

And priced from $70, they’re also not terribly expensive, so what’s the catch? Does JBL deliver a value with the JR310BT, or is it another case as cheap for the sake of cheap? 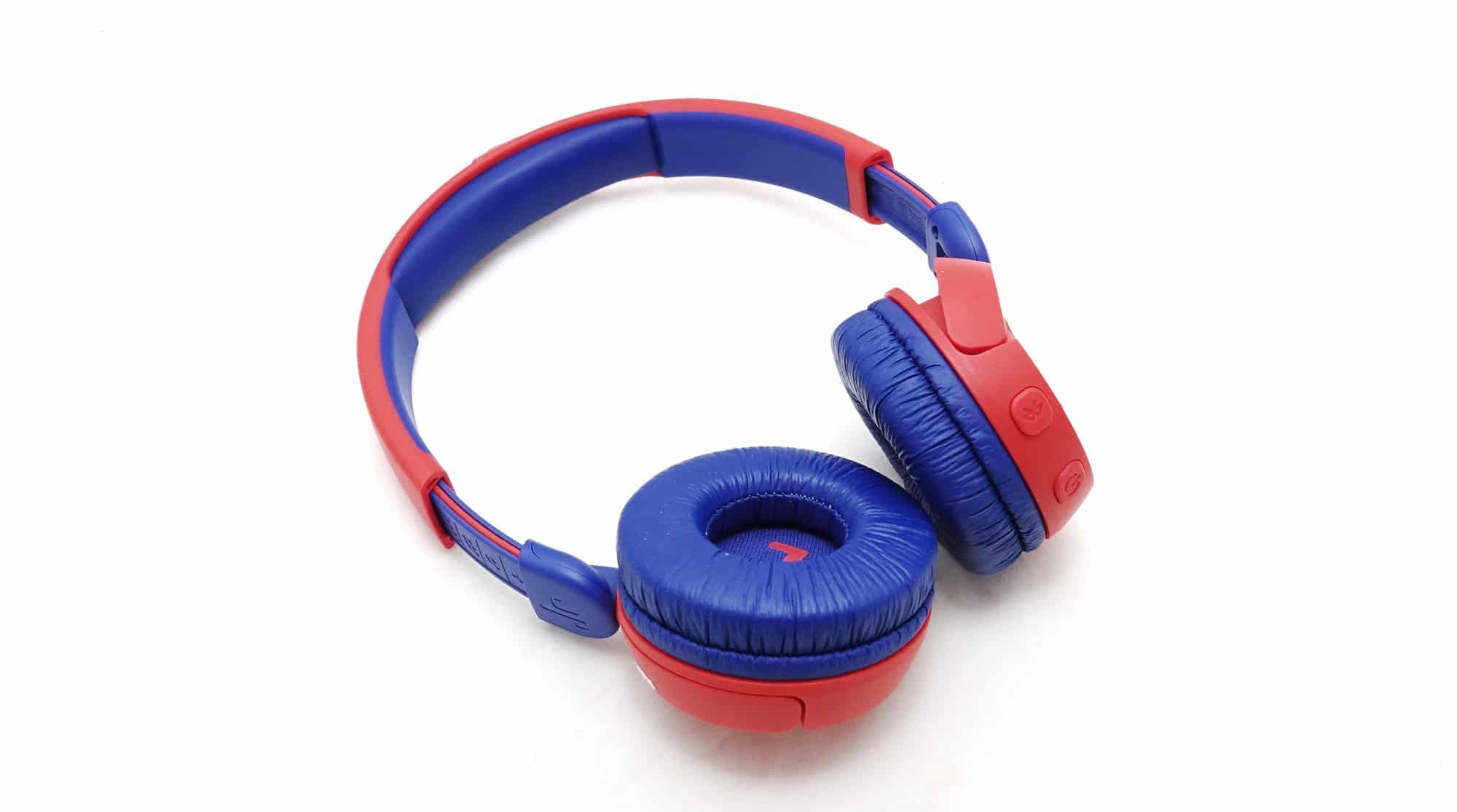 Looking like a pair of headphones that walked out of a Technicolor dreamcoat, or dreamboat, or any form of apparel or transportation, the JBL JR310BT might just be among the most colourful of headphones we’ve seen in recent years. Short of a pair of bright green Razer headphones, maybe.

Our pair was red and blue, but there’s another that’s pink and light blue, and whatever you choose, they come with stickers, which this reviewer’s daughter used to make the headphones into something fun and personal. No one has headphones like this once the stickers are attached.

Underneath, there’s a 32mm driver encased in plastic in these on-ear headphones, as well as a battery charged by USB Type C good for a max of 30 hours, and there’s a volume limited piece of hardware that maxes out at 85 decibels (85dB).

And they’re relatively lightweight, too, weighing 115 grams and able to be folded up for easy portability. 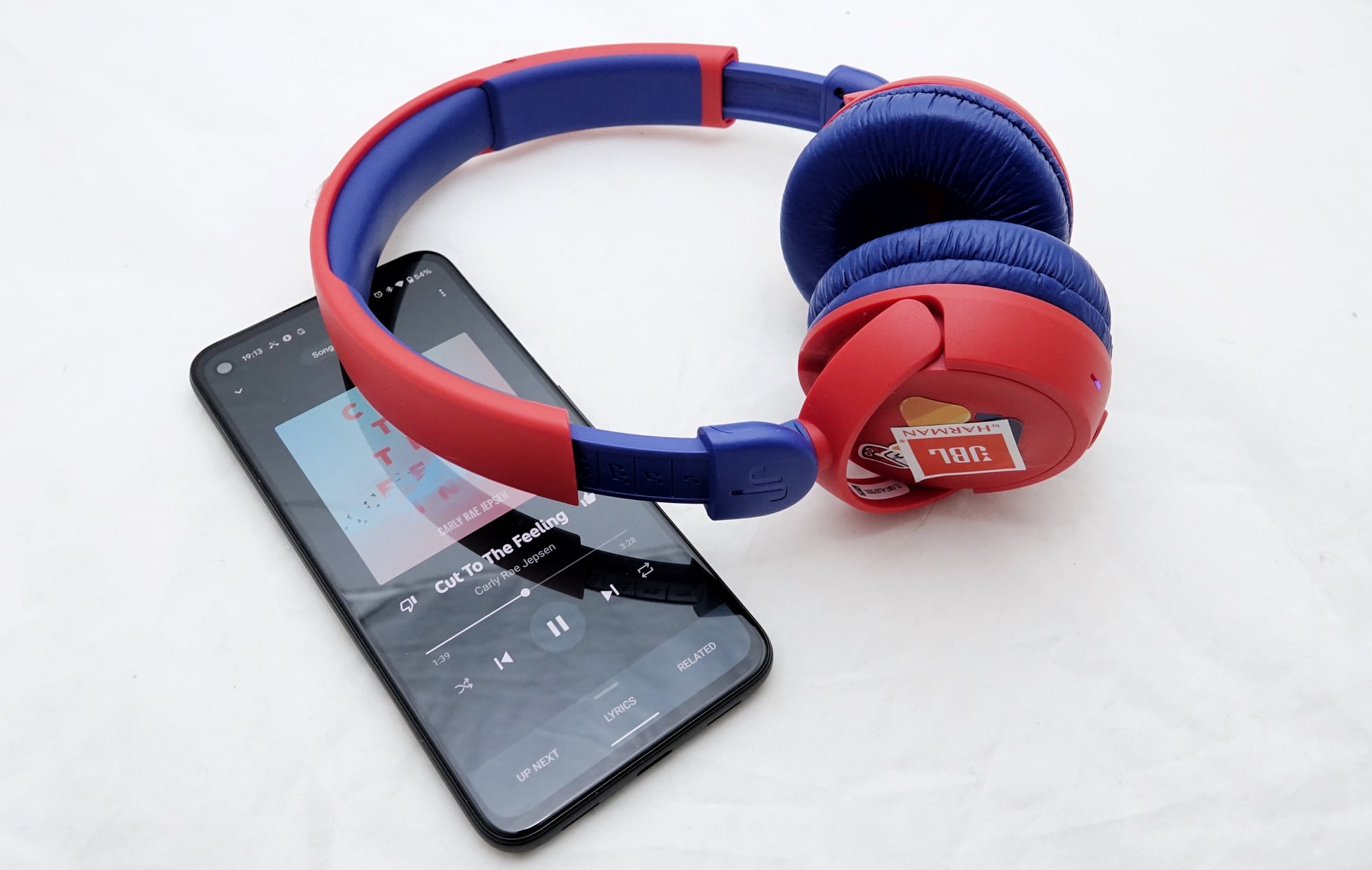 While they’re small, light, and colourful, using the JR310BT is a little different from another pair of wireless headphones, partly because JBL has removed all of the controls you might expect. There’s a power button and a Bluetooth pairing button, no support for cables, and that’s it. And that may actually be a good thing.

No cables makes the headphones remarkably easy to use, and no extraneous buttons is actually kind of a win for kids and parents alike, as well.

Remember that these earphones are made for kids, and so giving them a volume controller might actually be a bad idea, so that’s gone. Rather, you need to control the volume specifically from the device, imparting some of that control back to you, the parent. 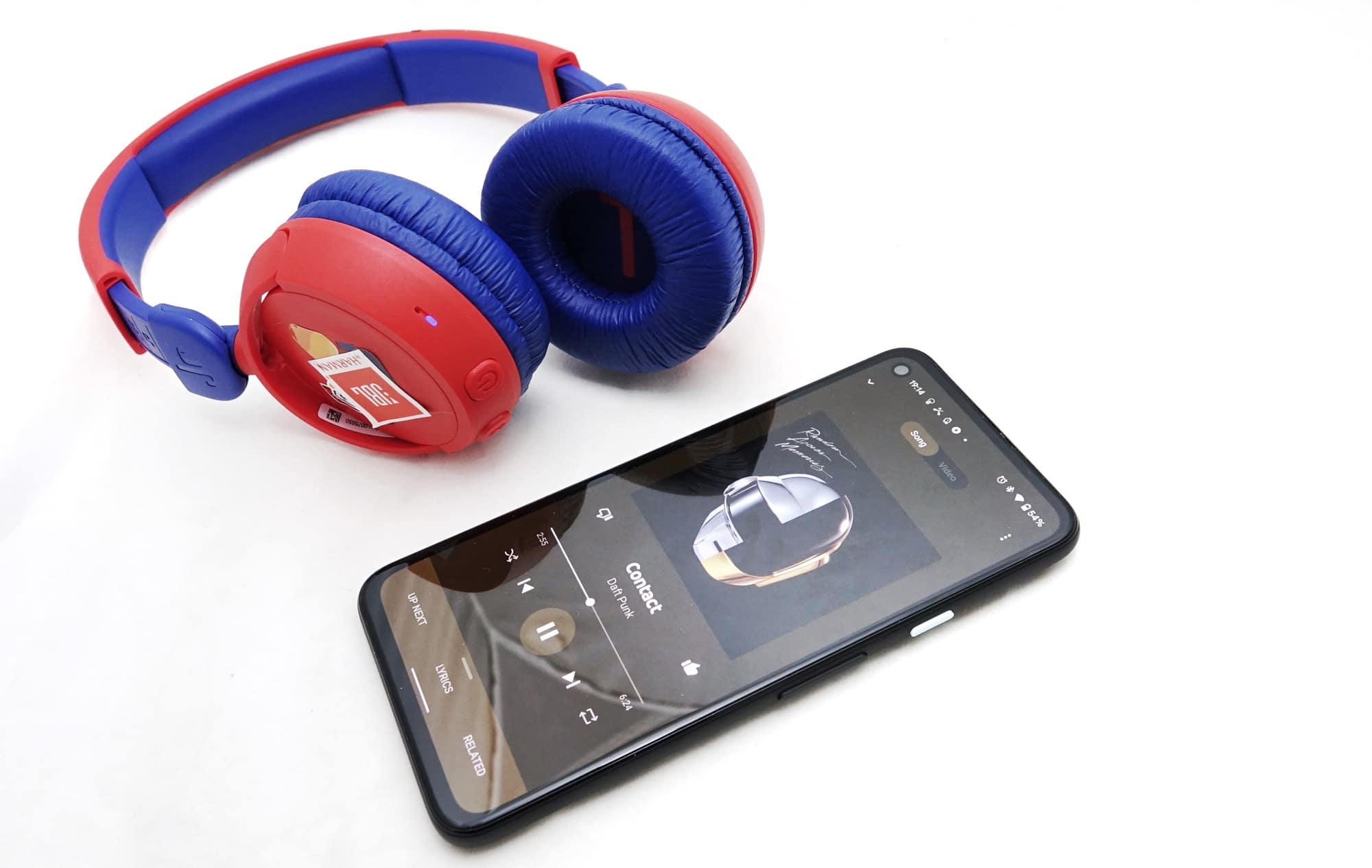 Of course, if they don’t sound very good, your kids probably won’t care, and will chuck them to the heap, wasting your money in the process. That’s why we’re throwing them through our sound test.

As always, we’re testing our headphones with the Pickr Sound Test, which you can hear for yourself, even though we doubt most kids these headphones are aimed at will remotely listen to our list. They’ll have their own songs, and that’s cool, but we have our review methodology all the same.

And that starts with electronic, with Tycho’s “Glider” delivering a relatively balanced sound — decent mids and highs, and maybe a touch too much bass — but without a lot of sound stage. That’s probably fine given the younger audience, but the bass isn’t detailed, just powerful, something you get the feeling of in Daft Punk’s “Contact”, too.

Over to pop, and the balance continues with an easy listening sound. Carly Rae Jepsen’s pop punch is surprisingly well balanced, while Ariana Brande and Mark Ronson shows the bass doesn’t need to drive too hard over everything else, with a comfortable sound overall.

If your child is more into rock, we found crisp and punchy bass in Muse and Rage Against The Machine, handy for kids who are truly metal, while jazz also resonates clearly, offering a comfortable sound through our test tracks there.

In short, the JBL JR310BT headphones deliver a surprising amount of balance, surprising not just because that’s unusual for inexpensive headphones, but something we’ve not experienced in headphones for kids. 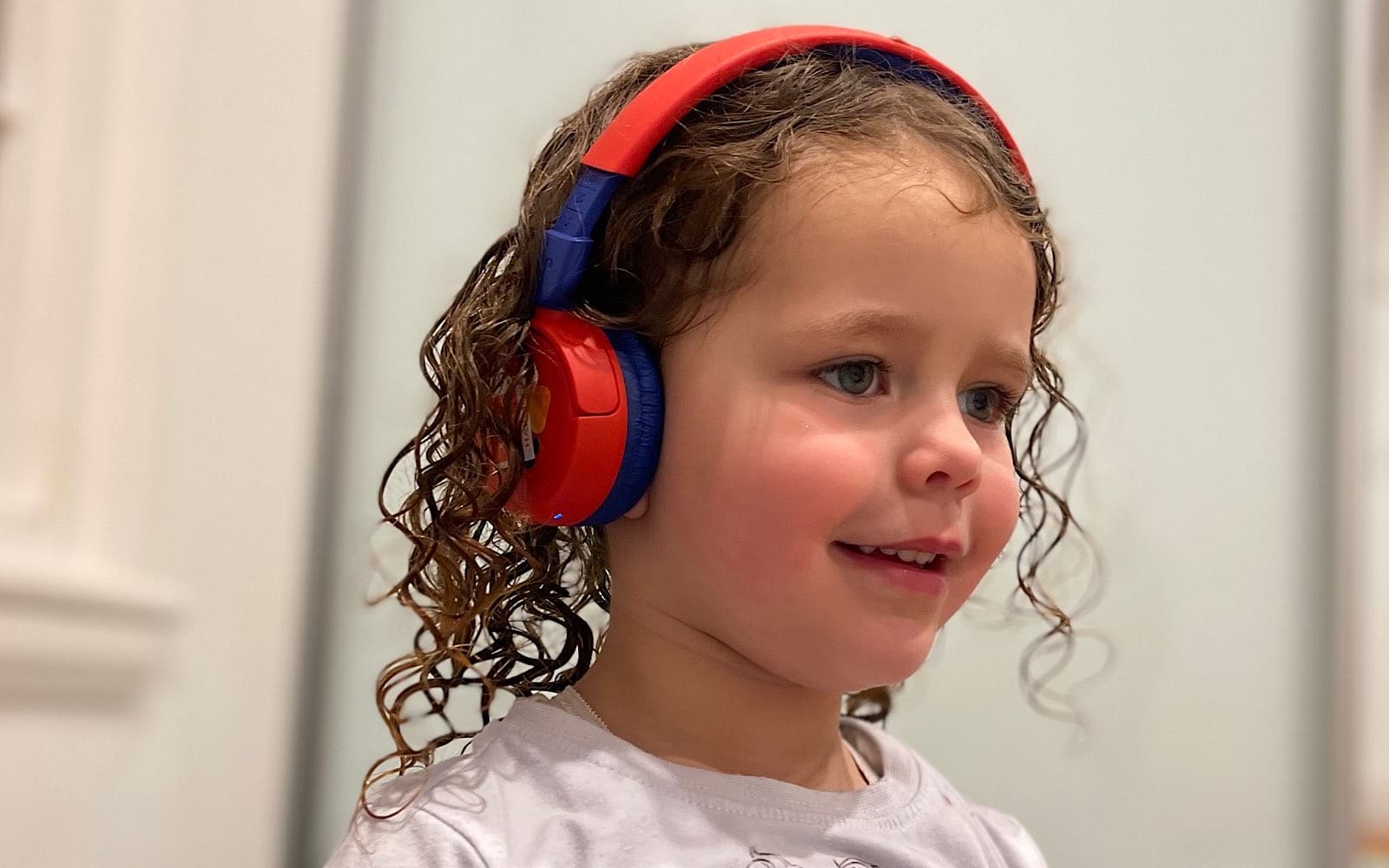 With surprisingly solid sound, the volume is a topic worth exploring, because these aren’t your typical modern day earphones with solid volume. They’re not bad, but the JBL JR310BT are volume limited, intentionally so.

Kids don’t really know the maximum volume should be without negatively impacting their hearing, and let’s be honest, some adults struggle with that, too. But kids moreso, because they don’t know that loud volumes can hurt your hearing. So to deal with that and prevent too much impact, JBL has a volume limiter on the JR310BT, maxing out at 85dB.

Limiting the volume makes the JBL JR310BT “kid-safe” headphones, safe because your kids can’t jam the volume up super loudly to the point where their ears are totally under threat.

We think there might be a little too much clearance, and these were plenty loud at around 80 to 90 percent volume, so that extra 10 percent might just push things too much. But with the lack of physical volume controls on the headphones, you can always set up the volume for your kids before a trip, listen yourself, and hope they don’t know where the volume control is on the phone or tablet they’re watching on.

In our time reviewing the JBL JR310BT, we found the volume needed to be pushed to round 65 to 75 percent to be as comfortable as we normally like, but even around there it was comfortably loud and delivered surprisingly strong sound for a pair of $70 headphones. 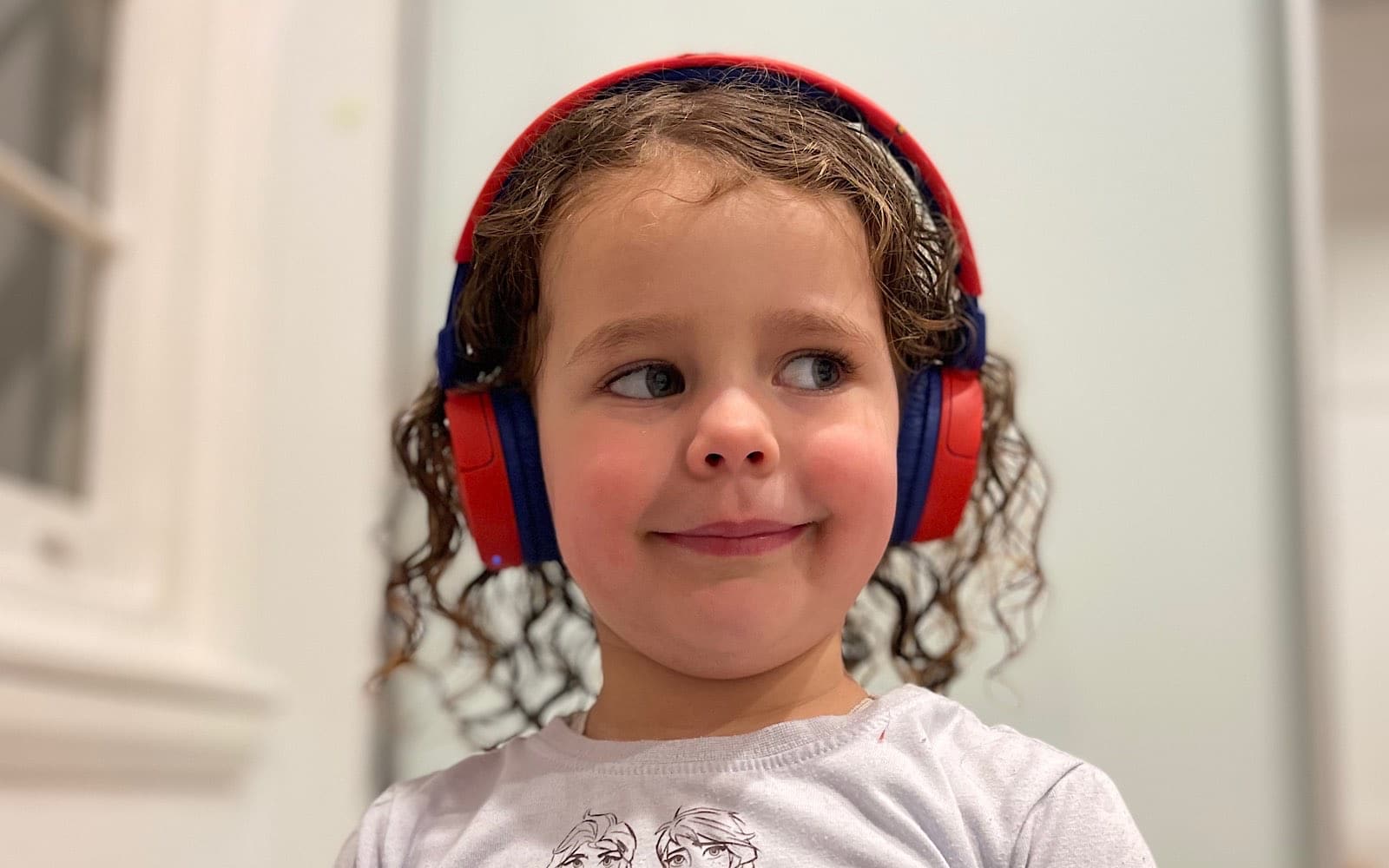 Also capable was the battery, which offers a pretty impressive maximum wireless runtime of around 30 hours overall.

That’s a couple of days worth of a road trip or a long flight somewhere back when life returns to normal, whichever happens first, and that’s not a bad result.

Granted, there’s no 3.5mm cable for when the battery does die, so just make sure to charge the JR310BT up before any trip, and you should be fine. Good thing it takes a USB Type C connector, though, which makes it like almost any phone not made by Apple, and almost any new laptop, too.

The price is also quite solid, and helps to complete the package. Frankly at $70, the JBL JR310BT feel like an absolute steal.

Sure, there’s no noise cancellation or wireless charging, but if you don’t care about features like that, and just want a pair of headphones free from cords to keep the kids busy, these are definitely it, and priced in a way that makes total sense. 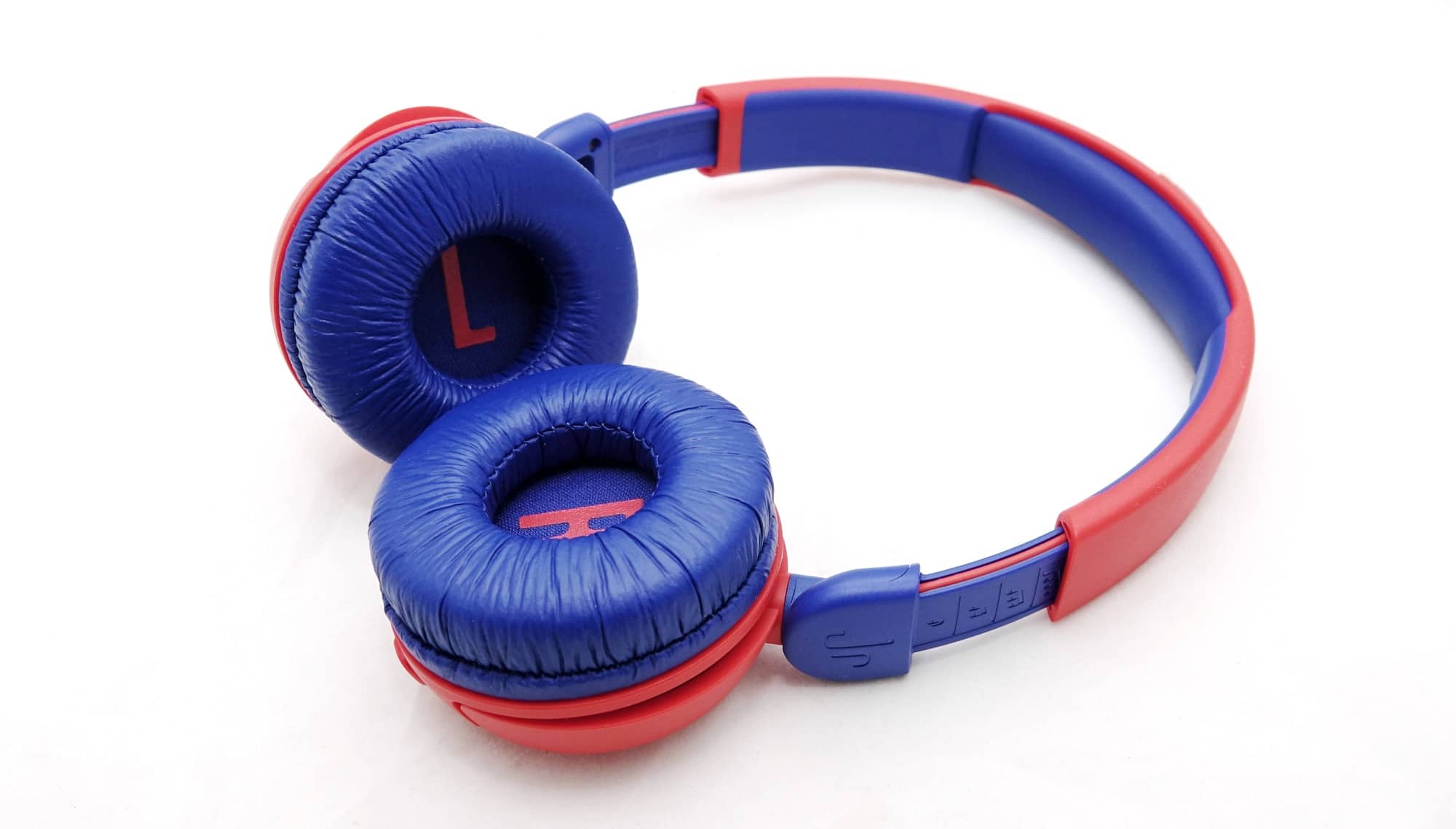 As to what they need, for the price the answer is not much.

We’d love a spot of active noise cancellation, but for under $100, that’s probably not going to happen just yet, and would affect that long battery life if it did. The lack of controls is a minor concern, but as we said, it’s minor, and kind of intentional.

About the only two things we really long for are a headphone jack and a carrying case, neither of which arrive with the JBL JR310BT. 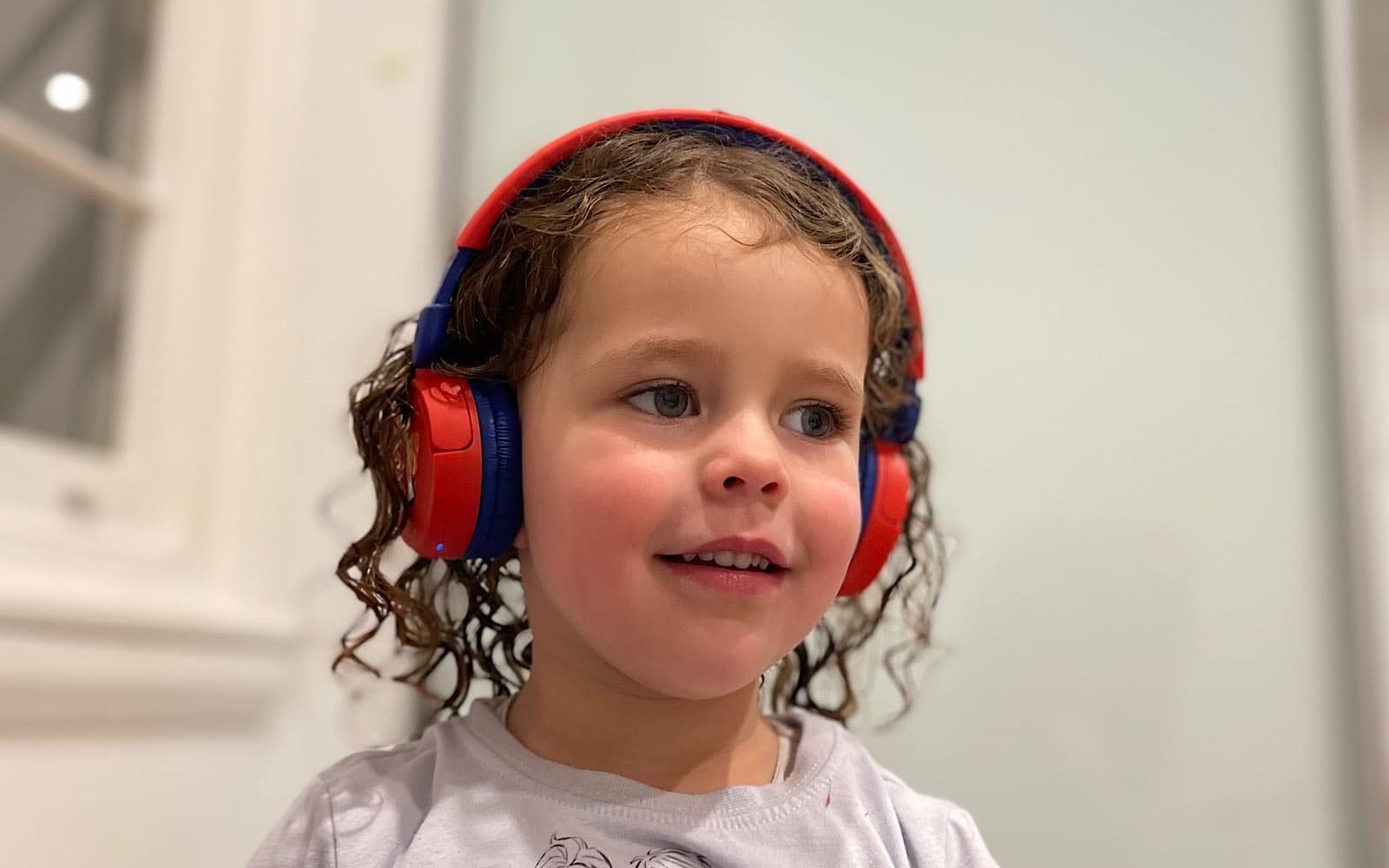 Despite those omissions, what we loved about these headphones was the sound quality for the price.

Simply put, the JBL JR310BT are a bargain for what you get, offering great sound in a kid friendly design free of cords.

These are like a child-friendly alternative to Beats that your wallet won’t hate you for. And the fact that they come with stickers is such a cute inclusion.

At $70, it’s hard to argue with the JBL JR310BT. Cordless and curious, they’re a budget pair of headphones that don’t really scream budget. In fact, while they lack noise cancellation, they’re a little reminiscent of the JBL Tune 600 BTNC we reviewed a couple of years ago, not just in sound quality, but even in design. Granted, those were black and lacked the colourful design, but the look is very similar.

If we had to guess, JBL’s JR310BT is modelled on those surprisingly strong earphones, but without the noise cancellation. At half the price and focused on kids, it’s easy to see the attraction.

Ultimately, if you need a pair of headphones your kids can call their own, the JBL JR310BT are an easy recommendation. And hey, with their own wireless headphones, they’ll hopefully never need to wear yours again. Recommended. 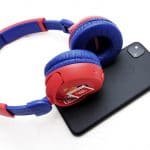