Taking a party to go often means carrying around a sizeable speaker, but the BlueAnt X4 packs in volume in a compact style.

Nearly every manufacturer makes a wireless speaker, and the assortment of options means you can spend very little to a whole lot, but most offer the same style of speaker: something small in bright colours made to get a big burst of sound in the most portable way.

Bluetooth speakers can be great at practically anywhere, parties included, but if you fancy a speaker purposely made for a party, you’re probably looking for something with a touch more pizzaz. It might include flashing lights, lots of volume, and maybe even a microphone so you can sing or shout out to friends. If you’re really lucky, it’ll even come with a price that won’t burden your wallet and let you save some money for that party you’re planning.

At $299, that could well describe the BlueAnt X4, a smaller edition of its X5 sibling. With a good $100 difference in the cost, is the X4 capable of delivering better value, or would the bigger model make more sense for most? 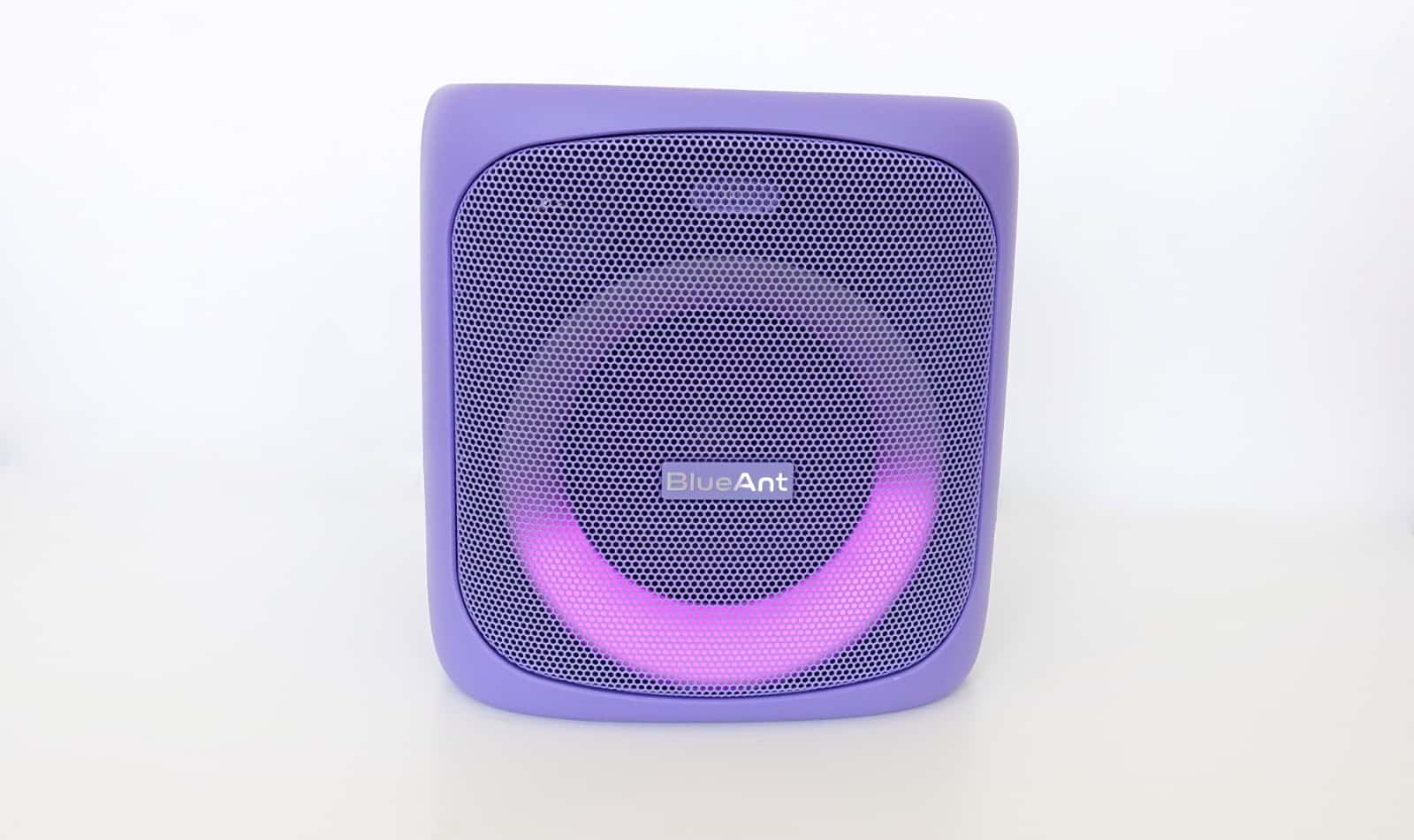 Appearing as the family member to the X5 model BlueAnt released last year, the X4 is a smaller take on much the same, but now in smashing colours. Our BlueAnt X4 review unit was a delightful purple, something the reviewer’s daughter would easily be into, and the one microphone it arrives with was purple to match.

It seems there’s a little more in the way of colour options compared to the X5, which came only in black. In the X4, you get a choice of black, white, turquoise, pink, and purple.

The concept is still largely the same despite the colour difference, with a large party-style speaker featuring flashing LEDs packaged into a smaller design, a little like if Sony’s Muteki range had somehow been made to go.

Inside, there’s a 13cm woofer and a 5cm tweeter, with enough sound for a maximum of 50 watts, producing quite a bit of volume and taking its sound through Bluetooth 5, so you’ll want to grab that phone. 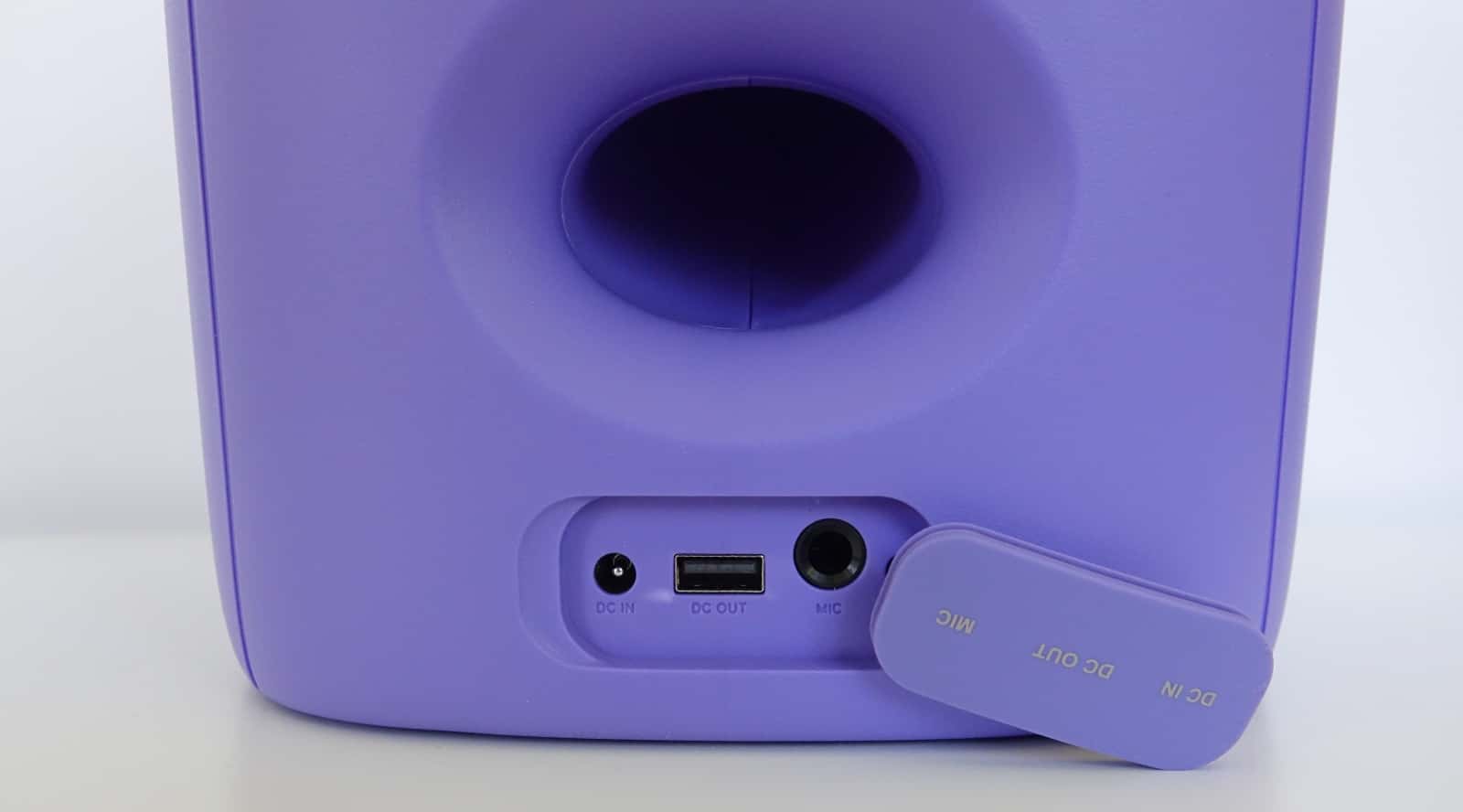 Regardless of what you connect with, the BlueAnt X5 includes controls up top, with an obviously large volume knob, and there’s also a spot on the back to let you plug in that one microphone included in the box, allowing you to sing your heart out with what you play. That’s distinct from the two mics in the X5, though given the size different, also not a surprise.

A battery is featured in the unit, rechargeable through a power plug, but it can be used not just to take the X4 to go, but also to recharge your phone through the included Type A USB power port.

There’s also something else going on here, as the BlueAnt X4 is able to talk to more speakers, supporting up to 100 other X4s, provided you happen to have those laying around. 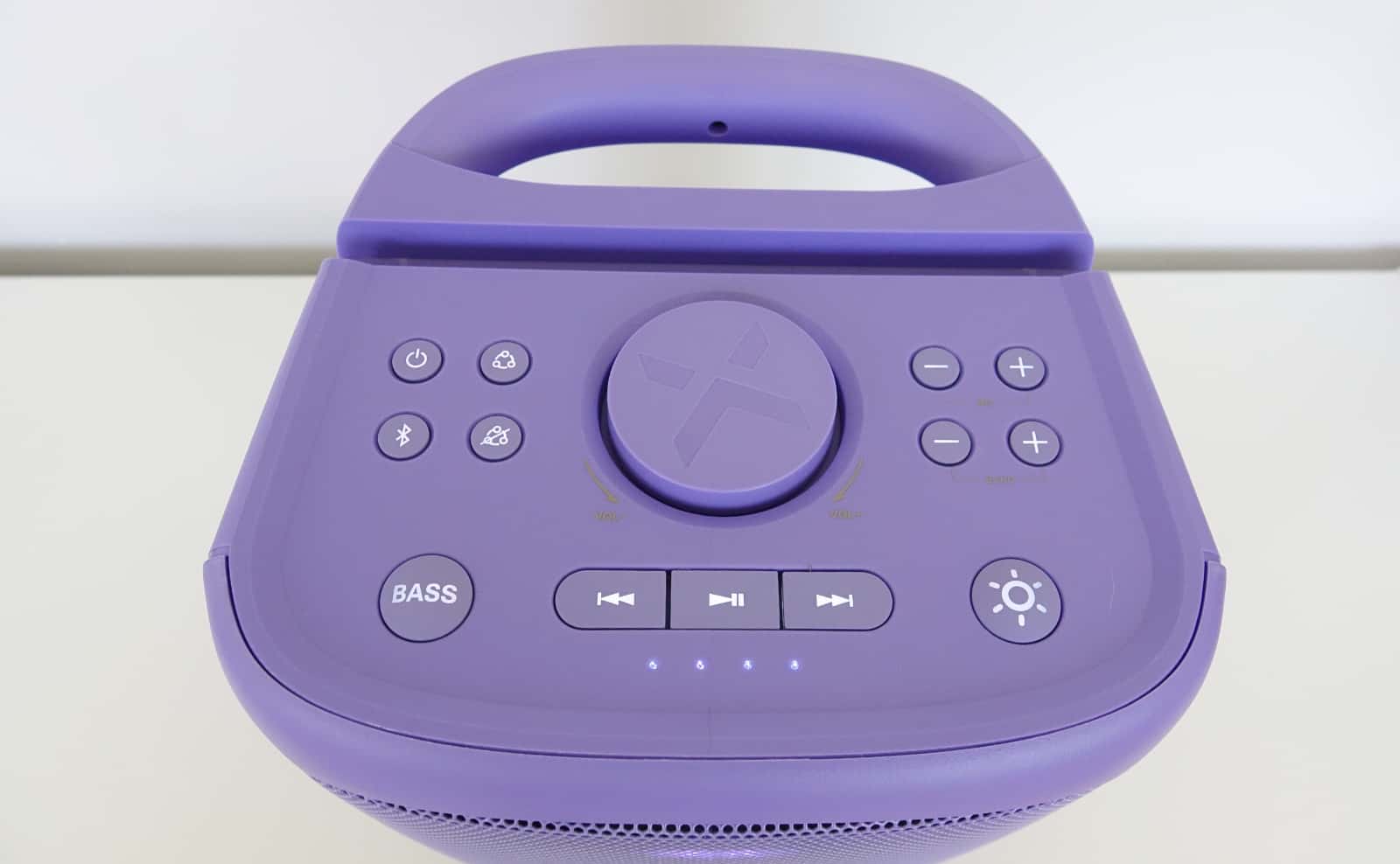 Like it was in the X5, using the BlueAnt X4 is relatively easy, thanks in part to the weight and those controls.

With an obvious carrying handle and a fairly friendly and well distributed 2.6 kilogram weight, the X4 is easy to pick up and carry, and the controls make it fairly simply to use, too.

The volume knob is a cinch, and most of the buttons will make sense, too, with power, Bluetooth pairing, bass boost, light show changing, playback controls, and settings for microphone volume and echo control, making this into a small PA of sorts, but mostly to sing your heart out, or anyone else in control of the mic, for that matter.

You’ll also find four LED dots at the top telling you just how much battery life you have left, and when you’ll need to reach for the regular plug back at home. 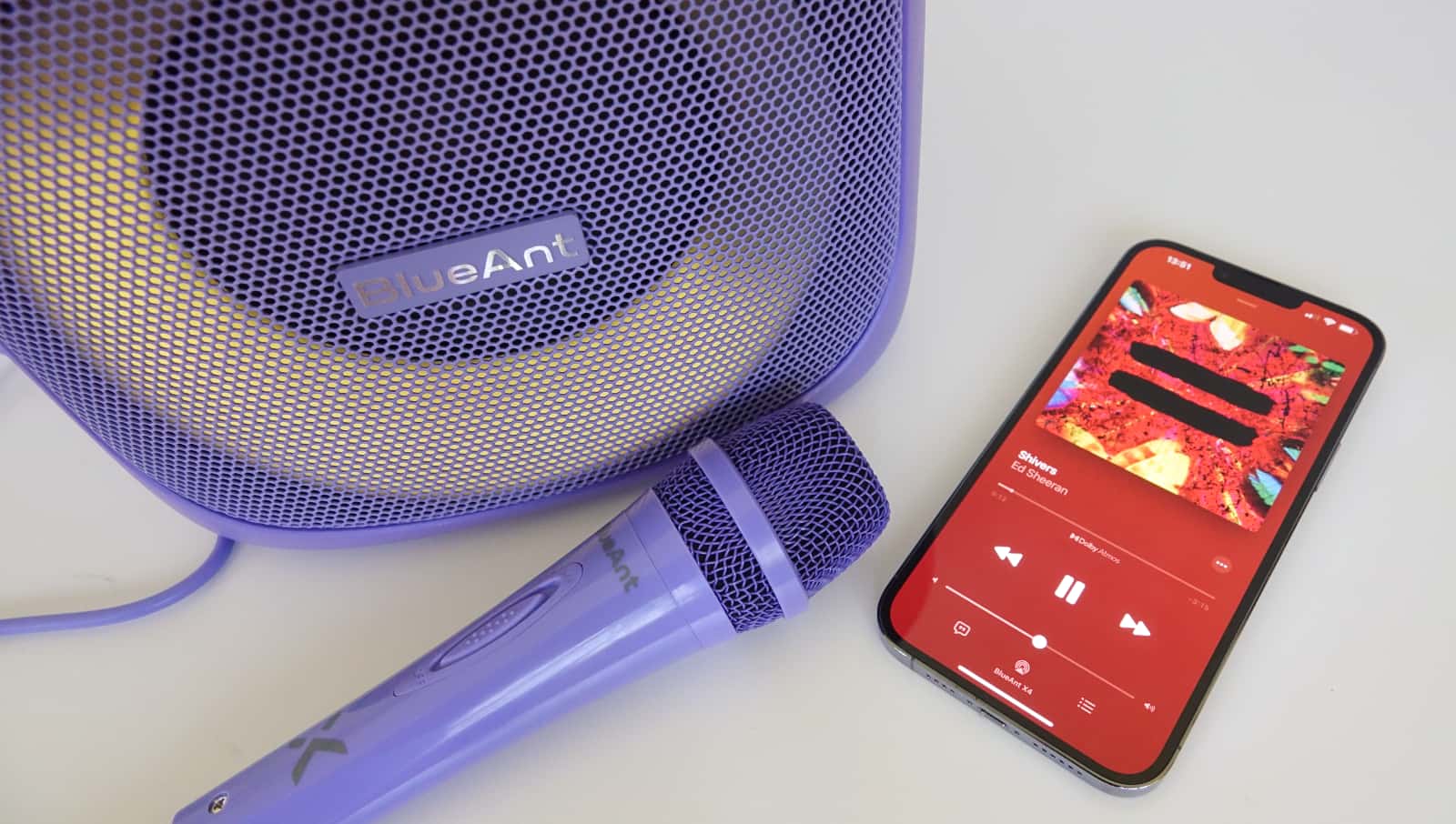 Testing it with the Pickr Sound Test, which you can listen to yourself, we start with electronic and pop. For us, that means jamming with Daft Punk’s “Contact” and Carly Rae Jepsen’s “Cut To The Feeling”, each normally with a solid punch, but seemingly lacking without the bass boost switched on. Instead of driving the bottom end punches hard, the dynamics are seemingly lost: you get a lot of sound, but not a lot of the punch, without as full-on obvious bass.

It means the sound can come off a little flat, delivering some nice highs followed by mids, but lacking in emphasis on the bass, and with that feeling coming across in almost every track we tested. Whether it was from Charlie Puth, Maroon 5, Muse, or anything else in our list, the bass without the X4’s bass boost switched on read as shallow, distinct to what we experienced in its big brother.

Press the bass button and that changes, though not with an extreme amount. We found bass boost amped it up a little, giving you that semblance of bass we were looking for in the first place.

Outside of the lack of a punchy bass, you get a decent sound that will play nicely at parties and in the home, but there are better and more balanced speakers out there, and we’re fairly sure BlueAnt has made at least one before.

While the bass needs work, BlueAnt notes that it should improve when more than one X4 is used, thanks to the ability to connect up to 100 X4 speakers together. Of course, this feature requires you to have several X4 speakers — up to a hundred, according to BlueAnt — but whether it works or not, that’s something we’ve not been able to test.

However it does mean if you’re looking to spread out the sound around your party, you have the option. 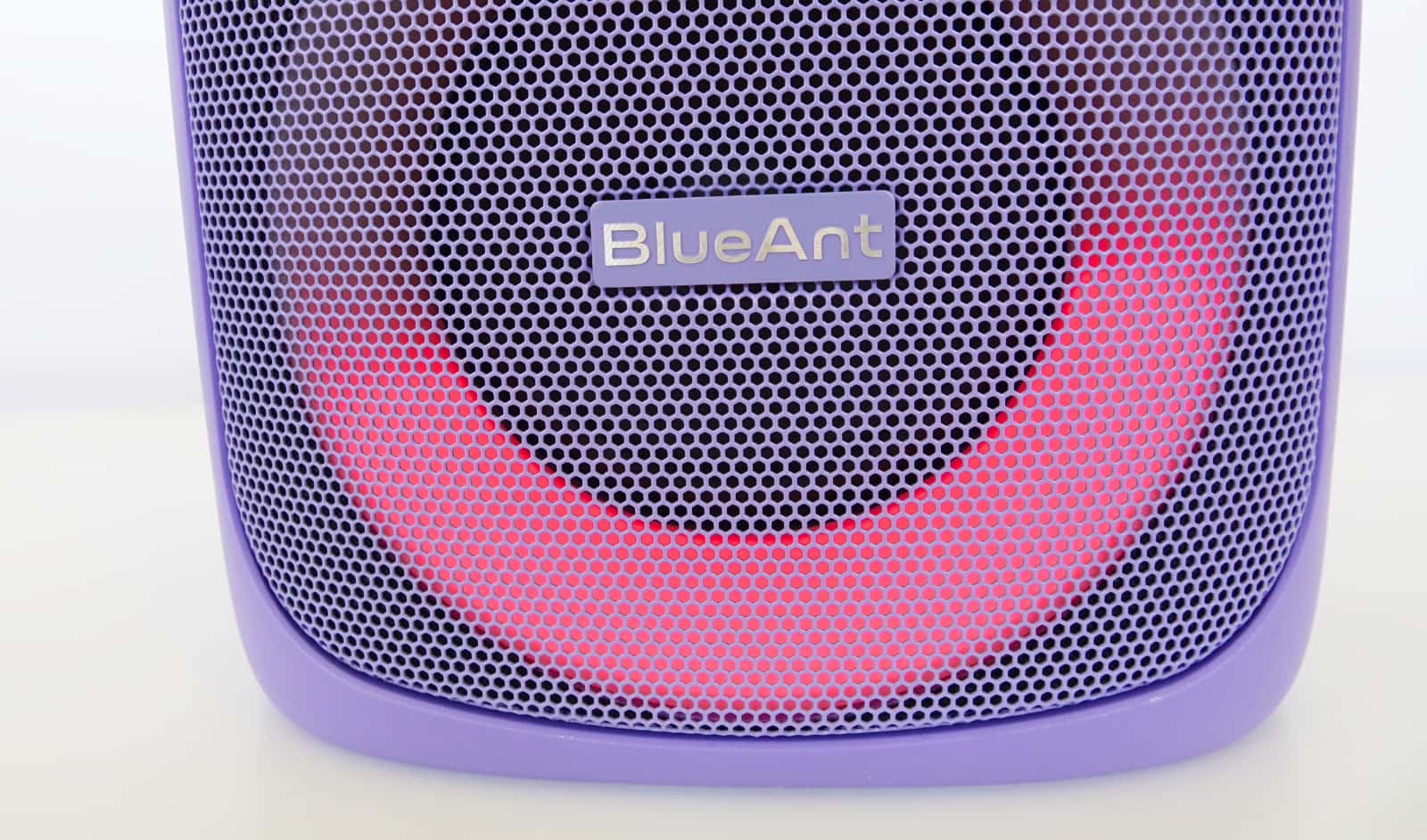 Grab the X4 and you’ll find up to 12 hours possible from the battery inside the unit, but you mightn’t get that much if you opt to use the battery for another useful feature: recharging your phone.

Yes, there’s a classic rectangular USB Type A port on the BlueAnt X4, and it means if you’ve brought a charge cable, you can fill your phone with some of the life giving juice it might require. Alternatively, just leave it plugged in while you’re playing music to the X4, keeping the battery topped up as the speaker plays your tunes.

Priced at $299, the BlueAnt X4 feels like it hits a value we don’t typically see in wireless speakers. Simply put, there’s no portable speaker like it in this price point, making the X4 a bit of a rarity.

While Sony’s wireless speakers often come with lights, they don’t come with the microphone support, giving you that little dose of karaoke you never knew you wanted and that you can now have.

It’s a little bit extra fun in a device that’s normally there for passive enjoyment. You listen to speakers, yes, but with the BlueAnt X4, you’re also allowed to engage with them, grabbing the included colour-matched mic and belting your little heart out.

That’s similar to what we experienced on the BlueAnt X5, which is basically the precursor to it all. A bigger speaker with two microphones, the X4 is the little brother built in a similar image, but it’s not quite the same. 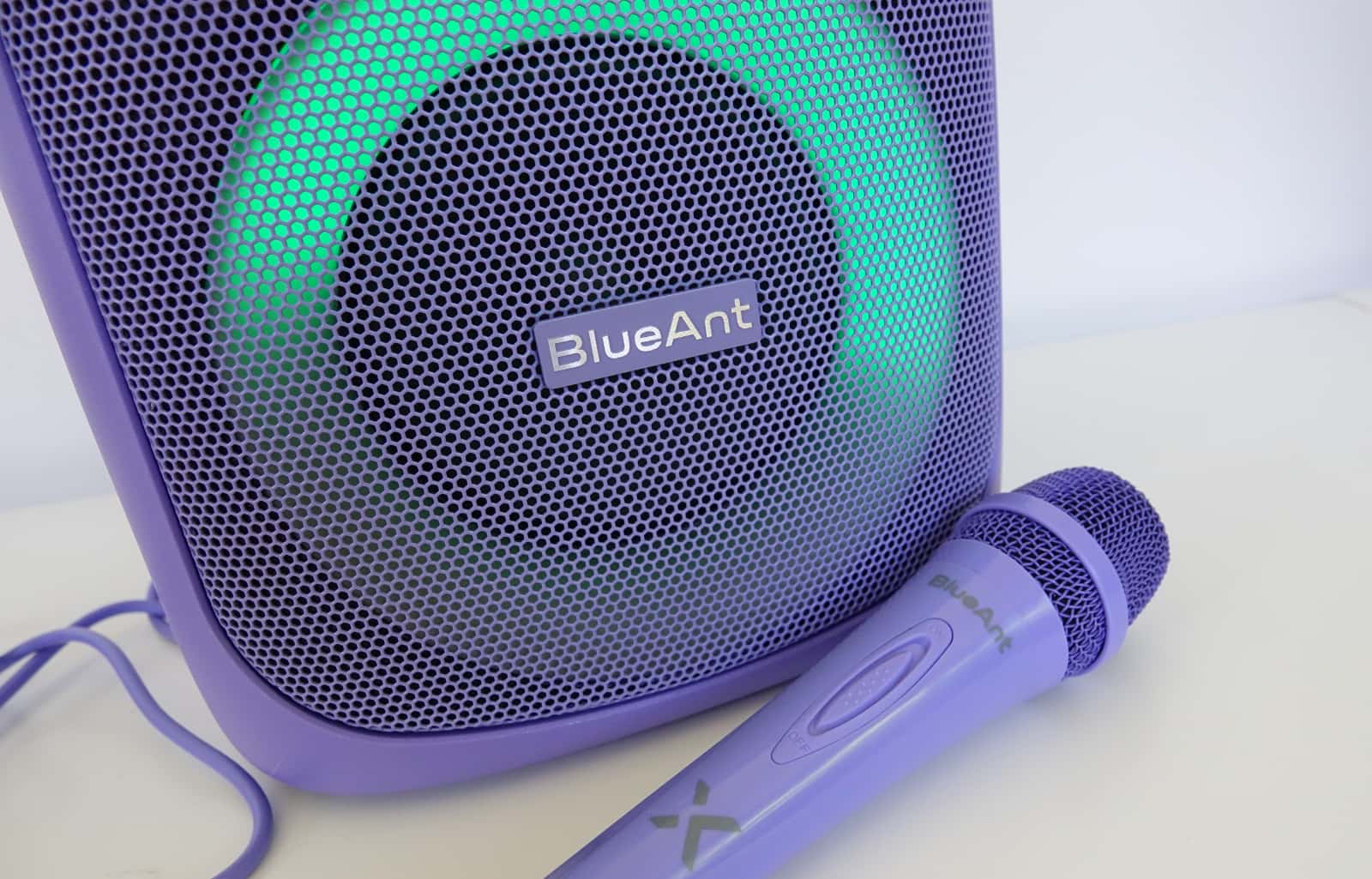 Having experienced the X4’s sibling before, we were surprised that the bass didn’t quite resonate the way it did on its big brother. Back when we reviewed the X5, it wasn’t just the volume that exploded, but the bass delivered, too.

Here in the X4, however, we found the bass lacking in almost every track we threw its way. It was only when we used the extended bass-based playlist that any bass started to shine through.

That means if you’re listening to music and you want to feel the impact of the bass, you’re going to need to leave the “Bass Boost” switched on, giving you that little bit extra oomph tracks invariably need at a party in the first place.

BlueAnt kind of gives the bass issue away in the marketing text, mind you, noting the “psycho-acoustic bass” found in the X4.

Psychoacoustic audio is another way of saying your brain is tricked into hearing it, something you can find in Sonos’ use of psychoacoustic Dolby Atmos in the Beam Gen 2, whereby you can’t actually feel the spatial audio happening all around you, but your brain is tricked into believing it is due to timing. That’s the sort of effect BlueAnt is pulling with the bass here, and it shows.

Frankly, just leave bass boost switched on to make the bass appear more strongly. It’s just an easier approach than relying on your brain in the first place. 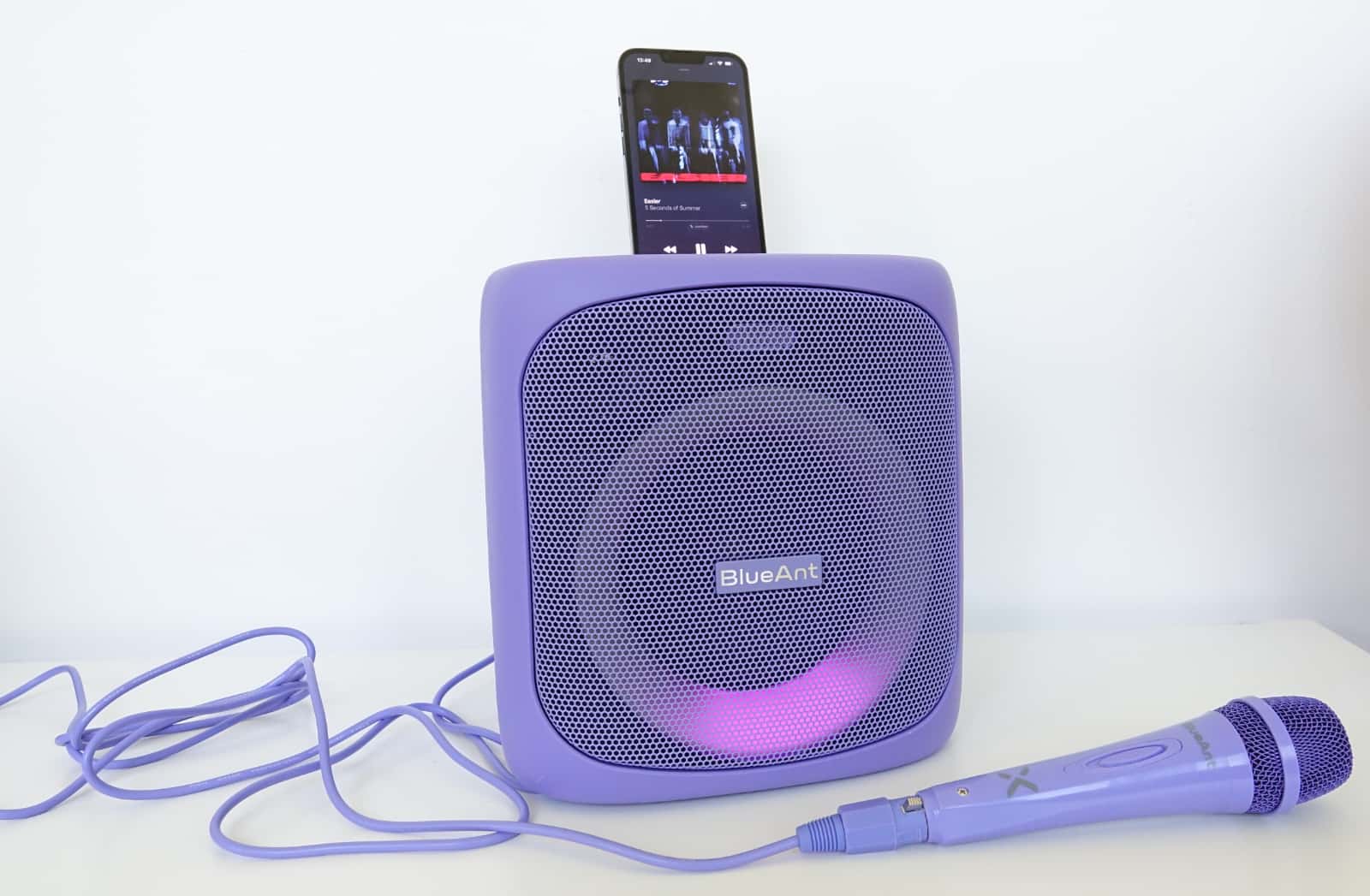 While the bass is an aspect that didn’t quite ring true in this model, the BlueAnt X4 still has plenty going for it, namely what it does well and the price it comes with.

Simply put, the X4 is bright enough and loud enough for any home or party, and it can be extended at either, as well. The support of extra speakers is a nice touch, and while we doubt you’ll necessarily have a stack in your home for it, it could make for an interesting event relying on lots of little boxes for an amplified speaker system.

For folks keen on taking the party to go, the X4 makes a solid case, especially at its budget $300 price. While the bass could be better It’s another strong effort from BlueAnt, and while we think its X5 sibling is worth the $100 more, if you need to save on speakers for your next party and don’t mind a bit of bass missing from the party, there’s ample reason to check this out.

BlueAnt X4 wireless speaker
Design
Features
Performance
Ease of use
Battery
Value
The good
Plenty of volume
Lighter than you'd expect
Built-in battery makes it good to go
Comes with a microphone
Great price
Works with several units
Can charge your phone
The not-so-good
Bass isn't anywhere near as impactful as you'd expect
3.8