A party speaker that lets you save money for the actual party? The BlueAnt X5 might make a compromise, but with its price, that might not bother you.

Even though nearly every manufacturer makes a wireless speaker, they’re not all created equal, and that’s because of a variety of reasons. Size, intended use, and style of sound are all factors that go into shaping what a speaker is good for, and whether it will be ideal for you. Every speaker is different, even if the intended goal is listening to audio.

However there’s one category where the intended goal isn’t quite the same: party speakers.

Party speakers are typically a different category, because while you’re listening to sound through them, they need to be loud, proud, and in charge. For much the same reason that you’ve probably never heard of a quiet party, party speakers tend to be brazenly big and bold, capable of lots of volume and offering up lights aplenty, too.

But they can also be quite expensive, because loud speakers and colourful lights don’t always equate to an economical price tag.

And that makes the BlueAnt X5 so appealing, offering a party speaker without the party speakers price. At a hair under $400, BlueAnt’s X5 might just be the most economical party speaker yet. Is it worth it? 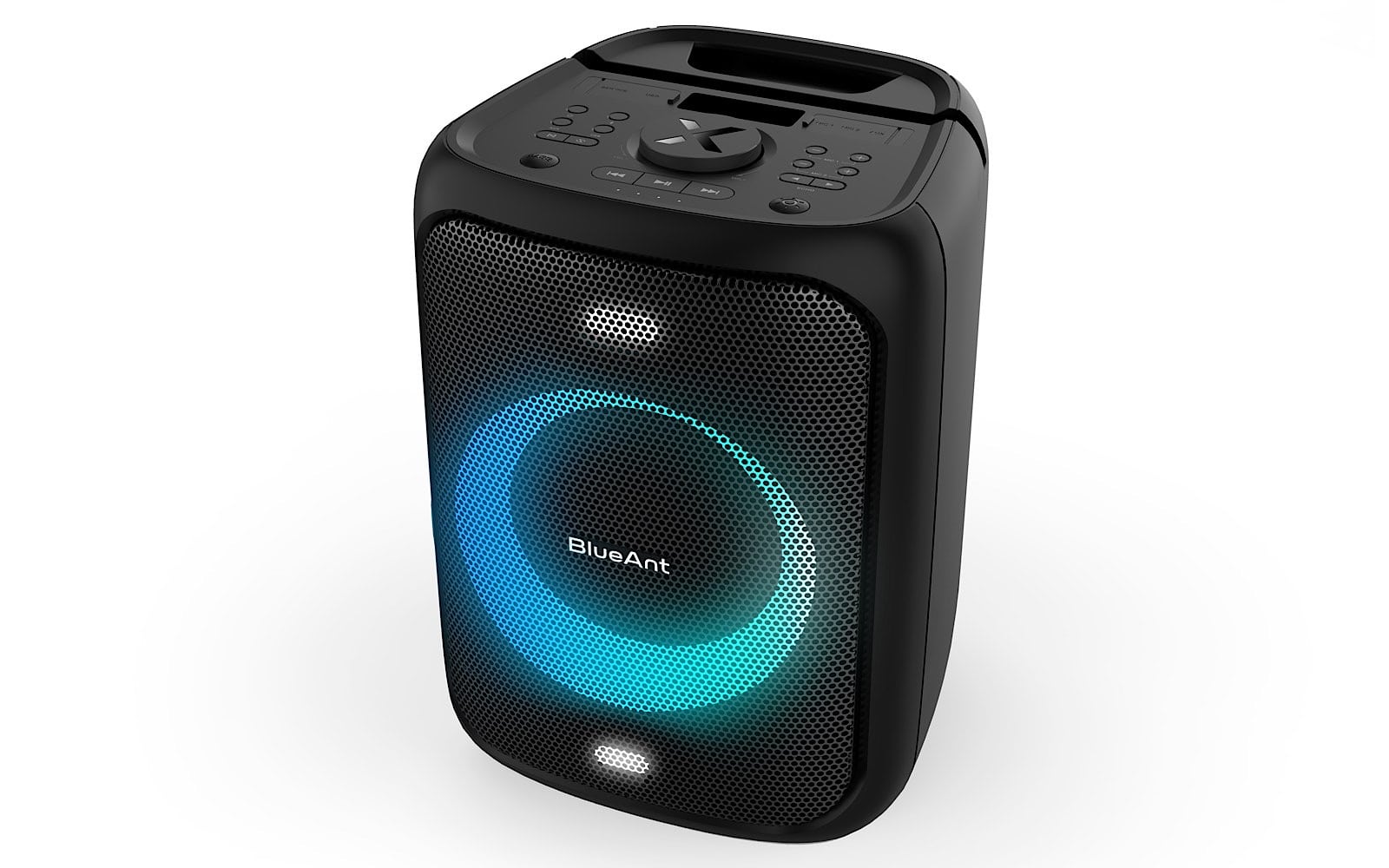 Built to look like a party speaker, the BlueAnt X5 is something different from a brand we typically associate with small speakers and even smaller wireless earphones.

Rather, BlueAnt has built something that looks more like something out of Sony’s Muteki range, with a large plastic body that encases not just a loud speaker, but also some flashing LED lights and colour strips around the speaker driver itself.

BlueAnt’s X5 speaker is made with one 6.5 inch woofer and one 2.25 inch tweeter, sitting in a speaker that weighs 4.1 kilograms and comes with a handle to let you carry it. There’s a Class D amp in the box and a maximum of 60 watts of power from the speaker, which can be paired to another X5 for more sound and stereo separation.

There’s a spot to rest your phone or tablet, and you can connect inputs either through Bluetooth, auxiliary, or even USB, plus you can plug in microphones to turn it into a speaker to sing to. It’s not true karaoke because there’s no screen to read from, but BlueAnt includes two microphones in the X5 box, so you kind of get the feeling that it is, even if it’s not. Karaoke-ish.

BlueAnt’s X5 also features a battery on the inside so it can run wirelessly, supporting up to 20 hours of playback at half volume, though you can leave it plugged in to keep it playing regardless. And you can use that USB port to charge up your phone, something that works whether or not the X5 is plugged into the wall or not.

About the only thing it’s missing is water resistance, which is not included here. 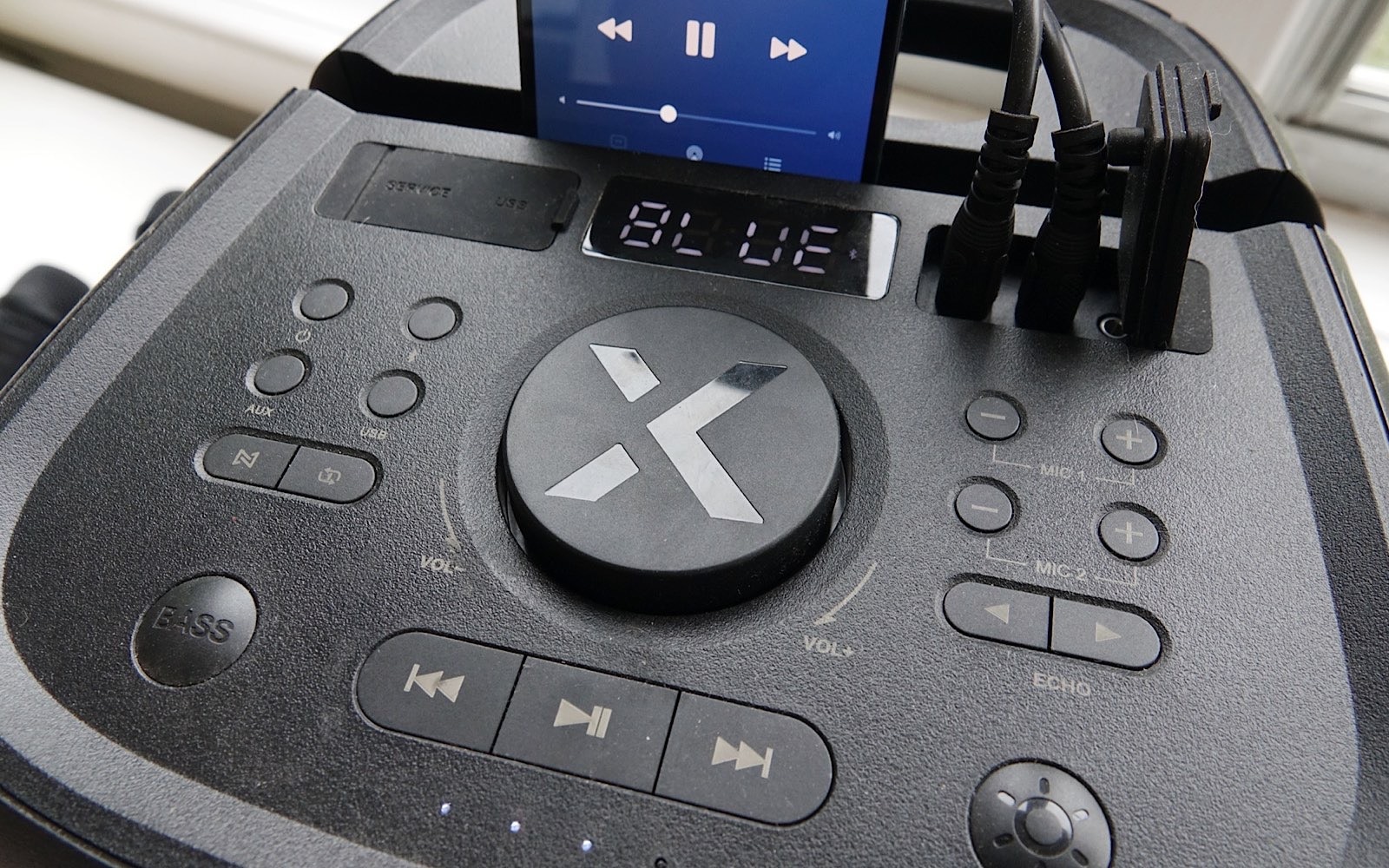 With so many inputs, the BlueAnt X5 may be one of the most user friendly speakers out there. Connecting over Bluetooth is easy — just hold down the Bluetooth button up top and connect your phone or tablet through its settings — but there’s also an auxiliary input and a USB port, too.

Bluetooth will be the one you’ll likely use, however, and it’s more or less a cinch: connect it to your phone, and whatever you use works through the connection.

You’ll find other buttons here, with controls to change the lighting, controls for making the microphones louder and with echo, and controls for playing back your media. You certainly don’t need to be within reach of your phone once the X5 is connected. 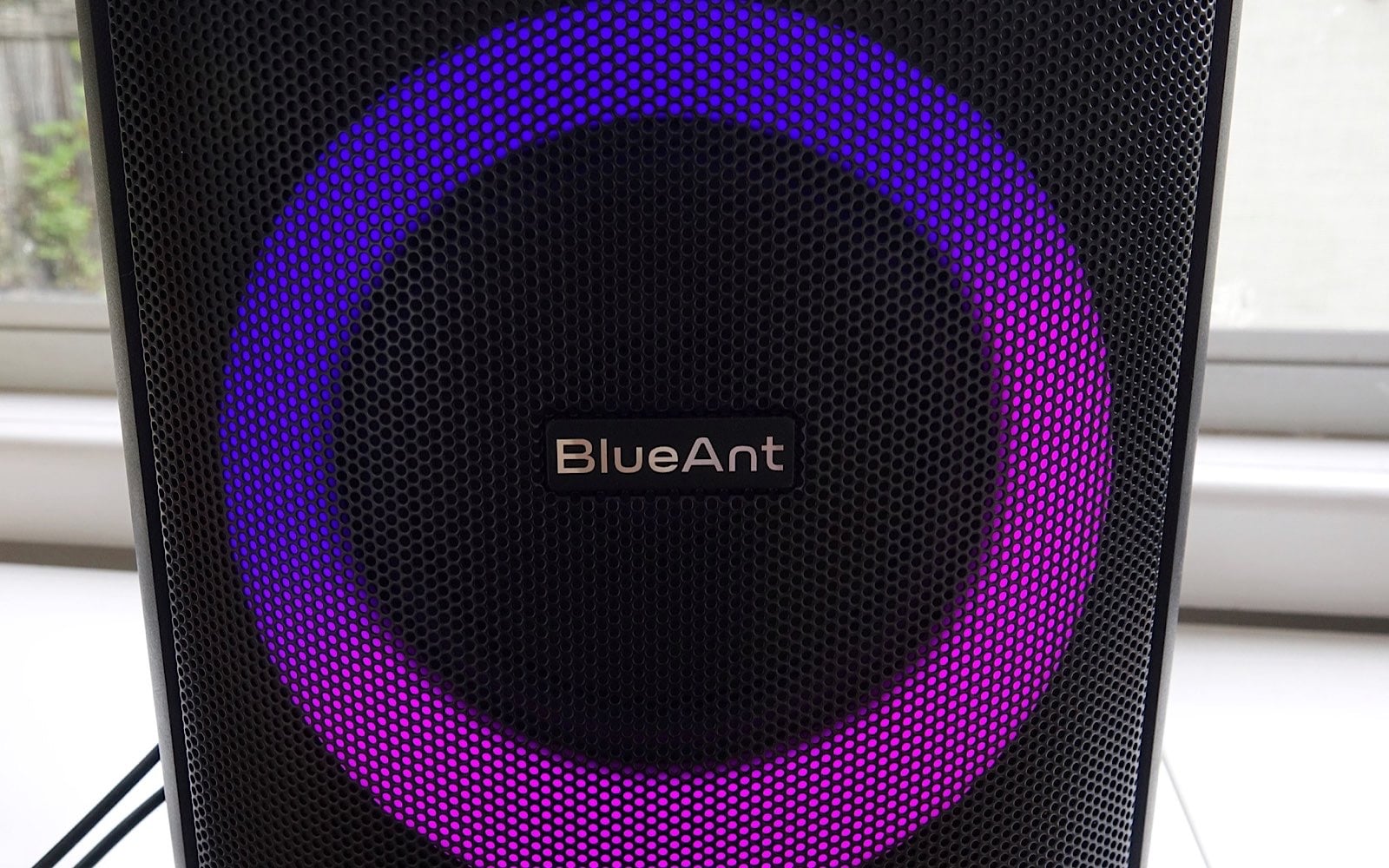 And when it is, it’s time to play music, which we’re doing with the Pickr Sound Test, which you can always listen to for yourself.

For us, that starts in electronic and pop, where we get a feel for what the X5 does: music played bright and loud, with a smattering of bass provided you’re right in front.

That’s the first impression you’ll find regardless of what you throw in, though it is possible to discover a hint more balance if you start to look at the controls on offer on the X5 panel up to. Glance your eyes to the “Bass” button, which kind of gives it away, because without it, there simply isn’t much to work with.

Without BlueAnt’s “Bass Boost” button switched on, the X5 comes off bright and shallow, as if someone the bass, even if the white LEDs are definitely flashing to the bass. Press that button, though, and you get some of the life returning to the speaker, and the whole thing comes to life.

It meant in Daft Punk’s “Contact”, we went from pretty much highs with some mids to marginally more normalised balance, and it was much the same in the rest of the tracks in the sound test.

In Ariana Grande’s “Into You”, it’s pretty clear the highs led, with vocals in charge and instruments just behind, though the lows didn’t offer much, and that was similar throughout all. Bass Boost does amp it up some more, but it’s clear the highs are in charge. Even in Mark Ronson’s “Uptown Funk”, the bass punch could feel outpaced by the highs of the drums. 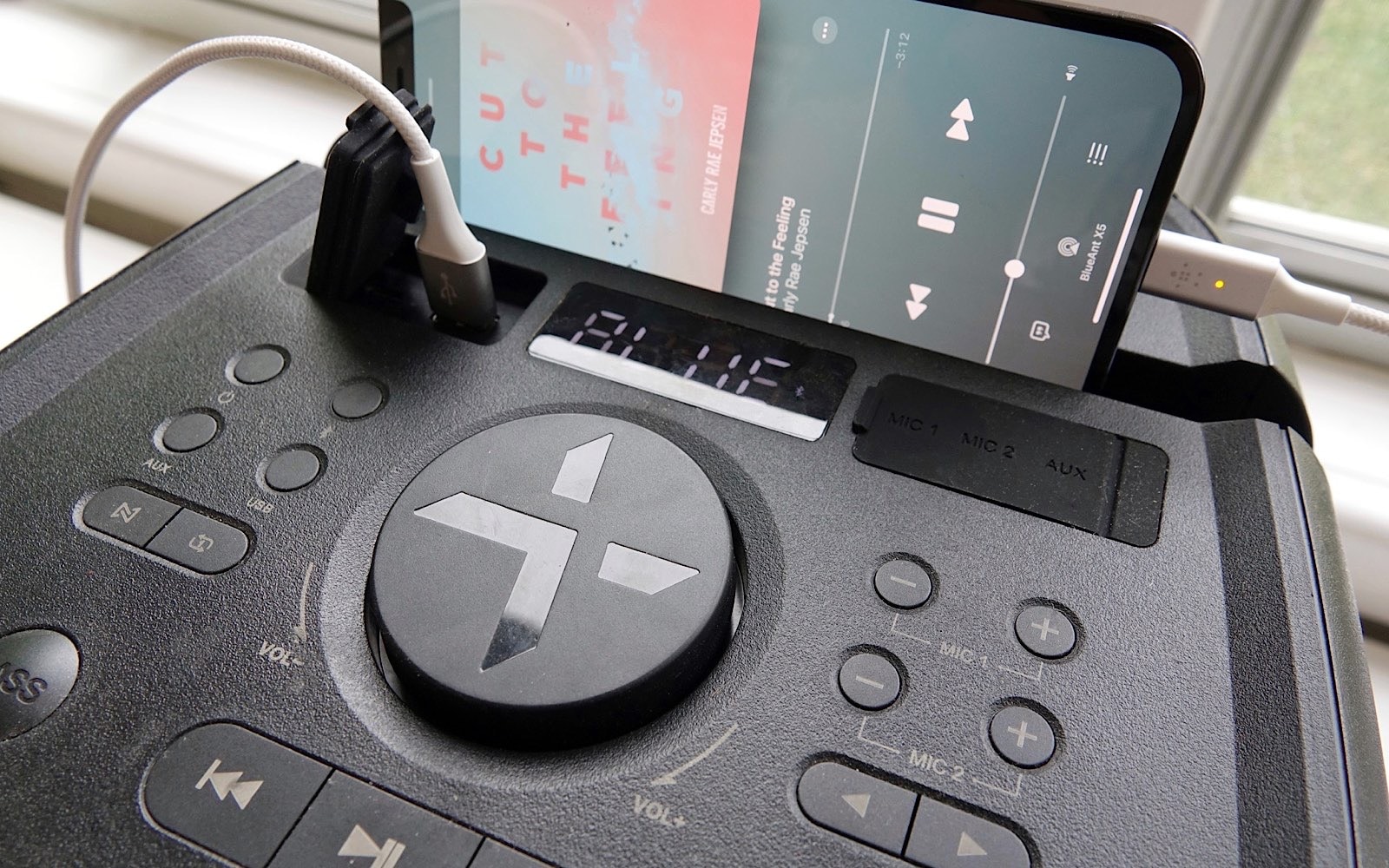 With a hint of balance offered, the best part of the BlueAnt X5 performance might come from the volume, because this thing is loud. It can resend music throughout the house from one place, as it just has so much to work from.

It seems there’s no low level of sound with a party speaker, or at least not on the X5. There’s loud, louder, more loud, still more loud, still louder, and good gosh this thing is loud. It’s almost as if the BlueAnt engineers found the Spinal Tap volume knob, because this thing goes to eleven.

Turning the BlueAnt X5 loud doesn’t improve the sound, mind you. In Charlie Puth’s “Done For Me”, the lack of a bottom end boom was obvious with the volume turned up, but we suspect it will deliver for most people. Sufficed to say, we’d leave the boost running, but don’t expect it to work miracles, especially at higher volumes.

Fortunately, you might not care. You might be in your own world singing to the speaker with the included microphones, which are easy to use and let you sing your heart out loudly over the music. Literally over it.

Supporting both microphones at the same time and echo, the microphones pretty much amplify your voice even more loudly over the top of the music, which may well be just what your party calls for. It’s not necessarily pretty, but it’s sure fun.

With or without the mics, the sound isn’t tremendously detailed, and tends to throw the sounds all together as if they’re one giant mesh of audio. That’s not necessarily a bad thing, and reads a little like a single channel speaker — which it kind of is — but it’s definitely not the most detailed sound around.

However, you’re definitely not buying the BlueAnt X5 for how it sounds. 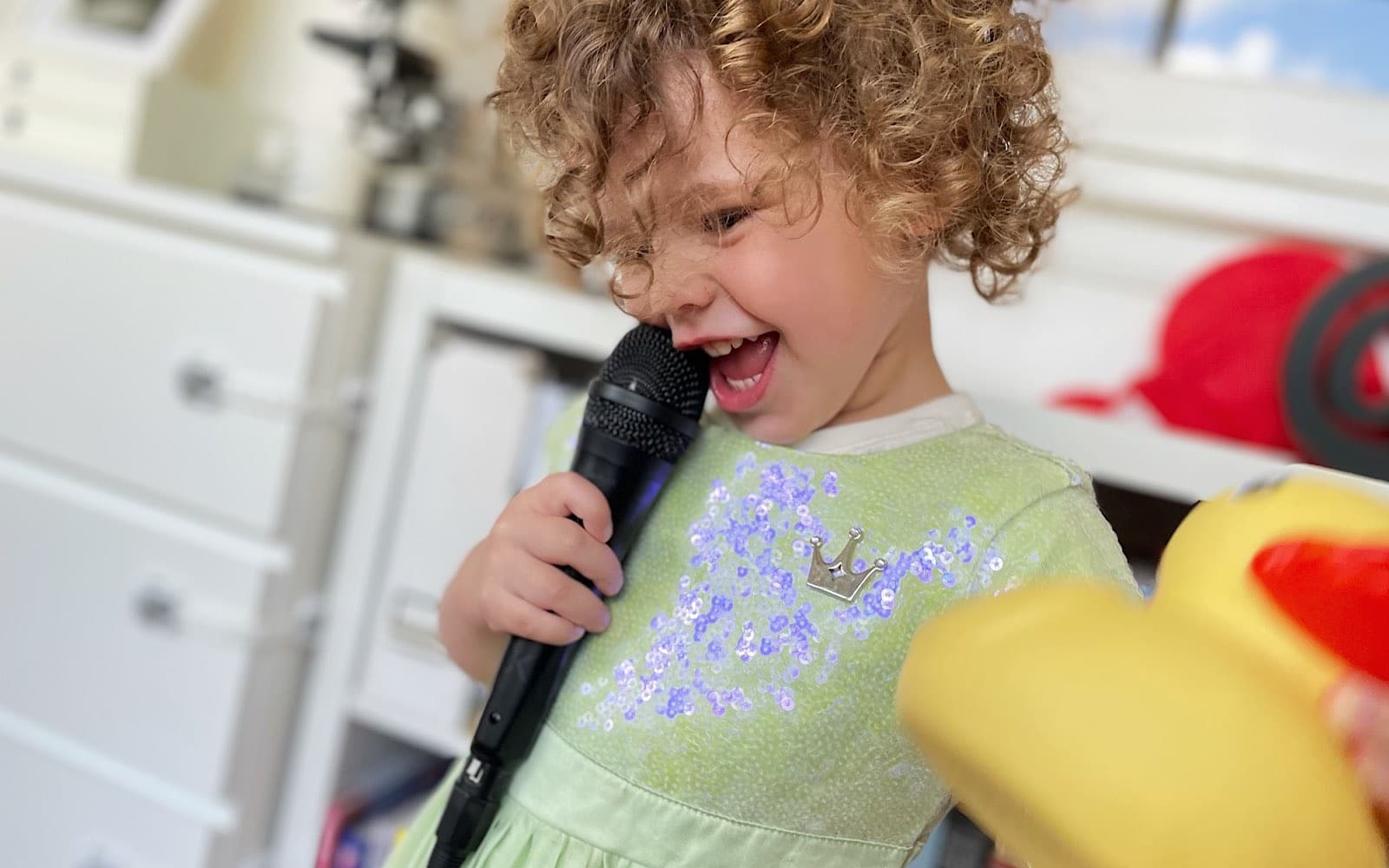 You’re probably buying it for the value it represents, which is definitely something.

At $399.95, you’ll find a loud speaker with flashing lights, two microphones, and the ability to recharge your phone, and it can even operate on its own battery.

While the sound isn’t amazeballs, that’s a pretty stellar value that’s hard to argue with, particularly if you have the urge to shine a light on a big ol’ sound.

There are clearly things we’d want to change about the BlueAnt, and one would be water resistance. The X5 is big, relatively easy to carry, and with its included battery, feels perfectly skewed to being used outside, and yet lacks water resistance. That’s a bit of a surprise, but we imagine something has to give with that sub-$500 price tag.

The other point worth noting about the BlueAnt X5 wireless speaker is the sound, because it’s a good start, but we’d give it more detail overall, because the music gels together too well to become a bit of a mess of sound.

For a party, that’s not a big problem, because again, you’re not buying this for high-class sound, but rather a big sound. It’s just not a very subtle speaker. 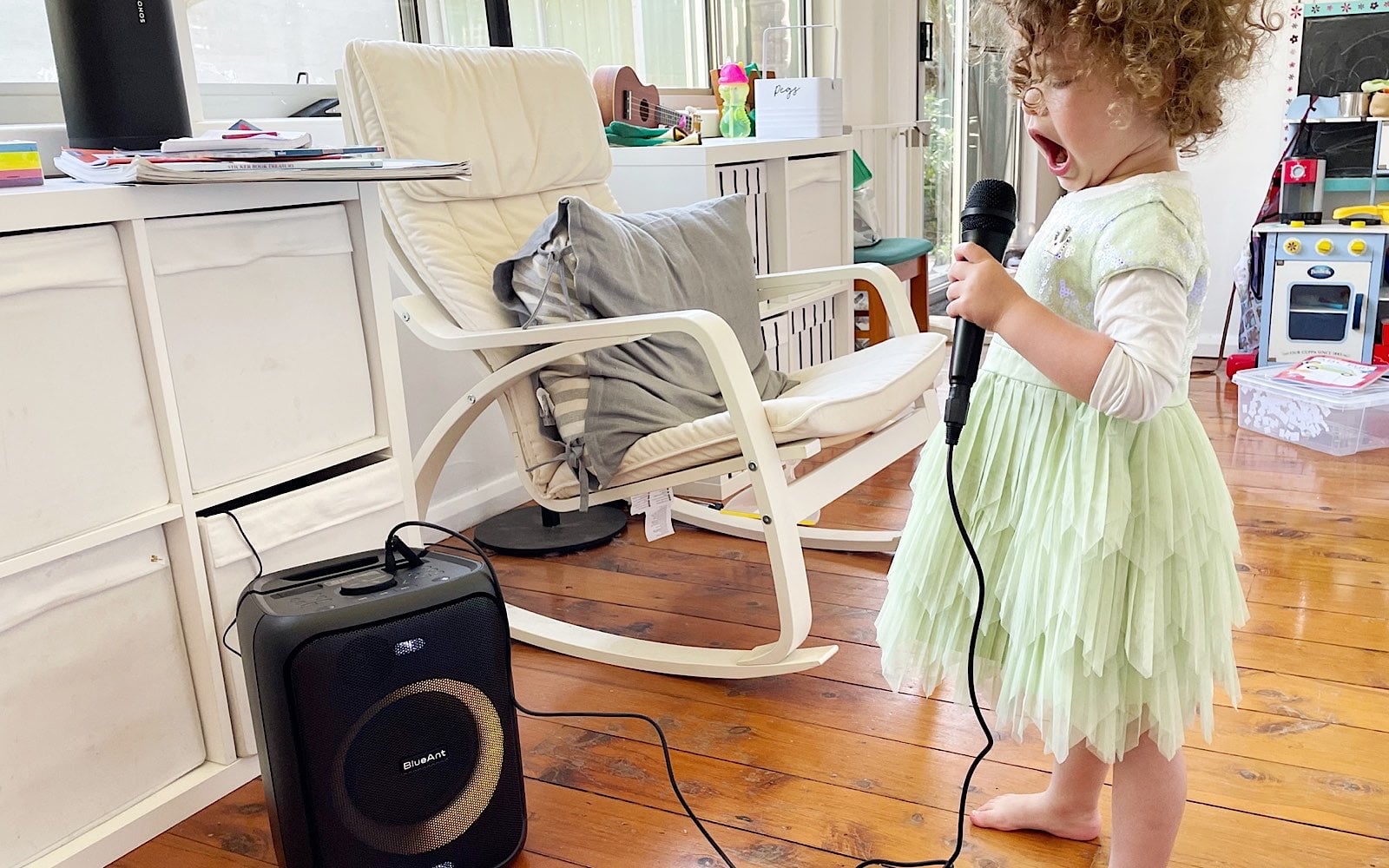 However what BlueAnt does well with the X5 is deliver the value in a big way. This is a speaker that screams party in a wallet-friendly way.

If you’re after a lot of sound for not a lot of money, the BlueAnt X5 is worth checking out. You might even save enough for the nice snacks and drinks. 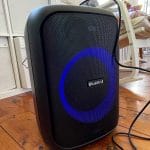 BlueAnt X5 wireless party speaker
Design
Features
Performance
Ease of use
Value
The good
Comes with two microphones
Great value
Can recharge a phone
Relatively lightweight and easy to carry
The not-so-good
No water resistance
Sound can feel shallow
Not a lot of points of difference in the volume: there's loud, louder, very loud, much louder, and oh my that's loud.
4.3