If you own an iPhone 12 or 13, you have a magnetic way to charge your phone, and if you’re looking to charge it and earphones, Belkin’s 2-in-1 MagSafe stand might have you covered.

You can charge an iPhone through its port at the bottom, or if you have something recent, you might want to opt for something wireless. Believe it or not, wireless charging has been part of the iPhone’s design since the iPhone 8 rolled out in 2017, which means provided you have a new iPhone bought in the past four years, you have wireless charging.

A name brought back from the dead, while MagSafe used to be the name Apple used for its magnetic laptop charging connector, these days MagSafe is a series of magnets built to look like a ring at the back of an iPhone that holds a wireless charger perfectly in place to keep the wireless charge flowing properly. Using MagSafe means you’ll get a fast wireless charge, supporting up to 15 watts (15W) of power, all while holding the device in position picture perfect.

MagSafe is something only owners of the iPhone 12 and iPhone 13 models get, and means they can charge their phones using magnets, suspending them above the typical charging stands many of us use today.

And in Belkin’s latest take on that, it’s a way to hold a recent phone up, keep it charged, and even keep a pair of wirelessly charged earphones topped up with power, as well.

What is the Belkin MagSafe 2-in-1 stand? 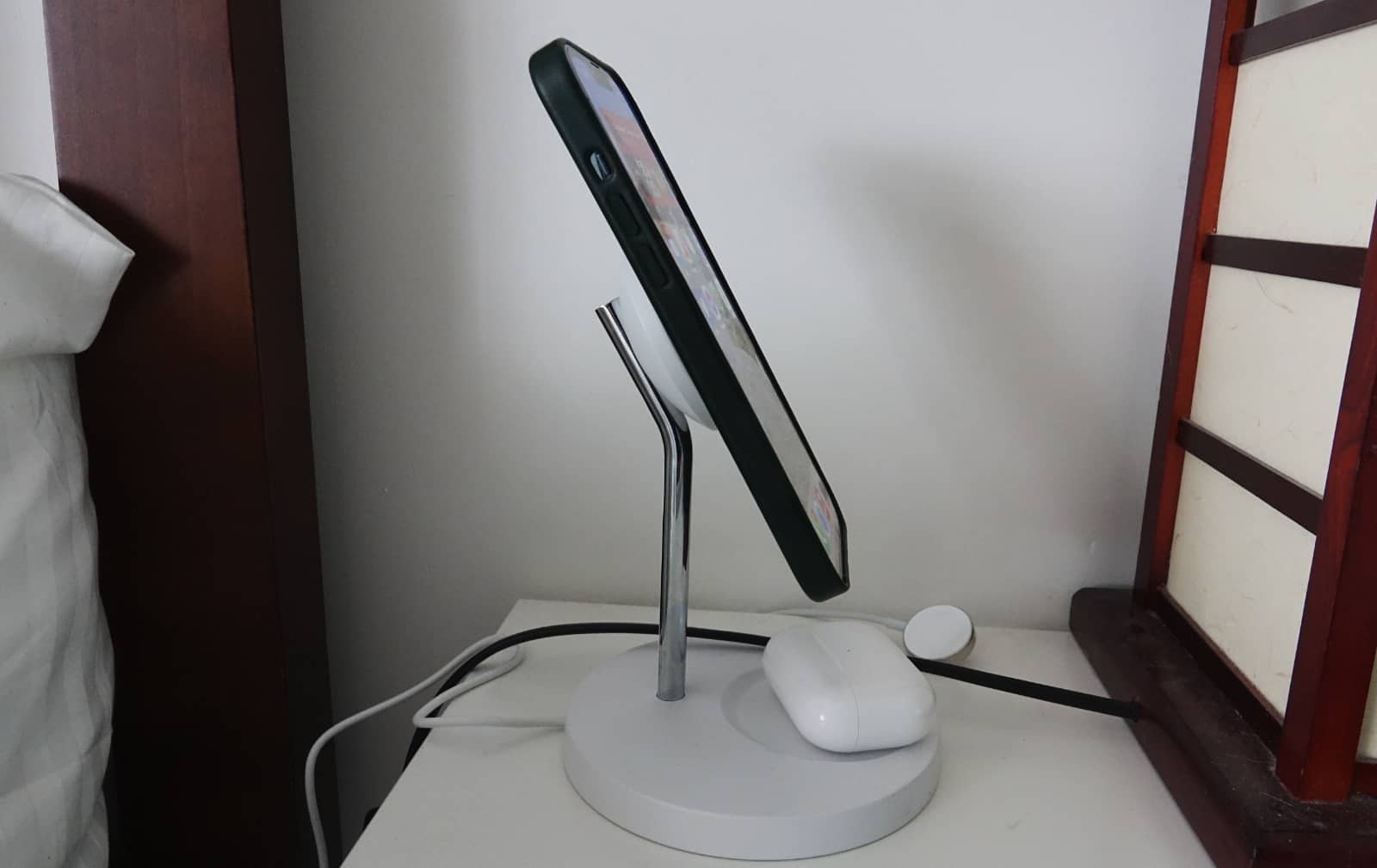 Consisting of two bits of plastic connected by a metal pole, the Belkin MagSafe 2-in-1 charging stand is a fairly minimalist approach to design, giving it a simple aesthetic that’s easy to appreciate.

There are two charging plates on offer here either in white or black (we reviewed the white one), with a 15W charger for the MagSafe, though we doubt it’s as high for the secondary charging port at the bottom. Belkin hasn’t noted how high that is, but given that it’s made for earphones, we suspect it’s a 5W charger. 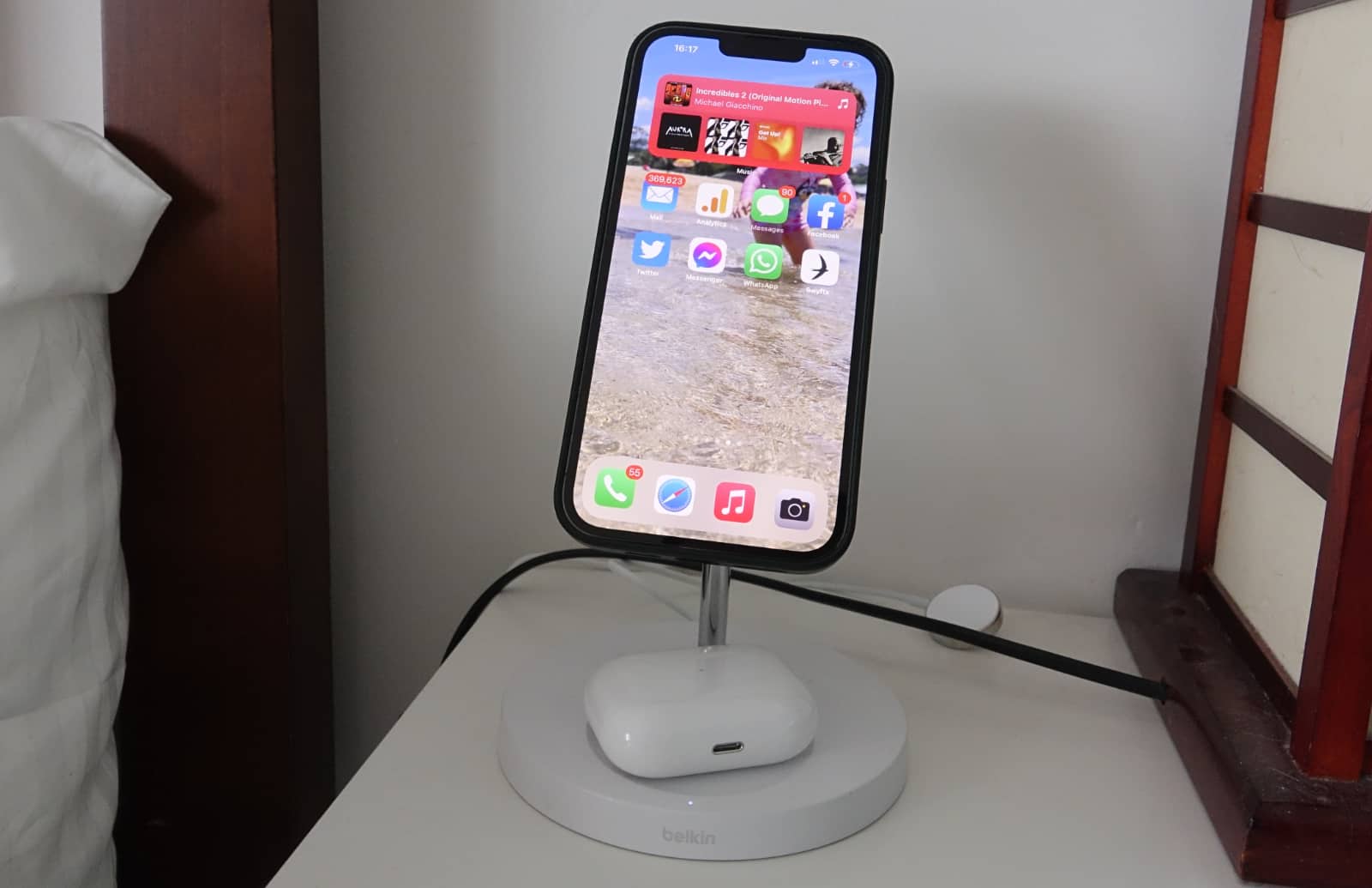 Charging gadgets are rarely rocket science, and with good reason: they’re supposed to be easy devices that let you plug and play, or even plug and let it happen in the background, which is more the point.

In the case of the Belkin Boost Charge Pro 2-in-1 MagSafe stand, that’s exactly the point: plug it into the wall, snap your iPhone 12 or iPhone 13 model in place, and it’ll charge it up.

There’s also a spot at the bottom of the base plate carved out allowing you to rest the charge case for a pair of earphones with a Qi charge case. That’s pretty much any and every pair of earphones with a wireless charging case, including the second-gen AirPods with the wireless charging case, the AirPods Pro, Sony’s WF-1000XM4, the Bose QC Earbuds, the Oppo Enco X, and many others.

Built for the desk, beside the bed, or maybe even the kitchen, the Boost Charge Pro 2-in-1 MagSafe stand provides an easy way to hold a phone up and keep it charged, while also keeping a pair of earphones charged, as well.

It’s an easy gadget to understand, and you can even unplug the cable from the underside and use it simply as a stand, handy if you want to talk to people over WhatsApp or FaceTime hands free.

What does Belkin’s 2-in-1 MagSafe stand need? 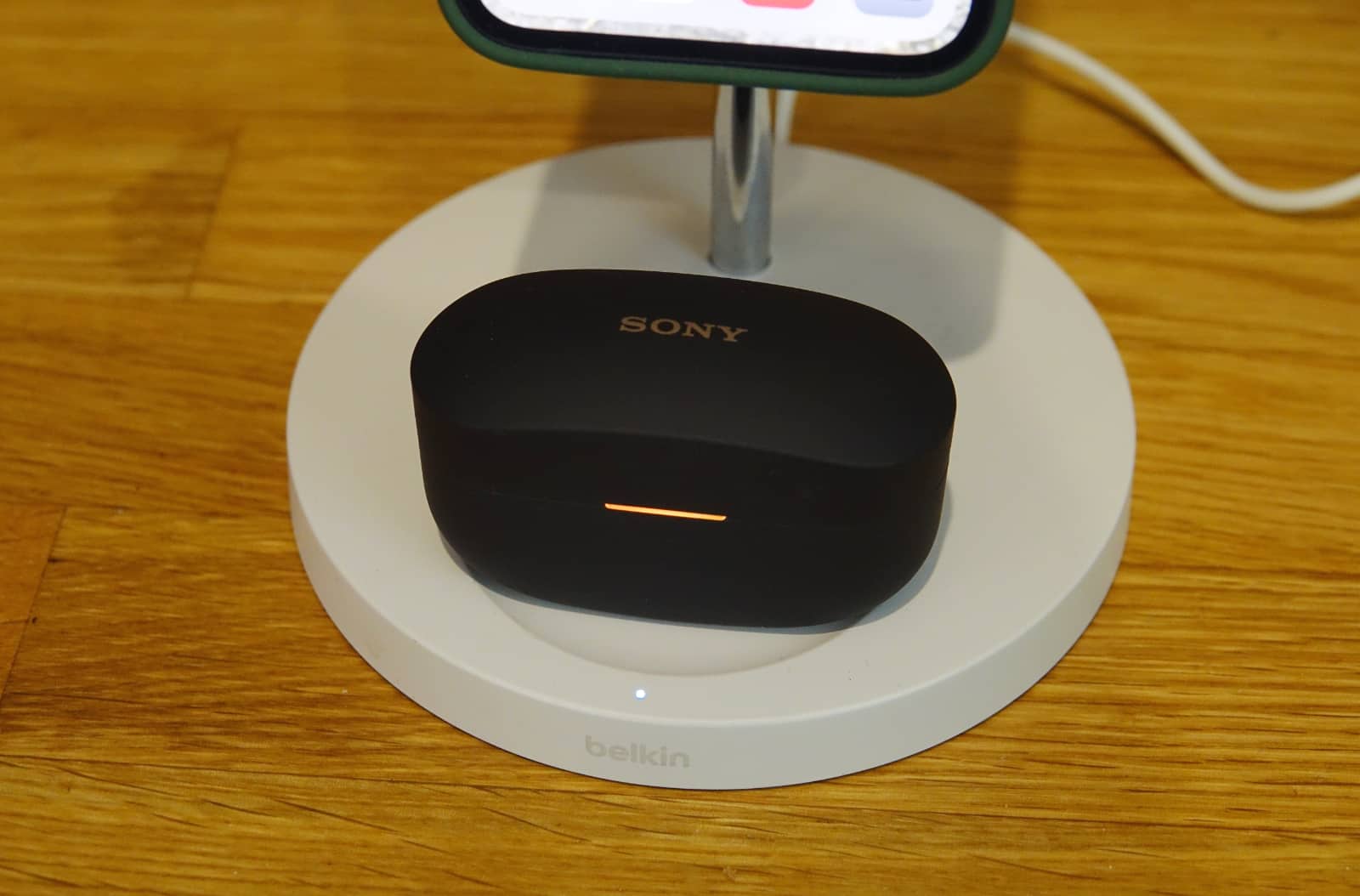 As far as MagSafe stands go, Belkin has a winner here, especially if you’re after something with a minimalist design that can charge your phone and earphones with no dramas. This handles both, and does it well, not that either are a remarkably difficult task.

However two things would make it perfect, and they’re both missing in action.

For starters, there’s no way to position the MagSafe charging block the way you want to, and means you can’t aim it anywhere. You can rotate your phone on the magnetic MagSafe circular mount, but that’s it.

What we’d love is for you to be able to tilt the MagSafe block so that it could be aimed slightly lower. As it is, it means not you have to have a very specific position, and if you’re using it for someone smaller — say kids at a table — the camera might be angled too high to see them. It’s something a ball head could have solved, and one of those aspects we’re kind of surprised isn’t included in a $150 charging stand.

Mind you, it probably gives Belkin the option of selling a different style of stand, given it has a face-tracking iPhone stand available as well. This isn’t it, but we’d have loved for a little more positional control all the same.

The other surprising aspect missing in action is something Belkin has included in the past in prior charging stands, yet isn’t in this one: a USB port.

By itself, the Boost Charge Pro 2-in-1 MagSafe stand charges an iPhone with MagSafe and a pair of wireless earphones. However, there’s no support for an Apple Watch or any other wearable because there’s no USB port on the back of the charging stand. It means if you use a wearable, you’ll still need to use whatever wall-based USB port you normally rely on, or something else, with no way to streamline using this charger.

To its credit, Belkin does make a charging stand with the Apple Watch in mind, but this isn’t it, and heaven forbid you use some other wearable, like a Fitbit or Galaxy Watch or even a Whoop. None of those are directly compatible with the Belkin MagSafe stand, and will need to be plugged into a USB port all the same.

That is understandably better, but still a little on the high side, especially when the comparative 3-in-1 from Mophie is closer to $130 RRP, and when rival 2-in-1 devices edge closer to the $100 mark.

For the price, Belkin’s MagSafe stand can seem a little overkill, though it does do the job quite well and in a beautifully minimalist way. The simple look is what makes this MagSafe charger stand out, even if it needs that little bit extra flexibility with a USB port.

It’s worth checking out if you’re looking for a way to keep your iPhone charged by your bed or in the kitchen, and don’t need a way to keep a wearable easily charged with it. 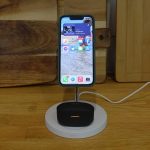