One of those audio names that carries heritage, Technics is entering the world of truly wireless noise cancelling sound with the AZ70W. Is this first effort truly excellent, too?

The Technics name is back, and it’s not just here for record players. While Panasonic’s vinyl and high-res audio focused brand is well-known for sound, it’s not famous for truly wireless and cordless sound.

And yet here we are in 2020 with an effort of that, as Technics enters a world that’s both a little foreign and yet very aware of what this brand can bring. The first effort delivers a lot of battery life and a big driver, though for a price you might not expect.

Is the AZ70W one of the best pairs of wireless noise cancelling earphones you can find? 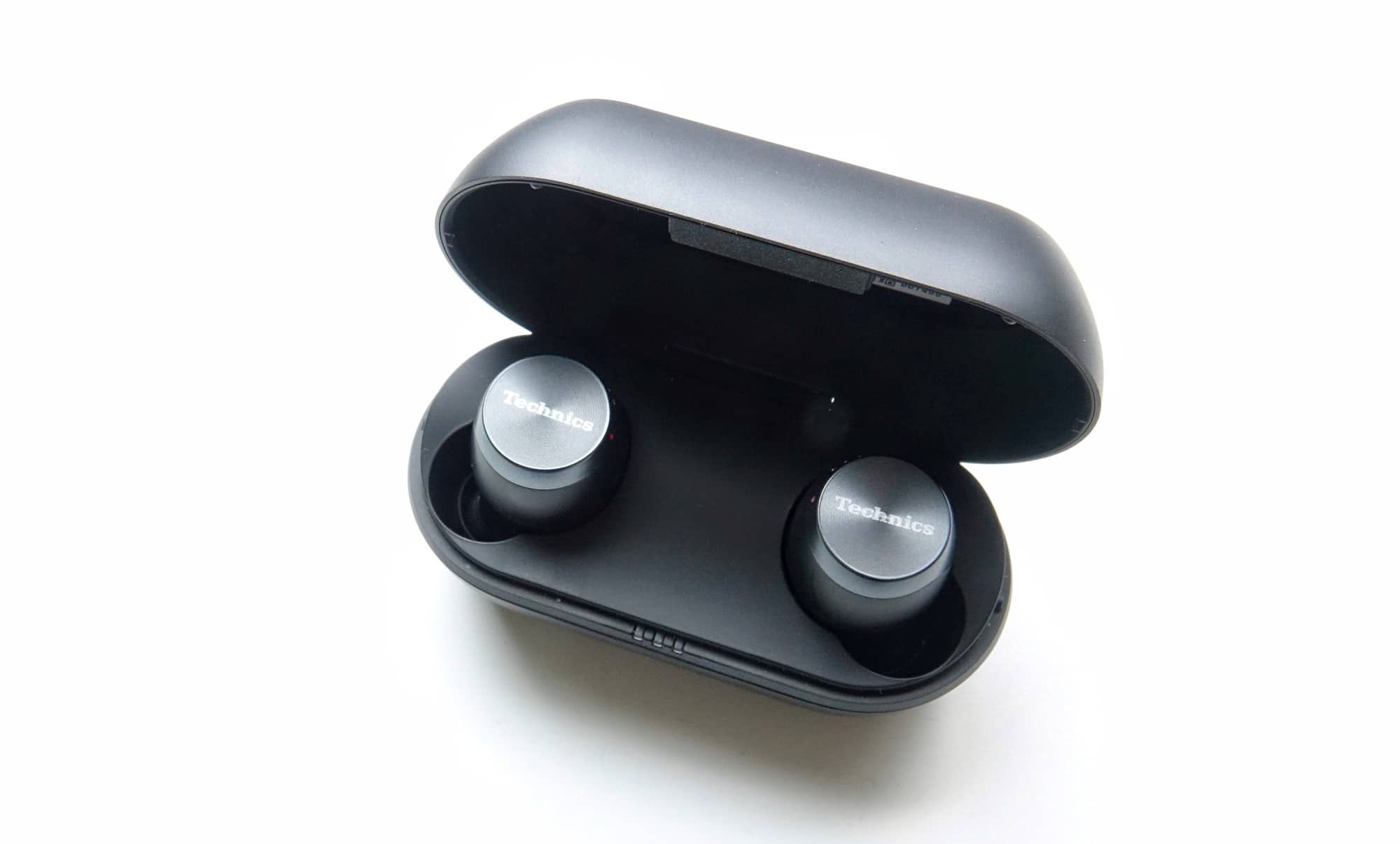 Technics’ first pair, the EAH-AZ70W doesn’t have the easiest name, but it does seem to pride itself on technology, using a fairly large 10mm driver, plus some graphene coating to cut back on vibrations. Graphene isn’t something we typically hear of in earphones, and it’s paired with a large casing, something Technics calls an “Acoustic Control Chamber”, which uses the large size of the earphones to give more airflow for the sound.

And the AZ70W are fairly sizeable earphones, but they’re sized not just for the large driver and cavity for the driver, but also the microphones dealing with active noise cancelling.

As such, you’ll microphones on the inside, outside, and for calling, and using these to deal with the noise, as well as a combination of noise cancelling processing, with a feed-forward system that uses software and hardware to deal with the sound, while processing deals with other bits, and letting the user control what’s coming through in an app for Android and iOS.

Touch panels can also be found in this pair of earphones, allowing you to control what the earphones do by taps, and there’s a battery life of around 6 to 7 hours per charge, plus an extra 12-13 hours in the case. That case is charged by USB Type C, and is a little bigger than your standard AirPods case.

The Technics AZ70W have a modicum of splash resistance, and are rated for IPX4. 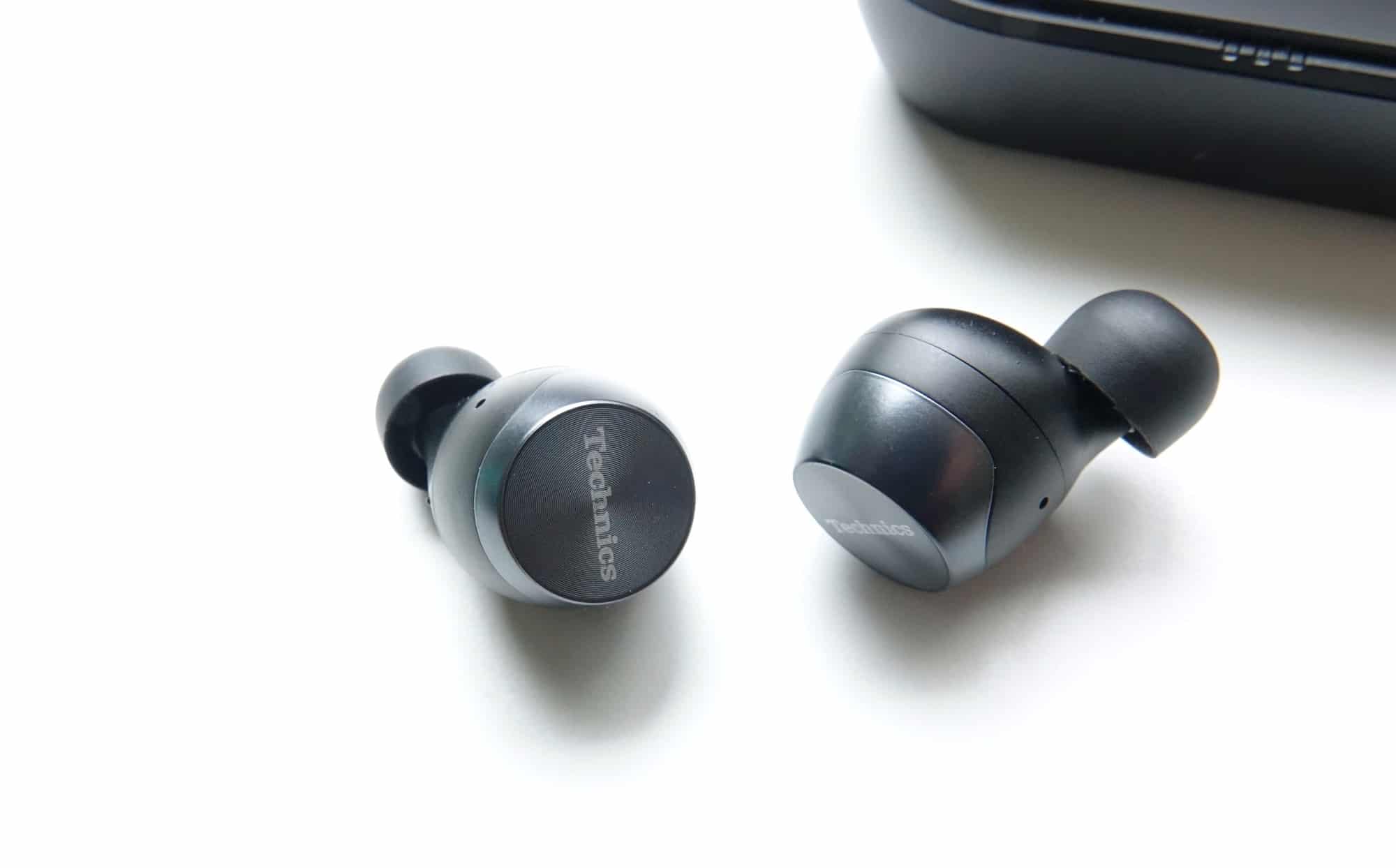 With the features out of the way, it’s time to get cracking and using the AZ70W, and while there’s a touch panel here, the operation is rather simple, and a whole lot like other earphones out in the world.

Each earphone offers a touch pad, and each offers a light. Unlike Audiofly’s truly wireless earphones, the light is tiny, so much harder to notice, however the touchpad operation is delightfully consistent with other earphones: touch once to pause and play regardless of the size, while two or three presses on the left changes the volume, and two or three on the right side changes tracks. 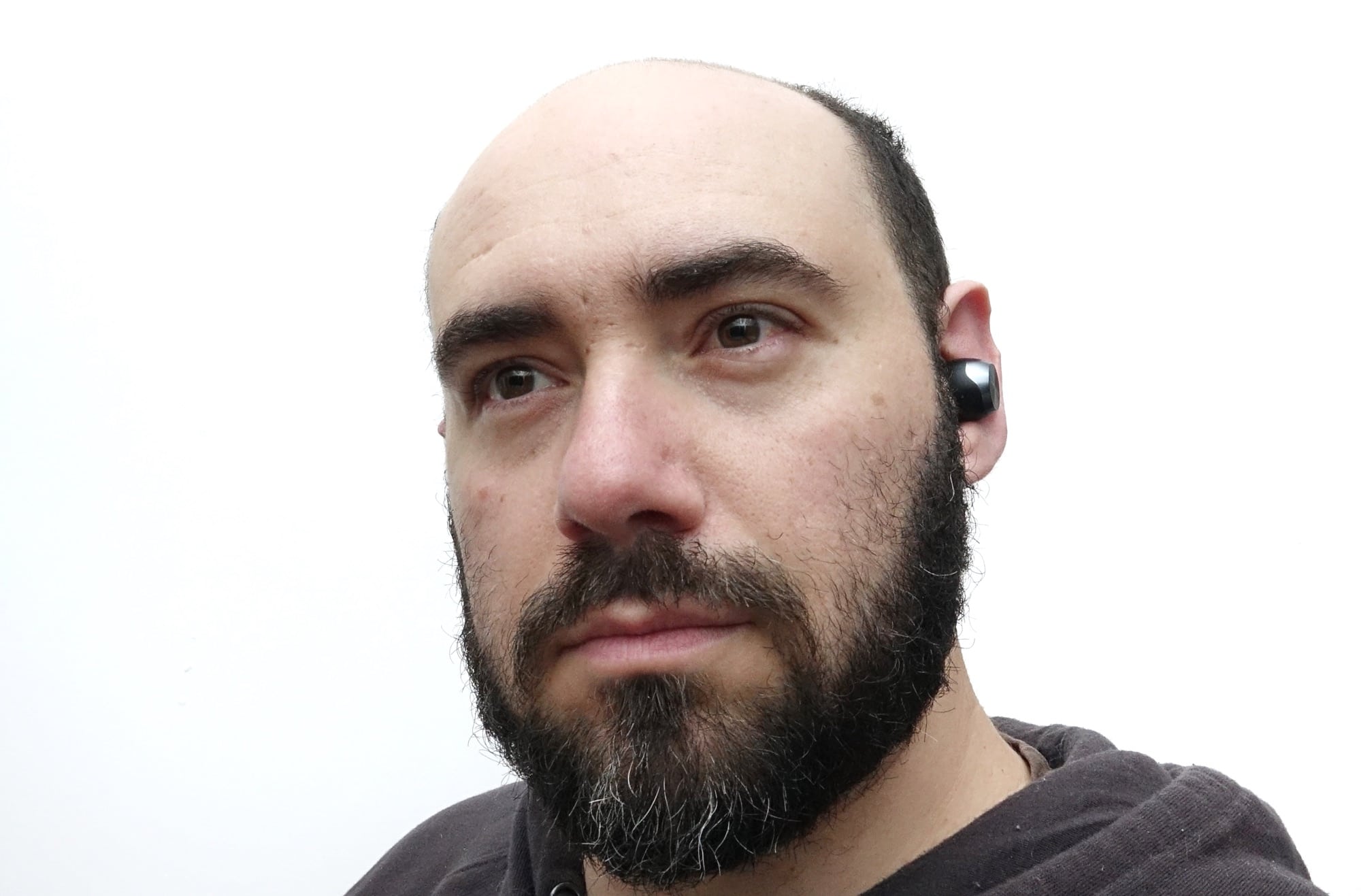 While using the Technics AZ70W is about as consistent as other earphones with a touch panel, the performance is what really matters, so let’s get stuck into that.

And as usual, we’re testing it with the Pickr Sound Test, which you can try for yourself with Spotify, Apple Music, YouTube Music, and Tidal.

That starts with electronic via Tycho and Daft Punk, and each of those deliver clarity in sound here in the AZ70W, starting with the bass drop in “Glider”, which is noticeable and heavier than you might expect from the size of these earphones. It’s a solid start, with the sound in our electronic test tracks balanced bordering on warm, and easy to listen to.

Through to R&B, and we’re treated to a subtle but still noticeable punch of bass in both Ariana Grande and Mark Ronson, with the mids continuing that solid push. The balance is definitely there in the Technics AZ70W, but mids can feel like they have a little more grunt to them, with the lows and highs just behind. We wouldn’t call these earphones overly warm, but the balance is definitely strong, with great detail and strength.

In fact, in Charlie Puth’s “Done For Me” sounds superbly strong, with a great balance to the entire spectrum, letting you hear the crisp vocals overlaid on the instruments.

Over to pop and rock, and the solid quality continues, with a decent albeit slightly understated thwack from the bass in Muse’s “Madness”, plus excellent clarity in Rage’s “Take The Power Back”. Older rock excels, too, as Paul Simon’s “You Can Call Me Al” delivers a fairly wide sound stage in the Technics AZ70W, with the individual drums and instruments clear across the track.

With a little lighter sounds in classical and jazz, we found the AZ70W could be delicate, as well, but didn’t fare as well in these areas. Take the bass in Christian McBride’s duet with Regina Carter, “Fat Bach and Greens”, which felt a touch shallow in comparison to what we’re used to, though still managed to sound nice. Much like we were hearing in some other track, the slightly understated bass was far more removed here, a shame given how solid it is everywhere else. One of our favourite jazz track to test with, the live Ray Brown Trio piece “The Real Blues” lacked the drive we wanted to hear from Brown’s upright, and something that can be found on other headphones. 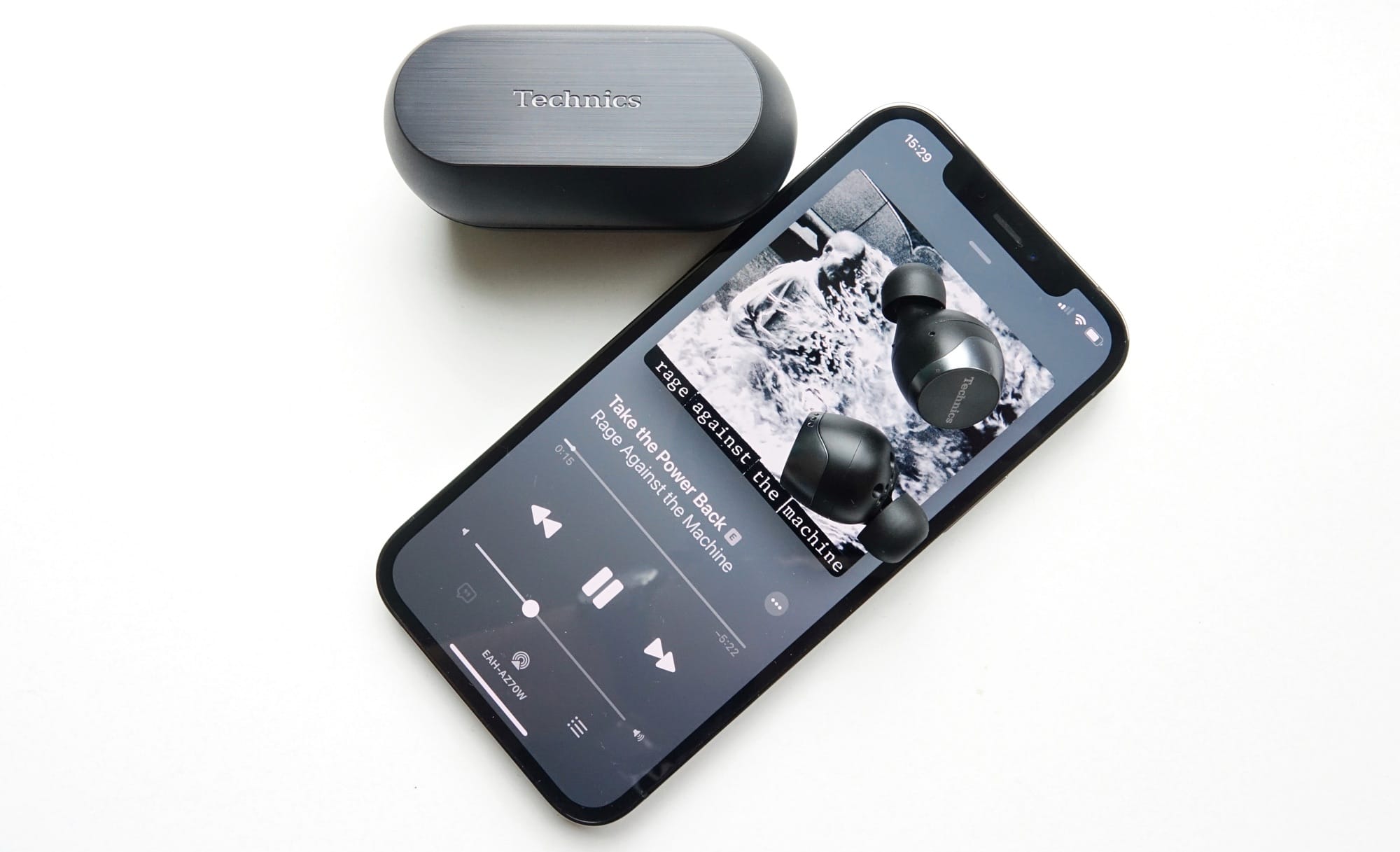 The Technics AZ70W are still fairly balanced and quite strong overall, but they excel in music styles outside of acoustic, working better when more is already in that bottom end.

Sufficed to say, if you’re big into rock, pop, soul, R&B, or electronic, the Technics AZ70W could just have your name on it.

Noise cancellation also isn’t bad here, with the Technics app offering an element of control for what you can hear, allowing you to customise how much noise is cancelled and how much the ambient sound is letting in.

That’s a fair degree more customisation than some other earphones, though the Technics AZ70W are not adaptive in any sense of the word, and won’t automatically switch to a different profile based on where you are or what’s around you. 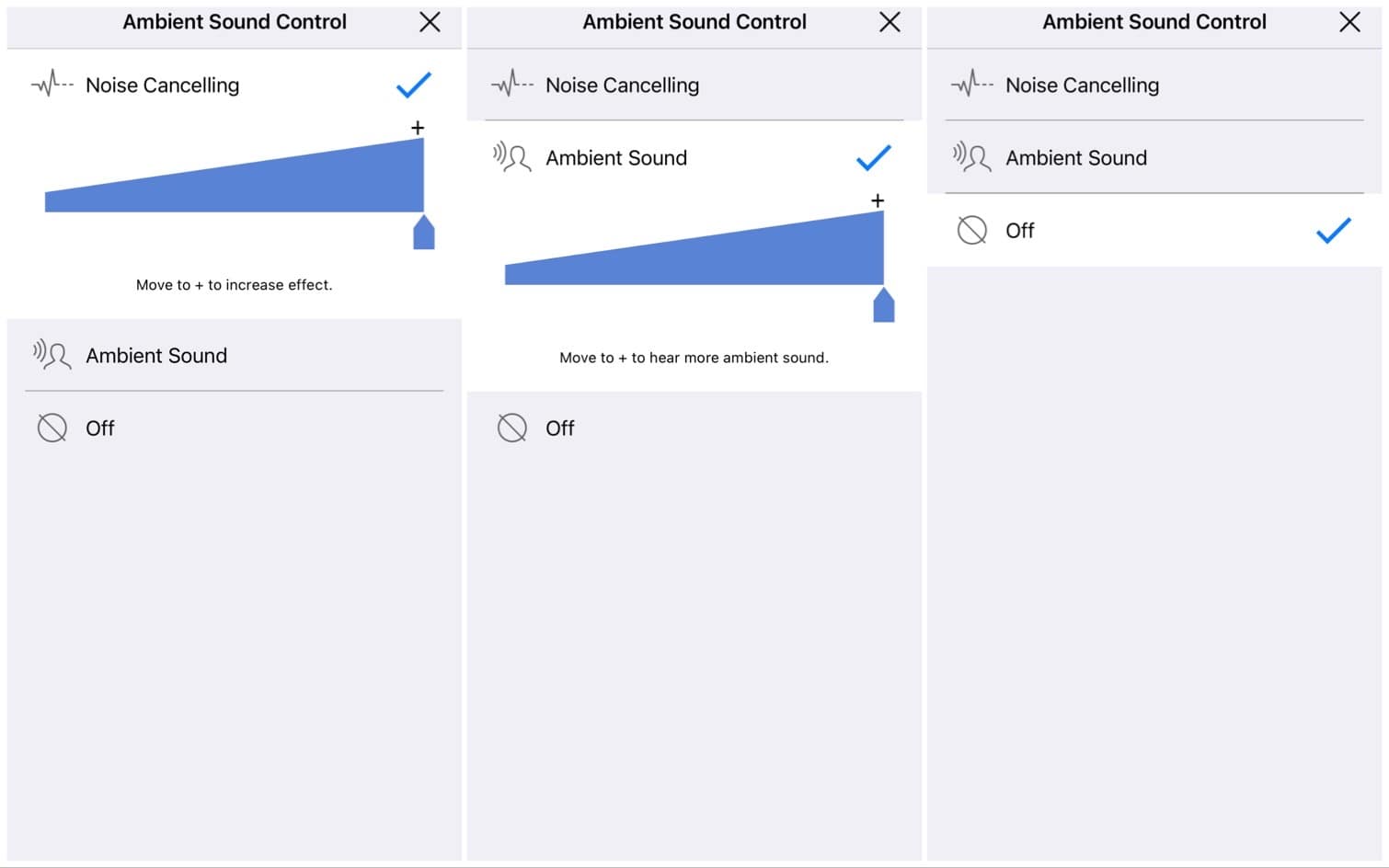 The battery life is also pretty capable, too, alongside that solid sound, likely thanks to those relatively large earphones.

You’ll find around 6 hours of battery life before a recharge, with an extra two charges in the earphone case, making for just under 20 hours of life from the Technics AZ70W.

That’s not too shabby at all, and is an admirable effort for noise cancelling battery life. 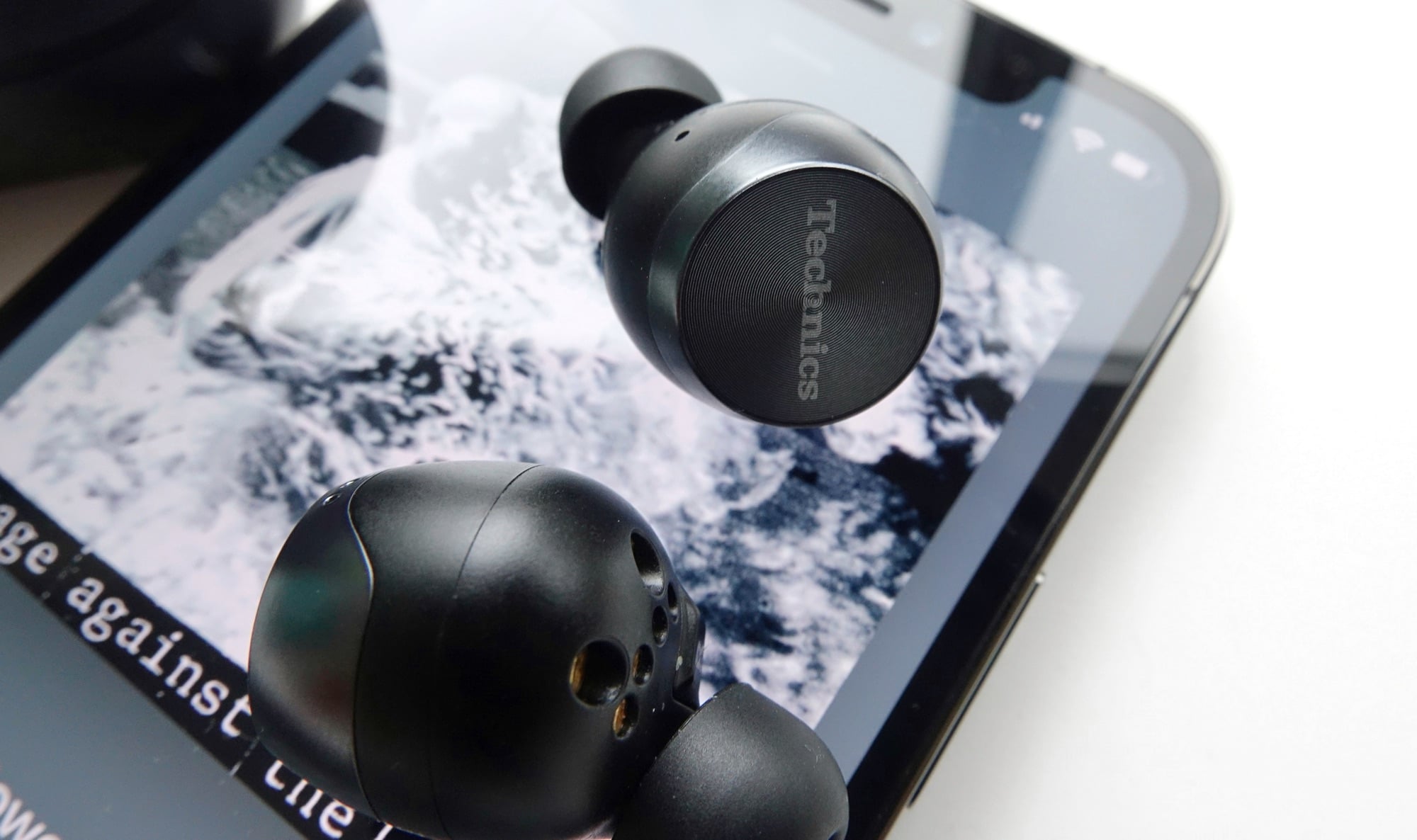 But while the battery and sound are things you could possibly fall in love with, the price is a little on the steep side. Granted, the sound quality is definitely up there and Technics is a fairly premium brand for Panasonic, but at $449, the Technics AZ70W aren’t what we’d call an inexpensive pair of wireless noise cancelling earphones.

At the $449 price tag, they’re above the excellent $399 Apple AirPods Pro, which arrives with a wireless charging case — the Technics AZ70W do not — while Sony’s also excellent WF-1000XM3 have reportedly moved from their previous $399 price tag to something below $300. Both of these are marginally better, and deliver better value, something we’re not quite sure Technics has hit.

Yes, you get great sound, but we’re not sure Technics has beaten the benchmarks here, and that makes the value just harder to agree with.

So what could be done to fix this?

Well for starters, we’d lower the price a little, and then increase some of the bass just enough so that the Technics AZ70W came across a little better overall. They’re solid, but they could be tweaked to be better.

To Technics’ credit, it includes a feature in the app settings to give you a little more bass EQ, but that’s hardly the same, and the natural sound of these earphones could be better overall.

A wireless charge case would easily help with the value, but that’s missing in action. Thankfully you get a great battery life, but we’d love the value to be more competitive overall. 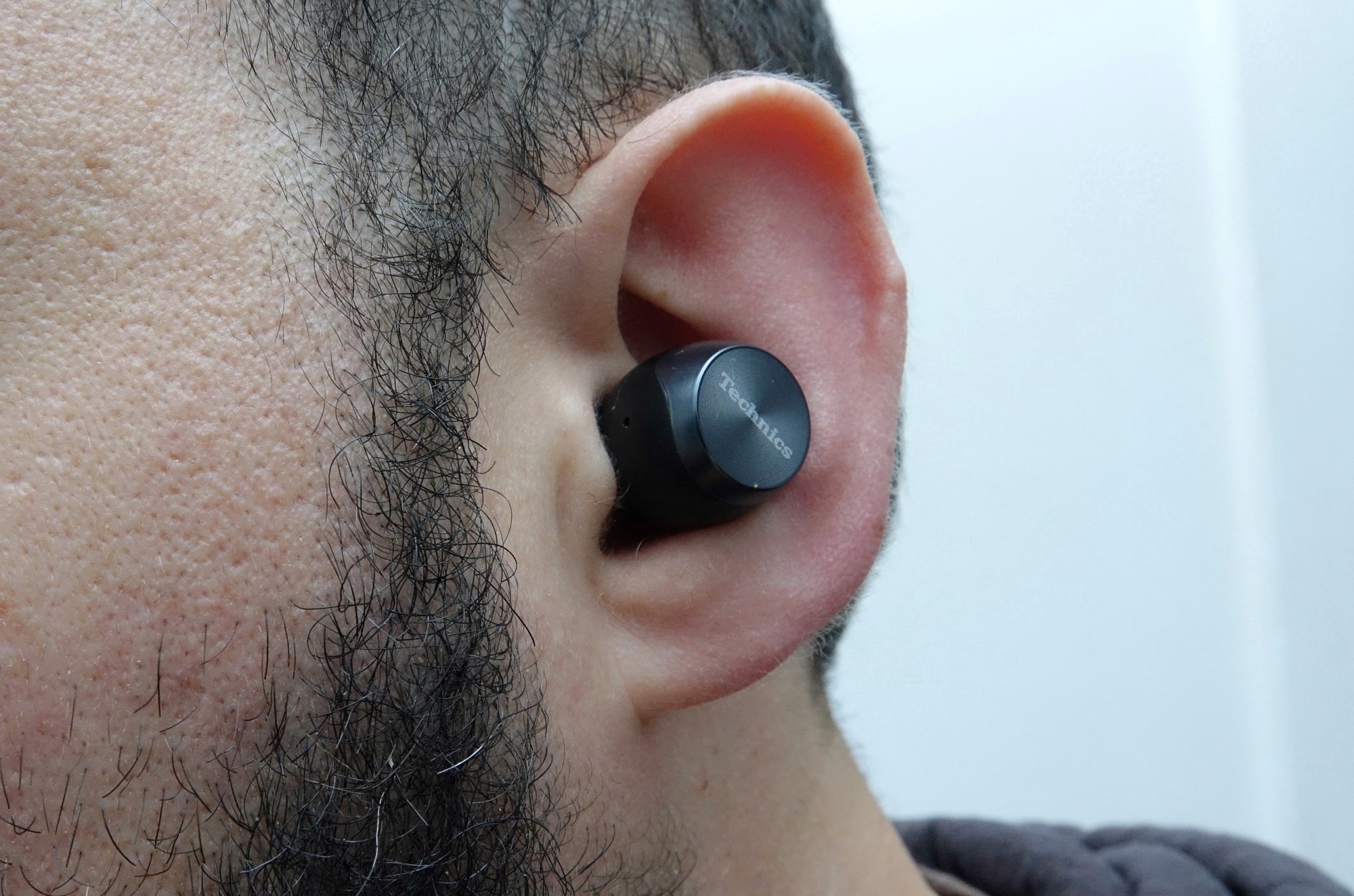 And finally, version two of these earphones would be even better if the larger earphone design was a little smaller overall.

Some people like bigger and more bulbous earphones, and the Technics AZ70W are definitely that: the earphones are more round and nestle into some ears comfier than others. 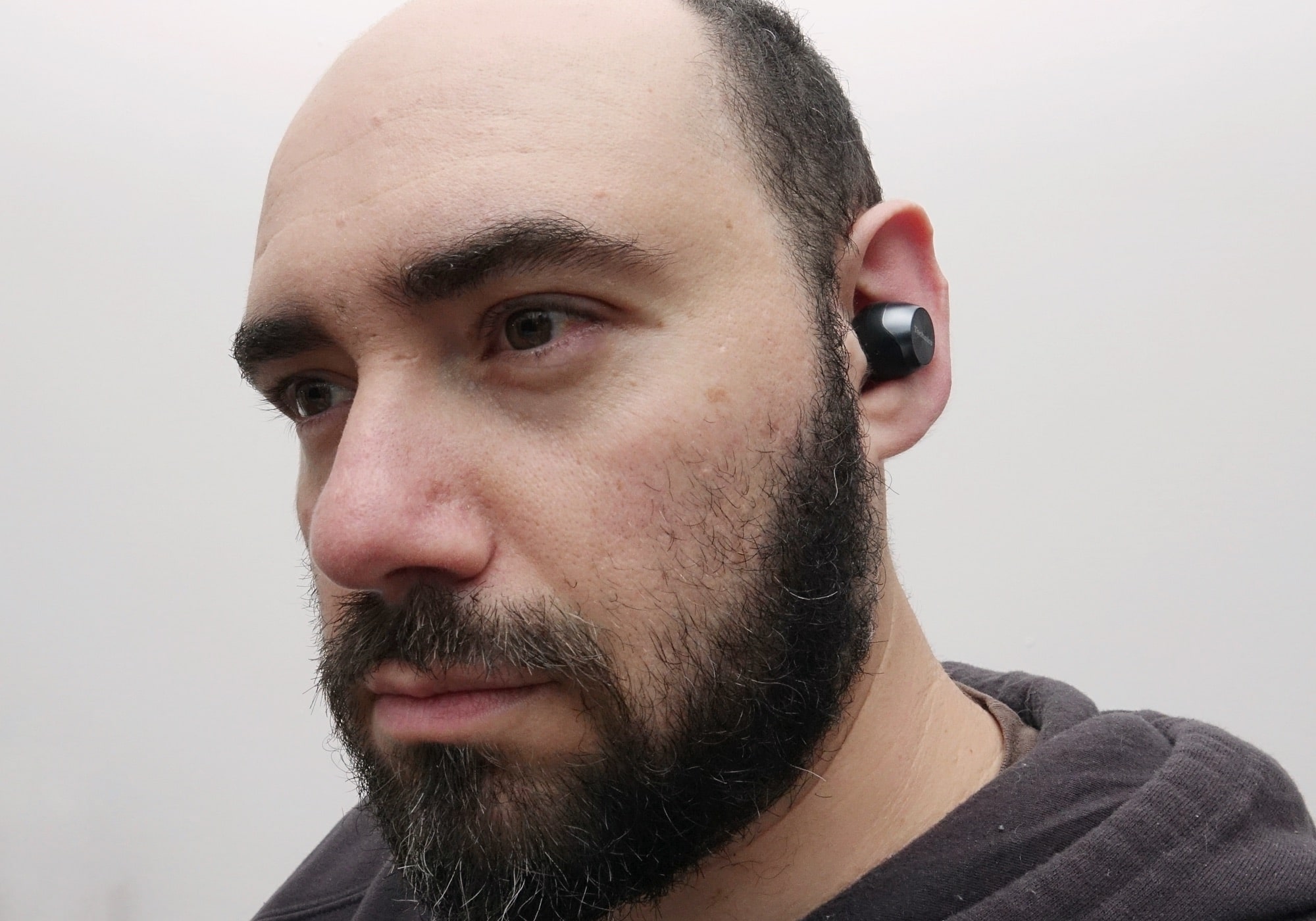 Essentially, Technics has kept the earpieces large while keeping the outside design smaller.

Rather than extend the earphones into a stalk like the Apple AirPods or use a design element that extrudes from the side like what Sony does, the AZ70W earphones just read as big, and while some will be fine with that, others won’t. How you fare will depend entirely upon what you like. 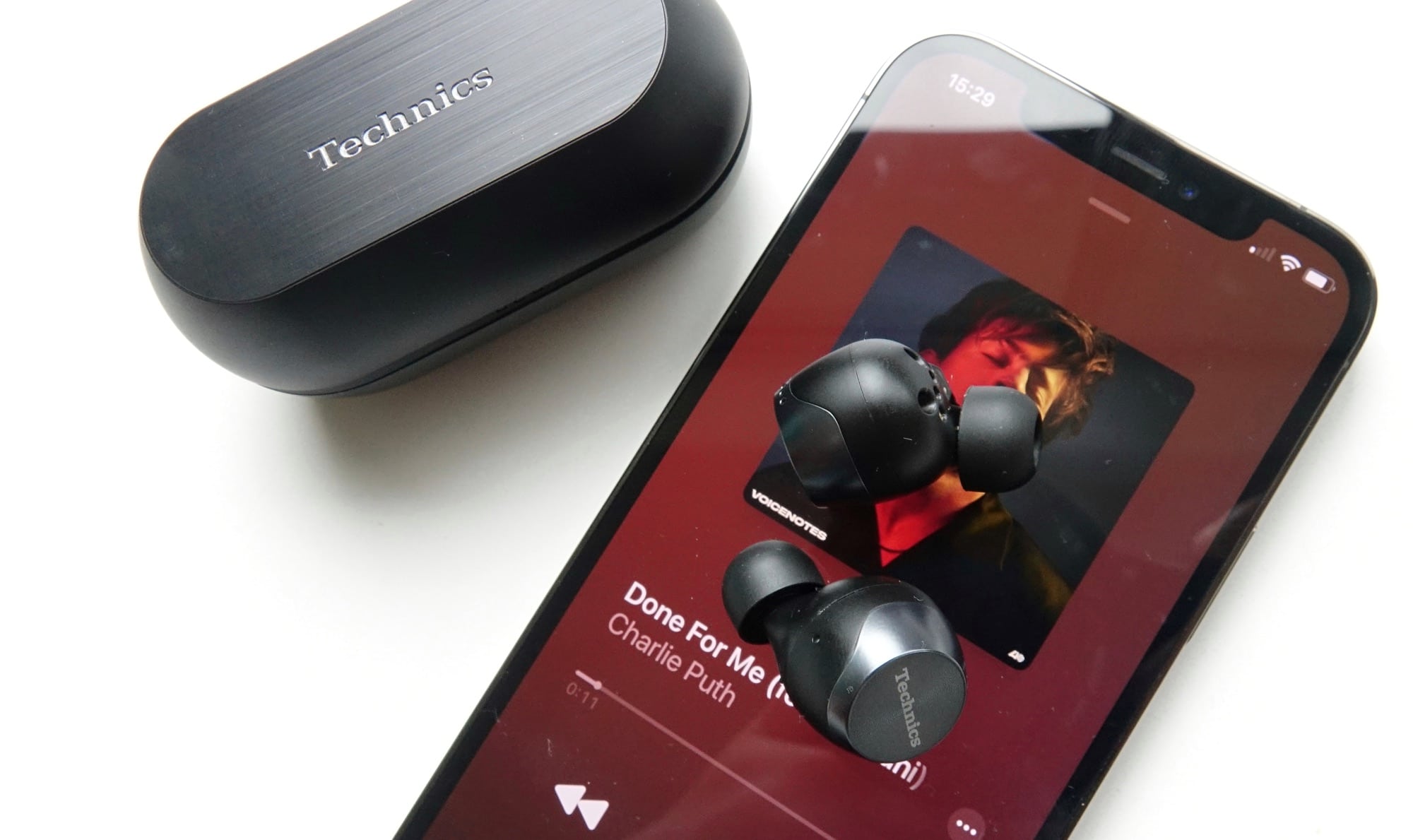 Delivering solid sound and battery life, Technics’ first truly wireless effort is better than we expected, and lives up to the Technics name. While they’re a little larger than we’d like and not all ears will happily accommodate the bulbous size of the Technics AZ70W, it’s a fantastic first effort, even if the price needs a bit of work.

Shop around a bit and these earphones could be an easy win for anyone looking for solid sound from a brand they have familiarity with. Recommended. 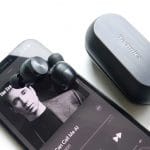