Realme entered Australia with well-priced phones, and its latest push aims to do something similar with earphones in the Buds Air, too.

These days, it’s not surprising to see phone makers do a little more than just phones. Manufacturers typically flex muscle in other areas, such as wearables including health bands and smart watches, possibly a scale, and of course, personal and portable audio.

Yes, the humble earphone is being addressed by phone makers these days, simply because it’s a logical addition to a release. We use our phones as media players these days, so what better way to extend that than with a pair of wireless earphones.

Realme is the latest to get into that world, and with the Buds Air, it’s showing that it, too, can make something like Apple’s famed AirPods. But making something like another popular product doesn’t always result in success, so can Realme recreate Apple’s success? 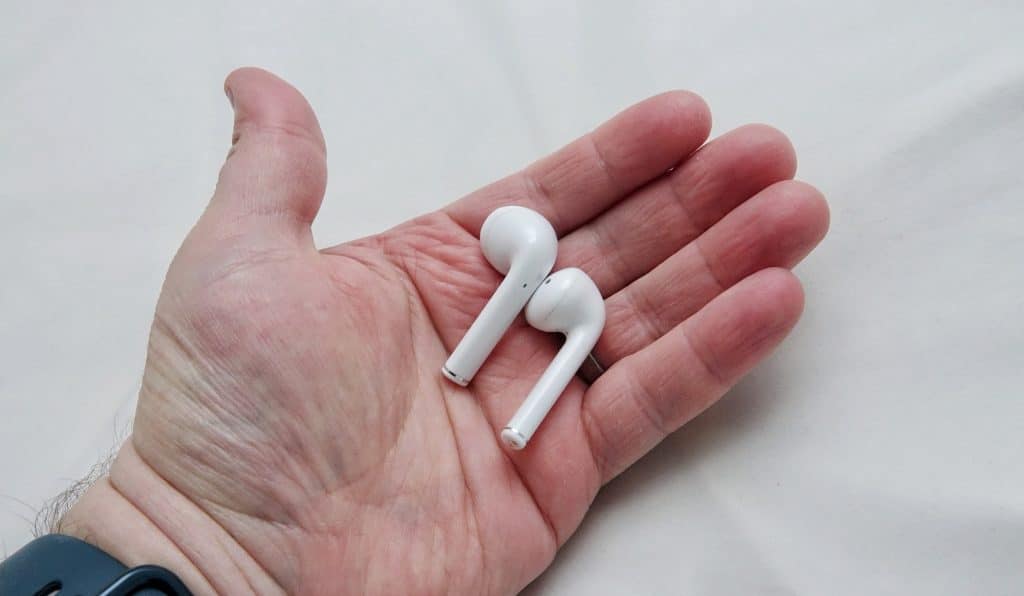 With a look taken right out of Apple’s playbook, you don’t have to look far to see what Realme used as inspiration for the Buds Air. While the carrying case is a little different, the buds themselves are basically as close as you can get to the Apple AirPods without actually being a pair.

There’s the same style of earbud head, the softened curvature flowing into a long stalk, and if that jargon doesn’t just say it, these are a neat likeness of the Apple AirPods, except made by Realme. We checked on that, too, as while there are numerous AirPods clones in the world, Realme has told Pickr the “Buds Air are designed, developed and manufactured by Realme, leveraging some components from trusted manufacturers”.

That makes them a Realme AirPod of sorts, and one that has controls on just below the earbud that occasionally work. You can double tap to pause or play music, triple tap to skip a song, and long press on both sides to go into a gaming mode to connect to game sound more quickly, though the controls aren’t always incredibly reliable. There’s also ear detection, which pauses and plays the music when they’re in your ear and near each other, a standard feature in this style of wireless earphone.

Perhaps the best aspect of the controls is with the Buds Air pairing, which on recent versions of Android merely requires you to hold them near a phone and have Android pick up on them. You can force the relationship, too, thanks to the button on the front of the charge case, and of course Apple’s iPhone works with the Realme Buds Air, too, thanks to that button being used to put the wireless earbuds in pairing mode.

That potentially gives all phone owners another choice in wireless earbuds that looks like an AirPod, which appears to be something people want. 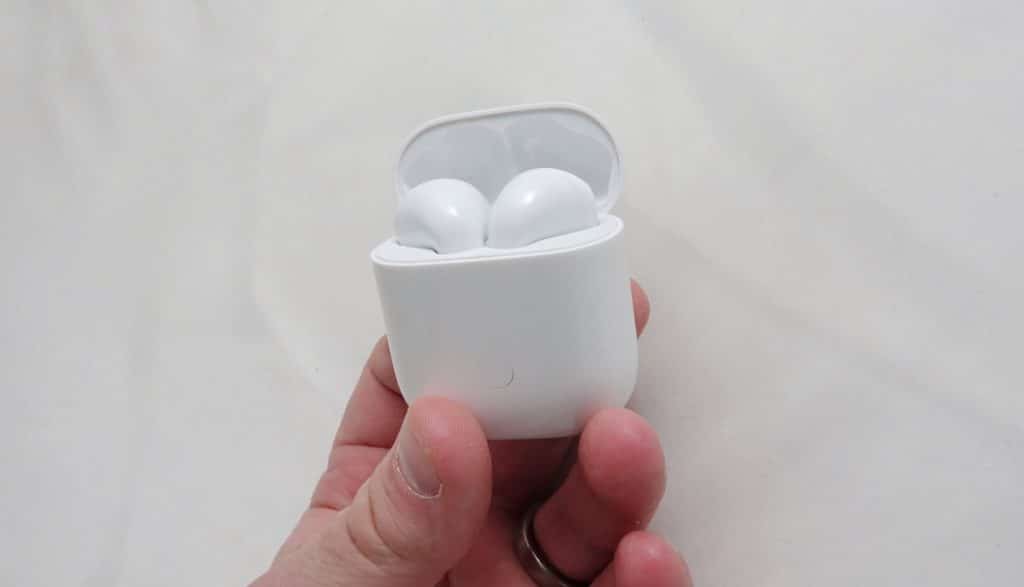 On the one hand, the Realme Buds Air definitely feel like the Apple AirPods, which is to say they’ll divide people in terms of comfort. We admire the sound of the AirPods, but we’ve never been huge fans of earbuds on the whole, and these follow the same concept: white stalk things that you rest in your ears for open audio.

Yet while the Realme Buds Air look like AirPods, they some how manage an even worse fit, often feeling like they’re going to fall out. The comfort here is definitely hit and miss, though if you like Apple’s EarPods or AirPods, you will have more chance of dealing with these. 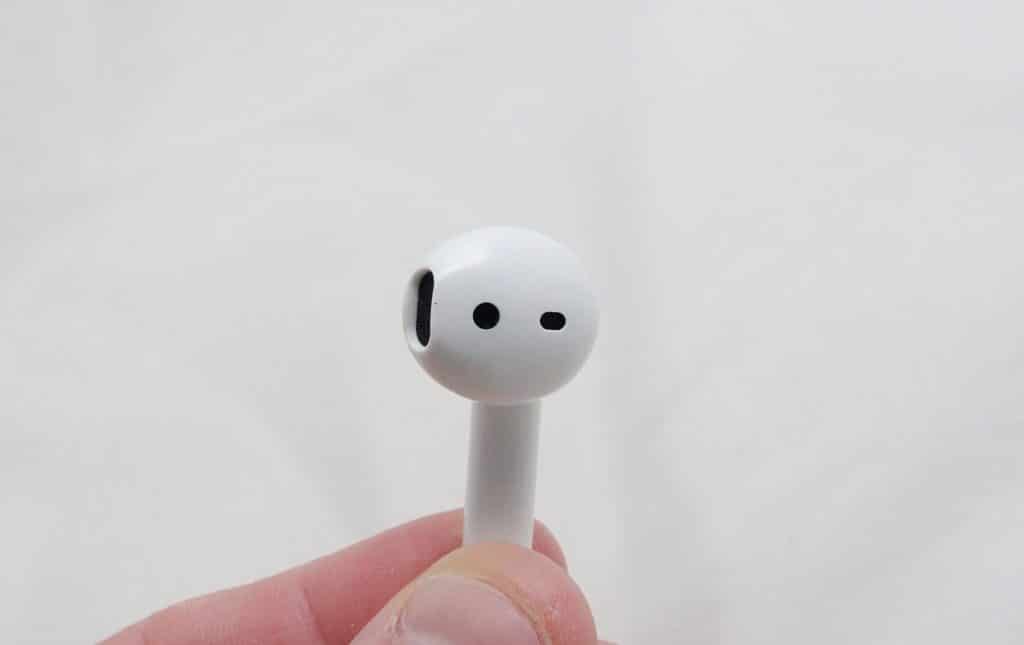 Looking like an AirPod doesn’t mean they’ll necessarily perform like them, and much like books, it’s best not to judge an earphone from its style. It is very easy to be misled in the audio world, and something that looks great might not perform just as well.

In the case of the Realme Buds Air, you may find the performance is close to what Apple delivers, though we found these earbuds suffer from a case of duality. Specifically, they sound acceptable most of the time, but if you really want a better handling of the song, you have to keep jamming them into your ears. Repeatedly. Over and over again. It’s less than ideal.

Testing the Realme Buds Air with the Pickr Sound Test, we found a sense of duality was required in order to test these earbuds. 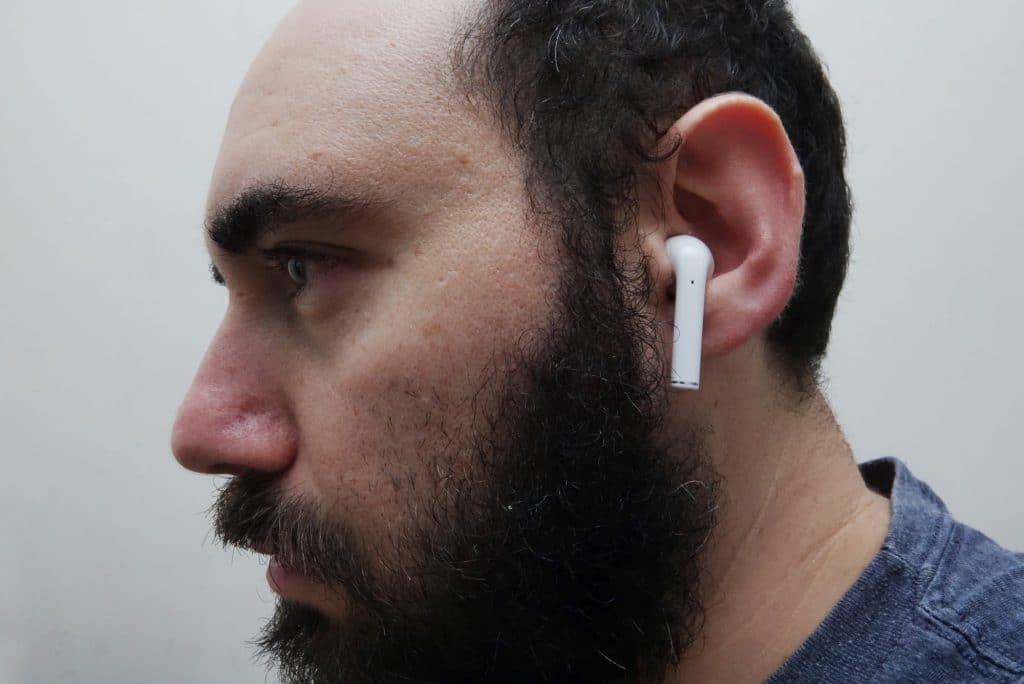 In the former, the result is acceptable, but not amazing. Trying to wear the Realme Buds Air can be trying at times, as they just don’t want to sit comfortably in the ears. This awkward design means you don’t get the full hit of sound, and the bass more or less disappears.

We missed the big bass drop on Tycho’s “Glider”, while Carly Rae Jepsen’s “Cut to the Feeling” had us cutting to a bright shiny sound that lacked impact and thud, a similar feeling on the soulful tracks from Ariana Grande and Mark Ronson, and even the rock from Muse. It was worse with the guttural sound from FKA Twigs’ “Two Weeks”, which was inconspicuously absent.

But then you jam them in your ear and aspects of the sound return. The bass is there, the impact is noticeable, and very shortly after, the Realme Buds Air go back to being bright and missing punch as the earbuds themselves start to pull away from your ears.

It’s not a fantastic effort, but it’s also not the worst we’ve heard for an AirPods clone, which is clearly what these are, and make no attempts to be anything remarkably different. Rather, they’re Realme’s AirPods, but not quite as good.

With the lack of bottom end most of the time, we found they were surprisingly usable for jazz and classical, thanks to the often less pronounced bassy bits, which made them more than capable for those musical styles. If, however, you prefer a little more punch and a sense of dynamics in your sound, you really need to jam these into your ears hard in order to get that back, and keep doing it, as they just fall out all too regularly. 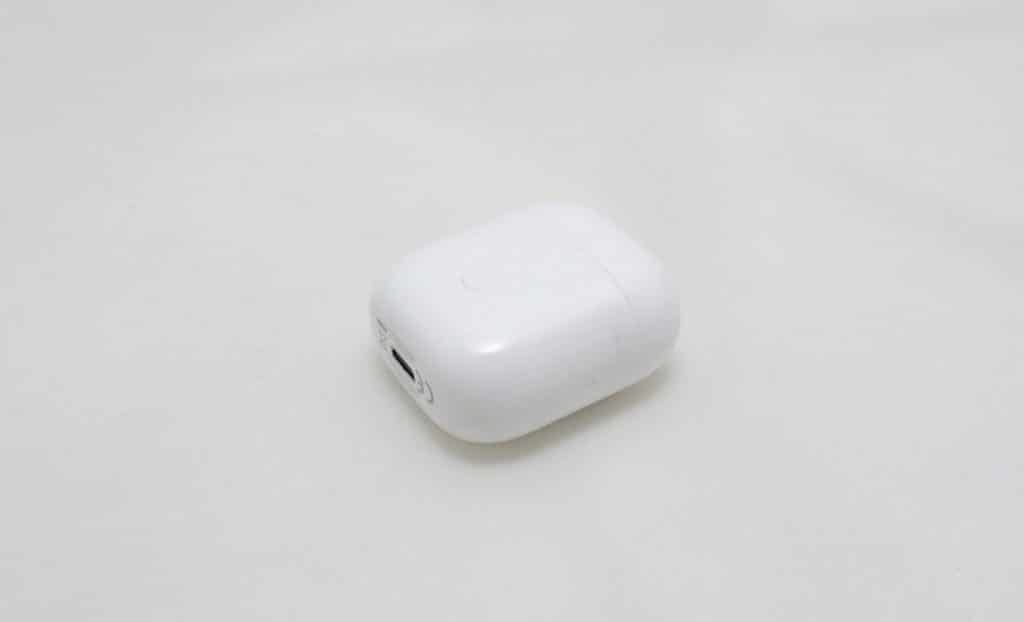 Alongside acceptable performance is acceptable battery life, though like the sound, hardly the best in the business.

You’ll get a maximum of three hours before needing to be thrown back in the charge box, which in turn provides an extra 14 hours or so of charges. It means you’re listening for a few hours at a time before needing a boost in battery, which in fairness is likely about all you’ll be able to deal with comfortably.

To Realme’s credit — and perhaps one of the only bonuses we’ve really liked — the Buds Air come in a wireless charging case, which is a nice touch. Given that costs extra for Apple and is still a rarity with other brands of earphones, it’s a nice inclusion, all things considered.

The value isn’t half bad, either, with the Realme Buds Air pitching a price of around $150, or just under it at $149. That’s more than the cheap-as-chips generic brand AirPods you can find at your local department store, for sure, but much less than what they’ve so obviously been inspired by, the $249 Apple AirPods.

It’s essentially a good hundred dollar difference between the models, which isn’t bad given the design and fit are both very similar.

While we’ve never been a huge fan of Apple’s standard AirPods — in contrast, we love the AirPods Pro — Apple’s version easily sounds better and comes off as marginally more comfortable. However if you prefer to save money and want the same style of wireless earbuds, we can definitely see the attraction with the Realme Buds Air.

Saying that, we’d suggest looking around, because if you can deal with a slightly different form factor, there are other options at a similar price point that may appeal, such as the BlueAnt Pump Air 2. 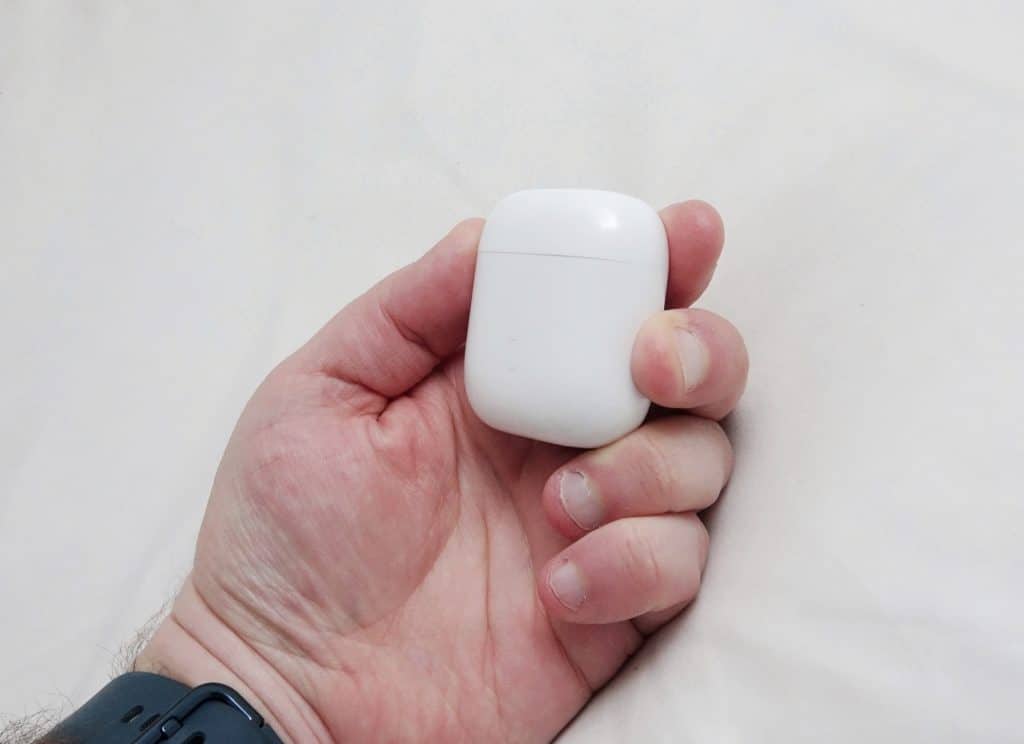 We’re suggesting alternates partially because while the value is there, the long term comfort doesn’t appear to be exclusive to the package.

Getting to the maximum run time on these earphones has been one of the most undesirable parts of being a reviewer, simply because they were not comfortable in the slightest. Again, we’ve not been huge fans of the standard AirPods, but even they didn’t feel quite this uncomfortable, and if we had to call out the Realme Buds Air design, it likely comes down to being larger. It’s not larger by a lot, but it seems to be noticeable, and pops right out of our ears after a few seconds, losing out on performance and comfort simultaneously.

Some people will be fine with this, but others won’t, and it affects sound performance as well, which is a problem.

When the Buds Air are sitting in your ear casually, you’ll miss out on most of the bass unless the tracks have been pumped up in such a way that borders on unnatural. Force them back in your ear (for however long they’ll stay), and the bass returns, though because of the amount of force needed, it’s hard not to call the Buds Air bright, as that’s primarily what they are.

As we’ve already mentioned, we suspect few will have a big problem with this, but due to the lack of comfort and design, it’s hard to recommend these except to anyone looking for a frugal AirPods clone. 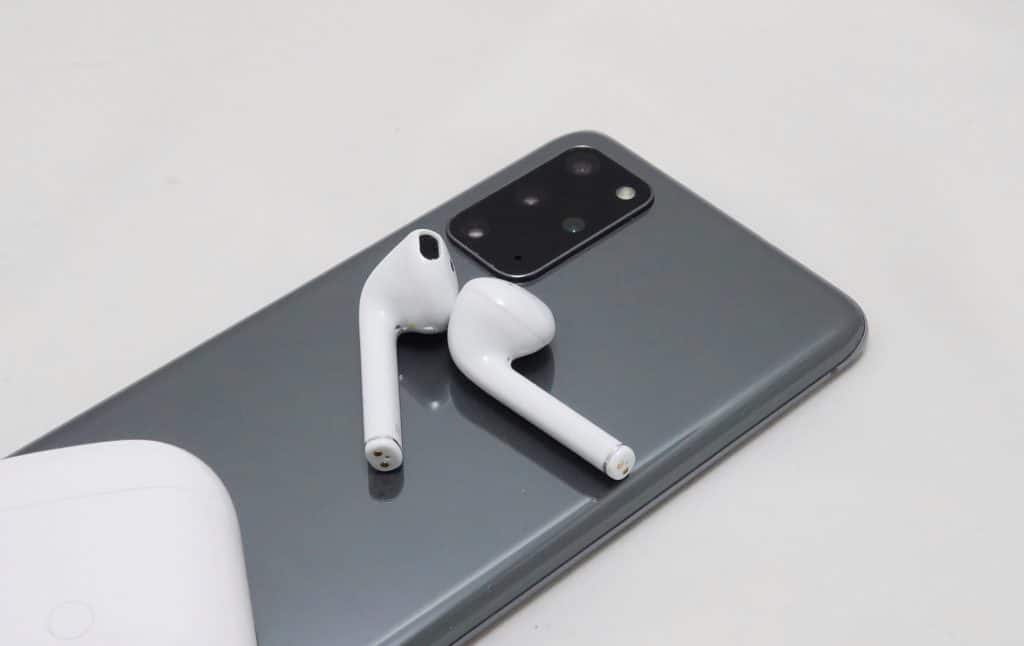 Realme isn’t known for audio, and after this release, we’re not really sure if that changes. The Buds Air are hardly fantastic, even if they are fantastically priced upon first glance, offering an AirPods style and wireless charging for less than what Apple charges.

But make no mistake, there are better options out there worth considering, with the only major draws here being the easy pairing, the wireless charging, and the price. If you rate wireless earphones on those factors, there’s something to like in the Buds Air. For everyone else, we’d probably move along. 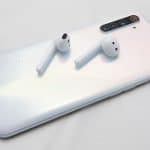 Realme Buds Air
Design
Features
Performance
Ease of use
Battery
Value
The good
A bright sound that some will like
Wireless charging
Easy pairing on Android
Fairly inexpensive
The not-so-good
Bass isn't there, unless you jam the earbuds in
Even jamming them in isn't guaranteed to leave them in your ear
Comfort isn't fantastic
Controls aren't always easy to trigger
3