Watching over your home is a literal bright idea when the Arlo Pro 3 Floodlight Camera keeps would-be intruders bathed in bright light.

It’s not hard to imagine why having a security camera is handy for the home, but with how many brands and models out on the market, it can be understandably difficult to pick which security camera you should get.

Between wired and wireless, weather-resistant and not, and then choosing an assortment of HD, Full HD, 2K, and 4K, you certainly have options. Some security cameras even go above and beyond the basic idea of what a security camera should be.

Security cameras in doorbells and cameras that can be activated in a smart display are just some of the options, as are cameras built into floodlights. The last option can act as a way to deter would-be intruders, but there are other uses, too, such as lighting a path near your driveway.

Arlo has recently entered this category, offering a curious take on its smart security camera system by encasing one of its 2K cameras in an LED floodlight, and it may well be the best Arlo you can find for outside your home. 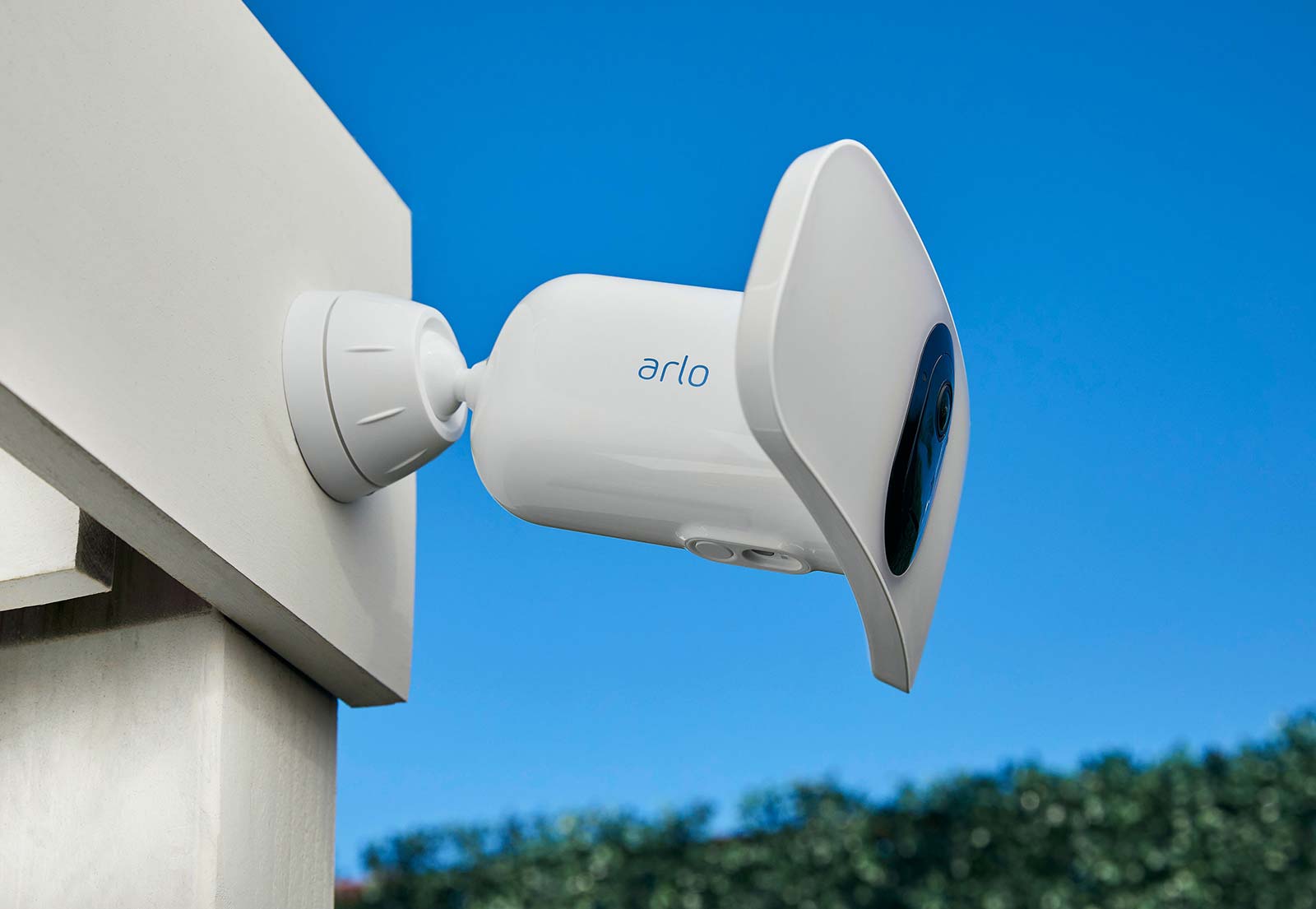 Like most of the other Arlo models, the Arlo Pro 3 Floodlight is a completely wire-free take on a security camera packing weather resistance, meaning it’s water resistant, so you don’t have to worry about whether it will survive the rain.

The camera relies on a 4 megapixel sensor to get this, and can use night vision via infrared lighting to see in the dark, sitting behind a 160 degree lens that offers a wide vision of what’s going on, because you’ll want to see what’s happening, of course. There’s also a microphone and a speaker, allowing you to talk to people through the speaker, just in case you want to engage without leaving the home.

All of this sits inside of that water resistant design with massive LED blocks flanking the camera on either side, capable of as much as 3000 lumens of bright white light.

The Arlo Pro 3 Floodlight comes with a battery and can be recharged in one of two places on the camera, either with the entire unit at the bottom using the supplied magnetic cable, or just using the inside block that is the camera and battery via a microUSB port.

Built to watch over homes and businesses, the Arlo Pro 3 Floodlight camera is a security camera that arrives with a fair amount of lighting to not just capture what goes on, but light it up with brightness. It is basically Arlo’s regular approach to security cameras, but with a wall of LEDs along for the ride, which is important because floodlights are supposed to shine a light in an effort to stop would-be intruders in their tracks.

Arlo’s take on the floodlight camera goes a step further by capturing video as the light is triggered, meaning you might just get an idea of whom has decided to wander onto your patch of the world as the light is telling them to go away.

Of course, you don’t have to use the Arlo Pro 3 Floodlight as a floodlight if you don’t want, and can turn the lighting down or even off. It could just be a very meaty security camera, which is basically what it is in daylight and the lights clearly have no reason to fire. That essentially makes it a solid security camera option, and may solve the need for having two devices: floodlight and security camera.

And that’s something we can really did. 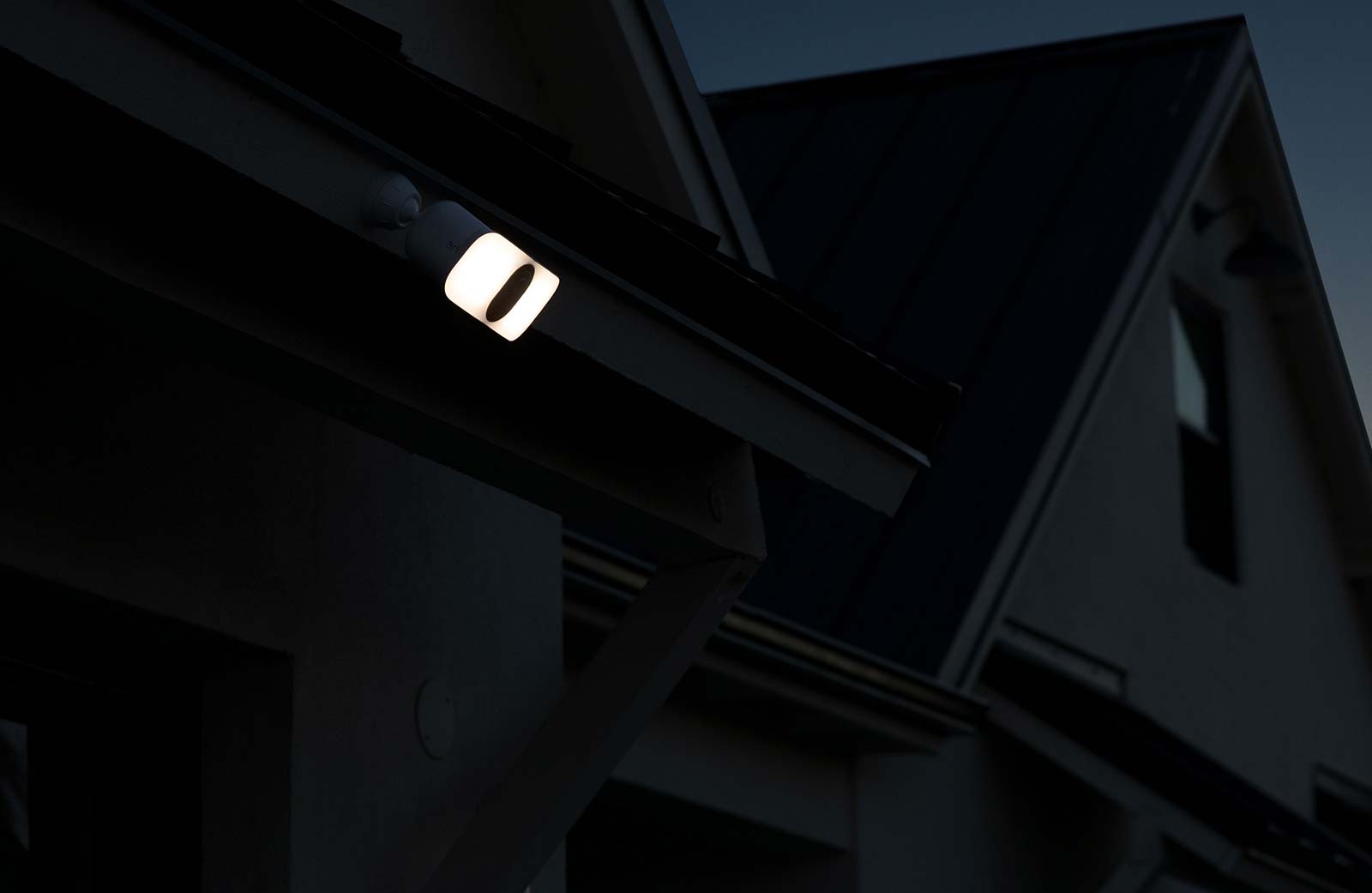 As a security camera, the Arlo Pro 3 Floodlight is a solid solution because of what it is: two really important devices in one great product. You can forget about the need for a floodlight AND a security camera because this thing has both in the same unit, and with support for live video and two-way communication, the Arlo Pro 3 Floodlight is also a door sentry, allowing you to talk to people without going outside.

Even when it’s raining, with the water resistance helping there, and a. little more durability, too. We accidentally had it fall from our mount at one point, and despite the Arlo Pro 3 Floodlight Camera falling from a good metre or two to stairs, and then down a few steps, the camera kept on doing its thing.

This camera is a real winner, and delivers the goods to folks intending to shine a light and capture situations they might be concerned about. It is both of those devices houses are commonly equipped with in a way that achieves a useful result.

With the security camera side, the Arlo Floodlight delivers both day and night, with a way of targeting when it fires thanks to zones. In terms of a floodlight, the camera definitely achieves that, able to throw a lot of brightness at a subject, but also able to tone down the brightness to a level that’s less of a blinding light and marginally more tolerable.

Even when the light is down, the light is still quite up, delivering a solid thwack of brightness enough to point out that, yes, we know you’re there, and if you turn it up, you can really properly stop someone with a glare not out of sight from having a giant torch punched in your face. All while the cameras are rolling.

But while Arlo has nailed much of the hardware, there are a few things we’d tweak, and one is that brightness.

Yes, it’s a floodlight system, which means it will typically be bright. And it is. The Arlo Floodlight Security Camera is very bright, but even when you turn down the brightness to its base level, it is still quite bright.

If you’re using the Arlo Floodlight for other purposes, such as lighting up stairs on your way into your home to help people navigate the dark, it might actually be too bright even on its lowest setting. It’s a level of LED control we’d actually Iike to see, either in a subsequent patch or a future model, because it would give the Arlo Floodlight Cameras the ability to be more, and to match the needs of the home.

Similarly, we’d love if you could change that LED colour. It’s a small issue, partly because it would be nice if Arlo adopted colour LEDs like it did on the Arlo Baby, but just one worth pointing out: these LEDs are meant to be bright and ward off intruders, but they’re also locked to a cold white look, and if you fancy a warmer white, no such luck, I’m afraid. 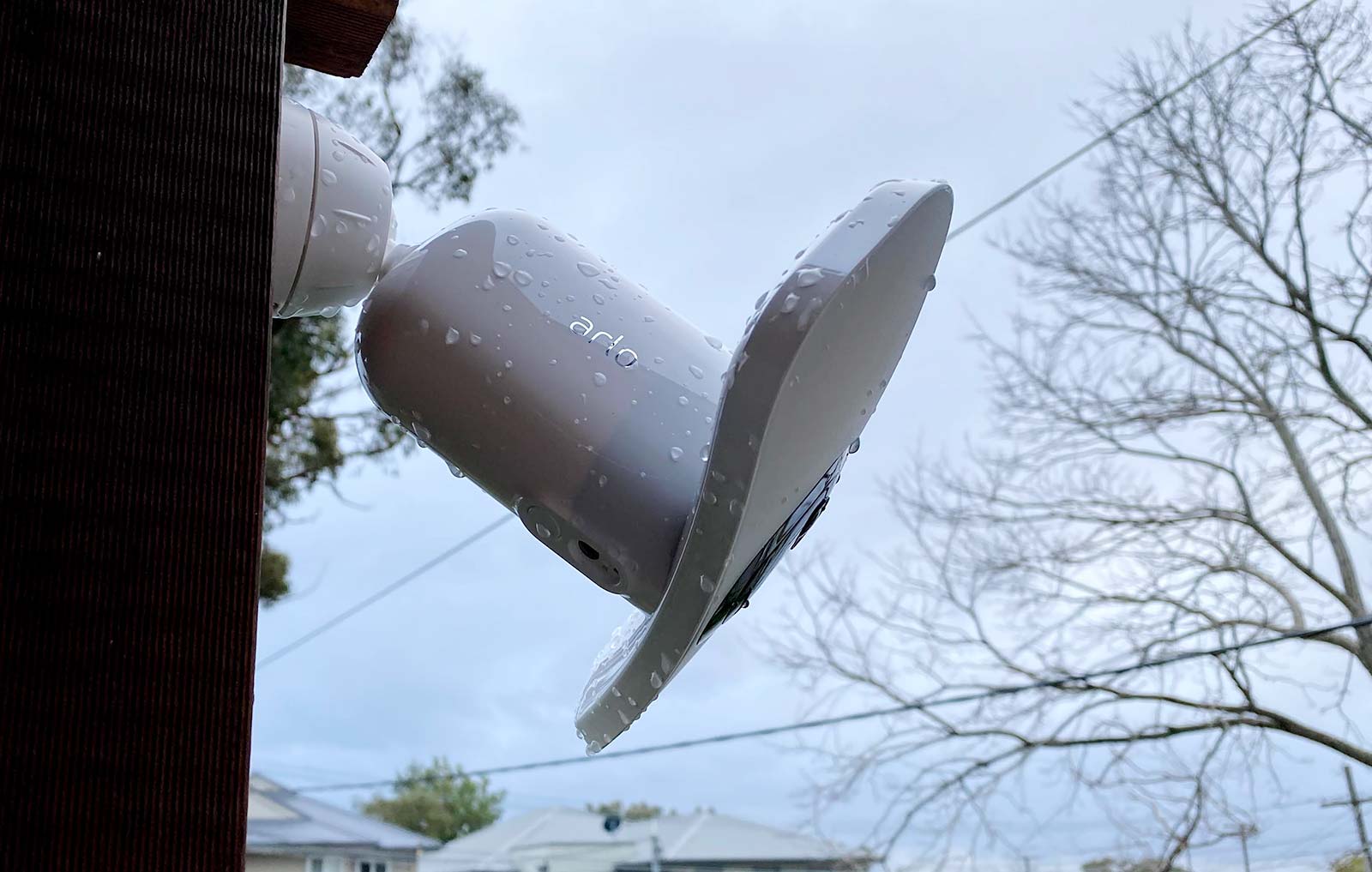 With a recommended retail price of $50 shy of $500 — and a street price of just under $400 — Arlo’s floodlight security camera feels like a pretty solid deal, getting two devices wrapped into the one.

It’s a more than capable floodlight, not that the requirements for that job are complex: floodlights typically just need a lot of bright lighting and a sensor, which this definitely fits the bill with. The fact that there’s a decent camera long for the ride solidifies the deal more so, as does the fact that the the Arlo Floodlight Camera is entirely rechargeable. 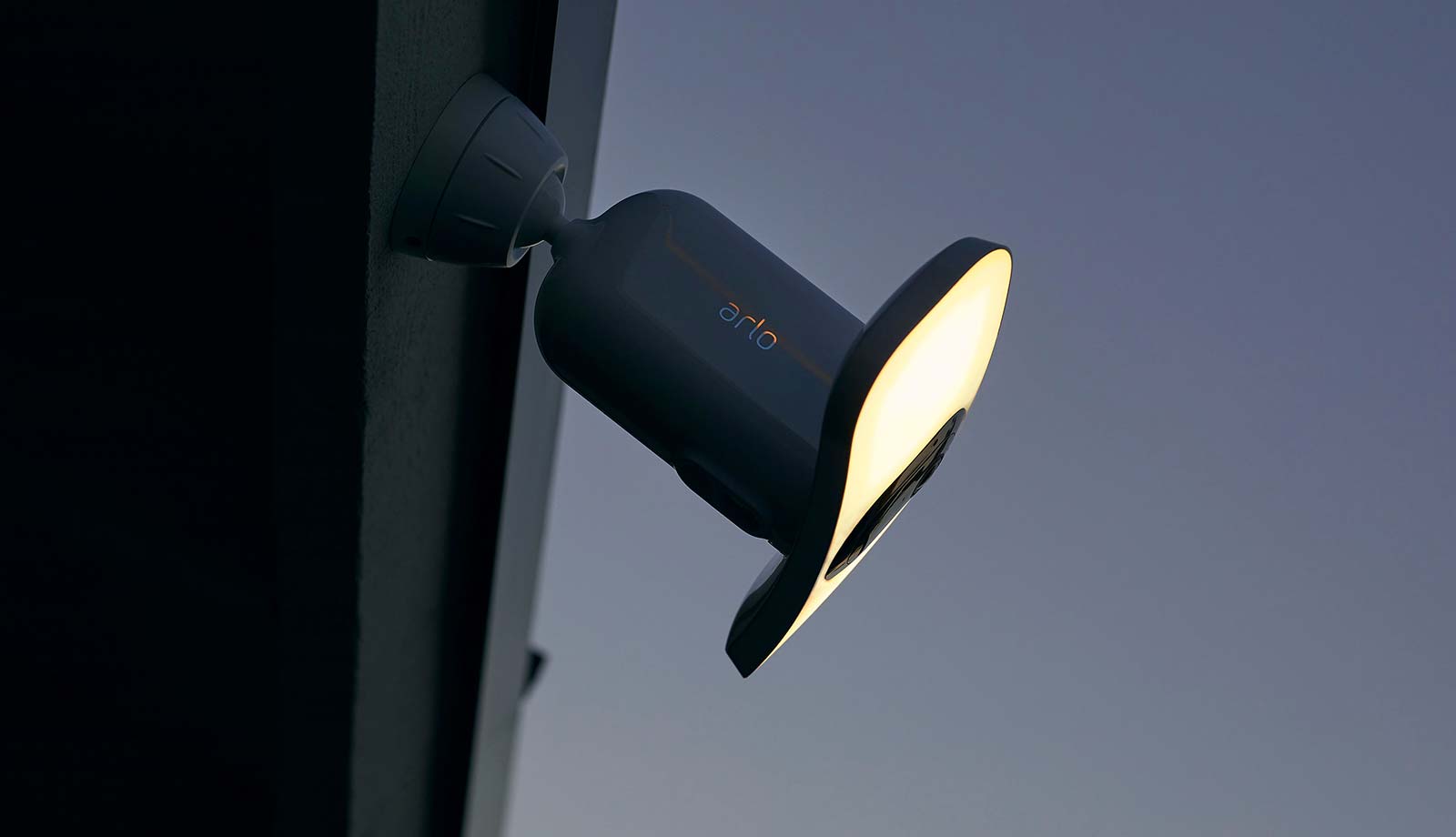 There’s also another factor working in Arlo’s favour here, and that’s compatibility: simply put, you don’t need to buy the hub used in the rest of the Arlo system here if you don’t want to, and it can work with your standard WiFi.

Without the Arlo hub, the camera performs fine and talks to the app, while the Arlo SmartHub may increase range while also allowing up to 4K resolution if you have Arlo 4K models in your life. However, removing the need to have Arlo’s base station and hubs means the Arlo Pro 3 Floodlight Security Camera is just that much easier for anyone to get into using.

And that’s something we can really sink our mitts into, because this is a great little security camera. While you may want to dig into the settings to get the most out of the camera, particularly if you want to turn off excess notifications from animals and such, the Arlo Pro 3 Floodlight is a solid addition to the home, standing watch over the outside in a way that’s sure to put your mind at ease. This is a top notch gadget, for sure. Highly recommended. 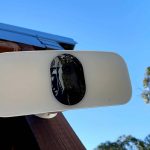 Arlo Pro 3 Floodlight Camera
The good
Really bright light is great for security
Supports 2K video
Works well at night
More durable than you'd expect
Weather resistant
Can be charged using either the whole unit or just a microUSB plug into the main section, leaving the mount in place
Doesn't necessarily need the Arlo Hub (though clearly works better with one)
The not-so-good
Even at its lowest setting, light is still really bright
Light colour can't be changed
4.5