First look: Amazon’s 2019 Kindle Oasis is easier on the eyes

A new day, a new Kindle, as Amazon embraces a warmer page colour that you can make cool with the slide of a finger.

Reading your books has changed over the years. Electronics readers and tablets have given us the ability to take more books with us on our travels, to pack them lighter, and to hold what is in essence a limitless supply of reading in something that typically weighs less than a paperback.

There will still be people that prefer the real physical book to the digital equivalent, but eReaders like the Kindle have certainly made a dent in the market.

Some of those reasons become obvious the moment you start using them, too. While the weight and storage is one of then, the screen type of an electronic reader is a passive screen technology that looks good in any light. It’s distinct from a tablet LCD screen because of that, and while they are typically only black and white, that’s all you really need for reading, so you don’t have to worry about colour washing out.

Over the years, there have been additions of front-lighting so you can ditch the external reading light, and waterproofing so you can read in the bath.

While you can do that with a real book — water damage on a book just needs to dry — having a device that also lets you sync your reading across the web and on other devices is definitely handy. You can read that same book from a Kindle in a pinch on your phone or computer if you had to.

And over the time they’ve been developed, screen makers are learning a lot about our eyes. They’ve learned, for instance, that white screens tend to emit a blue colour cast that may not be good for our eyes. It can be so annoying that it can affect your sleep, and so night modes in devices change the white balance of the screen to be warmer, adding yellow to make a screen easier to read.

If that sounds like the sort of thing an eReader could do with, that’s exactly what you’ll find in the 2019 Kindle Oasis, the new Kindle Oasis for the year and a minor change from the last iteration released back in 2017.

The big feature of the 2019 Kindle Oasis 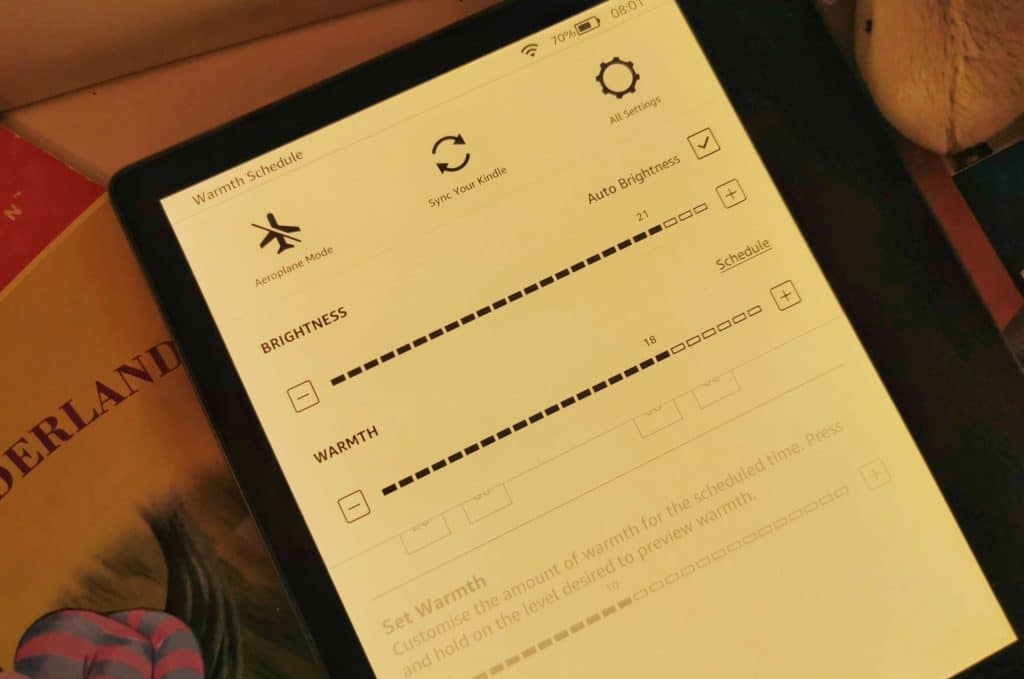 The focus on this new Kindle Oasis is that warm screen, because it gives it something else for your eyes to adjust to over the course of the day.

It’s not so much a warm screen as it as a warm control, and one that changes the colour of the front lighting technology from the blue-ish white light normally used in daylight to a warmer tone when it’s darker.

Testing the screen at night reading with the lights off in what is arguably as close to pitch black as possible, the screen was easier to look at with a yellow tinge. There’s no doubt about that.

We’ll typically switch a night mode on for other devices, and this concept has made night time reading easier, as the harsher white light doesn’t feel like it forces your eyes to adjust improperly. We definitely found it makes the Kindle easier on the eyes in our limited testing. 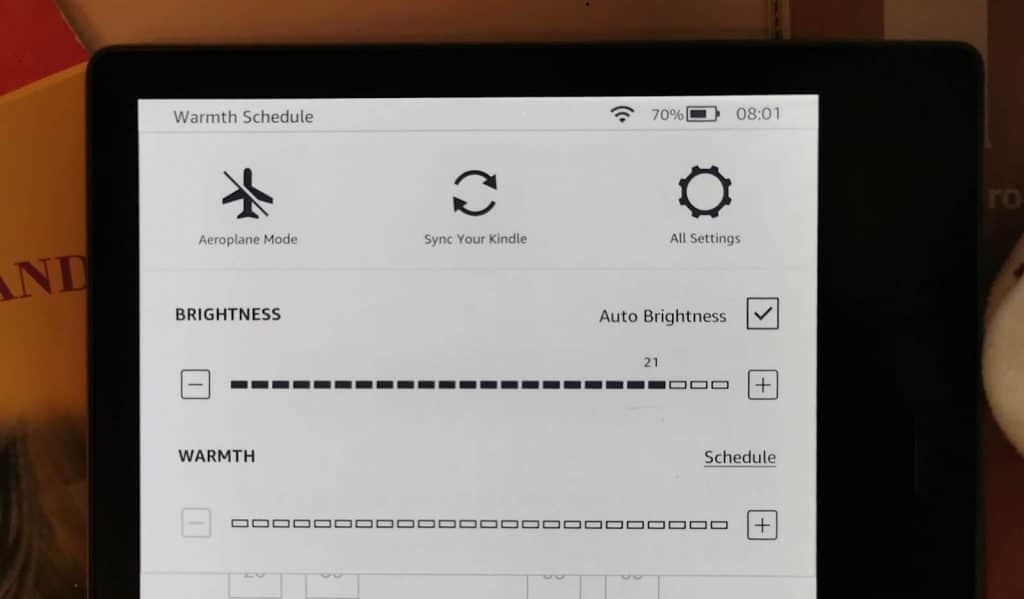 However there is a catch to this whole thing: while the brightness of the new Kindle Oasis can be set to automatic, the white balance and warmth of the screen cannot.

It means that Apple’s True Tone technology still has the edge, and is a white balance warming technology that automatically changes that warmth based on available lighting. You can find True Tone on the iPad Pro, the recent iPhone models, and both the new MacBook Air and MacBook Pro.

None of those devices are a true eBook reader, though. They can all read books, and can do so even with the Kindle app, but the screens are relatively bright by comparison.

The Kindle Oasis screen is more passive, and still feels closer to being a real book because of the electronic ink screen technology. The words and letters feel just that much closer to print, and now have a little more warmth to get by in reading at night. 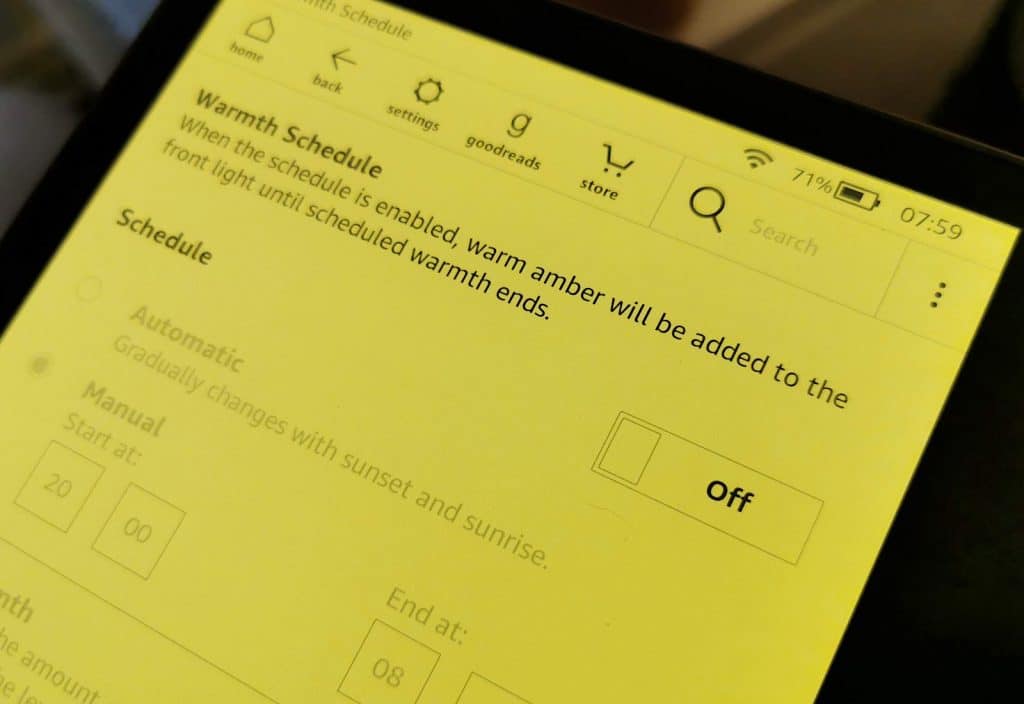 But because there’s no sensor like on the Apple True Tone screens to change that balance for you, there has to be another way to control things.

On the Kindle Oasis, it exists in two options: manual control or adopting a schedule.

The schedule is easy, and changes the warmth based on times, or sunrise and sunset. Essentially, when you get up and go to bed, the 2019 Kindle Oasis is at its warmest, and as you go through the day, it cools down to a cooler white.

Alternatively, there’s manual control, whereby just like on the brightness controller, you can slide along the 2019 Kindle Oasis touchscreen and turn the warmth up and down.

The 2019 Kindle Oasis on the whole

Outside of the warmer screen, good luck finding any real difference between it and the older Kindle Oasis.

It’s still thin, it’s still light, and it’s still waterproof at IPX8. It’s still controlled by touch, though like the old model, there’s a grip you can hold the Kindle Oasis by one either side and the screen will rotate for folks who grip the bind on the left side. There’s also support for Bluetooth headphones or speakers if you want to listen to audiobooks, as well.

For the most part, the all new Kindle Oasis for 2019 is the same 7 inch Kindle Oasis we knew last time, but it has a warmer screen and more differentiation to its recently updated Paperwhite cousin.

At $399, the 2019 Kindle Oasis clearly has the edge in features, supporting warm lighting, auto-adjusting brightness, water-resistance, a 300 pixel per inch (ppi) screen, and automatic orientation in a 7 inch size.

At $199, the Kindle Paperwhite is kind of like the Goldilocks of the range, with just enough of the tech from the Oasis to be amazing, but not all the premium features. There’s front-lighting with fewer LEDs, a similarly sharp screen 300ppi screen, IPX8 water resistance, and it doesn’t need to automatically rotate because the design doesn’t orient to one side over the other like it does on the Oasis.

About the only major change is the screen size being one inch smaller (6 inches), and automatic brightness and warmth controls, all of which cost $200 more in the Kindle Oasis.

There’s also the $139 standard Kindle, but at below $150, it’s the entry-level Kindle with a less sharp 167ppi 6 inch screen and no water resistance. Totally fine, but lacking the luxury of the other models.

Is it worthy of an upgrade? 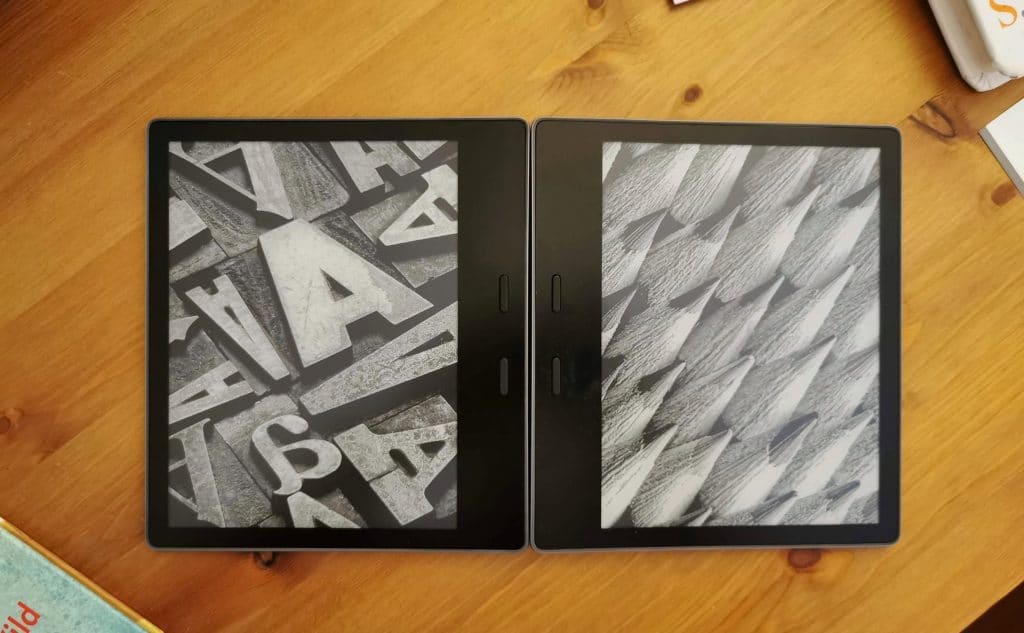 On the whole, every one of Amazon’s Kindle models offers something for readers, though it’s clear even from our short time with the 2019 Kindle Oasis, this new model offers the most.

However is it enough to get older Oasis and Voyage owners to upgrade to? That we’re not so sure of.

Reading in the dark is definitely more comfortable with a warmer screen, but Kindle owners have been reading in the dark with the front-lighting Paperwhite technology for long enough,so this may not warrant an update. In fact, you can turn down the lighting on a white front-light so that the screen isn’t so harsh if you need to, and we suspect that’s what other readers have been doing, as well.

If you’re buying a new Kindle and need to have the best, it’s pretty clear the $399 Kindle Oasis is still one of the best in the bunch, and offers a premium reading experience for where ever you go, but it’s not an upgrade path unless your Kindle breaks.

That’s one thing we’ve learned about Kindles, too: they take a lot of a beating. You might still be using a first-gen with the keyboard, or a recent smaller and lighter model from the past few years with Paperwhite.

Kindles keep going, much like the books they come from, and if you find yourself moving to the 2019 Kindle Oasis in the near future, those handy upgrades could benefit your eyes just that little bit more, as and when you need them, of course.