iPhone owners armed (get it?) with an Apple Watch are about to get more in the way of health tracking, plus some new styles to kit out their wearable.

Alongside the launch of a new MacBook Air model and M2 chip inside, Apple is focusing its 2022 Worldwide Developers Conference on arms, or more specifically wrists, and what we can all expect to do with them.

That’s been very much the norm for a few years now, and alongside the typical assortment of iOS, iPadOS, and macOS, releases of Apple’s watchOS have been heralded at WWDC, with this year no different. However, in version nine of the wearable operating system, the focus is very much on health tracking, plus some customisation to make your watch even more yours.

First there’s what’s happening in health, with the watchOS Workout app getting an update to let you jump between views to see different measurements and metrics, while also being able to use the app to check out the measurements of your heart rate over a workout.

It’s not just going to add features to those actively working out, but also doing other activities, too.

The new operating system will also track running measurements differently, supporting running stride length and how much your torso moves as you run in a vertical oscillation measurement.

Apple is also featuring a metric for cardiovascular health, measuring your recovery time after a walk, run, or hiking workout, showing it as a Cardio Recovery.

Meanwhile, swimmers will be able to use the sensors in the watch to classify a stroke and work out a score for how long it takes to swim one length of the pool with those strokes.

When it comes time to rest, watchOS 9 will use the sensors to track more than just sleep and awake time, evolving to track REM and deep sleep, with heart rate and respiratory information also recorded alongside.

And if you regularly take medications, there’s an app coming that will let you create a medication list with scheduled reminders, checking off when you take your meds, as if Apple’s Watch was your nurse. 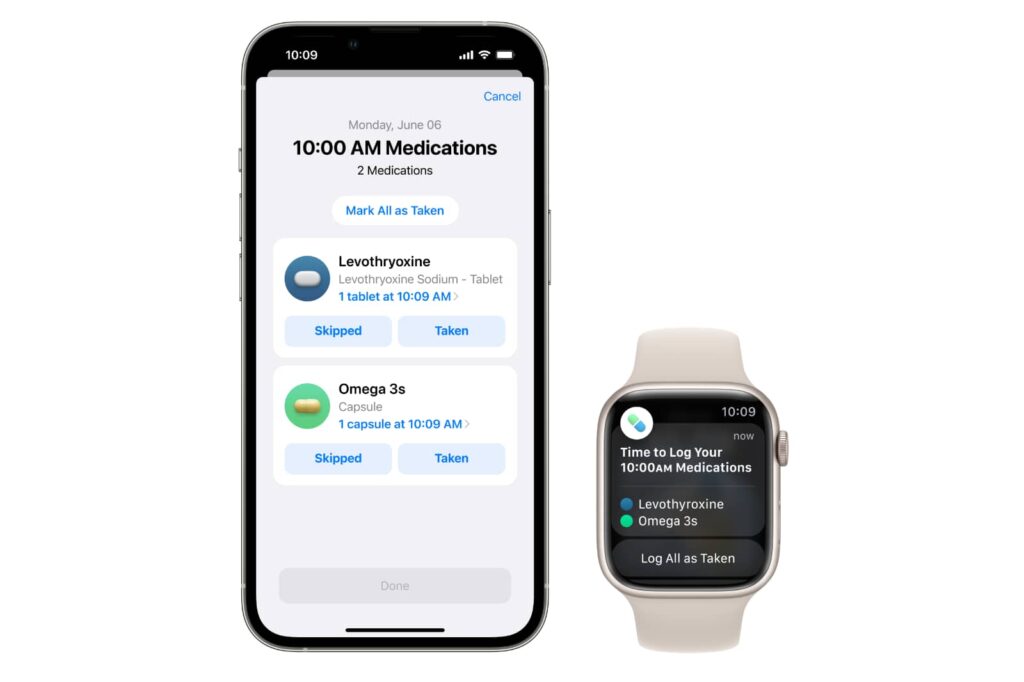 Beyond the world of health, watchOS 9 appears ready to make you look your best, with more emphasis on the ways you can share your wrist in unique ways.

While the first generations of the Apple Watch lacked diversity in watch faces, several generations in that has changed, and you’ll find a few more ticking around in V9, with three added to the list plus one remaster.

New to the watchOS watch world incudes “Lunar” which shows several calendar types on one face, “Metropolitan” with different type that changes when the Digital Crown on the side is rotated, and “Playtime” which is a piece of art made with artist Joi Fulton. Apple will also offer a newly remastered face, “Astronomy”, which offers a star map and cloud data for your area.

Alongside those watch faces, you can expect more editing for the current crop of watch faces, more complications, while the “Portraits” watch face can pick up on the depth in animals and landscapes, throwing the text of a clock in the background behind the foreground of the main subject.

“Users around the world love Apple Watch for helping them stay connected to those they love, be more active throughout the day and better manage their health,” said Jeff Williams, Chief Operating Officer at Apple.

“Later this year, watchOS 9 takes the Apple Watch experience to the next level with scientifically validated insights across fitness, sleep and heart health, while providing users more creative ways to make their Apple Watch their own,” he said.

As to when watchOS will come to your wrist, developers expect it today in beta, while a public beta looks set to arrive next month for people who don’t mind living dangerously with the odd bug here and there. Meanwhile, everyone else might want to wait until September or October, which is typically when we see a new Apple Watch, usually alongside the launch of a new iPhone.

WatchOS 9 will need an Apple Watch Series 4 or later, though, so if you have anything pre-dating that such as a Series 3 Apple Watch, it might be time to consider an upgrade.