The world of noise cancelling earphones has a little more competition from Samsung this week, as the Galaxy Buds go “pro”.

It’s been a busy week, what with CES 2021 and all, but that doesn’t mean it’s over, nor does it mean that everything announced this week has to do with CES. Rather, the work week is ending with a bit of phone news, and not just of the smartphone variety.

Alongside its announcement of trio of new phones in the Galaxy range, Samsung also has a new pair of earphones coming out, and it’s pretty clear what they’re targeting.

Called the Galaxy Buds Pro, they’re Samsung’s latest pair of Galaxy Buds earphones, after the Galaxy Buds Live last year that looked a whole lot like beans you store in your ear. In this generation, the Buds Pro, Samsung is taking a deliberately more earphone approach to its design, while delivering active noise cancellation (ANC) and support for 3D sound, two things we’ve not seen Samsung really dabble with in the past.

The new earphones are a little shinier than you might expect, but include an 11 millimetre woofer and a 6.5mm tweeter inside, complete with three microphones, all on each ear, allowing the active noise cancellation technology to work to deliver background noise cancellation, as well as ambient sound amplification and control depending on the setting you select.

That continues what Samsung did in the Buds Live, though back then it was noise cancellation applied to ambient sound, a feature we’re seeing in earphones lately to let you hear through them, picking up on sounds that you might want to divert your attention for, such as someone speaking to you.

According to Samsung, the ANC technology in the Buds Pro is a little smarter — an “Intelligent ANC” — and will optimise the noise cancellation and ambient sound to work with each other, recognising when you’re talking and dealing with the sound of the outside world by either amplifying or quelling it.

They’re also water resistant, sporting the IPX7 rating, and Samsung says they can even automatically jump from one Samsung device to another, such as how Apple earphones intend to work with Apple devices. 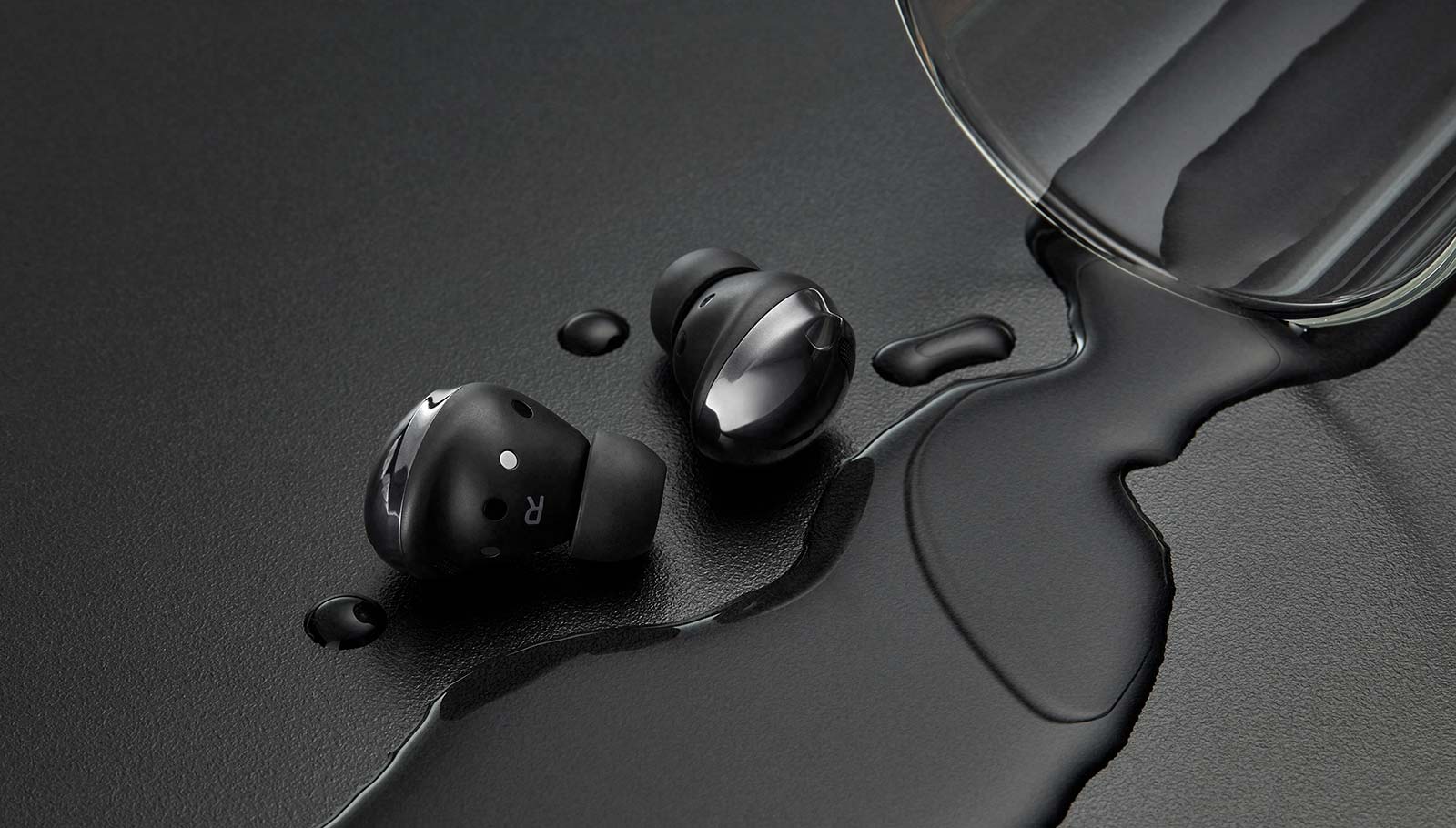 Interestingly, Samsung is saying that its Galaxy Buds Pro also support a degree of 360 sound, using Dolby Head Tracking to let you hear sound from different angles, which is more like how iOS 14’s Spatial Audio works, and less like how Sony 360 Reality Audio works.

At least the battery life promises to be interesting, with up to eight hours of battery life without ANC, and around five with ANC, plus either 20 hours or 13 hours more in the case dependent on whether you’re not using cancellation or are, with Qi wireless charging built in the case, as well.

“Our goal is to offer a true wireless earbuds option for everyone, no matter their needs or style – and we’re excited to unveil our Galaxy Buds Pro,” he said.

They’ll also be priced a little under where Apple pitches its excellent $399 AirPods Pro, which seems like the deliberate target, even though there are other noise cancelling earphones out there, including one of our consistent picks, the Sony WF-1000XM3, which tends to be compared against the AirPods Pro. As such, Samsung says its Galaxy Buds Pro will see release in Australia from January 16 for $349 in three colours.