Samsung isn’t waiting long to launch its answer to a 2021 phone, with three variations of the Galaxy S21, one of which supports the S Pen.

It’s a new year, and that means new phones are on the way. We typically have to wait until the new phone season to launch, usually around February when Mobile World Congress is on, but 2021 might be a little special, because everything has changed.

CES this year was virtual, and while there was no Mobile World Congress last year, our bet is that MWC will be virtual, too, with no one likely to jump on a plane for Spain until this whole pandemic is kicked. Thanks, coronavirus.

So that means everything is a little different, and we wouldn’t be surprised to see smartphone makers get their mobiles in earlier to convince people to make the jump.

That might be where Samsung comes in, which is marking the end of CES 2021 to announce its new line of Galaxy phones, updating the Galaxy S20 range from 2020. This year, there are three, as the Galaxy S20 becomes the Galaxy S21, a handy name given the year we’ve all jumped over to.

First up, there are three models, two of which are very similar save for the size. 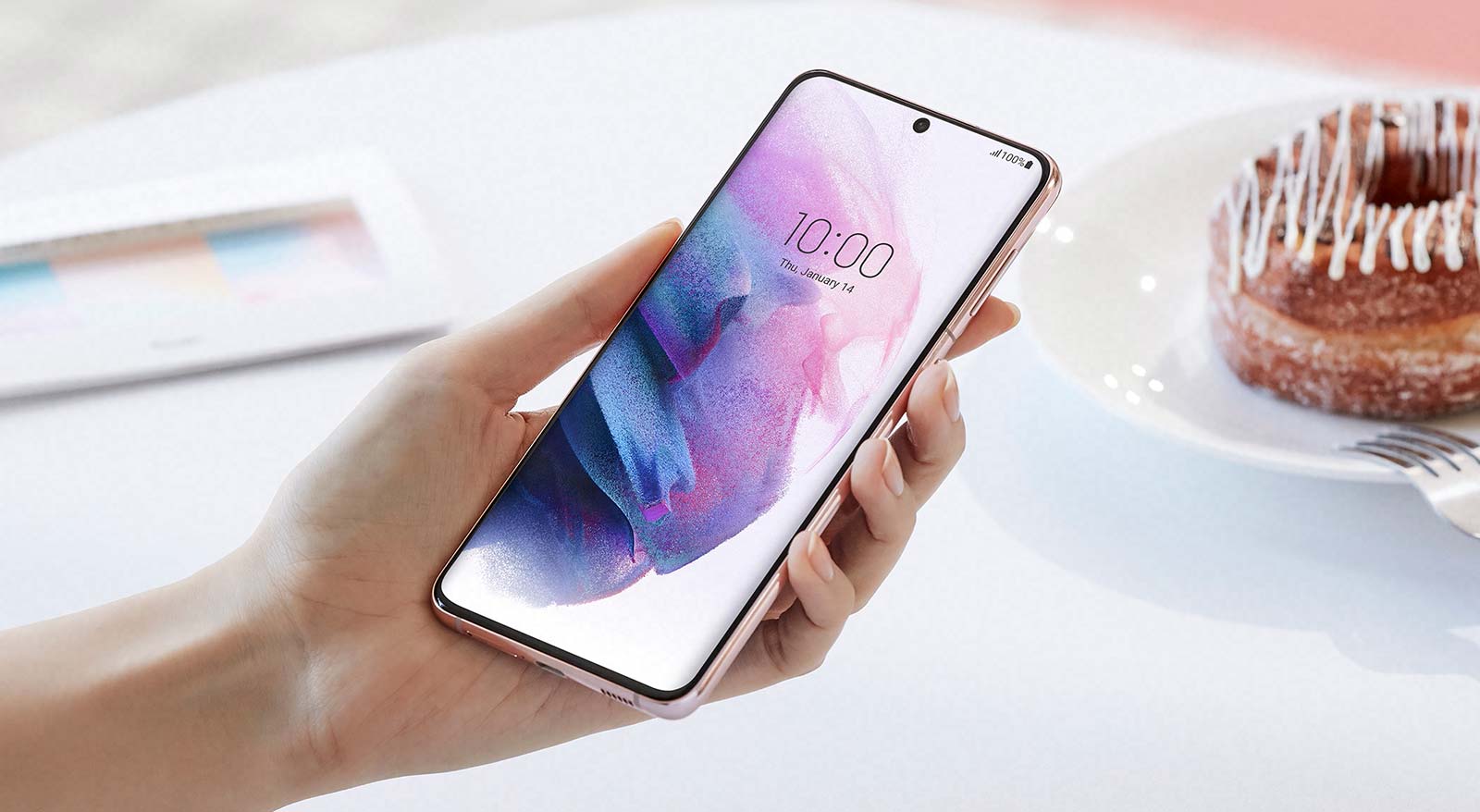 Each screen is a Dynamic AMOLED capable of bright and vivid colour, and each supports a Full HD+ resolution of 2400×1080 and an adaptive refresh rate, capable of running between 48 and 120Hz dependent on the activity. Refresh rate switching is still relatively new on phones, but the idea is this: apps that yearn for a bit of smooth interaction such as games will switch to the faster refresh rate, while apps that don’t can drop the refresh rate down to save battery life.

Inside the Australian phones, Samsung is opting for the Exynos 2100 that got launched this week, supporting 5G on its connections, as well as Bluetooth, GPS, Near-Field Communication for Google Pay (NFC), Magnetic Stripe Technology for Samsung Pay (MST), plus the latest take on WiFi 6E, which is backwards compatible across 802.11a/b/g/n/ac/ax. Each has 8GB RAM with either 128GB or 256GB storage, and each gets much the same look. 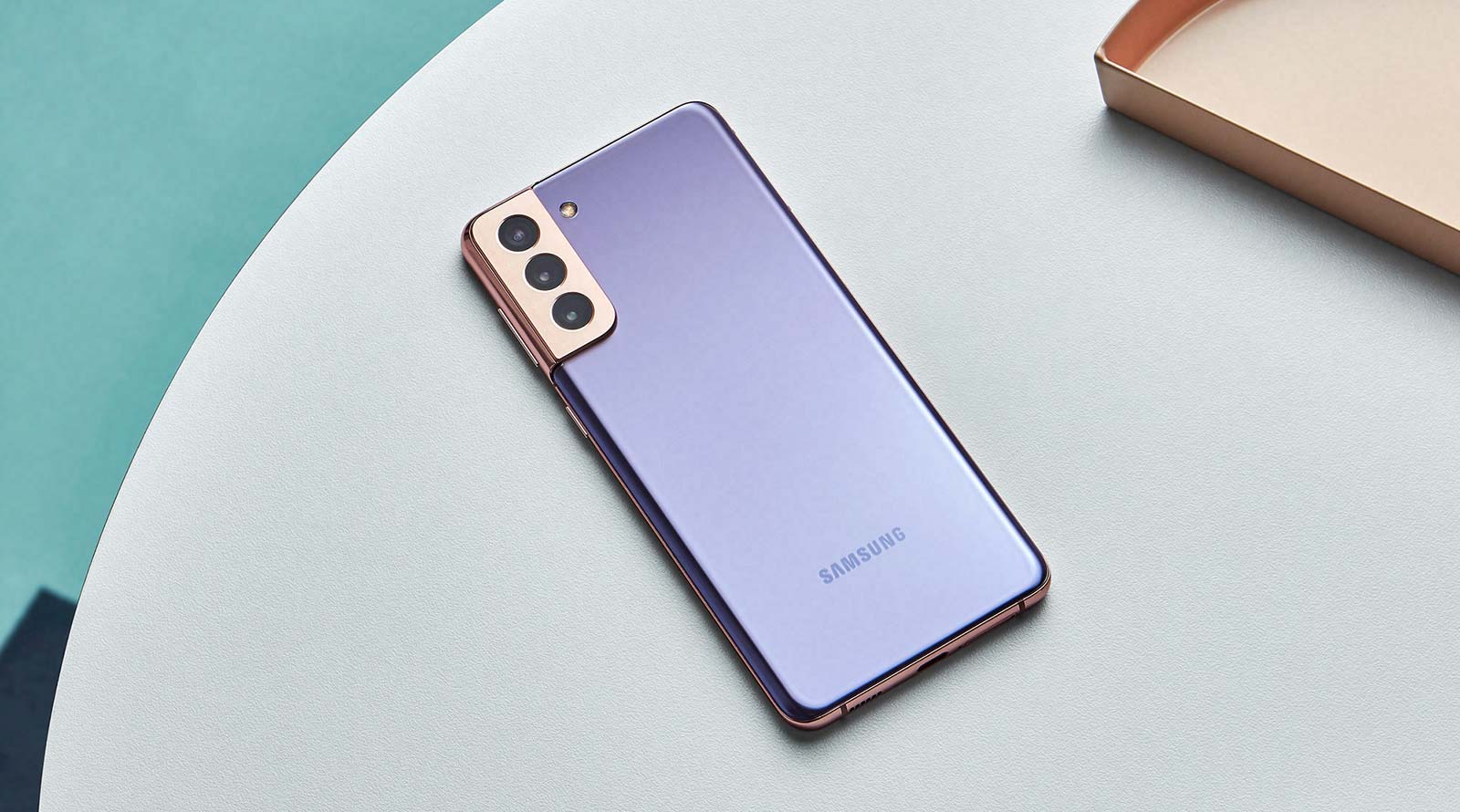 Even the cameras are the same, with a 10 megapixel front facing camera, while the back sports a 12 megapixel F1.8 standard wide camera, a 12 megapixel F2.2 ultra-wide, and a 64 megapixel 3x telephoto set to F2.0. There’s even 8K video support across these.

Each phone is made from glass and metal, and each phone supports a water resistant rating of IP68. However the specs only tell part of the story.

With a slightly different design basically showcasing an all-screen approach save for a dot where the camera is in the middle, and the back loading the camera in an almost traffic-light configuration surrounded by a block, Samsung is going for an approach that clearly isn’t an iPhone.

It’s hoping the camera impresses, too, with some interesting features along for the ride. 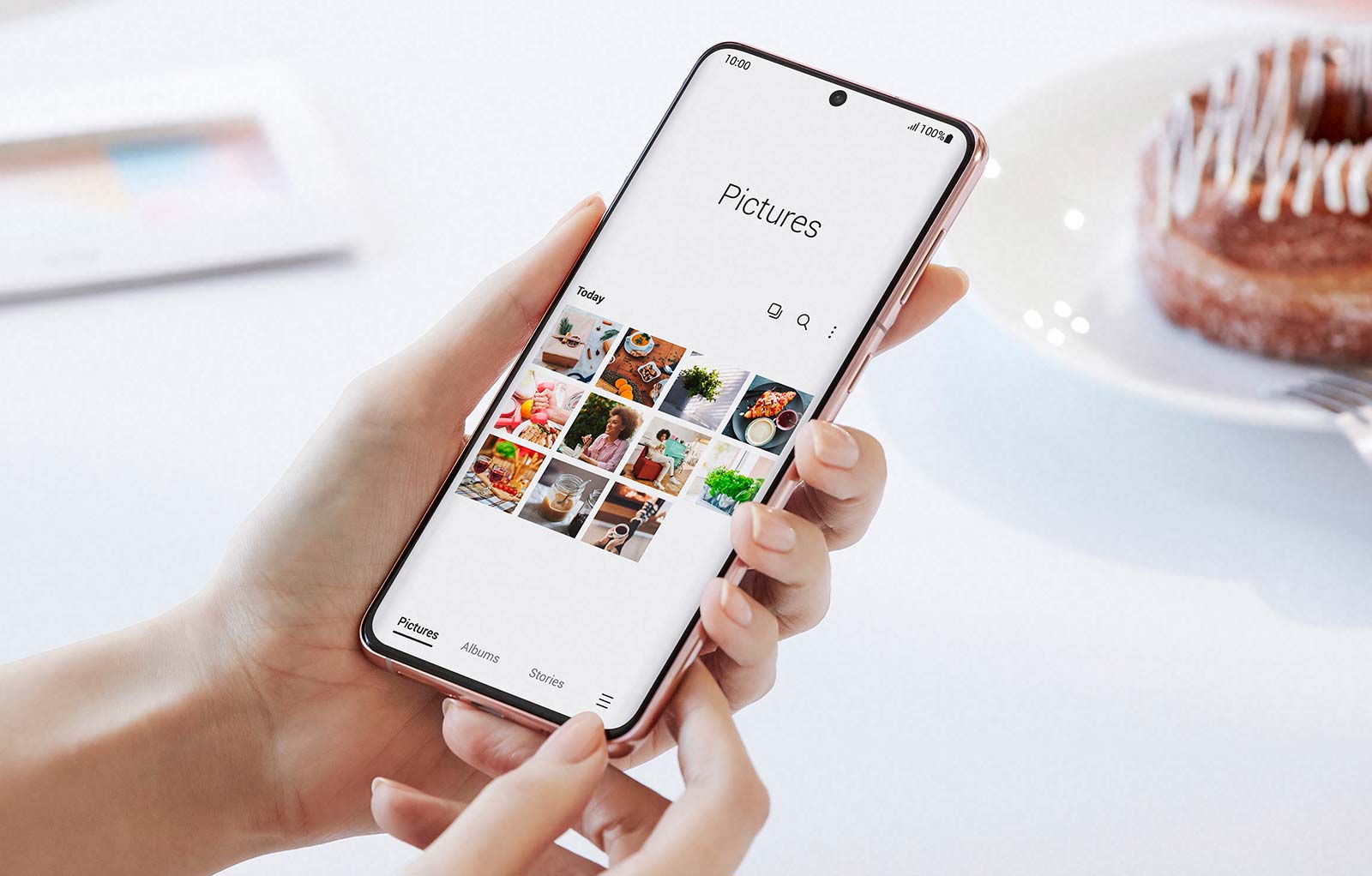 You’ll find a way for you to jump between the cameras on the phone, giving you director control in video and capturing between all the cameras with the “Director’s View” feature, while Samsung’s Portrait Mode sounds like it has replaced the strangely named Live Focus of previous models, using 3D analysis and AI to work out the background and improve the separation in the shot.

The zoom technology “Space Zoom” is back, giving you some AI to help you lock onto subjects with a pixelated zoom (for all the good that will do), and there’s an “8K Snap” feature to let you take images out of 8K video you capture, because that’s supported on the phone, too. Samsung will even support multiple microphones for capture, allowing you to use wireless earphones on its Galaxy Buds Pro to pick up on voice.

There are other features here and there, but the real attention might be on the third Galaxy, the Galaxy S21 Ultra.

What is the Galaxy S21 Ultra, and how does it differ from the other S21 models? 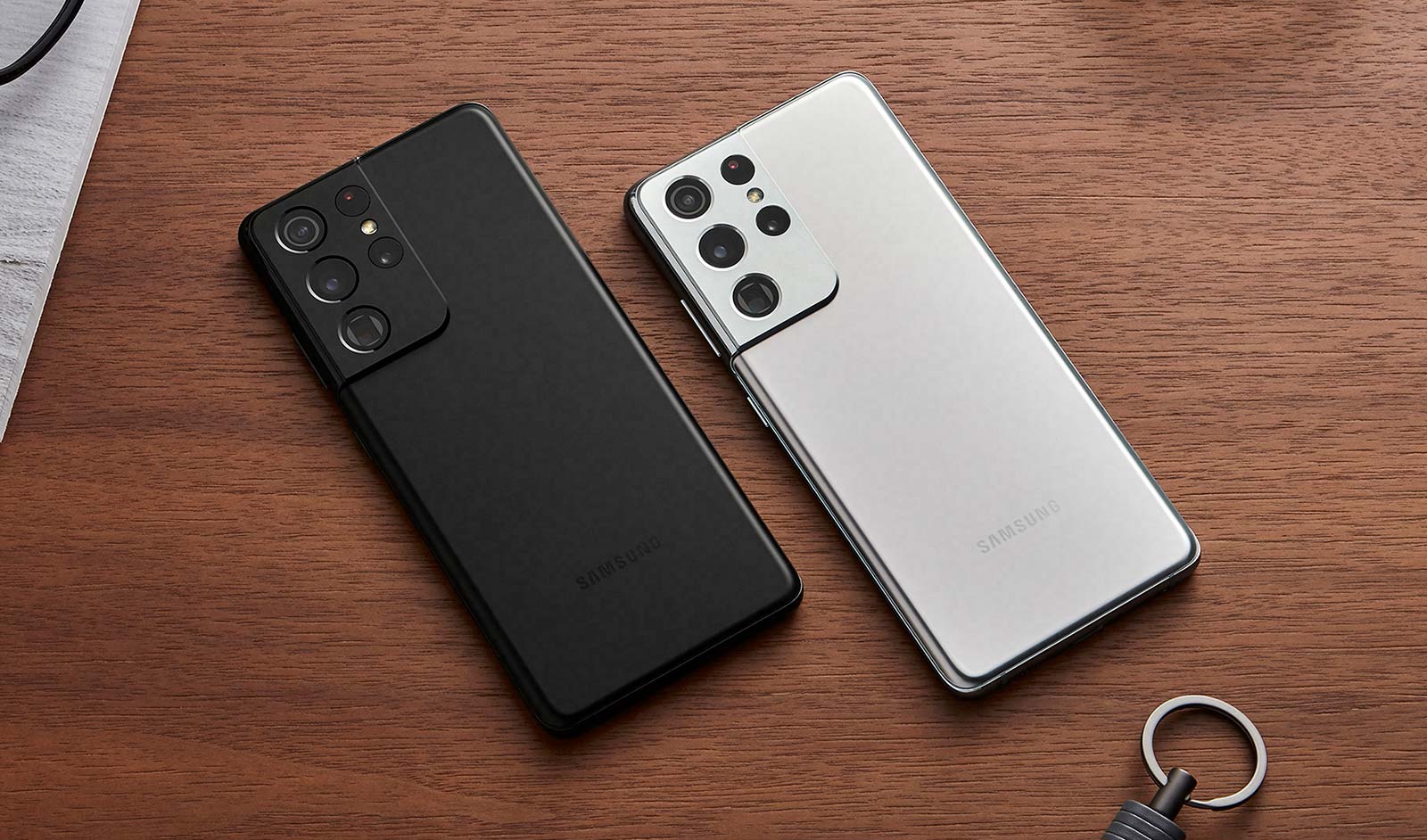 A little bigger again, the S21 Ultra is the flagship of the range, sporting a slightly bigger screen at 6.8 inches (compared to 6.7 inches on the S21+), plus Corning’s toughest generation of Gorilla Glass yet, Gorilla Glass Victus.

Inside, it’s largely the same technology with the Exynos chip, 5G, but a choice of either 12GB RAM or 16GB RAM, and either 256GB or 512GB storage, but the camera and the screen are different, enough so that it gives it a premium position in the line-up.

On the camera side of things, the S21 Ultra is a totally different system altogether, sporting a 40 megapixel at the front (compared to the 10 on the S21), and a rear camera system made of three cameras, including a 108 megapixel sensor for the standard wide angle (F1.8), a 12 megapixel ultra-wide (F2.2), plus two 10 megapixel telephoto cameras for 3x zoom (F2.4) and 10x zoom (F4.9).

That’s an assortment of cameras that can help Samsung get customers close, and there’s support for 12-bit RAW on the S21 Ultra, as well, plus a night mode that can cut the 108 megapixel sensor down to 12 megapixels using a technology called “Nona binning” that downscales in a grid of nine pixels (because 108 divided by 9 equals 12). 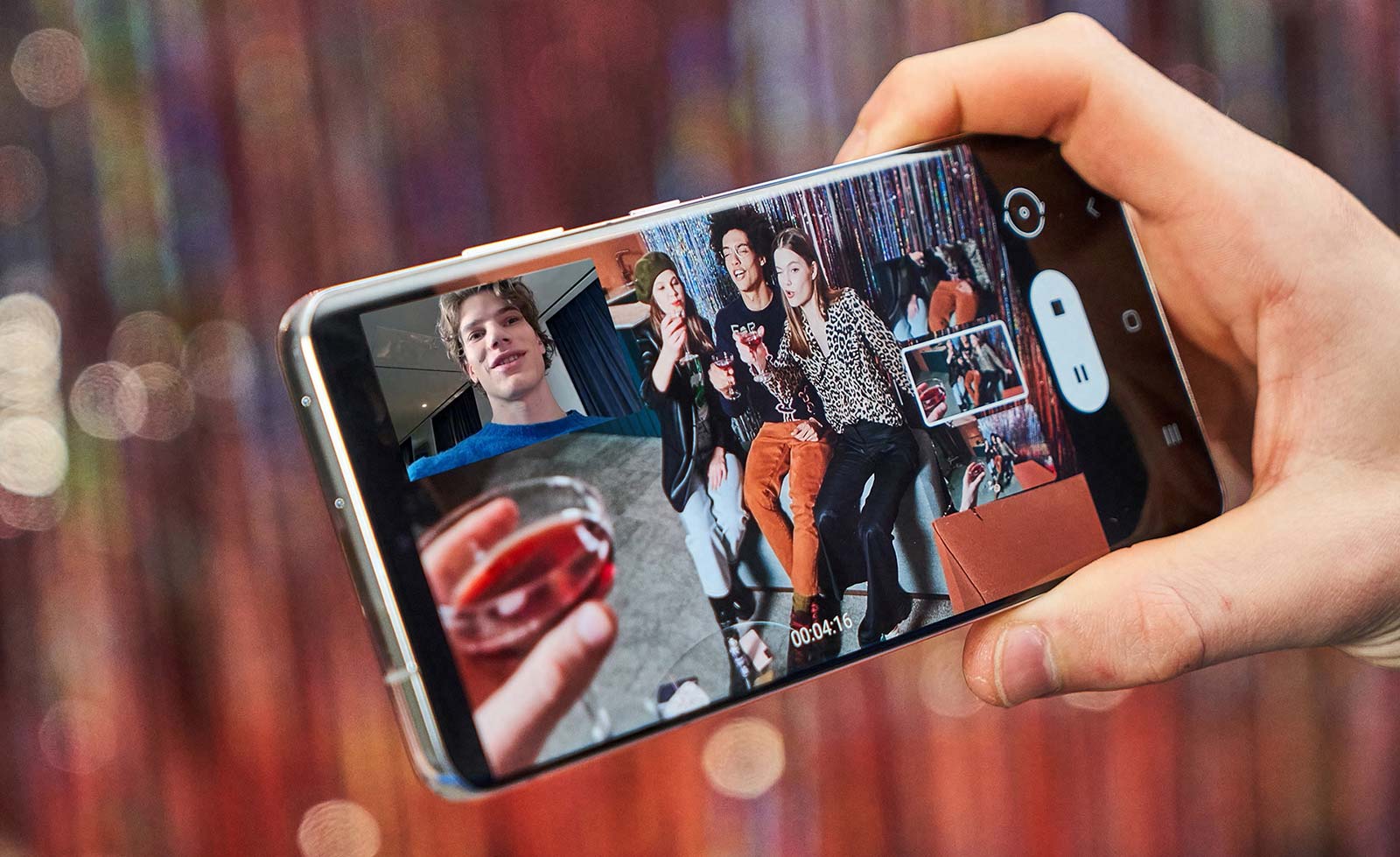 There’s also the screen, which is a Dynamic AMOLED that’s a little bigger than the other models, but also one that supports the S-Pen, allowing to use an existing S-Pen from a Galaxy Note or Galaxy Tab, though the Galaxy S21 Ultra doesn’t come with the S-Pen stylus at all.

We’re not quite sure how far the S-Pen support goes back, and whether it supports the Staedtler S-Pen released a few years ago, but it does theoretically mean the Galaxy S21 Ultra could be an upgrade path for someone who has previously owned a Galaxy Note phone. There’s no place to store the S-Pen beyond an optional case that includes a slot, but the S21 Ultra will support Samsung’s stylus, even if the rest of the S21 range does not. 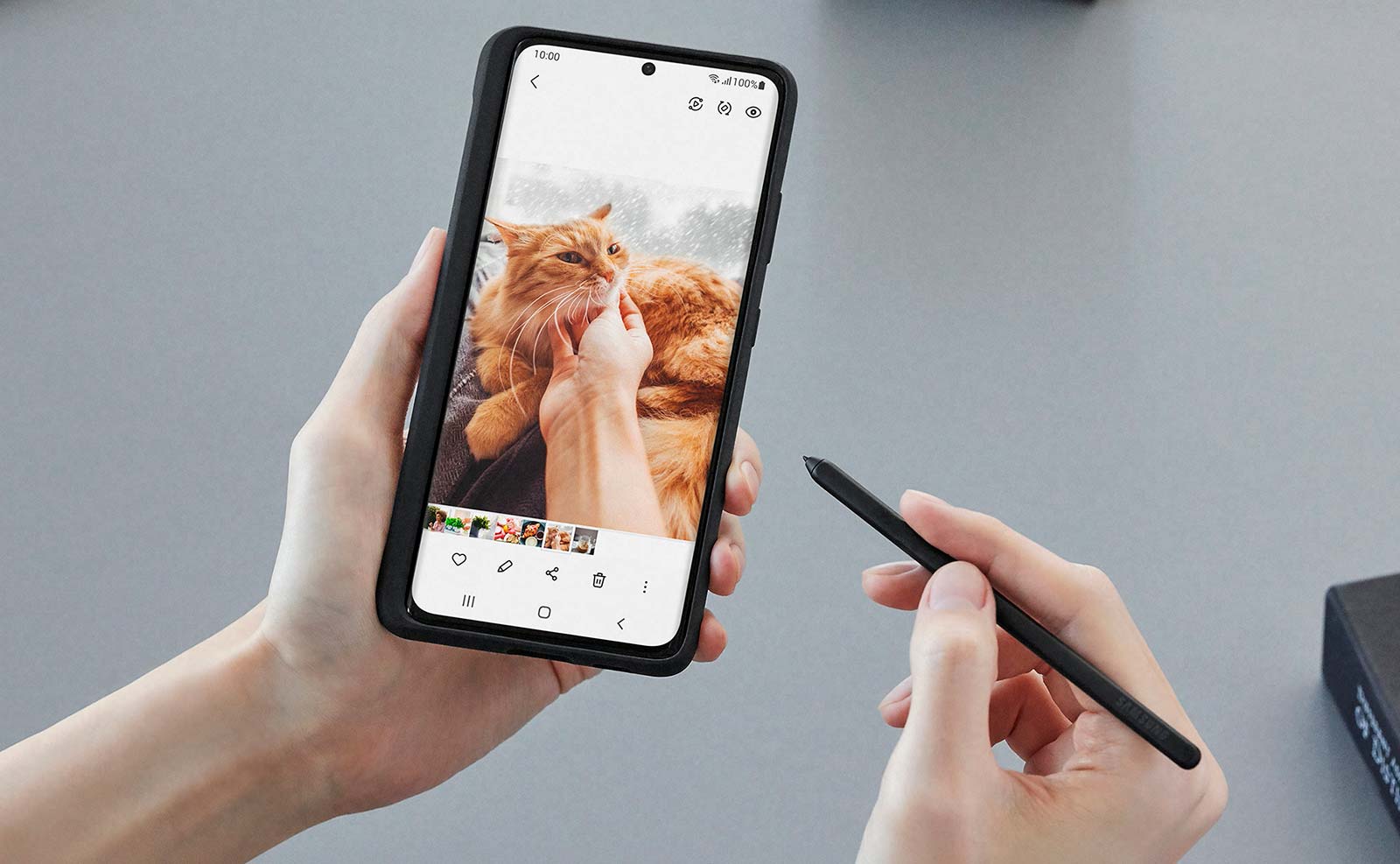 Pricing and availability for the Galaxy S21 range in Australia

While the range is a little varied, the pricing is clear, though a little on the exy side with the S21 starting at $1249 stretching all the way to $2149 for the S21 Ultra.

Samsung says they’ll go to pre-order this week, and we’re expecting a sale date closer to the end of January, potentially kickstarting a year of phones a little earlier than expected, and getting new mobiles in before any other brand.