It’s not just Google with a mesh solution, as one of the world’s biggest online stores offers Aussies its own take on mesh networking in Eero.

Wireless mesh networking is gaining traction locally, and there’s little wonder as to why: mesh networking can cover a home or business and potentially rectify WiFi problems with a take on wireless that spreads connectivity.

Different from a singular router, a wireless mesh system typically relies on several different points spread throughout a premises, and allows the network points to talk to each other. It’s the technology that originally allowed Sonos speakers to talk to each other for multiroom synchronisation and work the way they did, and is now being used for various other things, such as your regular home network.

Granted, you typically want more than one in your home, with three being the amount that mesh networking typically gravitates towards, but once it’s in place, WiFi range issues typically go away, with performance often affected positively, too.

Mesh networking isn’t exactly a quite space, though, as the technology has been out for some time. You can find it in models from D-Link, Linksys, Netgear, TP-Link, Google, and even Telstra, and now Australia is seeing one more, as Amazon joins the mesh networking throng.

Amazon is this week introducing the Eero mesh WiFi system to Australia, a company Amazon purchased a few years ago that aims to deliver a no fuss approach to upgrading a network using the power of mesh. Simply put, Eero aims to work by simply replacing the old router with the Eero, signing in using the app, and then having it all just work for you, seamlessly.

The Eero mesh system seems to work like any other mesh networking system, but instead relies on Eero’s own technology, something the company calls “TrueMesh”, which it says is built to dynamically reroute traffic in the background to keep a network balanced.

While that should mean Amazon’s Eero could potentially fix WiFi woes you might be having, representatives for Amazon did confirm to Pickr that Eero isn’t EasyMesh compatible, the recent mesh networking standard that has been picked up in support from Telstra and D-Link, to name a few. EasyMesh is a little different from standard mesh networking in that any EasyMesh device can be dropped into a setup with other EasyMesh products, meaning you’re not stuck buying just the same brand or devices from hereon in, a problem with existing mesh products.

While you won’t see support for EasyMesh in Eero, at least not yet, Eero appears to be going for the angle of simplicity, and even works with Siri via Apple HomeKit integration and support.

“Our mission at Eero is to make the technology in homes just work,” said Nick Weaver, Co-Founder and CEO of Eero.

“We’re thrilled we can now deliver this experience to customers in Australia who are seeking fast, reliable WiFi that they never need to think about again,” he said. 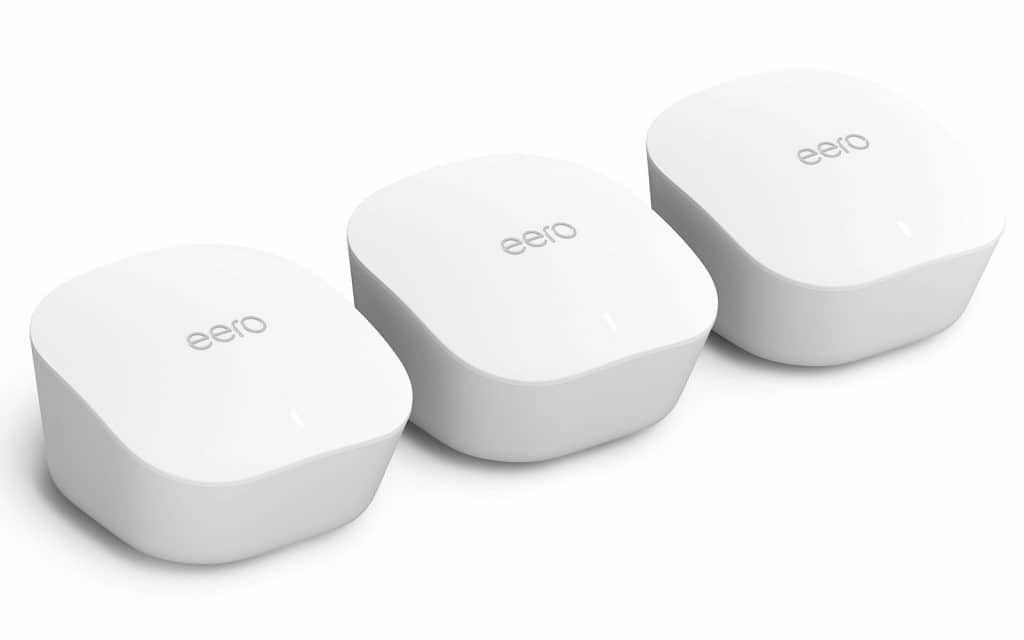 Eero might also be competing on cost in the mesh networking space, at least locally. In Australia, the single Eero mesh point will cost $199, while most competitors start above $200. A more house-wide approach to mesh networking typically sits at three units, with Amazon’s Eero costing $429 for the three pack compared to typically over that for three from other brands.

There are some brands competing in price, such as D-Link’s COVR AC1200 which sits around the $399 mark, as well as the Linksys Velop models for a similar price, but with most three packs of mesh networking approaching $500 and higher, it’s clear that beyond simplicity, Eero is playing on price.

You won’t find Amazon Eero in stores, though, at least not yet, with Amazon’s online presence the only place so far that you can find Eero from, arriving later this month.