There’s not a lot of flagship phone choice in Android in 2021, so which is best so far: Samsung’s flagship 5G phone or the equivalent from Oppo?

Australians looking for a high-end Android phone in 2021 might be feeling like there’s not a lot to pick from, and there’s a pretty clear reason why: there isn’t.

While 2021 hasn’t quite kicked off with a massive number of phones, most of what has launched has been focused on the mid-range and below, with the high-end flagship phone race largely being between two players: Oppo and Samsung.

LG has bowed out of the phone race entirely, and Google’s phones last year were positively mid-range no matter how you cut it. We’ve not seen a high-end Motorola as of yet, with the focus mostly in the middle, and Huawei doesn’t really make Android phones anymore, or not in a way that you can use them with the Google Play Store in Australia.

So right now, the high-end Android phone market primarily consists of two players, and they each have phones out.

If you wanted a high-end Android phone in the first half of 2021 in Australia, your choices are pretty clear: either the Samsung Galaxy S21 Ultra or the Oppo Find X3 Pro. Which is best? 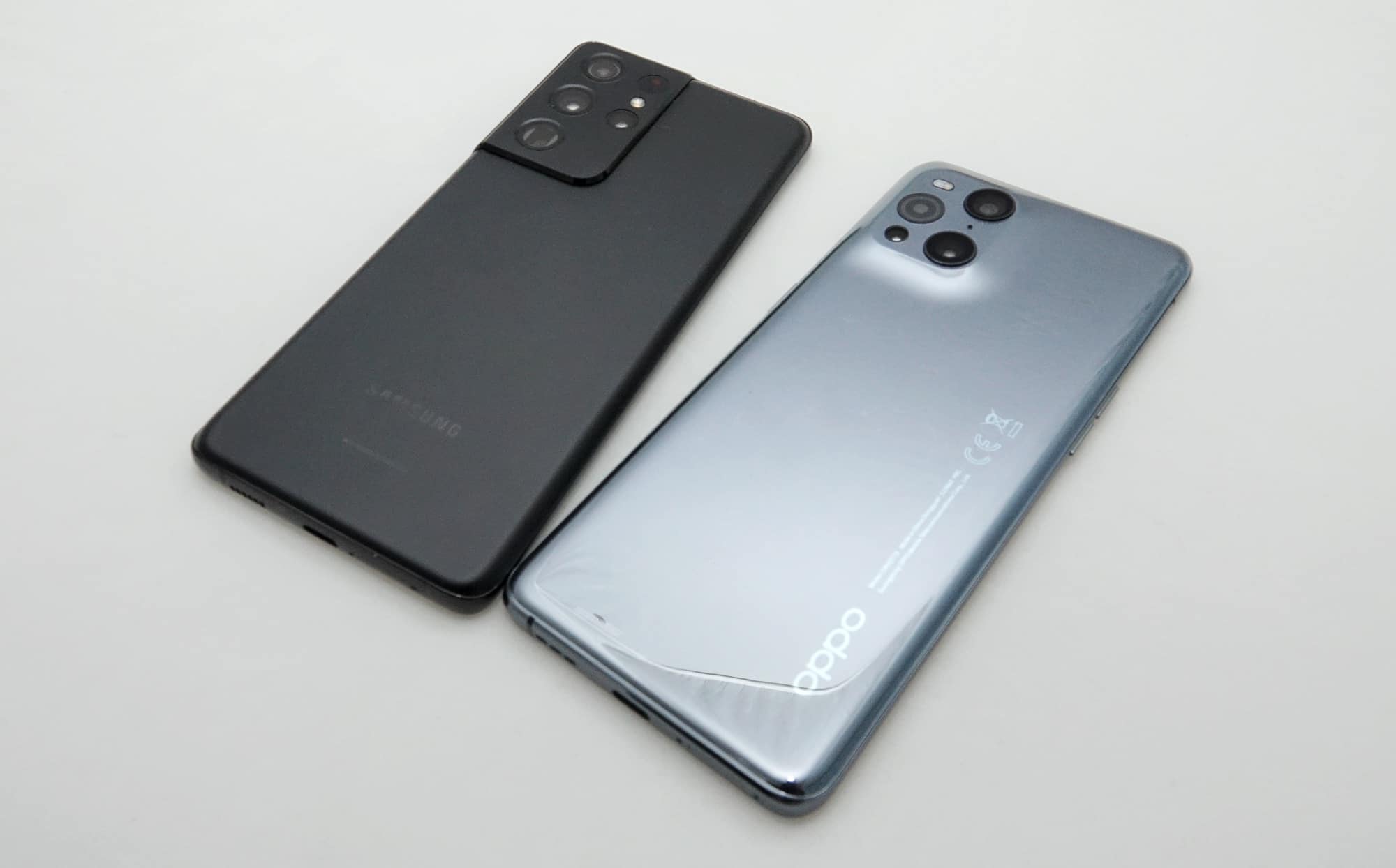 Let’s start with design, because both have similar fronts with an all-screen approach that is mostly display, while the back is where things change.

The back of the S21 Ultra opts for Samsung’s new camera block that pushes out from the design slightly, almost like a traffic light decided to make itself know at the rear of your phone. It works better in colour, such as what we saw in our Samsung Galaxy S21 review, but it’s also nice enough on the eyes in the black we saw on the S21 Ultra, as well.

However we think Oppo might have the edge by removing the pronounced difference between the camera and the body, and kind of blurring the lines. In the Find X3 Pro, the slick glass back offers a soft approach reminiscent of the T-1000 in Terminator 2, only not evil at all. It’s a lovely design that might be a little too slick, but is cool enough that we’ll give this category of design to Oppo over Samsung.

Next up is durability, and with both phones made from metal and glass, and sporting water resistant ratings, you’ll find there’s no clear winner here.

You can wash both under the tap if you head to the beach, but we’d also try to avoid dropping them because of those big glass screens. Essentially, they’re about as durable as each other, which is to say, they’re not. Not really, anyway. Washable, but not durable. 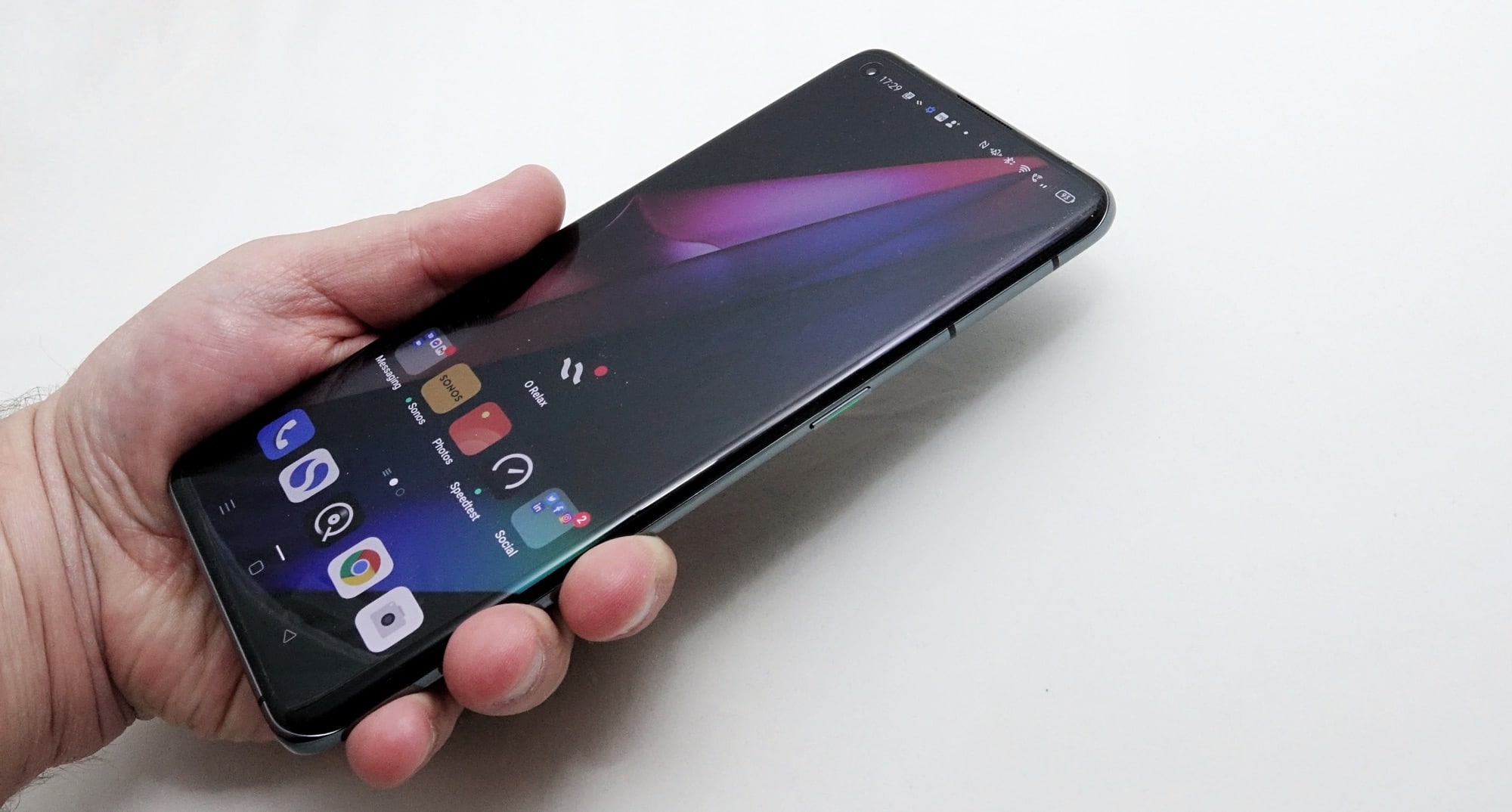 However there is a winner in comfort and fit, and it might be because of the slight size difference.

While they’re almost identical in screen size — 6.7 inches on the Oppo and 6.8 inches on the Samsung — and even have nearly identical measurements on height, width, and depth, there’s a difference in weight you may notice.

Both are big phones, for sure, but the Oppo Find X3 Pro weighs around 193 grams, while the Samsung Galaxy S21 Ultra weighs around 227 grams, boasting over 30 grams difference.

Granted, that’s not a size your pocket is likely to notice, but it’s one that helped us feel the Find X3 Pro was easier to carry in ours, which was a win for us. 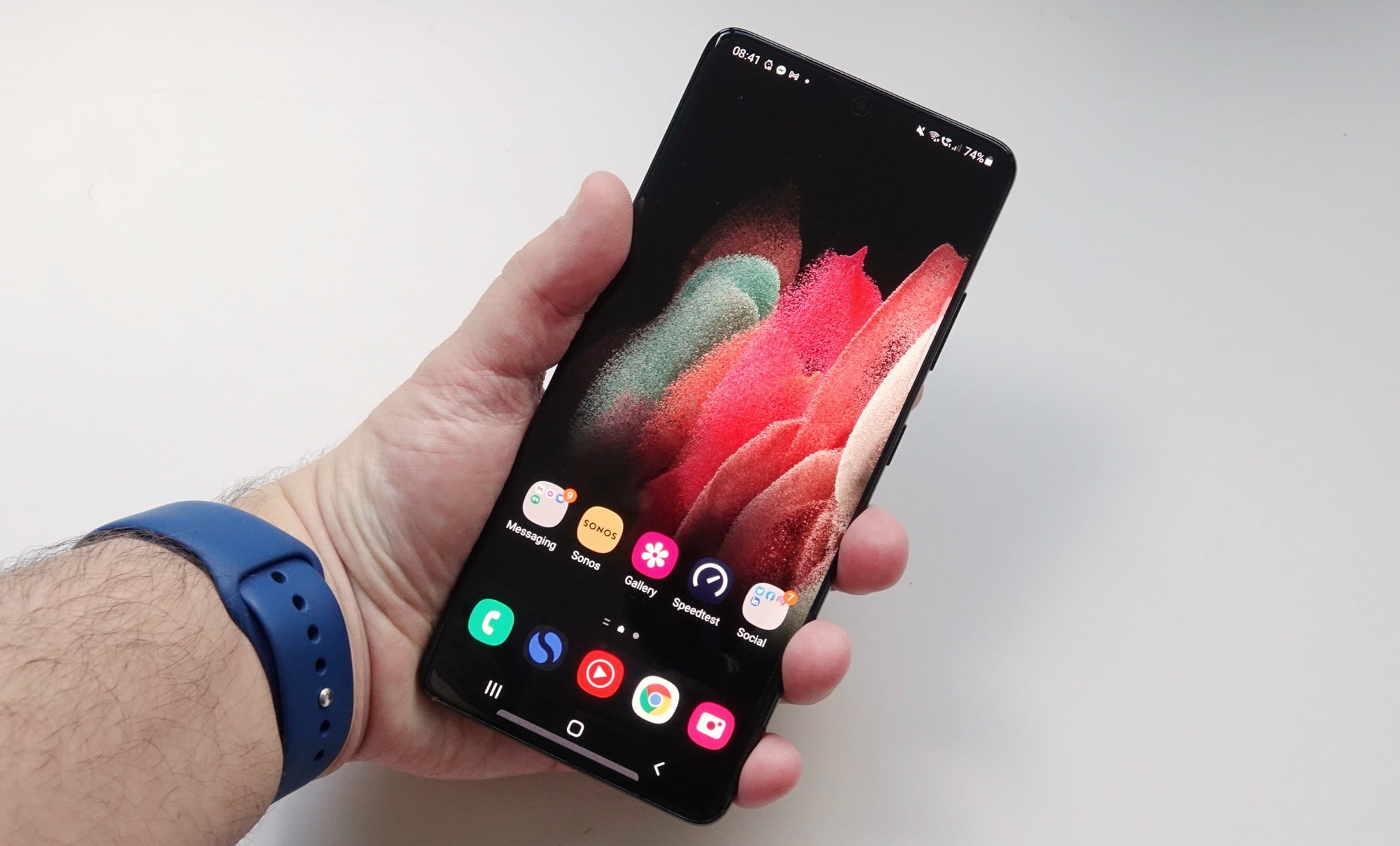 Let’s check features next, because there are similarities — they’re both phones! — and then there are some clear differences.

Both devices are pretty much geared towards the mobile communications and convergence concepts our smartphones have become, ideal for social networking, email, web browsing, games, taking photos, ordering food, calling an Uber, using maps, and pretty much everything your phone has become known for.

They both have 5G, wireless charging, lovely AMOLED screens that shine, and while we’ll get to the cameras shortly, they both have plenty to work with in that department, too.

However Samsung has also bundled in a little bit of an extra feature that the Galaxy S phones have never received before: support for the S-Pen.

Typically something that only comes with a Galaxy Note phone, the S21 Ultra includes support for Samsung’s S-Pen digitiser stylus, and while it doesn’t come in the box, if you have one from an older Galaxy Tab tablet or even one of the many Galaxy Note phones — say a Galaxy Note 9 or a Galaxy Note 10+ — you can use that S-Pen with the S21 Ultra, or buy an optional one. That’s a feature that kind of gives Samsung a bit of an edge over Oppo, so we’ll give this category to Samsung’s Galaxy S21 Ultra. 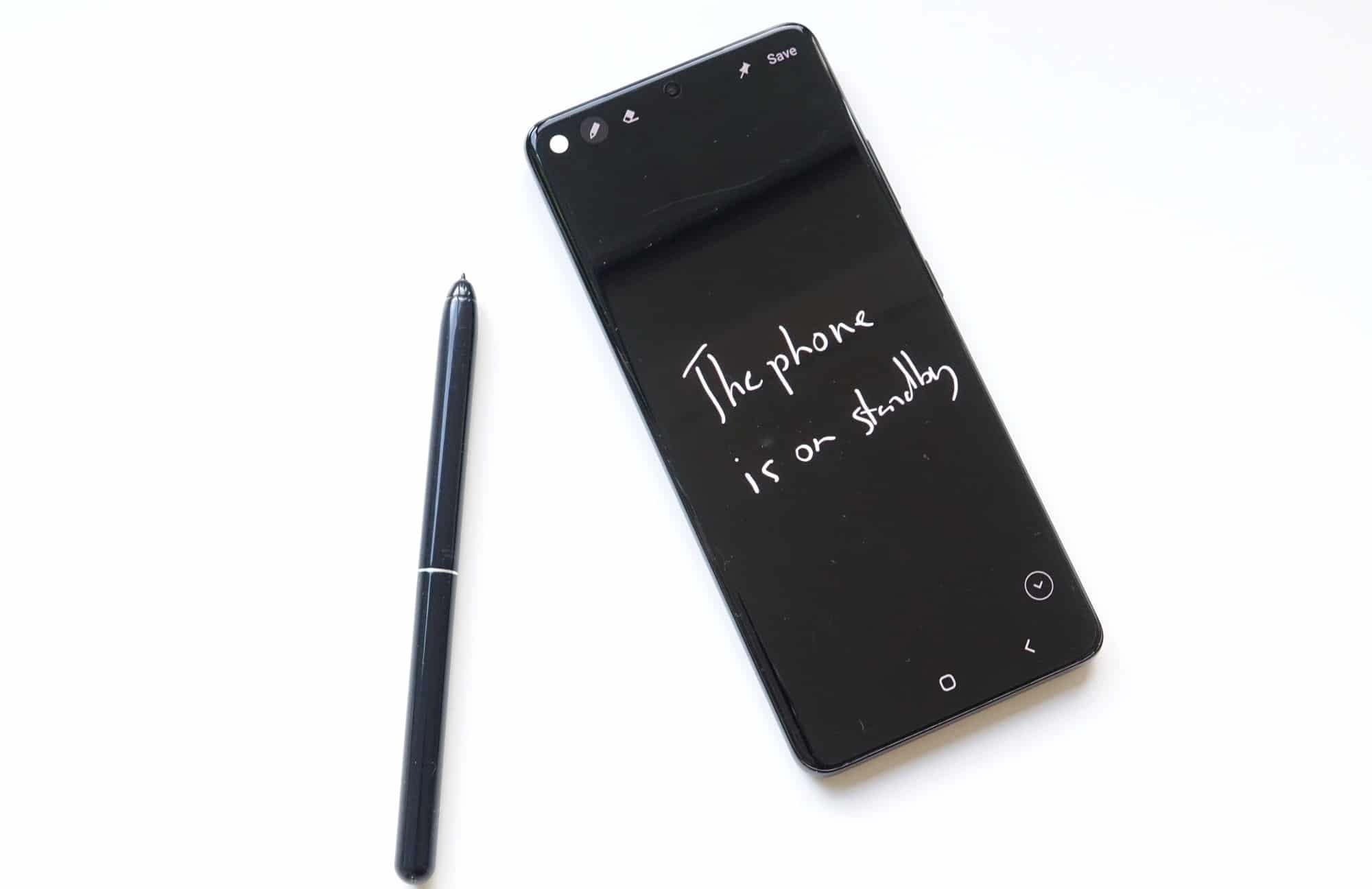 Controlling the phones is much the same, though, with no clear winner.

Both the S21 Ultra and Find X3 Pro offer an in-screen fingerprint reader which is about as reliable as either one, which is to say expect it to work 70 to 80 percent of the time, and that your facial unlock system — which is on both, too — dealing with the unlock the times when the fingerprint fails, or you’re just too lazy to stick your thumb on the screen.

They’re both Android 11 based, so there’s no usability issues, and while the S21 Ultra does support that aforementioned pen which gave it an edge in features, it doesn’t come with the phone, so it’s not really a bonus to using the phone unless you know what it is.

Honestly, when it comes to using either the Oppo Find X3 Pro or the Samsung Galaxy S21 Ultra, they’re about as good as each other.

However, while they run the same version of Android, Samsung’s manages to feel tighter overall.

They’re close, for sure, but since neither Samsung nor Oppo has opted for a standard version of Android, choosing overlays instead, you’ll be using One UI from Samsung and ColorOS from Oppo, and the former of these is just a little tighter overall.

Oppo’s ColorOS has the odd quirk or two, such as a disappearing Google Discover screen only to randomly come back. It’s just one of those things that Oppo will likely patch up over time, but that gives Samsung the teeniest edge in this category. 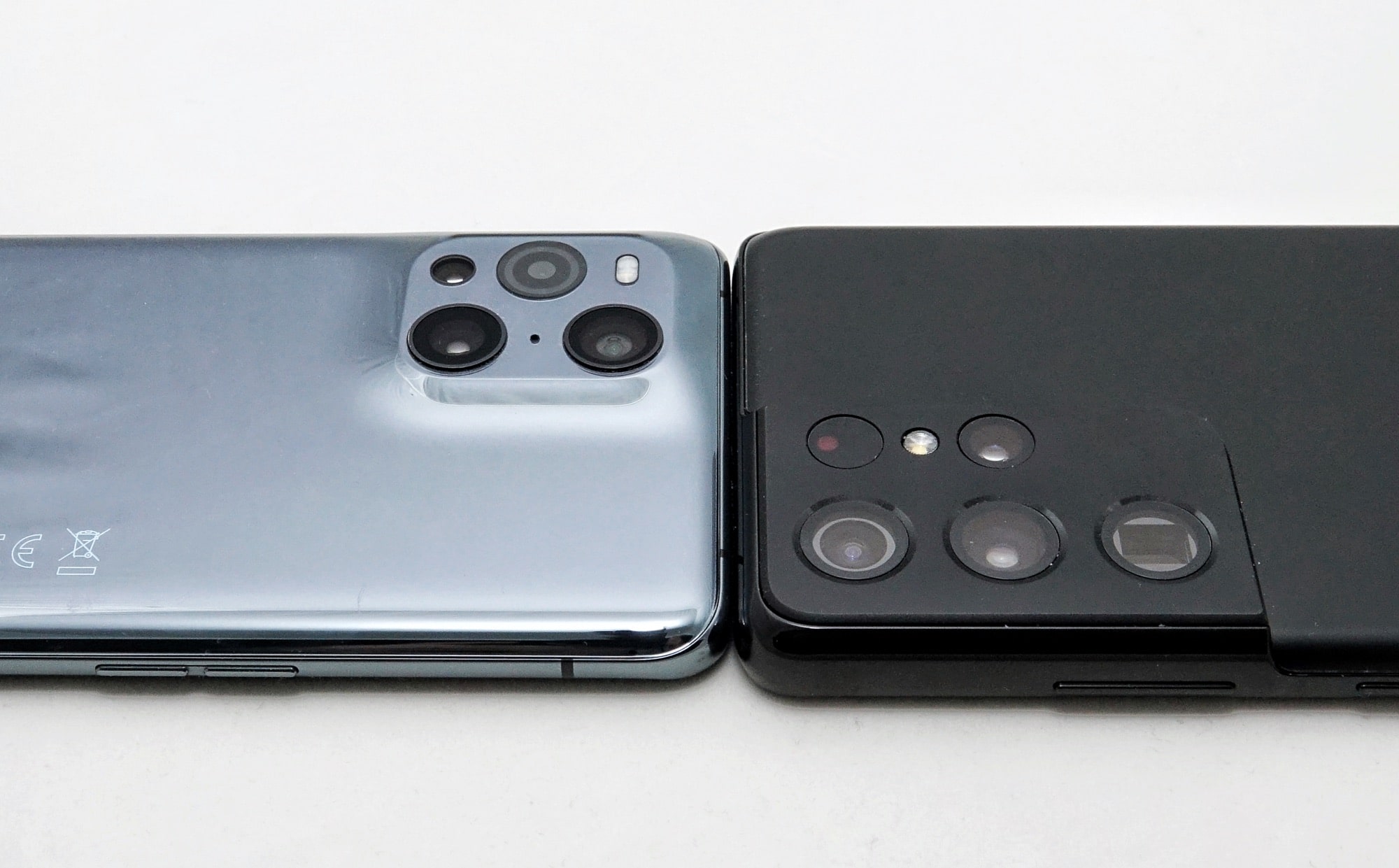 Now to camera, which is clearly one of the more difficult parts of the smartphone fight. Cameras are clearly a big area for phones, and comparing these two isn’t easy because they’re so different.

On the Oppo Find X3 Pro, you’ll find a four camera system consisting of two large 50 megapixel sensors for wide and ultra-wide, one 13 megapixel 2x telephoto camera, and a 3 megapixel microscope camera, the latter of which is very, very unique. Sufficed to say, Oppo’s Find X3 Pro can let you get super close to things much like you would a consumer-grade microscope. It’s cool, but won’t be the sort of thing everyone will use.

The Samsung Galaxy S21 Ultra also lets you get super close to things, but in a different way: rather than use a microscope camera, Samsung opts for two telephoto cameras of varying lengths, plus a huge stonking smartphone sensor.

Here, you’ll find a 10 megapixel 3x camera and a 10 megapixel 10x camera, both of which work with that massive 108 megapixel standard wide sensor, plus a 12 megapixel ultra-wide. Technically, these are designed to work with Samsung’s “Space Zoom” feature, which delivers 100x of digital zoom and merely blows up pixels in a phone that’s hard to keep stable.

We ignore Space Zoom, and you probably will, too, however Samsung’s combination of zoom lengths — 1x, 3x, and 10x — works with that huge 108 megapixel sensor to allow you to reach a little further in your shots, and make up the difference in between the focal lengths.

Both the S21 Ultra and Find X3 Pro deliver decent performance from the sensors, though neither appears to be on a level to beat the performance of the Apple iPhone 12 Pro Max at night.

Yet we’re giving this round to Samsung’s S21 Ultra simply because the camera technology is more useful overall than what the Find X3 Pro delivers. While the microscope camera is a cute addition to the X3 Pro, the range of telephoto lengths makes the Galaxy S21 Ultra that much more useful overall in regular life.

Flagship phones haven’t exactly been super impressive in the battery department of late, and neither the S21 Ultra or the Find X3 Pro change that remarkably, but there is one clear winner, with Samsung taking the lead.

With a good 500mAh more battery to work with, the S21 Ultra achieves a closer to 36 hours in our tests, which the X3 Pro doesn’t quite hit. The phone actually offer similar performance, but we suspect the larger battery of the Samsung helped it snag victory in this category.

Priced on the far side of $1500 closer to the $2K mark, neither of these phones is remarkably cheap, and so they’re kind of on par with each other as far as value is concerned.

What should I choose: Oppo Find X3 Pro or Samsung Galaxy S21 Ultra?

It’s pretty easy to work out that picking between either the Find X3 Pro or the Galaxy S21 Ultra isn’t going to be easy, but whichever you get, you’re going to get a pretty great Android phone.

In this battle of the best, it’s pretty much a tie: Oppo scores three categories, and Samsung scores three, too, while the rest are tied. That’s more or less indicative of the quality between both phones, which are equally solid options.

Of course, you can always check out our Find X3 Pro review and our Galaxy S21 Ultra review to see which is going to work better in your life, but if you’re looking for a flagship Android in 2021, either of these are worth checking out.