The best features don’t always have to cost top dollar, as Motorola proves in the Moto G82 5G, bringing 5G, water resistance, and a 120Hz AMOLED screen to $499.

Motorola is no stranger to the mid-range, and it’s “G” series has practically been about that since its inception, but there’s one thing this mid-range model has never been all about, and that’s design.

The G series has long been somewhat generic, and the G82 5G keeps that feeling going, with very little playfulness or sleek efforts in how it looks.

In a word, it’s “ordinary”, with a simple design — plastic back, glass front — though in a nice twist, Motorola has brought back some of the water resistance it offered on the G3 many years ago, the only Moto G series model that provided a hint of water protection. Back in the G3, the IPX7 protection wasn’t much, while here in the G82 5G, you’ll get IP52, which is water-repellant and useful for the odd splash of water or other liquids, but please don’t go swimming with this phone, as it just won’t tolerate it. There’s not that much water resistance here.

But you will find a reasonable amount of features, more than we’re used to seeing in the mid-range. Indeed, the G82 5G could be Moto’s way of saying “this is the new mid-range”, which it may well be. Kinda, sorta. 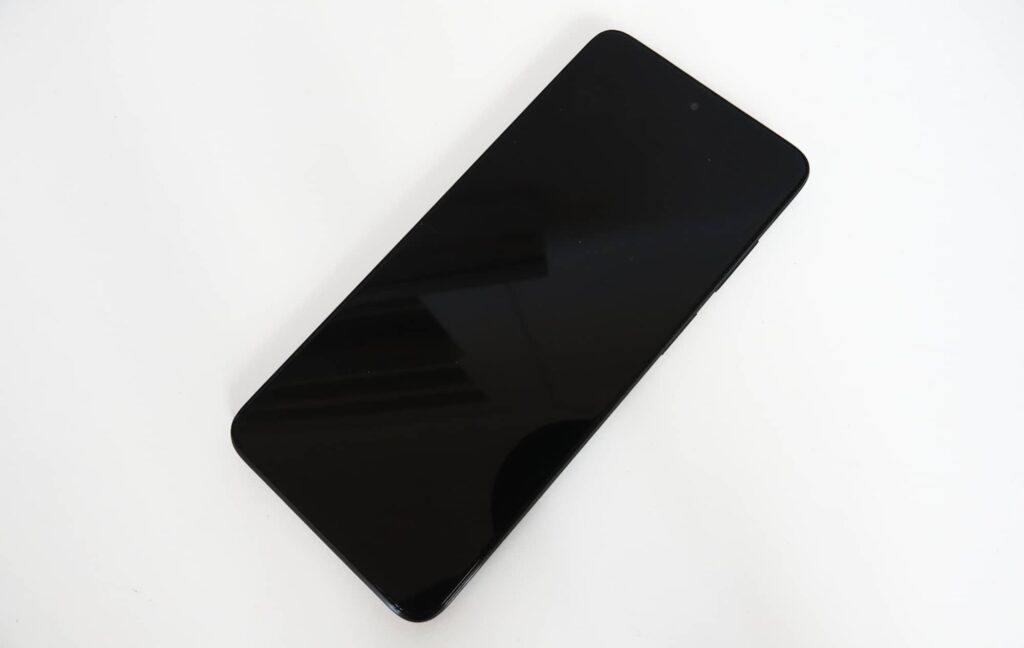 Kicking off that new mid-range is the Qualcomm Snapdragon 695 5G chip, a model Qualcomm launched last year to get 5G into more hands, including the mid-range, which is where the G82 is aimed at, for sure.

It’s paired with 6GB RAM and 128GB storage, the latter of which can be expanded using a microSD card slot, while Android 12 runs on the phone out of the box.

Connections are fairly normal for a mid-range phone these days, keeping the 3.5mm headset jack alongside a USB Type C port, but forgoing wireless charging, as it’s not a mid-range feature. You’ll find support for Bluetooth 5.1, GPS, 802.11a/b/g/n/ac WiFi 5, and Near Field Communication (NFC) for Google Pay, plus the “5G” that’s in the name, alongside support for older mobile connections if 5G isn’t available at the time. 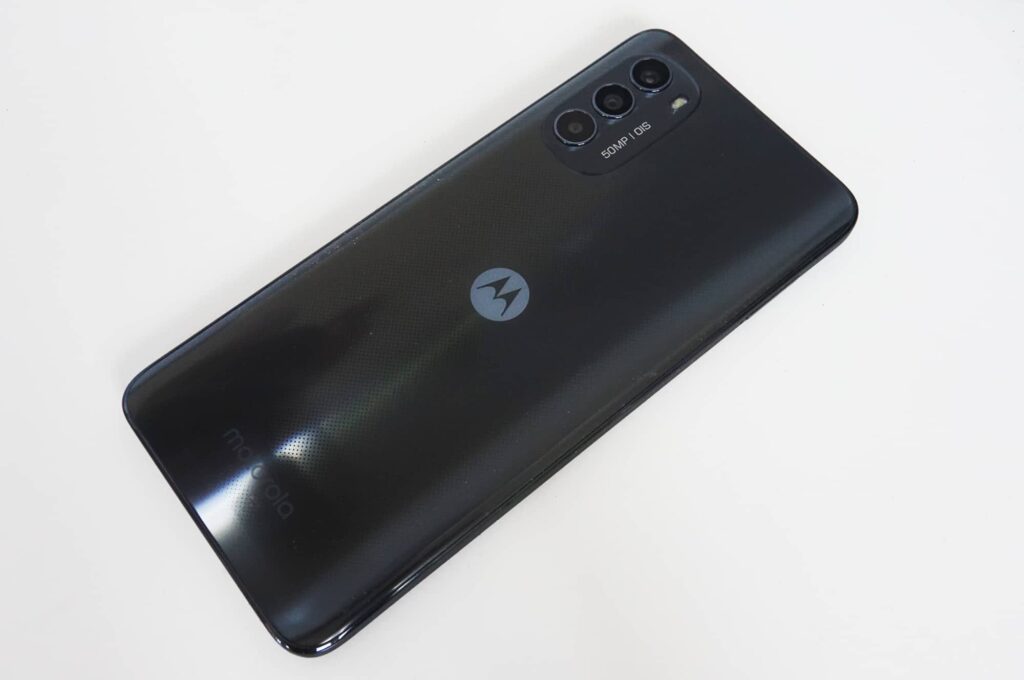 There are other features, such as Dolby Atmos support on two speakers, a fingerprint sensor built into the power button, and a 5000mAh battery, and it all sits under a 6.6 inch Full HD+ 2400×1800 AMOLED display sporting support for a 120Hz refresh rate, something of a premium feature in phones these days.

Pick up the G82 and you’ll find a simple design that’s easy to hold, even if it’s nothing spesh in terms of aesthetics.

You won’t find an in-screen fingerprint sensor here, though like the Moto G 5G we saw last year, the G82 5G offers a fingerprint sensor built into the power button on the side, which is easy to grip and switch on, plus bring back from standby. 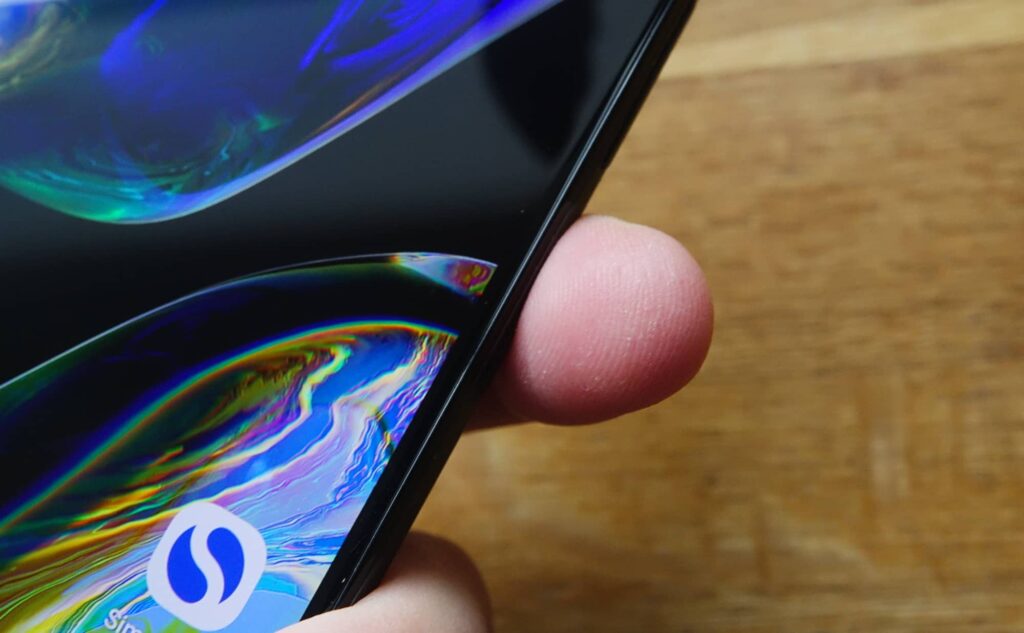 If anything, using the G82 5G reminds us very much of the Moto G 5G Plus, and we imagine given the similar price and feel that this new model is the spiritual successor to that first mid-range 5G G-series model.

Using Android 12 is also easy enough, and Moto’s changes mean you can opt for either the Google suggestion of gestures or the old on-screen virtual soft buttons, while some of the older Motorola additions are also along for the ride. That includes a favourite of this journalist, whereby you shake your wrist to fire up the camera from any screen. We wish more phone cameras triggered that way.

Using the G82 5G, you’ll find the animations are slick thanks to the support of a 120Hz screen, which tends to jump between 60Hz and 120Hz rather nicely, and doesn’t need you to use that higher refresh rate at all times, likely helping the battery. However, you can opt to leave it on permanently if you dive into the system settings.

More importantly than the screen’s performance is the system performance, which is mostly good, save for some obvious lag. You’ll notice it when it happens, and it seems the 6GB RAM isn’t quite enough to help Motorola balance it out in the G82 5G.

Even though the benchmarks show the G82 to be fairly formidable, especially against some other mid-range models, we saw hiccups here and there more often than we'd like.

Mobile performance is relatively consistent, though, and with support for 5G in the phone -- it's there not just in the name of the phone, but also the name of the chip! -- you can expect solid mobile speeds, network dependent of course.

In our tests across Sydney, we found speeds ranging from 100 to 300Mbps, though depending on what your network is doing at the time, you may see much, much better. 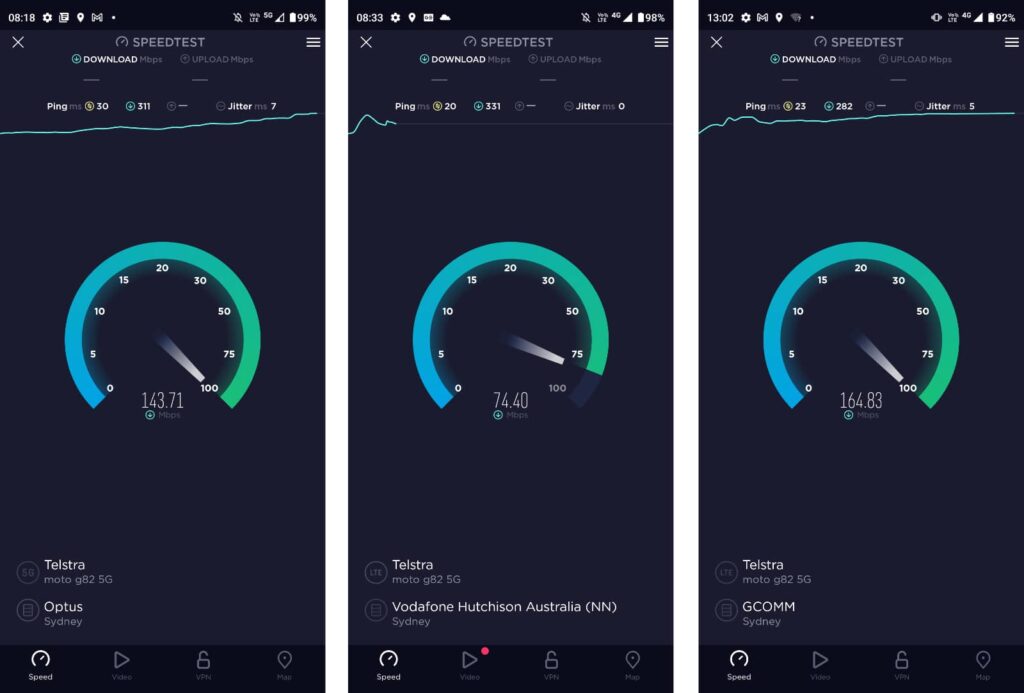 Mobile and system performance are one part of the performance equation, but so too is camera performance, and that may give you pause.

While the G82 5G is a triple camera phone, this is not a formula that adds to great pictures at all, unless you're only focused on snapping shots in daylight. And even then, well, there are hiccups.

A quick recap, you'll find a 50 megapixel F1.8 standard wide camera here, accompanied by an 8 megapixel ultra-wide also handling depth in portrait shots (the blurry background), plus a 2 megapixel F2.4 macro camera. That's your assortment, and in theory, it sounds great. On paper, it seems like a great idea, but life isn't on paper.

It's more of a 50 meh-gapixel camera, because while it captures totally fine photos in daylight, the speed of the camera can be frustrating at times. Unless the light is superbly bright, you may find the 50mp main camera captures blur from arms and faces, softening the image considerably.

When the scene loses some light and gets a touch darker -- or even a lot darker -- the 50 megapixel camera isn't much help, either in or out of the night mode.

Images range from impossible to see to blotchy and useless, so make sure you have some light going for you, because the G82's night capability isn't going to help you here at all.

We captured a small plush of Winnie the Pooh without a lot of light, and regardless of whether night mode's stacking is switched on or not, you're not going to see Winnie in a good light, or any at all. 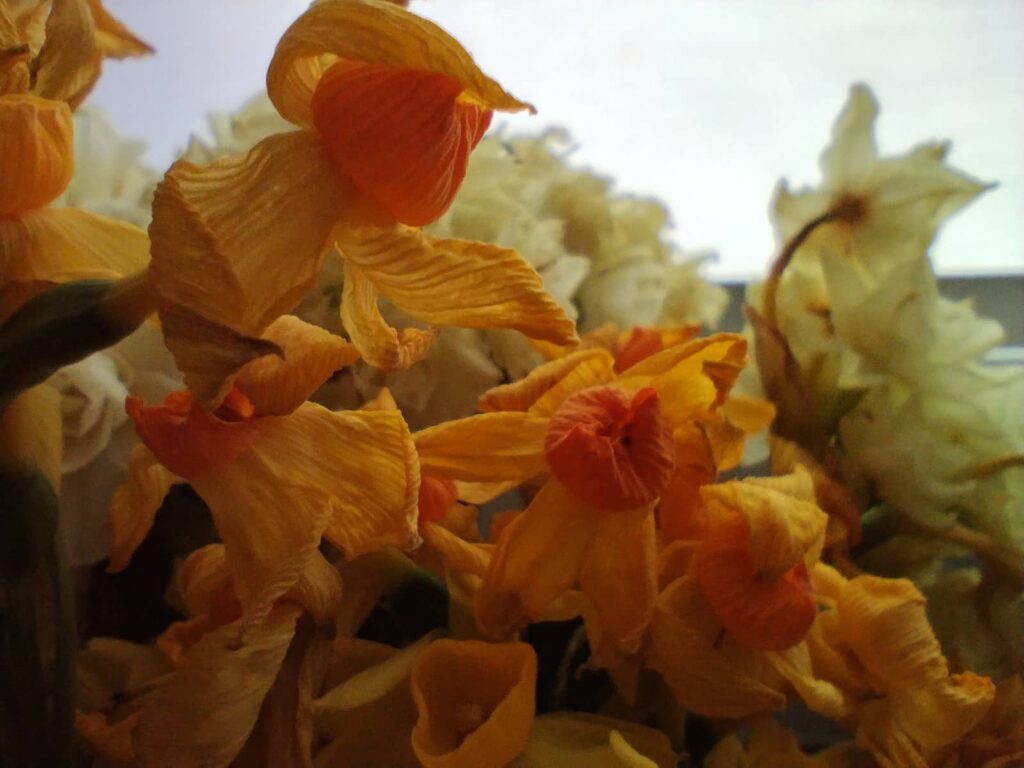 There's also a macro camera, something we've seen on mid-range cameras for a while, but it's not quite as advanced as what you can find in the iPhone 13 Pro, hardly a surprise given the cost. Rather, this is a 2 megapixel camera, letting you get close, but penalising you with a very low resolution to work with, which doesn't exactly highly the exciting details a macro looks to hone in on.

Overall, it's a meh rear camera, and probably the part of the package that feels as underwhelming as could be, and the front camera isn't much better.

While you can snap a decent selfie here and there, the 16 megapixel selfie camera on the G82 5G makes images feel soft regardless of the shot.

But while the camera isn't super impressive, the battery definitely is, boasting a good two days of life from regular use, while hefty users should easily see 24 hours.

Testing the Moto G82 5G for a several days, we found Motorola didn't need to warm up to our usage style, and used its 5000mAh battery to get an impressive two days of life. That's two days of battery while we did the regular thing of calls, texts, web surfing, music listening, and even keeping a Bluetooth wearable linked the whole time, too. 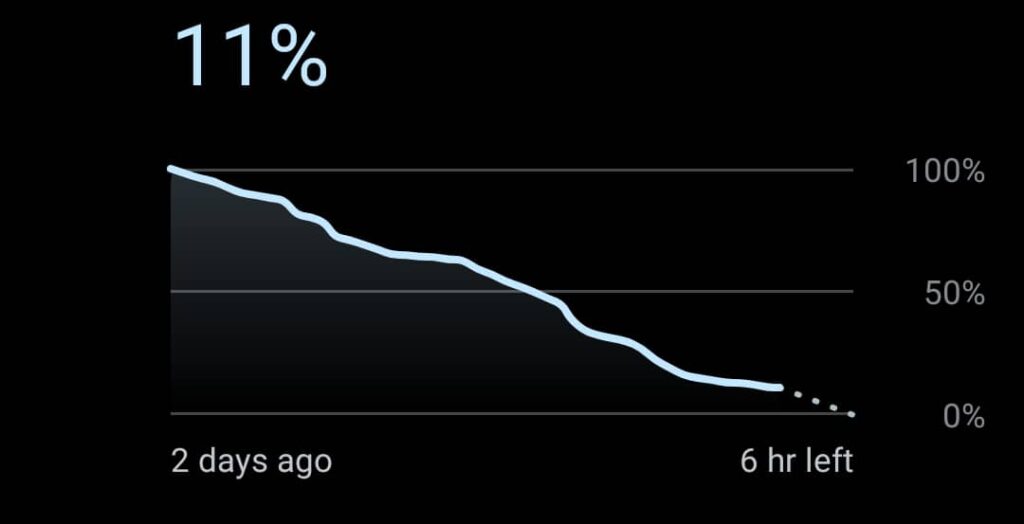 Heavy users should handle 24 hours with no problems, and likely get a little more, but the Moto G82 5G could well be a two day phone for most others, needing a charge the second night, though you could probably wrench out a full 48 hours if you desperately had to. 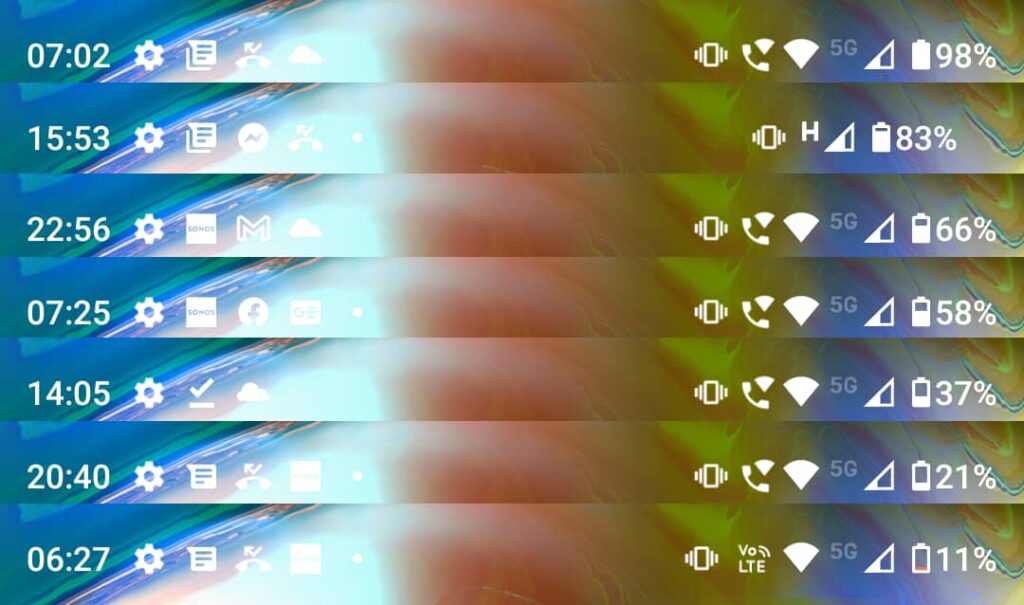 It's a similar story for the value, which doesn't surprise us given that it's an area Motorola is well known for lately.

Our Pickr Best Pick for value phones in 2021 was the $499 Moto Edge 20 Fusion, and the Moto G82 5G continues that with more excellence for the price.

While the chip, screen size, and camera assortment are different between the 2021 Edge 20 Fusion and the 2022 G82 5G, they both nail value quite well, costing $499 and feeling like they're both well worth it.

That's not to say the G82 5G is perfect, because it's not. There are things that remind you that, yes, this is a mid-range phone, with the performance and cameras reminding you of that through out.

The performance isn't terrible, but you might see slowdowns from time to time, even though the benchmark doesn't scream problems.

Frankly, the Qualcomm Snapdragon 695 is going to handle most of what you intend throw its way, and the 6GB RAM isn't a bad amount, either. But it's just not that new or high-end, especially not when we're beginning to see Snapdragon 7xx models in similarly priced gear, or Apple's A15 chip straight from the iPhone 13 if you spend a little more on the 2022 iPhone SE.

We have more words for the camera, which feels like Motorola could have done a lot better. 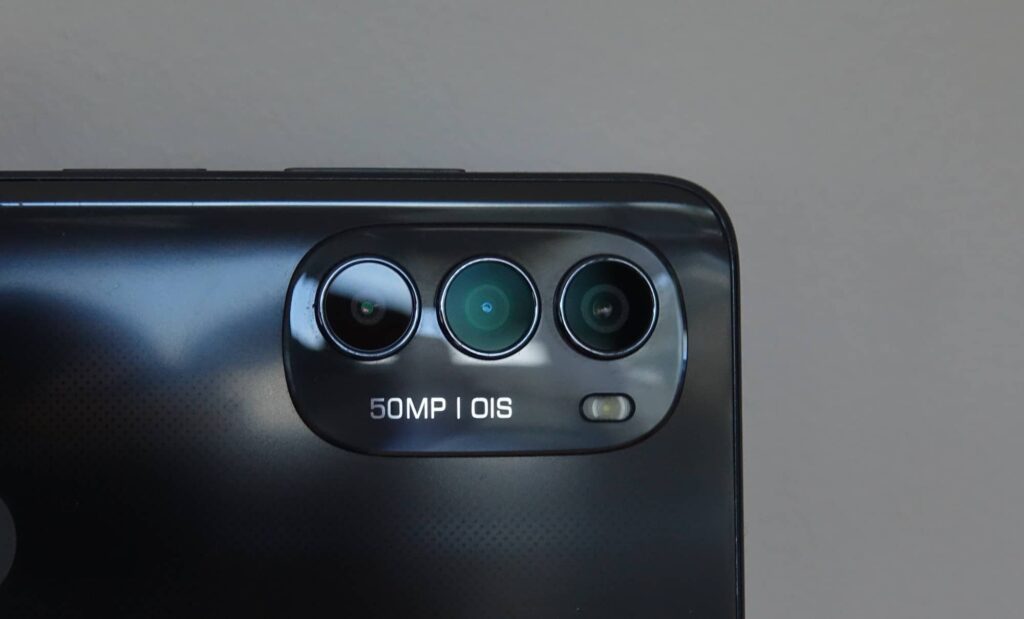 The G82 5G camera also suffers from speed issues and is frankly too slow. You'll fire either the on-screen shutter or even the volume button as a physical trigger, and it might wait a half second to fire. Sometimes it's instant, but you could still see blur, and overall the camera feels slow. It's just not a great experience with the camera in this phone. 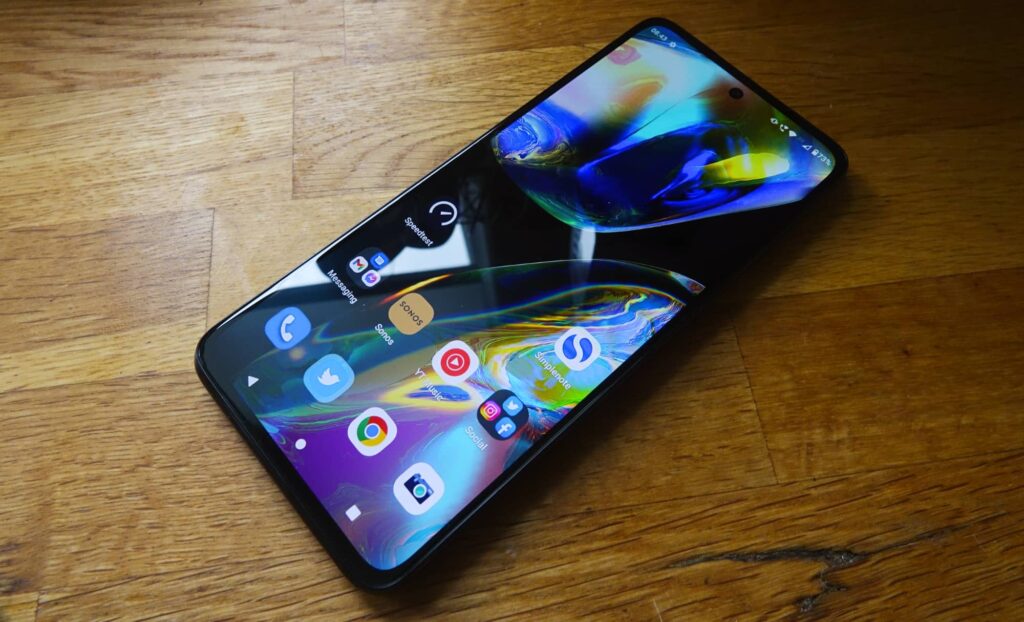 Outside of the camera, the Moto G82 5G is otherwise a decent phone, delivering some high-end features without a high-end price.

Water resistance is unusual in the mid-range, and so is a 120Hz AMOLED screen. Marry that with a great price, and you can see why the G82 5G reads like value. If you can skip needing a great camera, there's value to be had here.

The Moto G82 5G isn't a super pretty phone, and it's not going to win design awards, but if you're after a value that works, there's something to consider in this phone. 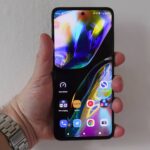