It’s not hard to find 5G phones for a mid-range price, but the Moto Edge 20 Fusion takes this to a new place, upping the specs considerably with something that may well be the new definition of value.

One of Motorola’s recent entrants to its slightly more premium “Edge” range, the Motorola Edge 20 Fusion isn’t your typical high-end phone, but it’s also not your typical low-end model, either.

Wedged somewhere between, it’s a Moto attempt at expanding on the more premium part of the mid-range, something the company experimented with in 2020’s Edge, the first “Edge”, so to speak. A year later, it delivered three more approaches on that, as the company found a way to divide the premium mid-range a little more differently, with a standard Edge 20, a premium “pro” Edge 20, and then this model, the “fusion”.

Calling it a fusion might give off the impression that you’re getting a mish-mash of parts, much like how fusion cooking provides you a few different areas culminating under the one roof. In a way, that’s not entirely wrong, as the Moto Edge 20 Fusion is about providing aspects of what makes a premium phone “premium”, while also keeping the price as modest as possible. 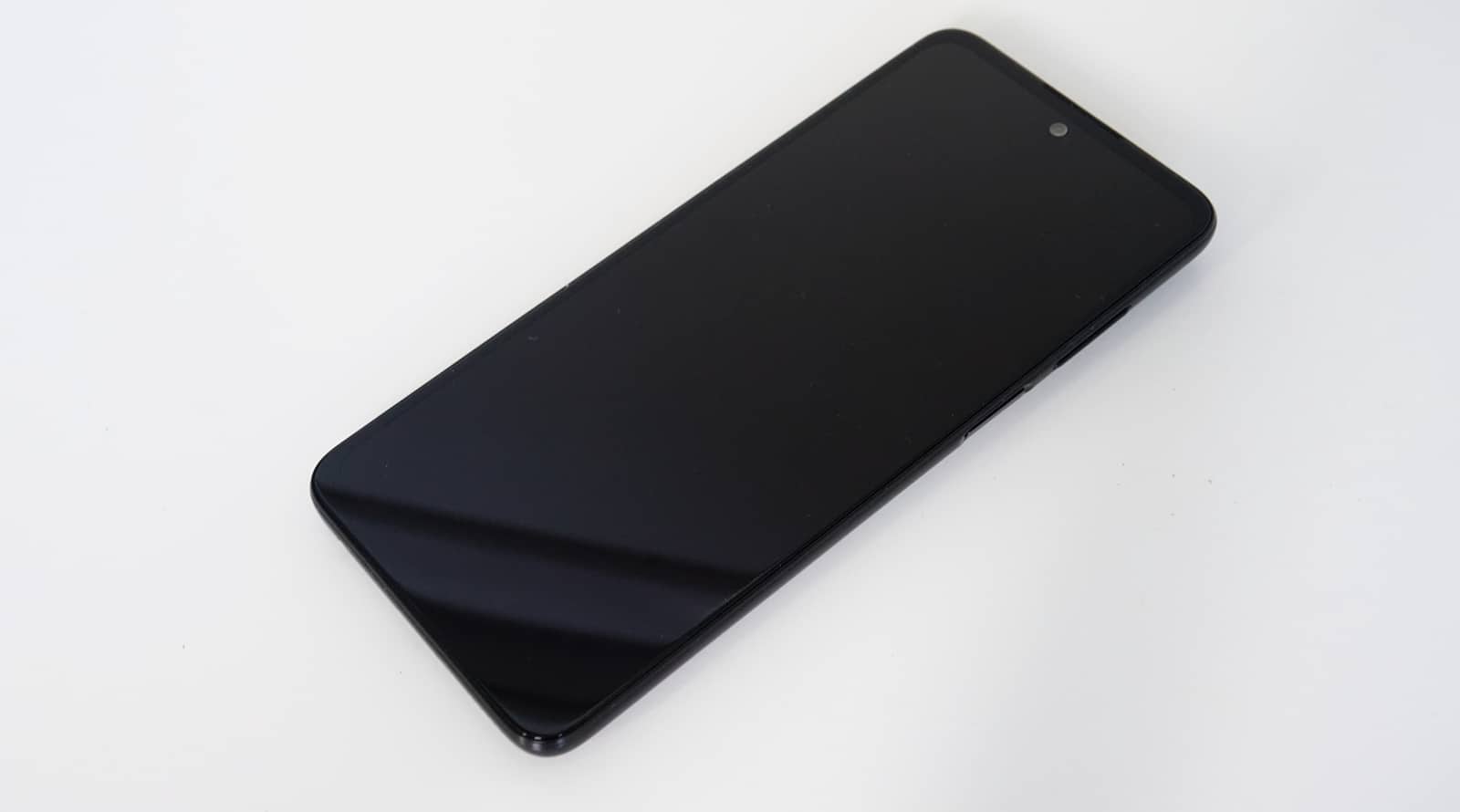 Design-wise, you’re not going to see the premium materials in this fusion approach, with a plastic body that’s simple and easy on the eyes, but doesn’t break any mould or approaches to phone design in the slightest.

It’s simple to look at, easy to hold, fairly sizeable thanks to the 6.7 inch screen, and also easy to carry, both in the hand and in the pocket.

Under that plastic and glass design, you’ll find a modest assortment of specs, certainly enough for its equally modest price point, though one area feels like you’re getting a little bit more. Just that little extra something.

You’ll skip the typical Qualcomm chip in the Edge 20 Fusion, with a MediaTek Dimensity 800U processor inside, married to 6GB RAM and 128GB storage, though unlike many phones, you can upgrade the latter with a microSD card if you choose to.

Android 11 comes on the phone out of the box, and there’s the typical assortment of wireless connections here, including 802.11a/b/g/n/ac WiFi 5, Bluetooth 5, NFC for mobile payment, GPS, and support for both 4G and 5G. Wired connections are also fairly friendly, with both a USB Type C port for charging and data, plus the 3.5mm headset jack so many phones go without these days.

Of particular note is the camera setup, with the Moto Edge 20 Fusion delivering a 108 megapixel F1.9 camera not unlike the model in the standard Moto Edge 20 we reviewed earlier, though the other cameras it’s connected to are a little different. You’ll find an 8 megapixel F2.2 camera accompanying it, plus a 2 megapixel F2.4 depth camera for portrait shots alone. Meanwhile, a 32 megapixel F2.25 camera sits on the front.

All of this sits under a sizeable 6.7 inch OLED screen sporting a 90Hz maximum refresh rate and a Full HD+ resolution of 2400×1080, with a 5000mAh battery sitting underneath it all. There’s also a side-mounted fingerprint sensor in the power button, support for face unlock, and a surprising IP52 water resistance rating, which should make it able to survive the most minor of water splashes from a knocked glass of water, but not much other water resistance.

Grab the phone and switch it on, and you’ll find the Moto Edge 20 Fusion is fairly responsive, thanks in part to the chip and memory combination on offer, plus a nice big screen which makes the whole thing easier to use.

As expected from its time being owned by Google, Motorola has largely left Android alone, with widgetised home screens, app menus, and even the Google Discover screen on the very left, kind of making it a stock approach to something not made by Google these days: a 5G phone on a budget.

You’ll find three sets of buttons here, as well, with a power button and volume control on the right, offering a fairly solid fingerprint sensor under the power button, while a Google Assistant trigger button is on the very left. Don’t worry, you don’t need to rely on this, but if you do want to talk to Google for things, it’s there for your needs.

Motorola has also brought the gestures from its other phones to the mix here, so if you’re one of those people that likes shaking your wrist to start the camera, you can do that from pretty much any screen, even standby.

Using the phone when it’s on, you’ll find a surprisingly capable performance, as Motorola wrenches out a fairly decent offering of speed from MediaTek’s Dimensity 800U, helped by the 6GB RAM we suspect, as well.

On the benchmark side of things, it’s not a total game-changer, and won’t beat high-end phones, but for a mid-range phone, the results are good overall.

It’s a similar experience to what life is like with 5G, because you’ll find capable 5G speeds on offer in the Moto Edge 20 Fusion if you look, network dependent, of course.

In tests on the Telstra 5G network across Sydney, we found speeds as high as 390Mbps, which wasn’t too bad at all. 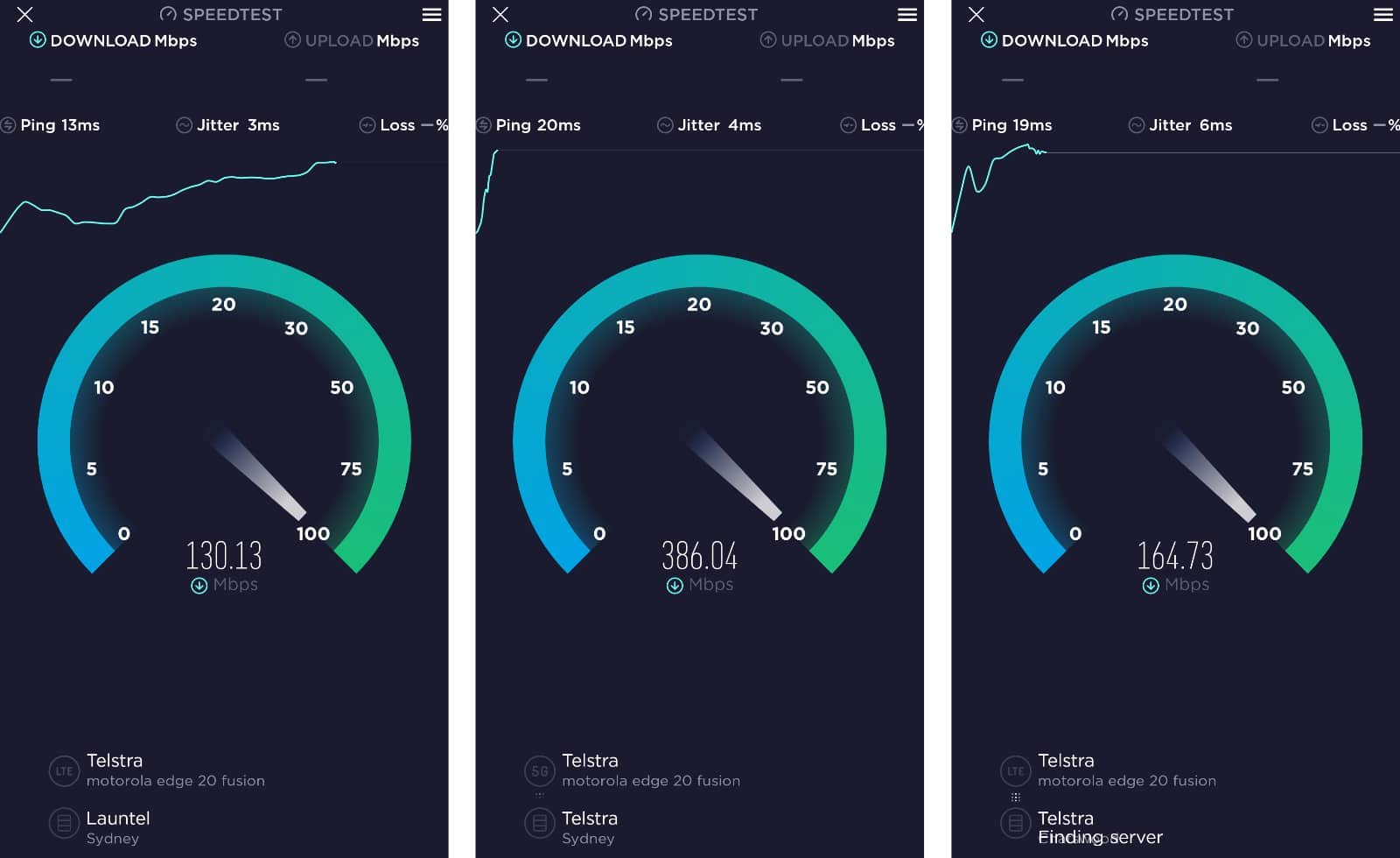 There’s a big camera in the Moto 20 Fusion, and given the price point, it’s a genuinely stunning inclusion. While most mid-range phones are happy with 12 or 27 or even a 50 megapixel sensor, the Fusion edition of Motorola’s Edge 20 comes with a staggering 108 megapixel sensor, similar to what’s in the standard Moto Edge 20.

We didn’t see the option for the full 108 megapixels like we did in its big brother, the Moto Edge 20 standard, but you will find images in daylight to be more than acceptable, while low light handles itself decently, as well. That’s mostly if you stick to the big sensor, because the 8 megapixel ultra-wide isn’t a fantastic camera for much, pulling out to let you get wide in daylight, but coming up a little short at night, while the remaining camera — the paltry 2 megapixel on the side — is pretty much just to blur the background in portrait shots, should you decide to use those. 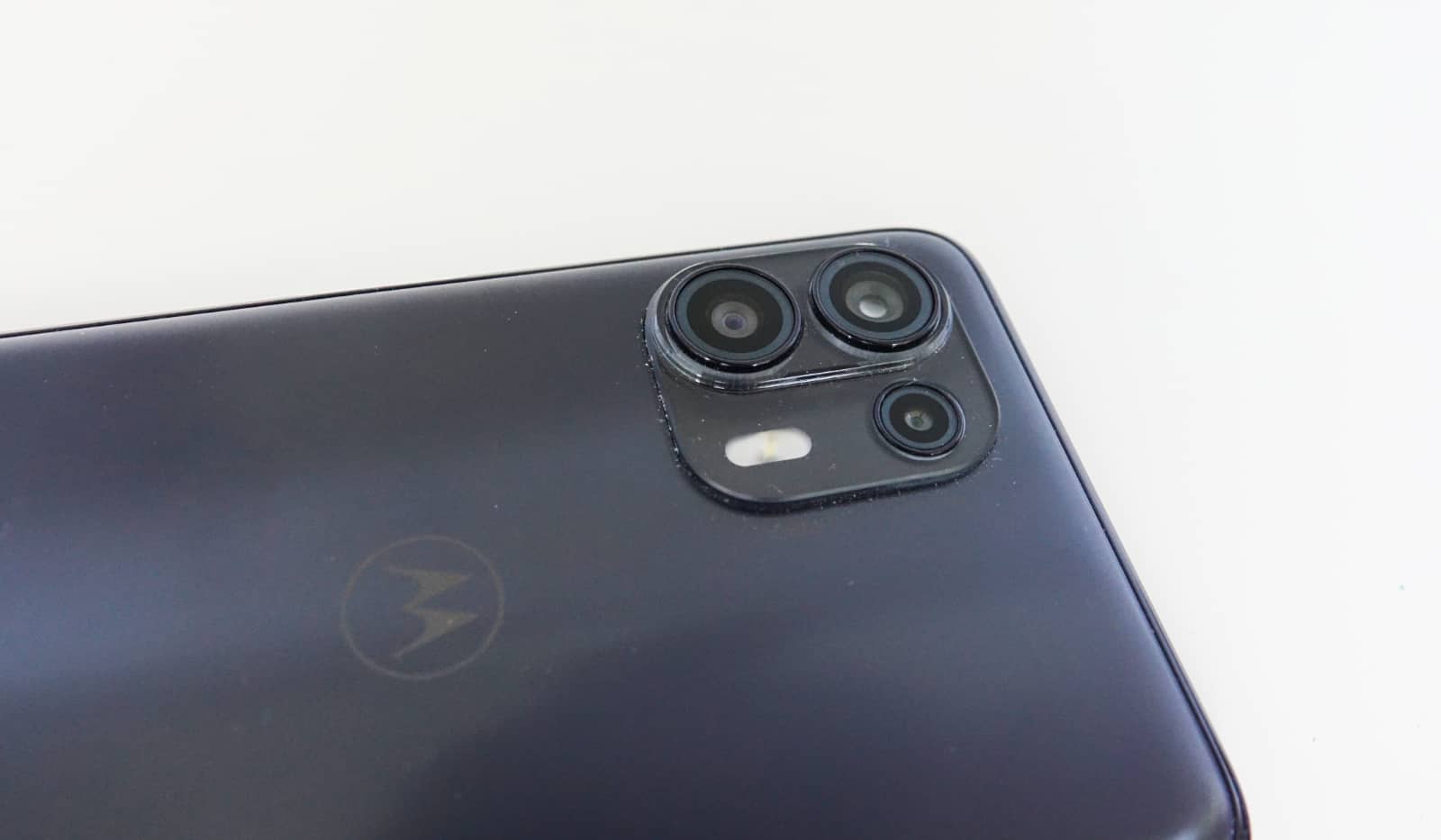 All up, it’s an acceptable camera when it works, though can feel a touch soft at time, and it does have an issue we can’t stop talking about: speed.

Simply put, the time it takes to either press the on-screen shutter or trigger using the physical volume keys doesn’t pan out to an actual photo the way you may expect, with there being often a second or two or three gap, because yet, this phone takes its time.

It takes its sweet time, and you may end up getting the wrong shot or blurry shots in the process.

Phone cameras are often hoped to be instantaneous, but somewhere between chip, memory, and other bits and pieces inside the phone, things can go awry. And in the case of the Moto Edge 20 Fusion, that appears to be the case.

As it is, if you spend time in the phone taking photos, you may find the phone captures the image just fine. However, more often than not, you might be waiting, and that’s a problem.

While the camera has high intentions that ultimately feel a bit of a fizzer thanks to a speed issue, the battery is an area that handles very, very well. It’s easily one of the best features about the Moto Edge 20 Fusion, hands down.

These days, it’s not unusual for good battery life in a 5G phone to match a day. That’s normal, frustrating as it is. It’s almost as if you’re expected to need to charge your phone nightly, and possibly before the day is through.

The Moto Edge 20 Fusion bucks that trend, achieving as much as two days of battery life if you want it to, though a day and a half is likely the amount you’ll settle for. It means you won’t need to charge the phone every night, and can do what 4G mid-range phones are known for, wrenching out every bit of available life and not just being content for a day.

And you can do it for a pretty staggeringly solid price tag, delivering that battery life and spec set for $499 RRP in Australia, or even lower if you go for a look.

Granted, we’re running a little late with our Moto Edge 20 Fusion review, but the price we’ve seen this phone drop to just recently has it edge closer to the $300 mark.

The price and spec setup makes the Moto Edge 20 Fusion a fairly easy recommendation, though there’s one major issue we’re not a huge fan of: the speed the camera works with.

Yes, you get a 108 megapixel camera, which is a seriously cool inclusion in a sub-$500 phone. Unfortunately, the camera often takes longer to fire than you may actually care for, causing you to miss shots in the process.

While reviews of Samsung phones seem to repeatedly highlight this issue, we’re not sure it’s quite the same here in the Fusion. You can get slowdowns with practically any phone, that’s true, and you might even see them pop up from time to time in the top-end iPhone 13 Pro Max. It happens, sure.

Yet in the Moto Edge 20 Fusion, it’s a repeated issue that just doesn’t go away, with most of our time with the phone’s camera delivering one to three seconds of time before the camera actually fired the shot. It’s a result that means going from having a cool camera size to one that’s too slow to be genuinely usable.

Hopefully, it’s just as something as simple as a firmware patch with a bit of code that improves things, but we’re running late with this review, and several months after release, we honestly have our doubts that Motorola will fix this issue. 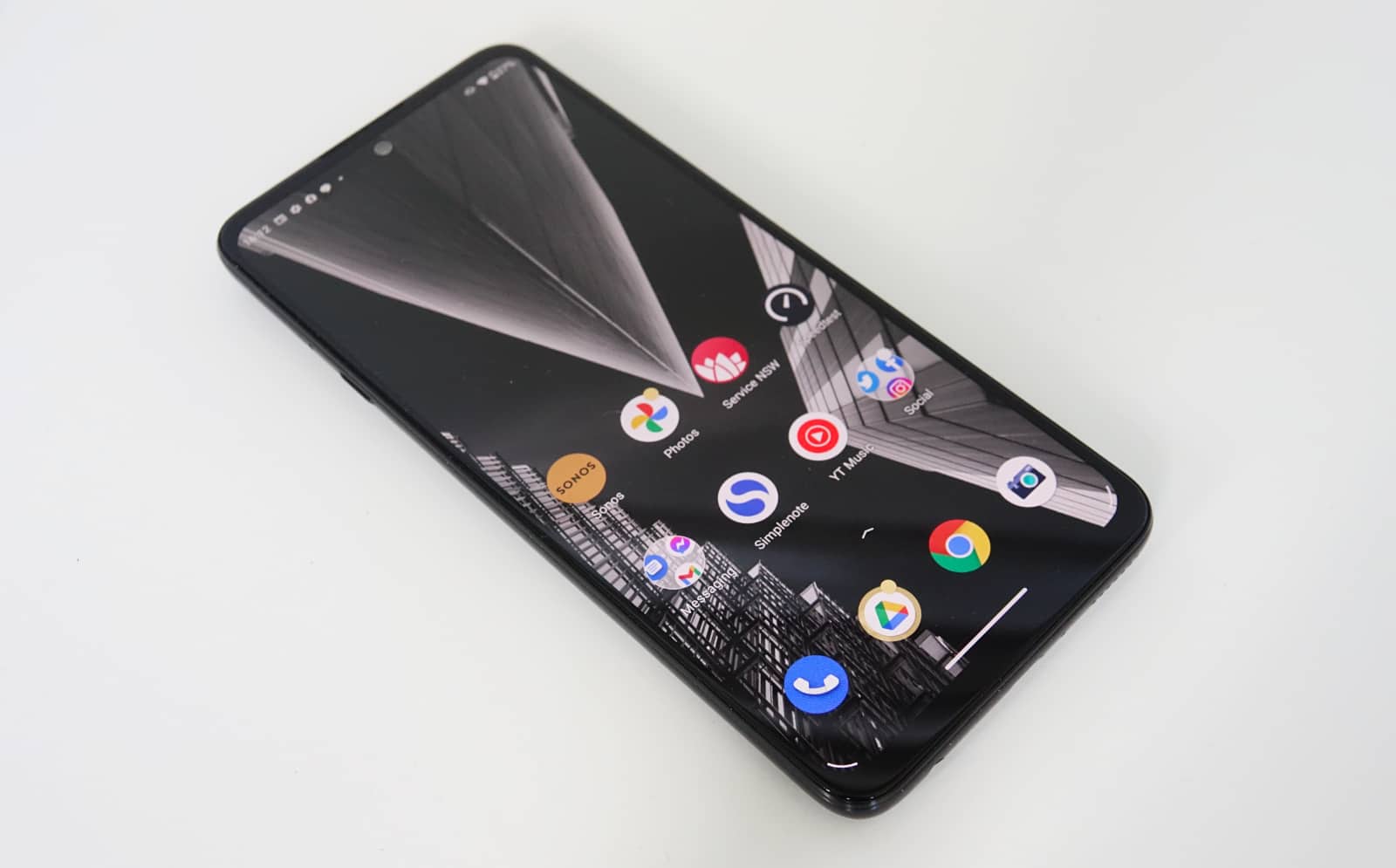 If you don’t mind being patient and waiting for the camera to do its thing, the Moto Edge 20 Fusion is a surprise simply because of what it does and where it sits.

Motorola has already proven it can make a startlingly good mid-range 5G phone, but the Edge 20 Fusion improves on that again. This is 5G and more at true value.

While the camera could be improved, if you don’t live from day to day in the camera in your phone, you’ll easily get by with the big screen, big battery, and big feature set in the modestly priced Moto Edge 20 Fusion. Surprisingly recommended. 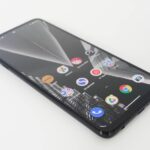