They look a little like the AirPods, but they’re also not, and they’re not even the same price. Arriving from a different brand, you’d be excused for thinking these similar earphones were from an Apple from an alternate universe, except they’re not.

You see, Apple isn’t the only maker of a pair of earphones that looks like the AirPods. Skullcandy offers a set in the Indy ANC, and brings noise cancelling for less the Apple’s own.

At around the $250 mark, Skullcandy’s take is an interesting option, offering some decent sound and a custom ear tweaking app amidst rather complex controls, to boot. You’re not paying as much as Apple’s own take, or most other brands, either. Is the trade-off worth it, and are the Skullcandy Indy ANC worth your wallet? 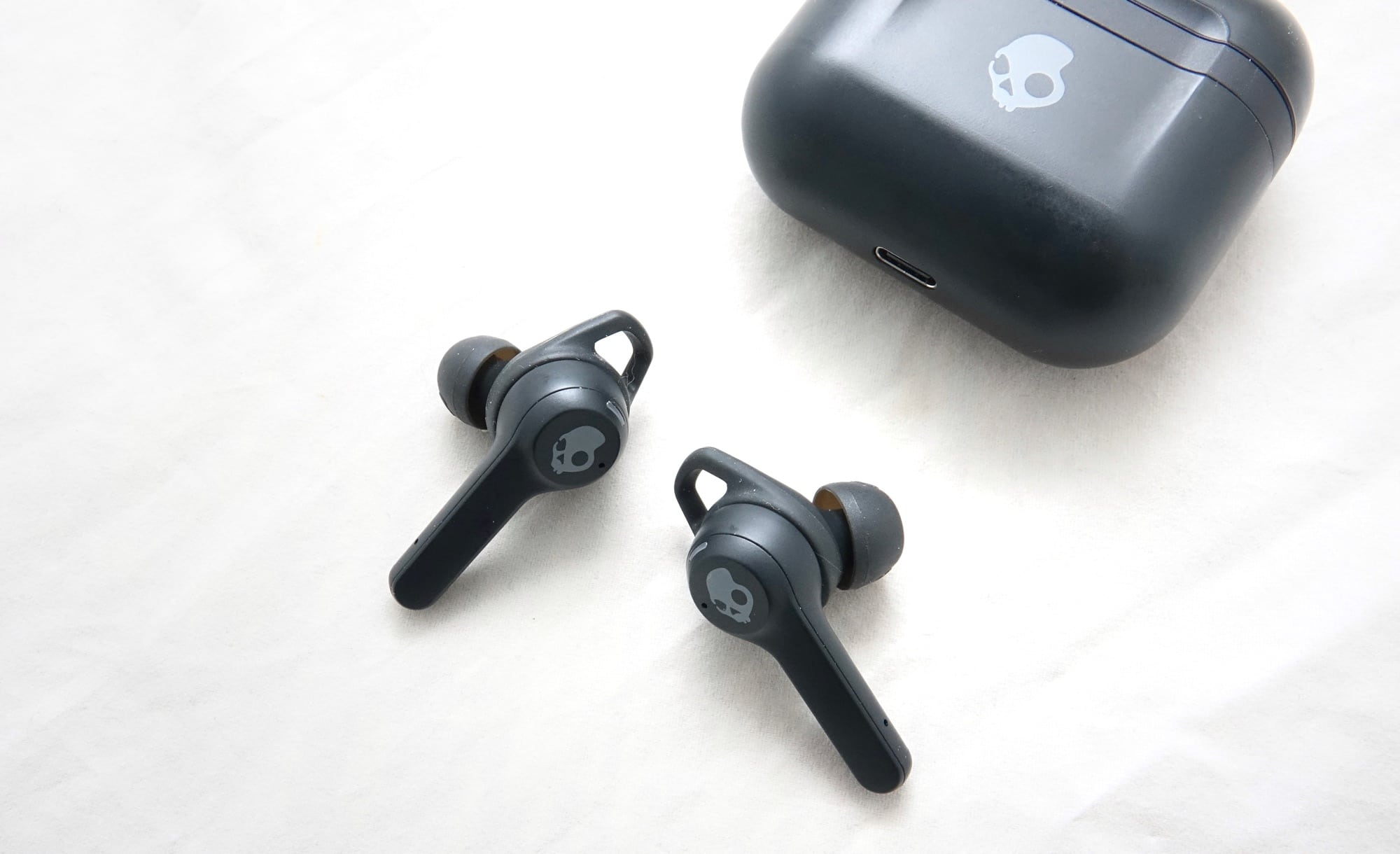 We’ve already kind of given away the design, so you probably know what’s coming, but if you’ve ever seen the Skullcandy Indy earphones before this — or you’ve Googled for a Skullcandy Indy ANC review — then you know roughly what to expect: the Indy ANC look a little like a distant cousin from the Apple AirPods, complete with a similar design of the stalk that comes from the earphones.

It’s a familiar style and one practically heralded by Apple, because earphones don’t have to look this way. Apple invented this approach with the AirPods, while other truly wireless earphone brands typically opted for options without the stalk hanging from the earphone itself. We typically see both now, though, because choice is good in general.

Skullcandy’s Indy ANC doesn’t break the design approach too much, changing the colour for something darker and more moody — black, not white, though they also come in pink — and using the Skullcandy skull logo on each ear piece, while also making Indy ANC earphones with tips and holding stabilisers, rather than earbuds like Apple uses. That means the Indy ANC will fit more ears — because not everyone likes an earbud! — and may provide a firmer seal for the active noise cancellation being introduced in this generation of the Indy earphones.

Much like every other pair of truly wireless earphone, these come with a rechargeable earphone case, which itself can be charged from either USB Type C or a wireless charger.

The Indy ANC earphones are rated for IPX4 sweat and water resistance, which isn’t much, but should be enough for a light walk in the rain if it happens randomly, and arrives with an app to let you tweak the sound to match your ears. Support for Tile’s tracking technology is also thrown in, meaning you should be able to keep track of where your earphones are, even if they fall out of your bag (provided you’ve registered them with your account in the Tile app). 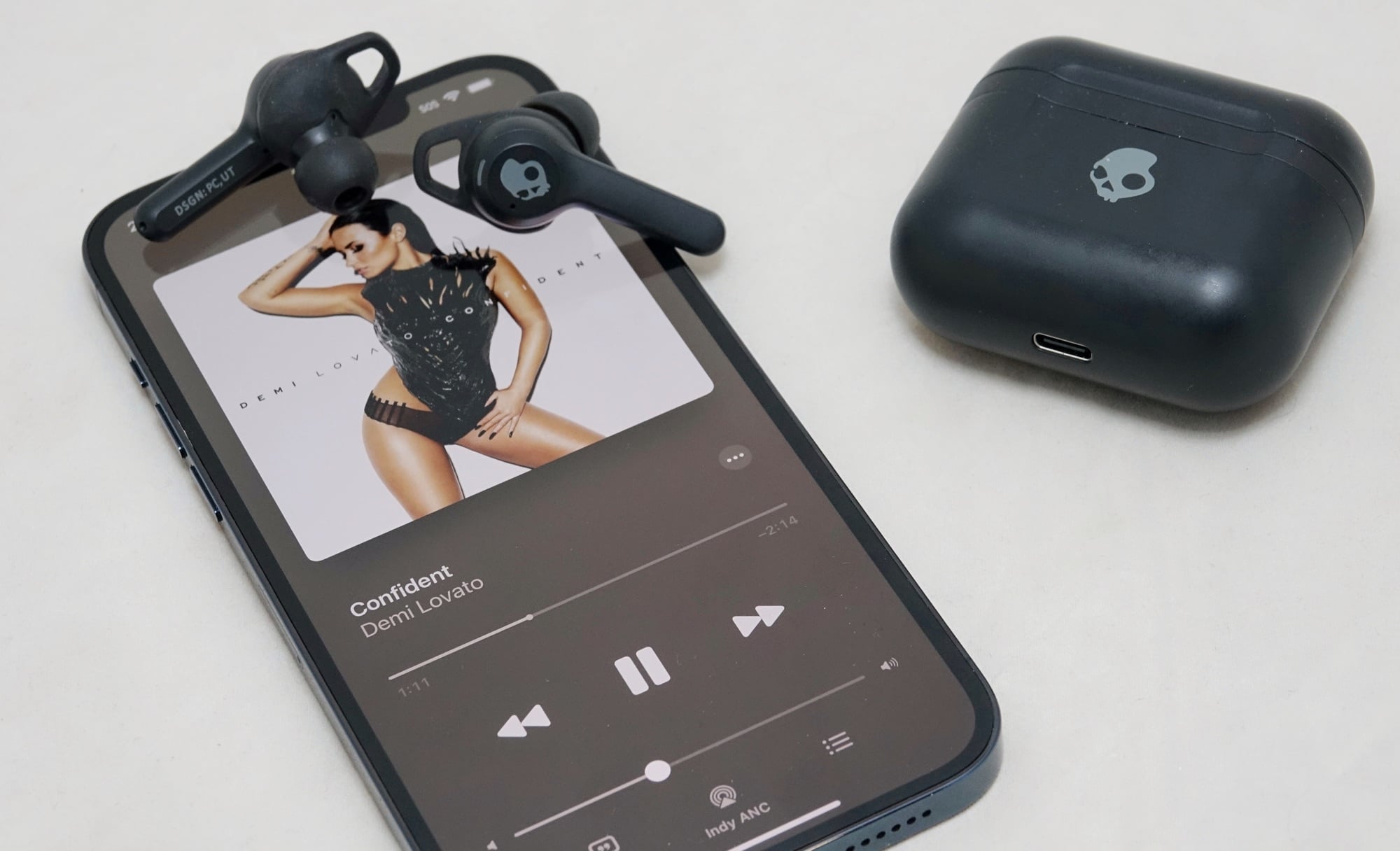 While the design may make you think of a pair of black AirPods with an added pair of earphones, the controls aren’t quite like what Apple has crafted.

Even though the touch panel is pretty obvious on the circular sections of these earphones, Skullcandy has opted for some options that made us go back to the in-app menu repeatedly to work out just how in the blazes these things worked. Several times. We actually forgot them more than enough, quite possibly because they just didn’t make sense.

Here’s how they work: playing and pausing consists of tapping either side twice, but moving a track forward or backward requires a tap on the right side or left side respectively for two seconds. If you want the volume up or down, you need to tap the right side and left side respectively once each time, but do it too quickly, and you’ll move a track forward or backward. If you want to trigger your phone’s voice assistant, tap the control pad three times on either side. Do it too slow, and you might end up skipping a track. Heaven forbid you want to turn noise cancellation on or off without the app, because then you tap either side once and hold for two seconds. If you accidentally tap it twice and hold for two seconds, you won’t change the cancellation mode, but rather the equaliser mode.

Like we said, it doesn’t make much sense sense, and the whole thing is a bit of a mess. We’ve never had to check the instructions to frequently for controls in our lives, and they may actually offer a worse set of controls than the Oppo Enco W51, a brilliant pair of wireless earphones marred by problematic controls. 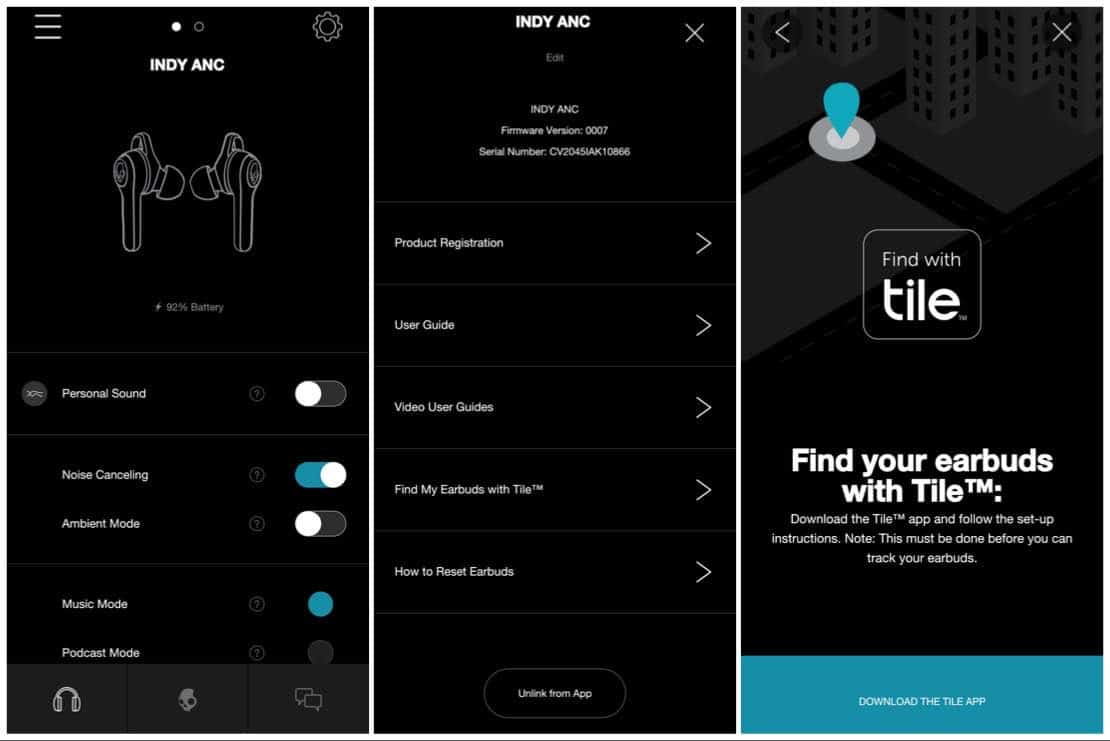 Fortunately, the Skullcandy app includes the controls on tap in a built-in manual, and that turned out to be our saving grace for adapting, while also scouring Skullcandy’s site for the in-box manual. But honestly, Skullcandy could have made the entire process much easier with less complex controls.

At least the app is easy to use, and we’d suggest you use that instead for anything the one- and two-tap controls for volume and pausing.

The performance would have to be better than the controls, so let’s get stuck into that now.

Testing the Skullcandy Indy ANC with the Pickr Sound Test — which you can listen to yourself — we found the earphones were nicer than we expected, with enough of an overall balance for many, though a little more in the bass than we typically like.

Given that Skullcandy typically targets younger listeners, a push into bass isn’t totally unexpected, and we found the electronic of Tycho and Daft Punk showed the mids were a little sparse, basically being a show of highs and lows. That’s not a bad thing, just a personal preference thing, with the bottom end leading in more or less any track we played.

In Charlie Puth’s “Done For Me” and Maroon 5’s “Animal”, the bass delivered a bit of a heavy-handed bottom end, alongside noticeable highs, and acceptable mids. However the bass doesn’t often read as detailed, and lost the guttural bottom end in FKA Twigs’ “Two Weeks”. 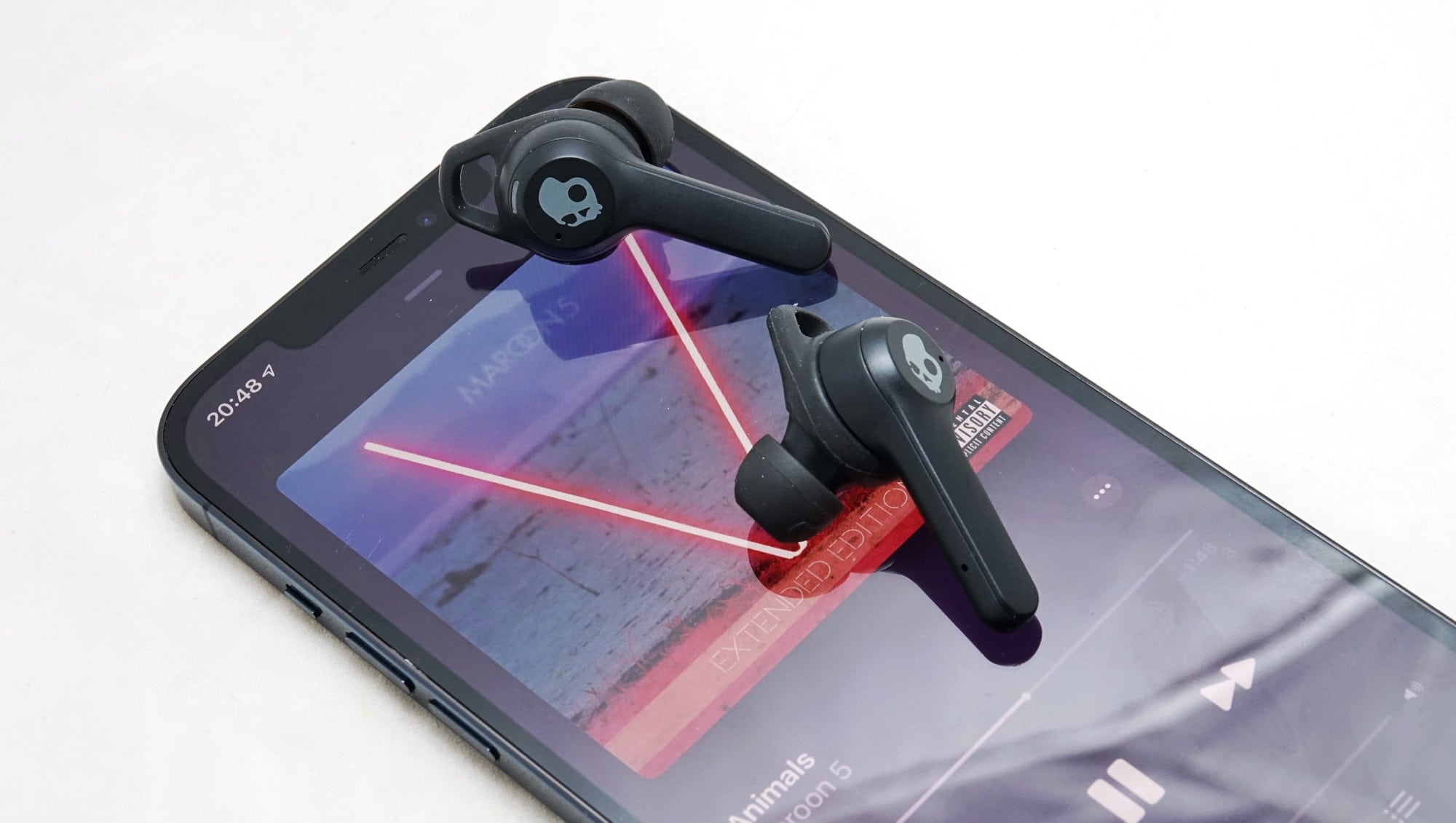 Overall, it’s a good sound, and will be more than acceptable to many, but it could be a little better. Frankly, it could be more detailed.

It’s good, but not amazing, and the same can be said for the noise cancellation, which doesn’t take on any of the adaptive tech we’ve seen in headphones lately, but instead opts for noise cancelling being “on” or off”.

To Skullcandy’s credit, there’s a fair amount of volume to work with, as we were quite comfortable below the 50 percent volume mark, sitting with happy ears at around 35 to 40.

Skullcandy also includes a custom ear profile mode which applies small changes to the sound based on the sounds you can hear. Overall, it’s reminiscent of what Australia’s Audeara did with its first pair of noise cancelling headphones, delivering a headphone that could change its sound based on what your ears could hear. It’s a neat inclusion, and one that basically caters headphones towards individual listeners, and not just people on the whole. 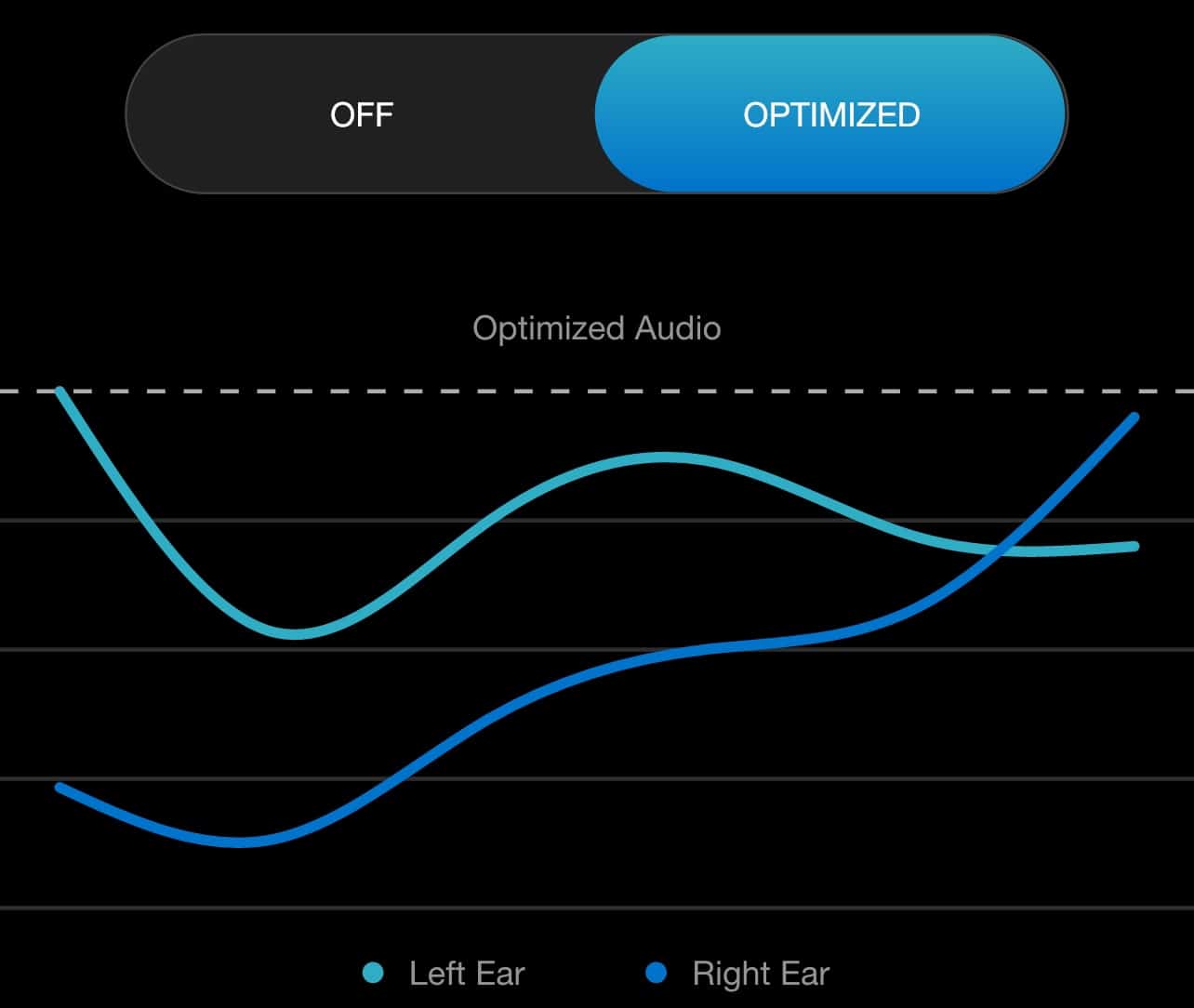 One area beats the rest, though, and that’s the performance, which is an area that makes the Indy ANC easy to consider in their own right.

Essentially, there’s plenty to offer in the battery department, with nearly 20 hours in total with active noise cancellation switched on, and a good 12 hours more when ANC is off.

We doubt you’ll want to use the earphones without cancellation, even though it’s definitely an option. Frankly, once you’ve listened to headphones with cancellation — even the ordinary cancellation that the Indy ANC offers — it’s hard to go back. Ask a reviewer. :)

However if you’re trying to get the best battery, switching off ANC is the way to do it, and that will give you a lot of juice, more so than a pair of $250 wireless earphones might typically warrant.

At a little over $250, it’s pretty clear Skullcandy is looking to beat Apple at its own game with the Indy ANC, which are a clear move to play on the standard AirPods with the wireless charging case, which themselves cost $319, while Apple’s ANC AirPods Pro cost $399.

Granted, you can find both Apple options for far lower than their RRPs in-store and online, and Skullcandy is competing with Oppo’s Enco W51, Jabra’s Elite 75t, and to an extent, both Sony’s WF-SP800N and the getting-on-in-age WF-1000XM3 earphones. However for the price, the $259.95 isn’t bad here. Look around, and you might even find them below that. 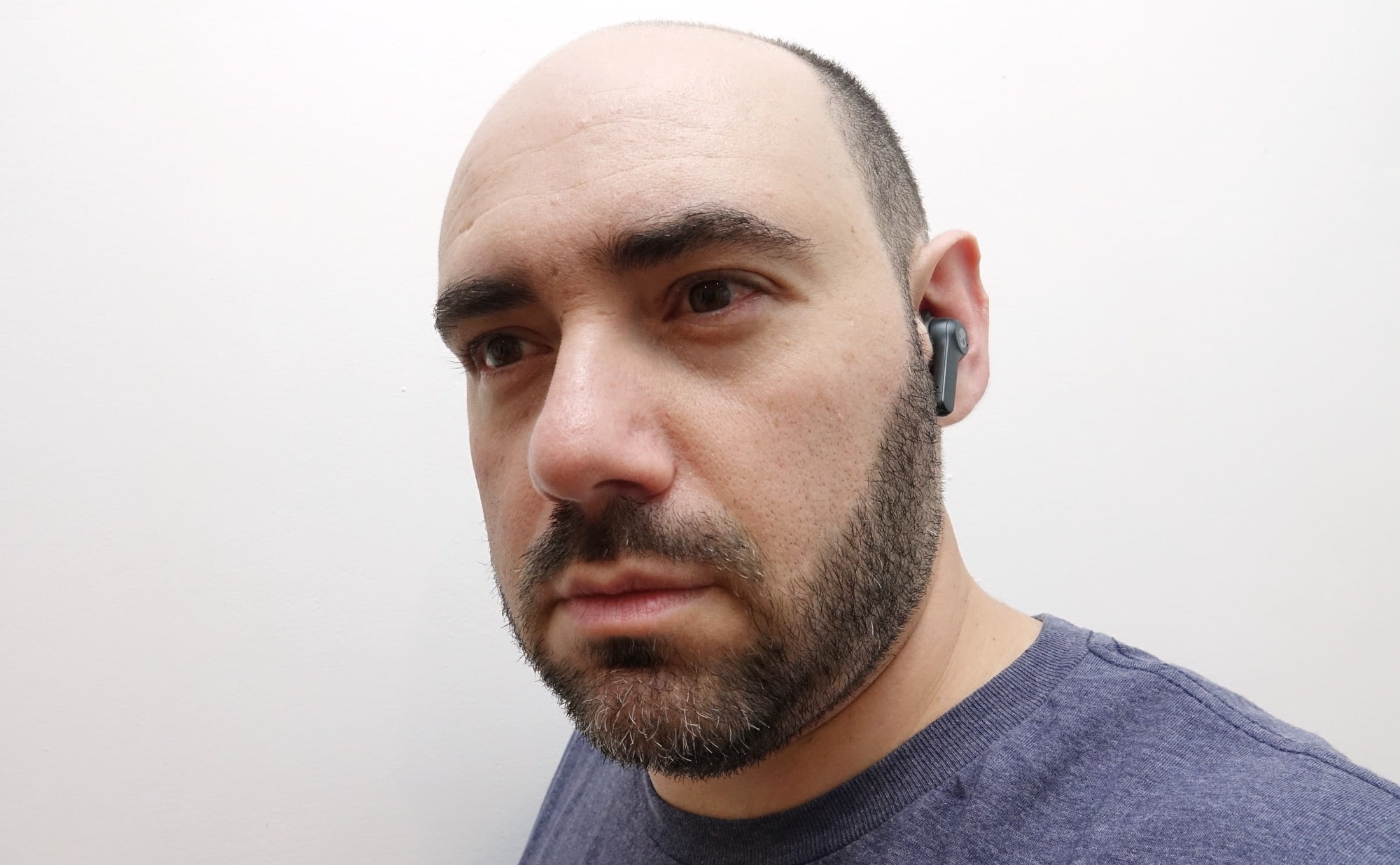 Beyond disastrously weird controls, the noise cancellation could be improved slightly. In the past couple of years when we’ve looked at Skullcandy noise cancelling headphones, that has always been one of the weaker parts of the package, and here in the Indy ANC, that still holds true.

Simply put, while the noise cancellation of the Skullcandy Indy ANC does the job, it doesn’t do a tremendous job overall, and comes across as a little basic. We’ve probably been spoiled by other noise cancelling earphones, but these could do with a little more to the cancellation than simply “off” and “on”, which is basically the choice you get here.

To most people, we suspect that would be enough, but given the way cancellation is evolving, there’s more Skullcandy could have done. At least you get something, which is a win.

The other issue worth mentioning is the fit, which can be a little difficult at times. Granted, it doesn’t come with the same problem as standard AirPods, as they’re either a “love it or hate it” mentality. As earphones, the Skullcandy Indy ANC get into ears and hold a little better, but they’re a touch bulky and the ear gels might not suit all ears, either. 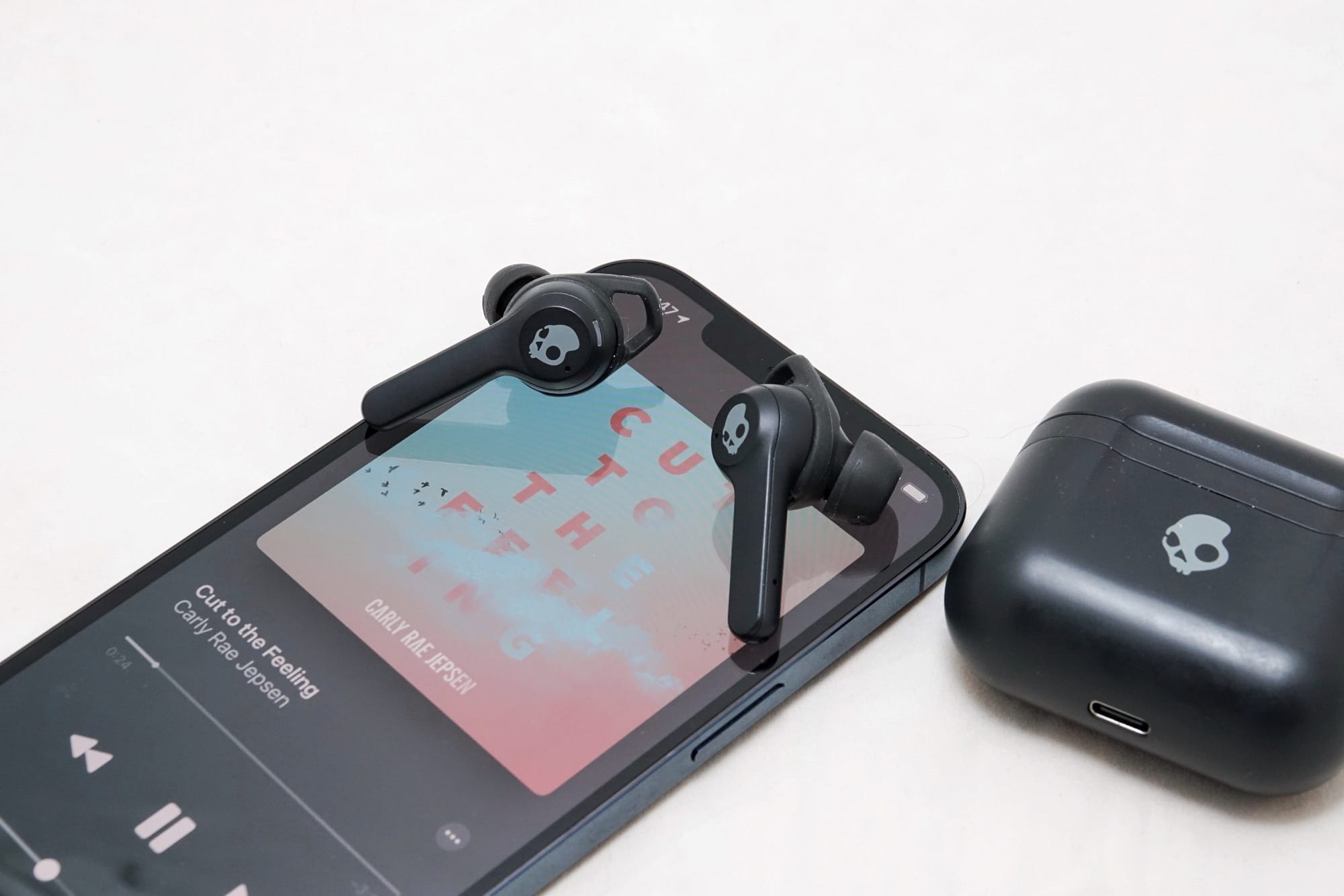 At a little over $250, the Skullcandy Indy ANC offers a decent experience with plenty of volume, and even the ability to find your earphones if they go missing.

For the price, Skullcandy’s offering is like an AirPod Pro, but for less. It’s not quite the AirPods Pro, but definitely striving to get there. And for almost $150 below, that might be enough for some. 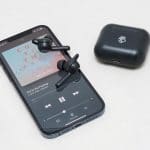