Listening to playlists means hearing the same song over and over again, so which service works best for custom music stations?

It was a weekend when I realised Spotify wasn’t doing what I asked of it. I can’t live without music, and sometimes, I just want to hear music styles in line with an artist I like. You know the feeling if you’ve wanted a specific style, especially if you grew up with Pandora.

For those who missed out, Pandora is a streaming service still available in America based on the concept of “the music genome project”, in that attributes could be applied to songs and styles, with the Pandora music service linking them together. It was a replacement for radio because Pandora’s unique approach to classifying music could meant you merely had to say which songs and artists you liked, and it would not only define the perfect station, but also let you tweak it as time went by.

Even though Pandora was created back in 2000, over 20 years later, music services haven’t quite grasped what the service was doing and made their approaches similar. It’s more the Wild Wild West (wicky wild wild) for music services, where it feels like you’re desperately looking for gold rather than being chased by a mechanical spider.

Unfortunately for Australians, Pandora only appeared in Australia for a short time, appearing in 2012 and then departing some five years later. You can find similar services, but nothing really replaces what Pandora offered, sadly, and it shows.

After hearing the same song for the sixth time on Spotify, I got fed up and decided to try a test. Since we’re paying for nearly every music service, we could test it out and see which streaming service in Australia delivered the best radio service.

At the time, we wanted to listen to a station based on John Mayer, with similar music appearing around him, a request that didn’t seem like rocket science. And yet the world’s biggest service was struggling to deliver more than three hours of music like a real radio station. So who could do it better?

Given the problems started on Spotify, that seemed the fitting place to test it out, with the Spotify app allowing you to select radio stations based on an artist or a song. Yet the term “station” is pretty generous from Spotify’s end. 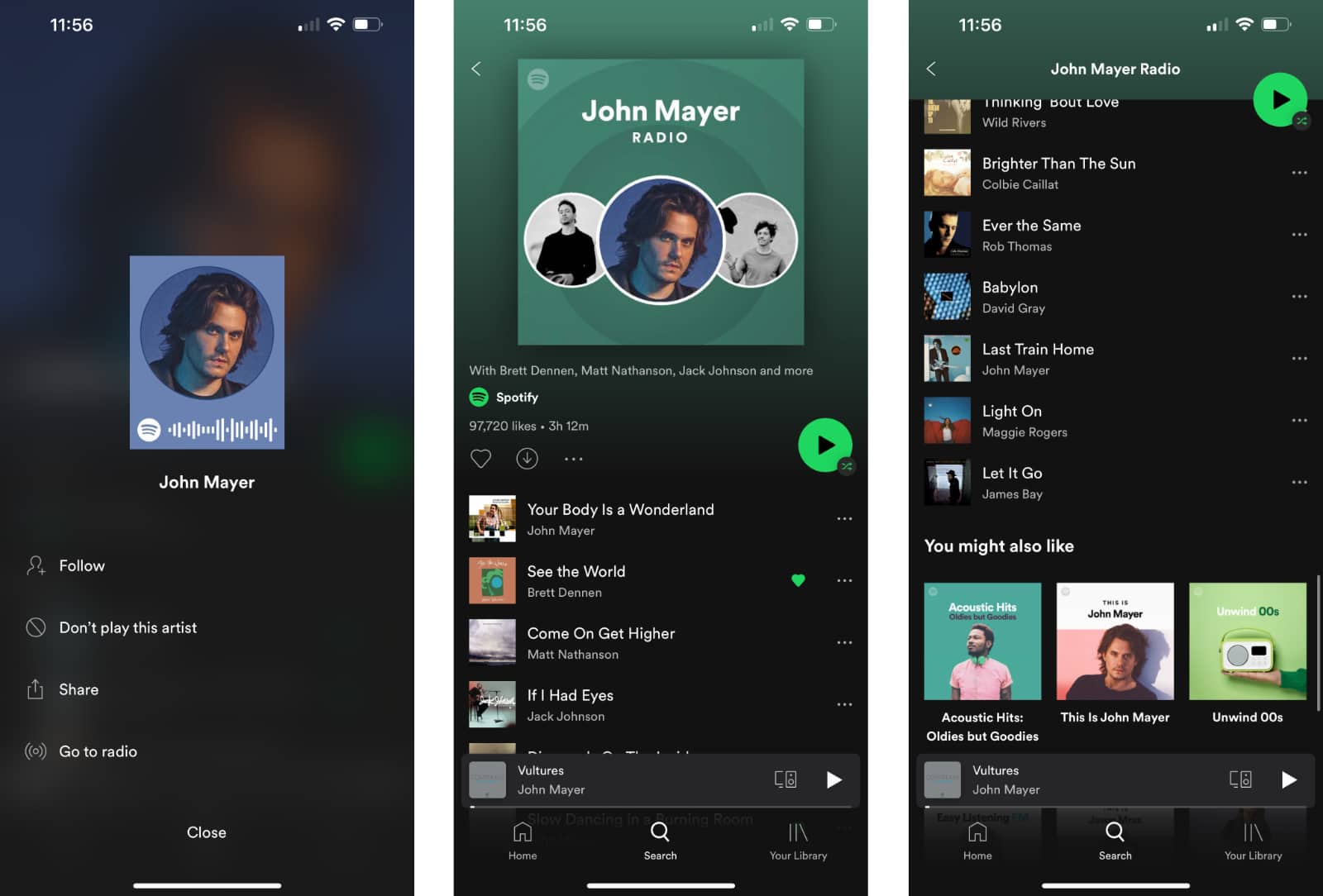 When you select that option, you’ll see a playlist generated, providing you a selection of music in a list, but not one that appears to arrive on the fly. Testing it out on songs and artists, it explained much of why we were hearing the same songs repeatedly, with our John Mayer Spotify station effectively providing a good three hours of music, but not a constantly shifting list of songs.

Perhaps rather handily, both Sonos and Google’s Nest systems let you say which tracks you like, working with Spotify’s favourites system which adds to Spotify’s understanding of the tunes you listen to.

Starting a station on Apple Music is a similar process — find an artist or song you like, and then create a station — but you get a different outcome: rather than a list of songs, Apple is creating a rolling list of tracks like a station would. 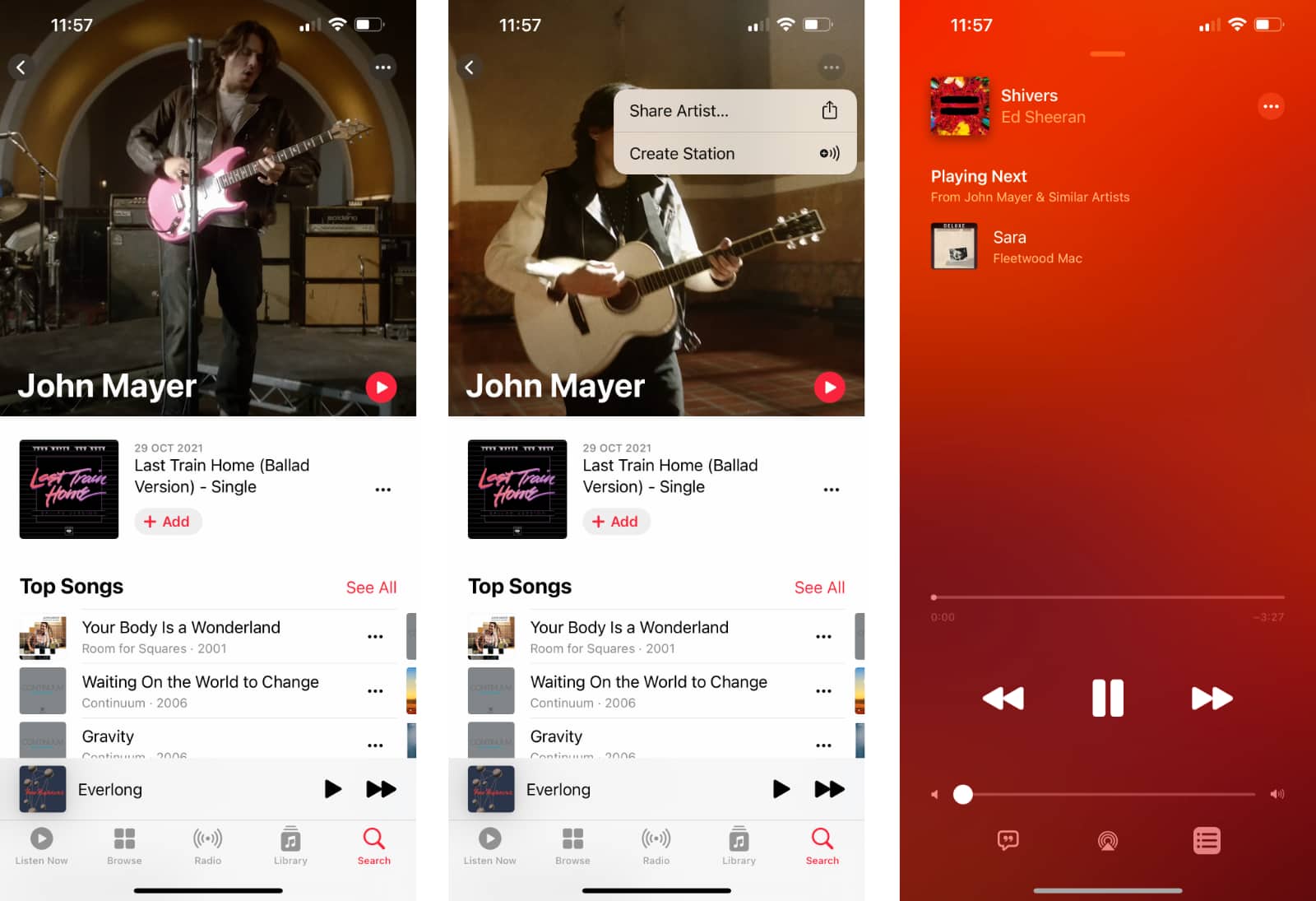 In creating the John Mayer station on Apple Music, we found a track would appear in our list one by one, giving us an idea of what was coming next, but only for one track, and sometimes, we weren’t sure of the connection. While Pandora provided information and context with its Music Genome Project, Apple hasn’t provided quite the same context, and some of the songs don’t exactly match the feel we’re going for, but is it at least more like a radio station.

Unlike Spotify, however, neither Sonos nor Google Nest systems allows you to like or heart a track you’ve heard, meaning it won’t influence your likes or dislikes. You can do it on the official Apple Music app, just not on the connected versions from either Sonos or Google’s own systems.

Another music service you mightn’t have considered, Amazon’s flavour of Spotify offers its own radio service, and it is a little closer to how custom radio services work, though we found its music selection veered off track at times. 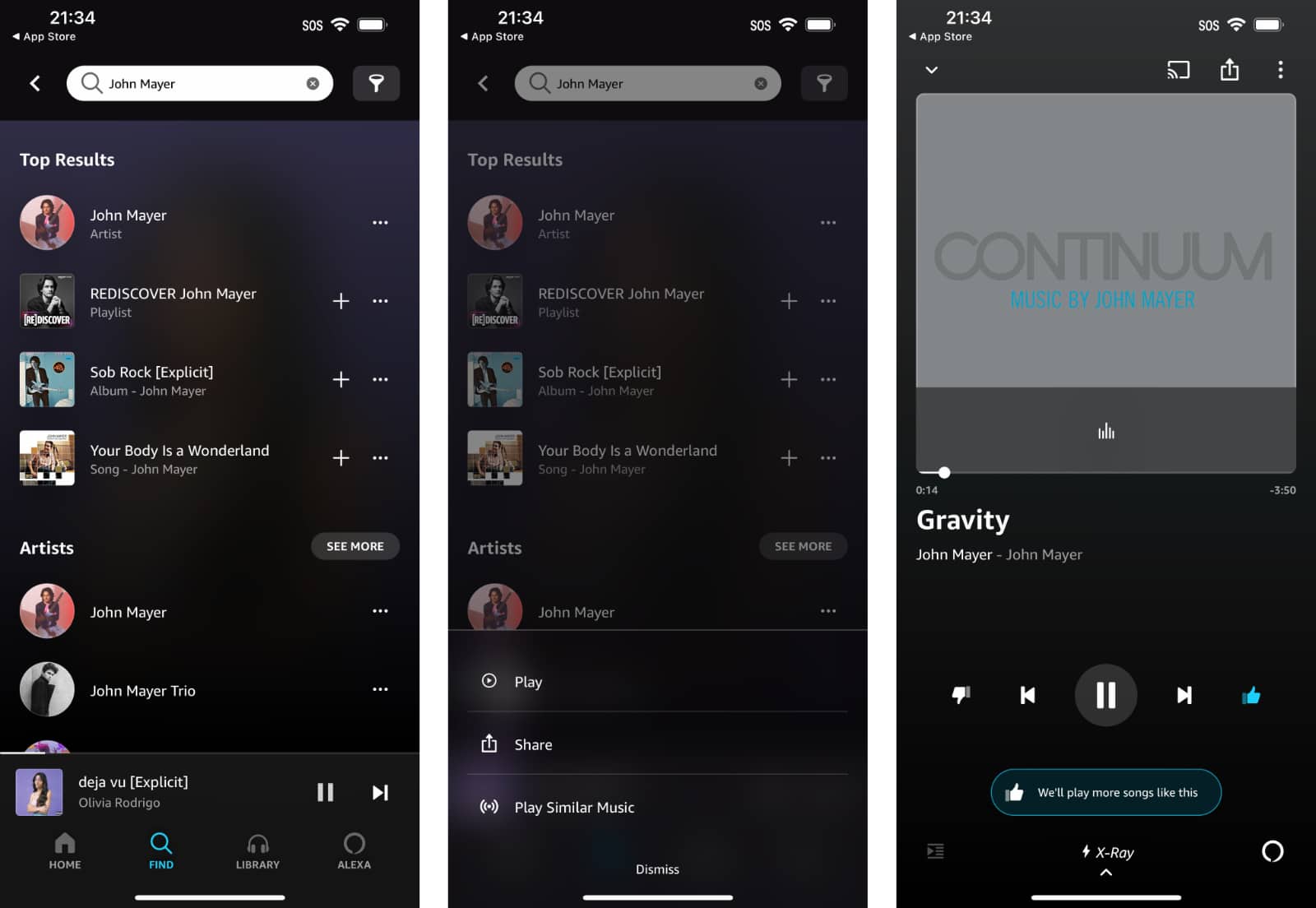 To create a station, browse an artist or a song and press the menu, selecting “play similar music” to create the station. You don’t get that option on a Sonos, instead finding an artist radio station for some artists in the menu, though not all.

Regardless of where you play your music, though, Amazon Music does a decent job of playing back tracks in a long running feed, opting for similar music selections rather than the 3 to 4 hour playlist Spotify goes for. While some of the tracks were a little off from where our musical tastes expected, and out of kilter with every other service, it at least rolled on quite well.

But Amazon Music never gave us a hint of what was coming, making us wait for the track much like a real radio station. That’s less of a positive for us, but each to their own.

Interestingly, Sonos allowed us to thumbs up and thumbs down tracks we didn’t like, though for the ones we didn’t like, Amazon wouldn’t skip it, and we found we had to skip it ourselves. An extra step, to be sure, but one worth pointing out.

Of course, there’s also Google’s own take on music, which used to have an absolutely fantastic streaming radio alternative in Google Play Music. However, Google shut that down in that past couple of years, and now we have the music video-connected equivalent, YouTube Music.

In recent months, we’ve been turned off YouTube Music, as it just hasn’t worked as well as Spotify for music streaming. Factor in that Google’s Nest Hub still doesn’t know how to like a track for its own music service — and yet does for Spotify — and we have very few reasons to keep up our use of YouTube Music.

But in the world of artist stations and song-based stations, YouTube Music actually has the edge, and that surprised us incredibly. 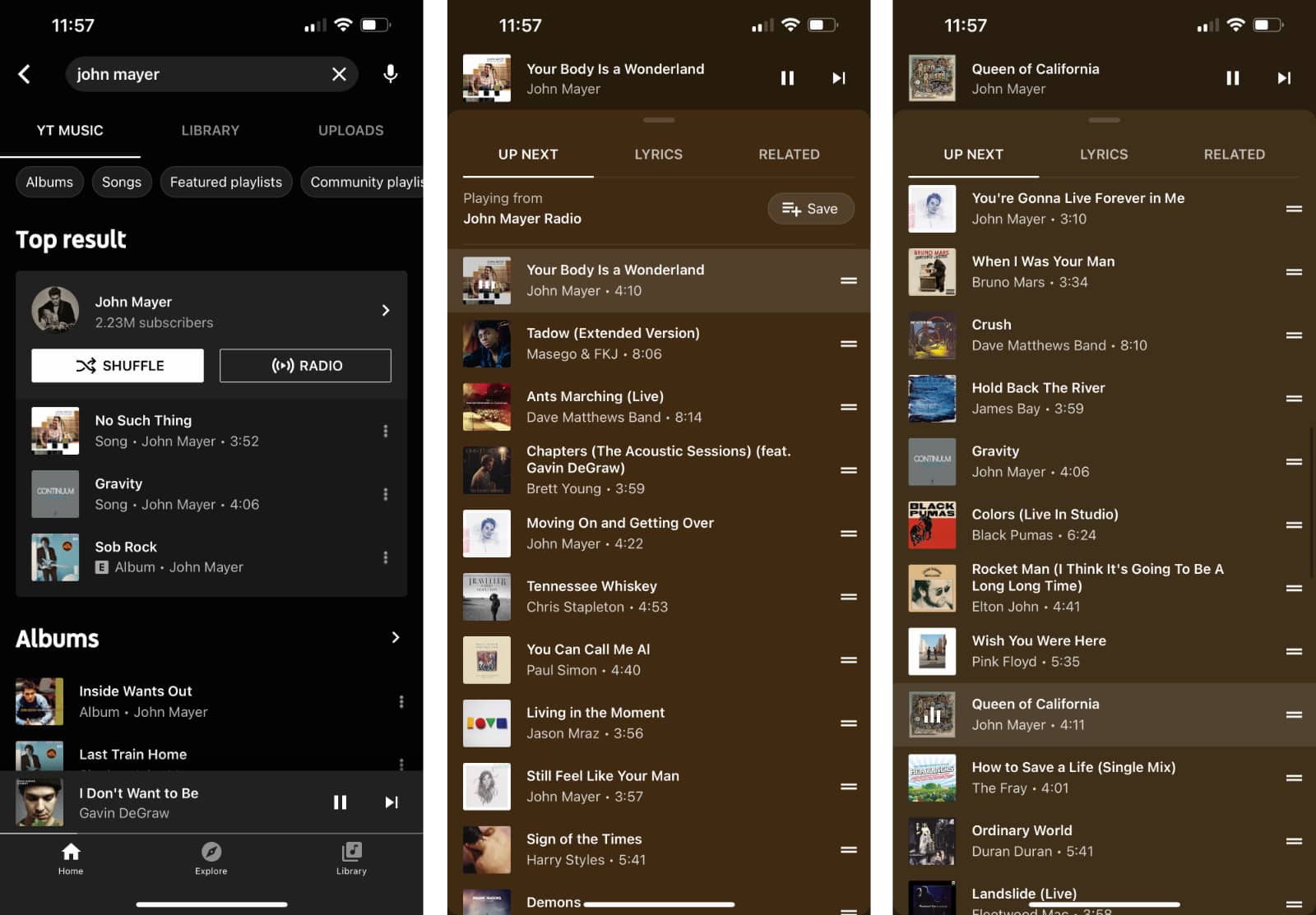 Tested again with John Mayer, not only did YouTube Music provide an actual list of similar music tracks, it also constantly added to itself, continuing a radio station past the three hour mark, something we struggled to get Spotify to do.

As such, when we ran our YouTube Music station through Sonos, we didn’t hear the same track selections as we did on Spotify, and instead veered off into song choices we hadn’t heard in years and felt more like a proper customised station than what Spotify was generating.

Granted, YouTube Music still has struggles with its like and dislike support on devices, and neither Sonos nor Google’s own Nest smart speakers and Nest Hub displays could actually like or dislike a song on YouTube Music, stunning given Google owns YouTube, and yet hasn’t factored this in.

However, it’s pretty clear YouTube Music’s station has delivered the widest assortment of music thus far. It’s not Pandora, but it managed to get bloody close. Now if only we could tweak the list and favourite using our own likes and dislikes.

Which music service does custom radio stations best in Australia?

After testing the assortment of music services in Australia, the one we found that did the best job was YouTube Music, which surprised us greatly, and made us rethink whether we’d be cancelling the service overall.

In second place, is Apple Music, followed quickly behind by Amazon Music, only because Apple gave us a glimpse of what was coming, while Amazon, well, didn’t.

Out of the four services, we actually found Spotify’s custom radio service seemed to be the least impressive of the bunch, thanks in part to how it was providing a set number of songs in a playlist. That’s not quite what we were looking for, and meant after a few hours, you were bound to hear the same song eventually.

And sure, hearing the same song is largely what radio has become known for, but on-demand music has the potential to be better and should be. At least we’ve found a service or two that can, even if it’s not Spotify.