How smart lights can make us feel warm, why Apple can make you feel healthier, and three short reviews on a feel-good Wrap.

For the middle of November, this is The Wrap, a more proud and positive Australian round-up to technology than ever before, and after a successful November 15 where the country celebrated two major achievements — a Yes vote on Marriage Equality and the national soccer team scoring the rights to go to the World Cup — we’re feeling super positive, so let’s talk good news.

Philips has recently tried something creative, launching its Hue Ambience lights with a bit of research, discovering that more Aussies than you might think are afraid of the dark, even if light isn’t far away.

Lighting can change everything, though, and Philips recently added lighting to Manly’s Quarantine Station, one of the most haunted buildings in Australia, and then let a couple stay there without telling them.

The moral of the story? If the lighting is good and can be activated and warmed up without telling, people will think it’s as natural a warmth and comfort level as at home.

Meanwhile, if you need a bit of feel good from something made to make you actually feel good all over, Apple has launched its GymKit technology, a unique concept that links an Apple Watch to gym machines to synchronise exercise routines.

Interestingly, Australia is one of the first places in the world to get this technology, applying it to select treadmills, indoor bikes, and stepping machines, thereby providing a little bit more about your health to an Apple Watch in the process.

That means if you regularly take to a gym — in this country, a Fitness First gym — you may find Apple GymKit-enabled cardio equipment inside, potentially letting you track those exercises on your watch from the machine to the watch.

Locally, you will only see this at Fitness First to start with, but if you are excited and your gym doesn’t have it, it’s time to start talking to management.

Next we’re making our way into reviews, because as the year shifts into that period where products are out for the holiday season, we are getting stuck into lots and lots and lots of reviews.

This week, those reviews included a new pair of headphones on the cheap and an eReader that wasn’t quite as cost effective, but both were very good, so let’s talk about them.

First there’s the budget earphones, and they come from an Australian company, so we get a little bit of national pride in there for good measure.

You may not have heard of AudioFly, but the Perth-based brand has been around for a few years, mostly catering to professional grade in-ear monitors.

This year, the company intends to make itself known to more customers with some relatively inexpensive wireless earphones, an area that is making a real dent on the market, especially as more phones ditch the 3.5mm headset jack, and AudioFly’s least expensive pair is the AF33W, a wireless version of its AF33 that also pack in some surprising features.

You see aside for them being a little under 60 bucks, they also pack in support for the high-grade aptX sound technology, not to mention a bit of sweat resistance, but most notably, they actually sound really, really good. There’s a good amount of depth and spatiality, the definition is clear, and while the mids are lacking a little in comparison to the highs and lows, the AudioFly AF33W sound very, very good, especially for that budget price.

Normally we’d expect earphones in this pricing block to be bass heavy or so high-friendly they sound tinny, but the AudioFly AF33W are anything but.

About the only thing wrong with them is a limited few hour battery life and an ordinary design, but they charge on the microUSB standard, so if you do run out of battery, recharging is easily within reach.

Overall, the AudioFly AF33W are an excellent starter pair of wireless earphones.

Next up is a device made for readers, and readers who like to take their hobby anywhere.

By anywhere, we’re talking the beach, the pool, hey maybe even reading in the shower — we won’t judge — because that’s really one of the points of the 2017 Amazon Kindle Oasis: this is Amazon’s first water resistant eBook reader, taking what worked in last year’s Kindle Oasis, increasing the size a fraction, and making it friendlier to water.

That means the 2017 Kindle Oasis works exactly the way it always has, delivering a top notch reading experience emulating the look and feel of paper in a small, light, and thin aluminium-encased design, but it can survive close encounters with the water, too.

You know how you might have to dry off books if they take a jump in the drink? Well the Oasis shakes it off no worries. Just be aware it’s close to $400 for the privilege.

Finally there’s a feel good phone for a feel good price, as Huawei tackles the mid-range with the $500 Nova 2i, a cute metal mobile merging a mostly top to bottom screen with something rather unique, offering four cameras: two on the back and two on the front.

You might call both of those rather premium features, and we sure would, with the long full vision screens part of what’s fueling the respect for Samsung’s Galaxy S8 and Note 8 phones, not to mention of course Apple’s iPhone X. This is like that, only less expensive.

You still get a metal casing and a fingerprint sensor, but you also get cameras made with the soft background portrait mode in mind, making it a surprisingly feature rich phone for its price.

Our quibbles with the Huawei Nova 2i stem from performance hiccups and a little bit of over saturation from the camera, but if you can live with those relatively minor issues, Huawei’s Nova 2i is stellar value at $499, and well worth checking out, making it essentially a cut cost almost flagship, and can leave you feeling all warm and fuzzy on the inside.

You may not feel the same about the end of this show, but sadly, that is where we now find ourselves.

You’ve been listening to The Wrap, Australia’s fastest technology round up. We’ll be back next week for more news and a review or two, maybe three. We certainly did today. Until then, we hope you have a tremendous week, and we’ll catch you next time on The Wrap. 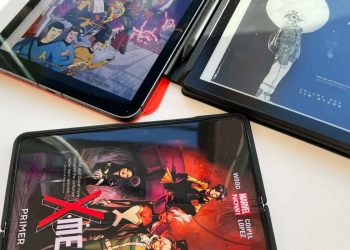