Everyone has a pair of wireless earphones these days, and now so does the maker of cables, speakers, and MagSafe accessories.

There’s no shortage of wireless earphones out there, and we’re seeing more and more manufacturers enter that category than ever lately.

This week, there’s yet one more — at least one more — as Belkin signals that it’s adding an option to the assortment you’ll be able to choose from this year, though without help from some of the audio brands that has helped it in the past.

In 2021, Belkin is releasing a pair of its own truly wireless earphones, coming in SoundForm Freedom True Wireless Earbuds, a portable audio gadget that takes on a more earphone-styled look with tips, though a design that may make you think of another very popular earbud style released by the maker of a very popular line of smartphones and computers.

Without giving too much away, the Belkin SoundForm Freedom True include up to eight hours of play time, 20 hours more of charge in the case, and support for crowdsourced gadget tracking using the Apple “Find My” network, so if they drop out of your pocket or you lose them, you’ll be able to look for where they last were using the Find My app found on the iPhone and iPad. We’re not quite sure how that works with Android owners, especially since Apple’s Find My app is Apple only, so we suspect this is a feature that Android owners will have to go without for the moment.

Outside of the charging and tracking, Belkin is using custom drivers for the earphones that it has designed, and isn’t (sadly) collaborating with French audio outfit Devialet for another gadget like it did last year. Despite this, Belkin looks to keep the tech up there, with noise cancellation on the microphones, IPX5 water resistance on the earphones, and one of Qualcomm’s chipsets (QCC3406), plus wired and wireless charging to keep the earphones topped up when you’re within reach of a cable or a wireless charger.

Speaking of wireless chargers, Belkin has one of those coming to Australia in the coming months, and it will be made with MagSafe in mind. 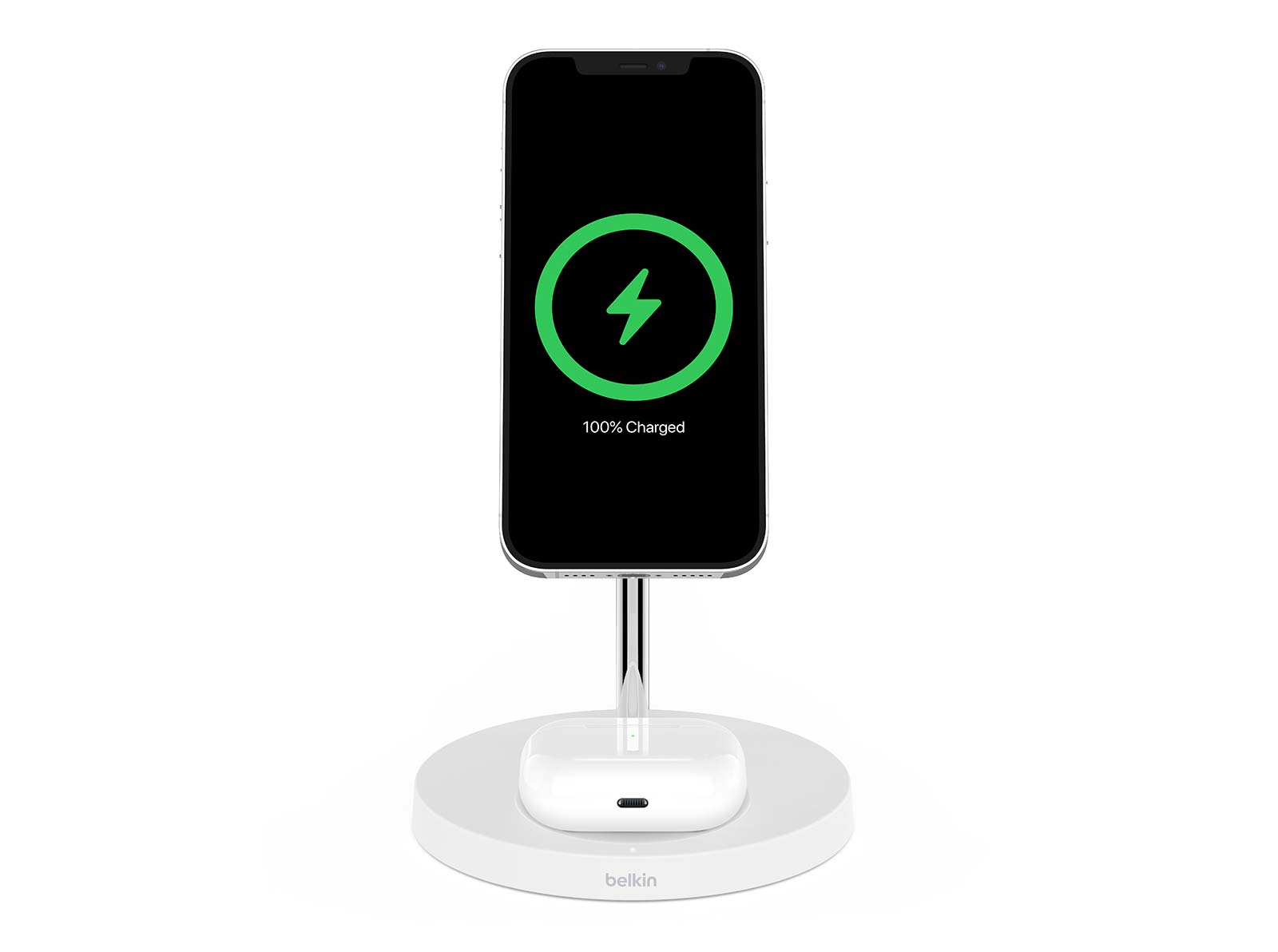 While there are four MagSafe compatible phones around at the moment — the iPhone 12, iPhone 12 Pro, iPhone 12 Mini, and iPhone 12 Pro Max — there aren’t a whole lot of MagSafe accessories, even if there are plenty of cases that aren’t necessarily MagSafe friendly.

This week, Belkin is launching the Boost Charge Pro 2-in-1 MagSafe Wireless Charger, a stand that can hold up a MagSafe iPhone, and also charge a pair of wirelessly charged earphones like the AirPods Pro at the bottom. That charge port at the bottom should charge other wirelessly charged earphones, too, such as BlueAnt’s Pump Air X or the Bose QC Earbuds, but it’s not a spot to charge an Apple Watch, sadly. Unlike the older Boost Up Wireless Charger, that feature appears to be missing in action on this gadget.

The good news, though, is that both of these announcements appear to be locked and loaded for coming to Australia, and in the coming months. As such, the Belkin Boost Charge Pro MagSafe Stand is coming in April for $149.95, while the Belkin SoundForm Freedom True Wireless Earbuds will arrive in Australia from July for the same price, $149.95. 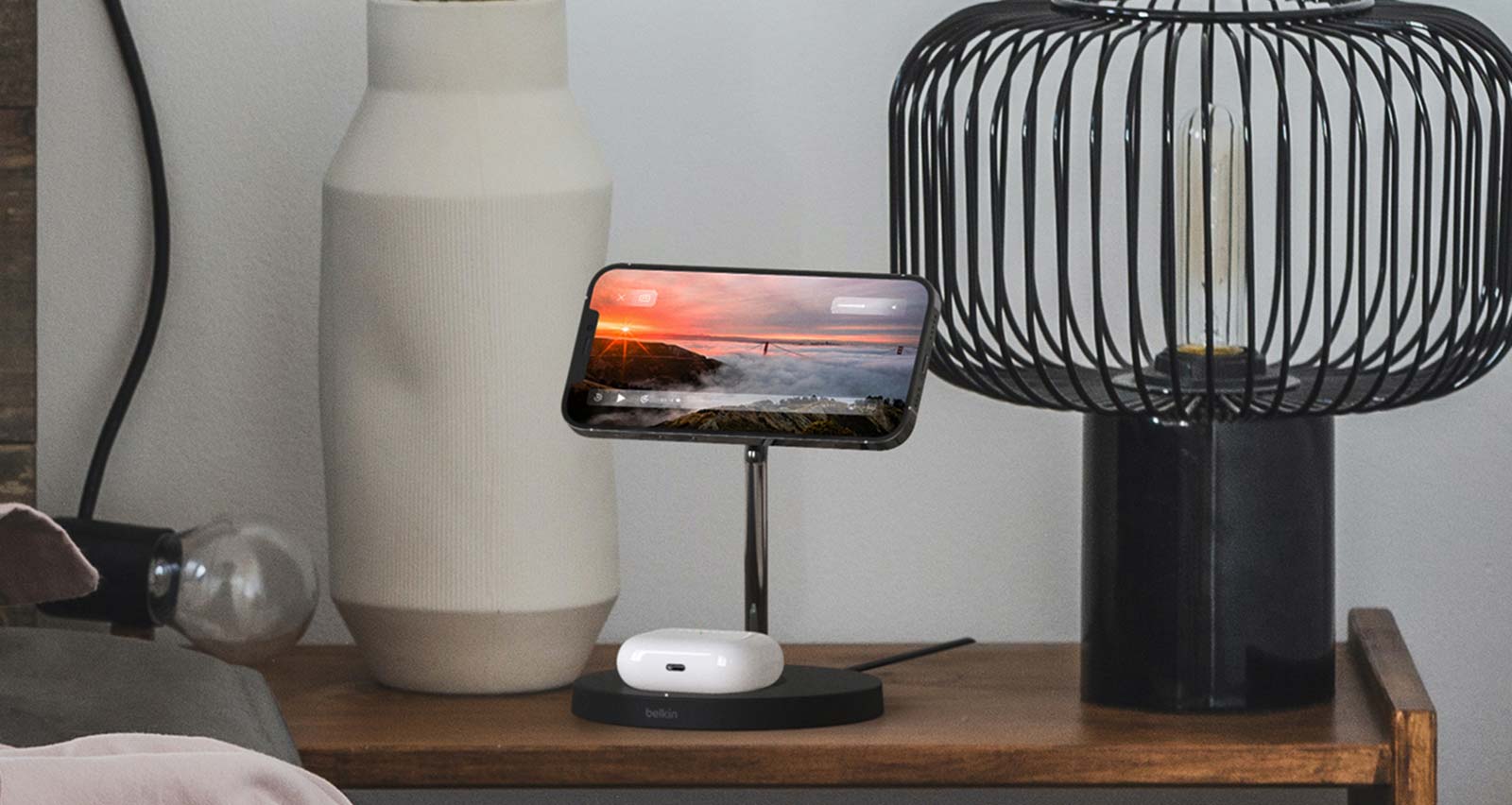