Every man and his dog seems to have a Bluetooth speaker in some form, with wireless speakers available from pretty much anyone and everyone.

Both small companies not known for audio to big companies that more or less specialise in audio have them, and while the quality can vary wildly, the general consensus is that wireless Bluetooth speakers are within reach of pretty much anyone.

Even though companies both big and small have wireless speakers, most seem to share one consistent approach to size: small, and usually not much bigger than a Thermos.

It could be a brick or something cylindrical, but there’s a good chance that if you have a wireless speaker, it’s not much bigger than a water bottle, though can be much smaller, of course. Size matters in wireless sound, and smaller is often what people buy for.

But it doesn’t have to be. You might not be forced into a small wireless speaker if you don’t want something tiny, and Ultimate Ears is showing off something this week made for folks looking for a little more oomph in their speaker. Specifically, UE is targeting folks looking for more boom.

After practically inventing the wireless cylindrical speaker in the Boom years ago, and then upping the volume in the MegaBoom before making a tiny take in the WonderBoom, Ultimate Ears is now venturing into the world of a bigger sound with the HyperBoom, a speaker that loses the cylindrical look and replaces it with something rectangular, boasting a new shape with a new sound.

Bigger than its predecessors, the HyperBoom keeps the omnidirectional sound design of the originals, but delivers three times the volume and six times the bass of the most recent MegaBoom model, the MegaBoom 3.

It is, of course, a little larger, and is more akin to a wireless boom box of sorts, albeit a HyperBoom box, though it’s one that like a traditional boom box isn’t dependent solely on ditching the wires. As such, it includes support for two wireless Bluetooth sources, switching from each fairly quickly, while wired sound can be handled over a 3.5mm jack or even an optical audio port, if you happen to have one of those, such as a port from your TV.

Like Ultimate Ears’ other speakers, there’s support to connect the HyperBoom with the other boom models, supporting Ultimate Ears “PartyUp” mode to link it with either a Boom or MegaBoom speaker, though not the WonderBoom, apparently. That’ll be handy if you opt to share the sound around a bit more, such as if you’re creating a portable multi-room environment.

And like the other Boom models, Ultimate Ears has spent some time making the HyperBoom a little party proof, with IPX4 water resistance, complete with a handle on a corner for carrying. Unlike the other models, there’s actually a USB port included in the design, allowing you to sap some of the up-to 24 hour battery life of the HyperBoom to recharge a phone. 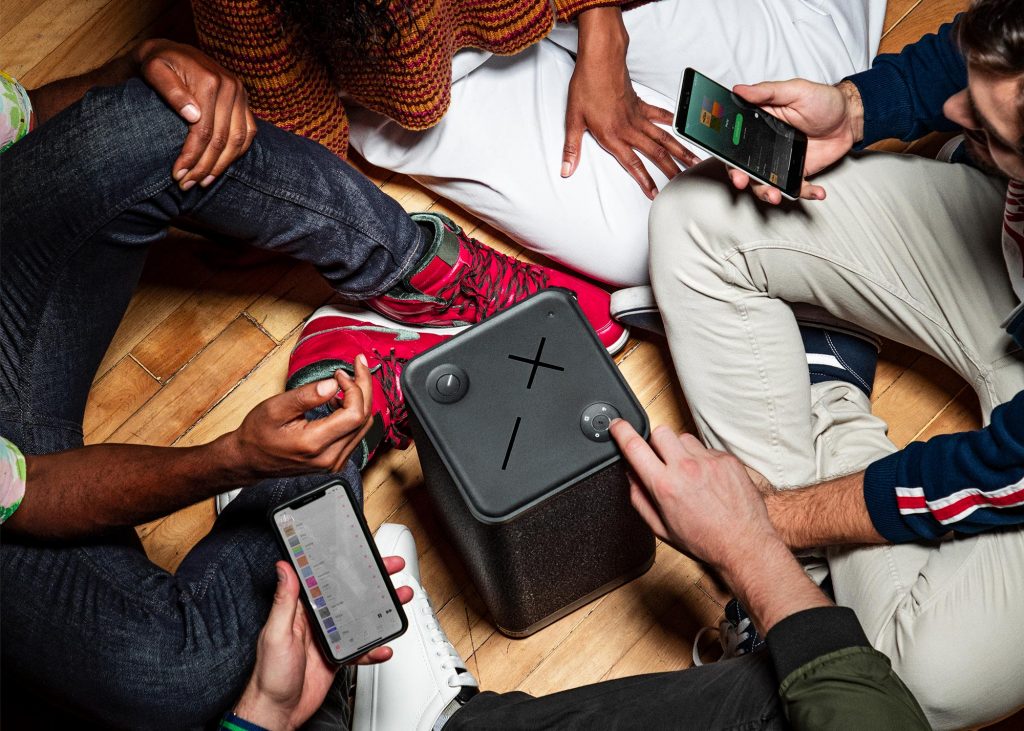 “With HyperBoom, we’re taking our signature Ultimate Ears sound and making it bigger and louder than ever to get whole rooms of people on their feet dancing,” said Mindy Fournier, Head of Product Management for Ultimate Ears.

While the size is clearly one of the points that separates the Ultimate Ears HyperBoom from the rest, another is price, because this thing is not what you’d necessarily call cheap. In fact, you can expect to find the HyperBoom in stores in Australia from early March with a recommended retail price of $599, making it one of the more pricey wireless speakers, albeit one that appears to pack in quite the boom altogether.