Oculus cuts the cost of VR, builds a mobile Rift

The biggest hurdle for jumping into the entertainment world that is virtual reality is cost, but that looks set to change.

Without doubt, one of the strongest reasons to not consider jumping into the intriguing world of first-person entertainment that is virtual reality is that of cost. Simply put, it is so expensive to start.

Let’s look at the options, shall we?

If you take the desktop option, you need the headset, which can cost anywhere between $600 and $1200, and then you need a computer that can drive this. VR-friendly computers are still a relatively new thing, and so regardless if you’re spending on a VR-friendly laptop, desktop, or one of those new backpack-based portable computers, you’re probably spending between $1200 and $4000.

Over on the mobile side of things, you presently need a mobile that can do the VR — so usually something flagship from the past few years — and then the headset itself. Samsung’s Galaxy S6 through to the Galaxy S8 and Note 8 can handle VR, but that means you need the phone and then the Gear VR headset. Likewise with Google’s Pixel and Daydream View VR, as you need the phone hardware and the headset.

That’s the cost of VR: you need a headset and a device to power the headset. It’s not what we’d necessarily call cheap or within reach of most people.

But that could very well change in the near future. 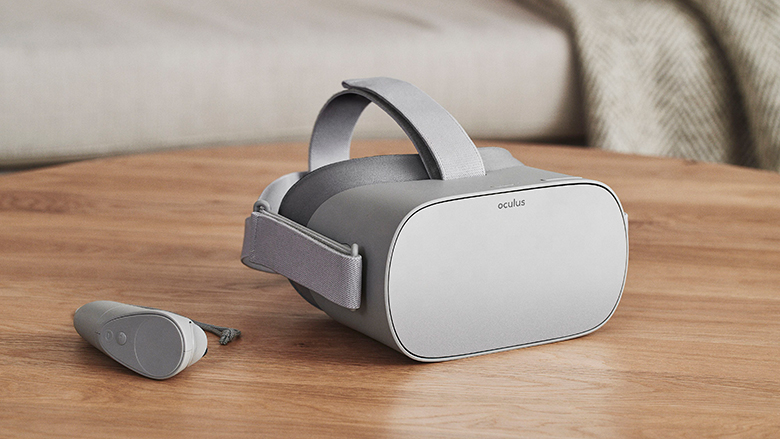 Since announcing last year that it had been working on standalone VR, Oculus is now ready with something to show, announcing Oculus Go at Oculus Connect and setting next year (2018) as the time this one will ship.

Built as a self-contained VR experience, Oculus Go doesn’t need the mobile phone to do its thing because it has the screens built into the headset, with the whole thing retaining Oculus’ style, complete with a new fabric used for the design that is said to be “soft and breathable”, making it good for long term use.

There are speakers built into the headset that will let others hear what’s going on in your headset, though a 3.5mm headset jack will be built in so you can cut off the sound and listen in yourself without disturbing others.

And in a nice twist, apps made for the Oculus Go are compatible with the Samsung Gear VR, so even before release, the mobile Oculus headset already has quite a few apps available to it.

Most impressive is the price, which brings down the cost of VR to $199 USD, suggesting Australia might end up seeing it for closer to the $300-400 mark, which is much less the cost of a phone a $100-200 VR headset dependent on a phone.

We’re told VR controllers will also be a part of the package, and that includes something for use with the Oculus Go, but right now it may not be as there as the full VR Oculus Rift.

In that area, Oculus is working on what it calls its Santa Cruz prototype, with wireless controllers that can be positionally tracked designed to work with a properly mobile computer for your head. A little bit different to the Oculus Go, consider Santa Cruz the full VR experience made to be mobile.

It’s not there yet, and we’re not sure how long until Oculus and owning company Facebook will have something that you can start taking money out for, but until that point, Oculus is also cutting the cost of VR altogether.

Simply put, if you have the computer or are planning to get one that handles VR, you won’t have to spend anywhere near as much for the privilege of jumping into a virtual world.

From this week, the Oculus Rift bundle with sensors, Touch controllers, and six apps and games will drop to $399 USD where it will sit for the unforseeable future.

Australians will see it at $449 USD with the shipping included, making its around $600 converted price much friendlier to people who have already spent a good thousand or two on a computer made specifically for VR. Now that’s a good way to get people over the obvious hurdle.