You no longer need to spend an arm or a leg for a 5G phone, with models for under $500. But which is best?

Ever since mobile makers started finding way of getting the price of 5G down, we’ve been interested.

It started last year with Motorola, LG, Oppo, and Google all finding ways of getting the price down on hardware, culminating in what was clearly the best of the bunch, the Google Pixel 4a with 5G. While it didn’t offer the wireless charging and water resistance of its aluminium cased Pixel 5 sibling, at $799, the Pixel 4a with 5G represented real value, and even offered the same impressive camera combination, alongside that fantastic 5G performance we wanted to see.

This year, prices are falling even further, and the entry-level part of the mid-range has 5G, as well. You can now spend under $500 to get a 5G phone in Australia, meaning that 5G capability needn’t cost much more than a standard mid-range phone. If you’re looking to spend less but still want more, we could see why a 5G phone under $500 could be an attractive proposition.

In Australia, there are no less than five of these, making it hard to pick which offers the best value overall. If they all cost roughly the same, which delivers the best result?

We’ll start this five-way fight off in design, even though it’s not going to be much of a fight for any of them, simply because they’re largely the same.

Regardless of which sub-$500 5G phone you look at, the designs are largely the same, with a plastic body, glass front, camera block, and nothing really remarkable.

They’re all very much a variation on a theme here, and no one single device really excels over another, offering glossy plastic made for a price.

However that price does see different hardware under the hood, showing you that manufacturers have a choice in what they can provide.

The Oppo A54 uses a Snapdragon 480, the Samsung Galaxy A32 5G sees MediaTek’s Dimensity 720U while the Realme 7 5G offers the Dimensity 800U, TCL delivers a Snapdragon 690 in the TCL 20 5G, and the Motorola G 5G Plus gets the same chip from last year’s Moto Edge, the Snapdragon 765 Plus.

Memory ranges from 4GB to 6GB depending on the model you pick, but we’d say out of these, Motorola has the edge followed by TCL, which is in line with the performance we found overall.

The level of hardware is one that makes a dent in performance, because out of the five sub-$500 5G phones we’ve checked out, only two delivered really solid performance.

We suspect this comes from the mid-range 7xx and 6xx chips used in the Moto G 5G Plus and the TCL 20 5G, as well as the 6GB RAM they each offered, but it was enough to ensure the system performance was solid in each phone.

Fortunately, every phone is easy to use, with Android shining on each, even if they’re all not quite up-to-date.

That’s not a major issue altogether, and provided you’ve used a phone in the past few years, you should find the Android versions a cinch.

They all also offer fingerprint sensors in the exact same way: a fingerprint sensor under the power button on the right edge. It’s one of those features that makes it startlingly clear just how familiar the blueprint is between all these devices. 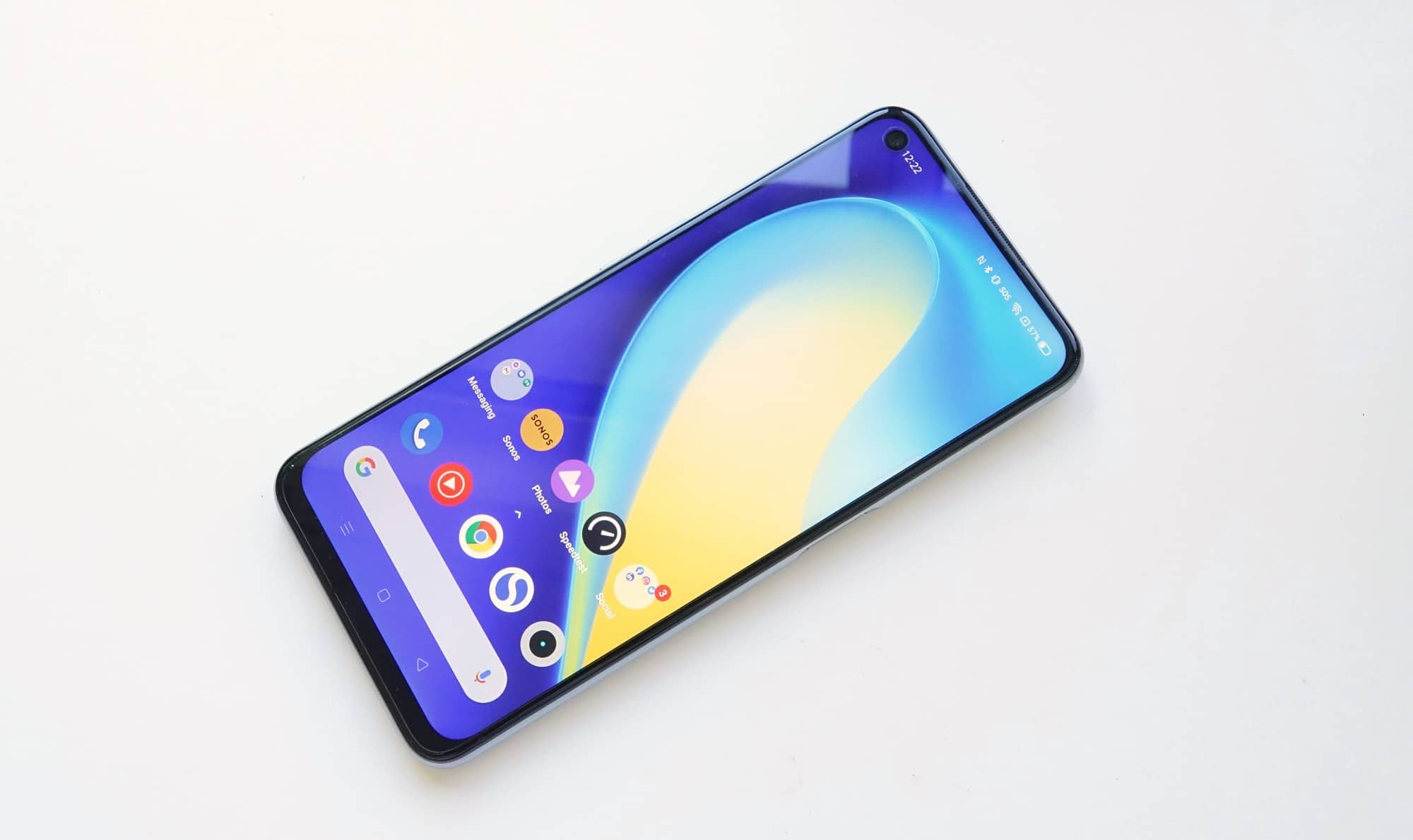 They’re all pretty close here, truth be told, with LCD screens across the range, most of which support a Full HD+ resolution.

The least impressive is from Samsung, which only offers a mediocre HD+ display for its $499 Galaxy A32, while Motorola and Realme both manage to beat it and the other two phones with refresh rates worth talking about.

Motorola offers a 90Hz screen for smooth animations in the Moto G 5G Plus, while Realme’s 7 5G (above) surprises with a 120Hz screen, making it even smoother again. They help to give the winning positions to Realme and Moto for this section.

The one area they all manage to nail is mobile 5G performance, and unsurprisingly as you’d expect in a 5G phone, they all deliver.

We found speeds exceeding 300Mbps on all models, so regardless of which sub-$500 5G phone you look at, you’re definitely getting 5G. That’s a win for everyone here. 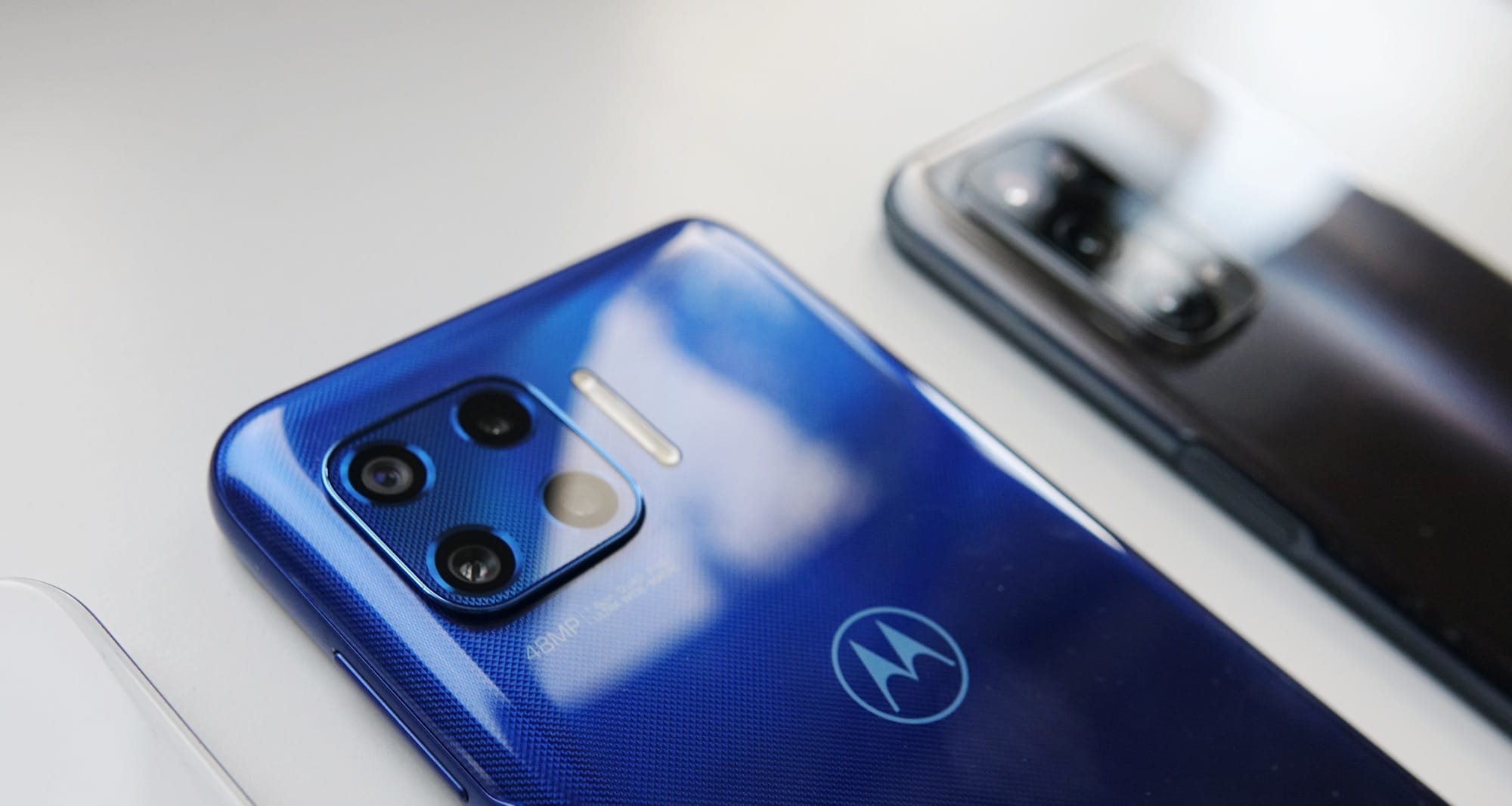 The tie is much the same across the range of cameras in these phones, because much like the fingerprint sensor forming the blueprint, so too can the cameras.

You’ll find a 48 megapixel camera in each, complemented by an 8 megapixel ultra wide, and then possibly a low megapixel macro or depth camera, or both. It’s a pretty consistent approach, with the Realme 7 5G providing something a little bit different with a monochromatic camera, while the Moto G 5G Plus offers a few more megapixels for its macro camera. Unfortunately, none of this changes the game much.

All of the 2021 sub-$500 5G phones we’ve seen offer nice pictures in daylight, and mediocre to ho-hum shots at night. Despite offering more cameras and more megapixels than the single camera $499 4G Google Pixel 4a or the two camera $799 Google Pixel 4a with 5G (which you can possibly find below those prices), none of these mid-range 5G phones stack up to either.

As to which one is better than the other, it’s a clear tie from us. They’re all about the same in terms of how the camera performs: good enough, but not amazing.

Like the camera, the battery provides some sense of consistency, with most of the phones offering a day and a half to two days of life, which is a decent result overall. If you turn 5G off and let the phones go on 4G, we suspect you could get a little more life out, possibly hitting the fabled two days of life if you needed it.

Technically Samsung’s A32 5G achieved a little more, but given the glaring speed and performance problems we found on that phone, we suspect the battery was somehow achieving more from a handset that was also delivering far less performance in general. 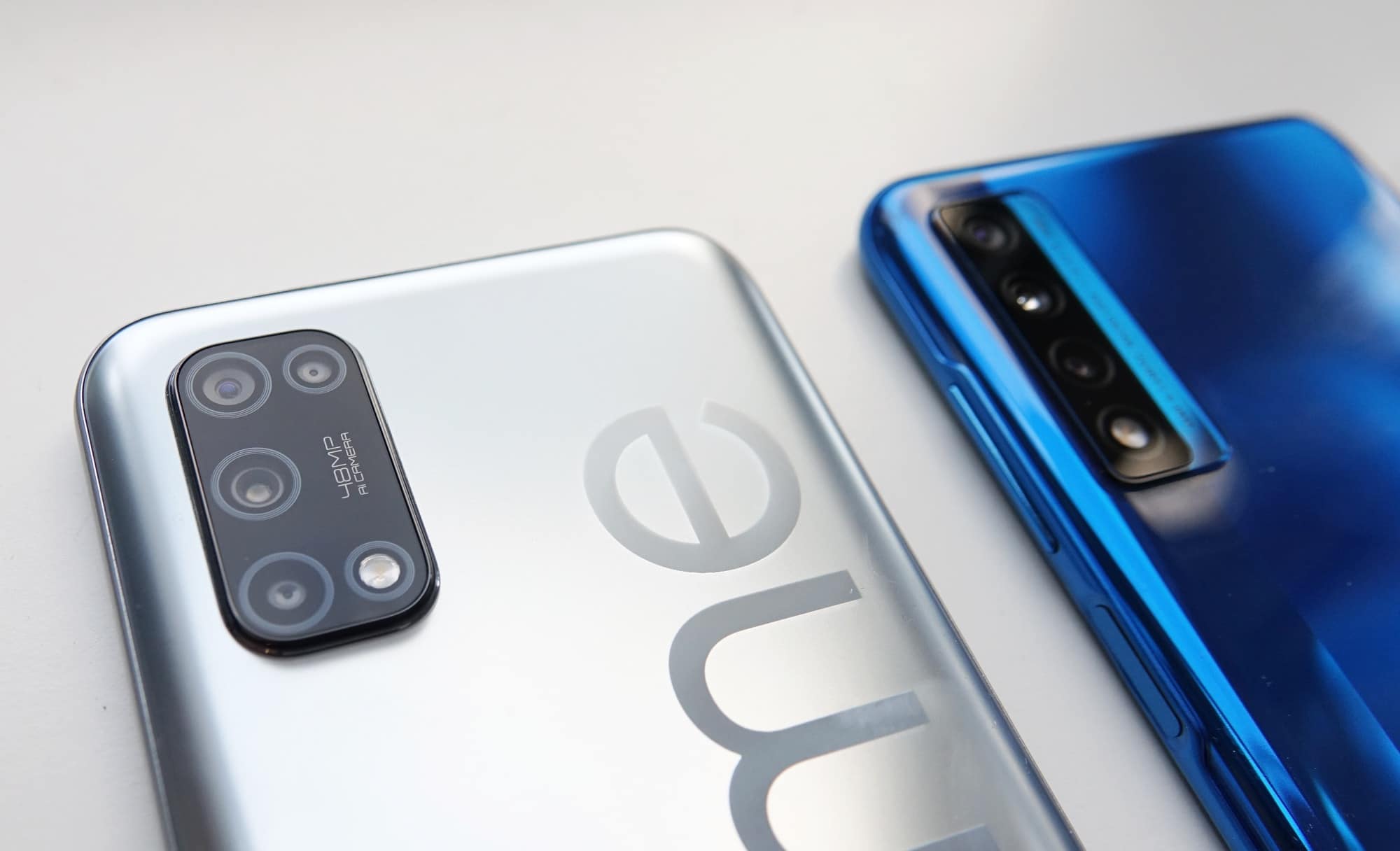 And they all arrive with roughly the same value, achieving price points of $499 in most cases, though the Oppo A54 5G is the new low price point for 5G in 2021, managing a recommended retail price of $399 locally. Yikes.

But the low price is paired with low performance, something you can see from the 4GB RAM, so our value argument isn’t going to come from price alone, but rather capability.

In terms of performance, we found the specs of the Moto G 5G Plus and the TCL 20 5G delivered the most bang for your buck in this category, giving it to these two in terms of value. They’re both $499 and both offer similar feature sets, Moto giving a little more in the camera department, but we’d say the value is about on par with each other here. 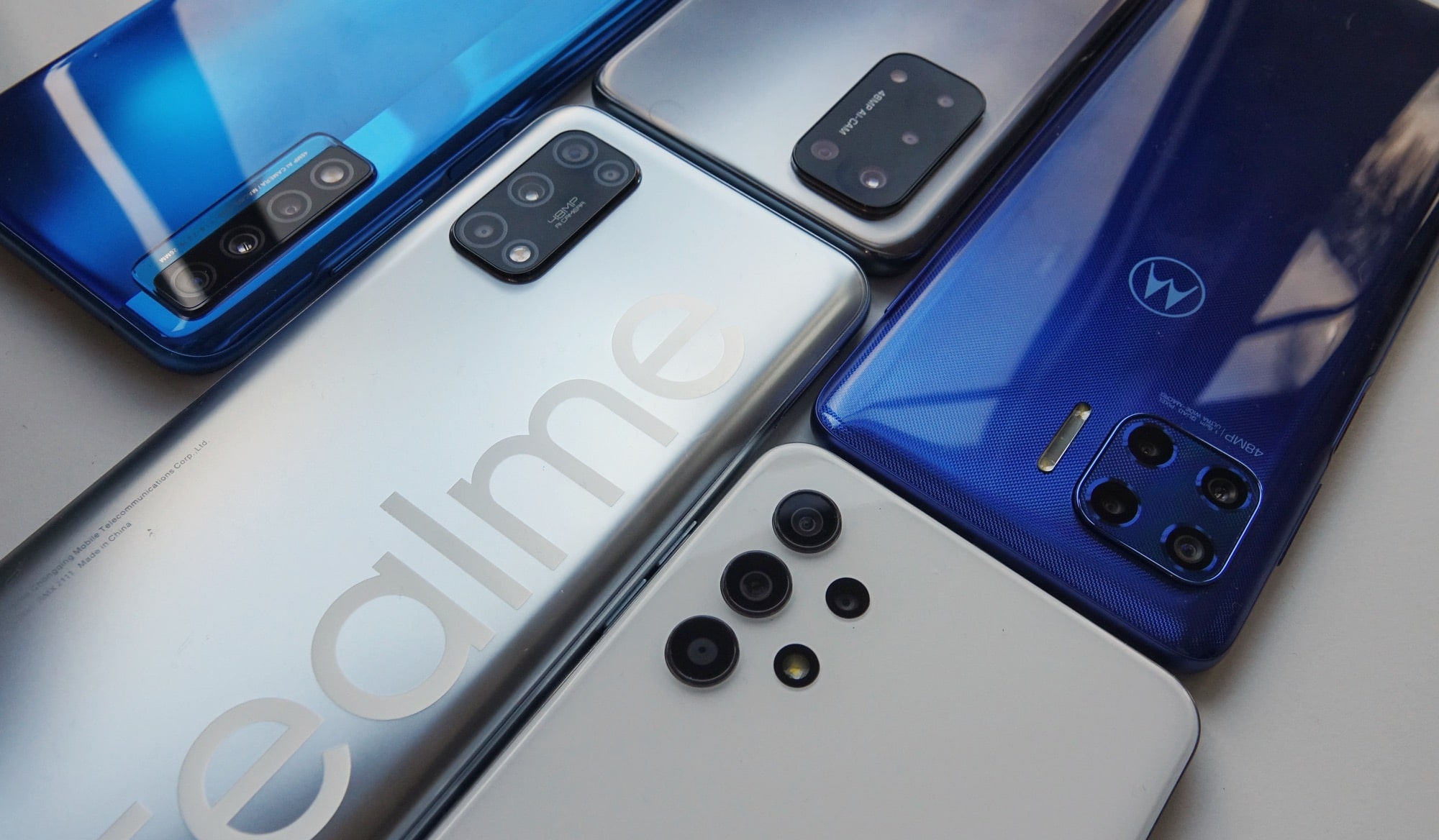 By the middle of 2021, it’s pretty clear there’s a new 5G battleground, and it’s the mid-range. That’s exciting, because while flagship 5G is undoubtedly a big area, the inclusion of high-speed 5G shouldn’t necessarily be one of those things that commands a higher price simply for existing.

One of 5G’s problems is that it doesn’t really solve a problem yet, beyond more speed for the future. Eventually, that may include better video calls, telehealth, and a barrage of possibilities, but right now, it just means faster ways to download stuff from the web.

Faster download speeds aren’t necessarily a reason to spend a lot of money on a new phone, so seeing 5G on more devices at better price points is a win for consumers, because much like how the mid-range changed a few years ago to give people a better deal on big phones in general, it’s now accommodating 5G in the spec, as well. That’s great.

The move to change that began last year when we saw 5G drop under the thousand dollar mark, and this year, it’s below the $500 mark. Barely mostly, but still there.

However every sub-$500 5G phone we’ve reviewed this year as largely been the same, so if you’re trying to work out the best $500 5G phone, they are pretty close.

Category by category, Motorola’s G 5G Plus is largely the best of the bunch, followed by the TCL 20 5G, and then by the Realme and Oppo phones, while our experience with the Samsung Galaxy A32 was less than desireable. But if you want real bang for your buck, you might want to move just a little beyond the $500 mark, because it gets a whole lot more interesting closer to $800. Granted, $300 is a lot of cheddar to spend extra, but you’ll find better cameras, which can make up for the differences quite quickly.

Alternatively, you might want to wait. We’re seeing more phones drop in price and more 5G entrants than ever in 2021, and that can only mean more competition and picks coming in the pipeline, too. In the case of 5G under $500, you might just want to watch this space, because by the end of the year and into early next, it could get a whole lot more competitive overall.