Looking to join the 5G world but don’t want to spend the proverbial arm or leg? The Oppo A54 5G is $399, and might just be solid value, if not for one thing.

The price of 5G is falling, and that means you don’t need to spend a whole lot to get stuck into the high-speed world of 5G connectivity.

Now that every major Australian telco has a 5G offering, as well as some of the smaller ones, it’s coming to more people and more price points, and that includes prices around the $500 mark.

But Oppo is about to go one better, offering a 5G phone that undercuts the world of mid-range 5G by a good hundred bucks. At $399, the Oppo A54 5G is Australia’s least expensive 5G phone. Is it worth saving a few bucks, or should you opt for a little more? 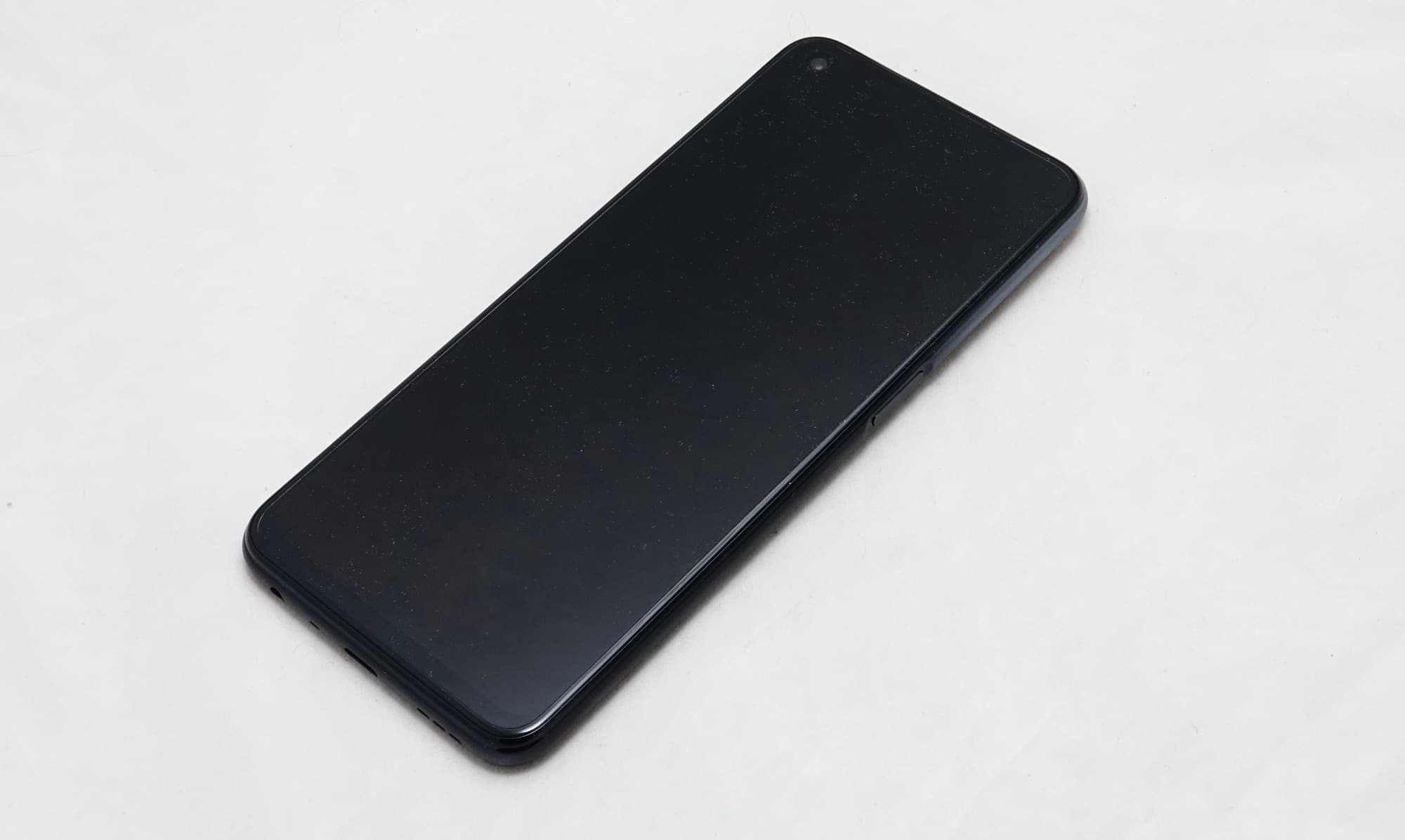 Oppo’s latest phone might aim to deliver more for less, but it won’t exactly break the mould in terms of design prowess. In fact, if you’ve seen an Oppo phone in the past few years, there’s a good chance this will look exactly the same, because it kind of looks exactly the same.

In the Oppo A54 5G, you can expect mostly screen on the front with a hole punch camera on the top left, while the back is set in plastic with a camera block in the top left.

It’s an all plastic phone that looks a little premium yet isn’t, though given the price, that’s hardly a surprise.

Under the plastic case, Oppo has provided an interesting assortment of specs, with some thing you mightn’t expect.

On the chip and memory side, there’s Qualcomm’s Snapdragon 480 5G processor, a budget eight-core 5G processor paired with 4GB RAM and 64GB storage, the latter of which can be upgraded uses a microSD slot found in the phone alongside the nanoSIM tray.

Google’s Android 11 arrives on the Oppo 54 5G out of the box, skinned with Oppo’s ColorOS 11, and as for connections, there’s quite a few there, too, with 802.11a/b/g/n/ac WiFi, Bluetooth 5, GPS, 4G and 5G, plus USB Type C for data and charging, plus the 3.5mm headset jack that’s now disappearing on devices. And interestingly, Near-Field Communication (NFC) is included, meaning you can use the A54 for mobile payment with Google Pay. 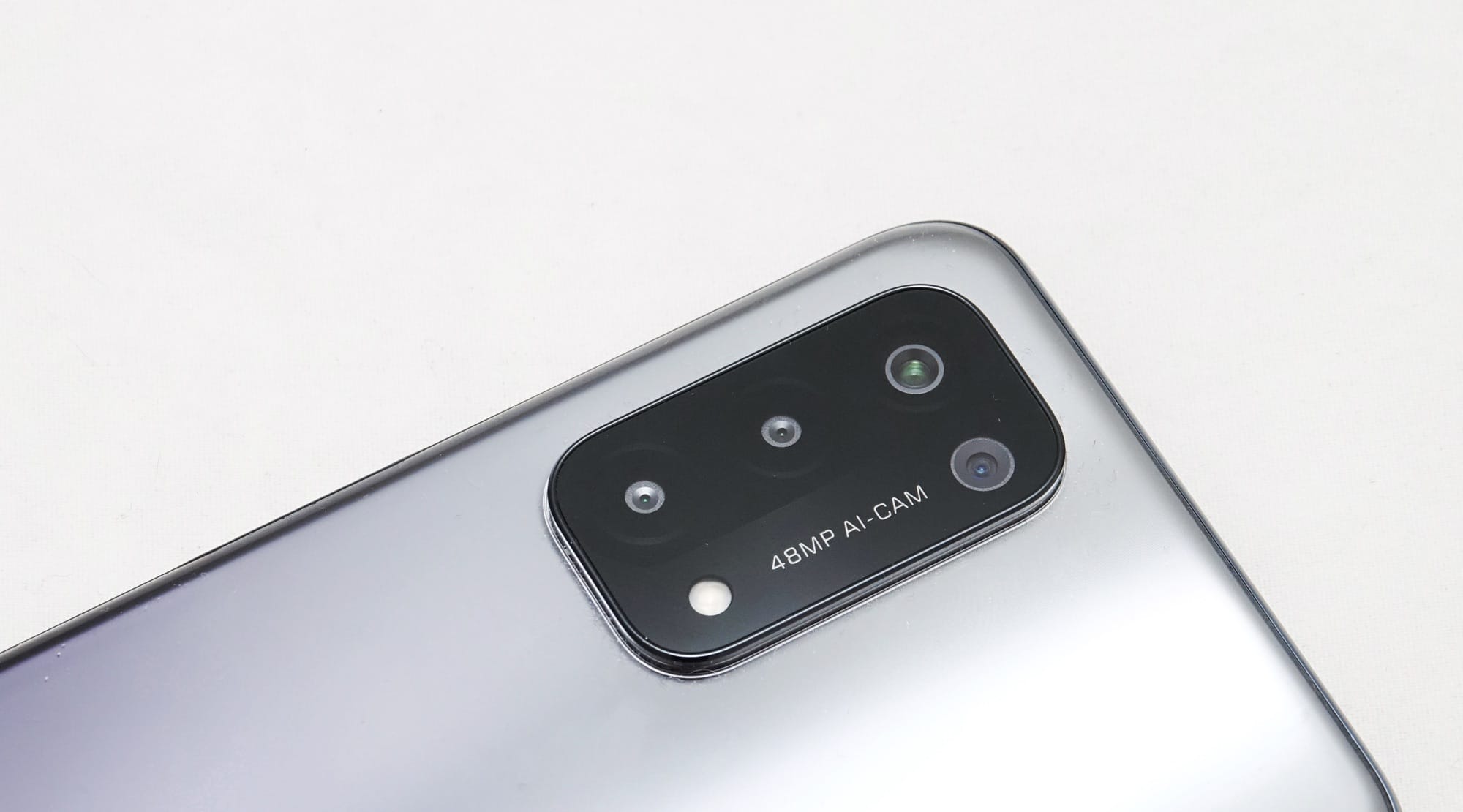 Topping all of this is a 6.4 inch Full HD+ touchscreen display offering a bit of a surprise, with a Full HD+ panel running at 2400×1080. That’s a surprise simply because it’s so high, delivering 405 pixels per inch (405ppi), and higher than the usual HD+ panel seen in phones at this price point. Oppo has even included support for 90Hz, making the screen smoother than your typical phone at this price point.

The power button can be found on the right side with a fingerprint sensor underneath, while the volume buttons are on the left side. And under all of this is a 5000mAh battery. 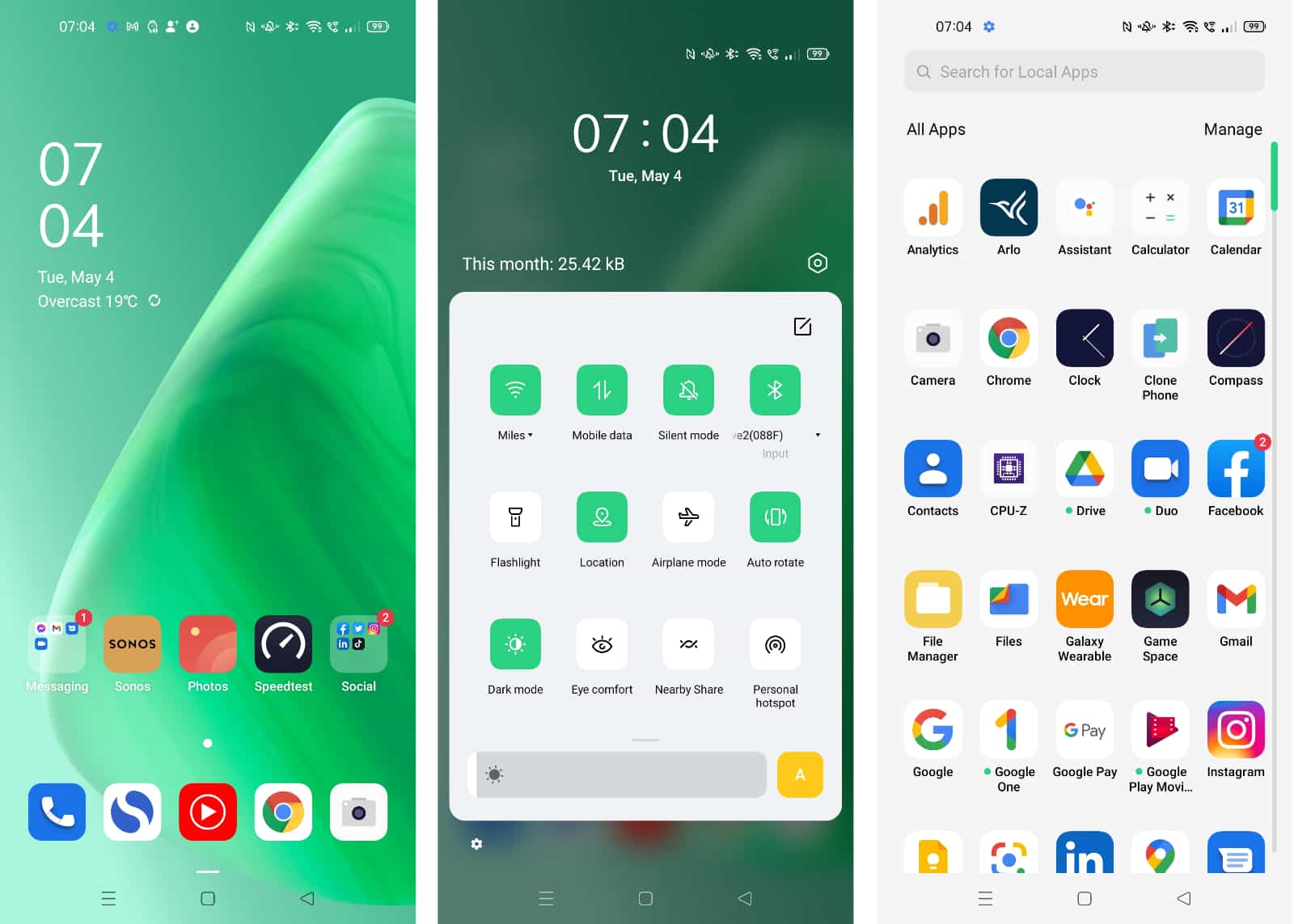 Start playing with the A54 5G and you’ll find Android is pretty easy to use, making it ideal for either folks familiar with Android or iPhone. ColorOS has often leaned to the iPhone friendly folks, but much in line with what we’ve seen on both last year’s Find X2 Pro and this year’s Find X3 Pro, it’s easy really for anyone to get behind: home screens, widgets, app drawers, it’s all here.

Keeping the price down has seen Oppo remove something from the package, with our favourite relaxation app O Relax missing in action on this phone, though that’s unlikely to bother anyone craving the $399 price tag this phone has.

Of particular note is the fingerprint sensor, which located on the side in the power button helps to make the phone super easy to unlock and use. Set the A54 up with both your digits and your face, and you’ll find either unlocks the phone quickly, making it easy to get using your phone whenever you want.

Get to using the phone, and you may see some of the slowdowns from that 4GB RAM, which is paltry, but was at one point quite generous. These days, not so much, especially for Android, as the Oppo A54 demonstrates.

Rather than chug along at a nice pace and run apps smoothly, our testing of the A54 revealed numerous slowdowns as we jumped from app to app, or even tried to use some of the standard functionality, though it was intermittent at best.

At times, the Oppo A54 5G was smooth enough for typing, but then apps would take an extra second or two (max) to do your bidding. Refreshing Twitter or Facebook would take a second extra of your life, while firing off a screenshot could take two. The performance issues started to give us an idea of where Oppo had compromised in this cut cost 5G phone. 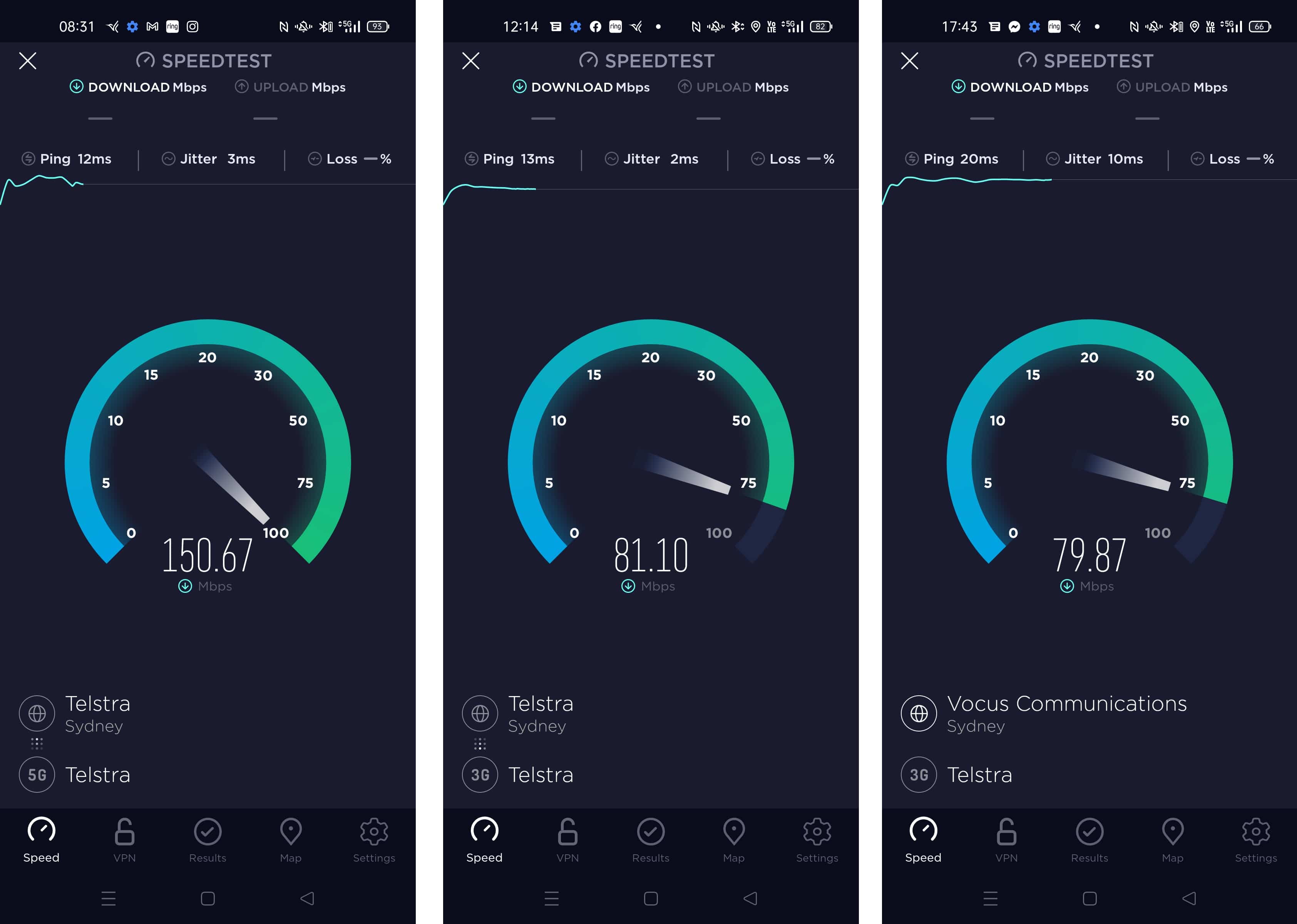 Even the 5G didn’t quite feel as strong as it has been on other phones, with the blistering speeds hard to find. Granted, we’re at the mercy of the telcos with these results, and your experience will likely vary from our own, but we found it near impossible to hit faster than 200Mbps in out tests on Telstra’s 5G network across Sydney.

Sure, the phone was connected to 5G, but it hardly felt like it.

Hopefully the camera fares better, though Oppo’s four camera setup may impress in numbers before you experience what it has to offer.

As far as numbers go, the A54 5G offers a 48 megapixel camera, plus three other cameras less likely to matter. The 48 megapixel camera is the better of the bunch, and works acceptably in low light, but not fantastic. You’ll get the shots if you hold still, but it’ll be blurry otherwise. Fortunately, daylight is hardly an issue at all.

The other three cameras are less important, though, with the 8 megapixel camera giving you an ultra-wide but somewhat soft camera, while the remaining two — a 2 megapixel for macro and another 2 megapixel monochrome — hardly being interesting enough to warrant a look.

For the most part the camera is acceptable, yet not amazing. But for the $399 price, that probably won’t be terribly surprising.

With an acceptable albeit not terribly amazing camera, the battery life more or less equals what you get from taking pictures on this phone.

Your usage will vary, of course, but in our Oppo A54 review period, we found the battery life offered a good day and a half of battery life, meaning you didn’t need to charging it nightly unless you exhausted that screen excessively.

That’s not bad at all, and should satisfy most people, delivering close to two days from the 5000mAh battery in the A54 5G. 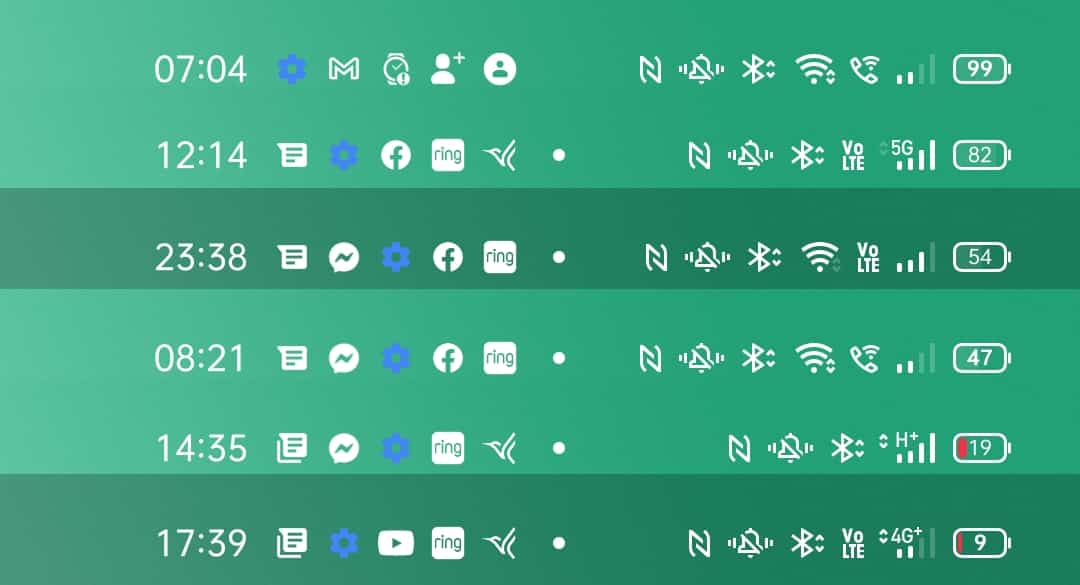 The price is also right, achieving some pretty staggering value.

While the spec list isn’t the highest in the world, 64GB and 5G under a big screen and with a big battery isn’t bad at $399.

We thought the $499 5G phones would be the limit to where 5G would hit this year, so we’re tremendously surprised Oppo has been able to hit this benchmark, nailing value incredibly well. 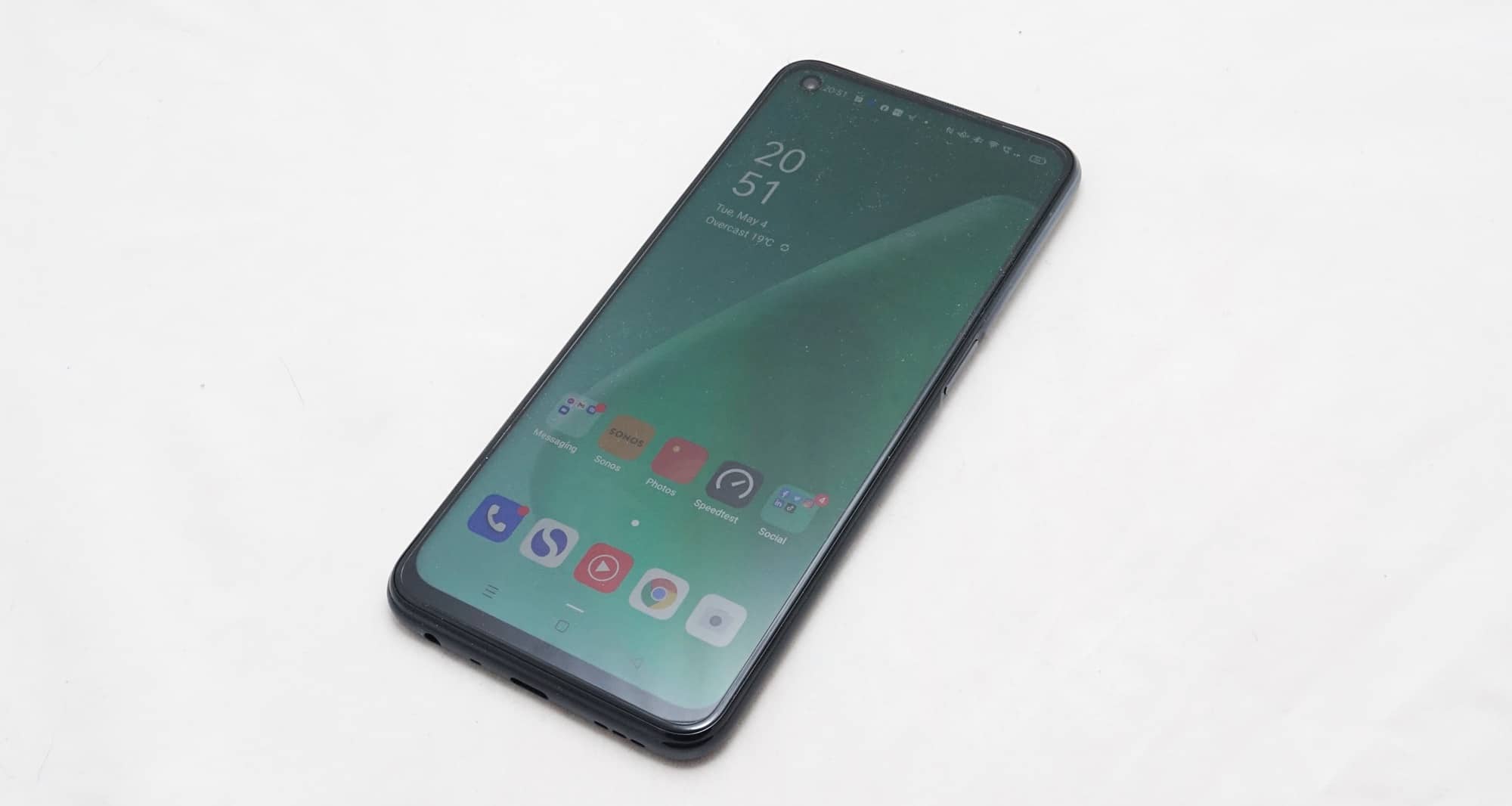 But while Oppo nails value in droves, the performance can help you understand why.

Armed with only 4GB RAM, the Oppo A54 5G struggles to hit a stride, with a good half second to a second delay in some operations. Snap a screenshot and you’ll see it, and you might even see it when you jump from app to app. Even if it doesn’t become a problem while you type, it appears the 4GB RAM is just too small for Android and ColorOS to get its act together.

Comparing the two, the A54 offers 4GB RAM, 64GB storage, and 10 watt charging, while the A74 costs $50 more for 6GB RAM, 128GB storage, and 18W charging. You might look at those differences as minor, but the 6GB RAM is enough to tell us the A74 5G will outperform its A54 5G sibling, because memory is the issue on this phone.

It’s not a dire issue, mind you, and the A54 5G still provides 5G at a 4G cost, something that makes it unique. We just think if 6GB RAM had been the minimum, the handset would have been a better proposition as opposed to merely a value proposition. 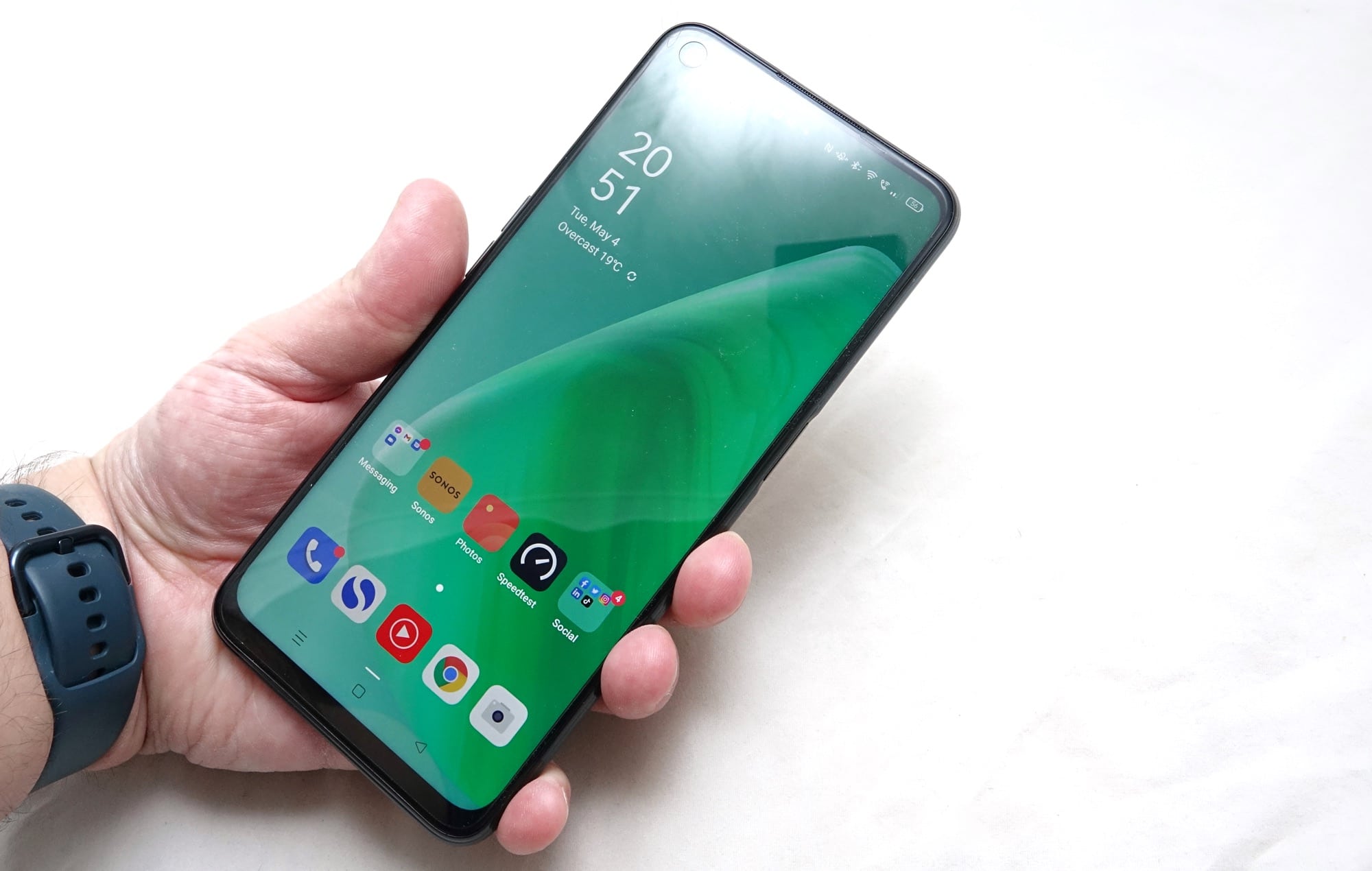 However after spending time with our Oppo A54 review unit, it’s pretty clear that Oppo wins the A54 on value alone.

At $399 in Australia, no one can beat what Oppo has delivered in terms of getting a bargain here, and the gauntlet has been laid: 5G doesn’t need to cost an arm or a leg. Yet the performance also undermines this standout price, with slowdowns that are too obvious to ignore.

We’re not sure if that would have been helped by a better speed of memory or just more of it, but it’s the sort of thing you can bet we’re surprised Oppo didn’t just optimise itself. It would have been easier and better all around.

That makes the Oppo A54 cut-cost 5G value, but also cut-cost 5G with a catch. Simply put, performance is the catch, and you may want to be a little patient with the A54 when it comes time to use it.

Because of this, we’d probably suggest the A74 5G over it, especially given the $50 difference and the increase in memory, which this phone so clearly needs. 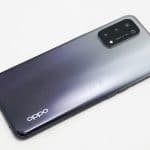 Oppo A54 5G
Design
Features
Performance
Ease of use
Cameras
Battery
Value
The good
5G below $400 is a pretty stellar benchmark
Camera is surprisingly decent for the price
Screen is surprisingly good for the price, too
Not a bad battery
The least expensive 5G phone yet
The not-so-good
Slow down are obvious and noticeable
5G doesn't quite hit its stride
3.5