Can a gadget in a cup clean the air of odours and allergens and other microscopic nasties? Maybe, as Panasonic’s Portable Nanoe X purifier shows.

It’s the sort of thing I largely expected to be fiction, or at the very least, a heap of marketing slogans assembled into a USB powered gadget that would do very little. When Panasonic first floated the idea that it could remove smells from the air, my immediate thought wasn’t to trust it.

‘I’ve heard this sort of thing before,’ I thought to myself. ‘This won’t work. This is a gimmick that will light up, whir a fan, and keep things largely the same. This can’t work.’

How wrong was I. 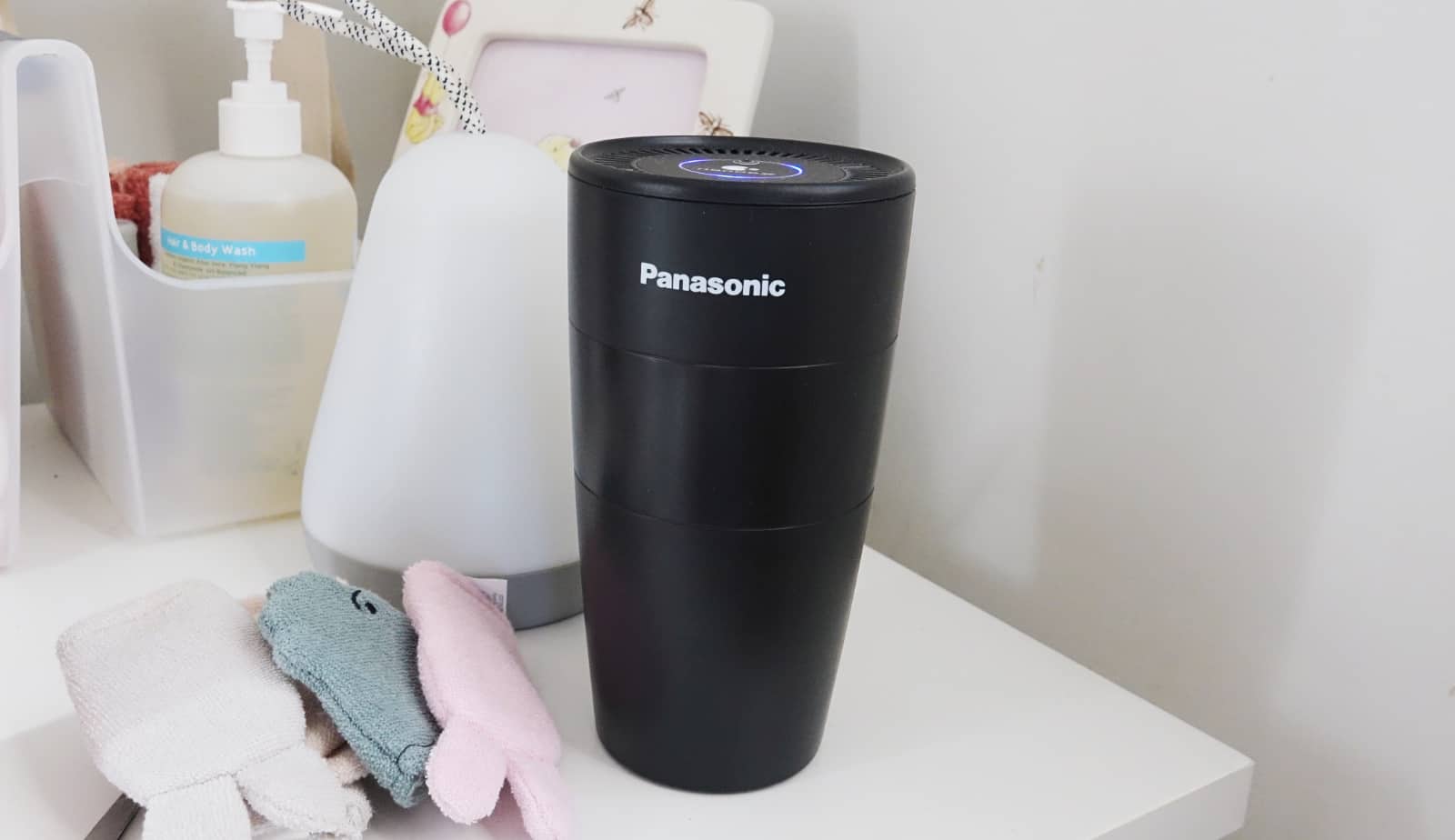 First, let’s talk what it is, because Panasonic’s Portable Nanoe X Air Purifier isn’t your usual random gadget reviewed around here. We’ve reviewed air purifiers before, but they’re normally big and integrated into other gadgets, such as Dyson’s Pure Hot+Cool Link, which is a heating fan with a purifier built into the body.

The Panasonic Portable Nanoe X is different. For starters, it’s much smaller, taking some of the technology Panasonic has used in its air conditioners and shrinking into the size of a large reusable coffee cup.

It’s not actually a coffee cup, but if you have a keep-cup, the Portable Nanoe X is roughly the same size as a large keep cup, so it’s not going to affect your luggage too much if you carry it around. 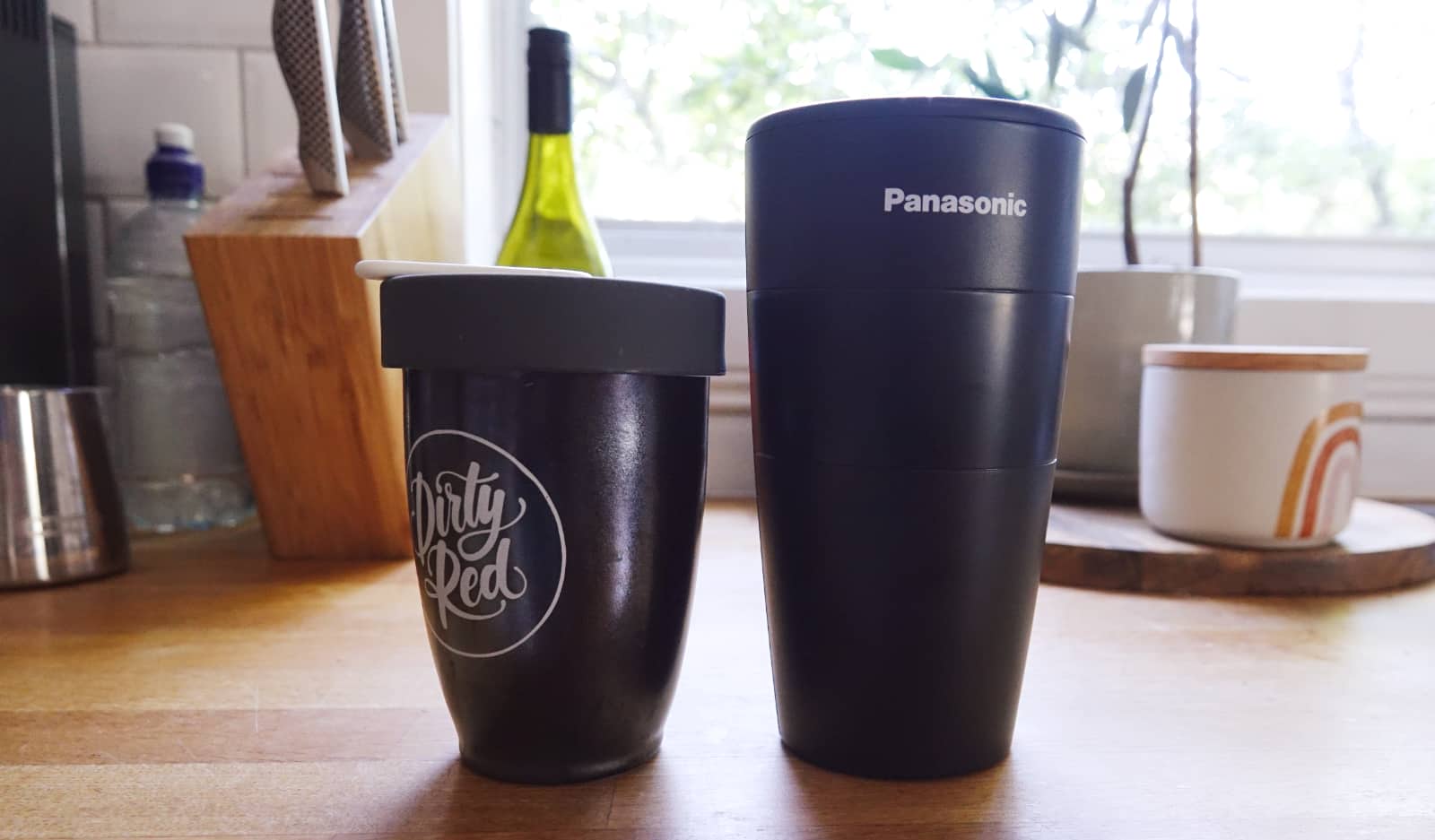 Inside, there’s a spot of technology that uses a lot of jargon to inhibit the water particles found inside odour, pollen, and bacteria, effectively doing so with tiny electrostatic particles made up of an ion and Hydroxyl radical.

There’s no air purifier like in the larger version of Panasonic’s technology, though, as this version is solely made for cleaning and quelling.

What does the Portable Nanoe X Generator do? 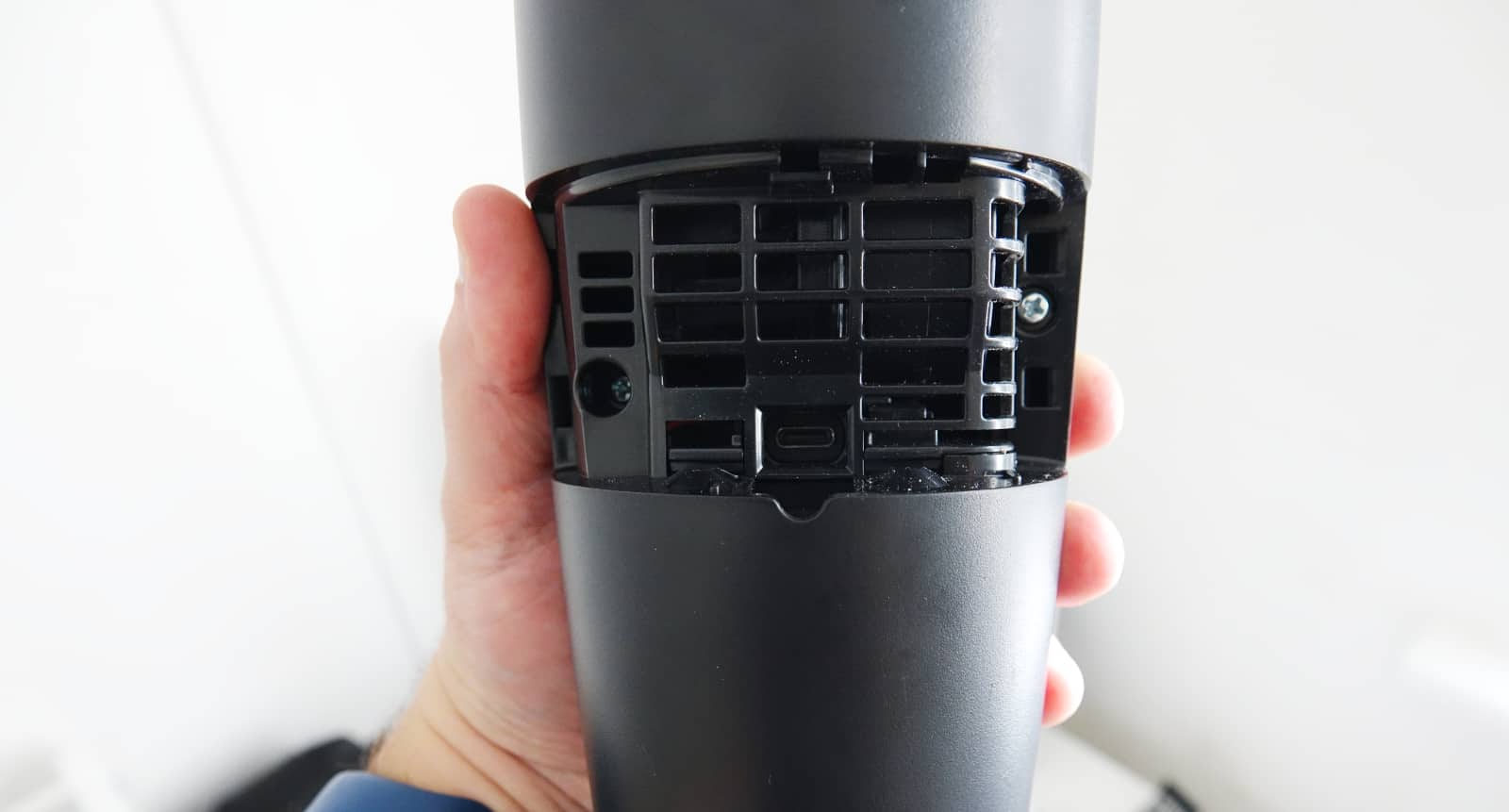 Using that technology and its mess of scientific jargon, you’ll likely use the Portable Nanoe X in-a-coffee-cup to clean the air of smells you don’t approve of, and possibly even bacteria and viruses you don’t even know are there.

Panasonic claims that the technology can inhibit viruses, one of which is the novel coronavirus, though that’s a test we’re not game to try ourselves, and we’re not sure we know many who are. As it is, those claims are from Panasonic internationally, and not in Australia, suggesting they may not have been vetted by the Therapeutic Goods Administration locally.

However, we’re definitely game to see what it does on odours, because that is a problem we can all relate to.

Sitting in the back room sharing an office with the dogs or changing a newborn’s nappies all seem like valid tests of an air cleaner, because they are both situations that will affect the air in a negative way.

However, what surprised this reviewer most of all is that the Panasonic Portable Nanoe X Air Purifier actually did what was advertised on the box: it cleaned the air.

While a faint whiff of dog can be smelled by all who enter his office at times, run the Portable Nanoe X generator for a couple of hours, and that faint whiff disappears, replaced with the smell of nothing. For the purposes of this review, “nothing” is a light smell of fans and fresh water somehow merged, but it’s essentially the replacement of a bad smell with a clean smell, and the same is true with the world of child’s nappies.

Parents can tell you how much their conversation turns to talks on faeces when they have kids, and the faces that follow those odours are a topic in and of itself. Running the Portable Nanoe X in that bedroom, however, and the smell hardly lingers. You’ll never get rid of the smell during the change — technology can only go so far — but at least it won’t stay, which is a win. 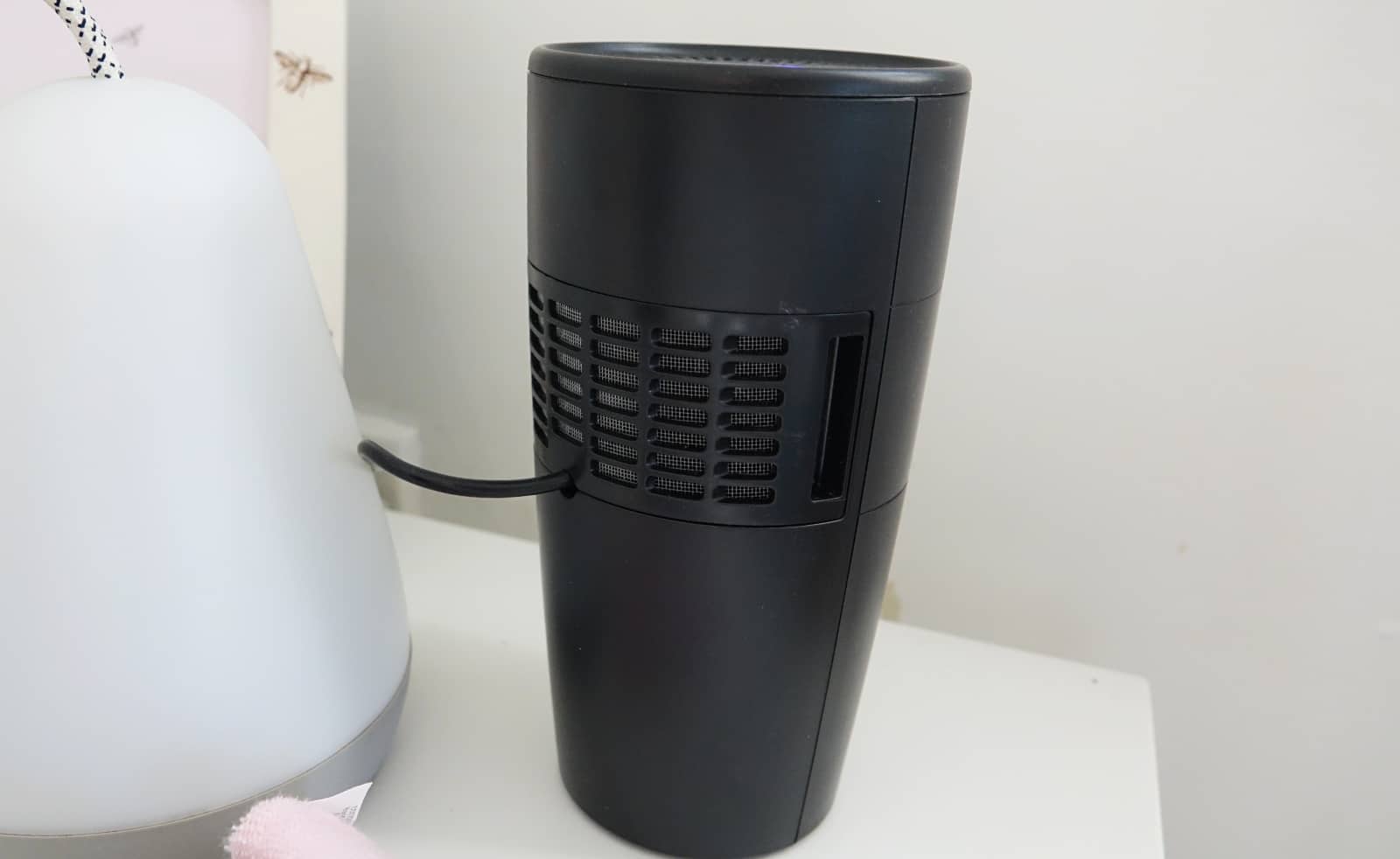 But we wish it had a battery to run by itself, and an app like most things these days, or just some measurement of what’s out there.

In the Dyson purifiers, you get an idea of what’s in the air because it shows you on a little LED screen what’s spiking, even as the filter purifies the air. That’s great, because it tells you what you need to look for, and possibly whether you need to invest in a larger filter or purifier, or whether to tell someone at work to look into things.

This sort of thing would be super handy here. Specifically, if Panasonic’s air cleaner was able to inform you of what’s in the air, you might make a bigger leap to one of its other Nanoe X-based gadgets, or even just investigate what is going on.

We’re also not sure there’s a filter inside, so this portable air cleaner may not actually be filtering the air. That’s both good and bad: you may not need the air filtered per se, but if we ever head back into bushfire season where the particulate risk goes up, this little air cleaner mightn’t be the thing that helps you.

On the one hand, its use of hydroxyl radicals might help the situation, but you also may end up breathing particles in that they can’t hose down, making this more of a one trick pony for cleaning the air in your office and on the go. 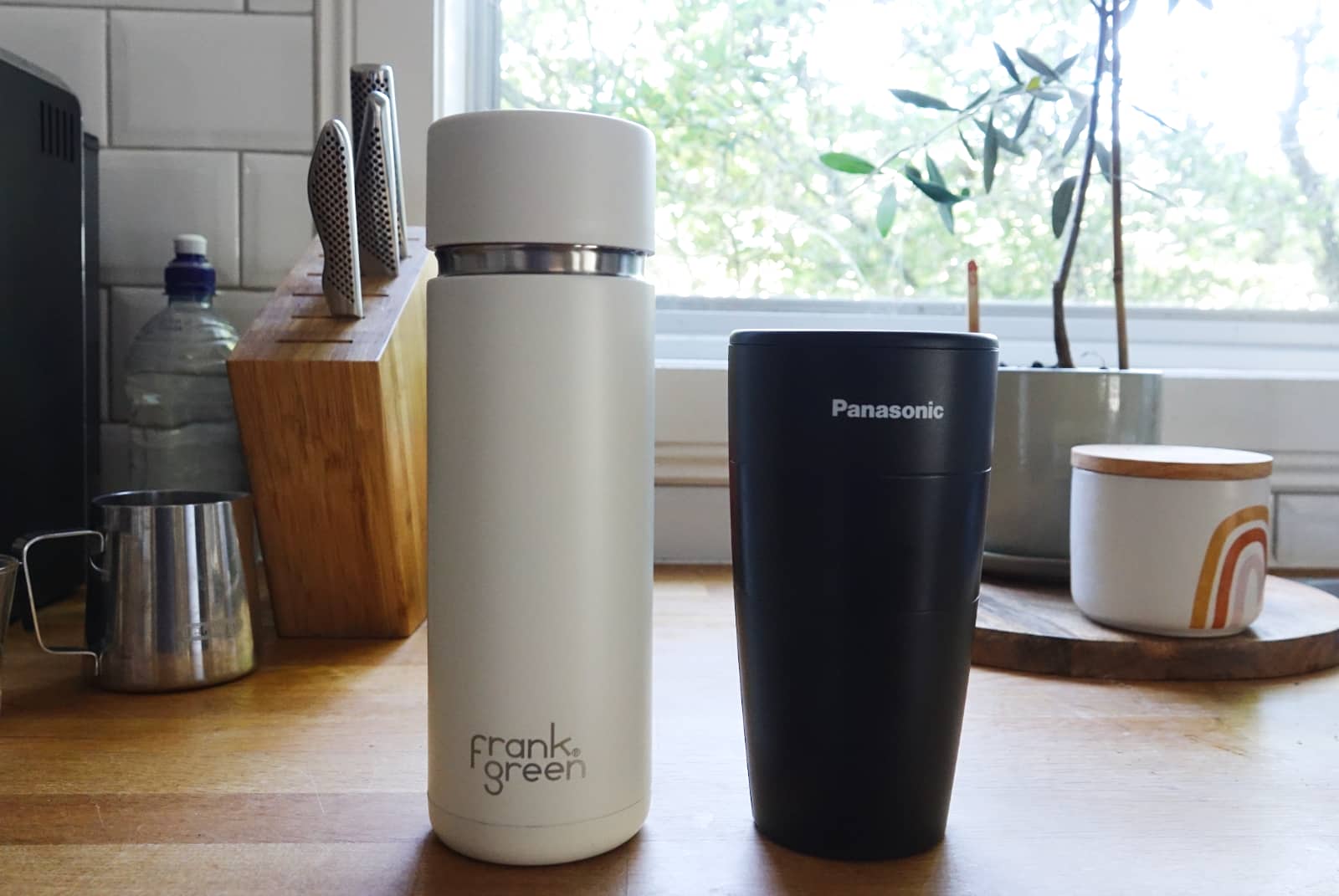 Available for $299 in Australia, Panasonic’s Portable Nanoe X Generator is a surprising win, though one that’s hard to nail the value for in general.

As it is, the whole concept feels like a very cool but expensive tech demo for the stuff found inside its air conditioners and floor-standing air purifiers, because you’re getting a sample made to take on the road with you, but not one that actively cleans more than a small space.

We’re still not sure we’d necessarily trust Panasonic’s expectation that the Nanoe X tech will inhibit coronavirus, and will keep masking up the few times we need to go outside. It’s not as if Omicron is backing off, what with BA2 out in the crowd and Deltacron the next thing, it seems, so the Nanoe X isn’t going to save you completely from what’s out there.

But if you have to return to the office and aren’t a fan of the smells, plus want to do everything you can to prevent your space from being affected, we suppose it could help.

Just don’t expect the Portable Nanoe X to be a total saving grace. It’s not bulletproof Covid armour, nor is it really meant to be. The fact that Panasonic has a claim on its tech inhibiting coronavirus doesn’t mean you won’t necessarily get it when it’s on. That $299 cost isn’t necessarily going to beat the stopping power of a one buck mask, though the two together might do something. 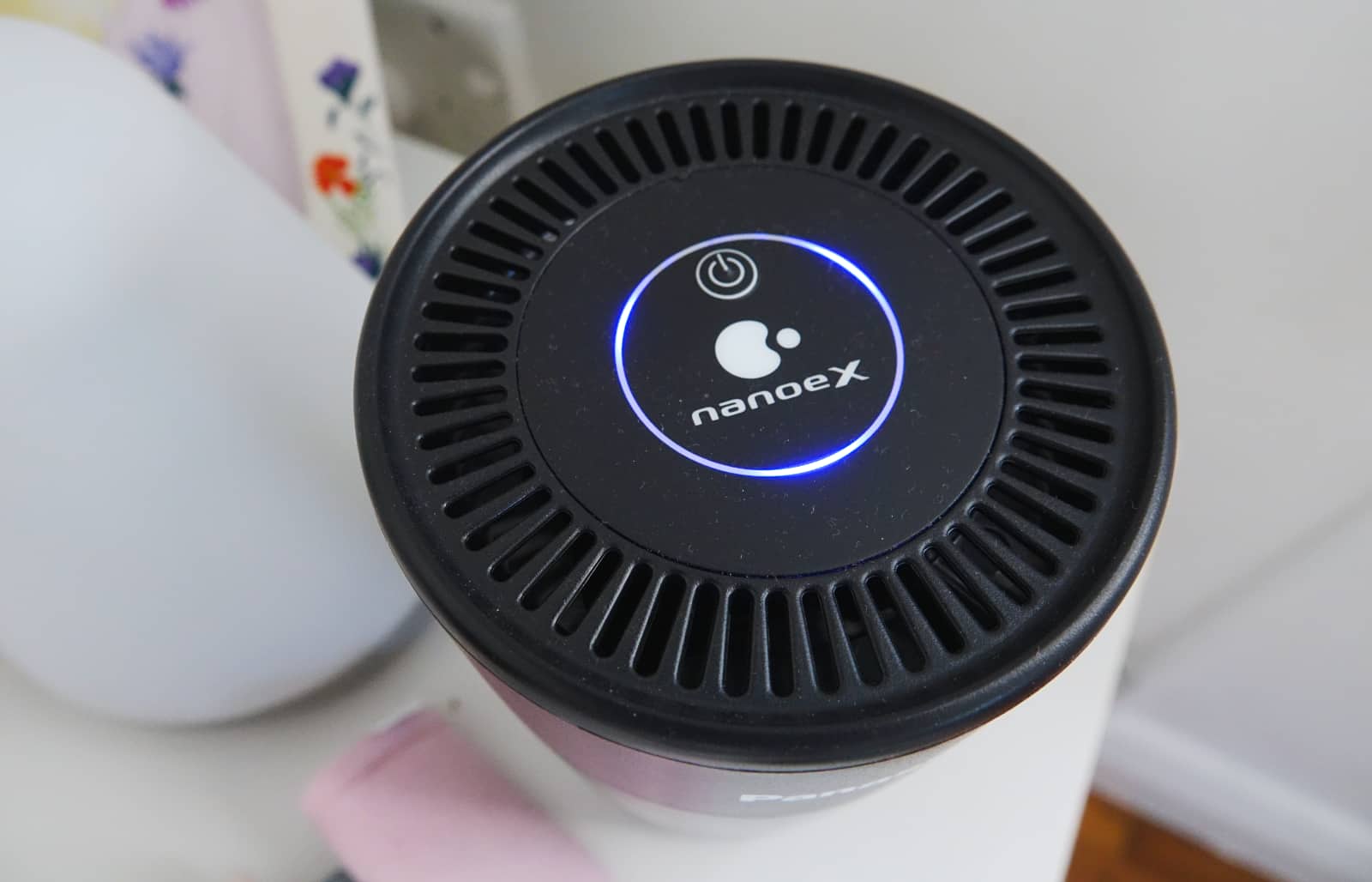 What we found was that Panasonic’s Portable Nanoe X air filter does actually work with odours and smells, and that totally surprised us. We genuinely expected a silly gimmick that at the most merely lightened the load on odours, not totally removed them. And we came out changed, as did the room we left the little machine in.

It’s worth noting that the Portable Nanoe X isn’t going to be a total replacement for an air filter or purifier, or even for a way to reduce the risk of airborne hazards. This can clear the air, but it mightn’t totally clean it. But for some, that also mightn’t matter.

If you’re looking to keep spaces odour free either at home or on the go, this is one gadget that does what it says. 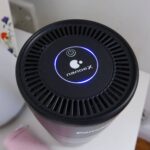 Panasonic Portable Nanoe X Purifier
The good
Actually removes smells and odours from a room (until they're made again)
Compact design
Easy to use: plug in and turn on
The not-so-good
Not sure if there's actually an air filter in the design like its bigger sibling
No battery built-in (it needs a USB cable to work)
Only cleans a small space
Could do with an app to tell you what's around or how much cleaning it has done
4 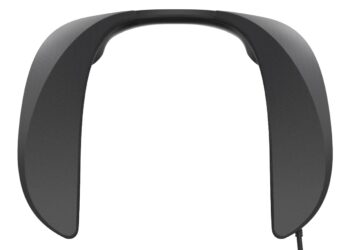