Jabra Elite 4 Active reviewed: great value and then some

Noise cancelling is everywhere, but it can still be expensive. The Jabra Elite 4 changes that, and even manages to include some of the extras expensive options may include.

With the world of truly wireless earphones opening up, the features you can find with earphones is changing. It’s no longer enough to cut the cords, because everyone can do that, even the cheap-as-chips options from manufacturers you’ve never heard of.

Last year, we started to see some of this begin to trickle in for lower price points, and there have been some very interesting shifts, but perhaps none more interesting than Jabra’s recent plays. With so many earphone options throughout the years, it’s been intriguing to see the company develop a strategy for the low-end, effectively building budget options for folks who want a little better than barebones basic buds.

Take the Elite 75t, which didn’t come with noise cancellation to begin with, but started to receive it via an upgrade when the Elite 85t started rolling out. In one hit, these earphones were upgraded to be even better, and made the 75t a compelling option for people who wanted a pair of noise cancelling earphones without spending quite as much.

So what do we have this year? Well, it’s a bit more of a middle ground improvement, as Jabra updates the Elite 3 to include noise cancellation and a little more water resistance, resulting in the Elite 4 Active, a pair that gets ANC down and yet the value up. 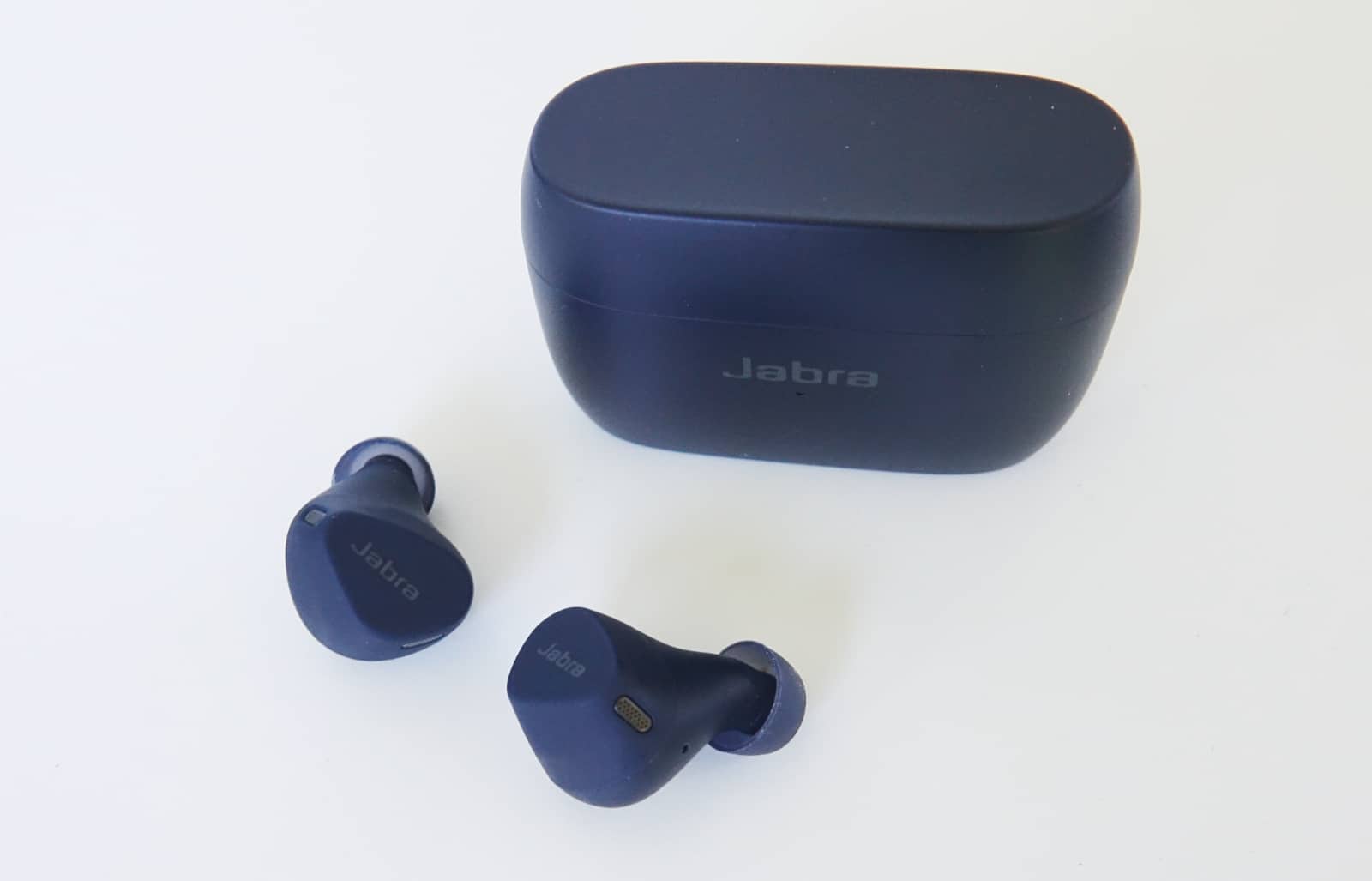 Designed and built in the style of what we started seeing from Jabra last year, you might pick up some aesthetic similarities in both the Elite 3 and Elite 7. As such, Jabra’s often slightly larger earphone look have been pared back, providing a fairly slim design that fits nicely in the ears, and doesn’t stand out of your ears too much as you walk around, either.

Inside, there’s a 6mm driver on each side with two microphones on either side, using these for either calls or active noise cancellation (ANC), or even switching some on for the HearThrough ambient transparency mode so you can hear through the earphones when you’re walking about.

Built as earphones, you’ll find a choice of three sizes of silicone tips in the box, par for the course for Jabra’s earphones and nothing totally surprising, and the Elite 4 Active come with voice assistant functionality, too, available via the button controls. There is one button per earphone, but no touchpad, so you’ll get around using the earphones by pressing the button in a number of ways, or even using the app. 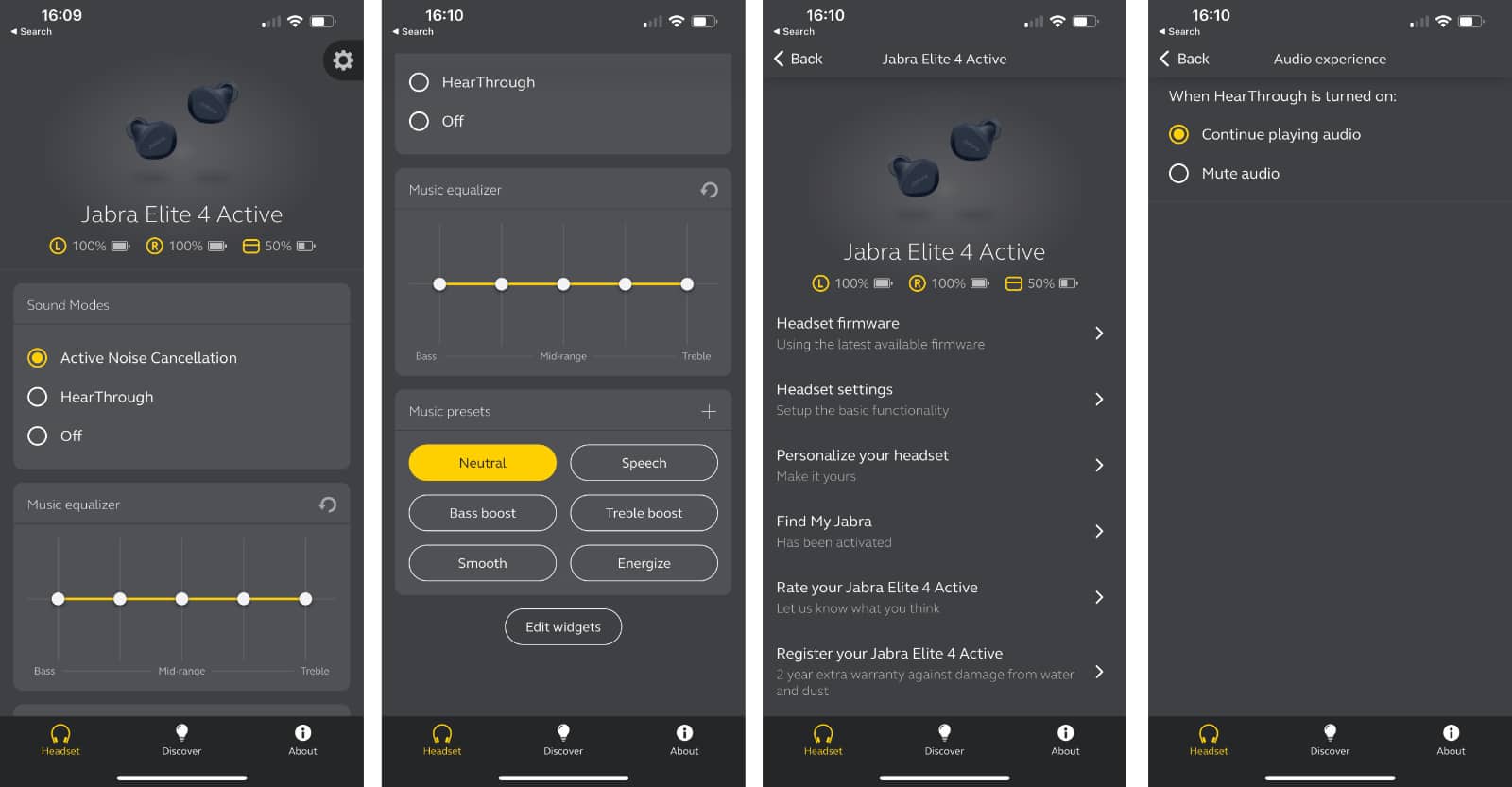 The app isn’t quite as varied as Jabra’s Sound+ app normally offers, with only three sets of controls: offering the cancellation or hear through mode, a customisable equaliser (EQ), or presets for that EQ.

You won’t find the white noise or rain controls here the Jabra app has offered in the past, but you will get the ability to tweak the controls and what the earphones cycle through, plus you can customise the strength and balance of the cancellation, options inexpensive noise cancelling headphones don’t typically cater for.

For the most part, you’ll get by pressing the buttons, though you can’t change what they do on the Elite 4 Active’s Sound+ app. You can find out how it works by checking the Quick Start Guide in the app, with the right earbud pausing and playing music with one press, while holding it down for a second increases the volume, and double and triple taps go forward and backwards a track, respectively. Meanwhile, the left earbud has one button press cycle through cancellation or transparency modes, two taps triggering a voice assistant, and holding the button down for one second lower the volume.

The controls are all about normal for truly wireless earphones, particularly those made by Jabra, and as such fairly easy to remember, leaving you to either throw the earphones in the case to charge (with the case charging over USB Type C), or really just get acquainted with using the earphones themselves. 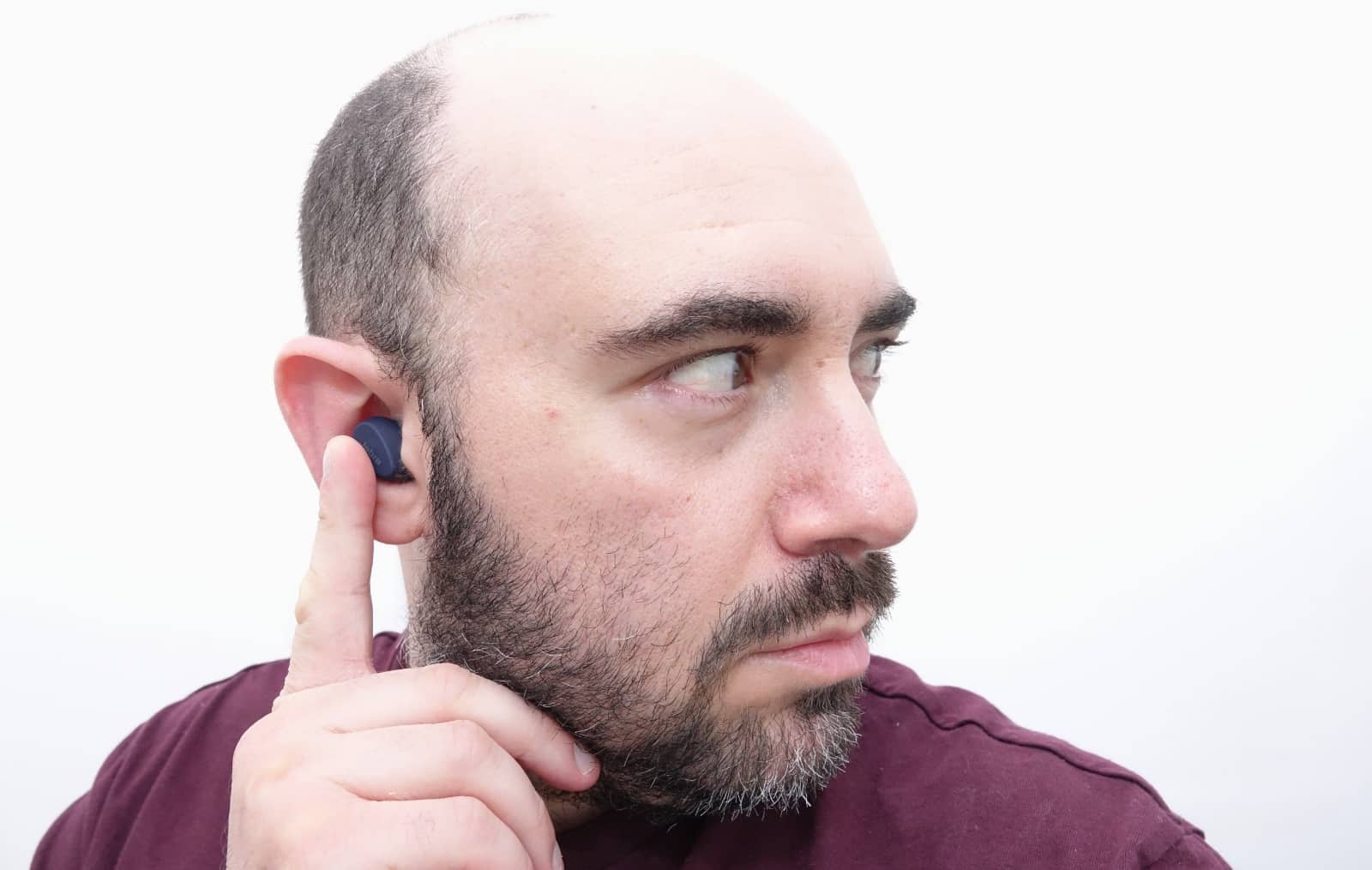 And to do that, we’ll get stuck in using the Pickr Sound Test, which you can test for yourself on Spotify, Apple Music, YouTube Music, and such. Of course, like all our sound tests, that starts with electronic through Tycho and Daft Punk, which deliver surprisingly impactful bass amidst strong balance, something Jabra is becoming quite known for.

The rendition is clear with good attention across the lows, mids, and highs, though the depth can feel a touch restrained, something we noticed on the pop of Carly Rae Jepsen and Ariana Grande, as well. Overall, it’s a good sounding pair of earphones, even as we made our way into heftier bass, such as with FKA Twigs.

With “One Week”, the harsh guttural bass we look for isn’t quite as earth shattering as we hope for, but the sound is solid overall and very listenable, delivering a clean and punchy recreation.

It’s much the same in rock and jazz, with tracks that aren’t as overly engineered and a sound that works to deliver pretty noticeable balance across almost everything, meaning there’s good sound to be had in the Elite 4 Active. 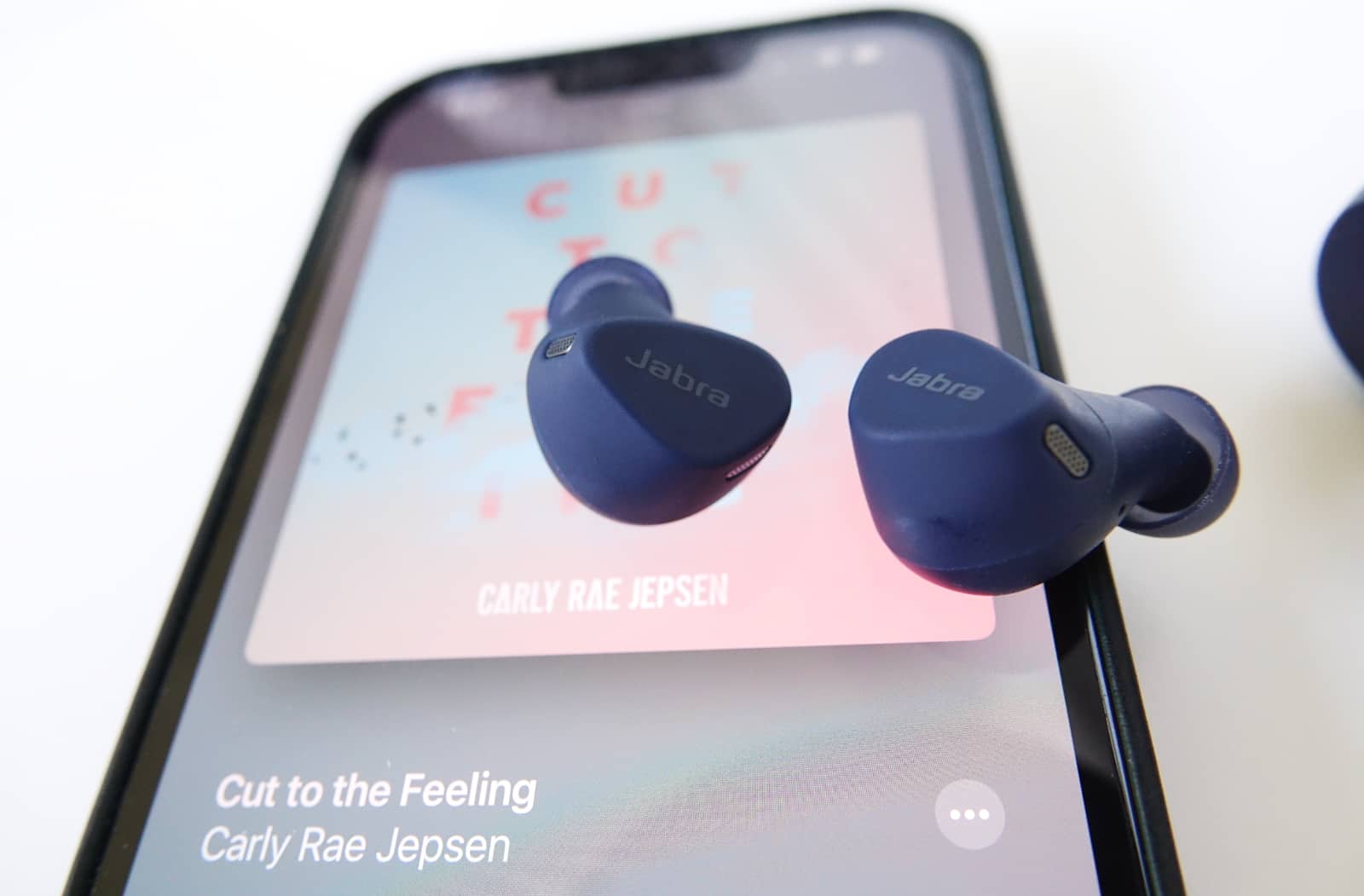 One of the more surprising areas was just how solid the transparency mode was, the Jabra “HearThrough” mode, which turns on the microphones and uses what’s normally there for noise cancellation to poke through the cancellation and hear the world. Switch that on and you’ll get a normal sounding transparency that matches what your ears should be hearing, distinct from the experience we had on the Elite 7 which pushed the volume just that little bit too much.

That might sound a little crazy, but in our tests and review period, the Elite 4 Active’s HearThrough feature seemed to better the Elite 7’s use of the same tech, even if the noise cancellation mightn’t have been quite as strong overall.

You will find it works, though ANC on the Elite 4 is a little on the basic side, doing the job but not going out there for adaptive or strong cancellation. Given the price point, we’re not overly shocked, but it’s just worth noting overall. 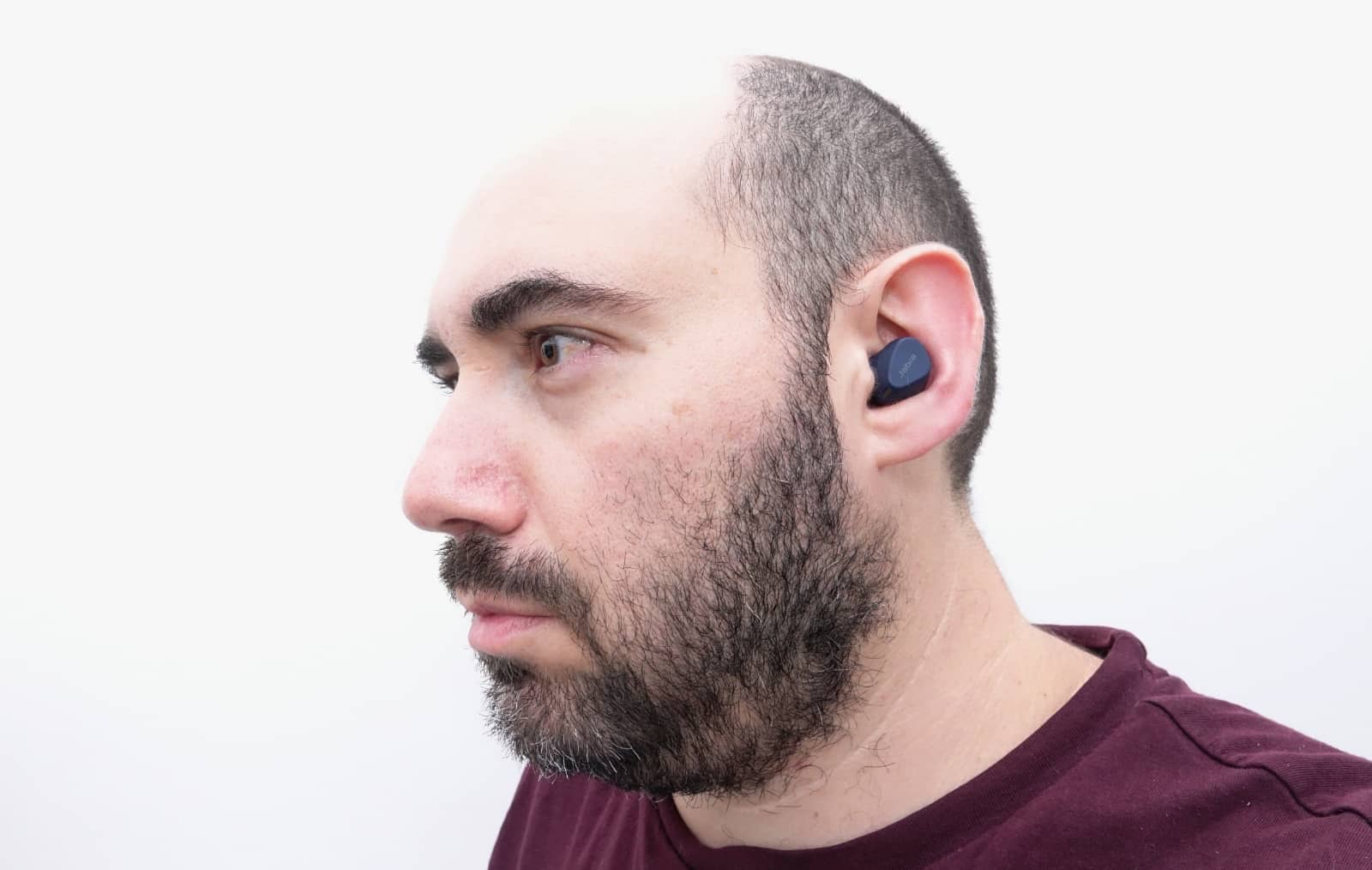 There’s a decent amount of battery life here, too, supporting up to 28 hours all up with the case, but more like 6 to 7 for the earphones and a remaining 3 charges in the case, which should be enough to keep you charged and happy through several days of use.

That’s as good as every other good pair of noise cancelling earphones — a little bit better than some, actually — providing plenty of battery life for a few days of regular use, or one really long day where you’re super reliant on your earphones (with breaks in between).

While the cancellation isn’t the most whiz-bang amazing ANC you can find, Jabra is essentially taking what worked in the Elite 3, adding a smidgen on noise cancellation, and improving the water resistance slightly, all to give you a just-as-balanced pair of ANC earphones for a sub-$200 price.

These days, noise cancelling earphones still command a bit of a premium, and while we expect this is the year we’ll begin to see the tech fall below the $100 mark, $179 for an app-connected pair of ANC earphones is a great deal overall. 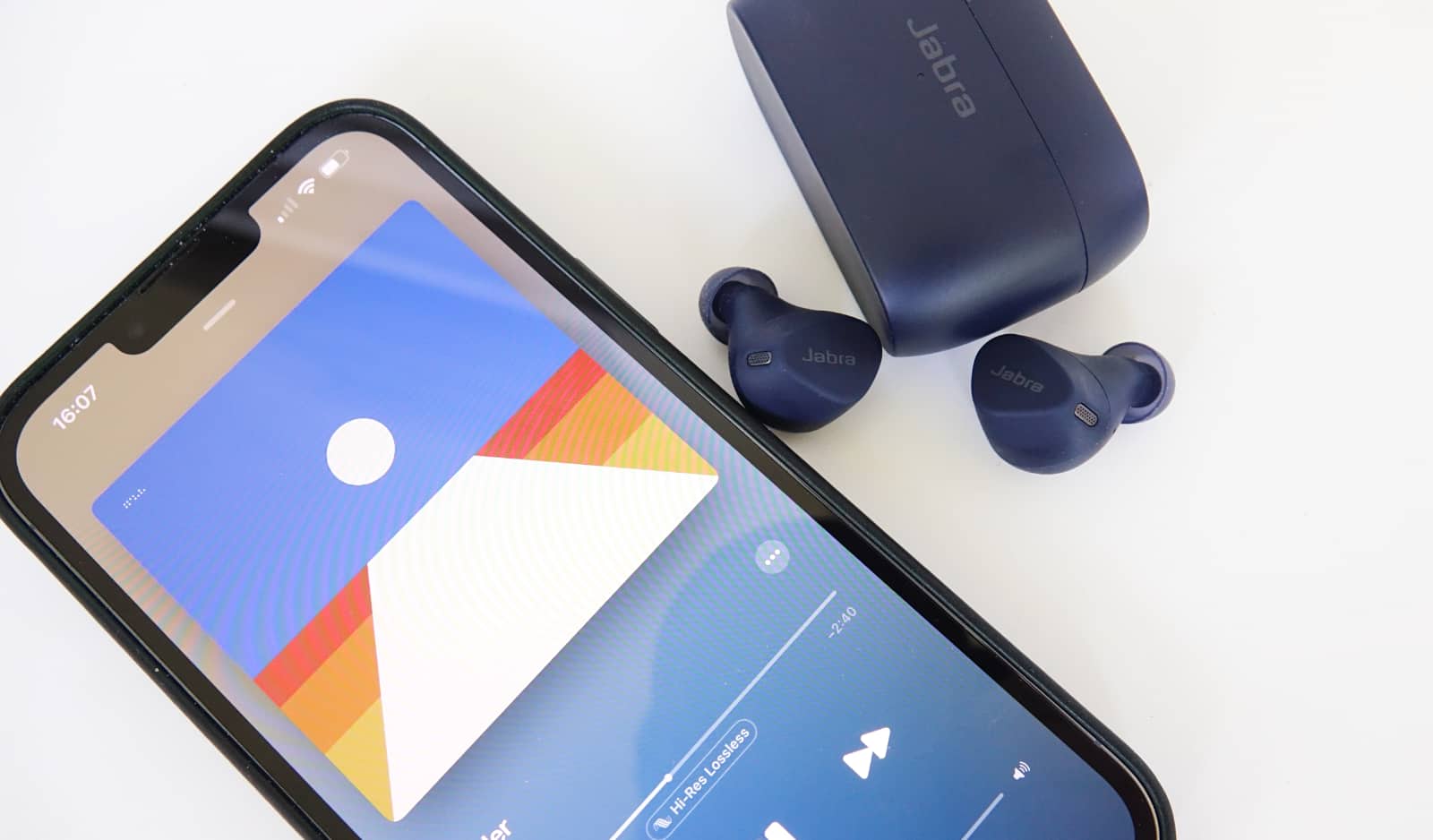 With decent sound, a capable battery, and pretty solid value, you might be wondering just what the Jabra Elite 4 Active needs to better. After all, for its price, there is a lot going on here.

They’re also quite similar to the Elite 3, but basically bundle in a modicum of noise cancellation into that package, which in turn appears to be helping the HearThrough mode, as well.

The noise cancellation could have a little more going for it, such as the ability to tweak it, and we’d dig a wirelessly charged case, but frankly, those are features are typically reserved for the premium so hardly an issue here, and really not worth worrying about.

Really, if we had to pick, they’d be our points, but frankly for the price, there’s little to complain about in the Elite 4 Active. They’re just full-featured with great value. 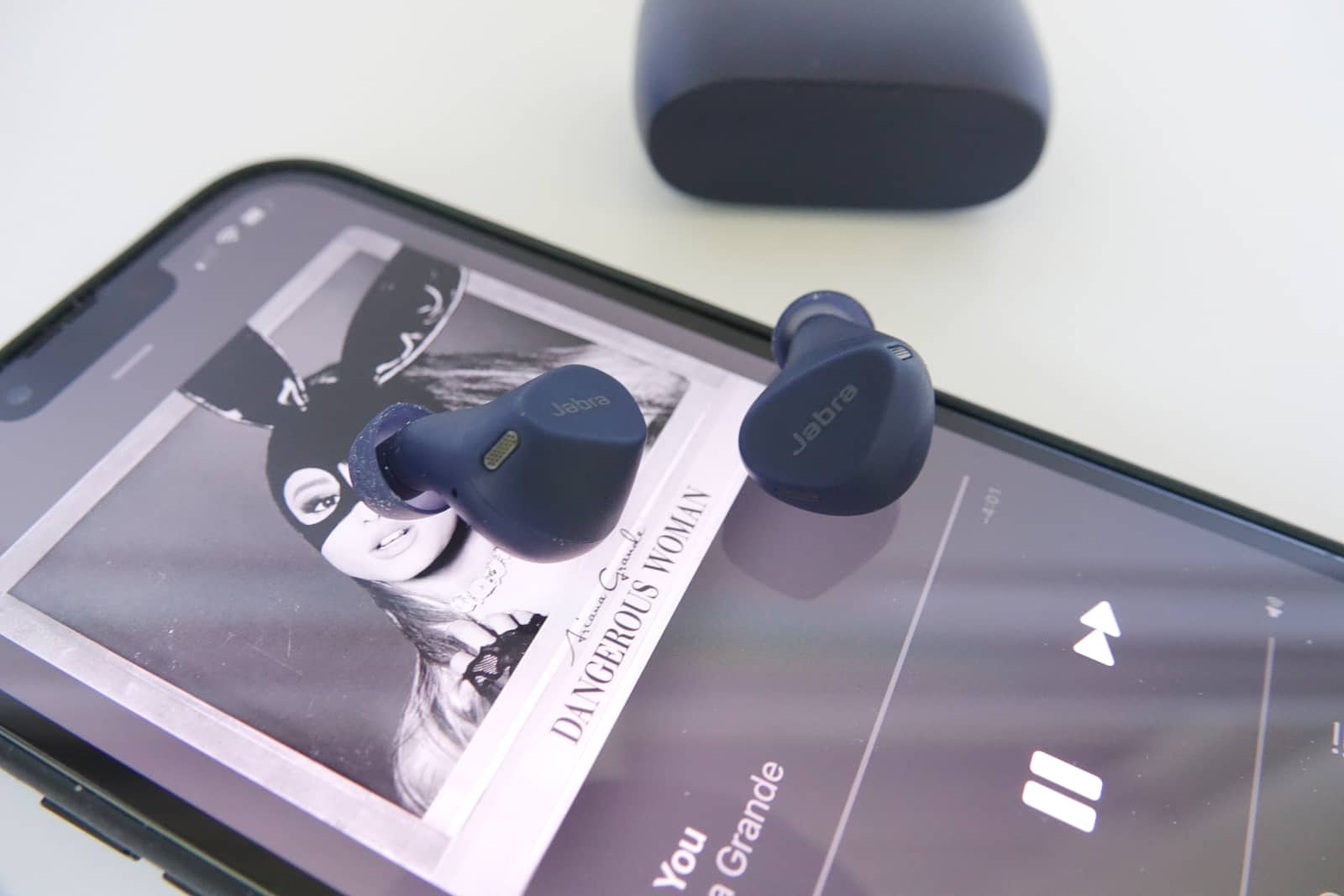 If we had to say anything about Jabra’s Elite 4 Active, the point about value would likely be the punchline: these are great value and then some.

We were fans of the app-connected Elite 3, but they went without ANC, providing enough of the earphone experience Jabra is known for without the premium extra that noise cancellation brings. That’s where the Elite 4 Active fits, bolstering what is basically the same design with a bit more water resistance and support for noise cancellation.

And it works. It’s really enough for the $179 price point, achieving a great balance of feature and value.

Granted, Jabra’s Elite 4 Active aren’t competing on price in quite the same way as every earphone player, because you can still find noise cancelling earphones at better prices overall. The EarFun Air Pro lack the app and deliver ANC earphones for below $130, while the Nothing Ear1 offers the app for just under $150. There’s clearly a market where noise cancelling earphones can come in under where even Jabra has modestly pitched the Elite 4 Active.

And yet these are still a fantastic balance and compromise. In the Jabra Elite 4 Active, you’ll find strong sound, a great transparency mode, a little bit of cancellation, support with an app, and a price that’s easily workable. Every little bit helps to make the Elite 4 Active one of the better choices for earphones below $200. Recommended. 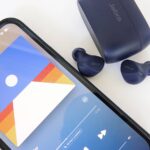