More than just another smartwatch, the Huawei Watch D delivers health technology in a way we’ve not seen before, and that’s really quite exciting.

With one obvious market leader in the world of smartwatches, it can be pretty easy to see many just following rather than creating their own spin on what you can do.

You don’t need to look far to see Apple currently taking the lead on wrist-based wearable gadgets, and many of the competitors are just spinning their own flavours of the template the maker of the Apple Watch has set out.

But not everyone is doing that. Some are actively trying to make their gadgets different, and the way to do that could be functionality rather than design. There’s probably only a few ways to really design a smartwatch, but to expand its purpose and goal, the sky’s the limit there.

With one of Huawei’s latest gadgets, the sky is truly in reach, as we see the once leading phone maker shift into wearables in a way that transcends the simple wearable use.

Beyond fashion and wrist-worn notifications, the Huawei Watch D aims to be useful for people who need more than the occasional health note, and need to be told important things about their vitals. 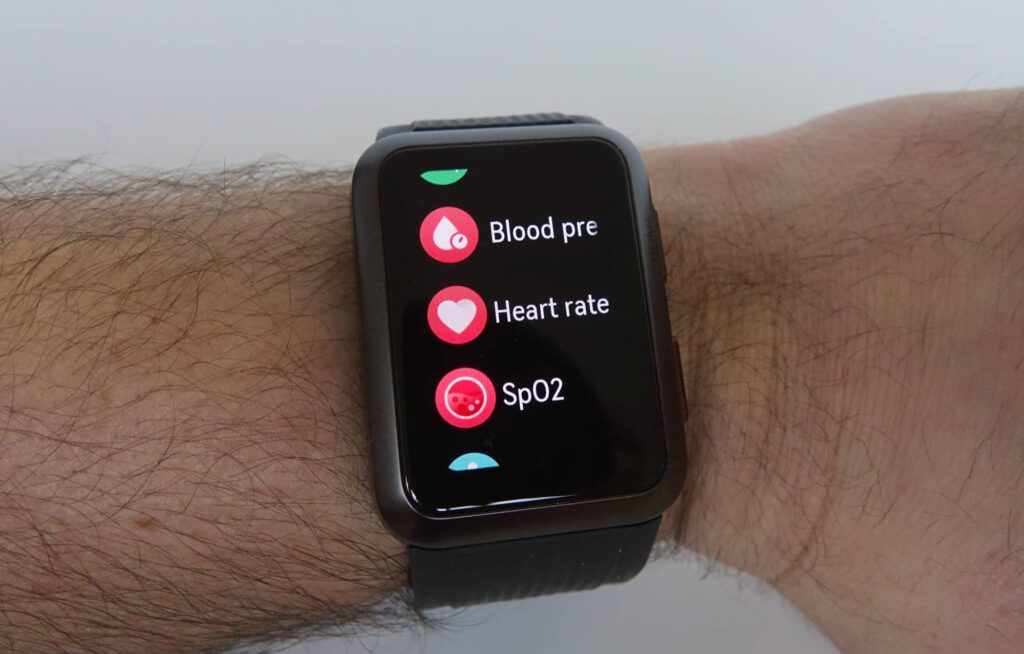 Another style of rectangular smartwatch available in Australia, the Watch D is a little different than other devices.

Upon first glance, it’s easy to mistake this wearable for pretty much everything else out there. Designed with another softened rectangle encased in an alloy and topped with glass, the Watch D doesn’t look spectacularly different, except maybe because it’s a touch thicker.

But there’s a little more going on under the hood than you might expect, as this wearable packs the health sensors. Inside, there’s an accelerometer, temperature sensor, and optical heart rate sensor, and there’s even a pressure sensor, because the Huawei Watch D can check your blood pressure.

Doing so isn’t just a feature of the sensor, because it needs special hardware for this: the straps. While a watch strap might normally be a matter of style, the straps on the Watch D come with inflatable airbags built into the inside edge, which inflate when the feature is triggered, and then check your blood pressure reading. You’ll get two straps with the watch, one larger and one smaller, and they need to be set at pretty firm when you use them.

That’s roughly the gist of the watch, though, with other features along for the ride, such as GPS, Bluetooth, and wireless charging, too. 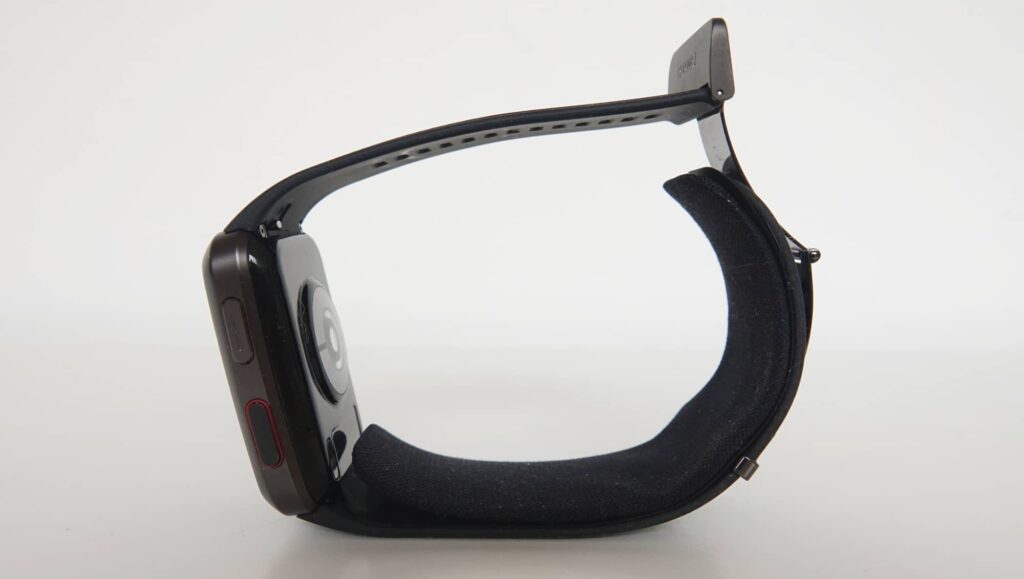 To use the Watch D, you’ll want to grab your phone and the Huawei Health app, because both are needed, but don’t worry, you don’t need a Huawei phone.

While the Watch D runs Huawei’s HarmonyOS operating system, you can use a more standard mobile OS such as iOS or Android, and get notifications working, plus the health featuring synchronising.

We tested with an iPhone 13 Pro Max, and found notifications worked rather seamlessly, though Huawei didn’t always pay attention to iOS focus modes, and notifications tended to move right on through. 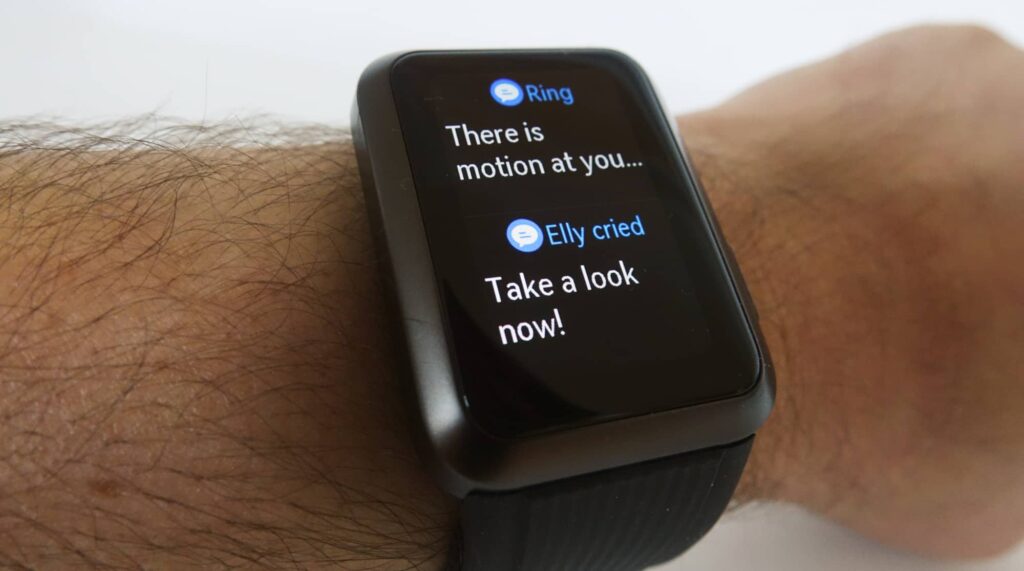 Using the Watch D is pretty simple — find the right setting on your watch band and strap it on — and then you’re good to go, letting it take its readings or tapping the screen and forcing it to, and it’s pretty responsive at that.

We found minimal delay jumping through the watch’s various screens, most of which are found on the one menu, which makes it easy to use, while you might see a hint of lag waiting for the watch face customisation screen to appear. Two buttons provide access to two sections of the watch, be it the top one for menu or the bottom for a shortcut, while the watch faces offer shortcuts, as well.

It’s pretty snappy to use regardless of what you pick, and there’s an instruction screen on nearly every major feature and function so you don’t need to go digging for a manual. Handy. 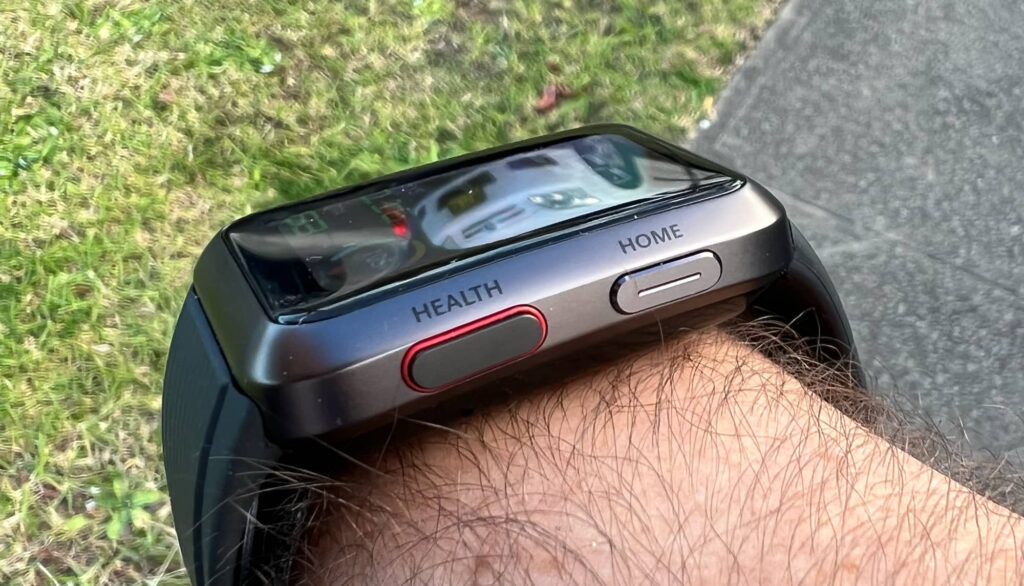 You’ll find quite a few features available to you, as well. Blood oxygen can be checked with the SpO2 sensor, heart rate checking does the regular green light trick, a temperature sensor for the skin temperature, plus sleep tracking, stress, and even a GPS built in if you decide to go for a run or a walk and want to track everything.

But then there’s the pièce de résistance: the blood pressure monitor, a feature that connects the hardware of the watch to hardware in the band, inflating around your wrist and checking things the way a standard cuff would do, except on your wrist, not your arm.

There’s something genuinely remarkable about what Huawei has achieved here, plonking a blood pressure cuff on a wrist, a place this journalist didn’t think you could test pressure at.

And yet, it works. Repeatedly. 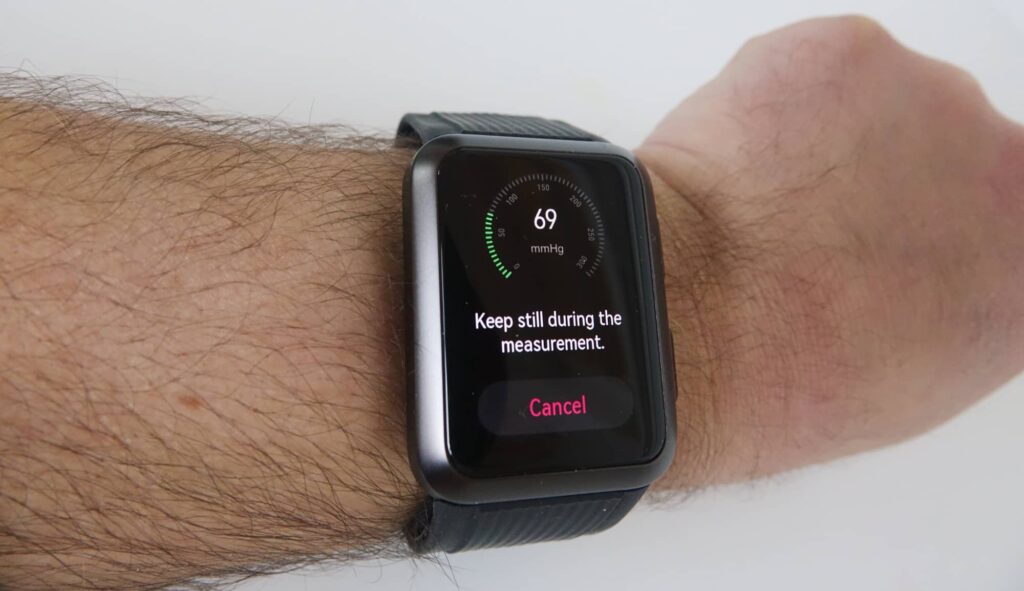 Run the blood pressure checker and the inside section of the Watch D’s wrist band will do exactly what you think it should, inflating and displaying an on-screen indicator of how much pressure is being applied to the wrist in milligrams.

Testing each found blood pressure readings within a reasonable margin of error, suggesting to this journalist that Huawei’s reading was about as accurate as it needed to be.

That is a solid result, not just because the technology means you can keep a blood pressure monitor with you without any extra hardware, but because it can be with you wherever and work just as well as the larger kind. It even supports a feature to let you add a guest reading, handy if your partner decides to try it out, as well.

Alongside that great blood pressure tracking feature, there’s a solid battery life in the Watch D, able to hit a maximum on 10 days, which in our tests didn’t seem far off, at all.

We managed a good seven days of life before feeling like we should plug it in, though we didn’t take advantage of the in-built GPS too often, and suspect if you do, should see markedly less life (a known factor with GPS in wearables).

That means the Watch D should survive a week of use with a regular user, and more importantly, shouldn’t force you to seek out a charger. You can just wear it and let it do its thing, checking your health and vitals, tracking sleep, all without needing to be near a charger nightly. 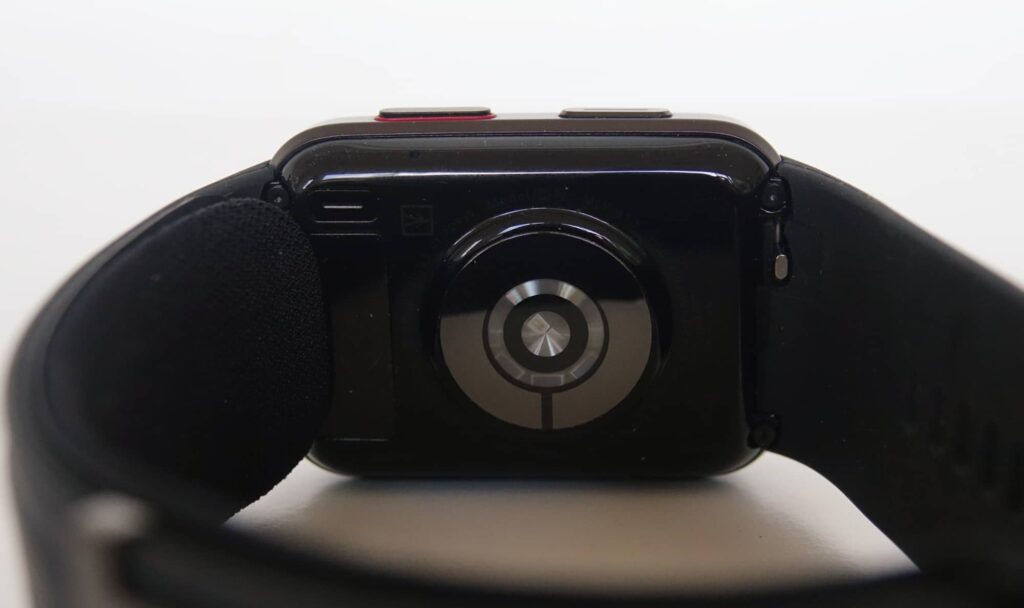 But you’ll have to pay for the privilege of having this tech close by, with the $799 Watch D price in Australia not exactly wallet friendly.

Priced like the Apple Watch Series 7 with GPS and mobile capabilities, the Watch D is relatively expensive and yet lacks the support for a 4G or 5G connection built in.

Granted, there’s really no reason to include the mobile capabilities here, because without apps to drive it, and no support for streaming in the watch over Spotify or the like, cellular connectivity would be wasted here. You are in essence paying for the health tech, with that blood pressure monitor the stand out feature.

Blood pressure monitors aren’t always known to be expensive, but they also mightn’t be inexpensive, either. Huawei is basically shrinking this technology to fit on your wrist, but as a result, the price has gone up from what is a similar design to its Fit 2 watch. Kinda sorta.

Beyond the price, one of the things we’d love Huawei to work on is the design.

Yes, it’s a smartwatch following the crowd, and there’s really only two ways about that: circular like Samsung or softened rectangles like Apple. Huawei has clearly chosen the latter with the Watch D, but the issue is the thickness.

Appearing more chunky than the Apple Watch Series 7, the Watch D measures 13.6mm thick versus Apple’s 10.7mm, which doesn’t seem like a lot, but also does when you’re used to one over the other. It’s the sort of chunky design that makes you feel like you’re wearing your grandpa’s watch and not something modern, which is just chunky enough to feel old rather sleek and cool.

We’re not sure how Huawei can get the Watch D2 — if there even is one — into a slightly smaller form-factor, but if it can, it will be closer to having a real winner on its blood pressure-tracked hands, and maybe a better selection of straps that don’t feel like they need to always be so tight they hug your wrists and hands.

Technically, the inflated section will always hug your wrists because blood pressure cuffs and monitors need to do that to check your vitals. But the strap feels like it could be better engineered, and suspect Huawei could improve on that, as well. 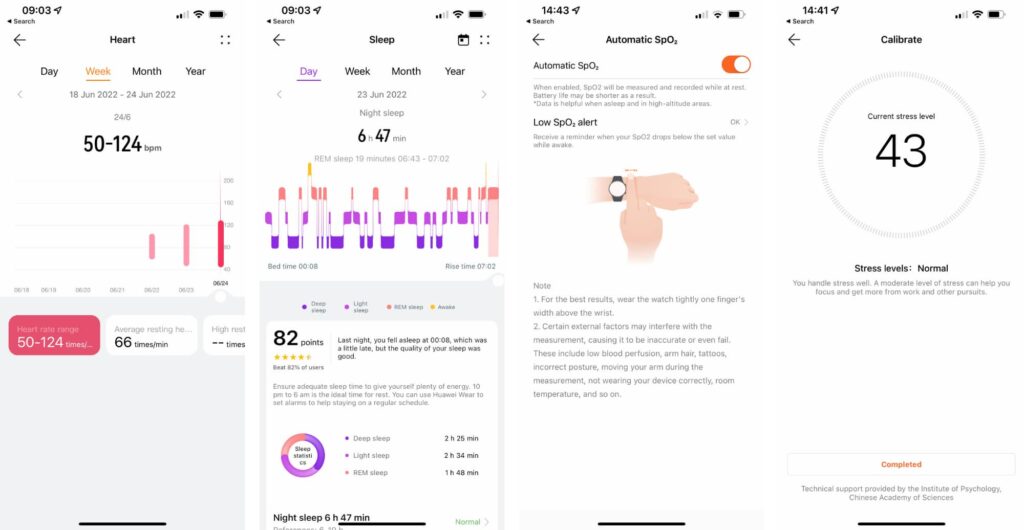 Our other issues with Huawei’s Watch D actually connect with Huawei’s other watch models we’ve seen prior, devices like the Watch GT 2, which still lack payment support in Australia (sigh) and don’t offer a whole lot in the way of watch face customisation.

The Watch D attempts to address some of the latter, at least, and provides a hint of customisation plus a store where you can get watch faces, but we’ve not been huge fans of much of what we’ve seen. Maybe if Huawei teamed up with a famed watch maker and built some specialist faces for its watch, there’d be more to work with here, but right now, the on-screen design feels like the side of things Huawei didn’t think too much about.

One more thing: Australians won’t find the ECG running on the Watch D locally. While the wearable technically includes an electrocardiograph, our time with it never showed the ECG app available on the device, suggesting Huawei hasn’t gone through the same motions every other wearable maker has locally.

Withings had its wearable ECG approved in by the Therapeutics Goods Administration in Australia first, followed by Apple, and then Samsung, and so on and so on. Not so with Huawei, it seems, because the Watch D has an ECG, it just doesn’t appear to work locally.

Despite the niggle here and there, Huawei’s Watch D is intriguing because it’s unique, and that’s something rare in the wearable world.

Incredibly insightful and likeable, the Huawei Watch D is different from the typical smartwatch crowd. It won’t win awards for its look, but it will grab attention from those who need their health tracker to do just that: track health.

And it is really great for that. For folks who need to check their blood pressure, heart rate, and a heap of other things, Huawei’s Watch D could be a game changer.

While you mightn’t recognise the brand on your wrist, you also may not care. There’s just something so compelling about being able to bring all of this together in the one place for people who really, genuinely need it. Recommended. 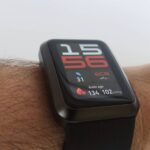 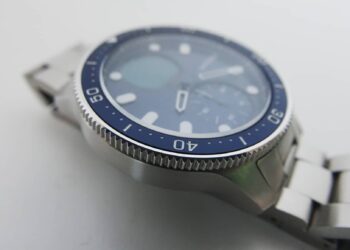