Not sure if earphones are right for you? Google’s Pixel Buds A-Series tread the balance on earbud, earphone, and even value. So what do they need to be perfect?

Weighing a mere five grams per bud and designed to fit in the ear with minimal fuss, Google’s Pixel Buds A-Series look a whole heap like the Pixel Buds we’ve seen before. You know, the ones that were truly wireless, not the weird corded variety that promised so much and delivered so little.

The A-Series are an update on 2020’s Pixel Buds 2, and while we’re a little late in finishing our review, they follow a similar design with a lighter colour scheme.

Forget they black, because these have a more grey look to them, with a simple bud design flanked on one side by a fin that’s supposed to hold in the flaps of the ear, while the earphone tip holds to your inner ear.

What’s going on underneath the plastic body of the Buds A-Series is a 12mm driver on each side with the tech supporting an easy connection to any phone, though Android devices are preferred, thanks in part to an app made only for Android.

Water resistant with an IPX4 rating, the Pixel Buds A-Series can be used for fitness and light walks in the rain, though don’t expect to go for a hefty run in a storm or even a swim. These are water resistant, not water proof.

Sticking them in, you’ll find you may need to rotate them slightly to get them in place. It’s an easy task, and once you do, the A-Series can actually get a semi-decent seal, giving you audio without as much external interference.

The result is comfortable, with that quick turn helping the Pixel Buds A-Series to nestle in the ear well, allowing you to hear what’s going on inside, less so on the outside.

Controls on the Buds aren’t overwhelming and bring things back to basics, with simple taps for pause, play, and skip functions, or even to bring up your favourite assistant, which on Android is pretty much just going to likely leave you with Google. Hey Google.

Comfortable and user friendly, the only thing left is to test out the performance of the Pixel Buds A-Series, and for that, we turn as always to the Pickr Sound Test, which you can listen to for yourself on Spotify, Apple Music, YouTube Music, or even Tidal.

For us, that starts with the electronic sounds of Tycho followed by Daft Punk, offering a comfortable sound that’s detailed and surprisingly spacious, rendering lovely mids and highs, while the bass feels slightly behind everything. It’s still there, but the impact is a little less than a thud, and less the punch we’re looking for. Not absent, just not as impactful as you might have hoped. 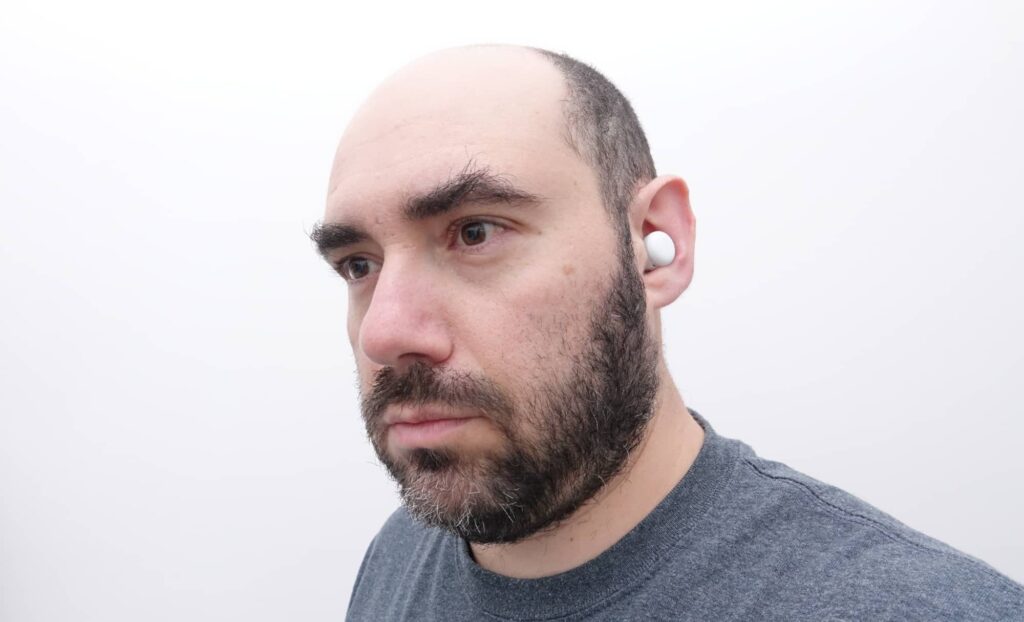 To push it a little harder, we switch to the app, which is only available on Android, and offers a bass boosting mode. With that on, the low end suddenly offers more impact in the likes of Carly Rae Jepsen and Mark Ronson, providing punch amidst a sound that is otherwise confident.

You won’t find the bass reverberate the walls of your brain the way you might think, and even with bass boost switched on, the guttural sound of FKA Twigs’ “Two Weeks” offered presence, but not as much compared with other earphones.

It’s an acceptably chilled rendition of the songs we tune in to, with similar presence in rock, as Muse and the Deftones deliver bass, but not enough to make you feel as if you’re part of the music.

Overall, the sound delivered in the Pixel Buds A-Series is balanced albeit slightly relaxed. This isn’t the warm sound offered through earphones by either Sony or Bang & Olufsen. Rather, it’s close to being balanced, without leaning too hard on the bottom end. And if you leave bass boost off, it’s clearly more chilled out, begging you to switch it on and feel something, ever so slightly, anyway. 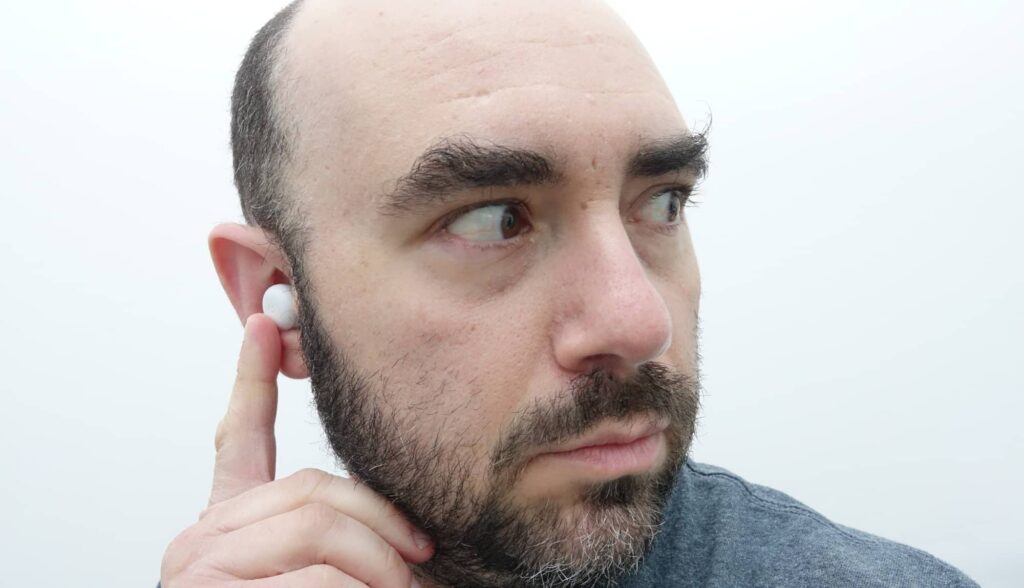 For a pair of truly wireless earphones, Google’s A-Series doesn’t fare too badly in terms of battery life, either, though there are better options out there.

You can find up to 5 hours of life before a charge, though talking on the phone will eat into that, while the case itself offers a good 4 more charges, with the total time running around the 24 hour mark. We don’t think you’ll be using the Pixel Buds A-Series all the time, so there are sure to be moments you’ll throw the buds in the compact magnetic case, which is very easy to carry, too.

But even if the battery life could be a little better, the price is certainly right, competing with the low-end to mid-range quite nicely.

While you can find truly wireless earphone options from name brands below the $100 mark, Google’s play for the space at $159 and seen as low as $129 isn’t a bad effort overall.

Perhaps its only downside maybe the lack of active noise cancellation, which can be found around the $159 mark, and even lower. Compared to Jabra’s $179 Elite 4 Active, which is only a smidge higher, you’re basically just skimping out on noise cancellation, which would have improved the overall package, and that’s without mentioning the obvious competition from Nothing’s Ear 1. 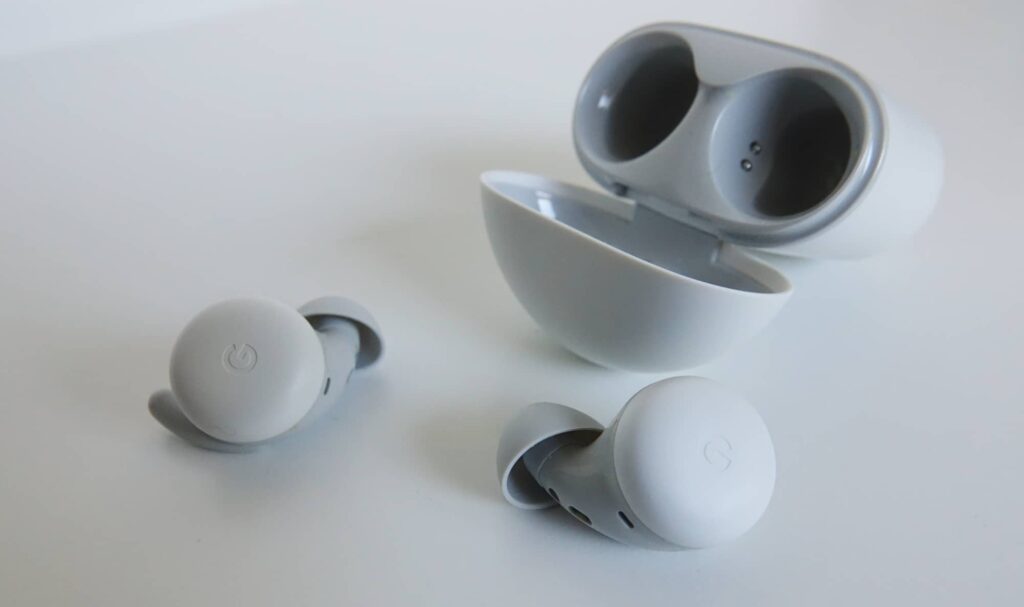 Active noise cancellation would have clearly helped the overall package on the Pixel Buds A-Series, but it’s not the only thing.

The bass is one area where we have mixed feelings, and think Google could actually seriously make some improvements

As it is, you can’t get that extra bass on an iPhone because it needs the Android app to work, which means the bass is thoroughly ordinary for iPhone. There’s really no reason why this app couldn’t be brought to the iPhone, beyond, well, Google hasn’t.

The app doesn’t seem to afford you much extra, either, though “adaptive sound” is a feature, even if it’s not one we’re too thrilled with.

You might see the name “adaptive sound” and think “hey, this is going to be adaptive noise cancellation, great!” Only it’s not. 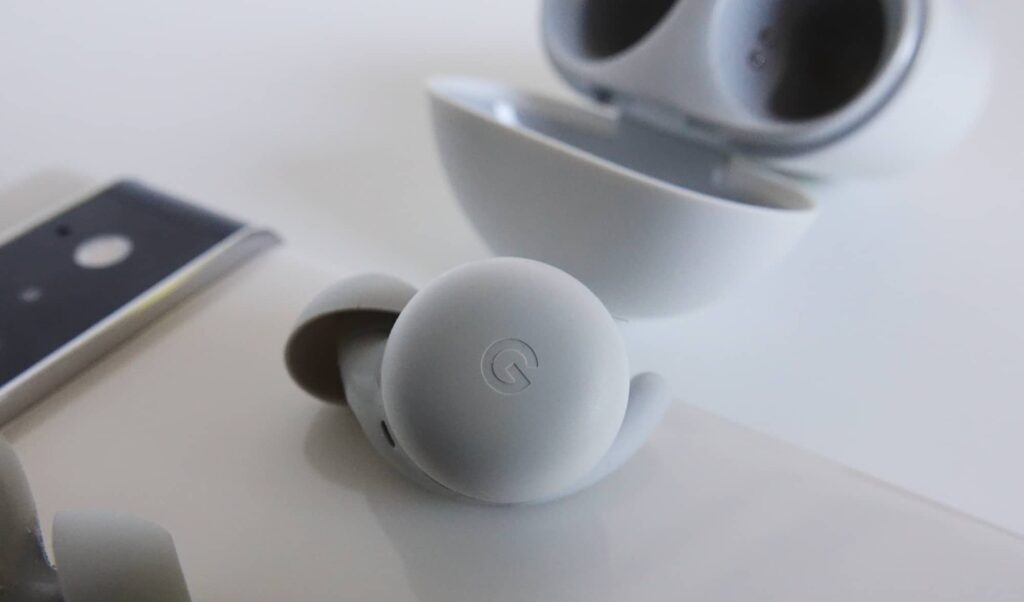 Either way, adaptive sound is a bit of a failure, and we found ourselves controlling the volume by hand because adaptive sound was no more adaptive than our own ability to control the volume. We were adapting the sound better than Google.

The lack of an app that works on iPhone is also a miss from the big G. Seriously, it has the resources to make phones and apps and search engine and earphones, but not an audio app for the iPhone? That’s a surprise, especially given some of those features can only be controlled by said app. 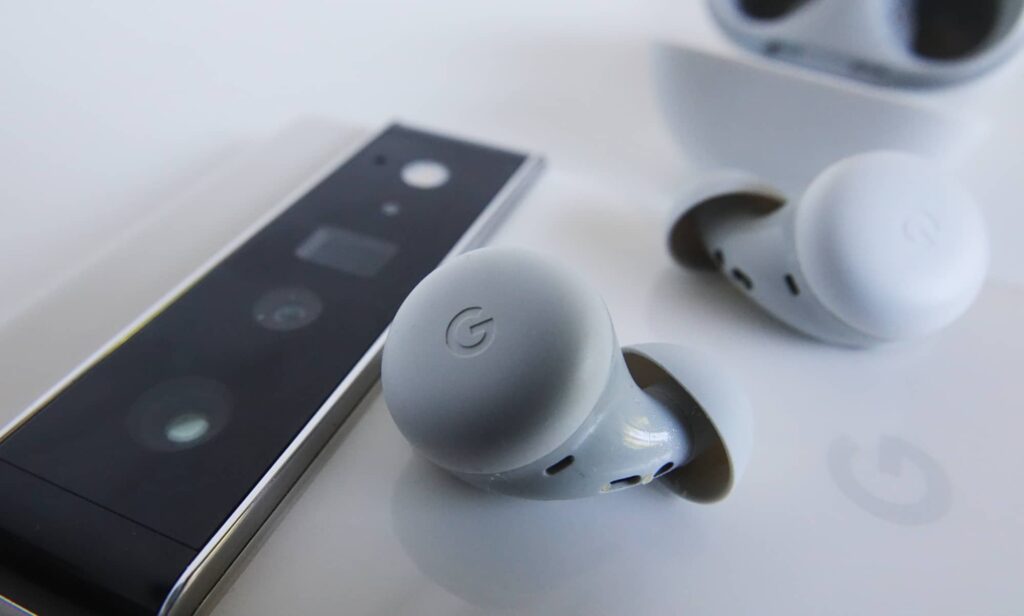 Google’s attempt at the Pixel Buds A-Series is an intriguing offer and an attempt to compromise. On the one hand, there are features missing that you could get on just about any other earphone maker, and yet the other… these things are just so darn comfortable.

The lack of noise cancellation feels like an oversight, but the comfort, sound, and value is actually not bad, and you just know where the third generation of this pair is going. In version 3 — presumably the Pixel Buds 3 or Pixel Buds B-Series — an updated noise cancelling model will be the bee’s knees, if Google can get it right.

For now, the Pixel Buds A-Series are a worthwhile option specifically focused on folks in the Android world looking for something comfortable that delivers great sound, and aren’t keen on forking out big dollar bucks to make it happen. There are things that could be improved, but there’s a definite pair to consider here. It’s an A for all-rounder, and that’s not half bad. 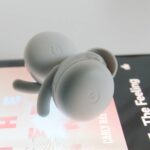