Fixing your WiFi at home isn’t always easy, but D-Link’s WiFi 6 mesh networking COVR-X1873 could just be one of the best solutions yet. Find out why in our review.

One of D-Link’s recent wireless mesh networking solutions, the COVR-X1873 is an 802.11ax wireless networking setup reliant on the “WiFi 6” protocol and using an AX1800 chipset. That means you’ll have roughly 1800Mbps of performance, though it splits between 1200Mbps and 574Mbps, dependent on the network spectrum you’re using, 5GHz or 2.4GHz, respectively.

Hopefully you won’t have to think about it, which is largely the point of mesh systems like this, managing your network activity for you and sending you around the home network by way of technologies such as Multi-user Multiple-In Multiple-Out (MU-MIMO) to allow multiple devices to talk to a single point back and forth, while Smart Steering moves your device to and from the right band to keep your experience somewhat lag free.

They’re two examples of some of the tech inside the COVR-X1873, which uses the two bands of 2.4GHz and 5GHz on WiFi 6 (as opposed to the three on WiFi 6e) to spread the range and bandwidth around your home. 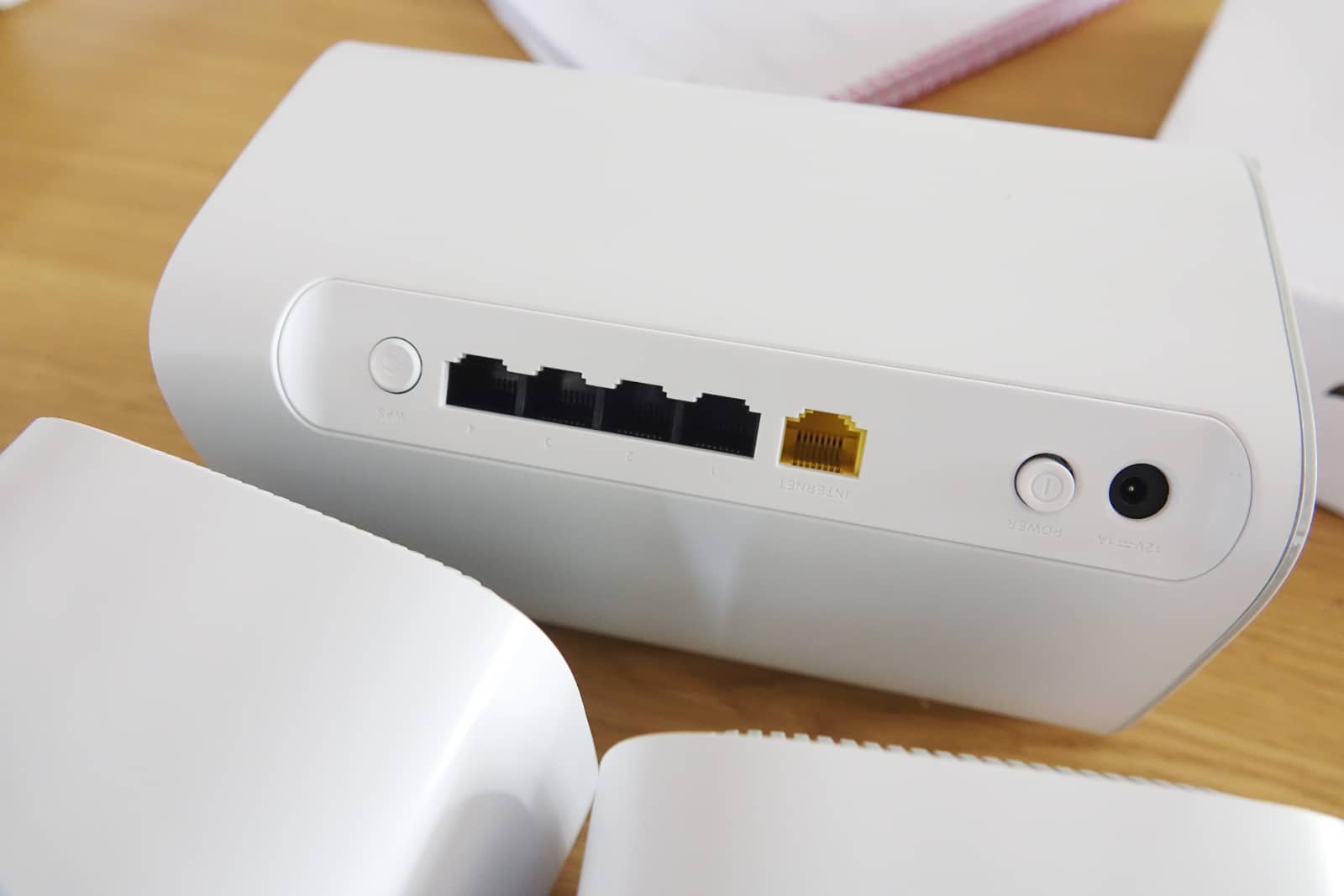 While its name might read like a secret government aircraft ready to burst its way out of a secret government facility, D-Link’s COVR-X1873 is less about the airspace above your home and more about making use of the space inside your home, effectively turning all that empty space into active WiFi range and use.

Inside each mesh point is the tech needed for a WiFi 6 network, relying on the AX1800 tech to create what is in essence a Venn diagram of wireless activity inside your home.

To make a mesh network work well — any mesh network, not just this one — you simply position the points of its mesh system around your home in key places, creating circles of wireless range that overlap, and allow your system to act as a traffic controller, designating where your device is talking to when you walk around your home.

It means that instead of relying on one centralised focal point of network activity — something that a single router or modem router would do — you’re instead having your device bounce around from access point to access point, and the mesh network is redirecting its location to the right place beneficial for your device.

In short, a mesh network turns the space inside your home into a massive map of network activity, and with the COVR-X1873, D-Link is doing that with a WiFi 6 connection, giving you that 802.11ax technology, but with backwards compatibility for other wireless standards, as well.

In our box, we found three mesh points waiting for us to use, each with four ports for wired Gigabit Ethernet devices, which helped add that wireless connection to devices that needed to stay wired, such as our network storage, the Arlo base station, and the Philips Hue switch for the WiFi lights in our home.

With all of it connected, and three points active, the network suddenly became stronger, and it was surprisingly easy to setup, too.

Plug any one of the three points in, connect to the default WiFi network, and scan a QR code on a card (which is also where the network details are), and you’re good to go, more or less letting D-Link take control of the process, merely telling it your internet provider and letting the system do its thing. Change the network details and wait a few minutes, and your mesh network will be up, albeit with one access point.

From there, you really just need to plug in the other two (or how many you need — you can use just the one or two), and select add device, having it look for the device and sync it up with your network, bolstering the mesh without any extra support of your own.

Overall, the COVR-X1873 is easy to set up, and provides efficient WiFi in a jiffy, even going a little further with the abundance of ports on offer.

With one mesh point, we were able to unplug and pack up the little network switch we’d been using to expand our regular Google Nest mesh point, which normally only lets one thing connect to its hardware. But not this one, which gives us four spots. Fantastic.

Better, it gives you four ports per mesh network point, handy if you want to use wired networking around the TV or with a few computers in the office, and you want that location to be a pillar to strengthen your mesh network. Simply set one of the COVR points there, and then plug in your devices to one of the four Gigabit Ethernet ports. Easy.

Once everything is all talking, you’ll find roughly 1.8Gbps of bandwidth to work with, dividing between plenty of devices, which in our test hit around the 40 amount and didn’t struggle at all. In fact, our Apple TV 4K felt like it was delivering faster picture than the Google Nest WiFi mesh system we were using previously, while devices seemed to latch onto the web more efficiently, as well. 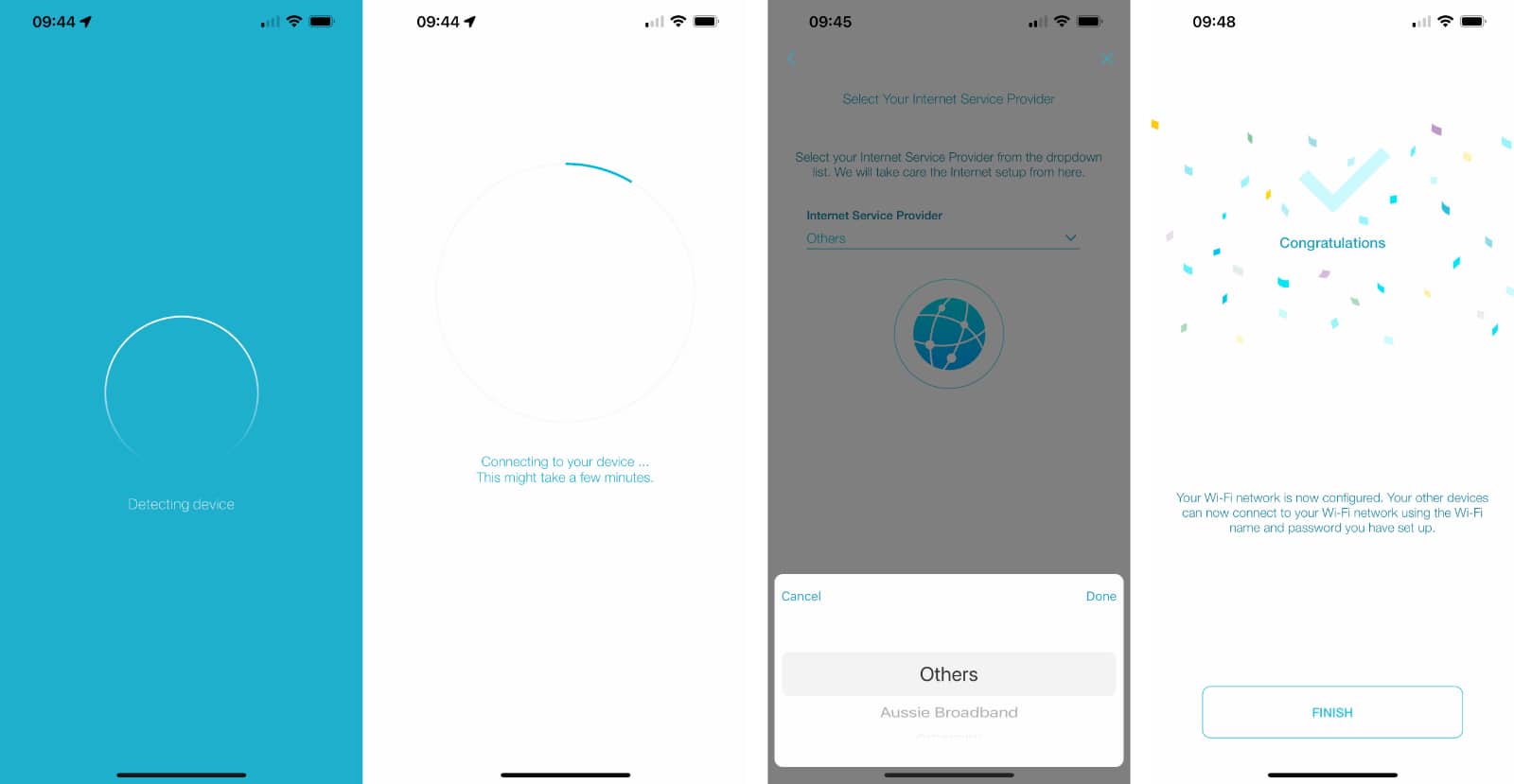 To D-Link’s credit, the hardware is top notch, with super fast 802.11ax WiFi 6 technology, easy setup, and some great range, to boot.

But there are two areas that need a little bit of work. Minor work, but still work, all the same: the cable length and the app.

The app is easy, because while it’s very minimalist, it may be so minimalist that it doesn’t afford much customisation. Three main menus to scroll between to let you show what’s accessing your network, a screen to show your password, and the ability to pause all traffic.

Great, but there’s no way to customise the screen. Heaven forbid you wanted a Quality of Service screen to designate priorities or a screen to turn on Guest WiFi in a jiffy. You don’t get it, because while you do get support for both Amazon Alexa and the Google Assistant for a modicum of voice control, you don’t get an app that offers all that much flexibility. It’s not even all that easy to link up your extra mesh networking points and feels a little clunky, pointing to the area of software that D-Link really could do better in. 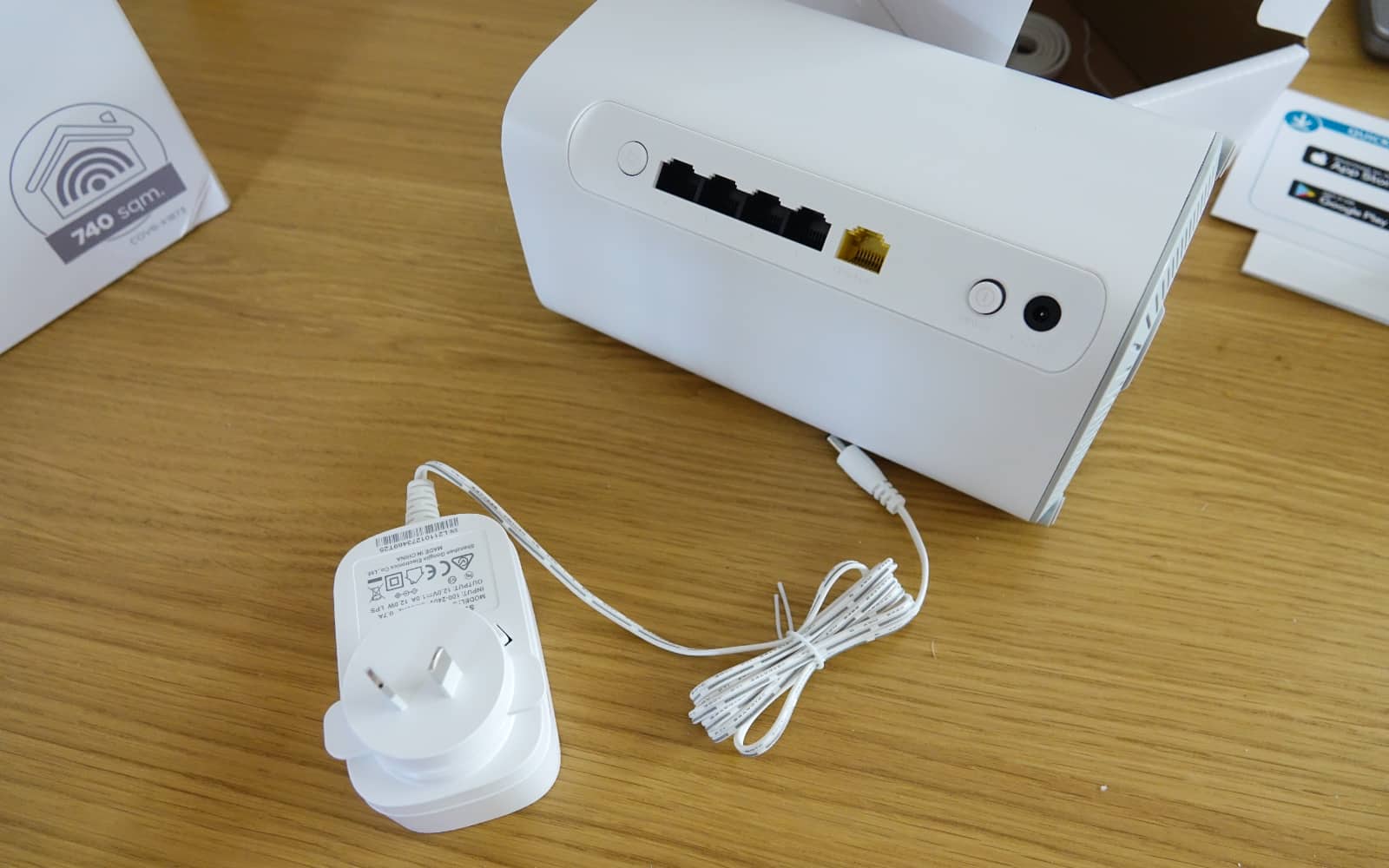 Our one other quibble with the D-Link COVR-X1873 is the length of the cables: at a metre, they’re genuinely paltry and more length is needed.

The point of mesh devices is to be able to place them around your home to improve the wireless reach and create a sort of Venn diagram of network activity. That’s great. Except for that the maximum one metre reach of D-Link’s power cables means you have to be really quite close to a power plug to make the connection. If your port is close to the ground and you want it on a shelf, you’re kind of out of luck, as D-Link doesn’t offer you a whole heap of reach, frustratingly.

The plug issue is our one fiddly issue, and forced us to re-evaluate how we set up our networking equipment, reaching behind several shelves and reordering gadgets in the process.

But when we were done, the price of doing business with the COVR-X1873 was justified.

At a price of $550 in Australia for three units, the WiFi 6 mesh networking on offer from D-Link not only delivered improved wireless reach in the home, but better speed, as well.

And the inclusion of four Gigabit Ethernet ports on every COVR AX mesh point was a major drawcard for this reviewer, providing a way to plug stuff in when you needed it. 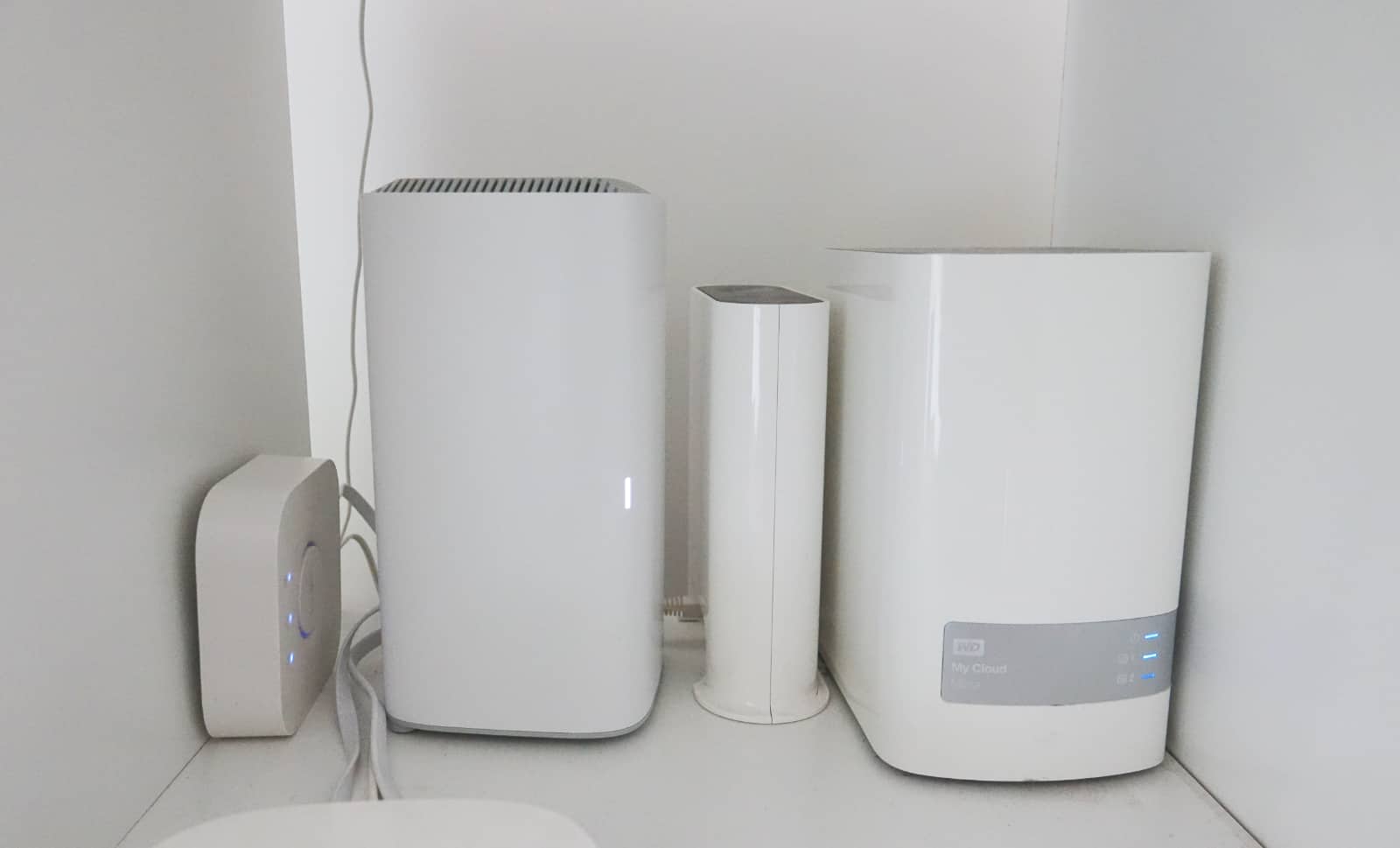 Even with some software bugs and plug length woes, the D-Link COVR-X1873 is an excellent network option, providing a way to amend home networking setups in more or less one hit.

This is convenient and considerate networking hardware at its finest. D-Link gives you everything you could possibly need in a mesh system, with speed and expandability, something most mesh gear doesn’t always cater for. Recommended. 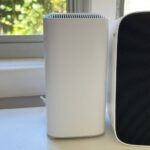 D-Link COVR-X1873 WiFi 6 mesh networking system
The good
Very fast
Easy install
Every mesh point includes a four-port switch
Will help you do away with any extra switches you might have in your home
The not-so-good
App can be quite clunky
Power cables are far too short
4.5