With a green laser and a special dust counter sensor inside, the Dyson V15 Detect isn’t your regular vacuum. And it’s pretty impressive, too.

The vacuum cleaner may well be something we rely on regularly, but it has changed a lot over the years. Invented in the 19th century, it’s a concept that has understandably become much smaller throughout the years, but also more capable.

We all know what these are, and we all probably have one in our homes. At least one. You might have more depending on how large your home is, but the idea is still the same: suck up all the dust and clean your home.

Vacuums get faster and hold more and become way more portable, and you may even find your way to a robotic one, but the idea is still the same: suction cleans your home.

Back in the 80s, James Dyson made a name for himself and subsequently launched what would become the Dyson company by revolutionising the way vacuums captured, using cyclones to capture and separate particles. It’s a concept that has been in Dyson vacuums since and still is to this day, but Dyson may well be seeing an evolution in its latest model, the V15 Detect.

It’s a vacuum that will draw you in for the green laser head, but will keep you there because of what it actually does: it shows you how clean your house can be.

What is the Dyson V15 Detect?

Dyson’s latest take on the vacuum cleaner is a bit of a two-part solution. On the one hand, there’s a new specialty head that’ll get all the attention, and on the other, there’s something on the inside that can tell you just how good of a job the vacuum is doing.

On the outside, Dyson includes a green laser mounted to the side of the Slim Fluffy cleaner head, which can be switched on and off. When switched on, however, the green laser lights up a part of the floor at a 1.5 degree angle in front of the vacuum so you can see all the dust and particles you need to run the fluffy head over.

That’s just one of the head attachments you get, and it joins the high torque cleaning head — which doesn’t have a laser — as well as a dirt brush and a new hair screw tool that uses a conical shape to clear hair from its brush bar. 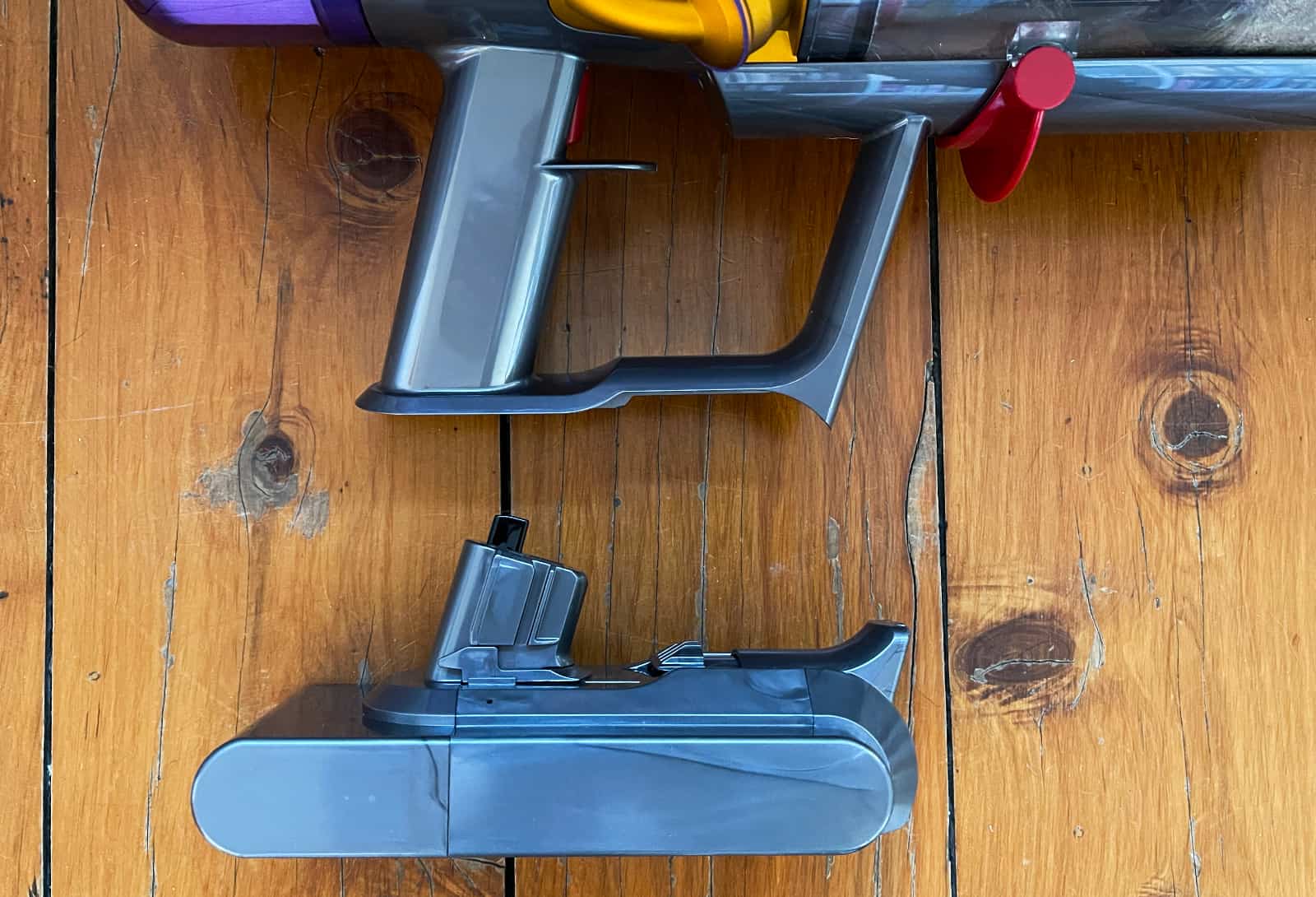 Inside that transparent Dyson barrel is a tiny acoustic sensor that measures the vibrations as dust enters the chamber. For every spick and speck and ounce of a particle that comes in, the sensor chimes a response at up to 15,000 times per second, and throws it on the display found on the back of the V15 Detect.

The smallest are in the graph in yellow, which each gradually moving up in orange, pink, and purple through a range of micrometer sizes. Ranging from around 10 microns (which are the same as micrometers) to above 500, it’s essentially a range of particles you can’t see to the particles you clearly can, such as pollen, mould, dust mites, and everything else. Dyson’s V15 Detect will not only suck these up, but tell you how much it has captured. 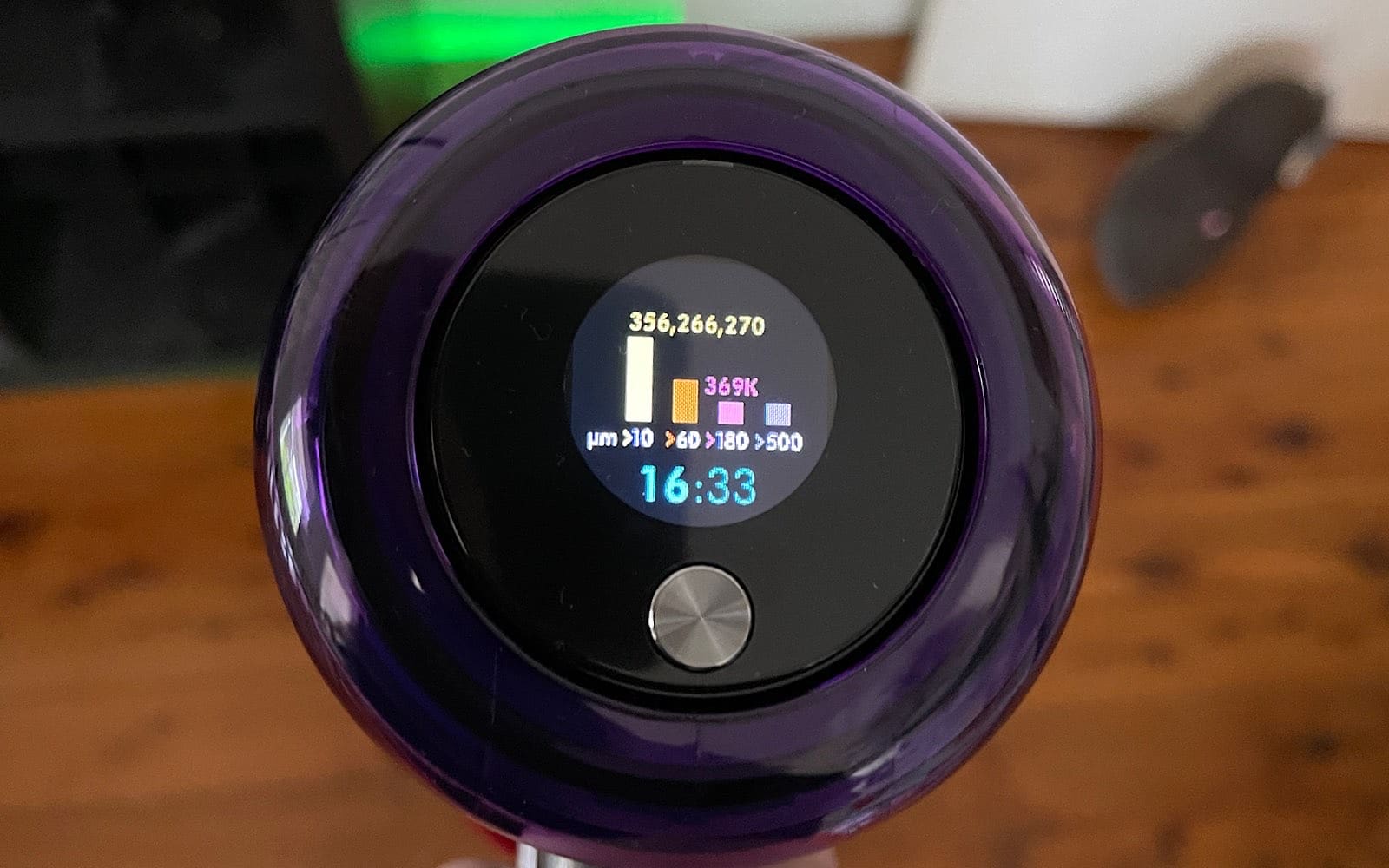 All that’s left to do is to use the vacuum, which itself is also improved upon prior generations.

Thanks to that special sensor, the motor will adapt to how much force you need and vary the speed, ranging from low to mid to high, producing 14 cyclones inside the vacuum to move particles around, hold them in the compartment, a mesh filter that keeps out larger particles, and a separate filter for even smaller particles again.

What does the Dyson V15 do?

This isn’t your ordinary stick vac for sure, but it definitely works just like one.

Point it at the dust on the ground, and it’ll suck it up. Use the special hair accessory and you can suck up excess hair without it tangling the accessory. Roll the specialty laser head over a section of the floor and that laser will shine its green light over every spot and speck and line of dust and hair, telling you to roll on past it and suck those bits up, too. Bristles and brushes will pick things up, move it, and suck it up on the barrel, and you will be cleaning your home of every fleck of something you can see, and even quite a few of the things you didn’t know were there.

But this vacuum also does something else: the Dyson V15 counts your dust, too. That’s new and really cool, even if it makes you feel a bit like a slob at points. 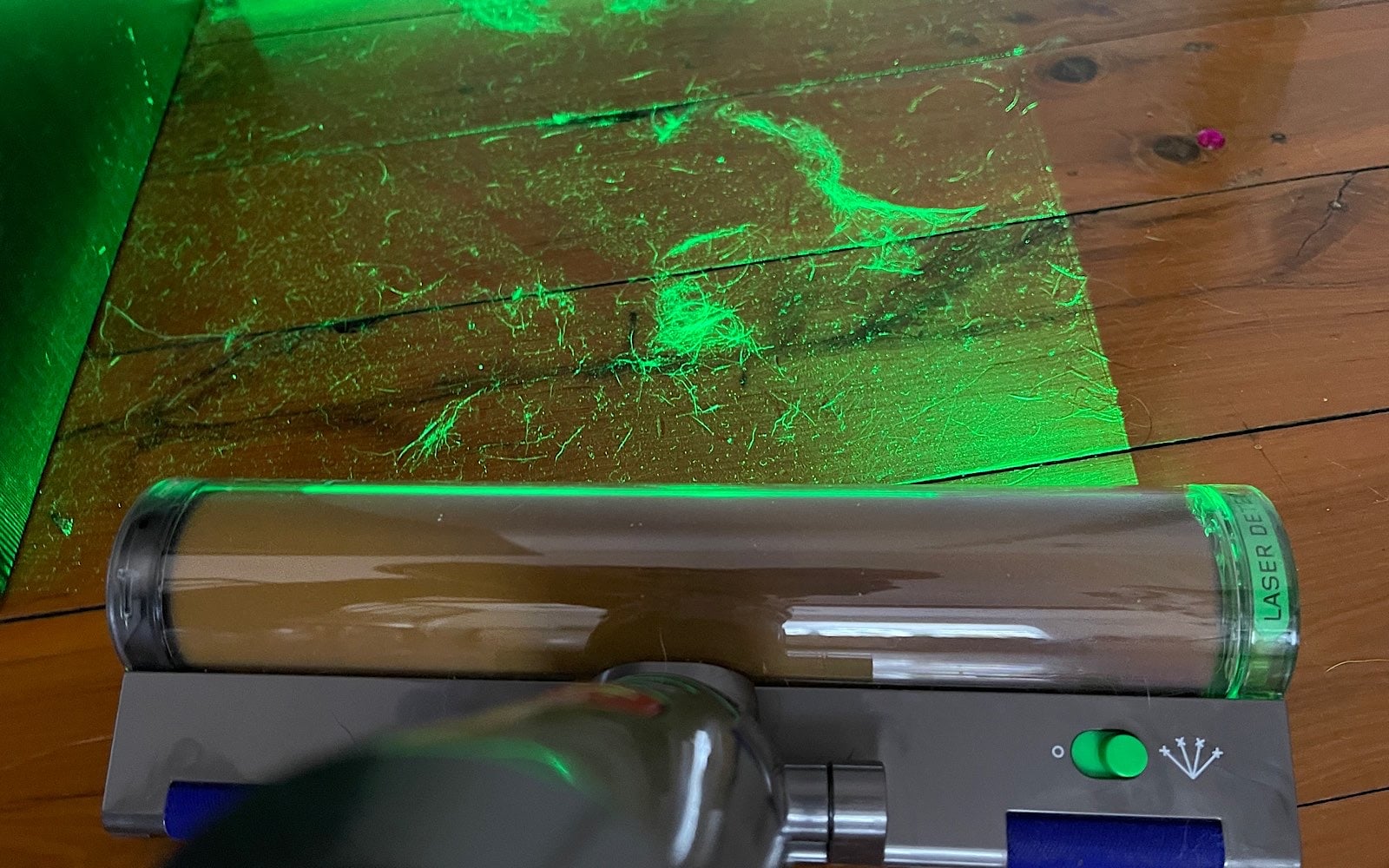 Our house is clean, as I’m sure yours is too, and yet, the Dyson V15 Detect can make you feel a little like you’ve never cleaned a day in your life simply by powering it on.

That’s thanks in part the tiny piezo sensor found on the inside of the chamber, which measures each tiny and slightly larger speck of dust, appearing in a graph.

It’s something very new for the world of vacuums, but also appears to gamify vacuum cleaners in a way we’ve not experienced before. Essentially, that graph becomes a bit of a challenge: how much dust can you find, and how much can you suck up?

You’ll do it without realising it, and the number will grow. You’ll see more and more dust that you didn’t know existed in your home, and the micrometer particle numbers will grow higher and higher, almost as if it were a high score on an arcade you just had to beat.

In case you’re wondering, it can stop. We tried to make it stop by holding the vacuum to our hands, and when it wasn’t sucking up any extra dust, the number didn’t raise. Not one bit.

So the number being tracked does appear to be legit, and there really is just that much microscopic stuff in our homes that we didn’t know we needed to capture.

It’s insane, and yet it does so much. The Dyson V15 Detect is cleaning on a level we didn’t know you could get.

The thing is, Dyson’s V15 does such a stellar job, you’d be hard-pressed trying to work out what it needs. It not only tells you how much you need to clean, shining a light on it, but also does about the best job of cleaning.

This is stellar. It’s a real game-changer.

About the only things we think Dyson could improve include the size of the dust bin — there’s no oversize model here — and that it’s a little on the expensive side.

The green light isn’t perfect, either, and feels like it doesn’t always do your floor or even the dust justice in broad daylight. You’ll need a little bit of darkness to make the light shine properly, it seems. 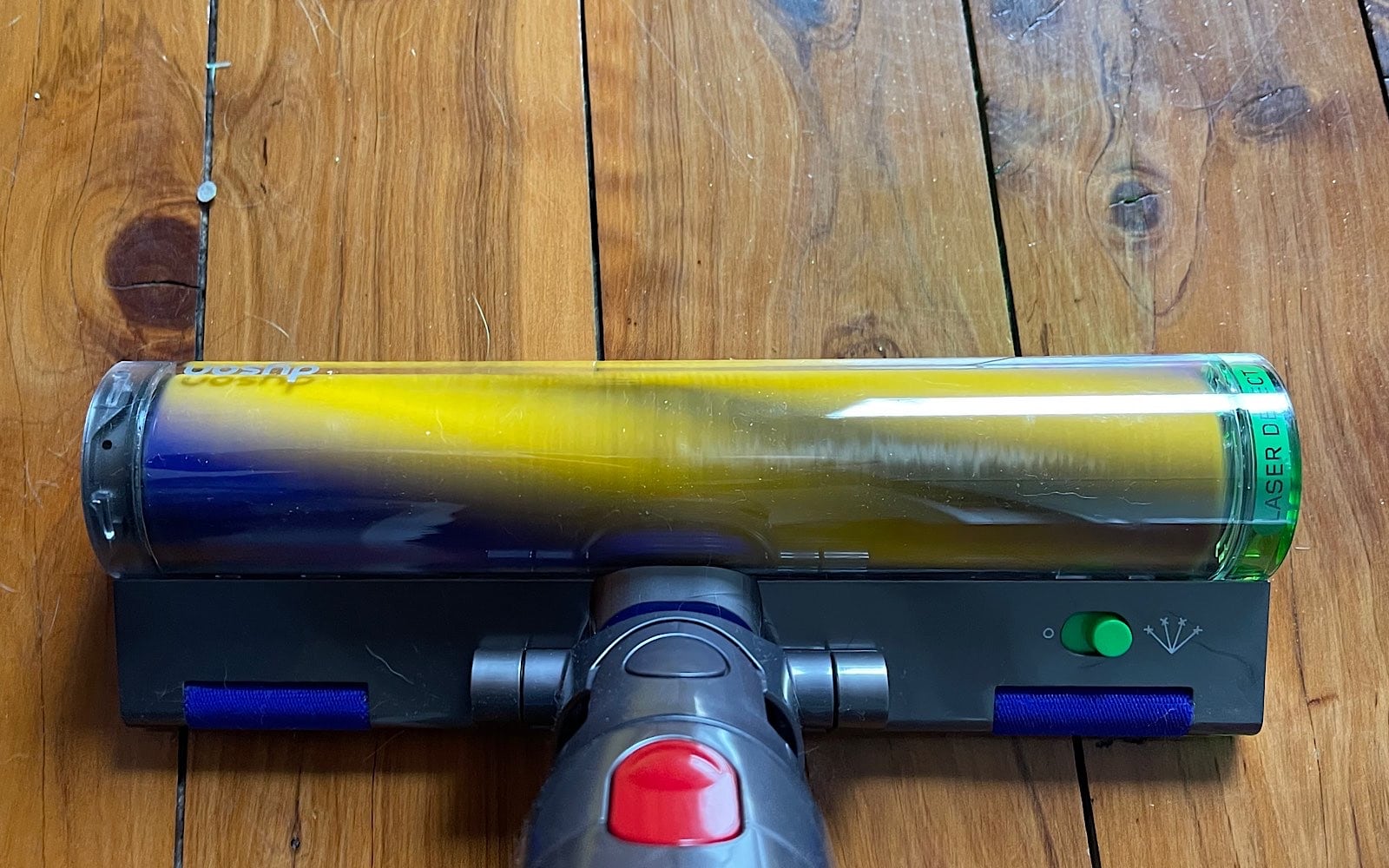 Is the Dyson V15 worth your money?

At $1399 in Australia, the Dyson V15 is not exactly inexpensive, ranking as one of the priciest vacuums you can find. There’s another variant of it that’s a little slimmer in the Dyson V12 Detect Slim, but priced from $1199, it’s not a dramatic difference in price. We’re still talking about a thousand dollar vacuum.

Of particular note is that the special laser head works across Dyson’s other vacuums. If you have an Outsize model or a V11, the laser head works, but you can’t buy it separately. As it is, the V11 still goes for $1099, so Dyson’s price difference isn’t a staggering increase on that model, and the V11 was released back in 2019.

Two years on, the V15 Detect feels like an upgrade that may well be worth that little bit extra.

You may not care about the monitoring of the extra dust, but the fact that this thing can actually suck up the tiniest of particles and tell you about it may end up helping you, especially if you or someone you live with has problems with allergens.

Dyson’s V15 Detect might not seem like a massive leap in vacuum technology — because you still have to do the work — but the fact that it can show you the results clearly, well that makes all the difference. 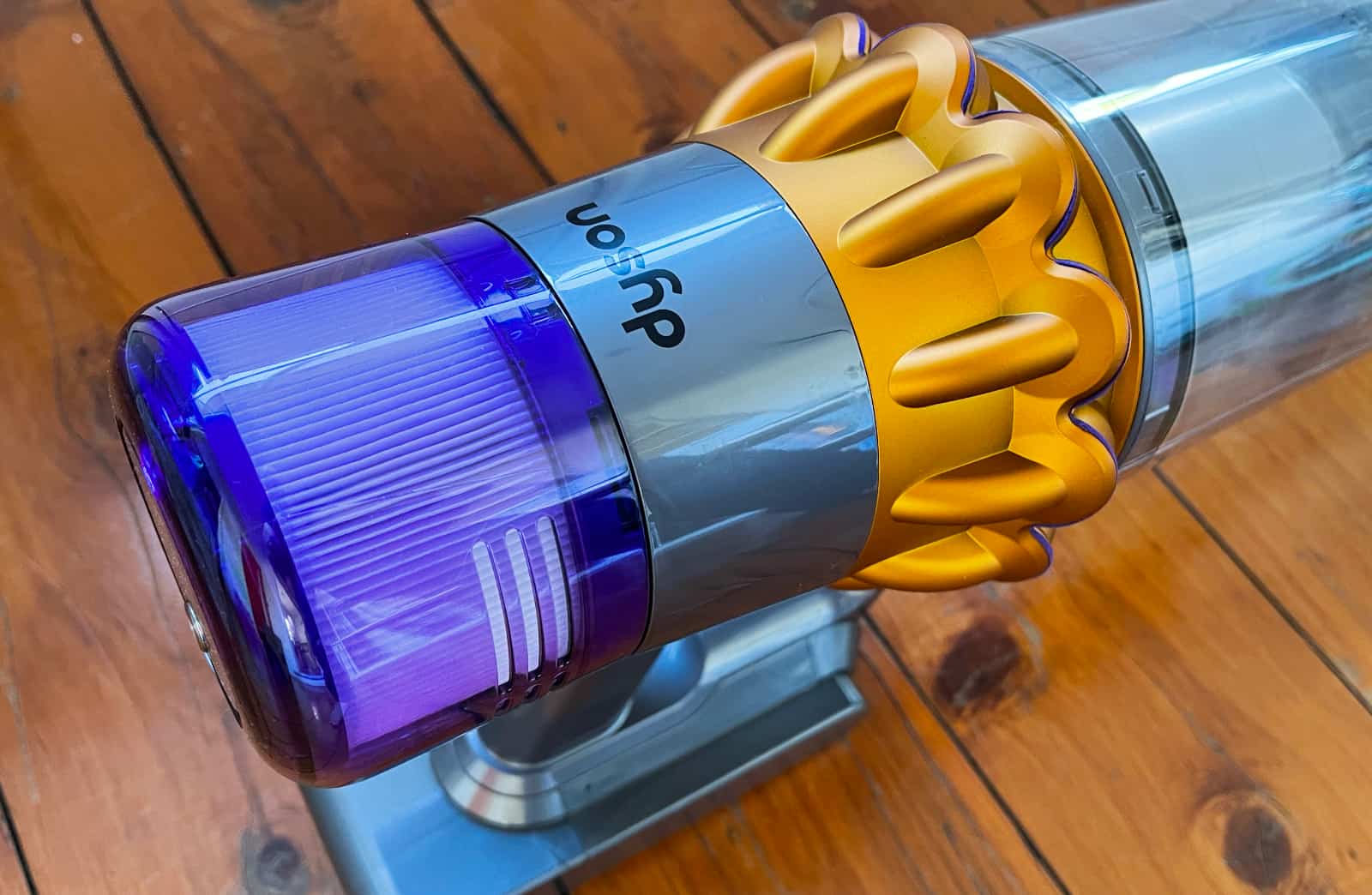 While the price is high, what you get for that price is nothing short of brilliant. This may well be the best vacuum on the market today.

The green laser light isn’t entirely perfect, but the V15 Detect gives you something we’ve not seen in a vacuum before: peace of mind. With this vacuum, you can tell quickly and easily if you’ve cleaned your home, whether it’s by shining a green light on the patches of your floor, or checking the graph at the back.

It’s a stellar inclusion for a stellar vacuum, and one that is easy to recommend. If you’re looking for something that offers proof that your home is clean beyond a slick and shiny surface, Dyson’s V15 Detect is worth checking out. Highly recommended.

Dyson V15 Detect
The good
It does a stellar job of cleaning
Dust counter is a tremendous way to gamify cleaning
Laser shines a light on dust you can't see when the light in your home isn't super bright
Comes with plenty of accessories
Replaceable battery
Laser head is also compatible with existing Dyson stick vacs (but not sold separately)
The not-so-good
Laser can be a little useless in daylight
The amount of dust counted can make you feel like a bit of a slob
Expensive
4.8 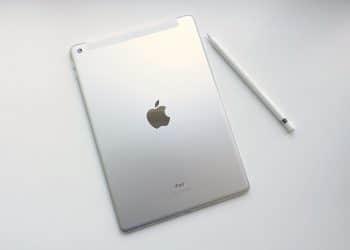