A new Google Home has arrived, but encased in a fuzzy fabric and meant for music, it’s also a little bit different. And at $149, it might just be an intro into smart home speakers for some.

Looking less like a speaker and more like a cute fabric-laden take on a book, the Google Nest Audio is a new variation on Google’s smart speakers. Less like the sloped cylinder of the original Google Home it replaces, and more like an evolution of the fabric-encased Google Nest Mini it sits alongside, the Nest Audio is a chance to reinvent Google’s smart home ambitions.

While the original offered more controls, it came out for a world just beginning to embrace the smart home, and so needed more obvious touch controls. Two years on, many more are ready for what the smart home represents, and are actively talking to their phones and speakers as if they were a friend already. 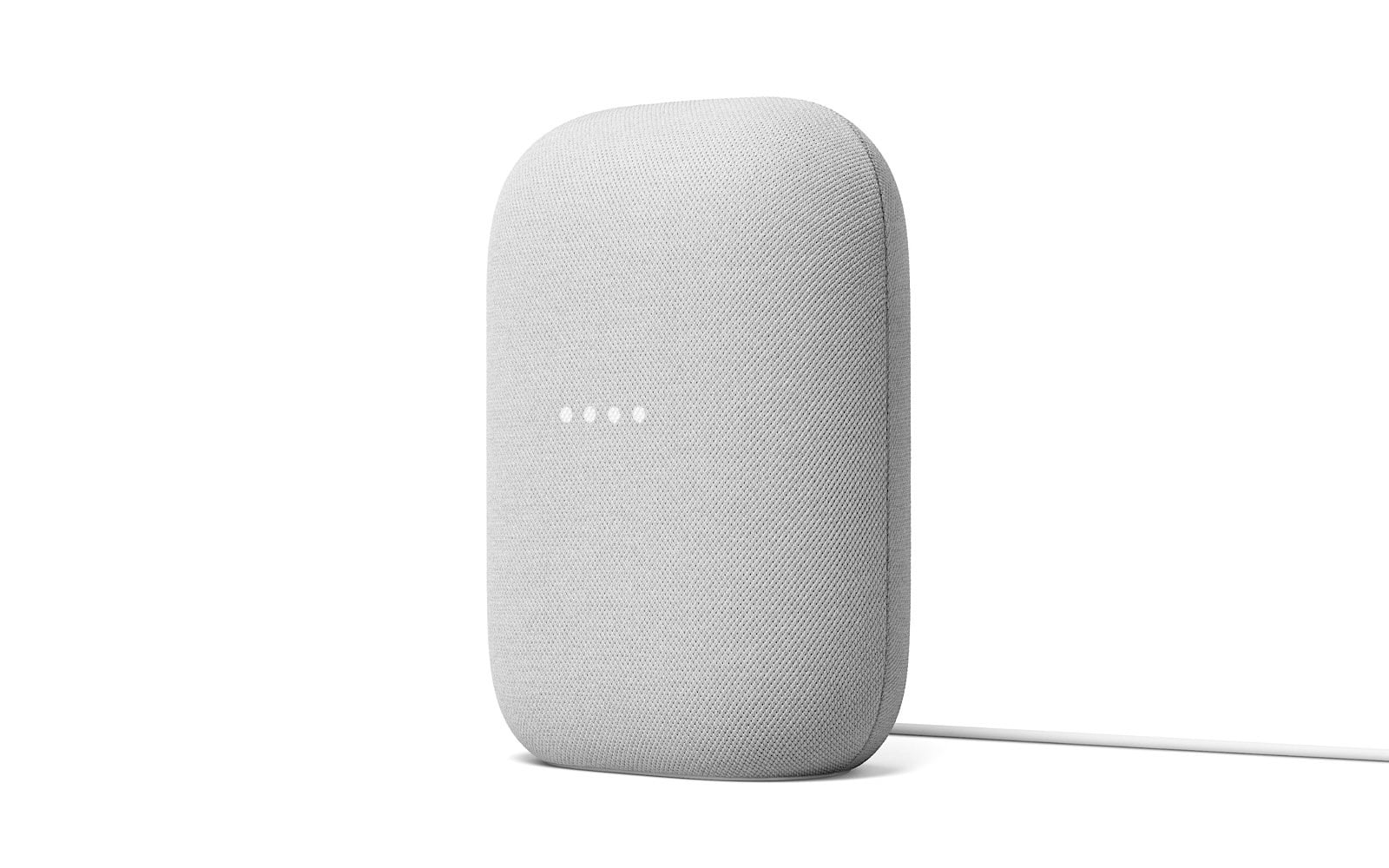 The Nest Audio is built with that in mind, and features a 19mm tweeter and a 75mm woofer, plus a bunch of software which comes together with three microphones to keep the speaker tuned to where you’re listening to it as well dealing with ambient sound.

We typically listen to our tracks with little else playing, but if you’re someone who runs the hair dryer or vacuum while you tune out, that might come in handy.

There’s also a microphone switch on the back of the Google Nest Audio, in case you don’t want the speaker to listen to you, but trigger that and you’ll lose one of the main ways to control this speaker.

Another one of Google’s smart speakers, controlling the Nest Audio is largely handled by your voice or your phone, though there is a way you can touch it and control it.

These are all examples of how the Google Nest Audio lets you control it, once you’ve gone through the setup using the Google Home app, which if you already have other Google speakers or smart displays will likely need less time than if you’re a newbie. 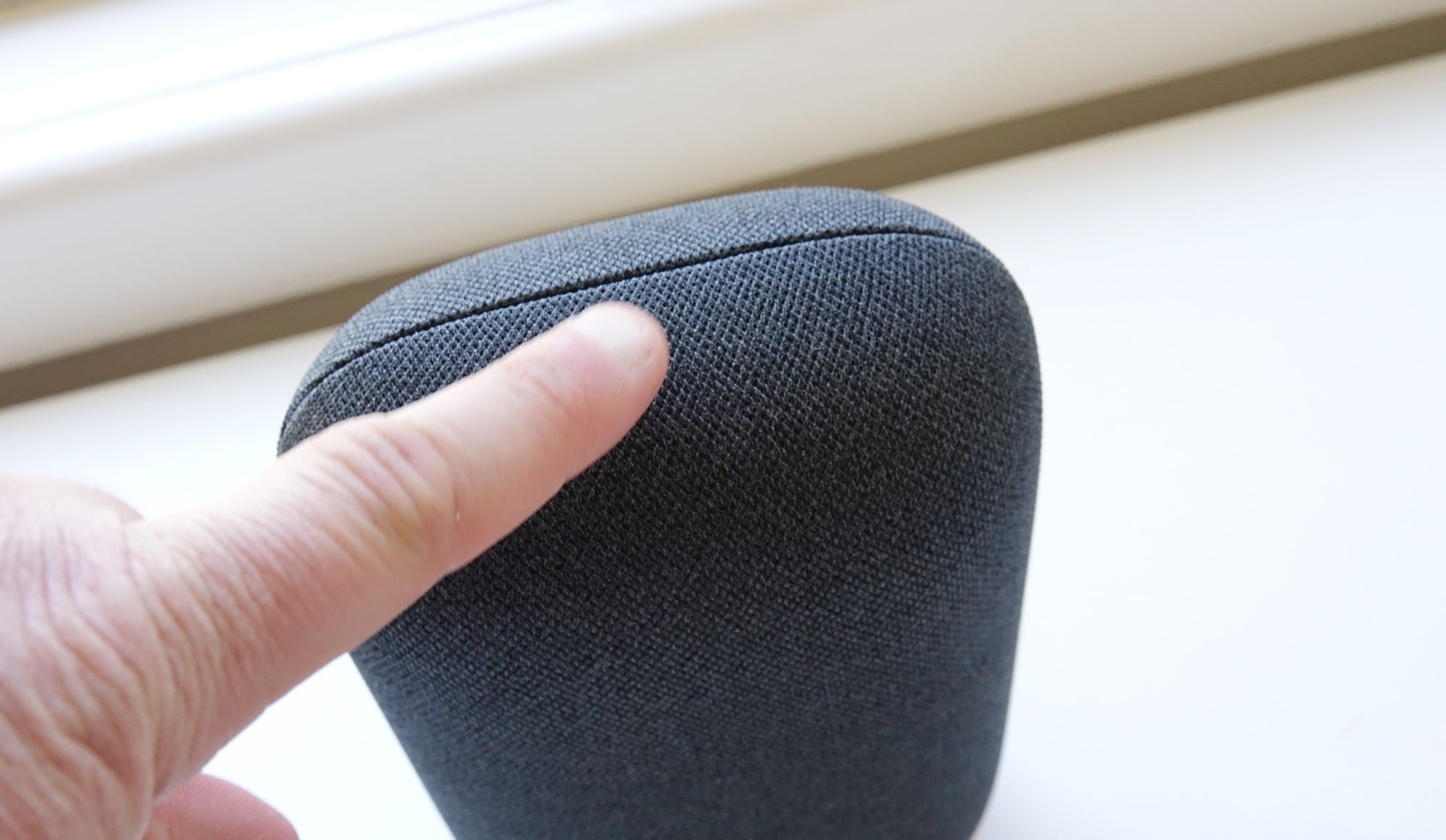 You can even trigger playlists from your voice:

That’s about the best kind of segue to get stuck into performance, which we’re testing using the Pickr 2019 sound test you can listen to and with for yourself, available on YouTube Music and Spotify — which the Nest Audio supports — as well as Apple Music, which it does not.

However, that means our test starts with electronic and Tycho, which sees some punch in the bottom end, but misses out on some of the deep bass. “Glider” for instance has a deep bass hit that sets the pace for the track, and the Google Nest Audio loses it completely. You can hear all the other sounds, and there’s still a light punch to the percussion, but strong bass isn’t a part of what’s here.

The focus is clearly on the mids and highs, evident as we push into Daft Punk’s “Contact”, which offers some crystal clear sounds delivering a surprisingly large soundstage for the space the speaker sits. We scraped back a little bass in the test tracks from Carly Rae Jepsen and Ariana Grande, delivering a light punch in the bottom end, though strong and punchy bass clearly isn’t the Nest Audio’s strength.

Volume, clarity, and a wide soundstage are, however, and with the speaker sitting in a hallway, we found the sound travelled, delivering capable sound, provided you didn’t drive the volume too high. Push beyond 80 percent, and the speakers feel like they hit their maximum, getting shallow fast. 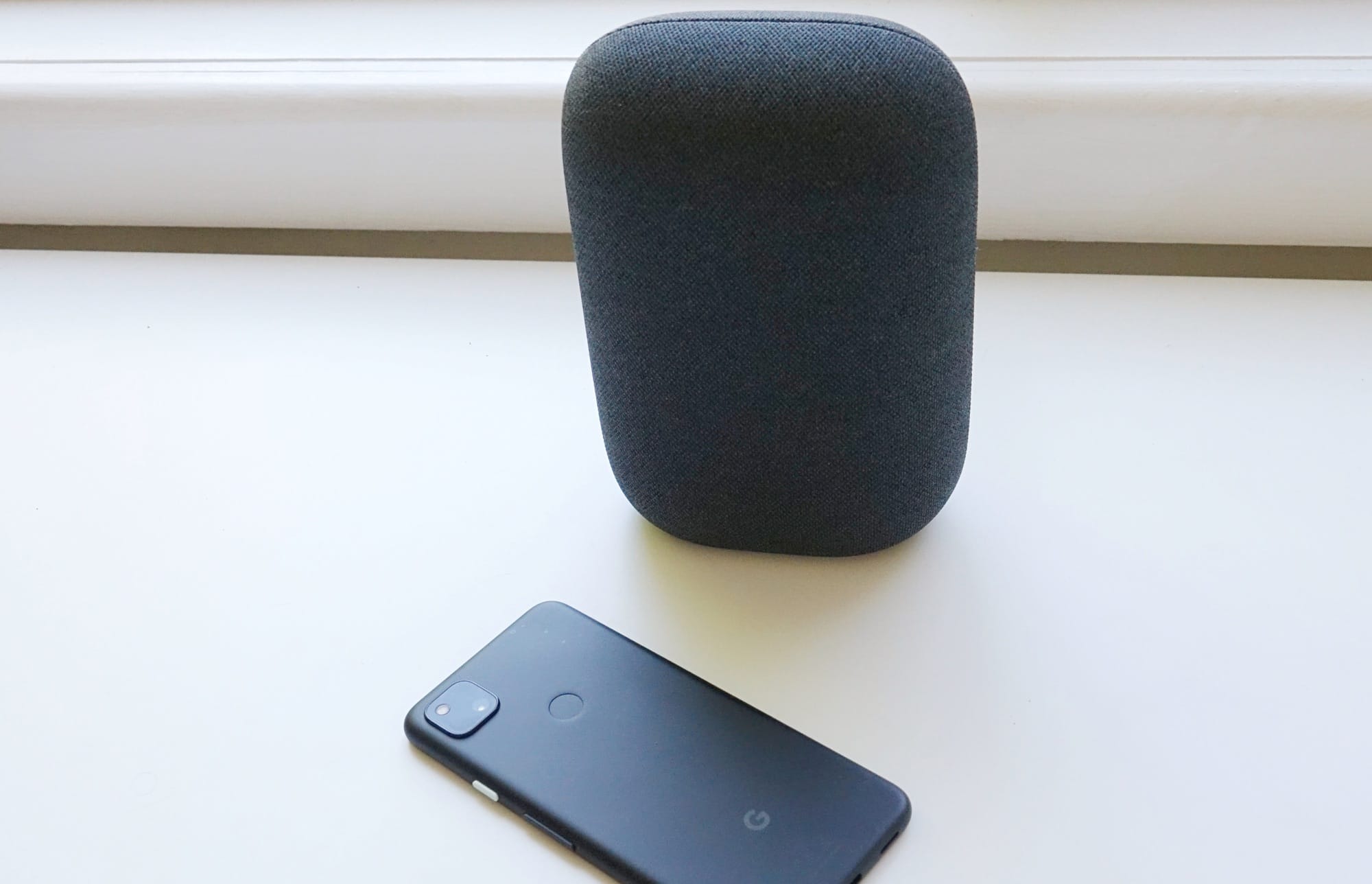 So we kept the volume around 60-70 percent, which is where things feel somewhat matched. Highs and mids are clearly on display in the Nest Audio, with a brighter sound evident in Mark Ronson’s “Uptown Funk” and Maroon 5’s “Animals”, which lack the drive to punch their beats hard, coming off a touch empty against what’s otherwise a decent soundstage.

It’s a similar result in rock, with Muse’s “Madness” hitting the bass thumps in the drums a little more nicely than in other tracks, with much the same in Rage’s “Take the Power Back”, though neither really has the drive found in warmer speakers. Even Paul Simon comes off a little flat, because while the attention is on the highs and mids, the resounding bass snaps feel like they need something more.

Classical handles a little better, but again, the lack of a rich and resounding bottom end means concertos can come out sounding as though the sound guy didn’t know what we was doing at the time. Jazz, on the other hand, delivers the sound quite clearly, even if the double bass misses out on the impact as it reverberates in your ear. Interestingly, out of all the music in our sound test, the two instrument duo between Christian McBride and Regina Carter of “Fat Bach and Greens” delivered one of the nicer renditions, showcasing the surprisingly solid stage on offer from this speaker.

And granted, while the bottom end could definitely have more to it, there’s something quite nice about how this speaker performs, especially in select styles. 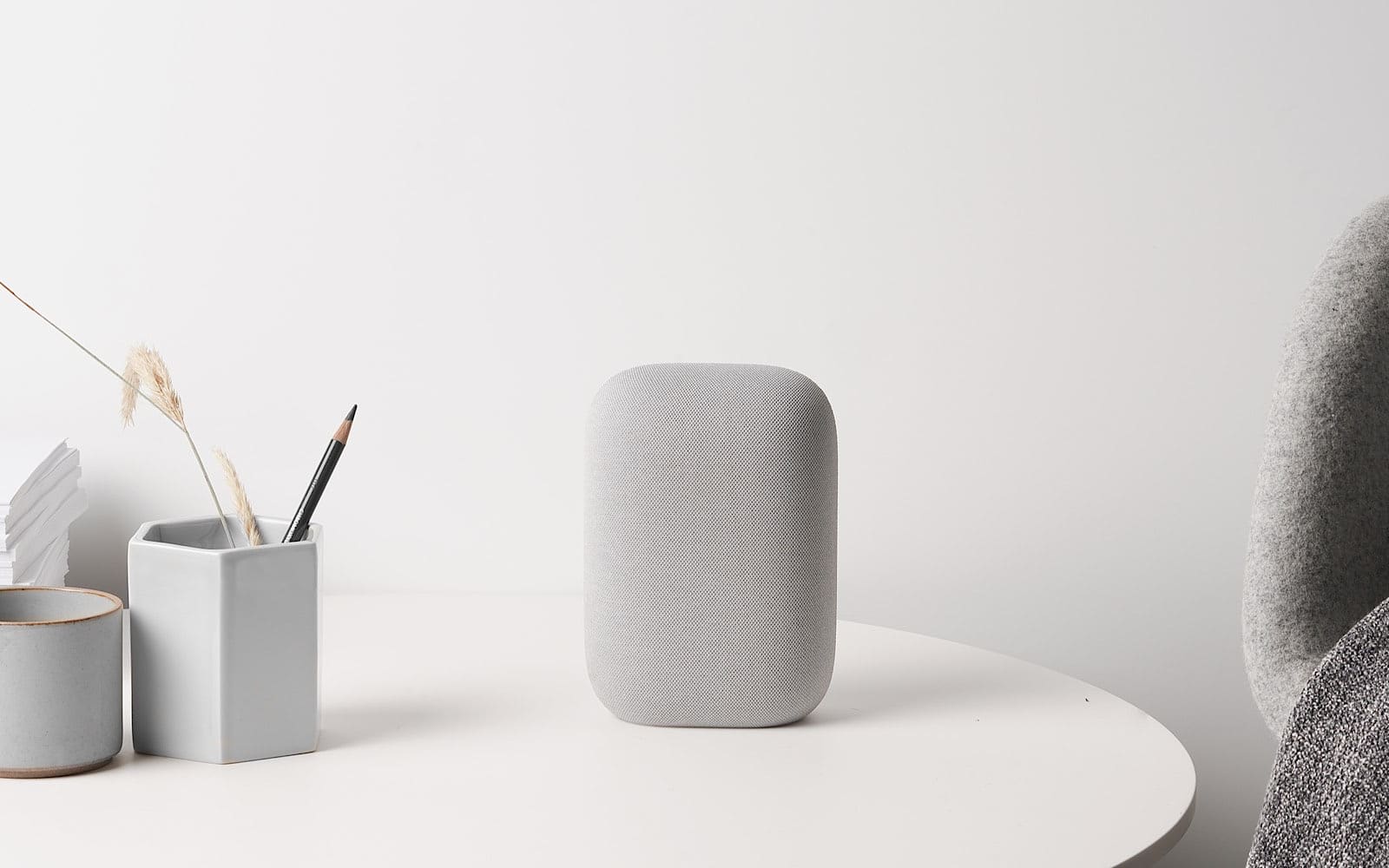 But at $149, it’s hard to argue with the overall sound and value driven by the Nest Audio. While it doesn’t quite match the Google Home Max — really, there’s no possible way it could — for just under $150, Google’s latest speaker delivers plenty of sound, and those smarts we crave in modern speakers.

While the bass is clearly something we want more of, and makes us yearn for the sort of performance the Sonos One is capable of, Google’s Nest Audio is a capable speaker, to be sure.

There are things we want beyond better bass, though, such as a battery. It might seem crazy to ask for a $149 speaker to have a battery, but in this day and age, a speaker you can take around with you that does a little more than just sit there would be nice.

Even more useful would have been a degree of humidity resistance, which is missing in action. No resistance of any kind to liquid — be it direct or gathered by hot air — means you won’t want to leave the Nest Audio in your bathroom or outside. We’re not shocked by the latter — a $149 speaker was unlikely to be water-proofed — but we’d have loved some humidity proofing, which would have meant the Nest Audio could sit comfortably in the bathroom.

While it’s not necessarily as warm as other speakers in the market, the Google Nest Audio delivers a lot of sound for what you pay, making it a solid deal. This speaker is loud and proud, almost unabashedly so. It’s bright and dynamic, and ready to handle most of what you throw at it with all the spirit of a teen that’s been let off their leash.

The bass clearly needs more oomph, especially in comparison to other similarly sized speakers, such as the $299 Sonos One, which isn’t far from the size of Google’s Nest Audio. But at half the price, Google has built a very impressive little speaker that will make sense for many, particularly folks who aren’t sure what they want in a smart home, and might just want to dabble.

It might just be one of the best starter smart home speakers out there. Recommended. 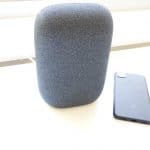 Google Nest Audio
Design
Features
Performance
Ease of use
Value
The good
Bright and loud
Cute design
Looks less like a speaker
Microphones pick up on commands quite well
Great value
The not-so-good
Bass needs work
No battery and needs to be plugged in
Isn't necessarily easy to link up to the rest of your smart speakers
4.2