Any day appears to be a good day for the JB HiFi prize scam to rear its head, and if you get an SMS from JBHiFi, you shouldn’t click the link.

Scams seem to be something of a regularity lately, especially for Australians, and they’re definitely having an affect.

If anything, they appear to have stepped it up just a bit. In fact, this week we’ve seen another common scam rear its ugly head again, as the JB HiFi SMS scam returns once more.

The JB HiFi scam isn’t a scam from the retailer JB. Rather, it’s a scammer pretending to be the national electronic and media store, tempting anyone with a phone with the promise of a free phone or other gadget — a gift, essentially — simply by filling out a survey.

Of course, there’s no gift and no prize, and if you follow the directions, you’ll end up losing out, potentially handling your credit card details to scammers that will end up taking out more than the tiny shipping price they promised for your “free” gift.

So what’s going on in this scam, and what are the signs you should be looking for?

Read the web address in the message 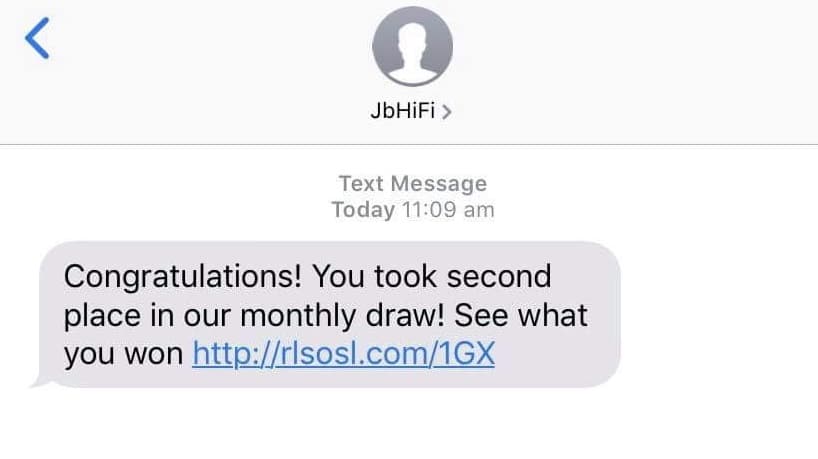 The first thing you need to check out is the web address link in the message. That’s the www dot whatever, or in this case, the http whatever.

Scammers don’t have access to jbhifi.com.au, so they use a short link generator, a system that shrinks their scam website address to something much shorter. In this message, it’s rslosl.com.

Never mind the fact that JB HiFi isn’t likely to send you an SMS, if it did, it wouldn’t use a web address so obscure as that. Nope.

If you do end up clicking on the link in the SMS, you’ll find yourself at a pay that purports to be JB HiFi. Except it’s not. Not at all.

The JB HiFi SMS scams are all pretty typical in what they do, and most of these scammers don’t actually pay attention to the details, so you definitely should. 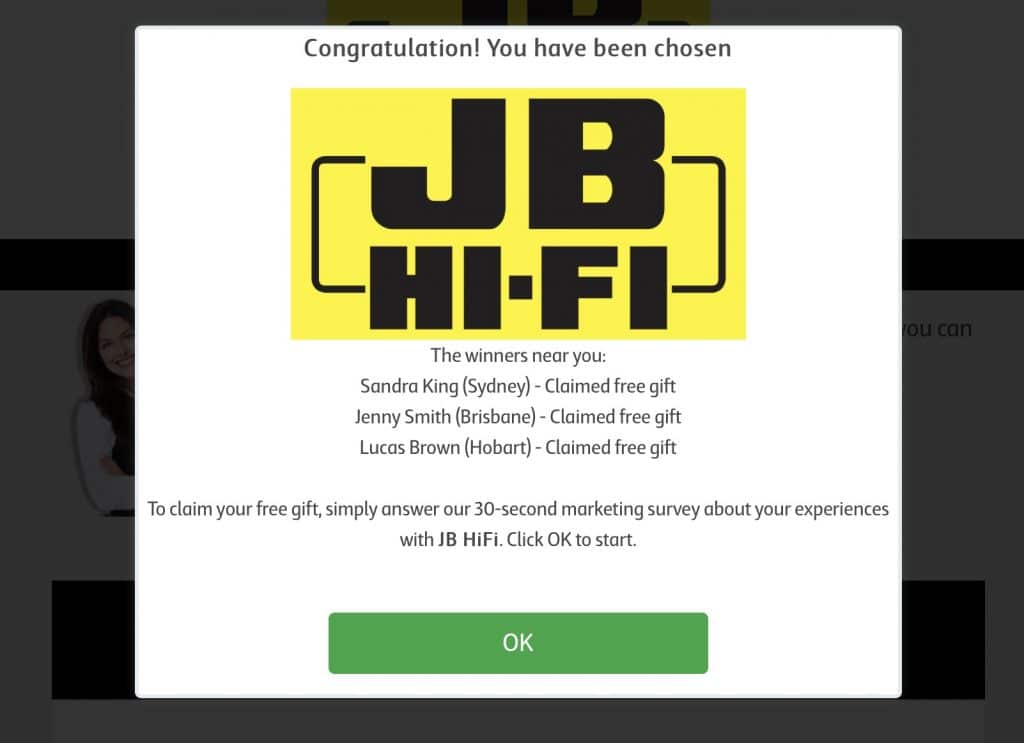 These details include bad grammar and spelling, as well as poorly designed graphics. Take the opening box, which says “Congratulation! You have been chosen”. It might seem small, but we don’t say “congratulation”; we say “congratulations”, and JB HiFi knows that. A scammers from a different country? Less so.

The placement of the iconic yellow and black JB HiFi logo on white text is another giveaway. JB’s colour scheme is yellow and black. You know that when you walk into a JB store, and if you head to the official JB HiFi webpage. Placing a logo so obviously on a white page looks clearly like it would be out of JB’s brand guidelines, so there’s no way this is official.

If you click the “OK” button, the scam actually says at the bottom that the “website is not affiliated with or endorsed by JB HiFi”. It’s not likely that would ever protect the scammer from a lawsuit, but it should be a dead giveaway to you that this isn’t JB HiFi at all.

Check the web address in your browser bar

The most obvious sign is one you should always check, and one scammers can’t fake.

In the browser bar where the website address goes, you might expect to be at JB HiFi, but where you’re actually at is something way, way different.

For this JB HiFi SMS scam, it’s lander.giveaways-online.com, a website that has nothing in common with JB HiFi, and even has a bunch of codes after it to help inform the scammer about you.

You should always pay attention to the address here, and if it doesn’t seem right, close that window down immediately. This is true of pretty much any and every scam.

Always remember that scammers can’t use the official web address of a company, and so they have to come up with creative alternatives. They might buy something similar, or they might not care.

As a whole, scammers know that most people don’t know what to look for, and so may not bother to hide or disguise the look of their obviously fake website.

We’re seeing more bank scams with similar names, so it’s clear some scammers are getting a little smarter, making it more difficult for everyone. However that doesn’t apply to all.

But it says it’s secure!

One point that tries to push the belief home that it’s real is the security lock, plus the secure connection image at the bottom of the page.

Security certificates can cost money and they can be free, but they don’t guarantee the site is real. They just mean the information that you’ll transmit in your web browser will be secure.

Don’t look at the lock and think it’s an authentic website. It’s just a bit of security that most websites need. 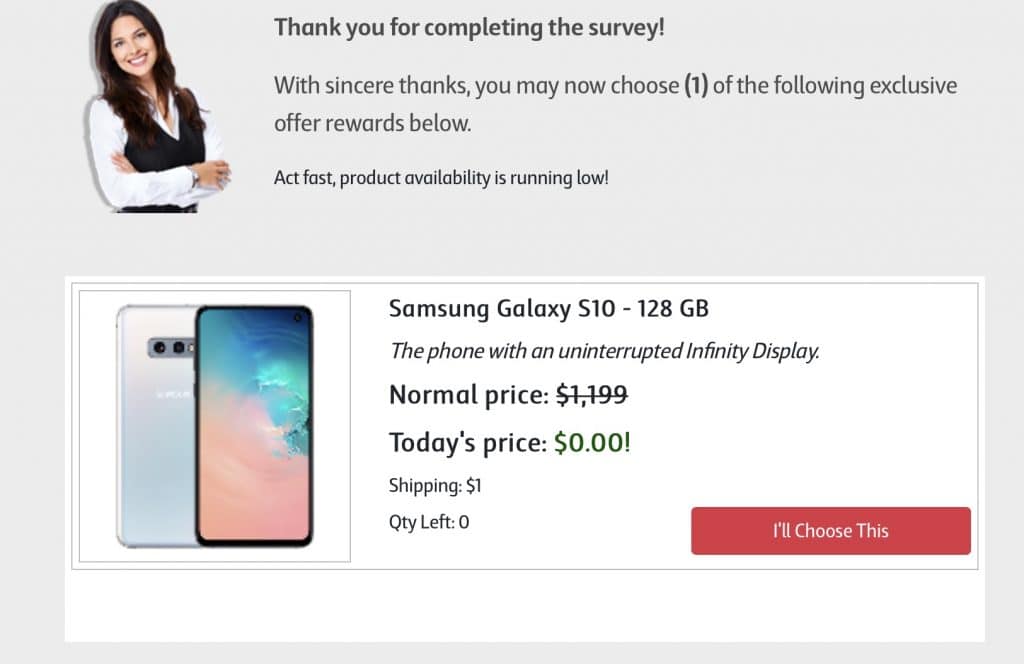 Let’s say you ignore all of the things we’ve suggested and continue on with the scam.

If you answer all of the rather irrelevant questions about your JB HiFi experiences, if you follow the buttons and believe what you see, the scammers will eventually promise a gift that has a remarkable saving, generally of a good thousand bucks or so.

Sound too good to be true? It is.

Nope. Throw your email in and you’ll just start down a funnel of scams, and open yourself up to even more. The image and website is fairly easy to fake, and at one point, you’ll be asked for your credit card details to get that “free” phone out with the one dollar shipping.

If you’ve already guessed you won’t be charged a buck to get a phone, and that scammers will likely take you for a whole lot more, you’ve caught the scam.

The problem with scams advertising a free gift or a prize is that they’re incredibly common. Sadly, people believe them all too easily.

It’s very easy to want to believe you’ve won something, and that a free gift is possible, but it’s better to pay attention to the warning signs.

Australians lost almost half a billion dollars to scams last year, and this year, the number will likely increase. Scammers make big money off everyone, and the number of scams are increasing.

For the JB HiFi SMS scams, know that JB won’t send you a message like this, and that merely shopping at SMS won’t likely enter you into a prize draw of any kind. These scams won’t go away, either, and will only increase in frequency, so the more you remember and pay attention to, the less likely you’ll be caught later on down the track.