Not sure if you want a monitor or a TV, or if you’re after something that fits the bill of both? Samsung is updating the screen choices in its Smart Monitor range to kill two birds with one stone.

If you’re sitting at a desk and trying to work out whether a TV might be a good option, it can seem ridiculously easy to pick a big screen given the big resolutions TVs now reach.

We’re not sure how close you’re sitting, but a max of 43 inches is probably big enough for most desks, though monitors made for those sizes tend to cost more than the pretty penny they cost for TVs, making the choice difficult. Throw in a difference of features, and picking between a TV and a proper monitor to work on can get mighty complex.

Size-wise, it usually comes down to this logic: the bigger the screen, the further you’ll need to sit back, an approach that obviously plays a bit of a problem at a desk.

And yet TVs can be properly compelling, because you can find 4K pretty easily in TVs, but finding it in monitors is less of a thing, especially at a compelling price point. That’s before you delve into features, because if you want to use that monitor as a secondary TV, you might not have the features built in, forcing you to bring along something like a Chromecast to get that screen to do all those things.

TV smarts typically aren’t built into most monitors. Rather, desk monitors have an input or two, and that’s largely it. Monitors are very much a BYO state of affairs. 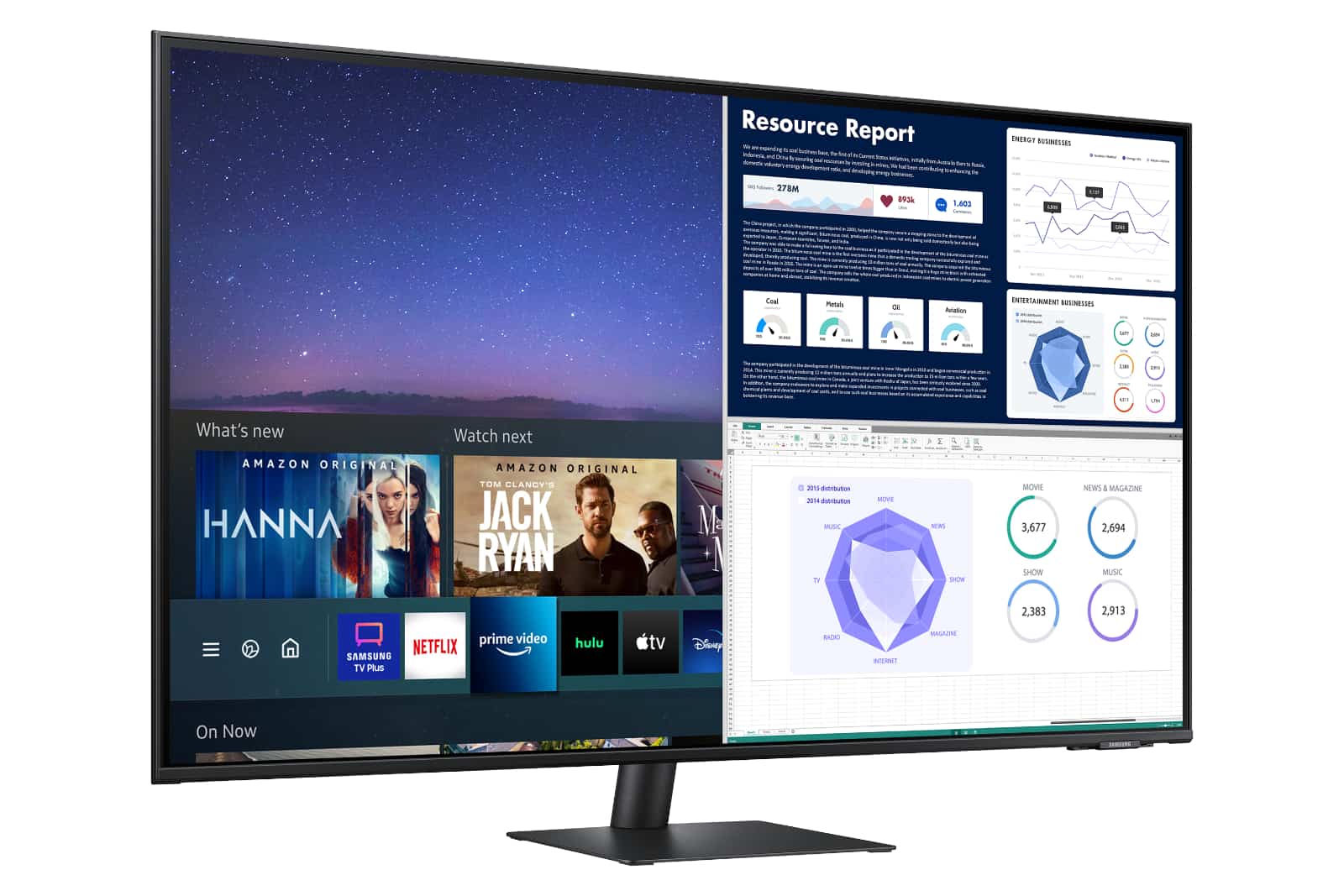 It’s something Samsung talked up earlier in the year when it launched a monitor that featured a similar operating system to what’s seen on its TVs, capable of delivering apps to let you watch movies, but also let you use the screen like a PC, courtesy of an evolution of Samsung’s desktop conversion technology “DeX”, which started life as a phone-to-desktop piece of hardware, and is now the sort of software add-on thrown into its tablets, too.

This year, Samsung is upping that range, offering more choices in its “M” Smart Monitor models, with a Full HD capable 24 inch joining the already launched 27- and 32-inch models, while folks keen for a bigger screen set to a more spacious 4K resolution can find it in the 4K 43 inch M7.

While the sizes and resolutions vary across the range, they all feature AirPlay 2 to let Macs and other devices send a screen wirelessly, and they can all run Microsoft 365 documents and Samsung’s DeX desktop operating system directly from the screen if they have a compatible mobile phone, meaning no PC is required. At the back of each screen, there’s a Type C port and a couple of standard USB ports, as well as Bluetooth and WiFi, allowing the screen to talk to the phone, as well as a keyboard and mouse.

“As time spent working, learning and playing from home increases for people around the world, homes are being transformed into multi-functional environments,” said Phil Gaut, Director of Display and Memory Solutions for Samsung Australia.

“Our expanded Smart Monitor lineup will continue to provide users with even more convenient and flexible ways to accomplish everyday activities through technology, enabling them to truly ‘do it all’ through powerful mobile and PC connectivity on the smartest monitor available on the market today,” he said. 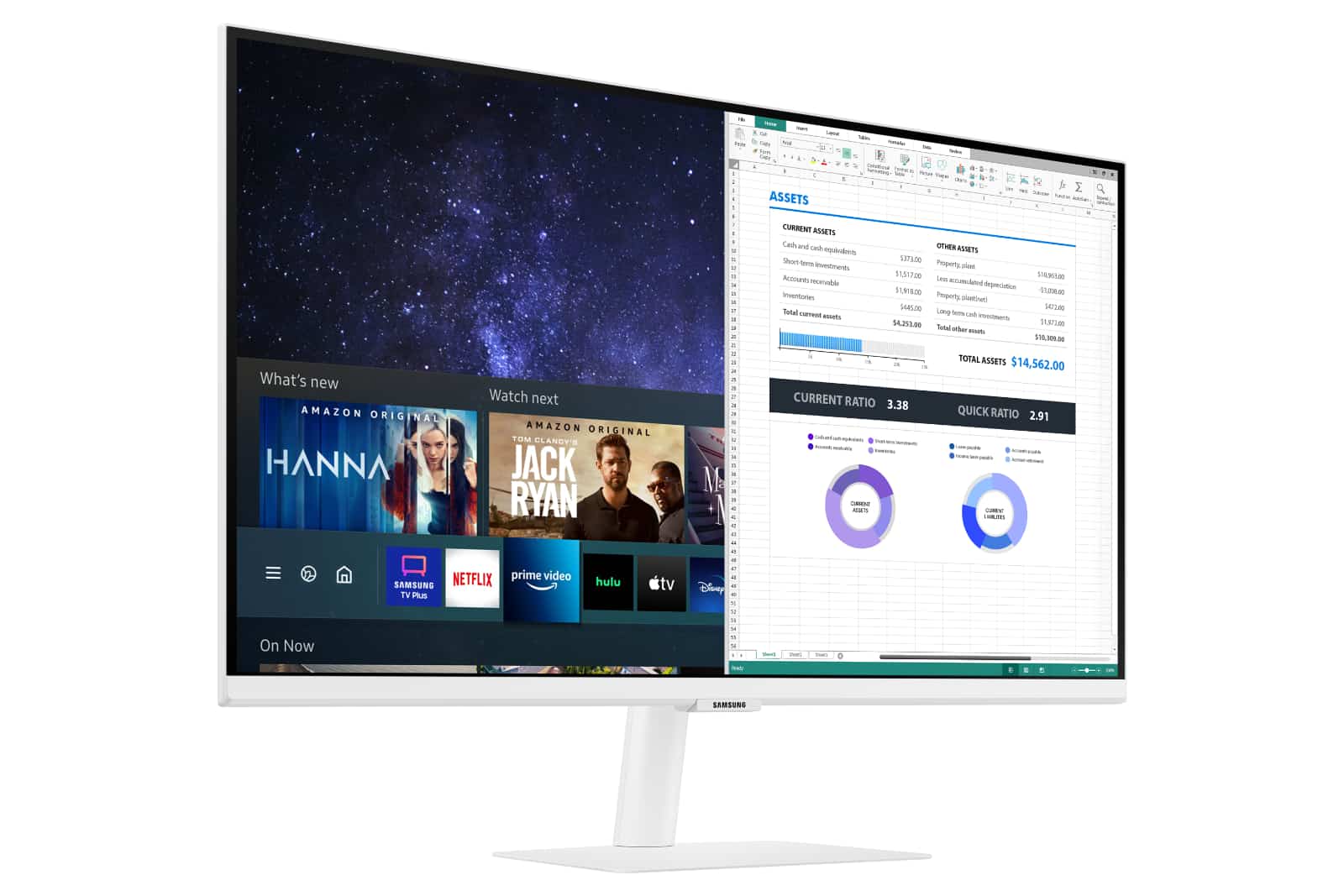