You may not realise it, but the paint and varnish finishes in your home are hiding a chemical. And the latest Dyson fan can get rid of it.

If you’ve been to a department or electronic store in the past decade, there’s a good chance you’ve seen how Dyson reinvented the fan. Much like how it changed the way vacuums were made or even the way hand-dryers were designed, the blade-less Dyson Air Multipliers — the “AM” model fans — are very much a gadget that clearly reads as “Dyson” loudly and proudly. No one else does a fan quite like Dyson.

The technology — which sucks in air from the bottom where the holes are, speeds it up through a motor inside, and then expels it from the slots in the actual fan shape itself — has become one of those things that is recognisable as a Dyson and only as a Dyson. But did you know it can do more than blow air a little faster?

Some Dyson fans can purify the air

While there are some Dyson AM models that work as a heater for when it’s cold, others again filter the air, as that’s becoming something of a standard alongside how the fan works.

Much like the HEPA filters you can find in Dyson’s vacuums, the company has previously released fans that work to purify and filter the air, something that uses a combination of technologies — including a carbon filter and a HEPA filter — to remove pollen, mould, and chemicals you can’t detect from the air, and even the ones you can.

For instance, during the late-2019 and early-2020 Australian bushfires, the smoke and particles found in the air were the exact sort of thing purifiers were built to deal with, cleansing the air of larger particles sized between 2.5 and 10 microns, smaller than you can see, but big enough for an air purifier to work with.

But they’re not the only things you might want to filter out. 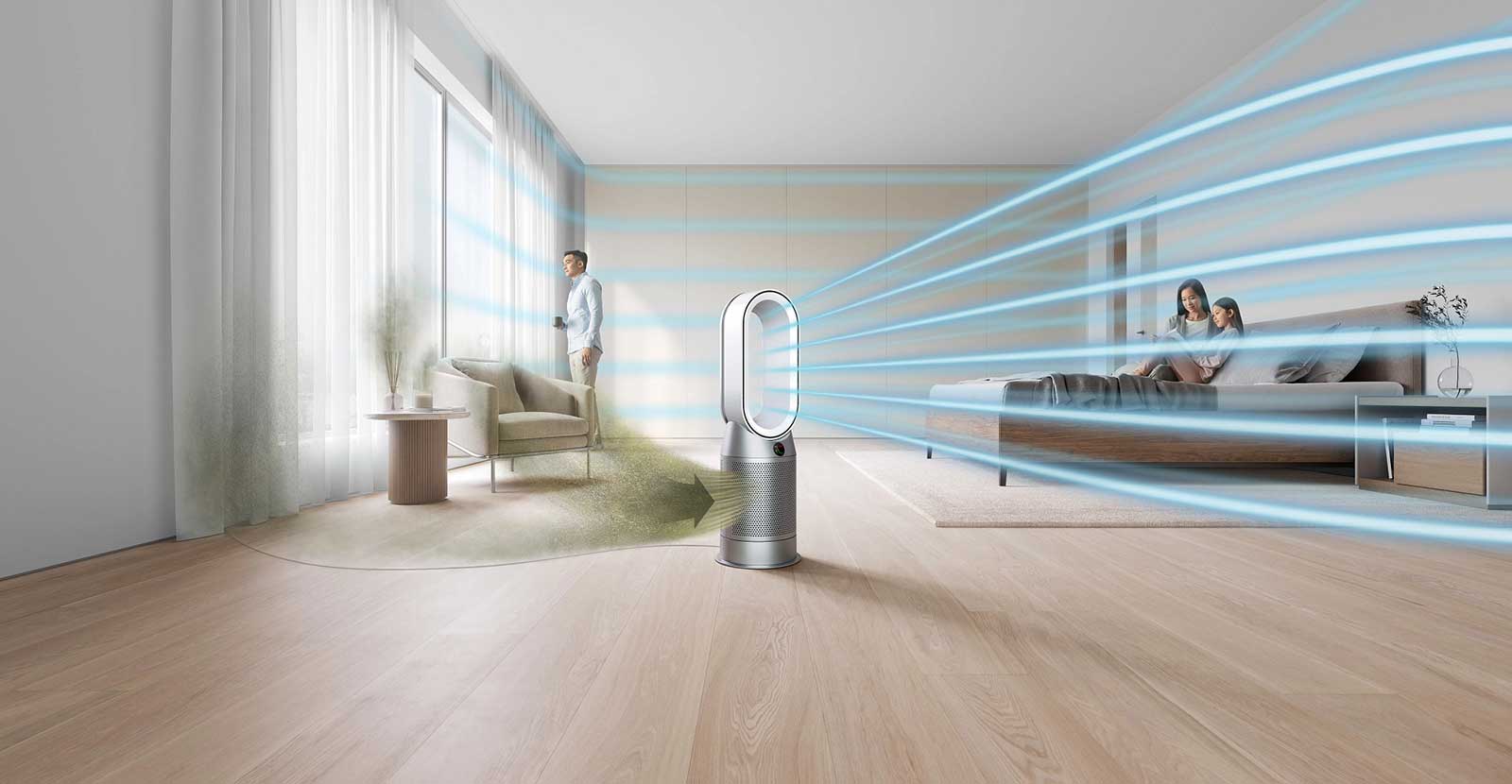 The difference in particles

While Dyson’s previous Pure AM models have focused on PM2.5 and PM10 — “particulate matter” measuring 2.5 microns and up to 10 microns — as well as what cars release, nitrogen dioxide, and the volatile organic compounds (VOC) found in materials in the home, there are other substances to watch out for, as well. One of which you probably won’t see coming.

Formaldehyde. It’s the stuff that is typically used as a way of preserving things in a science lab, but it can also be released in the home without you realising it, typically in products that have used formaldehyde-based resigns, such as plywood and fibreboard, and then in household cleaning products and paint, wallpaper, and varnishes. And it’s a chemical that can be less than fantastic for some people to inhale, particularly due to long-term exposure, something called “off-gassing”.

Also called “outgassing”, it essentially means breathing in chemical gas in a vapour form, which can be harmful to your health, and is found particularly after renovations. It means you might be breathing in the stuff that isn’t great for you, and not just immediately after the renovation, but long term.

However, formaldehyde is also hard to filter, because it’s just so small. Measuring 0.1 microns, formaldehyde is technically rated at PM0.1, making it much smaller than what the PM2.5 and PM10 purifiers can work with.

Cleaning the air from formaldehyde Dyson has been working on a solution for this with the latest fan, developing a special type of sensor (above) that can work to pick up on formaldehyde levels, as well as a special type of filter that never has to be replaced. It’s called a “Selective Catalytic Oxidisation” filter, which works as a catalytic filter to break down formaldehyde at a molecular level as it travels through that, collapsing it into water and CO2 without you realising it, and then regenerating the filter component from oxygen found in the air.

It’s being used on the inside of the Dyson HEPA Cool Formaldehyde for cooling and the Dyson Purifier Hot+Cool Formaldehyde, two models specifically designed to capture and break down formaldehyde particles, as well as the other nasties found in PM2.5 and PM10, including VOC, NO2, mould, smoke, and so on. By using three layers of filtration, Dyson is working to cleaning the air more clearly at home.

“The off-gassing tendency of formaldehyde means that it can go undetected in a home for years,” said Alex Knox, Vice President of Environmental Care at Dyson.

“Dyson has engineered a machine that provides accurate and successful sensing, capture and destruction of the pollutant. Our solid-state sensor doesn’t dry out overtime, lasting the lifetime of the machine,” he said.

“The COVID-19 pandemic has raised global awareness about the air that we breathe and Dyson’s commitment to providing cleaner air through innovation and technology remains at the forefront of our mission.”

“We know that our technology is capable of capturing some viruses,” said James Shale, Engineer at Dyson.

“It’s just you need to substantiate each claim you make on a product. It’s very difficult to test on stuff that’s that harmful. I think we haven’t proved any claims on viruses,” he said.

While filtering viruses remain something the company will likely keep working on, for now the focus is on the stuff that you have inside your home and may not realise, with this technology able to clean the air and tell you about it remotely, using the Dyson app to do so.

And it’s coming in two models to Australia in May, with the cooling only Dyson HEPA Cool Formaldehyde launching for $799, while the Dyson Purifier Hot+Cool Formaldehyde sees launch in May for $999.

They’ll arrive alongside slightly updated Dyson Purifier Cool and Hot+Cool models, both of which filter the air using carbon and HEPA filters, but without the formaldehyde technology, available for $799 and $899 respectively.