Product manufacturers make some lofty calls: this will change your life, and the way you do things henceforth. But with Samsung’s Dex phone-to-PC concept, the company might have something worth investing in.

If you’ve seen an advertisement or owned a piece of technology made in the past 100 years, there’s a very good chance you’ve been marketed to, and possibly with some jargon or spiel the product had no chance in achieving.

Some manufacturers will tout life changing properties for their gadgets because there are really only so many ways to convince someone to plonk down the cash and spend, spend, spend.

Most of us are fortunate enough to know when to call a spade a spade, and when to point out when we’re obviously being told a porky, because the reality is there’s only going to be so much a product can actually do, and expecting it to match every marketing piece isn’t just foolish, its playing into the hands of the people who want you to spend your hard earned cash.

When reality kicks in, what we actually want is a product that not only does what it says on the box, but does so in a way that makes us feel like we’re getting what we paid for.

There are loads of concepts that have never really nailed either of those things, but one that truly sticks out for us is the idea that your phone could take over from your computer and serve double time as a laptop or desktop. Smartphones are already making inroads into the tablet world, we’ll grant that one, but in terms of becoming a part of your desktop working environment, that’s a concept that has never properly been pulled off, and not for want of trying.

Back in 2011, Motorola tried to make the smartphone the middle-ground between a laptop working environment with its Atrix and lapdock, the former being a smartphone while the latter was a special laptop with a connection for your phone. The idea with this was that you would store all your critical files on your phone and the moment you wanted to properly work on them, you would dock the phone into the special Lapdock laptop, and it would turn your phone into a laptop.

Asus tried something similar in its “Padfone” concept, a tablet that could incorporate a smartphone and use the files from the phone in the tablet — because the phone was basically the brain for the tablet — but it never really panned out as a great product.

In fact, neither of them did, and the whole concept of using a phone as a computer middle-ground was mostly forgotten about until Microsoft revived the idea with “Continuum”.

Built for Windows 10, Continuum posed the idea that Microsoft’s Windows Phone platform could run a full version of Windows 10 instead of a cut-down phone specific copy, and when docked with a Continuum dock, you would have a fully fledged Windows 10 computer.

Except it too never really worked the way Microsoft claimed, and wasn’t helped by a severe lack of apps and a platform that has felt like it’s been dying for so long, we wonder why Microsoft hasn’t just said “kill it” already.

You can see from this spotted history that turning your phone into a laptop or desktop has never really been properly realised, but that could change this year with Samsung DeX. 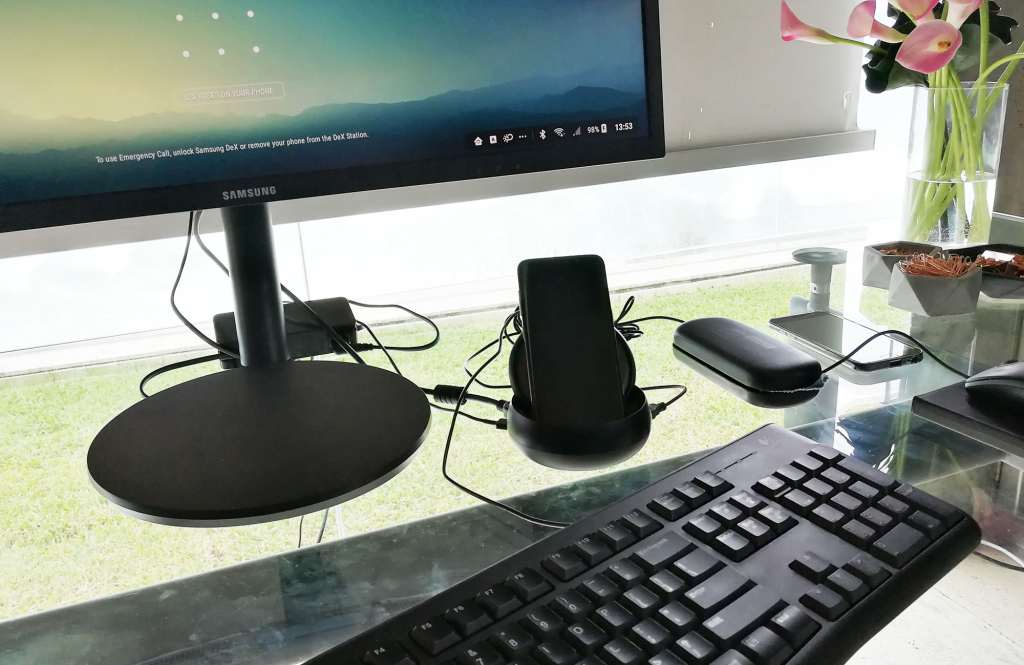 The idea with DeX is that once again your phone can do double duty as the brain for a computer environment, with Samsung’s Galaxy S8 and S8+ being those brains.

The phones will both come with support for the external and optional Samsung DeX base station, which is basically a dock for a 2017 Samsung Galaxy flagship sporting a USB Type C port and some neato connections on the back, namely ones for HDMI (display) and USB (keyboard and mouse).

And the premise is largely the same, too, because once you dock the phone with DeX, Samsung loads up a shell of an operating system that will let you not only access your files, but edit them, too.

There’s only one difference: compared to the concepts we’ve seen in the past, Samsung looks like it has actually pulled it off, achieving what everyone else has failed at previously.

No one is more surprised than us, which mostly expected the concept to be a bit of a wash, but in the demonstrations experienced this week giving journalists a hands-on with the Galaxy S8 and S8+, we were treated to a premise that plays out much like it has been advertised, with the phone really turning into a computer. 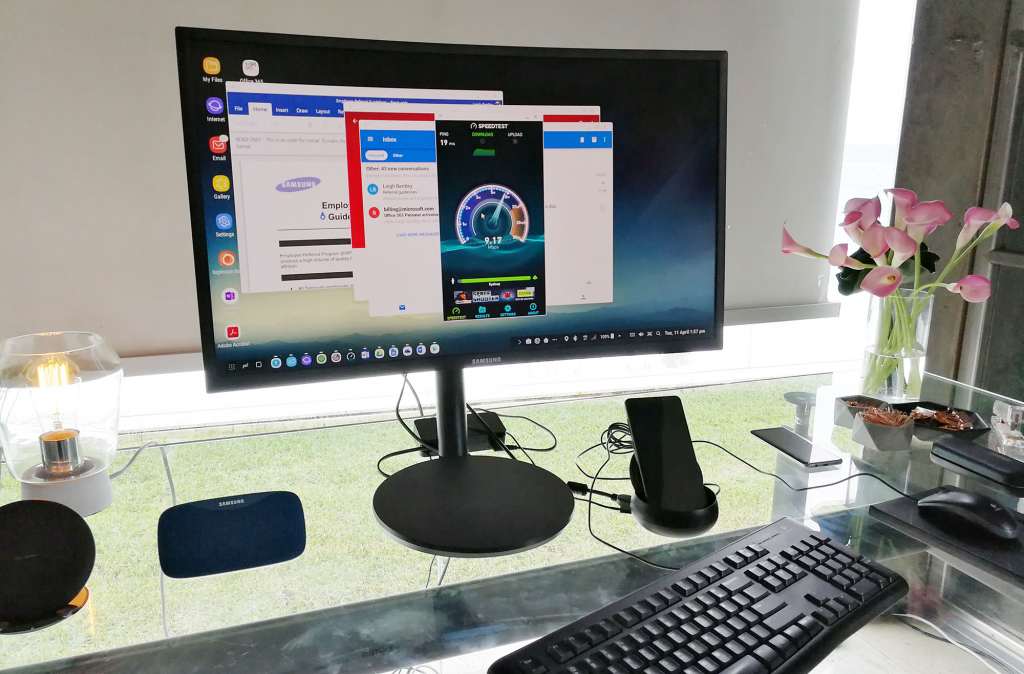 You get Android, sure, and you get all your apps the way you would normally see them, allowing your phone-desktop to play the apps and games the way you would if they were on your phone, except through a monitor. But you also get to see it almost like you’re using it through the weird hybrid of Mac, Windows, and Linux, and some of these apps will even be made to make the most of the DeX setup.

Microsoft and Samsung have been working together to make Word, Outlook, and other Office apps work properly in the DeX desktop environment, while Adobe is also a partner, too. And if you use Citrix or VMware, apparently these will be supported, providing emulation of other environments if you need them desperately.

You can even do all of the things your phone would normally let you do, using the phone’s camera for video conferencing but viewing it on a monitor instead. You can answer messages with a keyboard, type in those emails in a better and more elongated display window — because you’ll have a screen, of course — and generally use your phone as if it were a computer, because we all know that technically it is, but DeX will really help make it feel like one.

But perhaps the one thing that makes us happy is that finally a manufacturer has worked out that a mobile-to-desktop environment is more than just making the mobile work on the big screen, but rather a comfortable transition, which DeX appears to be.

For us, it’s early days, and while we don’t know if Samsung’s DeX can kill or replace the desktop, it certainly has more going for it than any other mobile replacement-computer hybrid we’ve seen prior.

Helping it is the price, because with the DeX unit adding $199 to the regular $1199 or $1349 costs of either a Galaxy S8 or S8+ (respectively and outright, because on-plan works out to very different pricing), if you’re at all keen to see whether the phone can be your desktop replacement and shrink your workplace luggage down dramatically, at least you won’t have to fork too much out for the privilege. 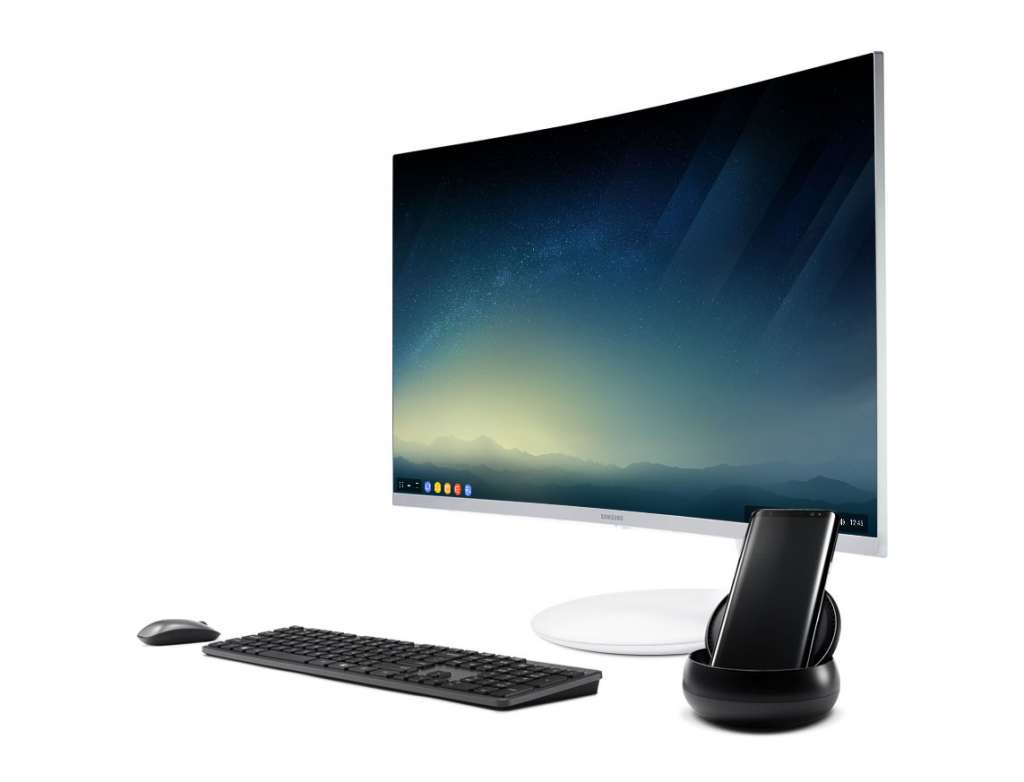