Apple sets a date for the iPhone 8

In a little under two weeks, the next iPhone or three will be unveiled, as Apple chooses a date for when to show the world what it’s been cooking up.

It’s September, and you know what that means: Spring, with the warmth of the outside world making a return and you being able to go out without a jacket. Yay.

September is many things, and will see the release of quite a few products, but on the same day that just so happens to be a very funVideo Games Day and Chocolate Milkshake Day, Apple will be celebrating with something fun of its own: the launch of new iPhones.

Yep, Apple has made the day known, and will be launching the next iPhone models on September 12, with September 13 at 3AM AEST being the time Aussies can hear about it by watching the Apple livestream.

Technically this year would normally constitute what’s known as a “dot release”, or for Apple an “S release”, since its iPhone generation models normally run the span of two years and the half generation refresh models sport the “S” moniker on the name.

But this year is special, thanks in part to the 10th anniversary of the iPhone falling on this year, prompting experts (this guy included) to expect that a newer special edition and more future-focused iPhone will also be unveiled, either under the name of the next-gen model “iPhone 8” or perhaps something a little more futuristic like “iPhone X”.

And there have already been numerous leaks suggesting that something different is, indeed, coming. While the iPhone 7S and 7S Plus will indeed sport improvements, if Apple is announcing a third model on September 12 (September 13 our time), the 8 will be the one to look out for, especially in a year that has seen some excellent improvements in smartphones across the board.

Think of devices like the Samsung Galaxy S8 and LG G6 with their massive practically frame-less screens, or the high-speed Category 16 modems like in the HTC U11 and the Sony Xperia XZ Premium, the latter of which also arrives with the fastest slow-motion camera currently available.

These are all areas that could threaten Apple’s dominance, and Samsung is beginning to erode that with its Galaxy smartphones, something that Apple will seek to quash quickly.

To do that, it will need something impressive and highly premium, and while the iPhone is already a premium product, a next-generation model that screams to the world “we’re still leading” by including these high-end features could just do it.

Normally Apple’s invites suggest features that are coming, a little like a hidden message. With the colours in the Apple logo, we might just be seeing the suggestion of a newer screen, possibly OLED without borders, while the light inside could be a spotlight on something new. It could also imply pulling something into focus, or could just be wishful thinking on our part.

We’ll know soon enough, with the next iPhones set to be unveiled in just under two weeks. Stay tuned. 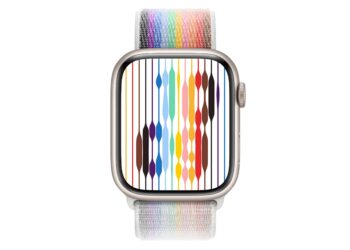