There have been countless video improvements through the years, but the audio in your home movies is about to take a leap, with a view to becoming more three dimensional.

We’ve been told the world of TV has been changing for the past few years, as the world of Ultra HD starts to permeate more living rooms than just those of the rich, so too does the media that can drive it, evident by the fact that you don’t necessarily need a hyper-fast internet connection to get 4K movies and can instead buy it from your local Blu-ray retailer.

Together, these new TVs and their Ultra HD media (as well as an Ultra HD Blu-ray player) will deliver higher quality imagery for movies you buy, which is the point of 4K televisions, but one thing hasn’t change much for the average consumer, and that’s sound.

For over 15 years, the best type of audio the general consumer had to look forward to was what was considered conventional surround sound.

Whether you opted for a 4.1, 5.1, or 7.1 speaker system, the idea was essentially the same, with four, five, or seven speakers sitting around your sitting position, one subwoofer, and audio that travelled around you, much like the positioning of the speakers.

When you went to a movie in the cinemas, it’s likely that you heard the film in this way, listening as activity happened around you, and this has been much the way audio has been for home theatre systems for ages. Ages upon ages, in fact, as it harks back to when the first multi-channel speaker systems turned up before 2000, sold by any and every manufacturer, from the insanely expensive to the remarkably inexpensive you’d be so bold to call it “cheap”.

Fortunately, sound has been changing, it just hasn’t been as relevant to the consumer at home.

Many theatres around the world — and even a few in Australia — support the idea of “3D sound”, which is much less of a gimmick than say the push for 3D movies the world went through a few years ago.

Instead of visuals that pop off the screen for the sake of that feature alone, 3D sound is about placing audio elements around you, so when a bullet sound whooshes by your ear, instead of traveling the distance from one speaker to the other, it actual does so in a 3D environment.

You can’t see the sound-wave making it happen, but audio programming and specially directed speakers firing upwards at your ceiling makes this possible, meaning audio can be everywhere around you, not just the front, back, left, and right.

That’s the idea behind Dolby’s Atmos, one of a few 3D sound platforms available, and one of the first to land itself in consumer friendly home theatre systems. 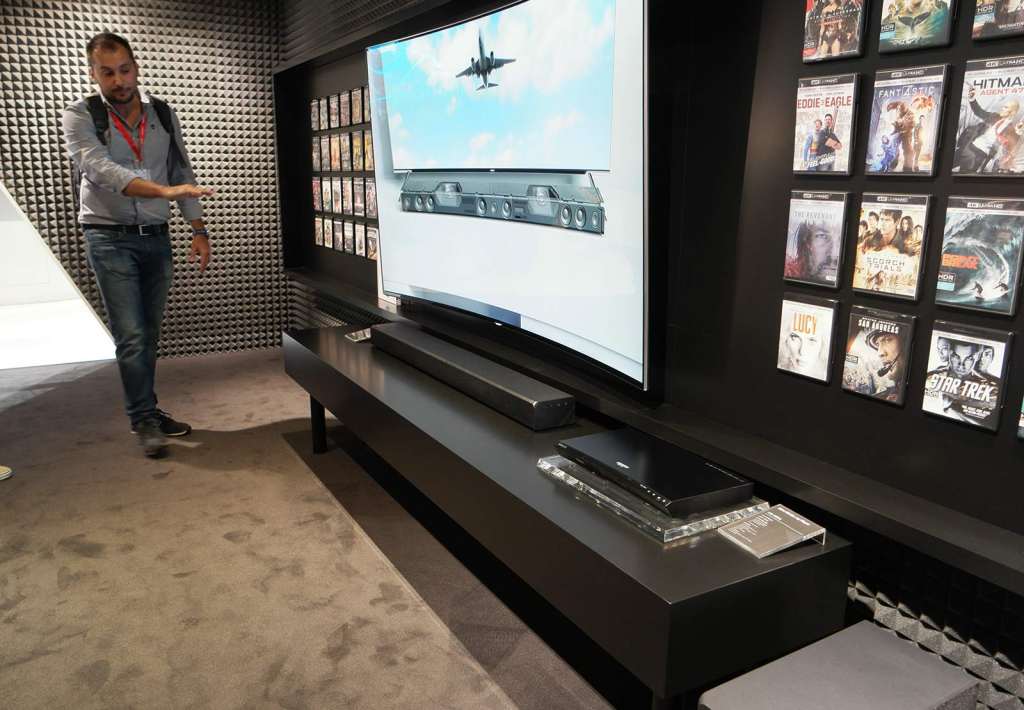 Samsung is one of the first here in the mass consumer space, following on from the combination of home theatre amplifiers and speakers put forth by the likes of Denon, Onkyo, Pioneer, and Marantz over the past few years, but these tended to be massive units requiring a pretty heavy spend on amp and speakers in order to get that 3D sound to enter your living room.

In fact, Samsung’s idea is very reminiscent of the home theatre systems you used to find en masse to accompany TV sets, providing upward firing speakers in a long soundbar delivering left, center, and right channels, while two rear speakers on the left and right also fire sound up.

Interestingly, the speakers aren’t the massive floor standing speakers you might expect them to be, with 15 small speakers all up delivering enough power to make a room shake, as evident from the small test we heard at IFA in Berlin. 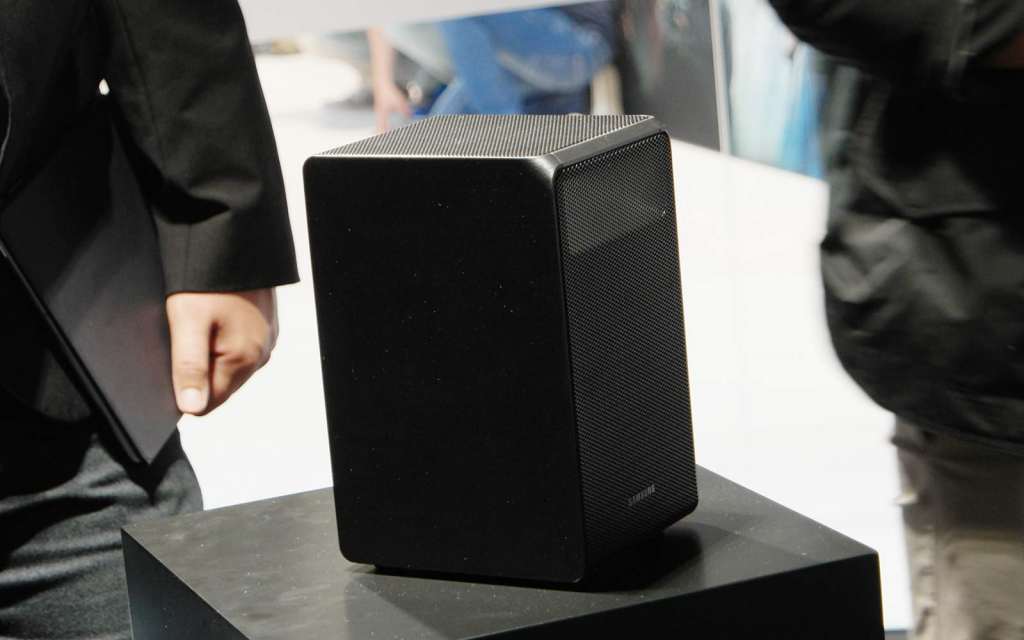 Even in this pint-sized test with an atmospheric demo, it was clear sound in the 3D soundspace was different to its multi-channel sibling, with the chair we sat on sitting in the middle of the on-screen action.

As we said, this isn’t the first time we’ve seen Atmos demonstrated, but it is a first for home consumer systems, with the complexity of Atmos shrunk to a smaller unit, accompanied by a fairly powerful subwoofer.

Officially, the model is called the HW-K950, and while Samsung hasn’t provided pricing for the Australian release, the US pricing of $1299 USD suggests the first Atmos soundbar will not be cheap, approaching pricing of the Dolby Atmos amp and speaker systems locally.

That said, we’re told it will include WiFi and be multi-room compatible, extending support for Samsung’s Sonos competitor from its other multi-room speakers, possibly upscaling music in at least one room in the home so that it sounds like you’re sitting within where the audio has been constructed.