A uniquely Australian smart speaker routine for the family.

If you have a balloon, access to a smart speaker, and someone who loves Bluey, you can play “Keepy Uppy” simply by programming a routine.

We’re a little addicted to easily one of Australia’s best TV shows, Bluey, and we suspect we’re not the only ones.

If you’ve not caught up with Bluey, Bingo, Chilli, and Bandit, they’re an Aussie family in a dog world that is very relatable to kids and parents growing up. Many of the games they play as a family are deeply connected to how kids of today have grown up, many into parents, and the creators have taken care to keep the imagination going throughout the lives of their on-screen creations.

Bluey is a series that’s easy to connect with, and that may offer some inspiration to parents looking for an easy game to play with their family. You might drive over a bridge and shout “not today, Bridge Troll” or encourage the kids to find a way to teach the grand-parentals how to dance.

Or you might just blow up a balloon and play some “Keepy Uppy” for a few minutes, making sure not to let a balloon fall on the ground.

You can play Keepy Uppy with a balloon easily, but if you want to make it extra special, you might want to use the music from the “Keepy Uppy” episode, and that’s something you can trigger from a smart speaker, as well, provided you make a routine to make it happen.

So how do you do that: how do you make a special routine so you can play Keepy Uppy whenever?

Well, you need a smart speaker from either Google or Amazon, and access to a music service. And then just follow the directions, and you’ll be ready to trigger Keepy Uppy whenever. 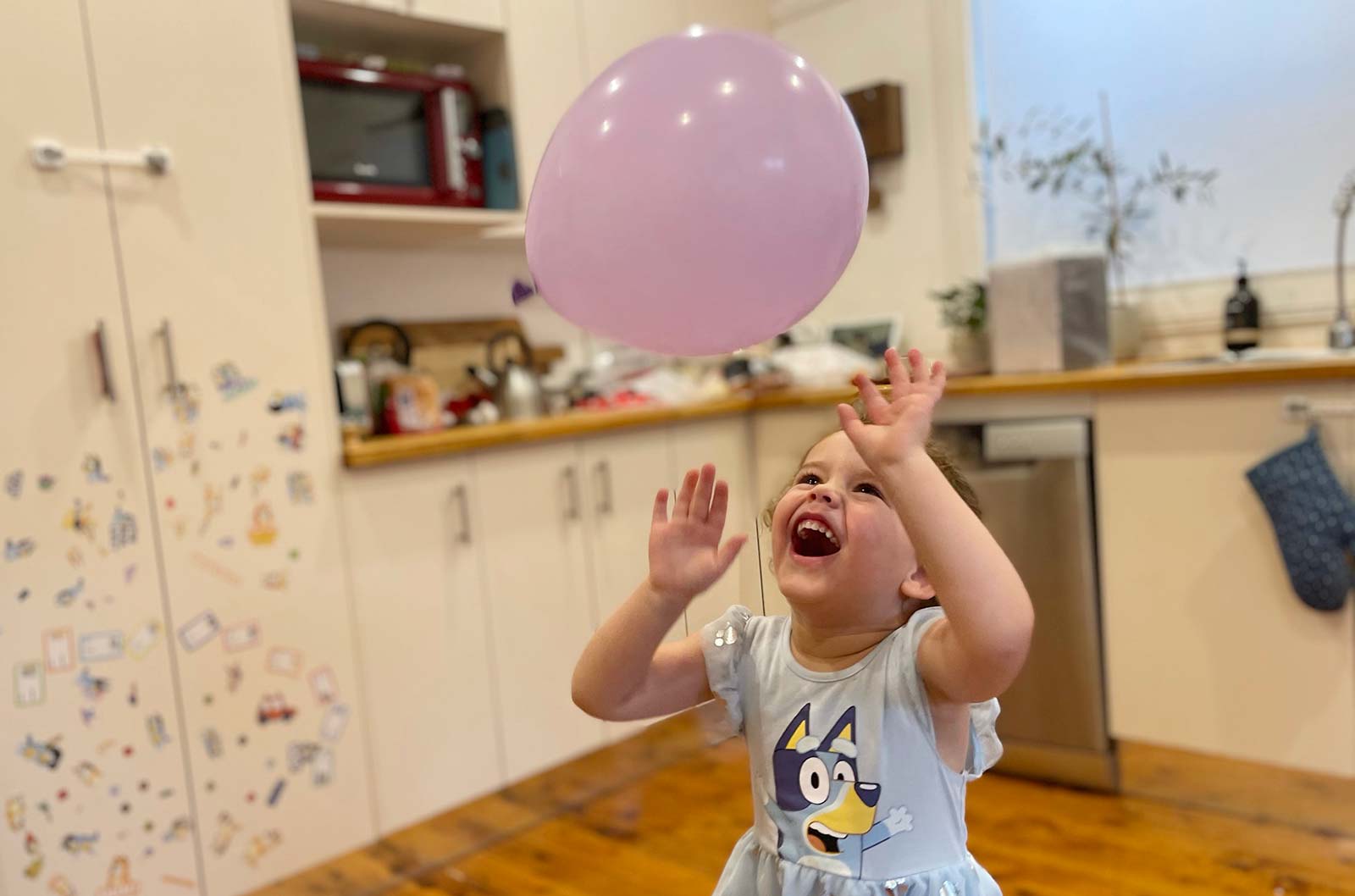 How to set up Keepy Uppy on a Google smart speaker

If you’re making a “Keepy Uppy” routine for a Google Nest speaker or smart display, you’ll want to start in your Google Home app, and look for the section marked routines.

Press that, and you’ll be taken to your list. It doesn’t take much to find the plus button at the bottom gets you making your own, which is what we want.

From here, you’ll write how to start the routine, which we’ve called “Keepy Uppy”. This is essentially what you’ll say to Google, as in “Hey Google, Keepy Uppy”, which is especially easy to teach the kids.

Next, you’ll program your routine. Fortunately, this is an easy routine to get the hang of, and merely requires you to play and control media, and maybe set the volume and add a sentence or two.

The main part is media control, so do that first: select “play and control media”, select “music”, and then type in “Keepy Uppy from the Bluey soundtrack”. This section works just like how you’d talk to Google in the first place, so you’re selecting a specific song, but you can also dive into “Music Settings” below and select the service you want it from. If you only have a free Spotify or YouTube Music account, you can select where you want it from, because some services may play this song differently. 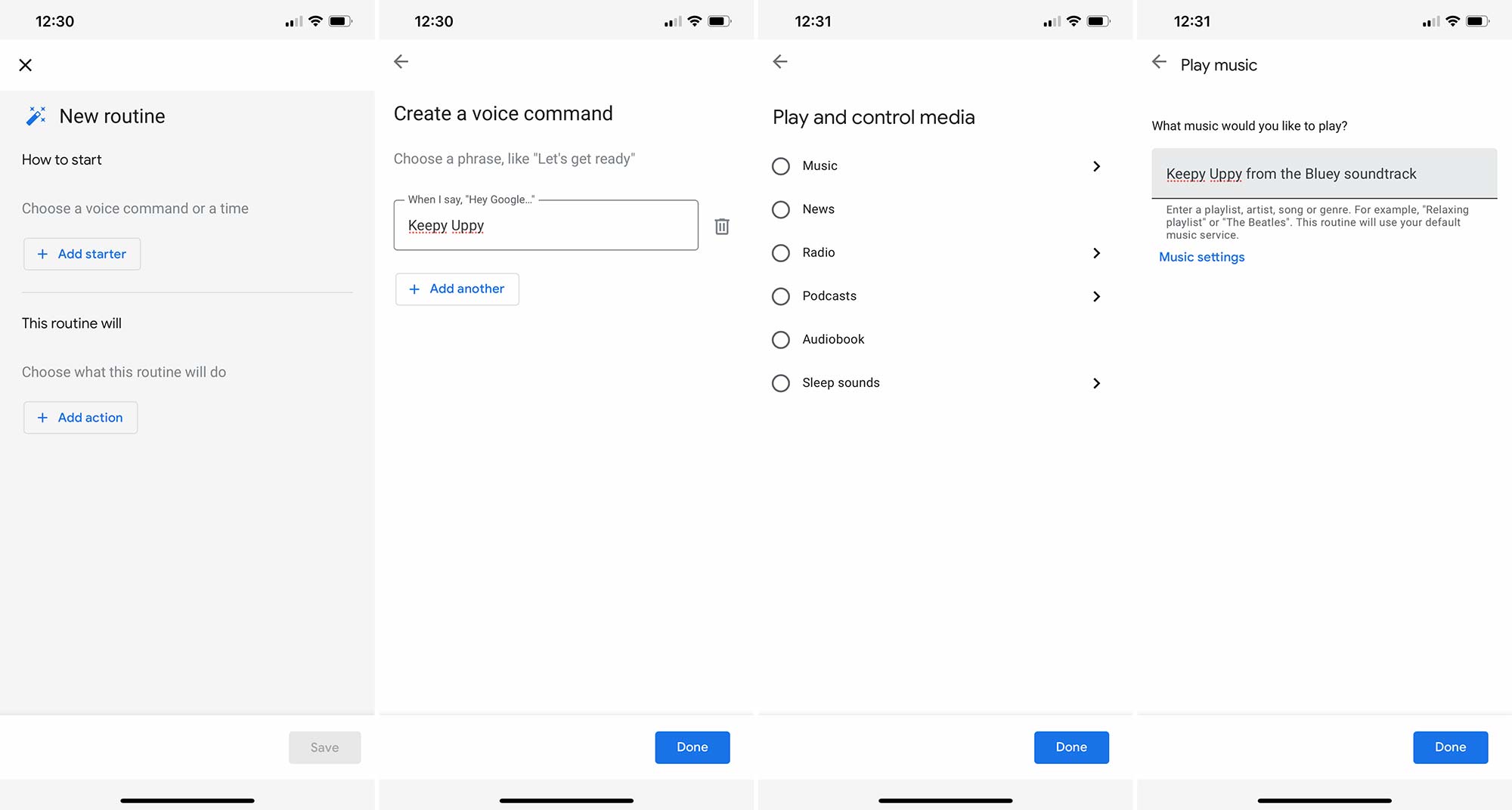 Once you’ve written the song in, press “Done”, and then add any other steps you’d like in the routine. In our routine, we changed the volume to 50 to make sure it was nice and loud, and also had Google read out “Get that balloon ready” before the song began.

When the routine is ready, wait a few minutes, and then try it on your Google device, calling out your routine action for it to kick in. 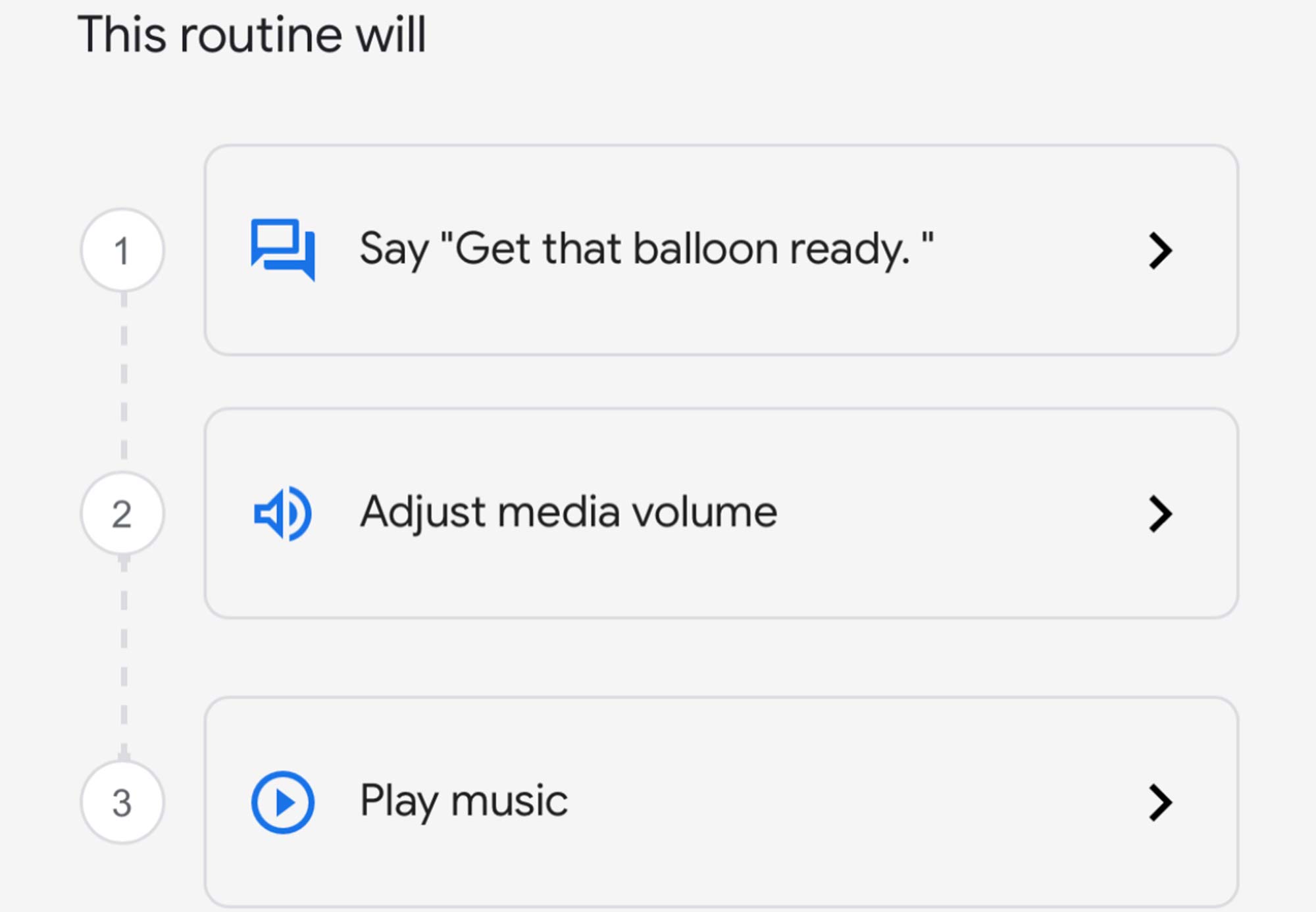 If you have an Amazon speaker, the effort isn’t dramatically different, with a routine being made there. Press the “More” item in the menu bar, and select “Routines” to find out what you presently have. The add button is a plus in the top right, compared to the bottom right for Google’s Home app.

Amazon will have you add two names: one is the name of the routine, and the other is how you trigger it. For “Keepy Uppy”, we’ve named them the same, since they don’t need to be different, but you can change them if you want. 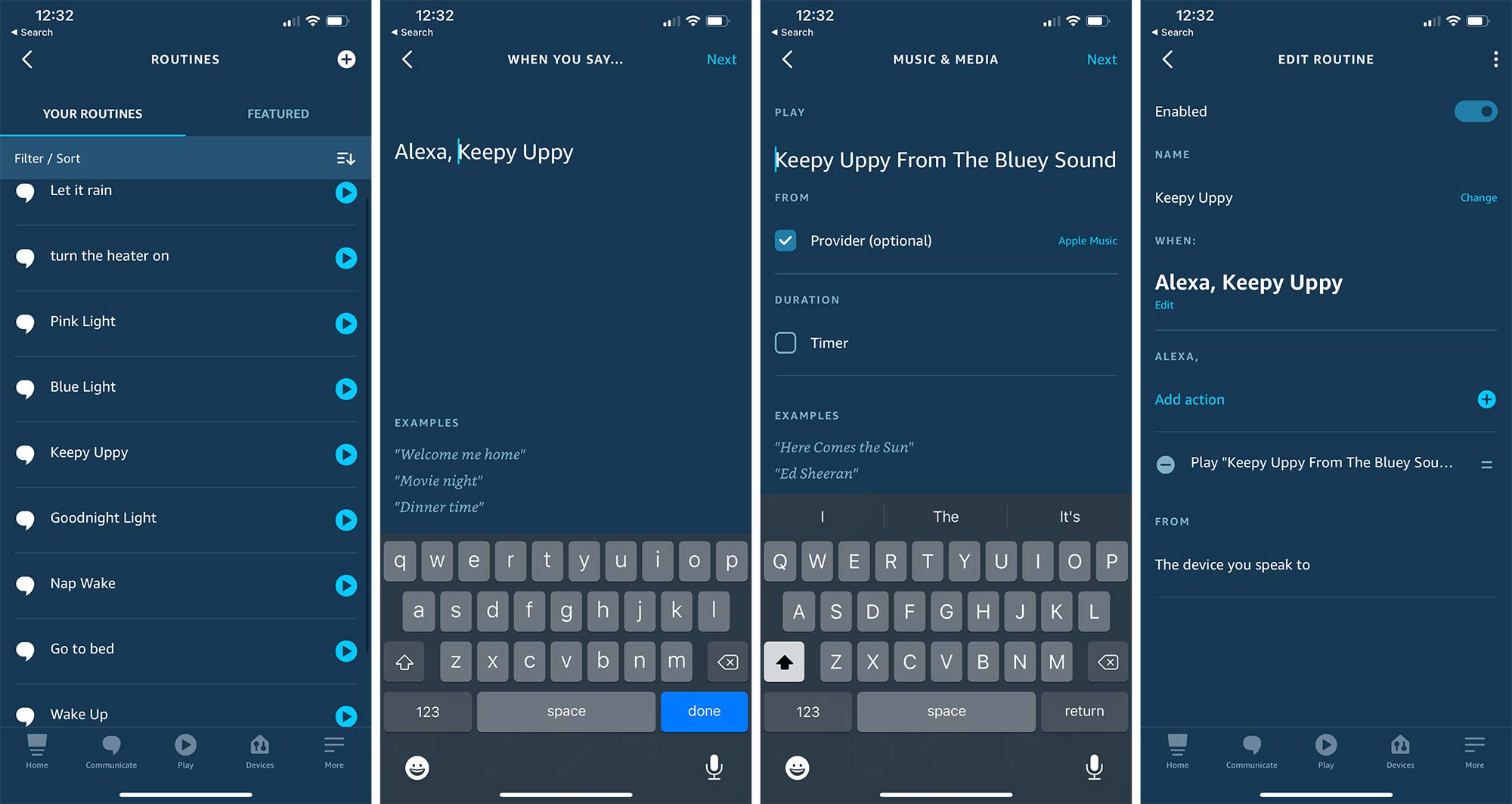 After that, you add your actions, and it’s much the same process: type in the name of the song you want to play and from where, choosing your music provider, and any other actions you want Alexa to do.

We’ve found Alexa to not be as reliable with triggering the right song, so you might want to try talking to Alexa to find the right way of saying “Keepy Uppy from Bluey” or any other song you’re trying to trigger, as this is largely dependent on how the speaker interprets what you tell it.

Can I add any other songs or make my own smart speaker routines?

Of course, you can always add other songs for any routine, provided you have a music service talking to a smart speaker, and you can do other things, as well.

You might have a bunch of smart lights you want to change colours with: you can tell your routine to trigger those, you just need to make sure they’re linked up. You can also get it to tell you the weather or send a message around your home. Really, the sky’s the limit.