Which is best: Apple AirPods Pro vs Beats Solo Pro

Can’t decide between the tiny noise cancelling AirPods Pro or the slightly bigger on-ear Solo Pro? No worries, we’ve got you covered.

Two new noise cancelling headphones and Apple is responsible for both of them. Mostly, anyway.

Both Apple and the Apple-owned Beats have options in the noise cancelling game this year, with a pair on in-ears shaped like the AirPods in the AirPods Pro, and a pair of on-ears from Beats in the Solo Pro. They’re both noise cancelling, both run on the Apple H1 wireless chip, both work on iOS and Android, and both cost a very similar price.

So which one is better overall? 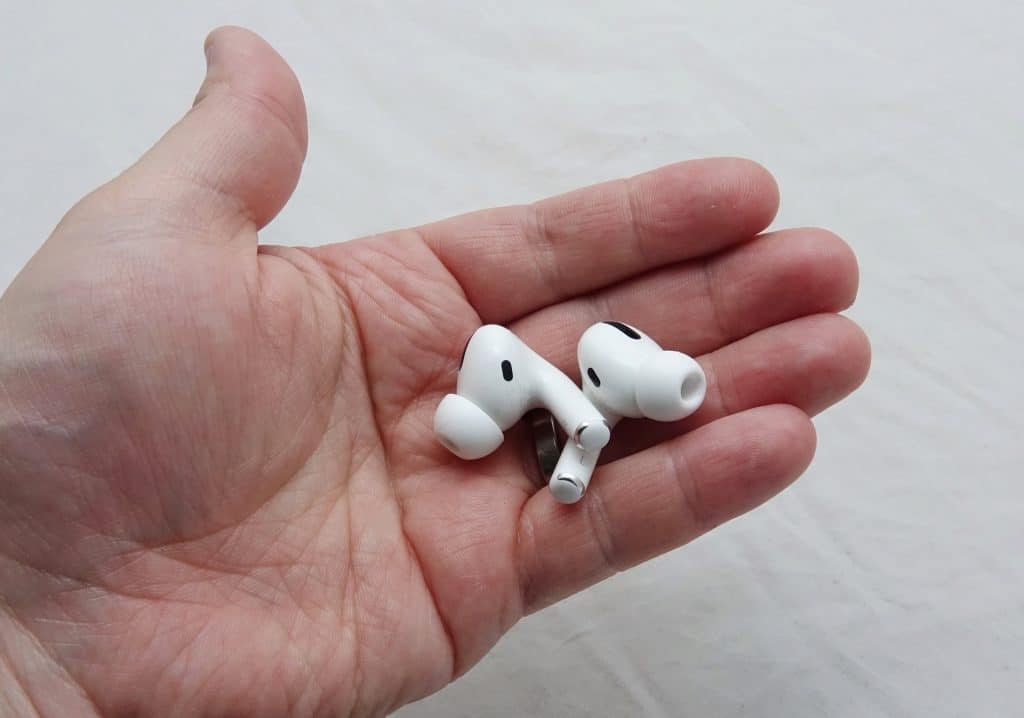 First things first, let’s talk design, because the two products are very different, so much that it doesn’t feel like a fair comparison.

Over on the other, the Beats Solo Pro are clearly larger headphones, with a bold colour, “b” logo, and a design that isn’t pocket-friendly at all. They fold up, sure, but there’s no way you’re stuffing these headphones into your jeans any time soon, unless your pockets are more like Mary Poppins’ seemingly never-ending bag of goods and tricks.

Neither one has a design edge of the other, that said, so we’ll call this a draw. 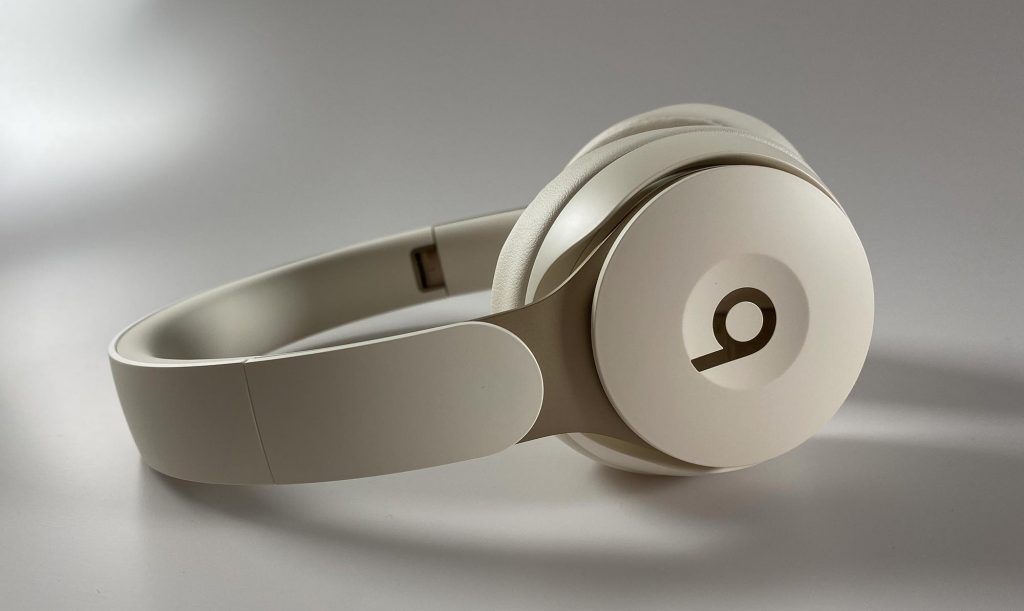 Both the AirPods Pro and Solo Pro headphones offer different designs, but they also offer varied approaches to durability, too.

If you happen to have the AirPods Pro, your durability includes water resistance, but not on the Solo Pro headphones. However, if you have Beats’ latest approach to on-ear noise cancelling headphones, you’ll forgo the water resistance in exchange of a design that not only has aluminium reinforcement, but also a super flexible band.

We’d all that a varied win for each, if it was us. 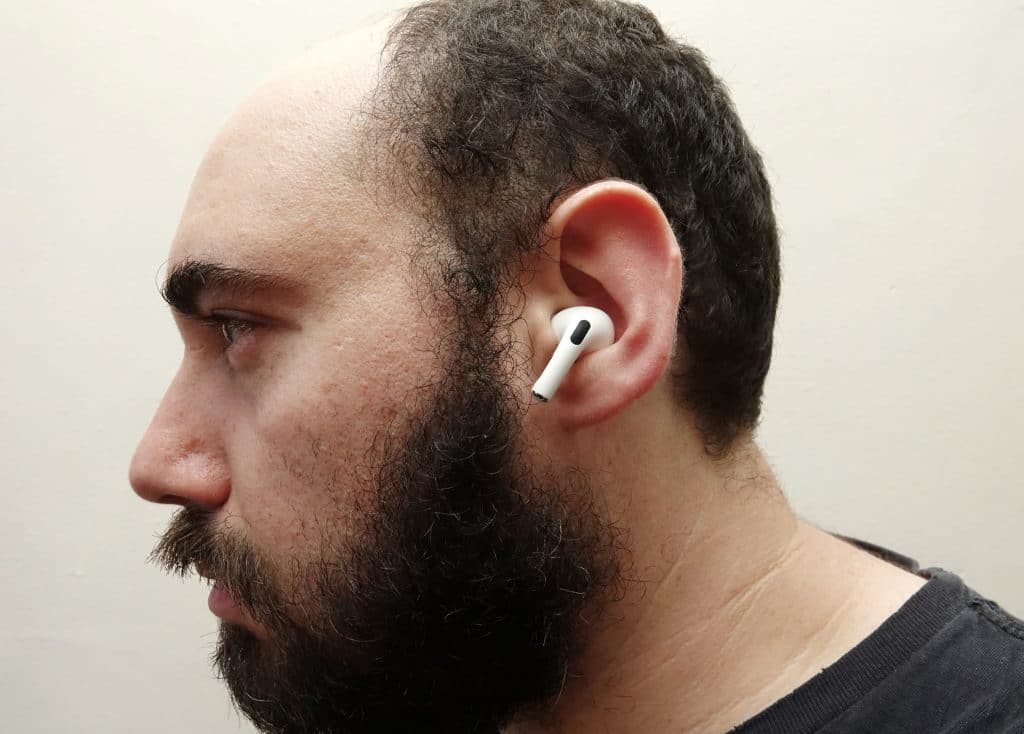 In the battle of comfort and fit, both the AirPods Pro and Solo Pro are so totally different, it doesn’t seem like a valid fight.

If you prefer in-earphones over on-ear phones, you’ll find the AirPods Pro more comfortable. However if you don’t like in-ear, there’s a good chance you’ll like the on-ear Beats Solo Pro more.

However we’re giving this one to the AirPods Pro for one basic reason: the Beats Solo Pro can feel like they’re crushing your skull for the first few weeks, and that’s something the AirPods Pro never achieve. 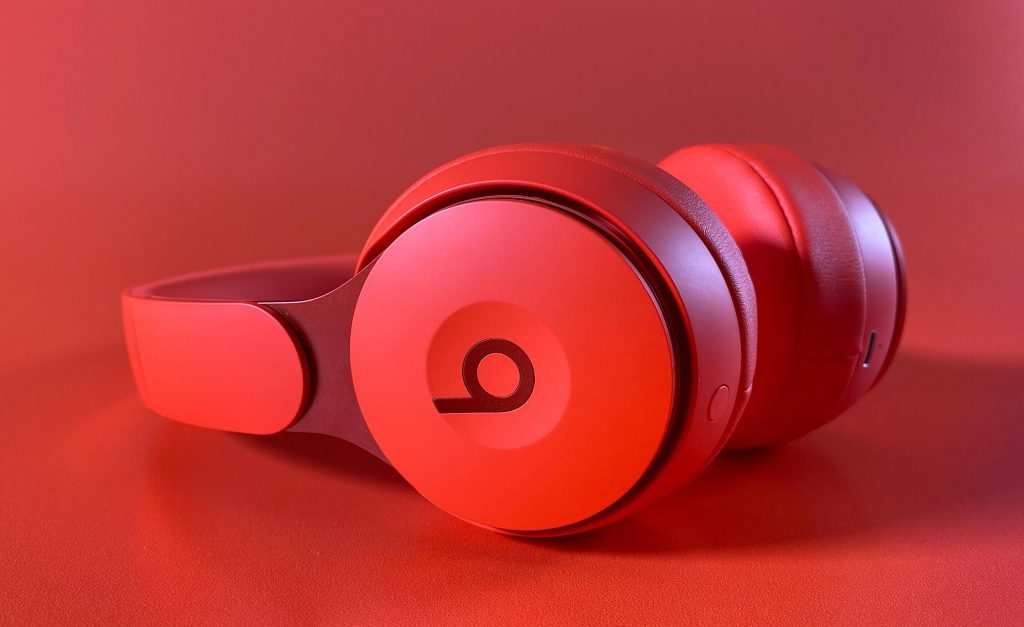 The battle of controls is one that doesn’t feel like a fair fight, either, as the Beats Solo Pro offer more surface area to throw in controls than the diminutive control stalk found on the AirPods Pro.

As such, the AirPods Pro only offer transparency mode triggering and Siri activation, while the Beats Solo Pro can give you volume up, volume down, and track control on the one right headphone, while the transparency button is on the left. Beats wins this one hands down, or even hands up, as you may want one to control the headphones, clearly.

With the Apple H1 chip in both, there’s no clear loser here, only winners, as the Apple AirPods Pro and Beats Solo Pro perform identically, maintaining consistent wireless connections.

Not every Bluetooth gadget performs beautifully in keeping the connections clear, but as both of these use the same chip, these two definitely do. 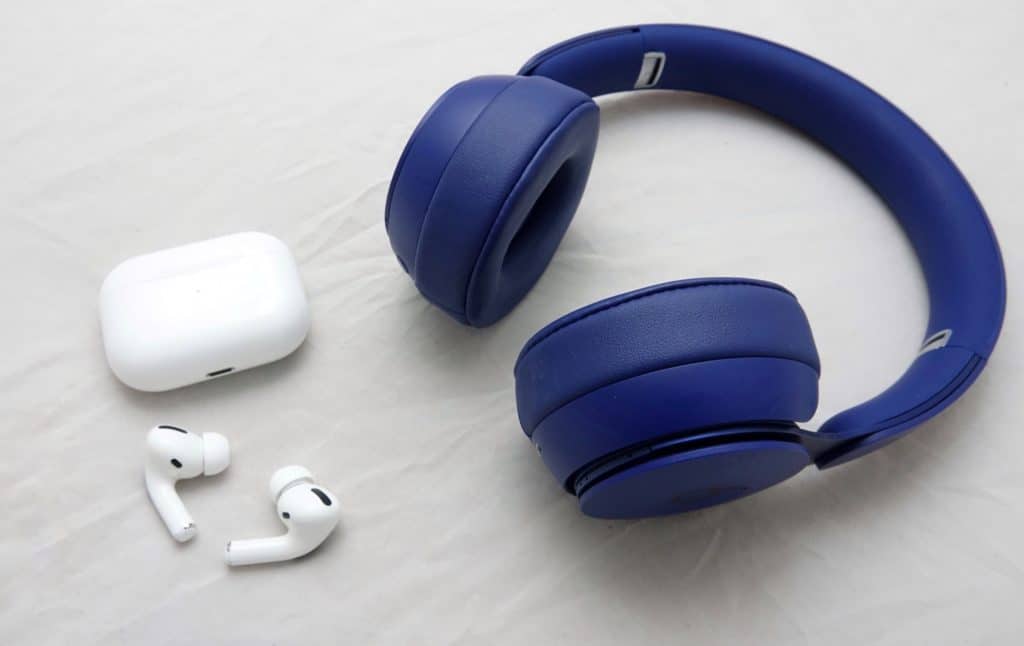 Even upon first listen, it’s pretty clear Apple’s AirPods Pro are a step above the standard AirPods, and that’s helped by the fact that they’re not an open audio style of listening.

However even though Apple has clearly pushed ahead of its previous efforts in the Pro take for the AirPods, Beats still feels like it has an edge.

Apple’s take on audio processing does come with a good 200 changes to the equaliser per second, and while the sound is balanced, Beats’ take feels bolder. There’s more strength in the bottom end, more punch and focus on the mids, and while Beats is no longer doing the overly pronounced bass like it once did, the sound still feels better.

Both the AirPods Pro and the Solo Pro sound great, but if we had to choose one, we’d call the Beats Solo Pro the winner here, as it definitely has something of an edge. 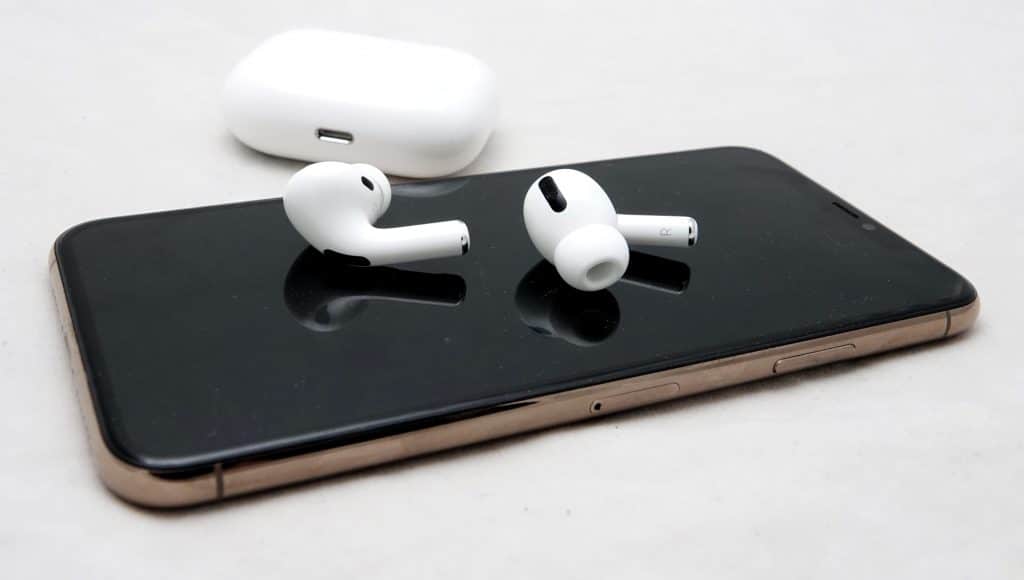 A part of almost every modern pair of noise cancelling headphones, transparency modes open up the microphones and typically amplify the outside world so you can hear through them while you’re wearing headphones. Think of it as a feature that helps you listen to announcements without taking off your headphones.

Both the AirPods Pro and Beats Solo Pro deliver that, but only the Solo Pro achieves it in such a way where the audio feels natural.

Like most other competitors, Apple’s approach to transparency mode means the sound is a little more amplified than in real life, and is rather like listening to someone speaking through a microphone. Beats has taken a different approach, and the sound you hear is not like that at all, set to the volume of the world around you. It’s probably the best interpretation of an ambient/transparency mode we’ve ever seen. 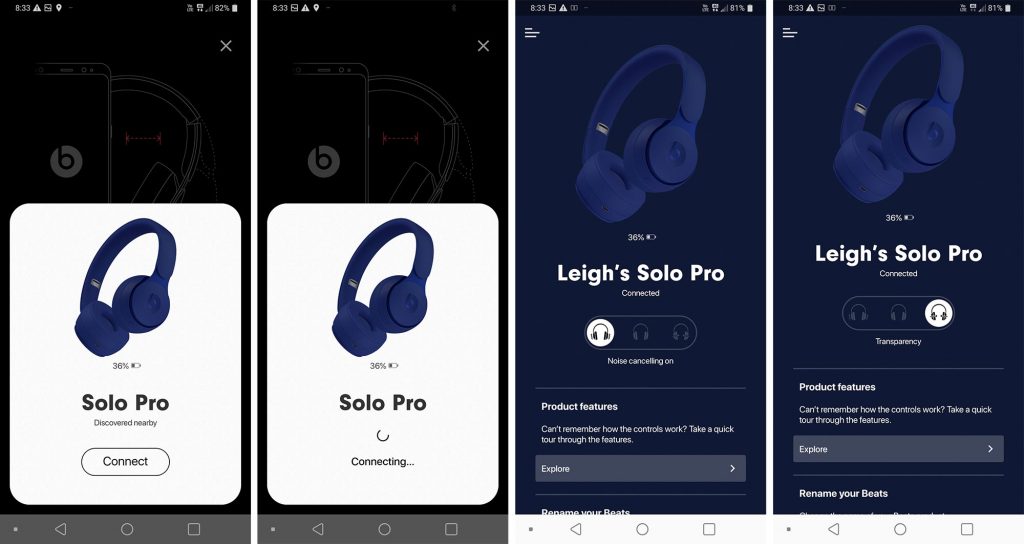 Apple might make the iPhone, but that doesn’t mean its products can only work on the iPhone. You can make the AirPods Pro work on Android, too, but out of these, only the Beats Solo Pro headphones go beyond basic Bluetooth support for Android.

With the AirPods Pro, you have no way of tweaking anything on Android, so you better like the controls you’re lumped with. No ear-tip test, no control changes. It’s barebones for Android customers, but more fully featured on iPhone and iPad because it’s baked into the operating system.

Beats’ approach is totally different, and provides an app for Android customers that lets you change transparency modes and check battery life. It might seem basic, but it’s a step towards the platform agnosticism more manufacturers — Apple included — probably need to properly consider.

Even though the Beats Solo Pro and Apple AirPods Pro are different sizes, they both offer pretty similar battery life with noise cancellation switched on. You’ll find a little over 20 hours for each, though Apple’s AirPods Pro will need to be taken out and recharged every four hours or so, because the individual earphones only store so much battery at once. 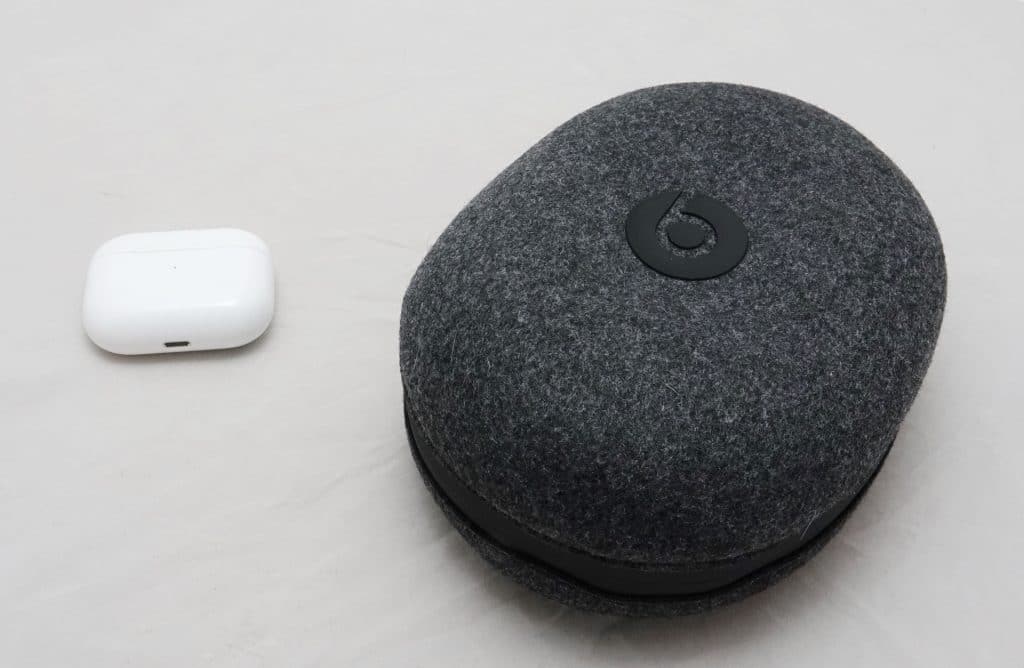 Both the Solo Pro and AirPods Pro come with cases and are both different sizes, but only the AirPods Pro case feels durable enough to survive a drop.

To Beats’ credit, the Solo Pro headphone case is made with felt from a recycled plastic, making it a little more eco-friendly than other cases you’ll see, but Apple’s is the only one we’d trust in a tumble.

At nearly the same price, there’s no clear winner for value in either pair.

We’d call this on par, and both offer much for muchness in value.

What should I choose: Apple AirPods Pro or Beats Solo Pro

If the argument for the best choice of these two audio products solely came down the features in this guide, we’d declare it proudly: the Beats Solo Pro are among the best portable noise cancelling earphones you can find.

The problem is it’s not that clear, as the Apple AirPods Pro earphones and Beats Solo Pro headphones are in totally different classes of tech.

Essentially, if you’re looking for something small, capable, and compact, and you’re using it mostly with iOS or macOS, the Apple AirPods Pro seem like they’re the winner. However, if you’re looking for better audio clarity and a more acoustically clear take on transparency, we’d look at Beats’ Solo Pro, even though they’re not quite as pocketable.

There are, of course, other choices out there, with Sony’s WH-1000XM3 headphones and WF-1000XM3 earphones also possibilities, and if you’re looking at these two, we’d probably factor them in, as well. 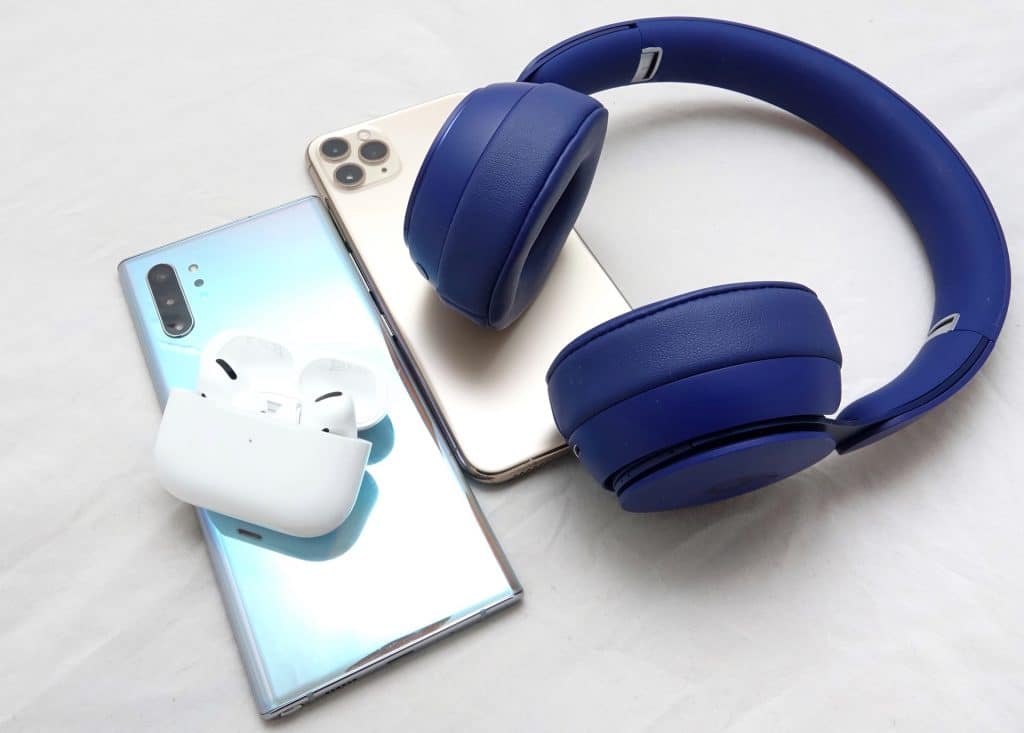 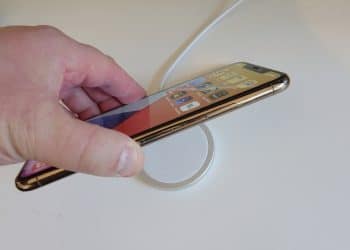