Working from home and podcasting has something in common, with better sound needed for your voice. But your laptop mic isn’t the solution, and if you plan on going to a bigger mic, you’re going to want to keep that thing in place, which is where the Rode PSA1+ comes in.

You probably won’t believe it, but for a good few years, this journalist was producing his award-winning podcast The Wrap by holding the mic. Gripped in his left hand, head aimed in a certain way, hand-holding his choice of microphone, the Rode NT-USB, would make him feel a little like he was talking to an audience, though it wasn’t always the best idea.

A minor slip in grip as the hand moved down the barrel could be picked up as the position changed, and the sound would all of a sudden be different. It would often mean multiple takes for the same line, all of it adding to the production time on a podcast, meaning less time spent doing other things, like spending time with the family.

It took him far too long to jump to an actual microphone stand, partly because he didn’t feel he need one.

And when he did, everything got a little easier.

The microphone sound became consistent, the position was always reliable, and it also felt like he was in a proper recording studio, even if it was the back room shared by the dogs, who he often stared at when they decided to clean themselves while a recording was going on.

His first boom mic stand was the Rode PSA1, a standard in the community of podcasters and one that worked a treat, but there’s now a new model, as the one becomes the one plus, so what’s changed? 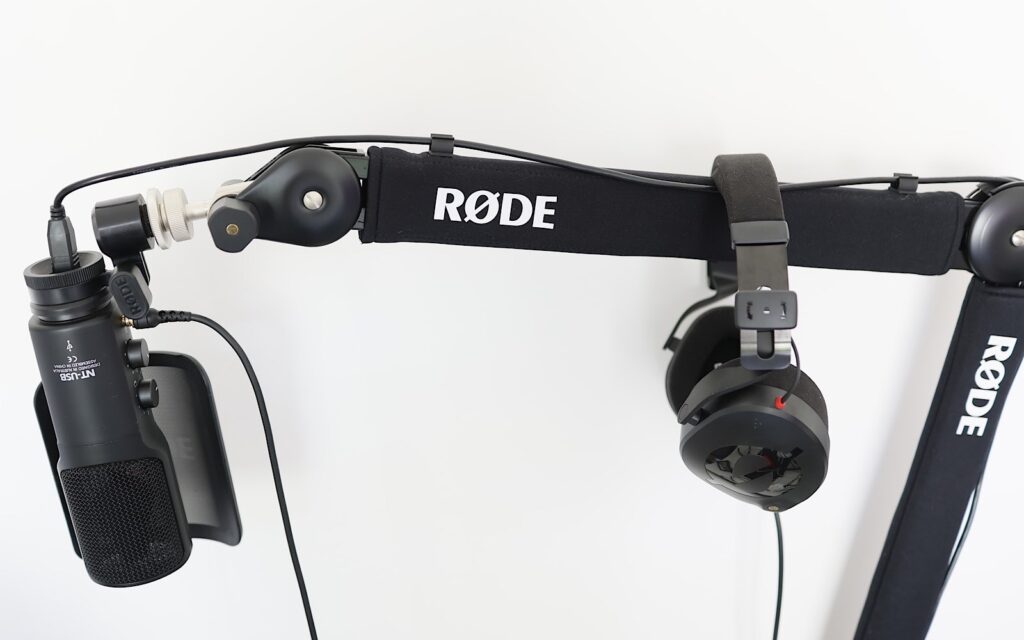 A variation on a theme, the Rode PSA1+ is a slightly improved version of the Rode PSA1, though if you’ve never seen either, you’d be excused for knowing what’s different.

Both are modelled on the twin metal rods held in place by hinges, adhering to a desk either by a clamp or dropping into one of the holes you can find on modern desks for running cables through. Rode includes an accessory to deal with both, with the result largely being the same on either: a microphone stand that can fold and move around easily, holding a microphone in place for use however you need, be it podcasts, videos, or even just having the best darn voice in your WFH Zoom meetings.

Where the Rode PSA1+ differs from its sibling is slight improvements in design. There’s a rubber pad on the clamp, some matte and shine-less metal joints to hold the mic in place, and inside under that new neoprene fabric wrap citing “Rode” twice on each length of the boom arm, the internal springs are damped to keep noise at its minimal. At the same time, the weight capacity has been improved, jumping from 1.1kg on the PSA1 to 1.2kg on the PSA1+.

In short, the changes are small, but if you’re someone who needs things to be quiet, the idea is that the PSA1+ improves things even more, keeping things clear and easy.

However like all boom arms, the Rode PSA1+ has one purpose: hold a microphone, whether it’s directly or with a shock mount. Dealer’s choice, really.

Set the mic stand up one of two ways — hole in the desk or clamp the whole thing down — and you’ll find the mic stand itself just positions neatly into the clamp hole, now bigger than the previous generation.

It just slides in and starts working, ready for you to sort up your microphone, hanging down for you to start using it.

While there’s clearly a little bit going on in this new version, Upon first glance, the main change to the Rode PSA1+ is actually the look, obvious from the neoprene wraps featuring the maker’s name. They cover and deal with any extra noise you might find from the PSA1+, and even hide the truth: under the wrap, the PSA1+ looks just like its predecessor.

Covering it with a long black bar of fabric does give the Rode PSA1+ more a look like its competitor from Blue Microphones, the Compass, and even like a competitor from Thronmax.

Those fabric strips help make the PSA1+ look just that little bit extra stylish, and even give you clips to hold down the obvious cable coming down from your mic, which for our Rode NT-USB is a simple USB cable down the side. 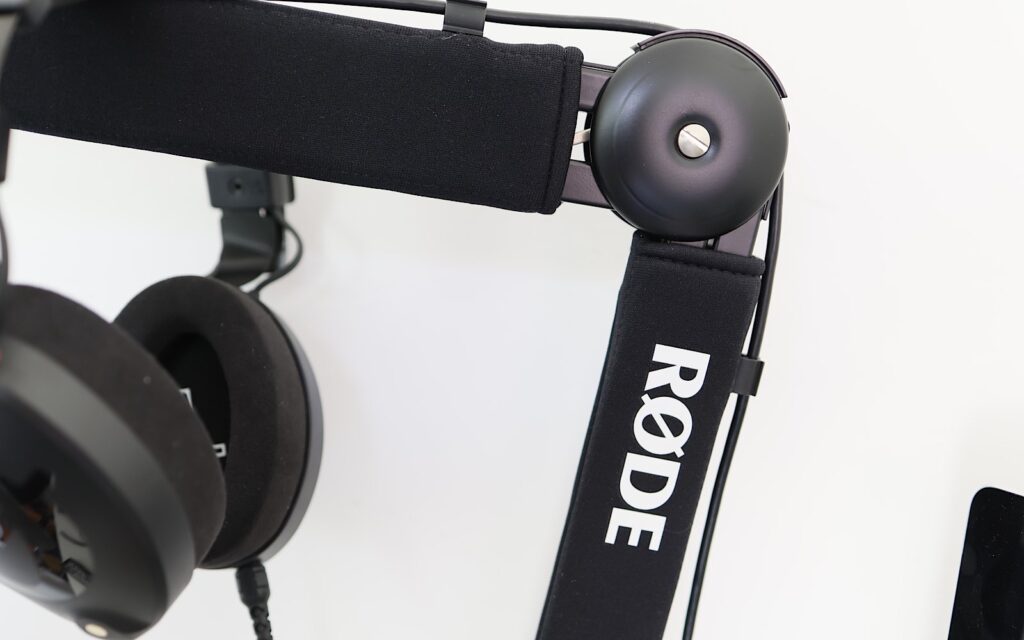 What does the PSA1+ need?

Weirdly, you can’t take off those neoprene fabric wraps on the side and put them back on again, even if you wanted to change them or clean them.

It’s the sort of thing that surprised us, because things can happen, and yet Rode didn’t factor that in. There’s no Velcro to snap the fabric wraps off, as that would make that easier.

Rather, if you don’t want the name “Rode” to be slapped all over your mic stand, you’re going to have to snip them off and deal with the twin rods of metal underneath, which makes it look just like its PSA1 predecessor.

Unlike its PSA1 predecessor, however, the mouth of the clamp mount has changed and is wider. That’s not necessarily a bad thing, but does mean if you want to upgrade, you need to take off the old clamp and stick on the new one. You can’t help but feel Rode could have found a way to make these work together, but it’s just that little bit extra to do.

And if you happen to have a thick desk, the Roda PSA1+ is just that little bit harder to get to clamp to your desk than its predecessor. You can thank some slightly thicker rubber on the clamp for that, and fitting it to our IKEA hack of a desk made of a bookshelf and a plank of wood meant removing some of that rubber just to get the whole thing to mount cleanly. We’d love a bit more latitude from Rode — just that little bit more — as the clamp is a touch smaller in what it can accommodate when you leave the rubber in place.

Is the Rode PSA1+ worth your money?

For that price jump, you get a little more resistance to noise and a slightly more professional look, complementing home studios quite nicely, while also offering Rode some in-home advertisement if you ever aim the camera its way.

Given the $50 difference, we don’t think it’s such a bad change, and basically gives podcasters looking at Rode’s arms a bit of a choice: do you want a great microphone arm, or one that’s a little more geared at pros? That’s really the choice when you’re comparing the Rode PSA1 vs the Rode PSA1+, picking improvements in professionalism in the PSA1+ over the still strong excellence in the original. 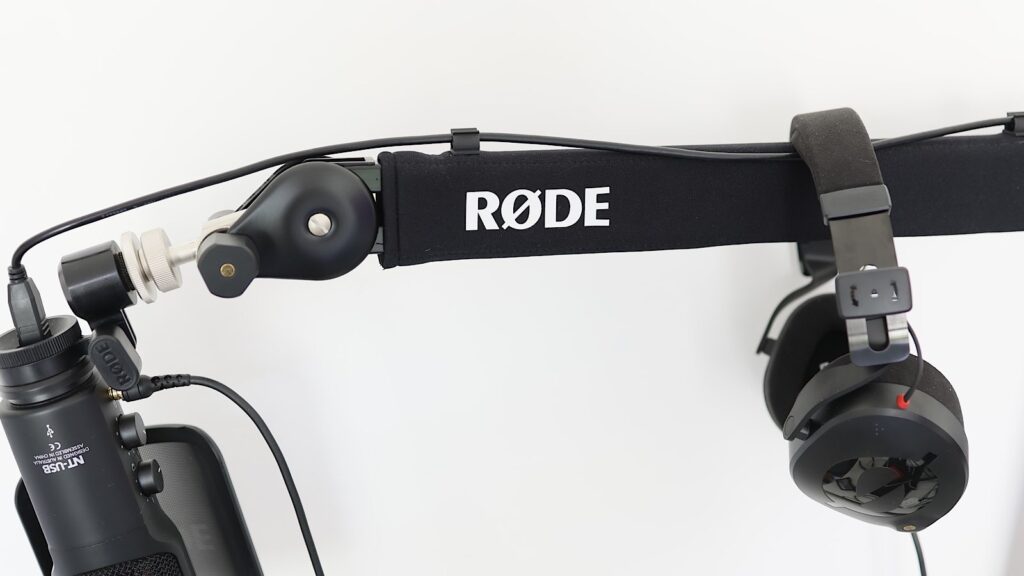 For us, it’s an upgrade worth having, and one that makes the home studio look that little bit better, while also providing it just that little bit extra quiet when you need it to be.

Silent and strong, the PSA1+ is an important part of this podcaster’s setup, keeping his hands from messing up the recording, as well.

Are there things that could be improved upon? Sure. Your desk might need a little bit of attention to bang that mount on, and we’re actually surprised Rode didn’t think about replaceable and interchangeable colour wraps for the PSA1+ given it makes multi-colour accessories for other things, including multi-coloured cables for its recently announced NTH-100 headphones. You can get multicoloured cables, but you can’t get multicoloured additions to the microphone stand.

But even with this quibbles, the Rode PSA1+ is a great addition for people who need a solid mic stand to hold that mic in position and not make a noise, you know, beyond the noise you need to make. Recommended. 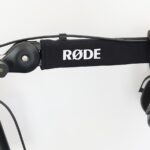 Rode PSA1+ microphone stand
The good
Well built
Includes cable management
Supports both a desk mount and a hole in the desk
Quiet operation
Still a fantastic way to keep a microphone on your desk
The not-so-good
You can't detach and reattach the fabric on the arm
Different mouth size means it can't just mount on a previous PSA1
Feels like it offers less space to mount the desk
4.3