The latest generation flagship from Oppo is a slick looking phone sporting some high-end parts. Is it enough the make the Find X5 Pro a winner this year?

It’s 2022, and there’s a good chance you’ve seen a phone in the past few years. Certainly, if you’re considering the X5 Pro, you’ve probably seen a phone before, and if you have, the design isn’t likely to set your eyes on fire. It doesn’t break moulds, but it does look pretty nice all the same.

The Find X5 Pro is a little like a phone from the future, sporting a slick liquid metal inspired design in its “glaze black” look, which is a little like what happens when platinum meets the T-1000 from Terminator 2: Judgement Day. This isn’t Oppo’s judgement day, so to speak, but it is a phone you might make a judgement on.

And in the area of aesthetics, that judgement is slick. It’s a stylish phone from the back and yet another big touchscreen slab of slightly curved glass at the front, which may as well make it a phone, though one that doesn’t look like others. 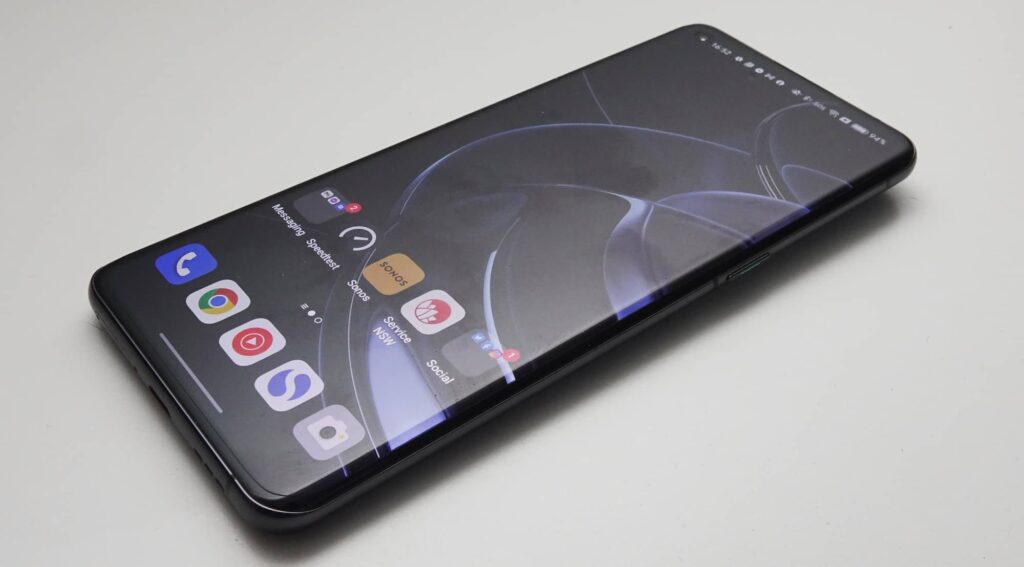 Inside the X5 Pro, you can expect a bunch of high-end bits, starting with the Qualcomm Snapdragon 8 Gen 1, the same chip Australians saw in the Galaxy S22+. It’ll be paired with 12GB RAM and 256GB storage, the latter of which is fixed with no microSD slot to upgrade things.

There’s your typical assortment of high-end wireless features, supporting 4G and 5G, Bluetooth 5.2, and 802.11a/b/g/n/ac/ax WiFi 6, NFC for Google Pay, and GPS, with the only physical wired port being the USB Type C port for charging, data transfer, and wired earphones if you need them.

Three cameras are found on the back, with a 50 megapixel standard wide camera set to F1.7 and with 5-axis image stabilisation plus support for 4K, with the 50 megapixel ultra-wide F2.2 camera also handling 4K, too. There’s also a 13 megapixel 2x optical camera on the back set to F2.4. And there’s Hasselblad branding there, as well.

It all sits under a 6.7 inch Quad HD+ 3216×1440 AMOLED display with a 120Hz refresh rate and a staggering pixel clarity of 525 pixels per inch. Corning’s Gorilla Glass Victus protects the display from scratches, while the whole phone comes with IP68 water and dust resistance.

Under that screen is an in-screen fingerprint sensor, helping you to log into the phone, while the front-facing camera acts as a form of facial recognition, too.

The battery is a combination of two battery components, two cells connected to equal 5000mAh, with both wired and wireless fast charging. 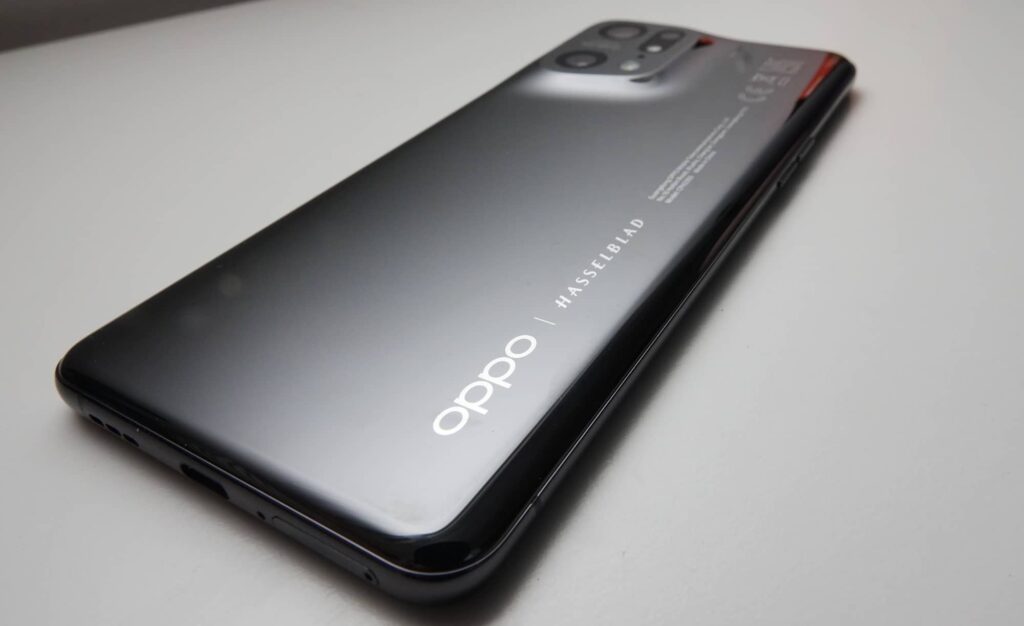 Unlocking the phone, you’ll find a fingerprint sensor built into the screen, but the experience is less than reliable. We reckon there’s a good 50/50 chance your digits will unlock the phone when you press your finger to the screen, and it was very, very unreliable to do so.

Oppo has thrown in a camera to work as a backup, something that’s largely the norm on Android phones, and it is a great help given the screen’s fingerprint sensor is so damn unreliable.

It’s not the system spec making that a problem, either.

Inside, the combination of the Snapdragon 8 Gen 1 and 12GB RAM is a solid set of specs enough to keep the system running smoothly, and you’ll find the Find X5 Pro is just about as good as any other high-end phone out there.

Benchmark-wise, it's just about where we'd expect it, and in practice, we found apps and games performed very well on the handset, with minimal lag and issues throughout its use.

It's a solid little performer on the system side of things, and the same goes for the 5G. While we suspect mmWave is missing in action, cutting back on some of the future-proofing we'd have hoped for, the sub-6 5G that it does have offered us speeds in Sydney on Telstra's 5G network as high as 380Mbps.

Granted, your mileage may vary depending on where in Australia you use the phone, but it can give you a 5G fix with no problems. 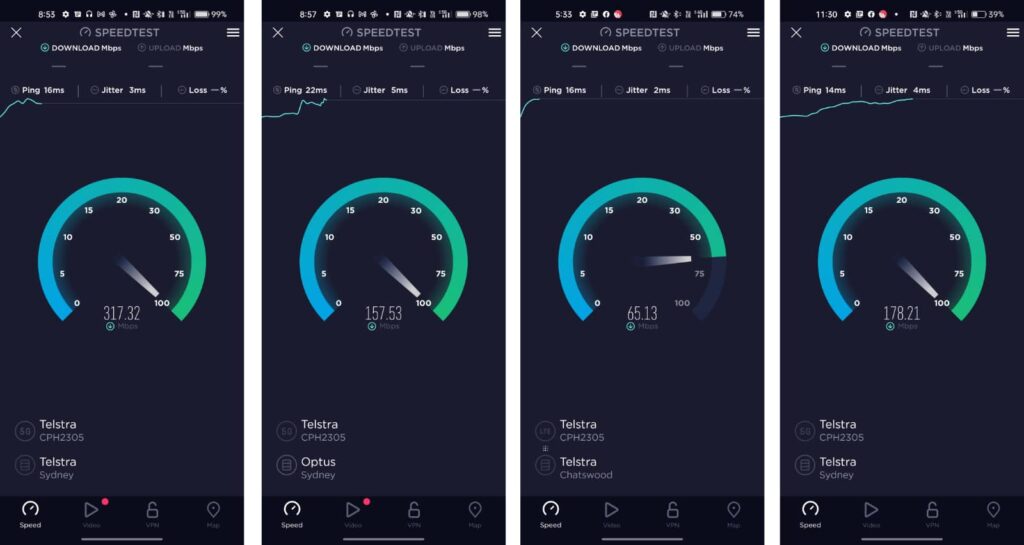 It can also let you snap some pretty nice photos, though it'll depend on what you're capturing and when the camera is behaving.

You'll be armed with two 50 megapixel cameras in the X5 Pro, and they're a bit of a change from what we experienced in the X3 Pro before it. While that phone sported a unique microscopic camera to let you get properly up close and personal, the X5 Pro switches that out for a 50 megapixel standard wide, 50 megapixel ultra-wide, and a 13 megapixel telephoto. It's a thoroughly more normal camera setup to be sure, and more like what the other mobile brands will offer.

Granted, it's not as complex as some others, but it's also fairly fine, with a decent amount of megapixels and strong imagery in day and night. Most of the time, images are crisp in daylight, while night time images manage to often look nice, too, as the sensor lets in light from multiple images, stacks them together, and then gets Oppo's Neural Processor Unit (NPU) to punch out some lovely shots.

The ultra-wide angle is particularly solid, providing you some decent macro abilities if you want to get close, making up at least for some of the telephoto which feels less impressive in comparison.

Set at only 2X, the 13 megapixel telephoto component of the Find X5 Pro's camera isn't just lower in resolution, but also lower in zoom range than others out there. With Apple offering 3X in the iPhone 13 Pro and 13 Pro Max, the Google Pixel 6 Pro providing 4X zoom, and Samsung offering 3X and 10X in the S22 Ultra, Oppo is on the low end of the camera zoom scale, and it's not a remarkably impressive look. 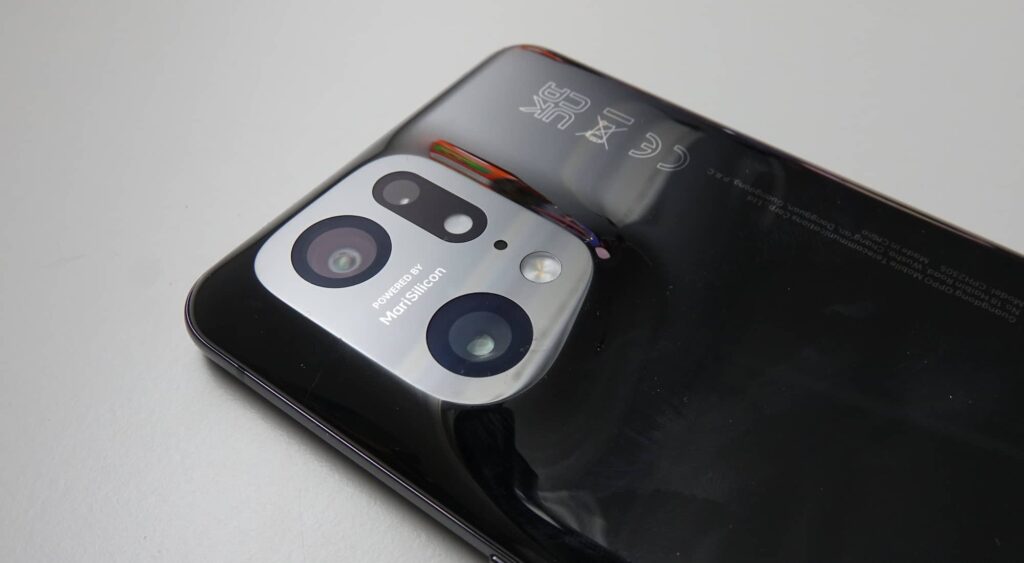 Thankfully, that ultra-wide camera is stellar, which helps lift the whole thing up.

But while the ultra wide angle camera shines, Oppo's metering software can be really wonky, producing either disastrously slow analysis for bright images in daylight or a total mess when it settles on it's idea of the right balance which is also clearly utterly wrong.

We've never seen a phone so spectacularly fail with metering in this way before, but in daylight when the metering is hit with a sunny look, the images become drowned out by extreme brightness and blown out colour. It's madness, and you're basically left waiting for the phone to work out that, no, this isn't how images should look, and to get its act together, which it doesn't always do.

The result is that daylight shots from the Oppo Find X5 Pro can end up looking like a blown out mess of white and extreme highlights, as if someone learned how to use the curves controls in Photoshop and just said "turn it up". You have to hope the NPU is fine tuned to handle this better, because at points, you're just waiting for the X5 Pro camera to catch up and metre the shot correctly.

In 15 years of reviewing phones, I've never seen a single phone camera handle light in this way, and it happened on more than one occurrence enough to say it's either an obvious bug endemic to the Oppo X5 Pro camera or a feature. I hope it's not the latter.

At least the phone battery fared a little better, though.

In our tests, we found a day and a half was possible with our use of phone calls, web surfing, social media, and so on, though ultimately if you rely on your phone for a lot more, a maximum of a day is more likely, with around four hours with the screen on.

While not mind-blowing, that is typically par for the course in comparison to other phones in the high-end smartphone world, while mid-range mobiles typically take point for better battery life in Australia.

In short, the battery life for the Find X5 Pro is acceptable, but nothing amazing. 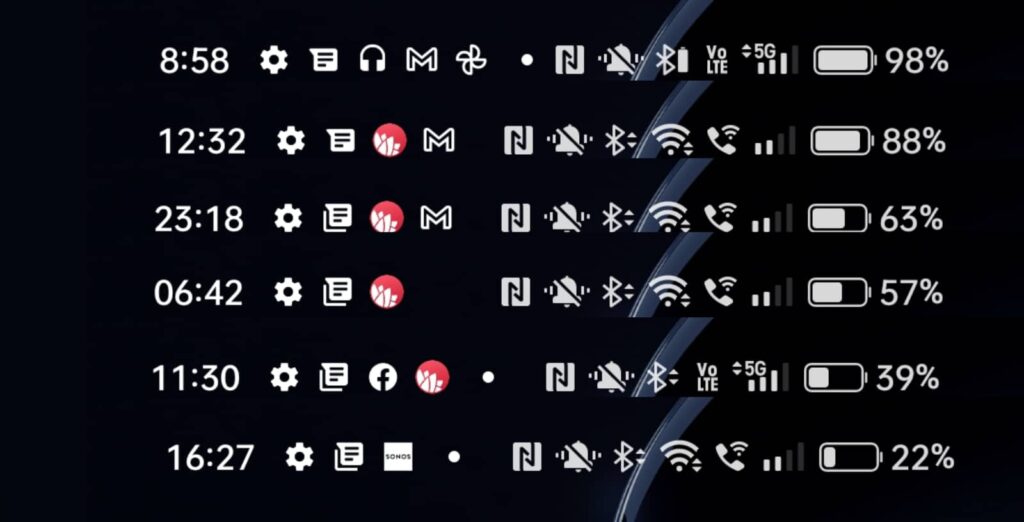 And it's a similar situation in regards to how much you pay for the thing, with the $1799 price point high, but somewhat balanced given what you're getting for the package.

It's worth keeping in mind that while the X5 Pro is no iPhone, it does come with a lovely and very high-res 6.7 inch AMOLED screen, and a staggering 12GB RAM to keep its high-end Snapdragon 8 Gen 1 performing the best it can, plus 256GB storage, as well.

That's a decent set of specs and keeps the phone competing well against what's out there from the likes of Samsung, Apple, and Google, but you can't help but feel it could be a little better, as well.

It's not just the price which feels like it could be tweaked and tuned, because that Hasselblad collaboration needs something, as well.

You get the Hasselblad name on the back, and you get a camera mode "XPan" in the software which flashes your shot like a negative and delivers a result slowly, as if taking photos on a phone was a slow process that required you to wait for the results. It then crops the top and bottom and spits out a 5 megapixel image... and that is roughly it.

Hasselblad has apparently had an involvement with the colour calibration, but if that's the reason why our images blew the highlights out, we'd rather be shocked.

This isn't like Leica's collaboration with Huawei at all. Throughout several cameras, Huawei and Leica together produced some amazing phones that delivered beautiful monochrome images (such as in the Mate 9) and excellent Leica-inspired software. As it is, the Huawei P30 Pro still stands up as one of the better camera collaborations between two companies. It's just a stellar little camera and phone.

That's not quite what Oppo has with Hasselblad. If anything, the Hasselblad branding just feels like a way to win over camera purists without any real substance. There's nothing here to make you feel as if you're taking pictures on a medium-format Hasselblad camera, and nothing feels inspired by what Blad has produced over the years. It's more just a name, and not one that really delivers on anything remarkably different, or even all that visible given its location in small fonts on the back of the phone.

Mix that with the lack of more impressive zoom range and the buggy metering for the whole thing, and you get the feeling that the Hasselblad collaboration hasn't really resulted in something massively competitive. The Find X5 Pro is good, but the camera feels like it's only halfway to getting it there. 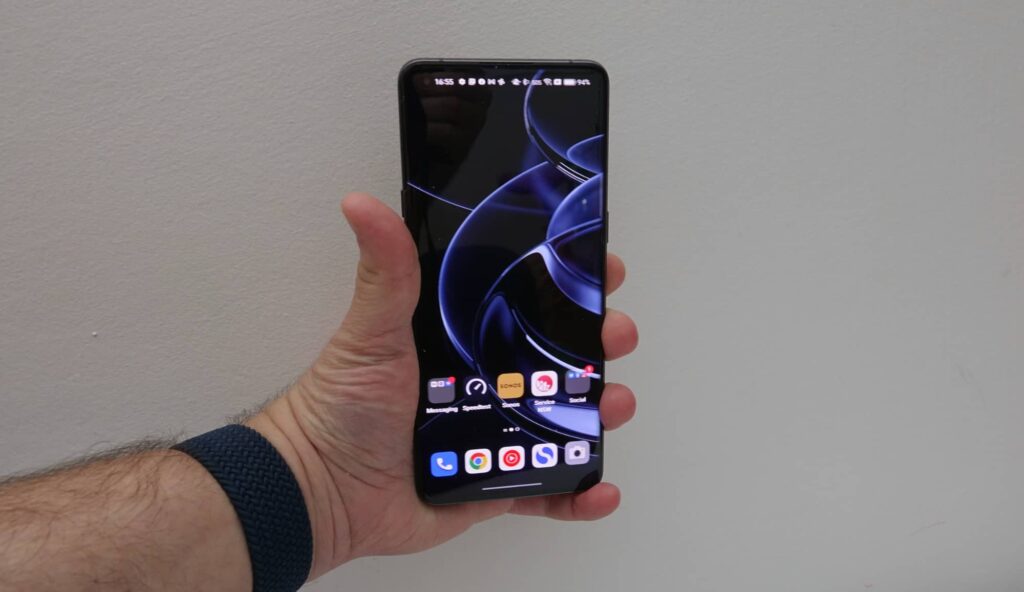 While the cameras are in desperate need of some tweaks and changes, the X5 Pro gets some of the way to being a top-end smartphone all the same.

There's a lovely screen, solid performance, and a great design in Oppo's Find X5 Pro. It's a phone that doesn't try to look like any other, making it a slick competitor.

We still think there are things that could be tightened, but if you're looking to stand out and still get an excellent phone in 2022, the Find X5 Pro can deliver. 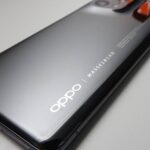