Laptops for kids are often cut-down compact machines, and the Dynabook E10-S is no different except for one thing: durability.

Finding the right laptop for back to school isn’t easy, but even if you have a guide to help you pick laptops for kids. Often there are similarities, with models in the low end arriving with modest specs for modest price points, and more or less building a computer made for a budget price point and not much more.

In that respect, Dynabook’s E10-S doesn’t change too much of the formula, with the $600 computer really focusing on students, or more specifically parents buying for students. Except for one important difference: it’s made to survive a little more than your typical laptop.

Simple and ordinary, the look of Dynabook’s E10 isn’t going to excite or tantalise, because it’s just about as “basic laptop” as basic laptops go. Offering black and grey plastic in a look that basically screams “unexciting”, the E10-S could well pass for a generic laptop in the most basic sense.

While the simple plastic design doesn’t really offer anything pleasing on the eye, it does come with something not many laptops offer: durability.

That’s a word you don’t typically see associated with computers, because when you drop a computer or accidentally spill some liquid on one, you can usually expect it to stop working, be it the whole thing or just one small part.

In the Dynabook E10-S, you might get lucky, thanks in part to that ordinary black plastic featuring rubber bumpers, a drop-tested body and frame, and a spill-resistant keyboard. Yes, it’s an ordinary looking computer, but it’s also a surprisingly durable computer, at that.

Inside, the tech isn’t going to blow your eyelids off, but it might just be enough for your everyday, provided you don’t need to do much. If you won’t be Photoshopping or playing games or really doing much more beyond writing, web surfing, email, and productivity, you might just get away with what’s inside, because there isn’t much.

An Intel Celeron N4020 set to 1.1GHz is the chip on offer, a dual-core chip and fairly low-end, paired with 8GB RAM and 128GB storage makes this geared at school students, but not a whole heap of other people.

You’ll find a decent selection of ports here, including two USB 3.0 rectangular Type A ports, one USB Type C port, an HDMI port, microSD card slot, a 3.5mm headset jack, and even an Ethernet port, covering a wide assortment of wired connections. In wireless, it’s about a normal assortment of WiFi and Bluetooth, the former of which is 802.11a/g/n/ac WiFi 5, while the latter is Bluetooth 4.2.

There’s an HD-only camera found above the 11.6 inch equally HD-only screen, and a version of Windows 10 on the laptop, as well, Windows 10 Pro Education. 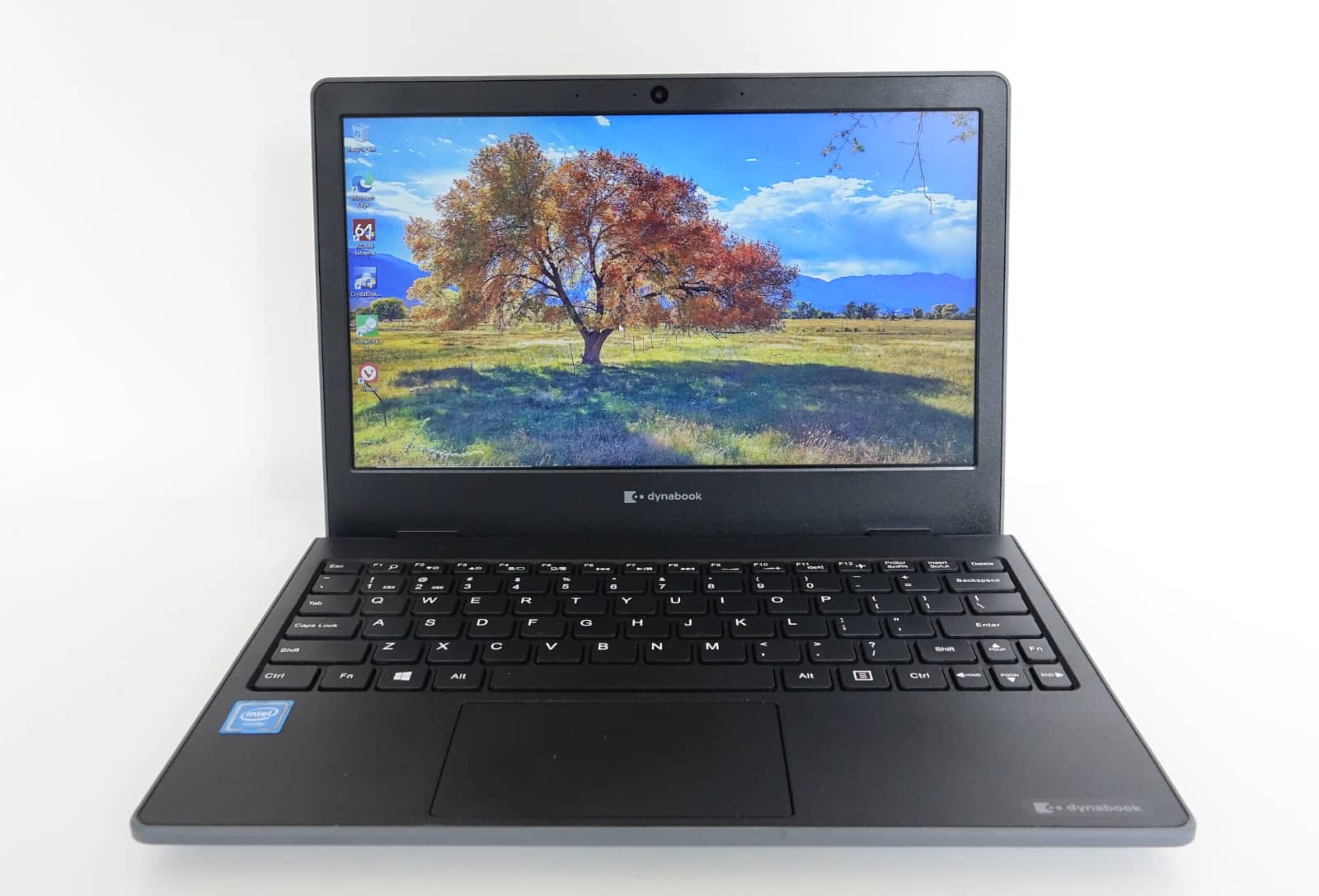 That 11.6 inch LCD can be seen as bright, though we wouldn’t call it a high quality screen, not by a long shot. While you might long for clarity and a razor sharp resolution, Dynabook is instead offering a maximum of 1366×768 on this older style of LCD, which in turn washes out at angles that aren’t dead on, and reminds us of laptops from several years ago.

Simply put the screen on the E10-S does a job of displaying information, and that’s all it really does. It doesn’t display information or graphics in a rather nice way, and overall feels like the sort of cheap screen you’d expect on a cheap laptop, and we’re pretty sure we know exactly the technology Dynabook is using for this model: Twisted Nematic, also known as “TN”. It’s a fast but cheap screen not normally seen on laptops these days, and known for use in computers keeping the price down. 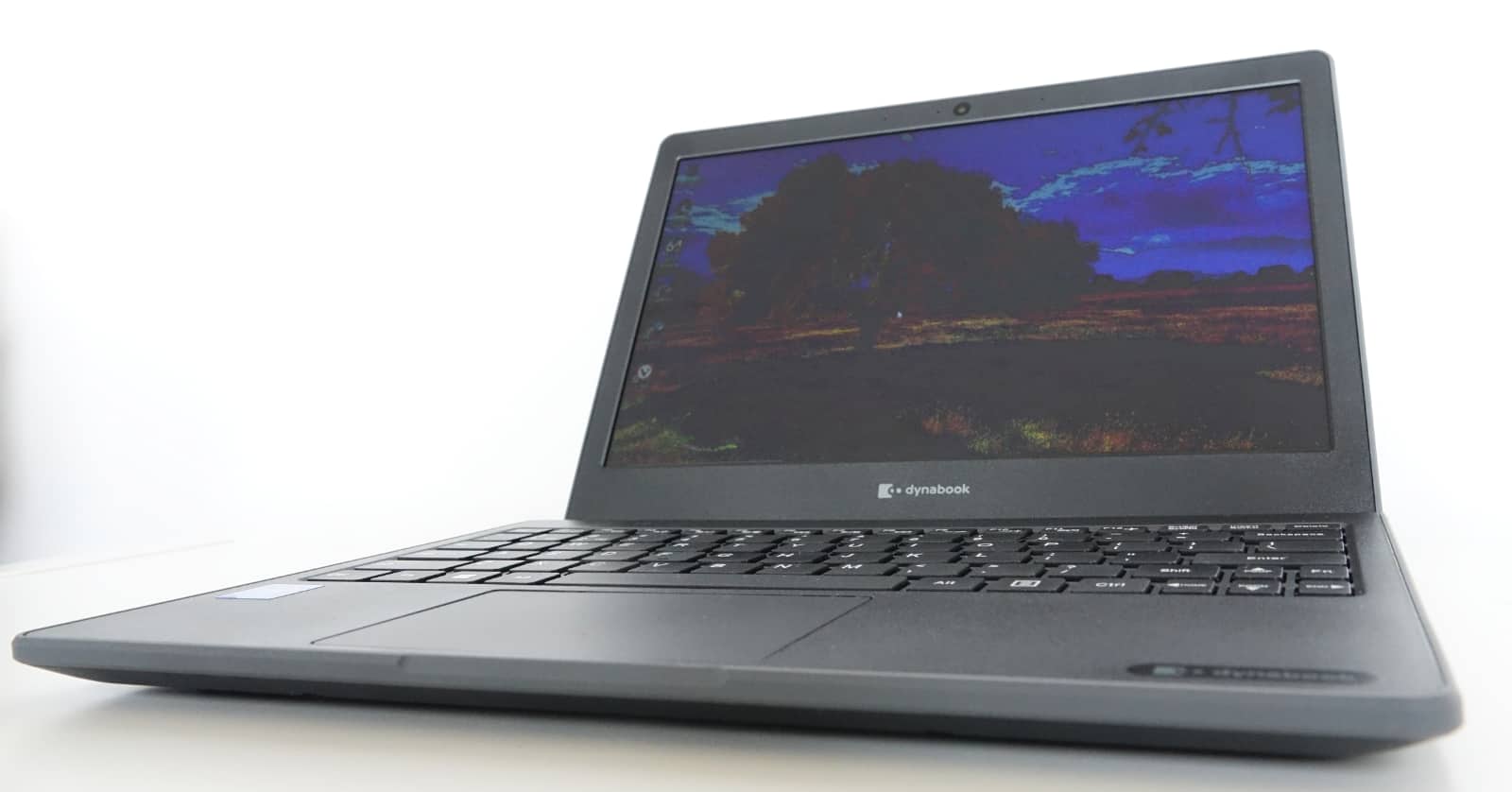 A cheap screen is married to a relatively cheap keyboard and mouse, with one better than the other, but not by much.

The keyboard is marginally the winner here, with the 11.6 inch screen providing only just enough room for a keyboard below, with Dynabook sacrificing the directional keys on the bottom right. There is some travel here on the keys, but the sound and feel is a plasticky clack-clack-clack you can’t escape, plus the feeling that one out of every 100 odd strokes will see a letter missing, especially if you’re a fast typist.

While the bones of Dynabook comes from Toshiba, and the quality of Toshiba’s keyboards has always been pretty decent, the E10-S feels quite cheap in comparison. Like the screen, it does the job, though also like the screen, you’ll long for something more.

Compared to the touchpad, they’re downright amazing. But the touchpad is less than fantastic. In fact, it’s barely usable. 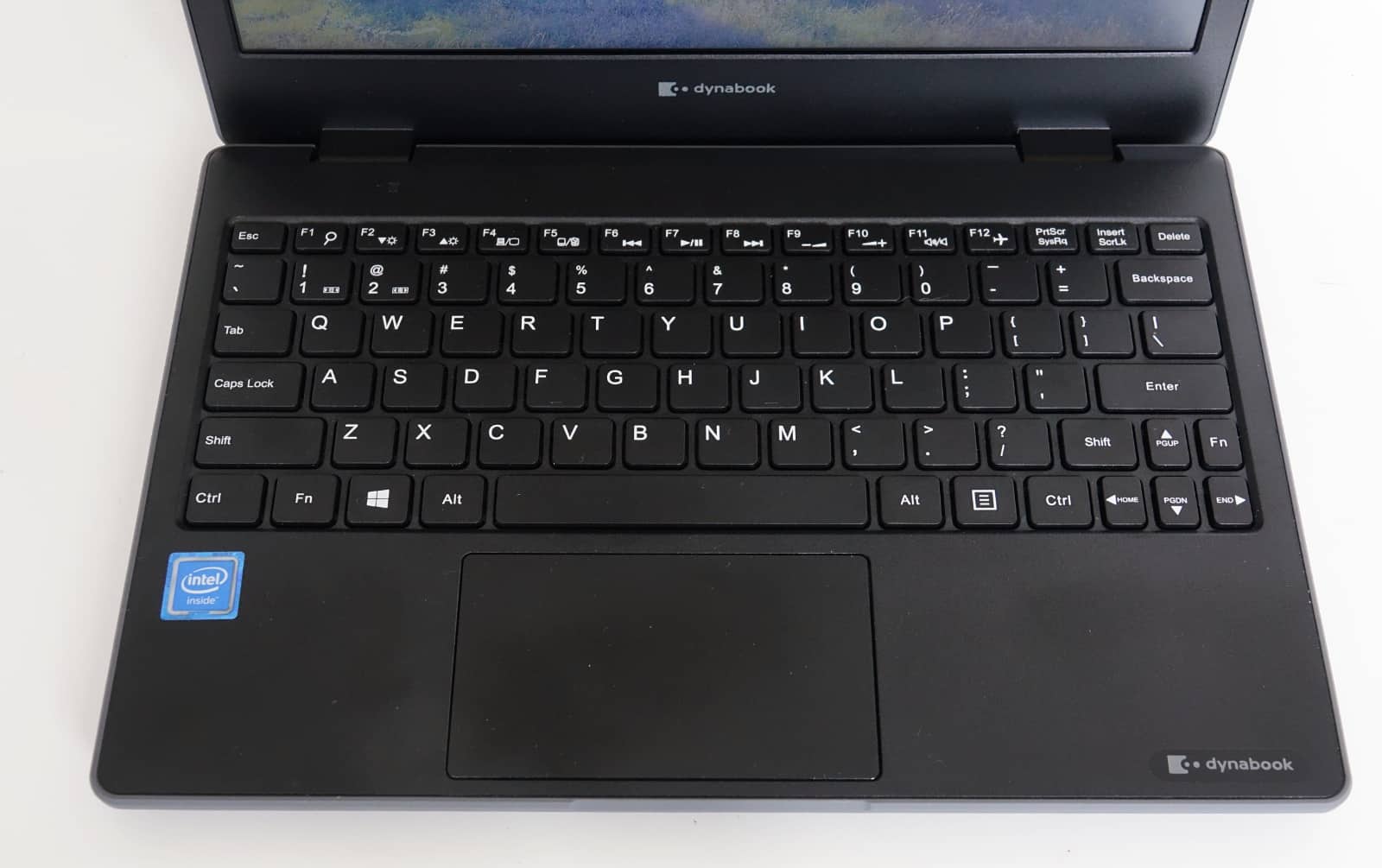 Even though the keyboard offers some degree of travel, the trackpad feels hollow and empty, needing quite a hard click in order to press that mouse button down, and not feeling great, at that. This was the first mouse in quite a long time where we’ve yearned to plug something in. Not just yearned to, but almost became desperate enough in the course of our E10-S review to find something else that does the job.

Anything. Any other mouse would do a better job than what you can find in this computer.

That combination of parts makes the Dynabook E10-S a little awkward to use at points, only because parts aren’t always as reliable as you might want. The keyboard is the better of these two, but losing letters meant fast typists won’t be happy, and the weird placement of directional keys on the right plus a shrunken right shift key means left-handed typists mightn’t be all that enthused.

But it’s certainly doable, provided you’re good with the performance.

Armed with an Intel Celeron, one of the super light chips from Intel, you probably shouldn’t expect the Dynabook E10-S to be a powerhouse, because it really isn’t. While it’s equipped with a good 8GB RAM, that’s really the minimum needed to make Windows run properly, and it doesn’t help much here.

You can run quite a few apps on this tiny laptop, but running them with solid performance isn’t really a thing. We found loading more than a handful of tabs caused the E10-S to slow to a crawl, with animations as we jumped between features in browsers feeling staggered in their execution.

Even installing apps slowed to a crawl, with one app being opened four times before Windows acknowledged one of the installs, and the remaining three install windows opened up, ready for action.

Benchmarks confirmed our thoughts and feelings, with the system really showing just how middling the performance really was. The Dynabook E10-S isn’t at all fast, even if it is portable and durable, which may well be the point.

Fortunately, the battery isn’t terrible for the size, though it’ll vary based on what you use it for.

We found anywhere between 5 and 10 hours of battery life was likely on the E10-S, making it more than suitable for a day of school, which is clearly where the computer is pitched.

You’ll find one of the old school circular plug packs here, but Dynabook also includes a Type C port on the side, and as expected, it works to charge the laptop up, as well. That’s handy, because it means you can top up the power on the E10-S in a jiffy simply because of how common Type C chargers are these days. Handy. 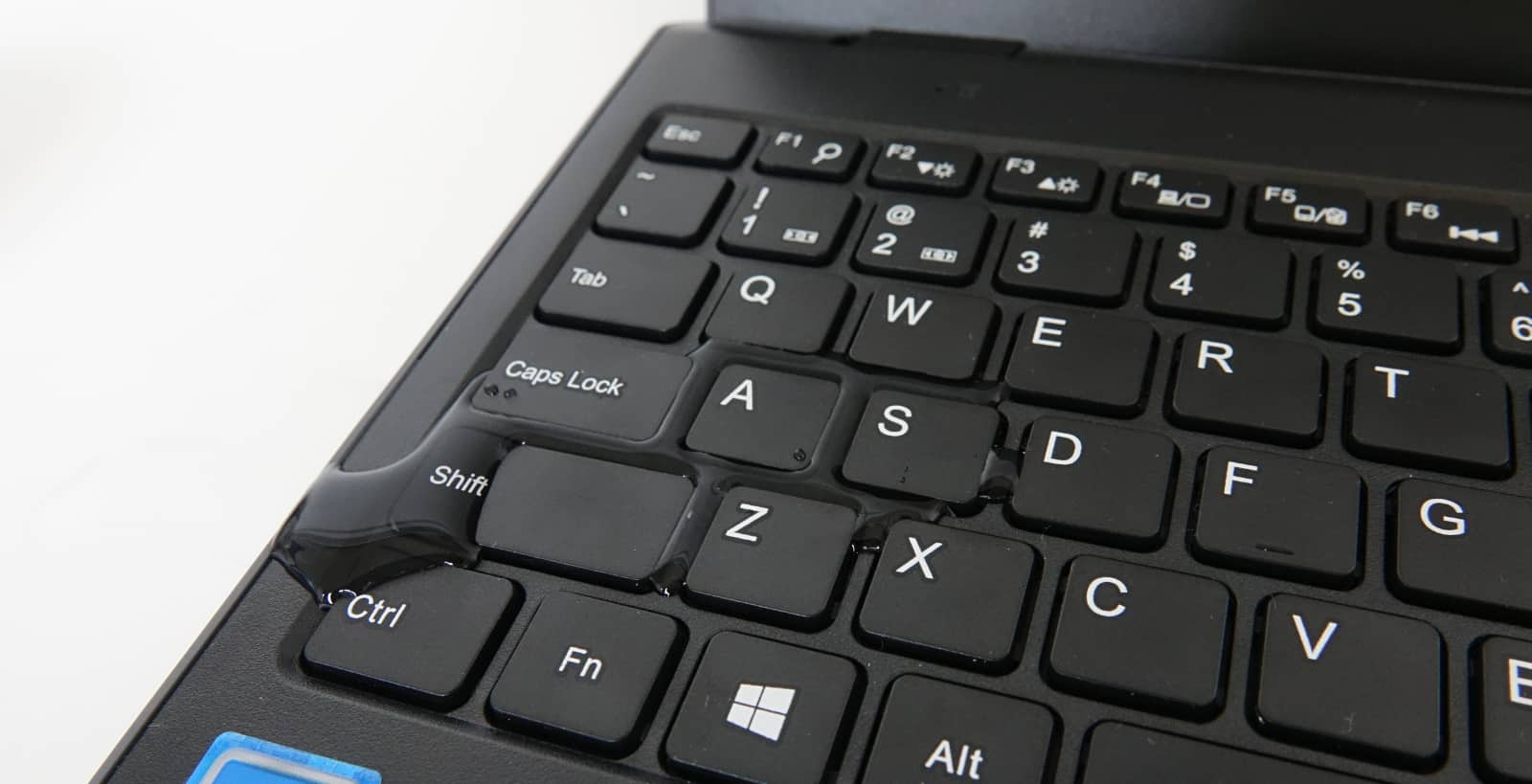 Priced at around the $600 mark in Australia, the Dynabook E10-S reads like a budget computer at a slight premium, simply because of that durability. The hardware spec isn’t amazing, but that ability to survive a fall or drop is, or even have a classmate’s bottle of water fall on the machine randomly and still work.

If improved durability is important, Dynabook’s inclusion of slight ruggedisation adds about a $100 to $150 price difference compared to other similarly spec’d 11 inch computers, even if this market is beginning to disappear.

As such, its value isn’t terrible, just be aware that the difference you’re paying for in this laptop versus others is quite literally the extra protection you’re afforded. That’s something not every compact computer offers, even if it’s something we can see parents and kids alike thinking will be a good idea.

Unfortunately, while the Dynabook E10 offers a position for compact laptops with a degree of durability delivered, the tech inside the laptop still needs some work, and may make you question why you’re buying the computer.

While parts of the computer are well thought out — things like the improved durability and port selection — other aspects come at the expense of that approach, and they may just be too much to sacrifice, at that.

Take the screen, which is so low grade, it’s not at all pleasing to the eye. Open it at a slightly different angle from dead on or change your sitting position slightly, and you’ll see the screen wash out, almost taking a solarised approach to showing text and images that is hardly good to view.

The mediocre screen isn’t a total surprise, and neither is the equally mediocre keyboard, which definitely isn’t a fan of proficient typists. Throughout our review period typing on this laptop, the occasional dropout of characters made for an awesomely fun edit job. And that mouse? Don’t get us started. It’s been years since we reviewed a laptop with a trackpad this meh.

Simply put, while aspects work, the main parts you need a computer for don’t, telling us that you’re basically buying the Dynabook E10-S to be durable, less usable. It’s almost as if the company is telling you to pick one, just not both, and we’re not sure that’s a compromise that should be asked. You can surely get both, you just can’t get it in this computer. 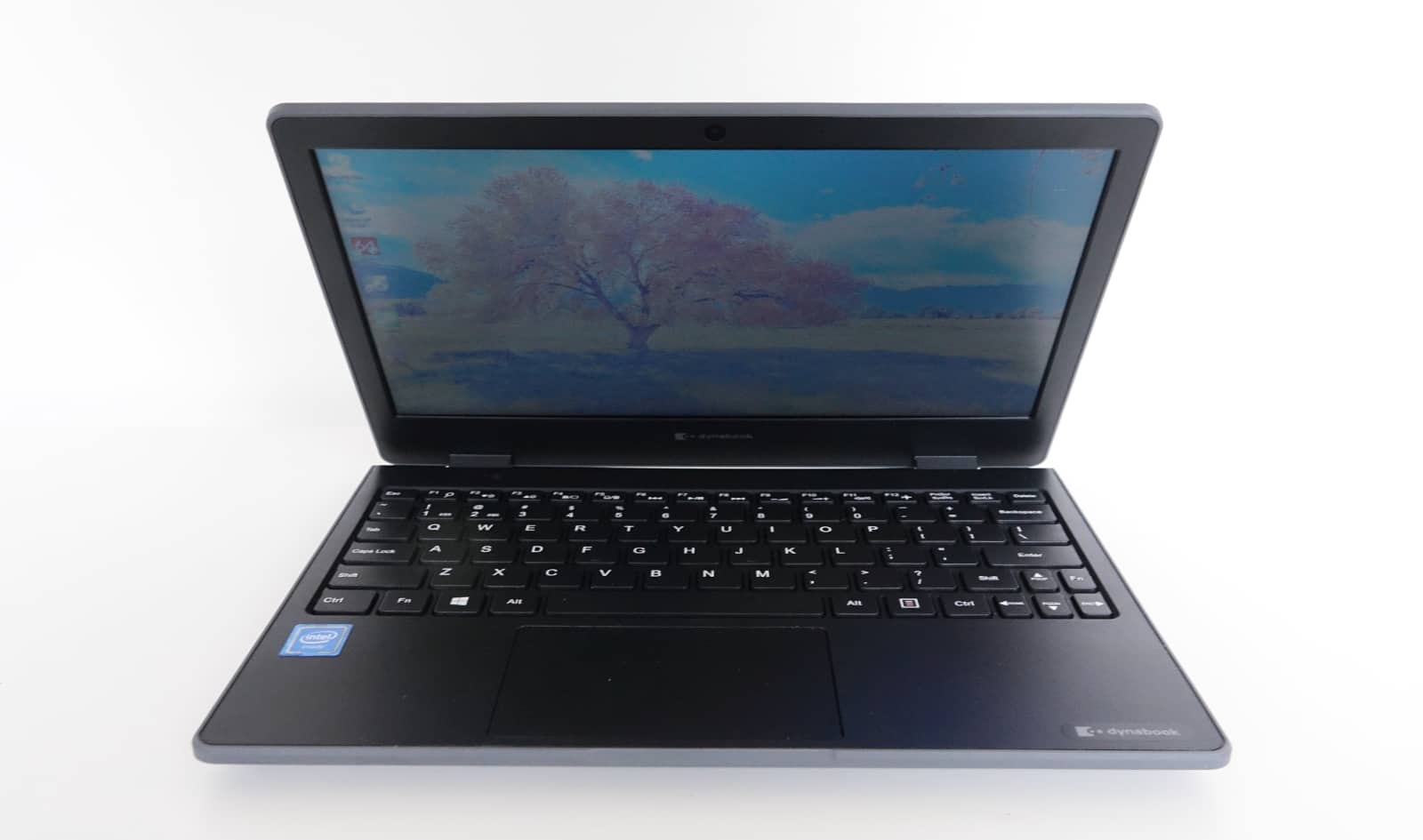 If your needs aren’t super strong beyond some light productivity, and you’re concerned about the long term durability of a computer, Dynabook’s E10-S could be worth a look, even if there are much better laptops out there, even for the price.

At around $600, you’re basically choosing the E10-S because it’s sturdy but basic. While that’s fine, we could perhaps suggest an alternate approach: pick a computer that’s better, and then buy a slipcase and treat it well.

However if you’re going to have a hard time convincing the kids to be good to a laptop, and you’d rather buy for longevity rather than quality, the Dynabook E10-S makes a case for itself. It’s not a great case, but it’s a case all the same. 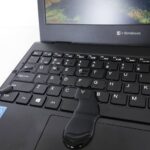 Dynabook E10-S
Features
Design
Performance
Ease of use
Battery
Value
The good
Perfectly compact for people who need something small
Offers a degree of ruggedisation and durability
Plenty of ports
Surprisingly strong battery life
The not-so-good
Performance is hit and miss
Screen is an older TN panel and doesn't look great at angles
Compact keyboard isn't a great experience
Trackpad mouse is hard to click
3.2